The Life and Work of P.B. Lawson

Pinckney B. Lawson was a native of Marion, Alabama, a lawyer and a successful preacher among the Disciples of Christ in Alabama and Mississippi. His preaching was largely that of an itinerant evangelist, filled with a zeal to reform the "sects." He wrote extensively for current religious magazines and kept them informed of the happenings in his native state. When Alexander Graham died, Lawson edited a book of his sermons together with an introduction and a biographical sketch.

In 1847, there appeared in the Millennial Harbinger, a letter from Lawson, in which he complained of the shortage of evangelists in his region.

.... For it seems to me that the brethren proclaimers hardly know that there are disciples in this latitude, and surely are not aware that here is one of the finest fields for good laborers in the whole South and Southwest. We have no periodical in this part of the country, and scarcely a proclaimer; yet we have an intelligent, honest, candid, thinking, and wealthy population. The people are disposed to be religious... Brother A. Graham has lived here some eight or ten years, preaching almost every Lord's day.
.... For several years previous to and for eighteen months after building, we numbered seven or eight members; among whom was brother Graham and lady and myself and wife... there are now in this place, and the immediate neighborhood, about sixty.

He continued his description of the conditions in Marion, reporting preaching trips and finished by requesting that some of the "proclaimers" came into the state to aid the cause. (Millennial Harbinger, Series III, IV, No. 12 (December, 1847), 711-713.) Commenting upon the situation in Alabama in 1848, John R. M'Call, one of the Disciples evangelists, wrote that "if there were a few devoted and able evangelists in South Alabama, in addition to our devoted brethren Lawson, Graham, Hooker, and Caskey, soon would this land of the South rejoice in the glorious principles of the gospel. (Ibid., Series III, V, No. 7 (July, 1848), 413.)

Alexander Graham died at his home in Marion, in 1851, and Lawson wrote his obituary and sent it to the Millennial Harbinger accompanied by a biographical sketch of Graham's life. The obituary was published but Campbell did not have space in the Harbinger to publish the biography. Lawson thereupon collected a number of Graham's sermons, edited them and included them in a publication with the biography. The work was printed (1853) in a ninety-six page booklet entitled The Life and Character, to which is added some of the Addresses and Sermons, of Alexander Graham, Teacher of the Christian Church, in Marion, Alabama, and sold for fifty cents per copy. (Ibid., Series IV, I, No. 6 (June, 1851) 359-360; P. B. Lawson, op. cit., Title page.)

With the help of Mrs. E. C. Lavender and "Aunt Elvirie," a negro slave cook in the Lavender family, Lawson was able to organise a church of seven members in Selma about the year 1852. From such a beginning, this church grew to be one of the most influential congregations in the state. John I. Rogers and P. B. Lawson were long its ministers, while Alexander Campbell, Jacob Creath, Tolbert fanning, and W. H. Hooker were among its distinguished visiting preachers. (J.W. Henry, op. cit,. III, No. 8 (April, 1906), 1,) That year Lawson also reported that Jacob Creath held a meeting in Marion during which Robert Graham, Baptist preacher and brother of Alexander Graham, was converted. Lawson's wife was also converted, although "raised by an excellent Scotch Presbyterian mother."(Millennial Harbinger. Series IV, II, No. 1 (January, 1852), 59.) In December, of the same year, Lawson, W. P. Kight, Bartlett Billiard, and Robert Graham were in a "co-operation meeting" at Fair Prospect in Montgomery County. Fifteen people made the "noble confession and were immersed. (Ibid.. Series IV, II, No. 12 (December, 1852), 717.) In September, 1855, Lawson, Kight, and Kirkpatrick held another meeting at Fair Prospect, resulting in twelve additions. Kirkpatrick reported that Lawson was "in the field and doing good service for our Lord and King."(Ibid., Series IV, V, No. 1 (January, 1855), 55.)

Alexander Campbell made a visit through Alabama in 1857, arriving in Selma on Saturday night of April fourth. He was met by P. B. Lawson, upon whose invitation he had come, R. T. Gorse and L. L. Rowland. On the following Wednesday evening they "went out to brother Lawson's, where we enjoyed several hours of social conversation." Lawson and his wife carried Campbell to Greensboro, and thence to Mt. Hebron where Major Berry entertained them. At the various places of their visits, Lawson also delivered sermons. Campbell wrote:

Our gifted brother Lawson spoke occasionally at night meetings during our visit in Columbus. He is one of our most edifying, interesting, and successful preachers, as I should judge from the discourses which I myself heard from him; and of which I had ample evidence at all the points I visited in Alabama, from the brethren, who narrated to me his labors, and success in the gospel. (Ibid., Series IV, VII, No. 8 (September, 1857), 502-507.)

In the 1860's a plan of national co-operation, which provided for district, state, and national missionary societies. The churches were to elect representatives to the district meetings, and the district meetings in turn were to send representatives to the state organization meetings. In the national meetings, there were to be representatives from the state and district organizations. The plan was adopted by the National Convention of Disciples of Christ which convened in Louisville, Kentucky, in 1870, and was known as the "Louisville Plan." The Disciples of Christ in Mississippi had organized their state society and called it the "Mississippi Cooperation Meeting."(Ibid., Series V, II, No. 3 (March, 1859), 180.) When the Louisville Plan came before the Mississippi Meeting in 1870, there was a heated debate over the plans. Lawson was in the meeting and took his stand with these in favor of this organization. The next year, from Marion, Alabama, under the date of November 18, he addressed the following communication to the brethren in Alabama, through the columns of The Christian Monthly:

At a meeting of Disciples of Christ this day. Resolved, that we most cordially and most earnestly invite the brethren throughout the State to meet with the congregation at this place on Thursday before the 2nd Lord's day in December next, in a general convention of the Christian Church for the State of Alabama.... the congregations in the state be requested to send delegates and such statistics as will enable the convention to ascertain the condition and wants of the churches.... all preachers in the State are especially requested to be present and as many from without the State as can conveniently come-- that it is the earnest desire of this church to consult with all ether churches in this State and with them to cooperate in adopting such scriptural ways and means for the spread of the gospel in Alabama, as their joint research may suggest. –P. B. Lawson, Elder, (Ibid., II, No. 11 (November, 1871), 51)

At this time Lawson was connected with the law firm of Lawson and Moore, which, according to an advertisement, were "Attorneys at Law and Solicitors in Chancery, at Marion," and would practice in "the Courts of Perry and adjoining counties." (Ibid., II, No. 5 (May, 1871), 239; ibid.. II, No. 10 (October, 1871), 479.) During the summer of 1871, he attended the State Meeting of the churches in Mississippi at Aberdeen, after which he went to a meeting at Pine Apple in Wilcox County, Alabama, where he preached in co-operation with Adams, Barnett, and Kirkpatrick. Commenting on conditions in that section he said:

Twelve years ago I organized a church at Pine Apple with seven members. There are now about one hundred. Brethren Adams, Barnett, Kirkpatrick and Jordan labor in that section and have quite a number of growing congregation. (Ibid., II, No. 7 (July, 1871), 322.) The same year, The Christian Monthly carried two articles written by Lawson upon the subject of "Christian Union." In these articles he raised two questions: first, "Is union among all the followers of our Lord and Saviour desirable?" and the second questions "Can such a union be consummated?" His answer, of course, wag in the affirmative for both of these questions and. his reasons were the stock arguments used by the "Reformation" preachers in proclaiming unity. (lbid., II, No. 2 (February, 1871), 55-55; ibid., II, No. 3 (March, 1871), 104-107.)

In 1874 he was laboring at Pine Apple, Gasket Bottom, Dublin, Plantersville, continuing his evangelistic work, while keeping up his practice of law at Marion." (The Southern Christian Weekly, III, No. 15 (Mountain Home, Alabama, October 7, 1874), 345-346.)

Richard L. James, The Disciples Of Christ In Alabama, 1830-1860, A Dissertation Submitted to the Faculty Of The Divinity School In Candidacy For The Degree Of Bachelor of Divinity, Chicago, Illinois, March, 1937, pages 66-71

The Apostolic Times Report of the Death of The Father of P.B. Lawson

Directions To The Grave Of P.B. Lawson

P.B. Lawson is buried in Marion, Alabama in the Marion Cemetery. The town of Marion lies about 80 miles NE of Montgomery. Head west out of Montgomery on Hwy. 80. Go through Selma and continue west on Hwy. 80. About 12 miles out of Selma turn north (right) on Co. Rd. 45. Go about 15 miles to the town of Marion. Go to the center of town and turn right on E. Lafayette Street. When you come to Judson College will be on your right and the cemetery on the left. The Lawson plot will be close to the road, and very near his old friend and fellow preacher, Alexander Graham. 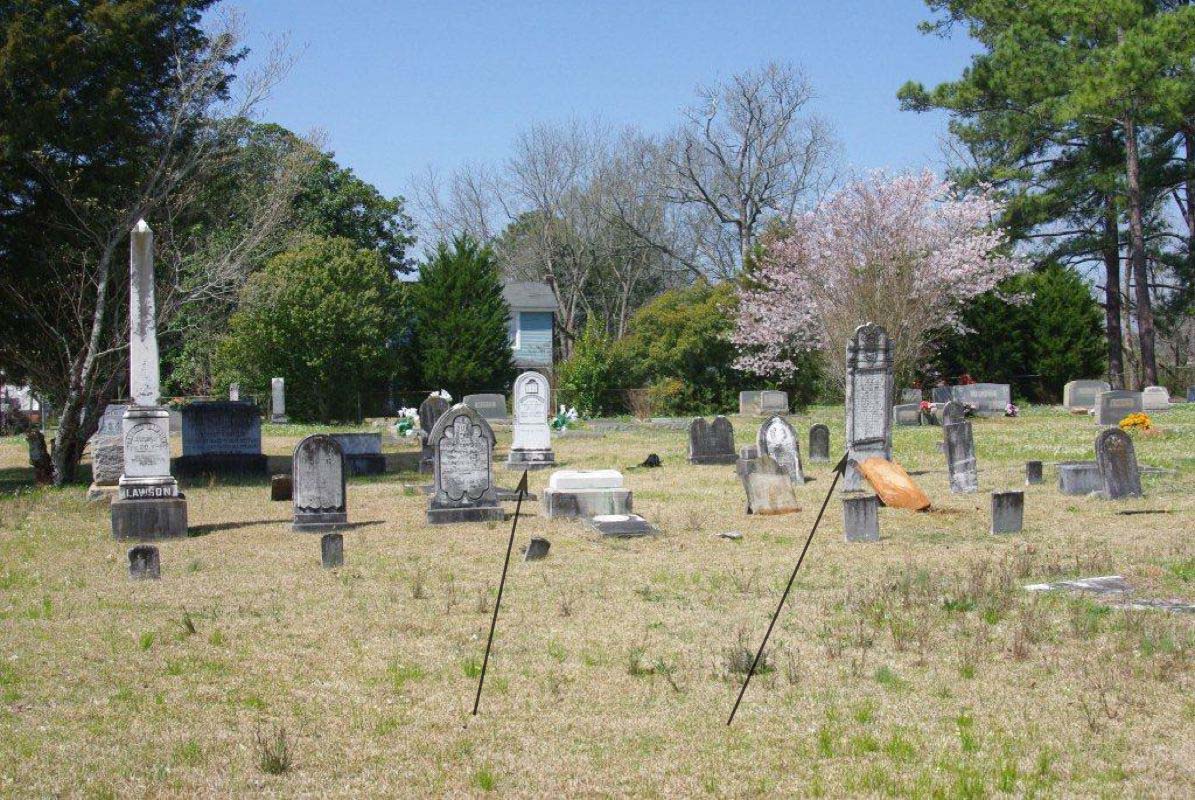 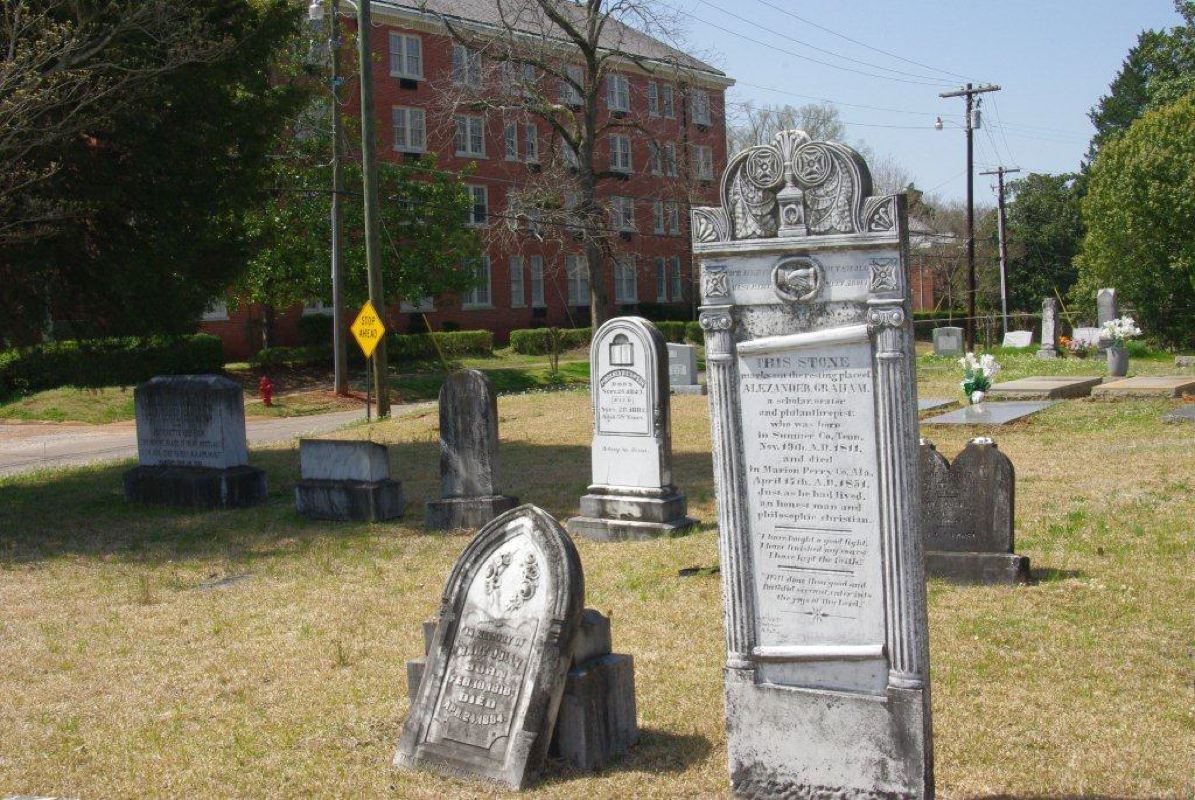 Alexander Graham In Foreground, P.B. Lawson In The Distance 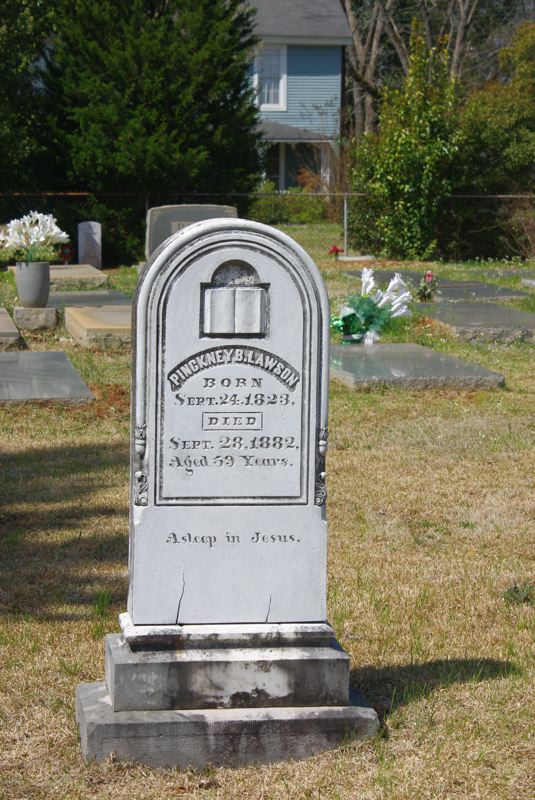 Special Thanks to Wayne Kilpatrick for sending in photos and information on the life and work of P.B. Lawson. 04/2010