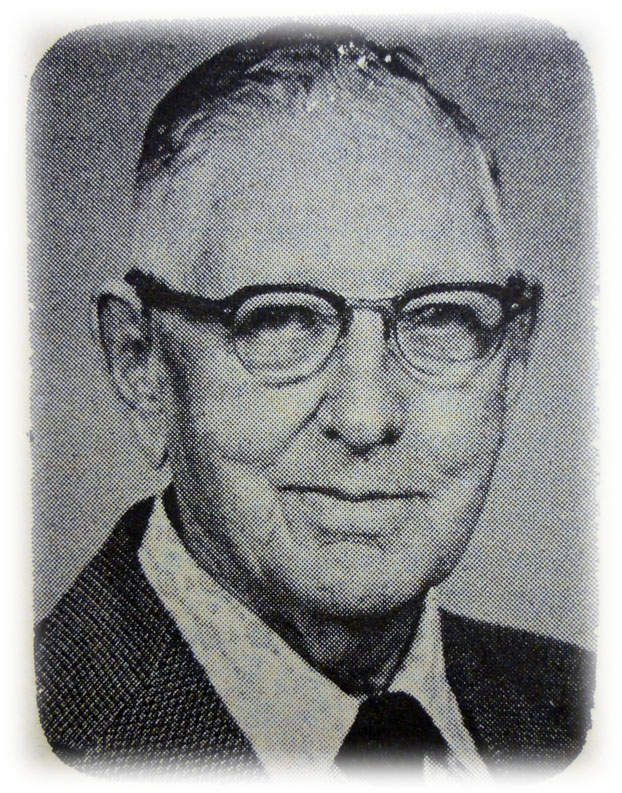 Veteran gospel preacher, George McCorkle passed away on December 25, 1979 and was laid to rest at the Pine Hill cemetery in west Lauderdale County, Alabama, on December 28.

Two funeral services were held. The fit was conducted in the meeting house of the Chisholm Hills Church of Christ in Florence, where brother McCorkle and his wife, sister Mary, attended for the past several years. Brother Curtis Hall, minister at Chisholm Hills, preached at this service and Fred Dim led a prayer. Ellis Coats was scheduled to speak at this service, but was forced to 'decline because of illness. The second service was conducted at Pine Hill. Brother Fred Bevis, a long-time friend of the McCorkle family, sang the Lord's prayer. Fred Dillon and this writer preached in the final service at Pine Hill. 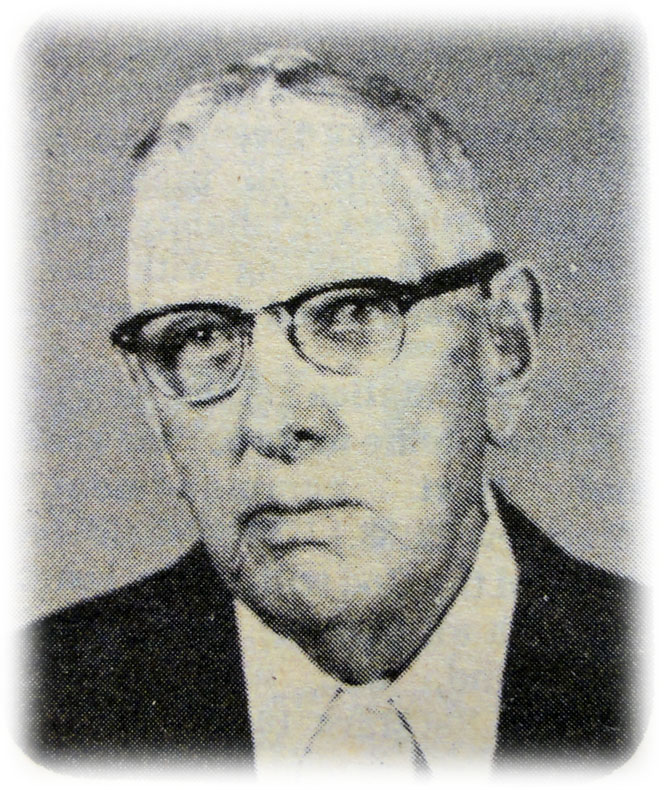 Brother McCorkle was born May 29, 1889, near Florence, the county seat of Lauderdale County, Alabama. His father passed on before George was born, and his mother was called away by death when he was only ten. In his early teens he went to Texas. At age seventeen, brother George won a state cotton picking championship by picking 845 pounds in eight hours and thus set a record that probably still stands.

In his early years, McCorkle roamed the west, including Mexico and the wild lawless Indian territory. In this period he broke wild horses to ride, rode in a wild west show, and had many interesting experiences.

George McCorkle obeyed the gospel when he was about twenty-five years of age. He began preaching the same year (1916) and never stopped until his death. After preaching much in the West, brother McCorkle returned to Florence in 1935.

His first meeting in Lauderdale County was at Hendrix Chapel and resulted in twenty-seven baptisms. From that point on the calls for meetings were so numerous he could not keep up. No records were kept of the hundreds who were baptized in those early years. By his efforts weak churches were strengthened and new ones were started in many places. At least nine churches were started in Wayne and Hardin Counties of Tennessee and in Lauderdale County, Alabama. (Weeden Heights, Stewartsville, Bethel Berry, Pine Hill, River Bend, Bevis School, Mt. Hope, Second Creek, and Walnut Grove.)

Throughout most of this time brother McCorkle supported himself by farming or engaging in business. In preaching he went where the opportunities called. He preached often in homes, school houses, backyards, brush arbors and under a tent when one could be found. For one period of two years brother McCorkle was supported by the Fourth Street Church in Tuscumbia, Alabama, to work in Colbert County. The work was the same. He labored with struggling churches and taught, preached, edified, organized, counseled, and did good among the churches in Colbert County. With the exception of this one period he did all his work with no assured income other than the amount he could count or from his small farm or other business.

TRIPS TO WASHINGTON AND THE HOLY LAND

There is much that has never been reported. He preached and established churches from Arizona to Ohio. In his late seventies he was called to Washington to testify before a congressional committee investigating the needs of small businesses. In his early eighties (1972) brother McCorkle made a thrilling trip to the Holy Land. In his late eighties he and sister Mary were still active in visiting hospitals, nursing homes and shut-ins.

A SOUL WINNER TO THE END

When brother McCorkle was in his eighty-eighth year I called him to go and help restore a discouraged, wayward brother. He was glad to go and taught me a lesson about soul winning that I shall never forget. Even at eighty-eight he maintained the unerring instinct for the right word and the right scripture at exactly the right time. Because of him our mission was successful.

Following the funeral service brother McCorkle's body was laid to rest just a few yards from the Pine Hill church building. It seems entirely fitting that the old soldier is buried about one mile from the place of his birth and almost in the shadow of a building he helped erect with his own hands.

SONS IN THE GOSPEL

Sister McCorkle and the family are joined by throngs of people who mourn his passing. Sister Mary will soon be moving to Celeste, Texas, and her friends wish her well in her new home. In a beautiful letter dated February 10, 1960, brother Landon Saunders wrote for many of us when he said, I like to consider myself one of your sons in the gospel."

Charles Coil, World Evangelist, February, 1980, page 12 (Note: This is a timed piece. Many of the post-death facts have changed.)

Directions To The Grave of George H. McCorkle 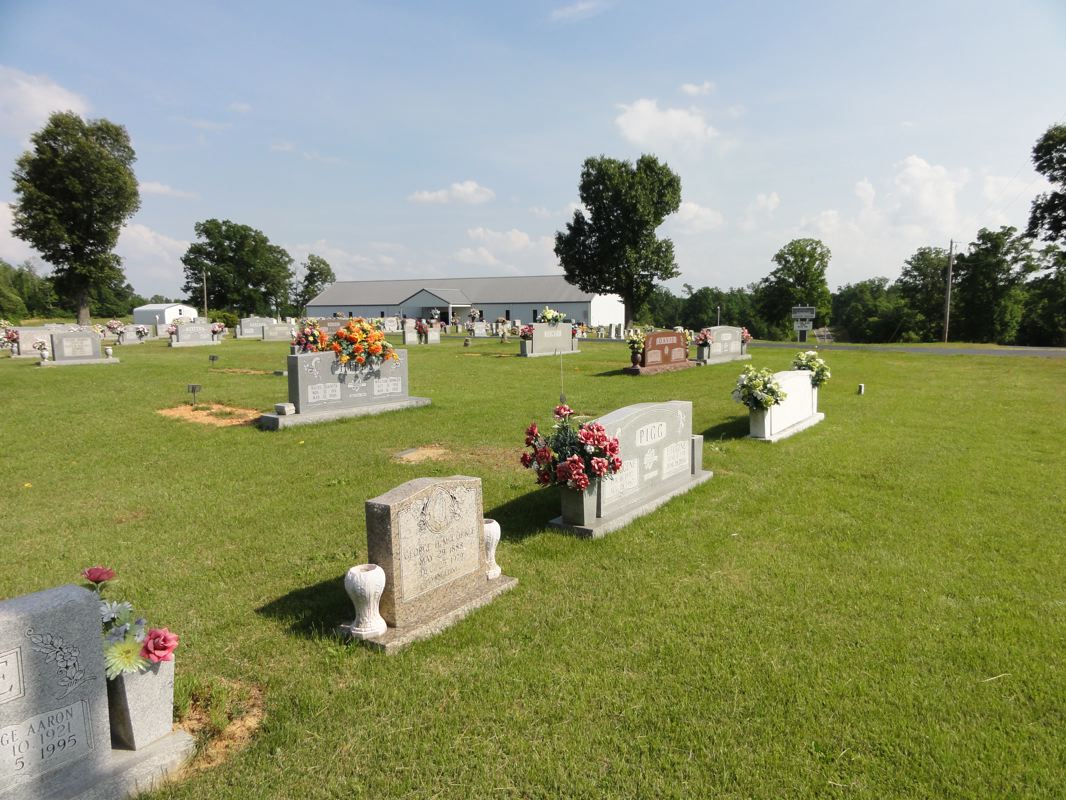 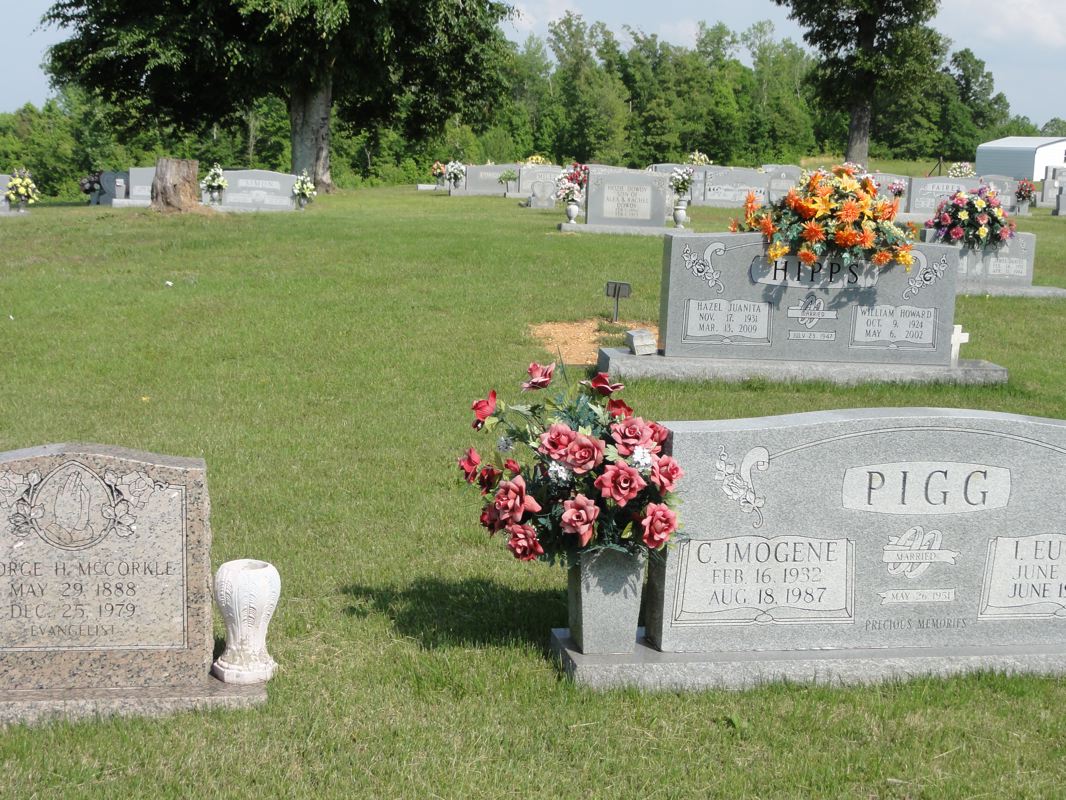 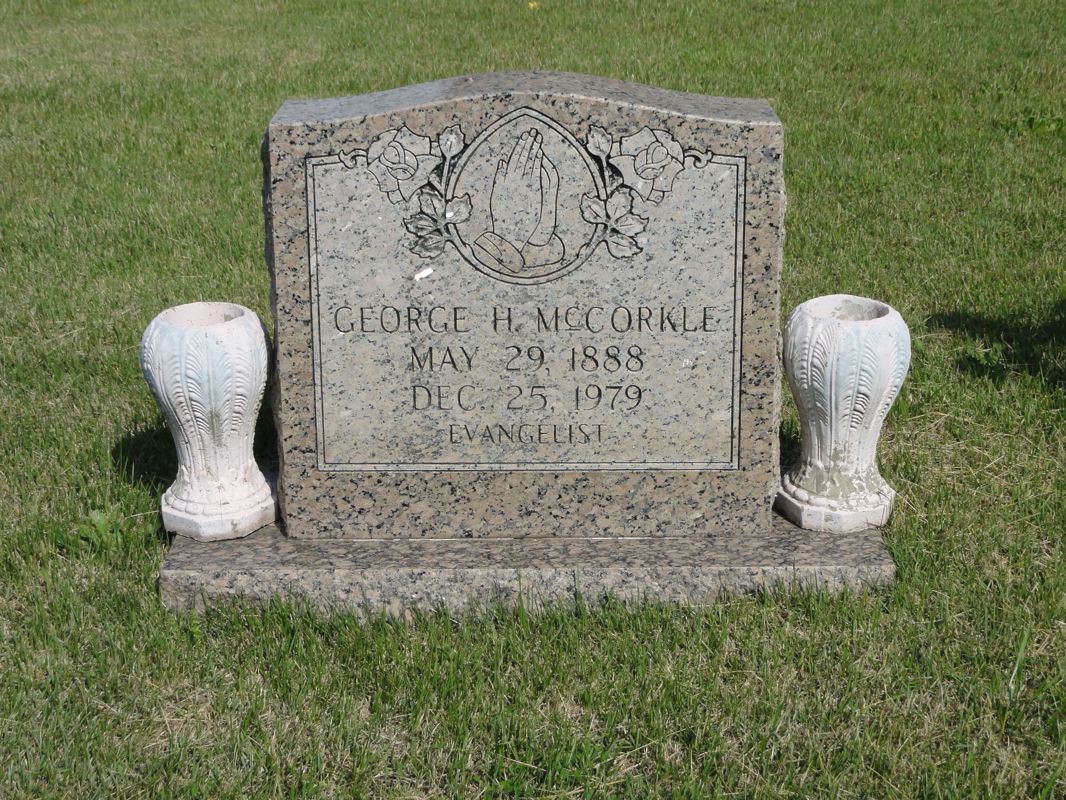