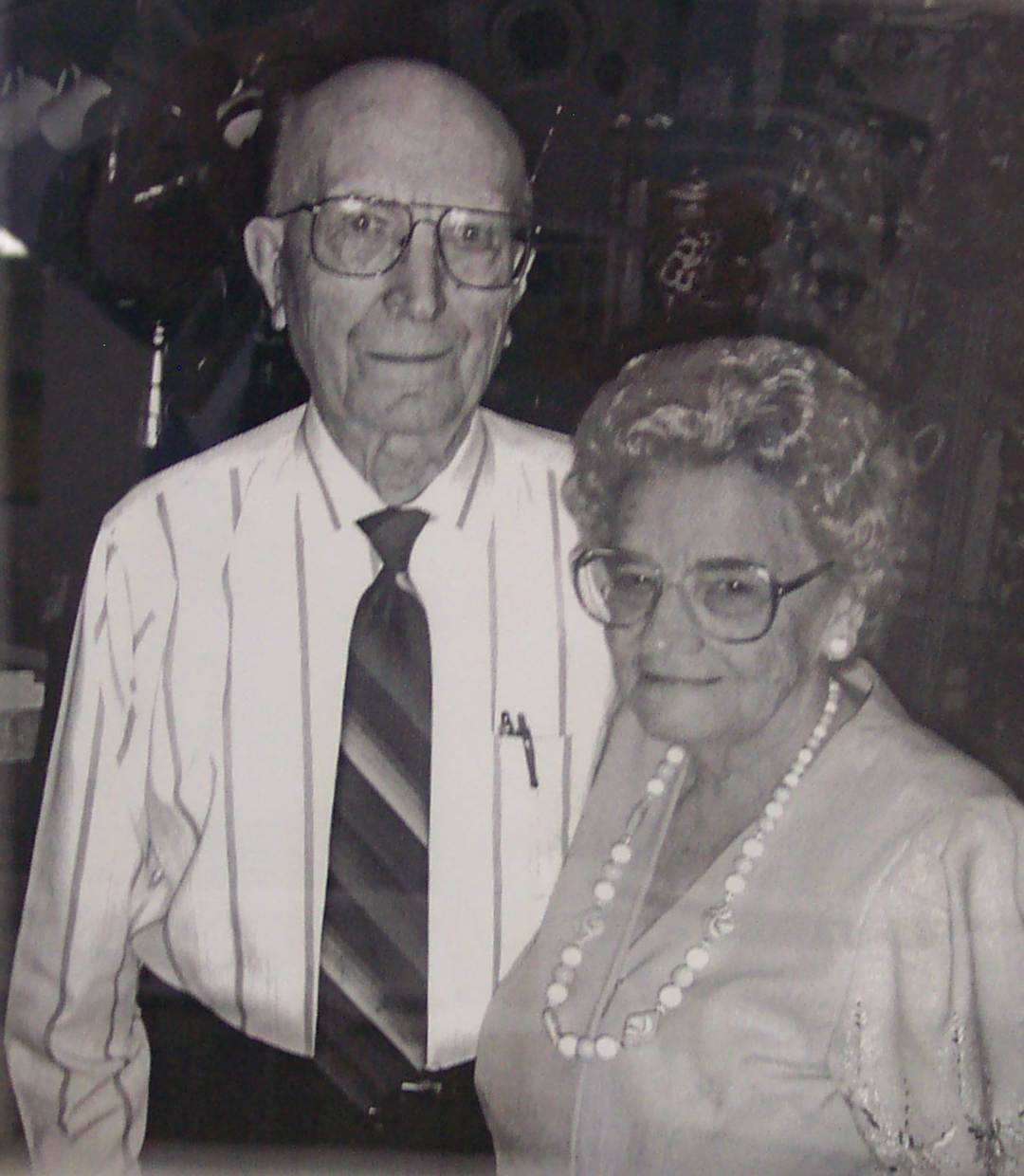 The Alexander family has for generations been a solid force for the ancient order of things in southwest Arkansas. The Gospel Light Publishing Company is the brainchild of Grady Alexander, longtime minister and proclaimer of the gospel of Christ. It has been in operation since 1930. Subsequent generations of the Alexander family continue to publish books, tracts, the Gospel Light Magazine, and other Restoration Movement based material.

Grady and his wife Mary are buried in the cemetery at the Church of Christ. Not to far from their graves is the grave of their son, Flanoy.

Flanoy Alexander, A Publishing Teacher Of The Word

Flanoy Alexander, age 87, of Delight, Arkansas, long time editor and publisher of the Gospel Light, departed this life May 5, after a brief illness.

From the perspective of this writer, he was Dad - and shall henceforth be called that in this tribute.

Dad was the son of the founder of the Gospel Light, Grady Alexander. With the help of J. A. Copeland who would later become Dad's father-in-law, the magazine became a reality in 1930, just as the country plunged into economic depression. Despite predictions of failure, the magazine has continued for more than 70 years.

In 1939, Grady, though a relatively young man of 48 years, suffered heart failure following complications from surgery, and died unexpectedly. Dad, at age 25, the oldest of two sons, was thrust into responsibilities of caring for his mother, his own growing family, plus business responsibilities inherent with production of the Gospel Light and, a weekly newspaper, The Pike County Tribune. The family's printing plant produced both publications plus doing commercial printing. Not many months after Grady's death, World War II began, calling Dad's brother, Burnham, into the military and adding to Dad's home responsibilities. The days were not easy for a lad in his mid twenties.

J. A. Copeland served Dad well in those years in both editing the Gospel Light and in an advisory capacity. (Dad had married one of Copeland's twin daughters, Joy.) Copeland, a well known and respected preacher in southwest Arkansas as well as parts of Texas and Oklahoma, served as editor until he was sure that Dad had the maturity and wisdom to assume the responsibilities. Dad served as editor and publisher until he was ready to give the task to me in the 1960's. My son, Brent, becomes the fourth generation in publishing the Gospel Light and in managing the business of Gospel Light Publishing Company and Alexander Printing Company. Plans are being made for further expansion of the operation - plans that we had hoped to be reality in time for Dad to see them. It was not to be.

For many years Dad served as an elder in the Delight Church of Christ. A capable, self-taught Bible scholar, he regularly taught Bible classes before relinquishing that to others in his later years. He was able to open the Scriptures and present their meanings in a simple, yet forceful, way.

In the community of Delight, at various times in his life he served as mayor, postmaster, fire chief, and president of the cemetery association, as well as being involved in many community activities.

Dad was a man of many talents. As a teenager he became interested in electronics, buying and selling radios - and eventually teaching himself to repair them. He learned the principles of electricity early and as a youngster wired many houses in the community of Delight in anticipation of the time electricity would come to town. The printing operation had installed a Delco generating system before electricity was available in Delight. Electronics continued to be an avocation of Dad's for many years, as he sold and repaired radios and appliances. Especially during the War years, Dad worked evenings in the printing and publishing office and then Friday evenings and Saturdays he devoted to his electronics business.

When anything new electronically came on the market, Dad was one of the first, if not the first, in the community to have one: radio, wire recorder, tape recorder, FM receiver, television, CB radio, and computer. His curiosity about how things operate led him to learn the technology involved in most of them, though when color television and, computers came on the scene, he was satisfied to enjoy them rather than work on them. His computers furnished him many hours of profitable pleasure the last few years of his life.

Other things he also learned through experience. Several buildings in Delight he was instrumental in building, including the Delight church building, which he completely renovated around 1960. Photography provided him much pleasure. He taught himself welding. No machine in the printing plant provided too much challenge if he decided to overhaul it. Some equipment used even now, he designed and built himself.

In the later years of his life, he always enjoyed the weekends either of the "Searcy kids" (Harold or Lynn and their families) came home. It seemed that always when Harold came, he felt he needed to have a "project" to work on a building to paint, car to overhaul, yard work to do, equipment to repair. And some of his happiest times during his eighties were when he and Harold got "down and dirty" doing his projects on Saturdays.

A few weeks ago when Dad was being admitted to a hospital, one of the many questions asked was about his educational attainments. Because of his weakness, I answered for him that he had a high school education. Then, in his presence, I added, "He also has a Ph.D. in the University of Hard Knox." As I glanced toward him, I saw a smile come across his face - perhaps the last time I saw him smile.

In his prime, Dad had the rare ability to face almost any problem or any situation, analyze it, see its repercussions, and make a proper decision or find the best solution. A combination of outstanding knowledge and wisdom seldom blends in one person. In Dad it did. He was firm in his decisions (sometimes we thought it almost hard-headedness), but usually time proved him to be right.

Dad's family considered him a great man, a servant of the Lord, a servant of his fellowman, a lover of his family, especially the babies and the little children. But he was a humble man, never boasting of his accomplishments, and never seeking the accolades of men on earth.

He is greatly missed, and shall continue to be, by his church, his community, and, especially, his family. We loved him, respected him, and learned much from him. There will never be another Flanoy Alexander.

Survivors include his devoted wife of almost 67 years, truly the "joy" of his life, Joy Copeland Alexander of Delight; two sons, Wallace Alexander of Delight and Harold Alexander of Searcy, Arkansas; one daughter, Lynn England of Searcy; eight grandchildren and nine great-grandchildren. Funeral services were conducted in the Delight church building May 9, with family members conducting the service. Brief talks were made by Harold Alexander, Don England, and Wallace Alexander, plus reminiscences presented by some of his grandsons and grandsons-in-law. A grandson, Scott Alexander, led the singing. Burial service in the Delight cemetery was conducted by grandsons and grandsons-in-law, and the same served as pallbearers.

The entire family is grateful for every kindness that has been shown by so many people during this difficult time. May God bless every one of you for all the help and encouragement that has been given in so many ways.

-This obituary appeared in The World Evangelist in December 2001, on page 18.

Location Of The Graves Of Flanoy And Grady Alexander

The Alexanders are buried in the city cemetery in Delight, in southwest Arkansas. Take I-30 to exit 46 (Hwy.19) and head north on Hwy. 19. Travel about 15 miles, staying on Hwy. 19. When coming into Delight, you will see the church of Christ and cemetery on your right. Enter the cemetery and head to the center. See pictures below to get perspective as to location in the cemetery. 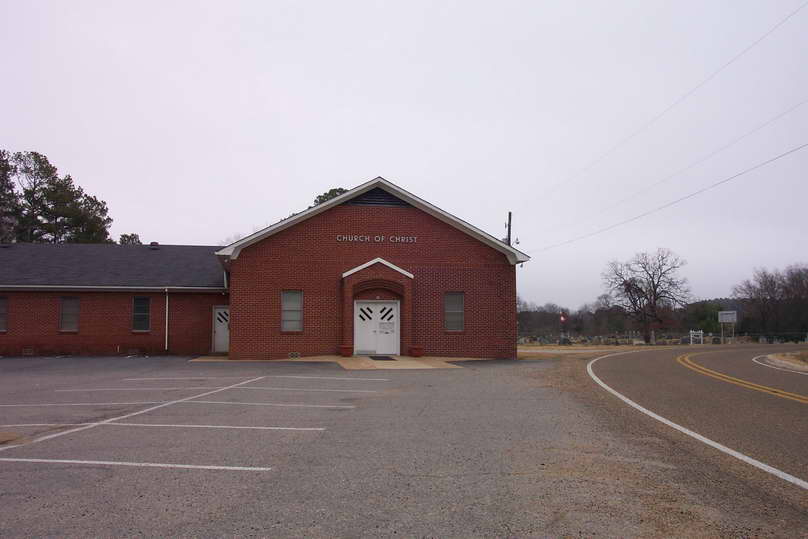 Delight Church of Christ - Church Home Of The Alexanders For Generations 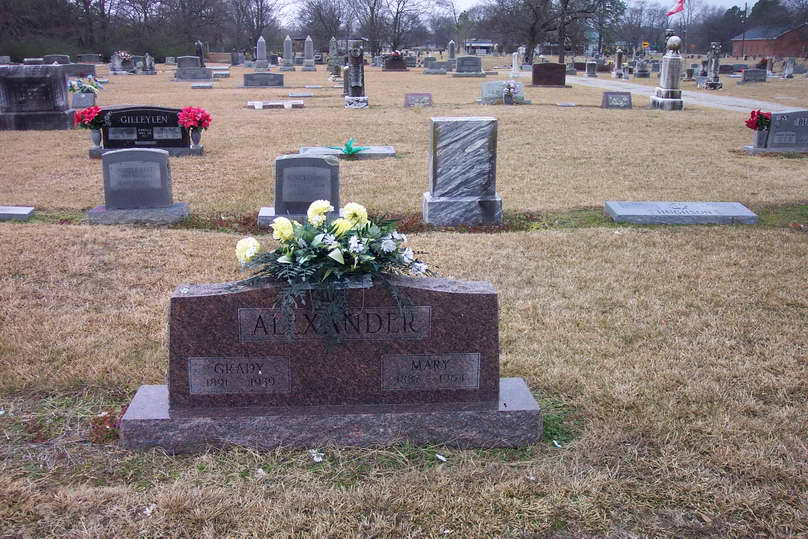 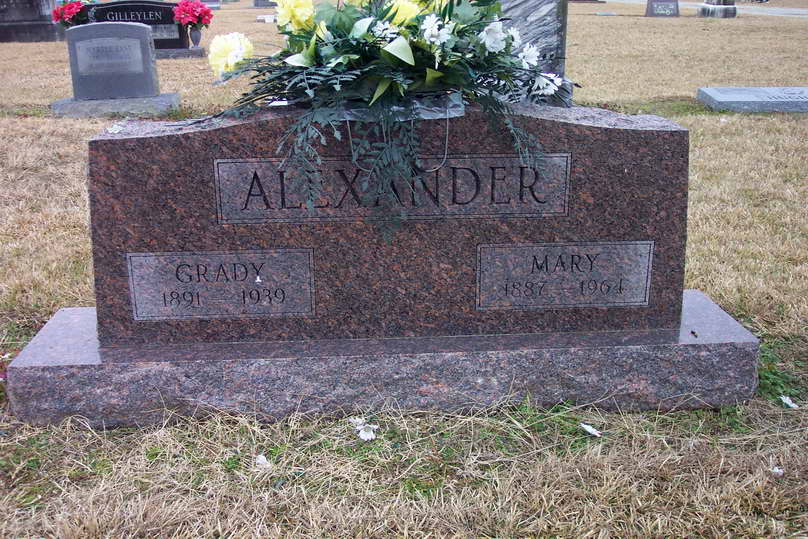 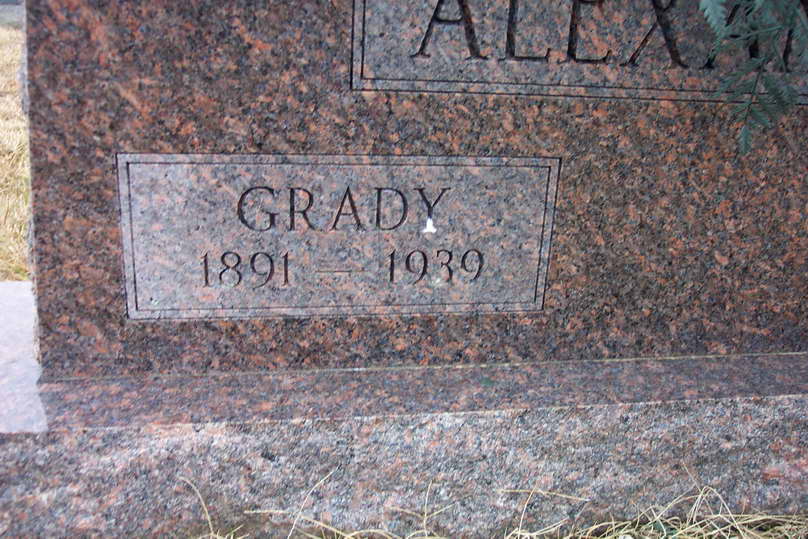 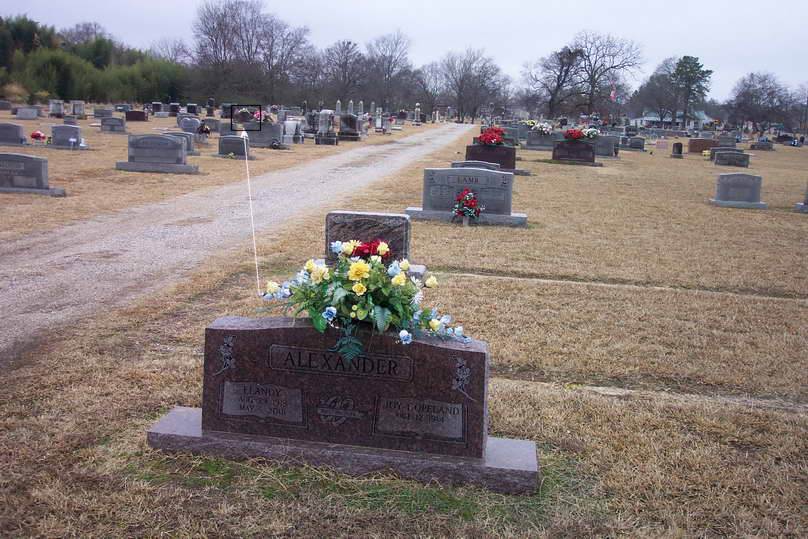 Location Flanoy Alexander, His Father's Grave In The Distance 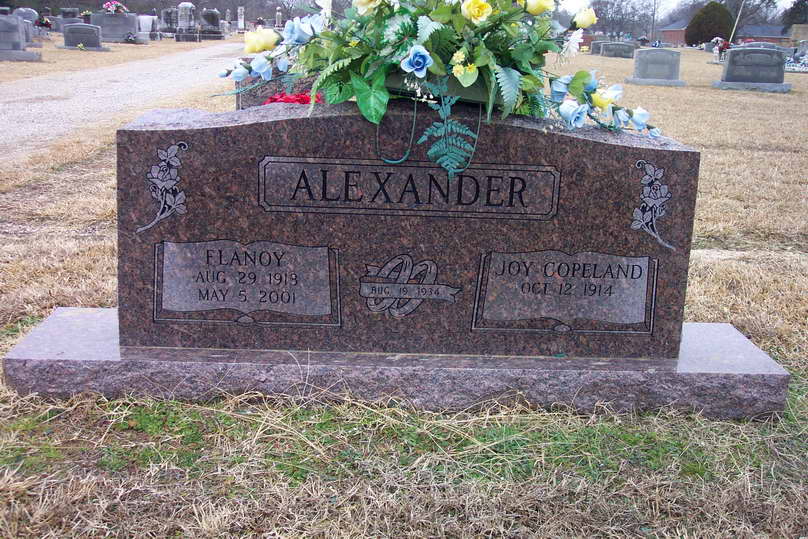 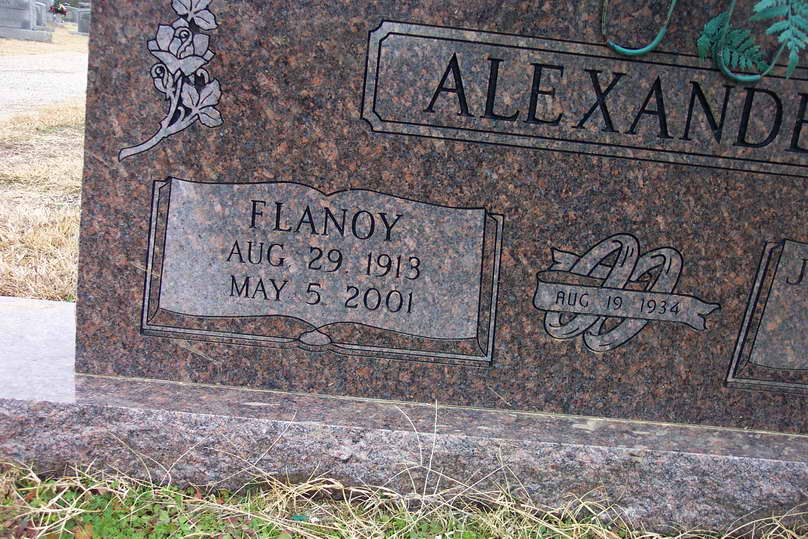