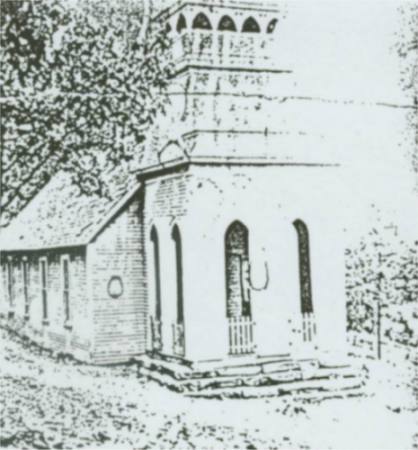 History Of The Church Of Christ At Coal Hill, Arkansas

One hundred years ago in 1885, the James H. Srygley and some 60 to 70 other families migrated from Northwest Alabama to Coal Hill, Arkansas.

The names of "the other" families are not available because no records were made of them. The ones that we do know, handed down from one generation to the next, and from personal recollection are as follows: two other Srygley families, two Coats, five or six Flake, three Sams, two Sandlin, three Wallis, one Morgan, three Quillin, one Kimbrough, one Mayhall, one Miller, one Linsey, one Oden, two Blankenships, four Hill, and one Sexton.

The communities from which these families came are Rock Creek, Barton, Cherokee, Sheffield, Tuscumbia and others from Northwest Alabama. The one person responsible for this movement was F. G. "Bud" Srygley. He was the land agent for the Iron Mountain Railroad. His job was to see about the right-of-way for the railroad and all the sixteenth sections that the U. S. Government gave to the railroad. It was the policy to give a railroad all the sixteenth sections from a strip of land 5 miles on each side of the right-of-way.

When Mr. Srygley got to Coal Hill, he thought it was the place he had been looking for. He and his father-in-law, Mr. Oden, formed a land company and bought all the east end of Coal Hill and a strip of land running north to the north boundary of section 16.

He returned to Alabama and persuaded all his father's family and as many of the relatives and some others to come to this new found "promised land."

The first thing this group of people did when they settled in, was to look for a place to worship. They made arrangements with the school board of the "Old Prospect" district for use of the school building for a meeting place. This went well for a while but some of the natives became unhappy because they did not want this bunch of "Campbellities" from Alabama using their school house.

That caused the newcomers, most of which were members of the Church of Christ to decide to build a building for church purposes. Again, Mr. Bud Srygley came to the front and donated a plot of land just north of where Johnny Muldoon recently built a new home. This piece of ground is approximately 100 yards north of the Troy and Onella Flake home and on the east side of the road that at one time went up the hill.

If you refer to the picture section you will find a picture of this building. It is the number one building. It was built in 1887. It served as the place of worship until about 1905 when it was struck by lightning and burned to the ground.

The congregation arranged to meet wherever they could until a new building was constructed. It was located about where the Arch Moore home is just across the highway from the Joe Brasel home. You will notice that it is building number two in the picture section.

In 1923 a rare and peculiar circumstance developed. A wind storm from the south moved this building about four feet to the north, a few months later another wind storm came and moved it back to the south.

For fear the building might collapse it was propped up with four logs on each side of the building. The building was considered unsafe so plans were immediately made to build a new building. A new location was selected. A site closer to the business part of town was selected. The present building number three is pictured. It stands on the site of a livery barn. This building was completed and services were started in 1924. As you can see it is a very sturdy and well-built building. A carpenter, H. C. Earp, and a brick mason, Mr. Moore, were engaged to do most of the work. Many of the members donated their labor under the supervision of these two hired workers. It might be mentioned here that the pulpit was built by John Wallis who was a carpenter, blacksmith and a craftsman. This pulpit was moved from building number two. Mr. Wallis was also a good singer and was the first song leader for the congregation.

Other song leaders are named on a different sheet along with all the preachers whose names we could find. One preacher that I want to mention is Francis Carson, a black man. He held a brush arbor meeting down towards the city park. It is said that he never opened his Bible. He would quote some passage of scripture then ask Brother Riley West to read it from his Bible just to show everyone that his quote was just the same as found in the "Book."

According to information that I have received there are five Church of Christ preachers who could quote the Bible from Genesis to Revelation from memory. They are Francis Carson, Joe Warlick, F. B. Srygley, F. D. Srygley and Joe Blue.

Most of the people who came from Alabama were good singers. There were enough singers that each of the four parts, soprano, alto, tenor and bass could have several voices. Singing conventions were held quite often and the Church of Christ group was quite often chosen as the best singers there. Since there were no radio and TV in those days the church would have a singing session to practice the old songs and learn new ones. One thing that always fascinated me was for the group to sing only the notes but not the words. In order to keep new singers coming on to replace those who passed on or moved out of the community, singing schools were held quite often. The picture section has a picture of a singing school led by W. W. Slater in 1912. Other singing schools were held later by Norman Jones, a great grandson of John Wallis, the first song leader. Another singing school was conducted by Elmer Fielder, a cousin to Brother Paul Hogan. There were others but we do not have any records to show when.

Among the families who were real good singers are: The Flakes, the Sandlins, the Sams, the Wallis, the Srygleys, the Coats, the Hills, the Quillins, the Lindseys and Millers.

Another feature of the physical plant is the bell. In the early days before radio, TV, telephones that worked, there were some families who did not have a clock. Those without a clock depended on the sun for telling time. So, in light of these conditions, each church had a bell which would tell the members that it was time to attend services. The bell was also used to toll the death of a member. It was a custom to toll the bell one time for each year of the decedent's age.

The bell is mounted atop of the little structure in the back of the church building. It was bought from a foundry in Birmingham through Brother T. B. Larimore who was an agent for the foundry. This bell weights 1800 lbs. It was used regularly and there were times when it could be heard 10 or 12 miles away.

The present congregation, although 100 years old, does not show its age. The congregation is very active. Preaching services are held every Sunday with Brother Paul Hogan bring the lesson, both morning and evening. Brother "Creepy" Hodges comes from Clarksville to help with the midweek services.

The Coal Hill Church is a consistent and regular contributor to the Southern Christian Children's Home. A year or so ago it joined with others to send aid to the persecuted and hungry Christians in Poland. More recently a contribution was sent to relieve the suffering and hunger in Africa. Anytime there is a local need this congregation is always ready to do whatever is needed to solve the problem.

The leadership is excellent. The elders are Roy Morris, Vernon Jones and Junior Kinney. The deacons are Jimmy Stiles, Dean Morrow and Gary Jones.

Last year a directory of the members was compiled for the first time in the history of the church. It will be revised periodically to keep it up to date.

It is hoped that a system of record keeping will be set up. Church records are very useful at times in this life.

It is hoped that whoever has the responsibility of putting together the history of the second hundred years will have access to more records than were available for this story of the first hundred years.

It is our prayer that this congregation will continue in the Lord's work for several more one hundred year spans.

The above historical sketch of the Coal Hill Church was made in the 1980s. In 1999 the third building was burned down by arsen on October 31. In one night the hopes and dreams of the little church was shattered. Suddenly there was nowhere for the little church to worship. According to Leroy Douglas, descendant from song leaders, Tandy Sandlin, the local Assembly of God church building was vacant, as they had built a new building. It became possible for the church to purchase this building, where they now meet. The church building is located on S. Main Street in Coal Hill.

The following is a list of known preachers and song leaders that have preached and led singing during the first hundred years. 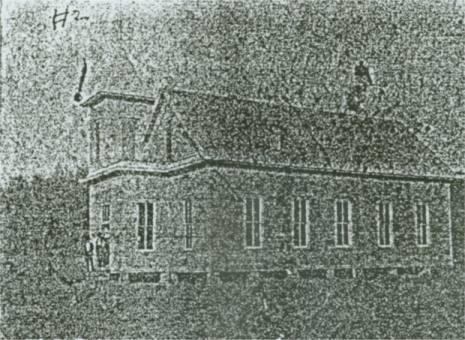 Some Years Ago, This Building Was Moved Off Its Foundation A Few Feet
When A Storm Came Through Coal Hill. Some Years Later Another Storm Came
Through And Moved The Building Back To Its Original Location.
This Was Reported By Leroy Douglas. 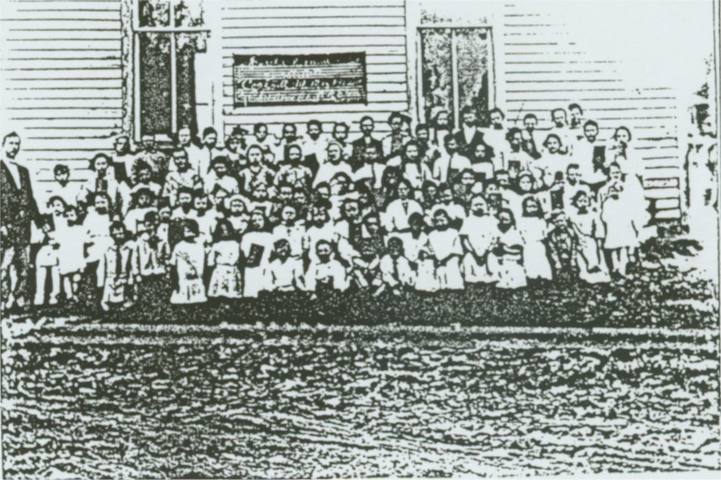 Coal Hill Church of Christ Around The Turn Of The 20th Century. 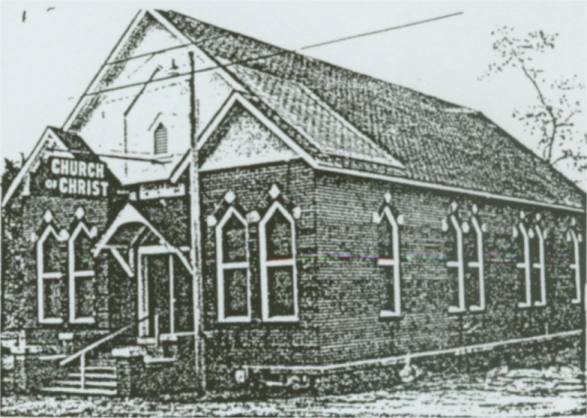 Church Building That Burned In October, 1999 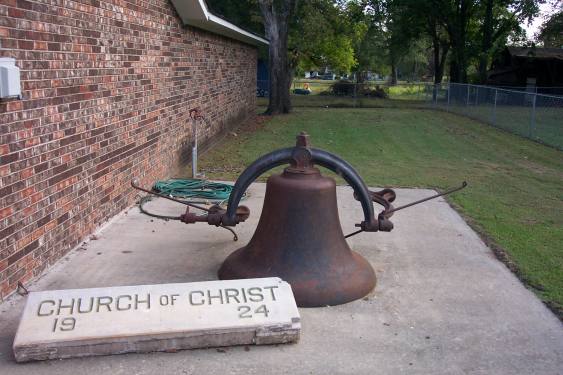 Old Church Bell From Previous Building That Burned In 1999 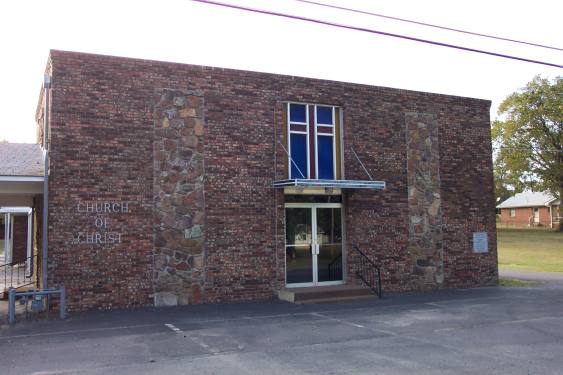 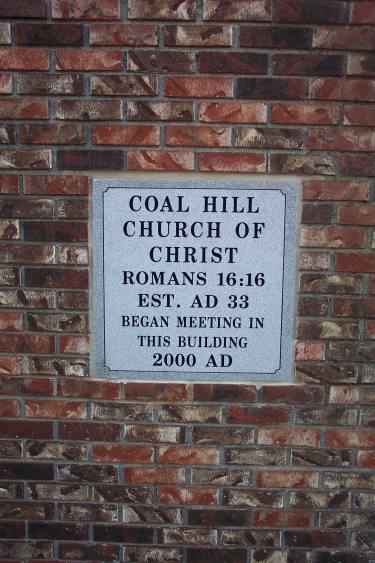 Pictures Below Are The Early Congregation At Coal Hill, Arkansas 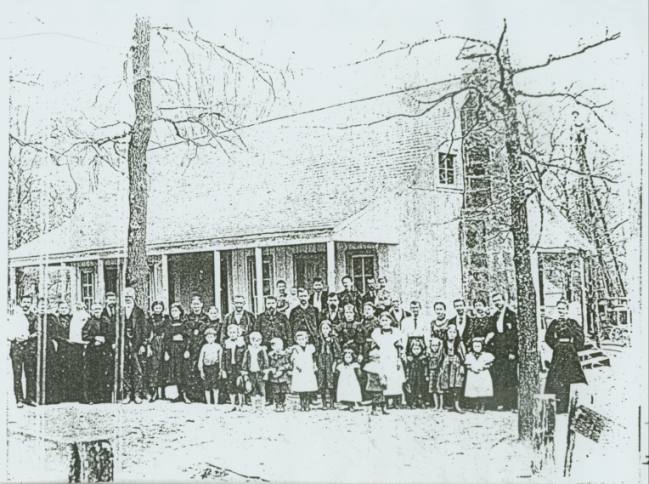 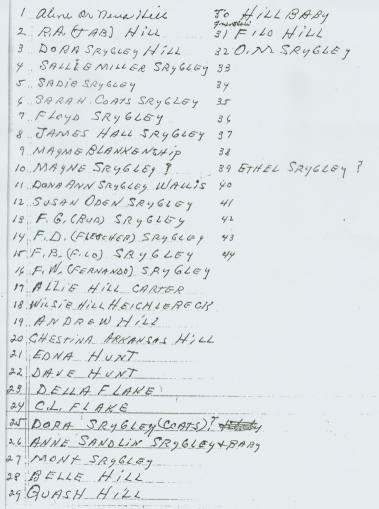 Location Of The Church of Christ Is On South Main Street, Coal Hill, Arkansas

Webmaster Note: On October 4, 2004, I had the opportunity to visit with Leroy Douglas, member of the Coal Hill congregation and descendant of the original group of Srygleys and other families who moved from the Northwest Alabama community of Rock Creek to settle in Coal Hill, Arkansas. He gave a very animated rehearsal of the settling of the Alabama group in the area, and proceeded to tell of the troubles that happened to the church and their buildings through the years. Many thanks for his input in the production of this site. If visiting Coal Hill be sure to visit the Srygley Family Cemetery where many of the early members of the Srygley family as well as other related church members are buried. For more information contact Leroy Douglas, P.O. Box 164, Coal Hill, Arkansas 72832, #479-497-1445.