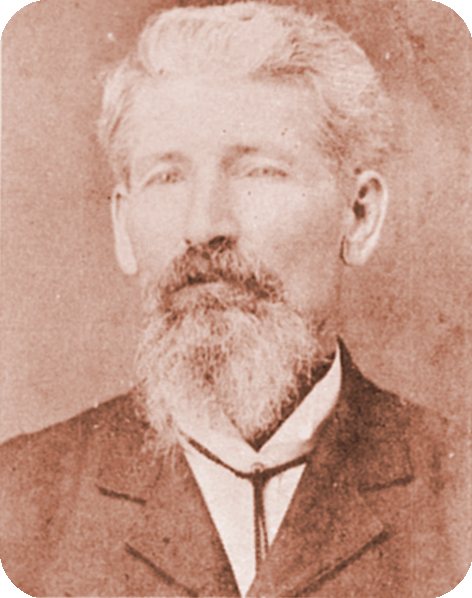 Loved and cherished by all Northeast Arkansas Christians, Brother A. Douglas was truly a pioneer. He was respected by all gospel preachers and all churches in the area and particularly known for his plain preaching on Christian duty.

Born in Massoc county, Illinois February 5, 1845 he volunteered into the Union Army during the Civil War. His discharge papers note that he was eighteen years of age, five feet three inches high, fair complexion, blue eyes, light hair, and by occupation, a farmer when enrolled. The discharge papers are dated at Selma, Alabama, April 13, 1866. He served as a private under First Lieut. E. Hays, Company D, 34th Regiment, New Jersey Infantry of Volunteers.

Soon after discharge, on August 19, 1866 he was married to Miss Mary Baccus. There is no further record of when she died, but he was married again to Miss Matilda Curry on May 22, 1870. Again the trail is lost as to the death of his second wife.

Little is known about when he came to Arkansas. He was converted in 1887 into our Lord's fold in Independence County. Men live who remember hearing him tell during a service how he once was a gambler and a drunkard and wore a steel vest to protect his life. Twice he was shot and his life spared by the vest. But he would cry while preaching and tell the audience that the gospel changed men and tell how it had changed him. His preaching was very effective and fruitful.

He first began preaching in Independence County in 1890 and received his credentials from the old Antioch congregation. They read: The Church of Christ Greeting all to whom this may come greeting, this is to certify that our Beloved Brother Alexander Douglas is a member of the Church of Christ worshipping at Antioch, Independence County, Arkansas and he having been a faithful member and laborer in word and doctrine, therefore we the church do this day give him authority to act in any capacity in the church and to solemnize the rite of matrimony. Approved By The Church, October 2nd, 1893. Said certificate was filed in the circuit clerk's office for record on the eighth day of December, 1892 in Record Book A, page 40 of Credentials, in Independence County, Arkansas. 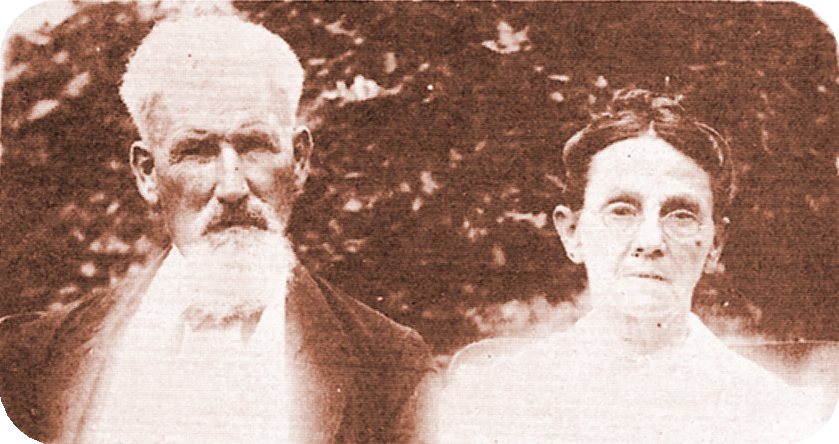 After his conversion Brother Douglas aimed at living the Christian life. He would not use tobacco, coffee, or tea and condemned the use of either. This earned him the appellation of "The Tobacco Preacher," meaning that he was against it. This was far more unusual among preachers of his day than ours. Considerably more than half of the old time Arkansas preachers either chewed or smoked or did both. Little was thought about it and less said, except by a few like Brother Douglas. He made some converts to his side among the preachers but even though his preaching was very pointed, (and I have through the years discussed his work with many people) I have yet to hear any man speak disparagingly of him or his work. He was loved by everybody and none less by the brethren whom he ripped up and down the back. Many stories have come from his preaching and usually when you discuss with anyone about his work, the first thing they remember was his battle against coffee and tobacco.

Once he carried the mail from Jonesboro to Gilkerson and on down to old Red school. He stayed often with Brother J. H. Hamilton. He would always hunt up Brother Hamilton's pipe and hide it. Then Brother Hamilton got to hiding his pipe before Brother Douglas arrived. Brother Douglas would search for it and keep it until he left if he found it.

Brother Douglas was conducting a meeting in Lawrence County somewhere near Minturn when he met a widow by the name of Tennessee (Tennie) Wooster. Being himself a widower, he found she appealed to him strongly but had no idea how she would react to him calling on her. He got her grandaughter to carry a note from him to her, inquiring if he could call. The result was their marriage and the making of a happy home.

At the turn of the century, this grand old pioneer lived at Center, a stronghold of the church in Sharp County. He preached there and throughout the County. He held many meetings in the area and baptized lots of people. Early in the century he moved to Paragould where he lived until his death.

In April 1919 he had published by the Christian Literature Depository Print of Goal Hill, Arkansas, a leaflet on the "Evils of the Tobacco Habit." Brother J. H. Whisnant said, "It affords me great pleasure to publish and assist in the distribution of his leaflet against the evils of the tobacco habit. To be with Brother Douglas is to know a life free from obnoxious and nauseating habits is the life for a Christian to live."

The grim reaper took him from his tabernacle of flesh, at his home, 521 East Lake Street, Paragould, Arkansas, on August 29, 1922 to the house eternal not made with hands. The body was buried in Linwood Cemetery of that city. 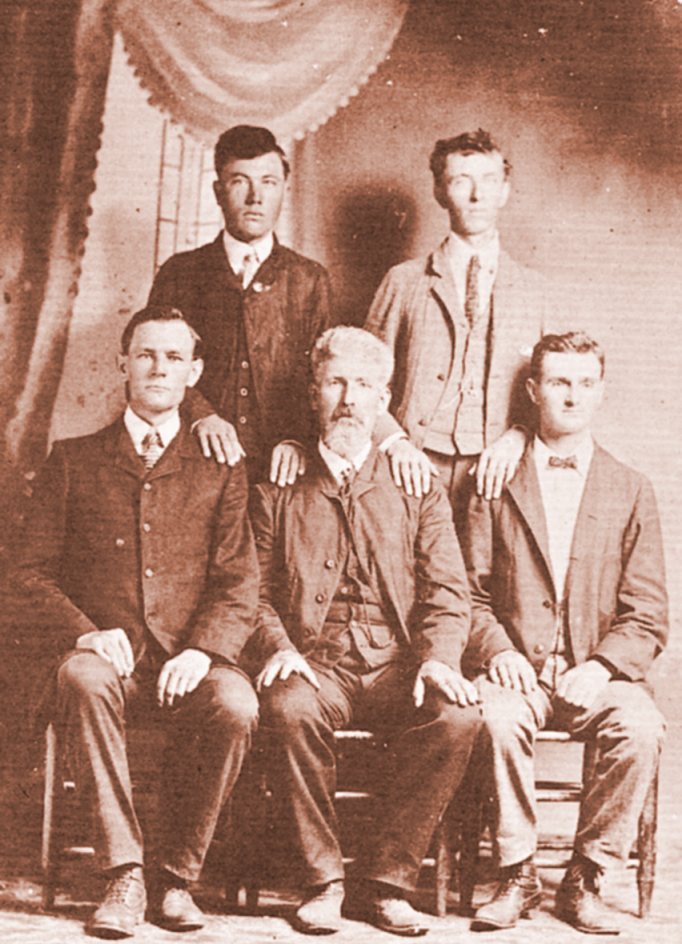 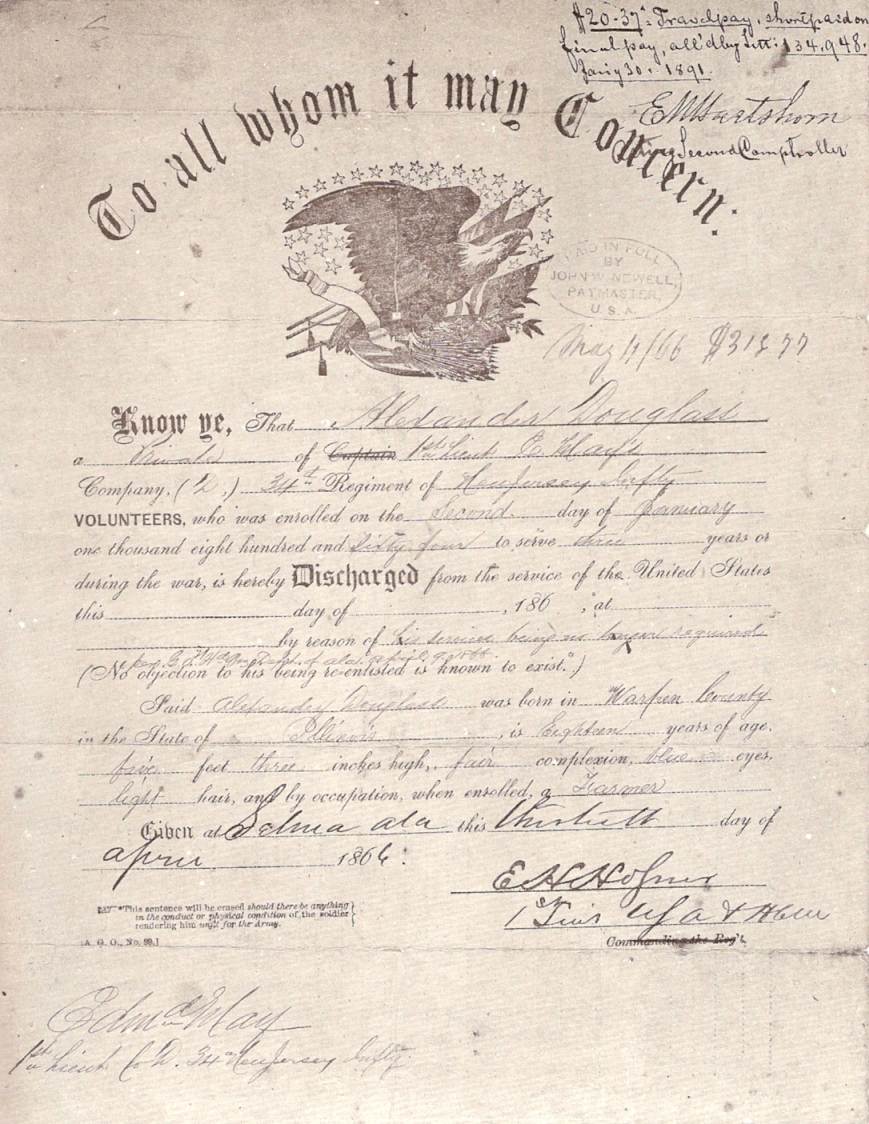 Discharge Papers For A. Douglas From The Union Army

Location Of The Grave Of Alexander Douglas

Alexander Douglas is buried in Linwood Cemetery in Paragould, Arkansas. Paragould is located in the Northeast section of Arkansas in Greene County. From Memphis, Tennessee head north on I-55 into Arkansas. Take Exit 23, Hwy. 63 toward Jonesboro. In Jonesboro, take Hwy 49 north to Paragould. As Hwy. 49 intersects with Hwy. 412 in downtown Paragould you will see the Linwood Cemetery on your right. Turn right and enter the main entrance of the cemetery. Travel up the hill until you are even with the large mausoleum at the top of the hill on the left. Back to your right look for the sign ORIG ADD, and head down the grass access lane back toward Hwy. 49. On the left you will see a concrete curb. Nearly against the curb (to the east) will be the Douglas plot. 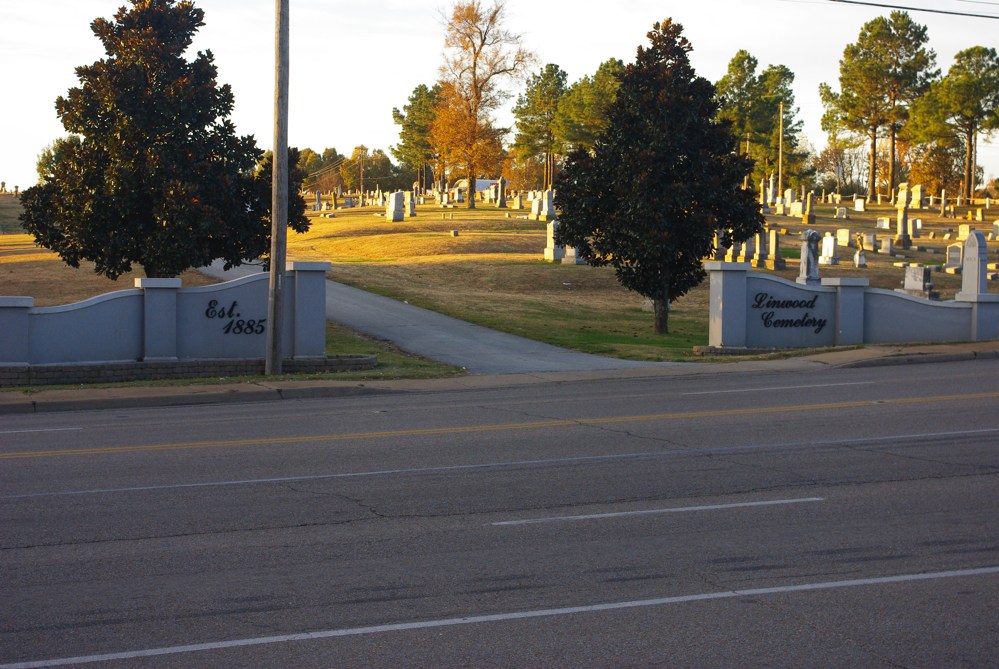 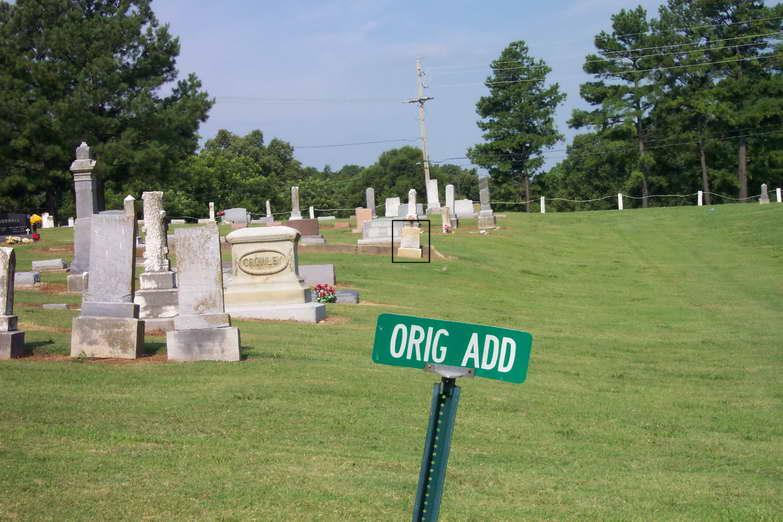 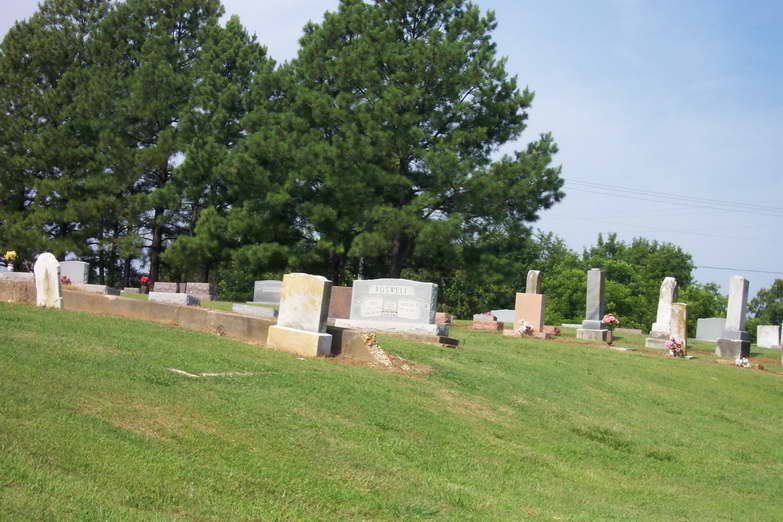 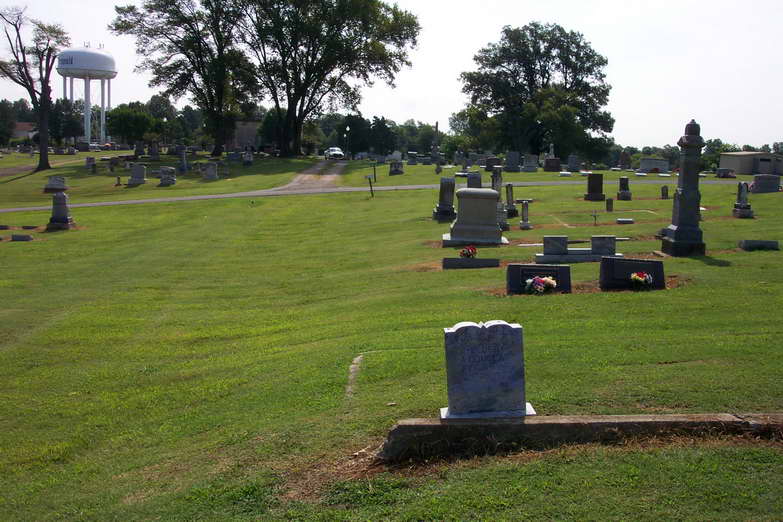 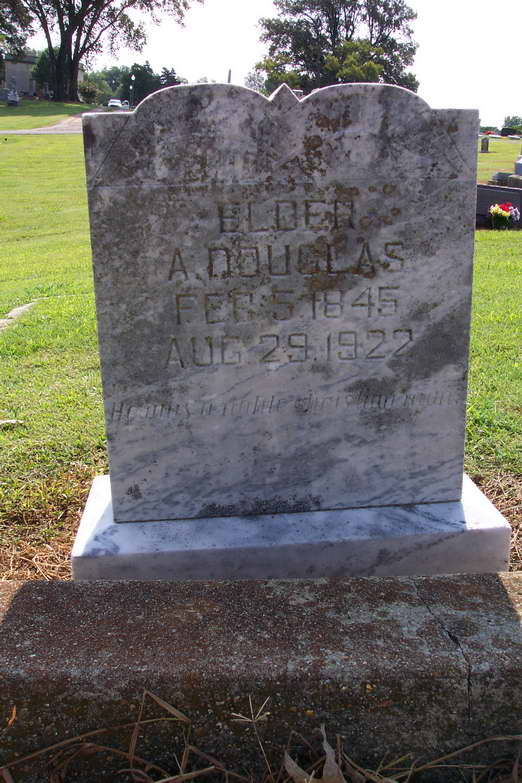 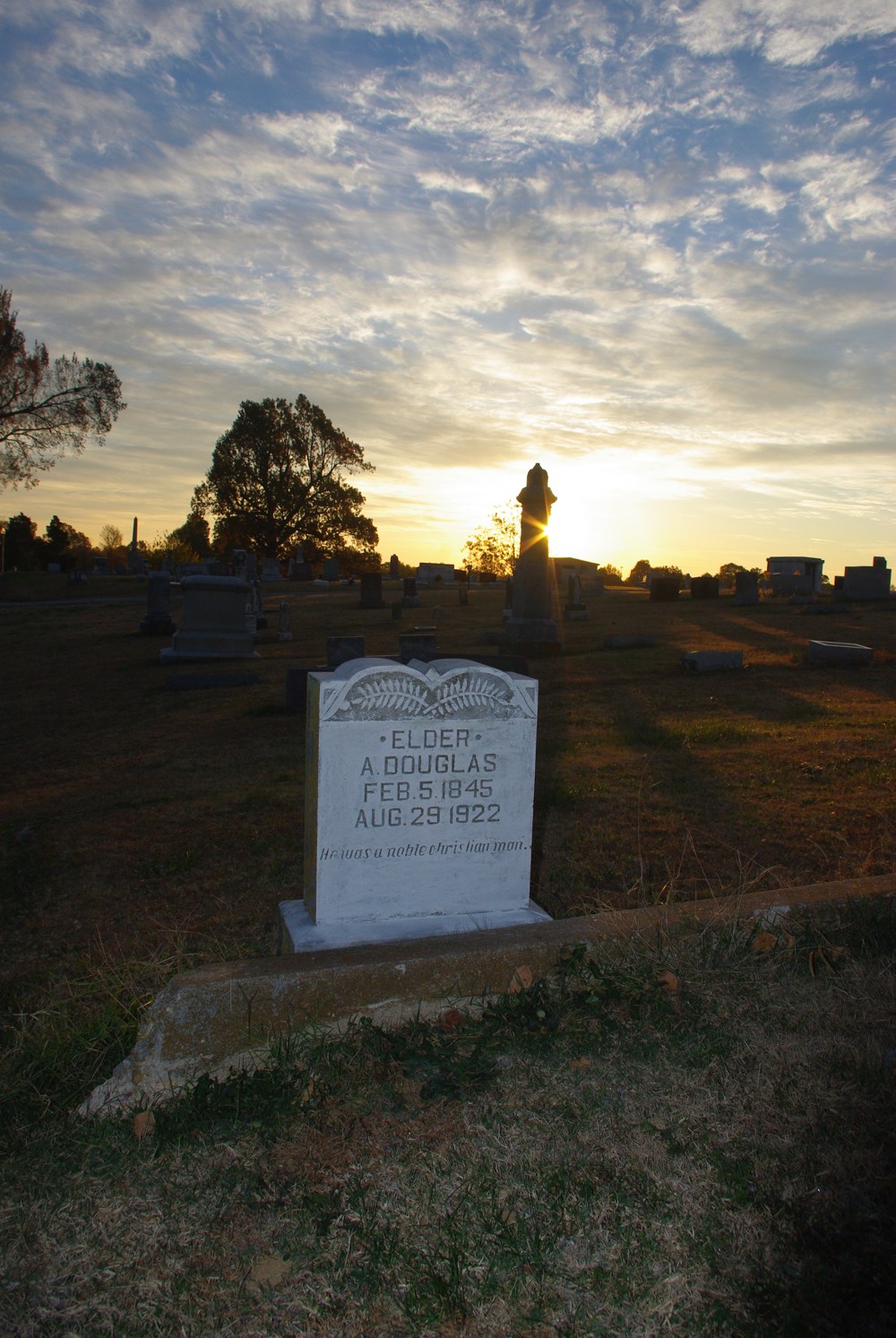 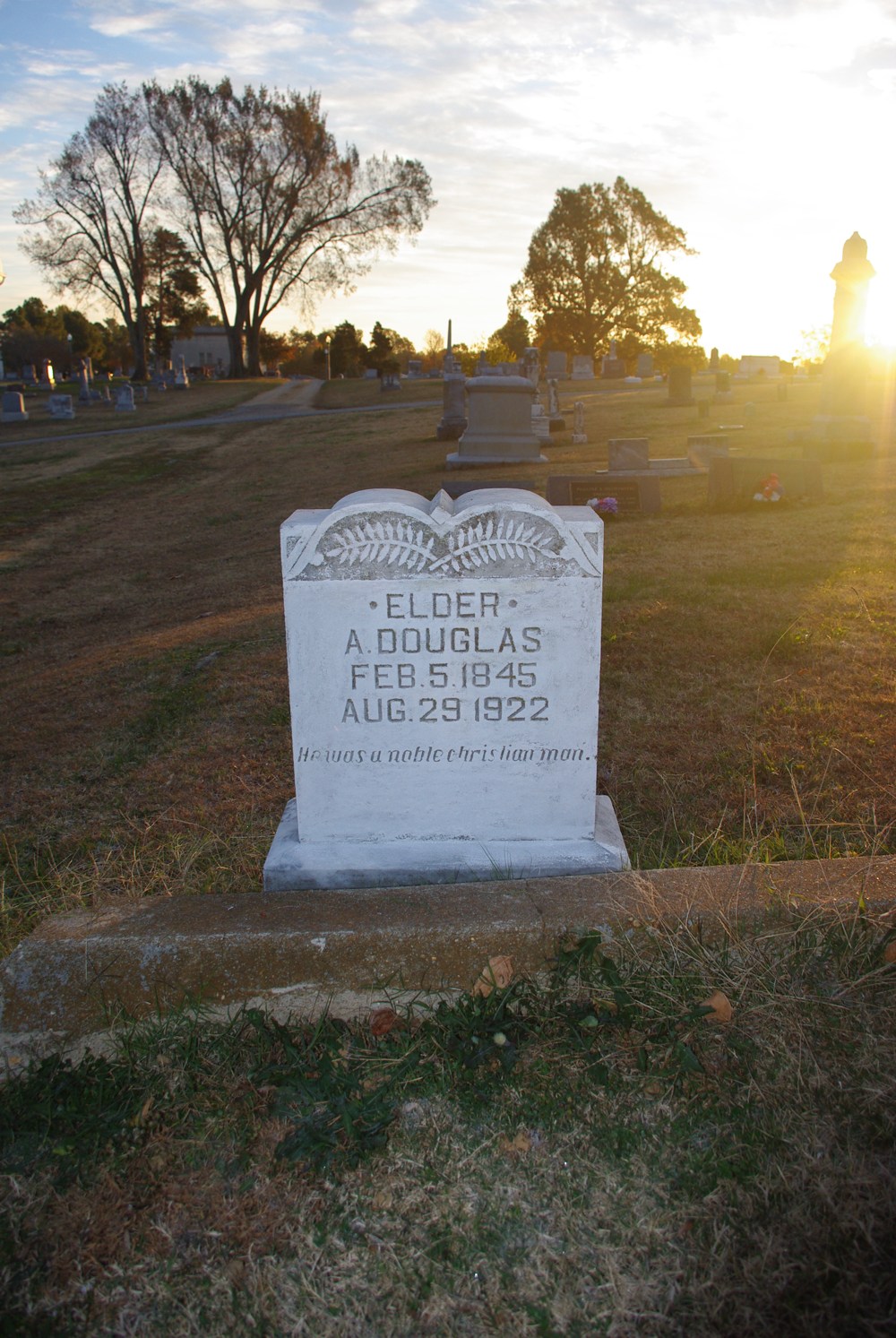 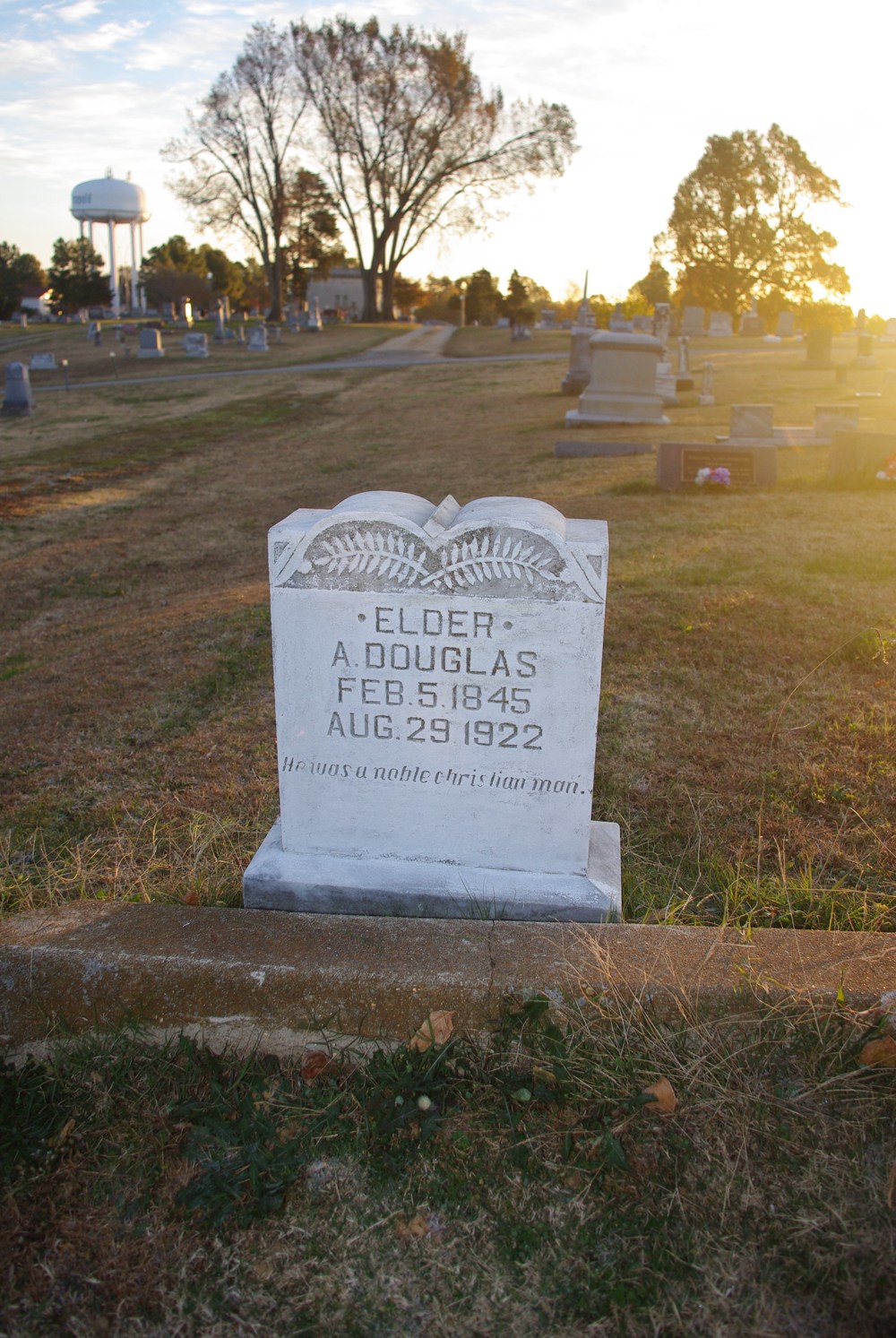 A Bit Of Trivia: While in the Linwood Cemetery be sure to visit the grave of the infamous gangster and bank robber, Frank Nash.
He was slain during a failed attempt to help him escape custody during the Kansas City Massacre in June, 1933 by "Pretty Boy" Floyd.
The grave is in the family plot in the mausoleum that stays locked. Someone at the city hall will need to be contacted to get access.
Nash had no known connection with the Restoration Movement. 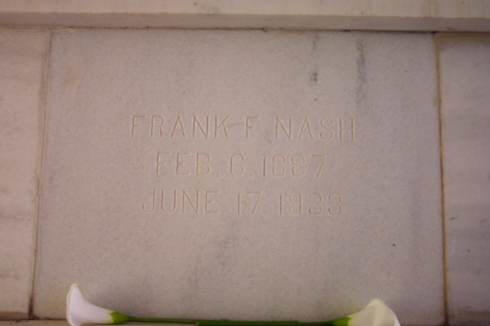