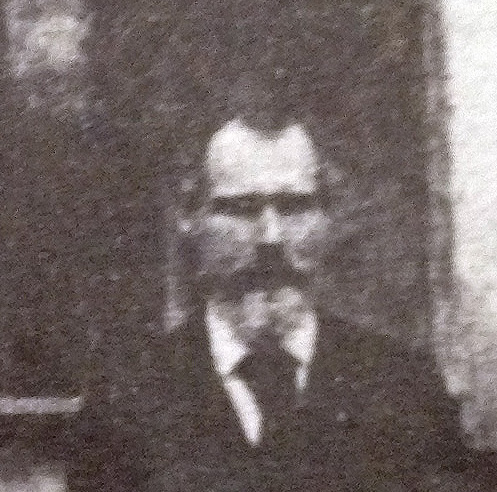 John M. and Barbara Lemmons had seven sons and two daughters. Barbara died after the birth of their last child, Margaret (b. 1859/60), and by 1880 John had married Mary Smith. This union resulted in no children.

A.J. (Josephus), John and Barbara's fourth son, and gospel preacher extraordinaire, was born November 4, 1843, in Warren County, Tennessee, and came to Arkansas with his parents about 1851.

Josephus grew to manhood in Randolph County during the trying years before the Civil War. His family, despite being totally Southern, opposed slavery. When the Civil War reached Arkansas, eighteen year old Josephus felt it was his responsibility to enlist in the Union Army and fight the Rebels at Pea Ridge.1 (1 Nuckels.)

The father of this spirited young man took Josephus and his family and moved to Illinois. They immediately set out to establish a New Testament church at Gum Springs, Johnson County, in 1863, four miles west of Vienna.2 (2 Nathaniel S. Haynes, History of the Disciples of Christ in Illinois (Cincinnati: The Standard Pub. Co., 1915), p. 2.)  Josephus is specifically listed along with his father as the founder of this congregation. They returned to Randolph County. Arkansas, in 1865.

It is possible that Josephus married while he lived in Illinois. Records indicate  that he was married first to a Marilda Elizabeth Hendrix and then to a Mutara A. T. Hendrix. Evidence seems to suggest that Josephus had a child by one of these wives.3 (3 Some family members say Josephus had twelve children. See: Nuckels, p. 4. Reuel Lemmons, another family member, in a letter to John Logan Morgan of Newport, said Josephus had seven children, Aug. 11, 1977.)  His third wife, Melinda V. Lemmons,4 (4 S.F.D., "Obituaries," The Gospel Advocate (Feb. 6, 1873):141.) died June 16, 1868, and she bore no children. Tennessee Lemmons,5  (5 Ibid.) whom he married about 1869, died January 10, 1873. She was twenty-five at the time of her death and had given birth to two sons ages 2 and 4 at the time of her death. Thirty year old Josephus married his fifth wife, Mary Melinda Shelton (age 19), on January 30, 1874.6 (6  Marriage Reord D, p. 233, Lawrence County, Arkansas.) Before she died (in 1889), she bore nine children.7 (7  Nuckels, p. 4.) His last wife was the widow of M. J. Wilks. No children were born to this union. Widow Wilks had a daughter, Susan, who married W. F. Lemmons.

One month after the death of Melinda, A.J. (Josephus) was "called and set apart as an evangelist" by the Church of Christ at Hubble Creek.8 (8 Randolph County Book 2. p. 321.) Perhaps death, which young A.J. knew so well (and would come to know again) may have been a motivating factor in his decision to preach. His license reads:

To the congregations or Churches in Christ-Jesus Greeting: This is to certify that our beloved brother Amos J. Lemmons having faithfully proved his ability in the proclamation of our Lord's Gospel has this day been called and set apart by the Church of Christ at Hubble Creek in Randolph County Arkansas as an evangelist with full power and authority to do and perform all that the Gospel and the laws of the land may guarantee unto him as such, and we hereby heartily commend him to all the brethren in Christ Jesus wherever his lot may be cast in the wisdom of Providence.

The newly licensed evangelist immediately began a protracted meeting at the Surrounded Hill Church in Jackson County just across White River from Newport. Among his converts was Elizabeth Jane Kelley Mason, young wife of J. C. Mason (1845-1934), a pioneer preacher (converted by B.B. Tyler at Litchfield, Illinois) who came to White County, Arkansas, in October, 1867, from Illinois. She and other converts were immersed by Lemmons in the White River.9 (9 J.C. Mason, Arkansas Christian(January 1925):1, 3. Mason's daughter, Bertha Mason Fuller (wife of Arkansas preacher J. H. Fuller), wrote a history of the Christian Churches in Arkansas but before she could get it published her home burned on April 5, 1959, and destroyed most of the contents including the valuable manuscript. (See: Lester McAllister, Arkansas Disciples: A History of the Christian Church (Disciples of Christ) in Arkansas(1984), p. 210.) Josephus' path was cut and he became a recognized and effective preacher in Arkansas and Missouri during the next quarter of a century.

Lemmons helped establish and preached for many congregations in Randolph County. Lawrence Dalton included A. Josephus Lemmons in a list of Randolph County preachers who "left their footprints on the sands of time."10 (10  History, pp. 122, 125.) Josephus and his father were present at the cooperation meeting hosted by the Surrounded Hill Church in Jackson County in September, 1871. J. M. Lemmons chaired the meeting. Thirteen congregations from four counties representing a membership of above five hundred reported.11 (11 J.C. Mason, "Arkansas Cooperation," Christian Standard(Nov. 4, 1871):351. Other preaching brethren present were G. B. Croft of Green County, W. R. Hodge, E. Brown and W. R. Castlebery.) W. A. Schultz attributed much of the growth of the church in north Arkansas to Josephus Lemmons.12 (12 W. A. Schultz, "The Growth of the Church in Arlcanw," Gospel Advocate (July 2, 1914):732.)

A great light was put out when he died unexpectedly in 1895. He was only fifty-one years old. His body was laid to rest next to his family in the Lemmons Cemetery. Even though his tongue had been silenced, two of his sons, Amos M. and B. Monroe, a brother, several grandsons and great-grandsons, and nephews became powerful and popular preachers. 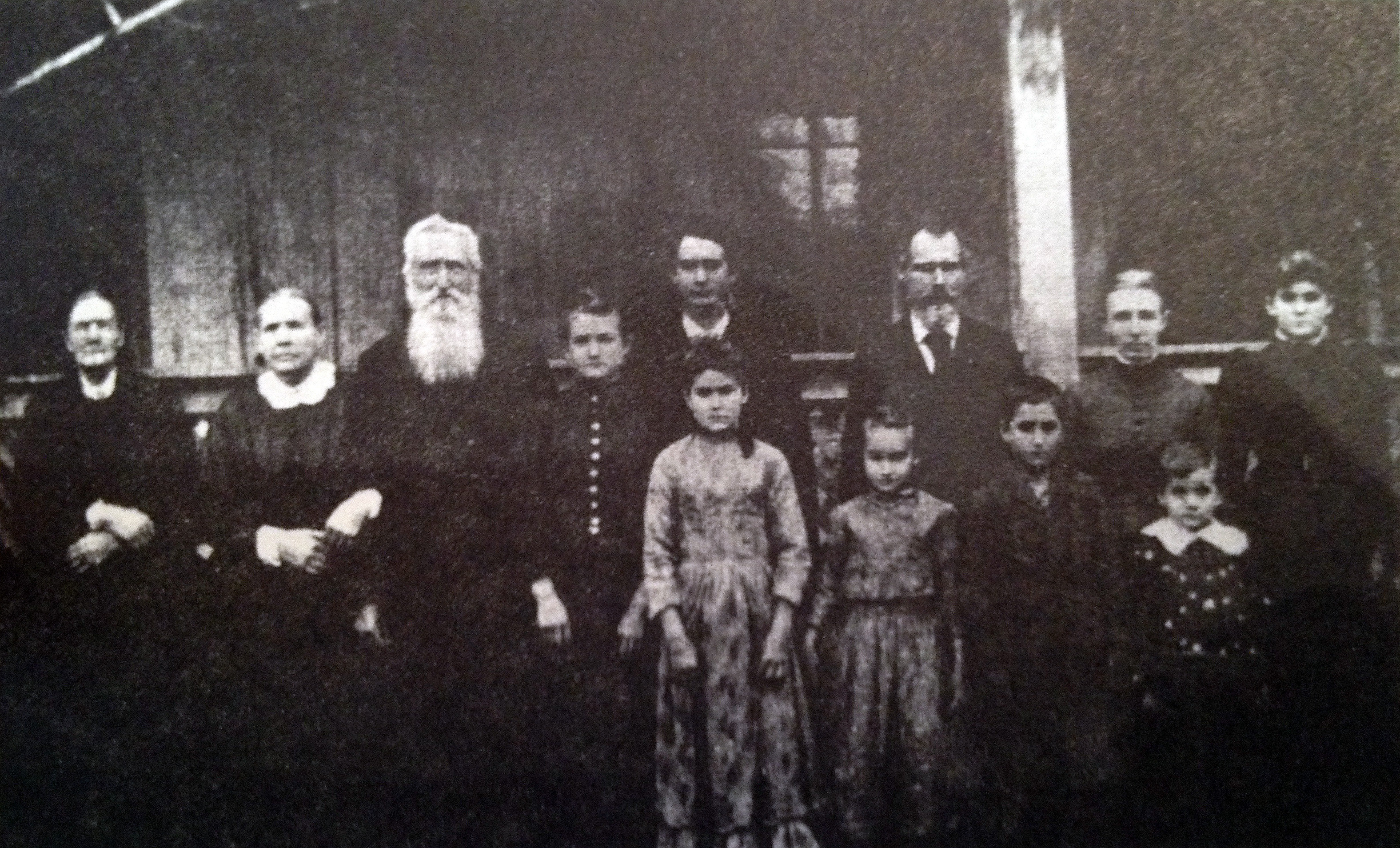 Lemmons Family
Picture made in Randoph County in early 1890's. They were identified as follows by
Reuel Lemmons: Back row, L to R: Derenda Smith, sister of Mary Lemmons;
Mary Lemmons, second wife of John Lemmons; John M. Lemmons; Amos M.
Lemmons, his grandson; Josephus A. Lemmons. father of Amos; Mrs. M. J. Wilks
Lemmons, wife of Josephus; Florence Lemmons. eldest daughter of Josephus and
his wife, Mary M. Shelton. Five children in front row are also from this
marriage, as was Amos. They are Dora, Abbie. Emma and Frank, (twins) and
Walter, Reuel's father. This picture was probably made in 1892 or 1893.

Directions To The Grave of A.J. Lemmons 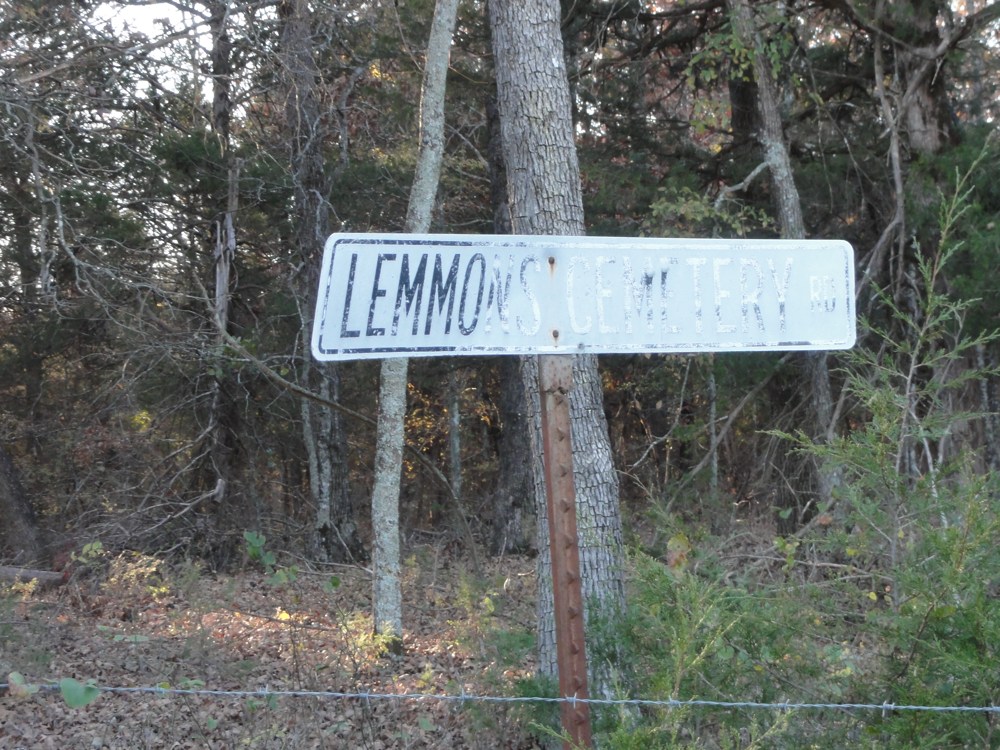 Lemmons Cemetery Road is gated. We parked at gate and walked in about a mile to the cemetery 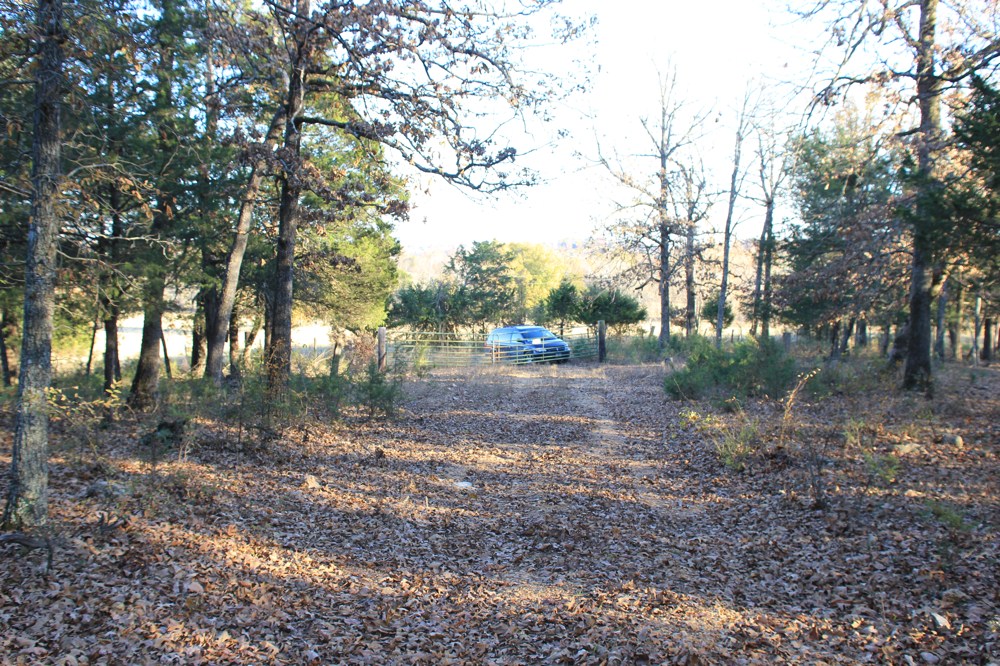 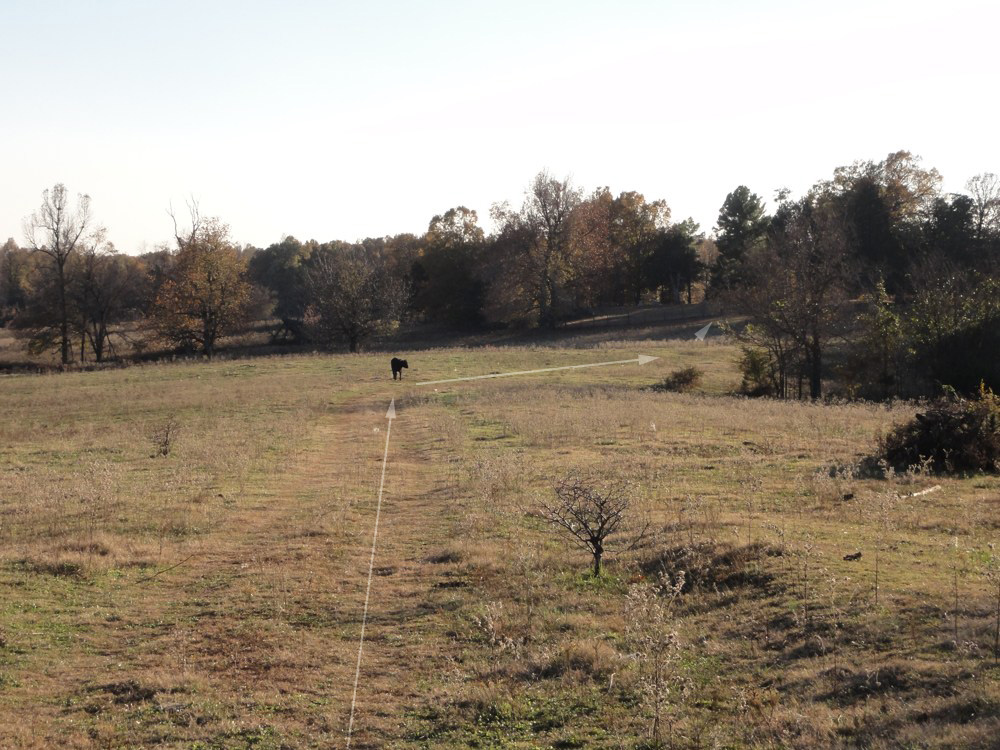 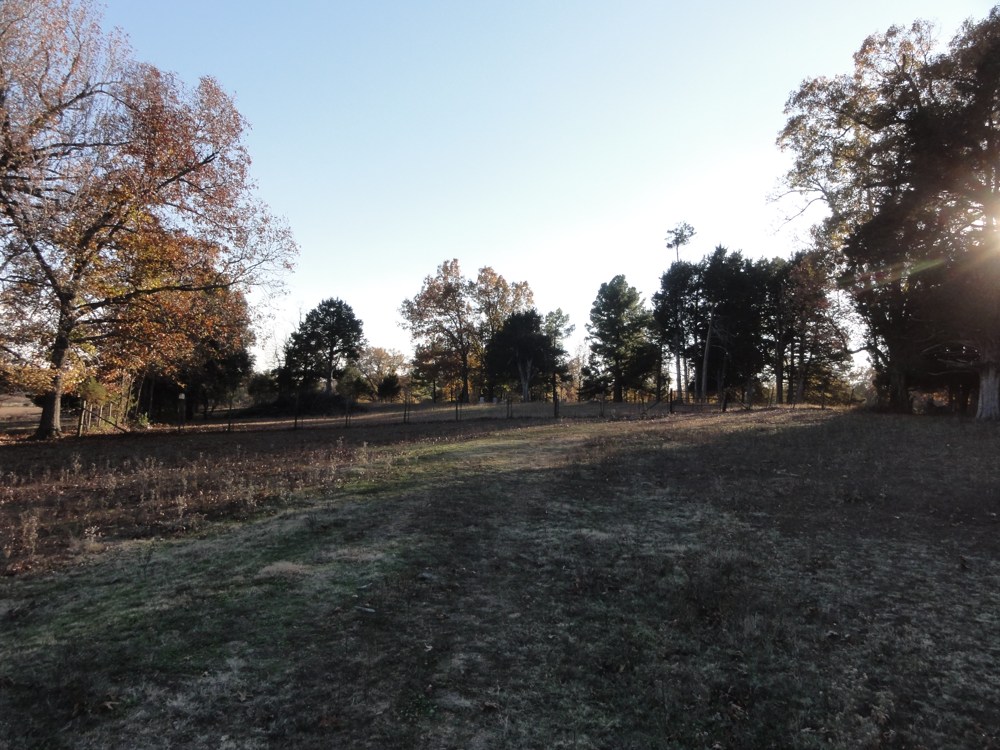 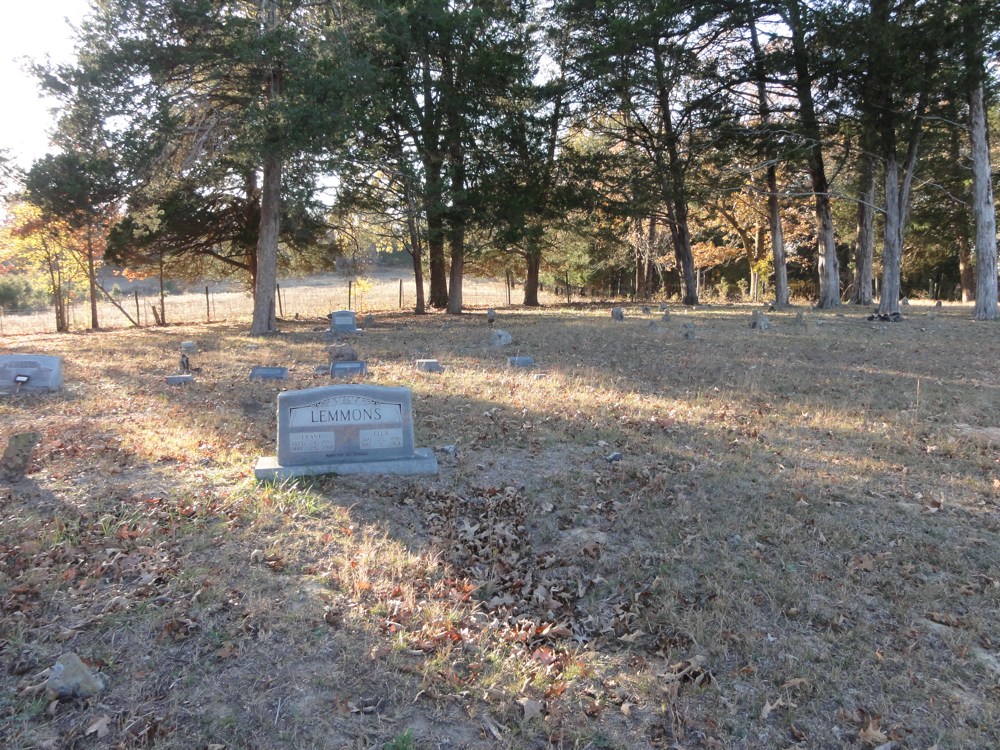 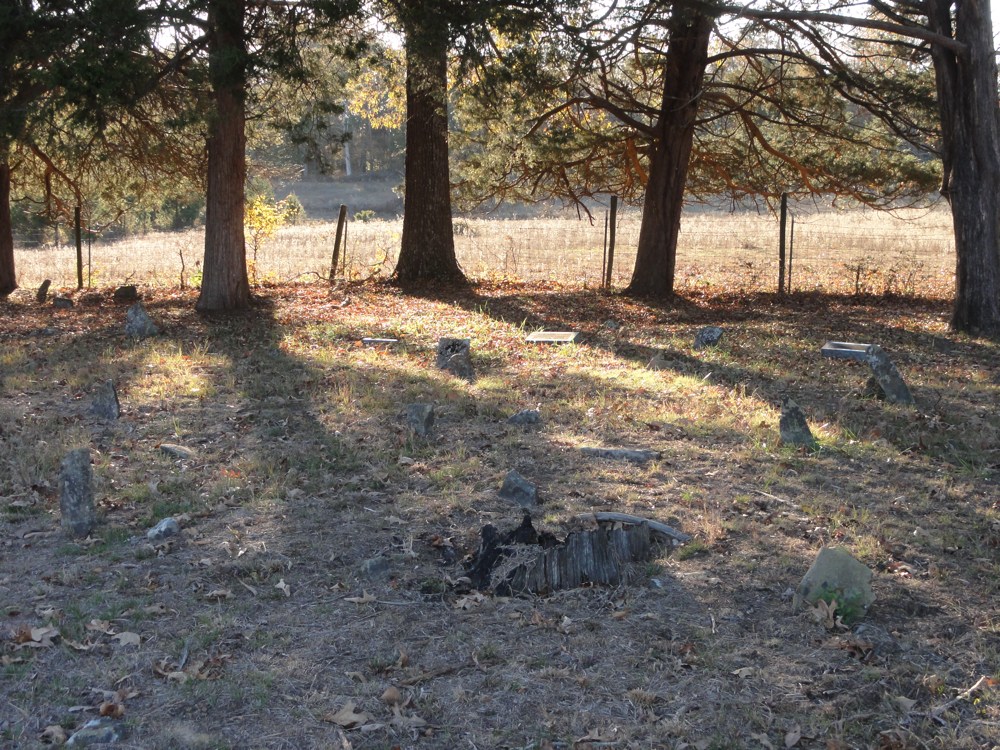 A.J. Lemmons family buried at the rear of cemetery. 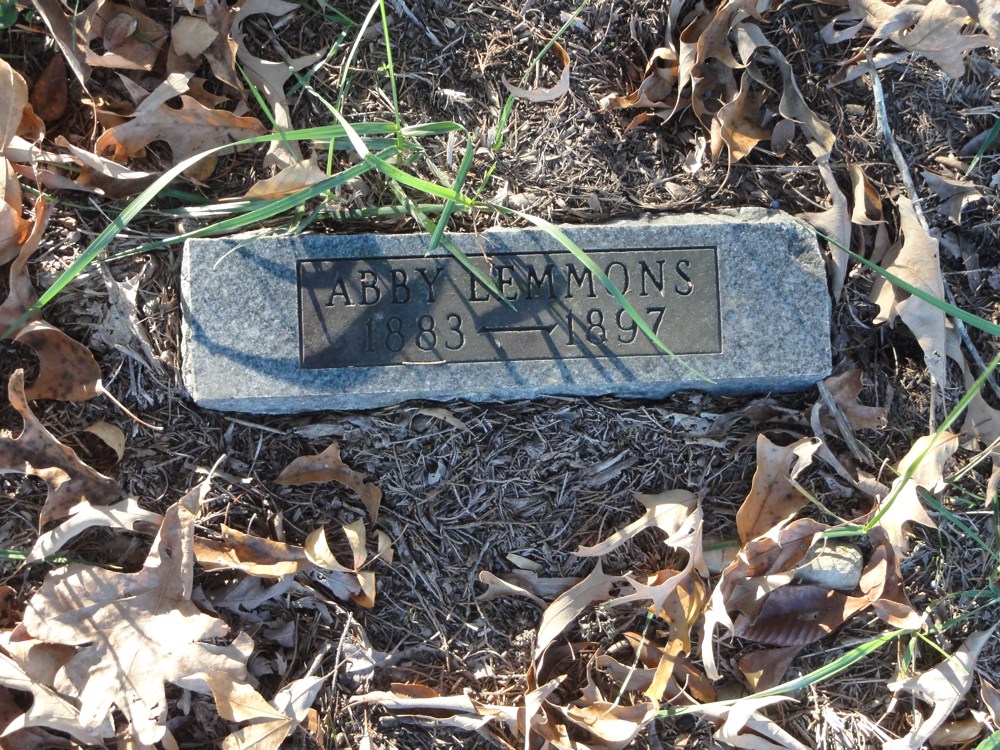 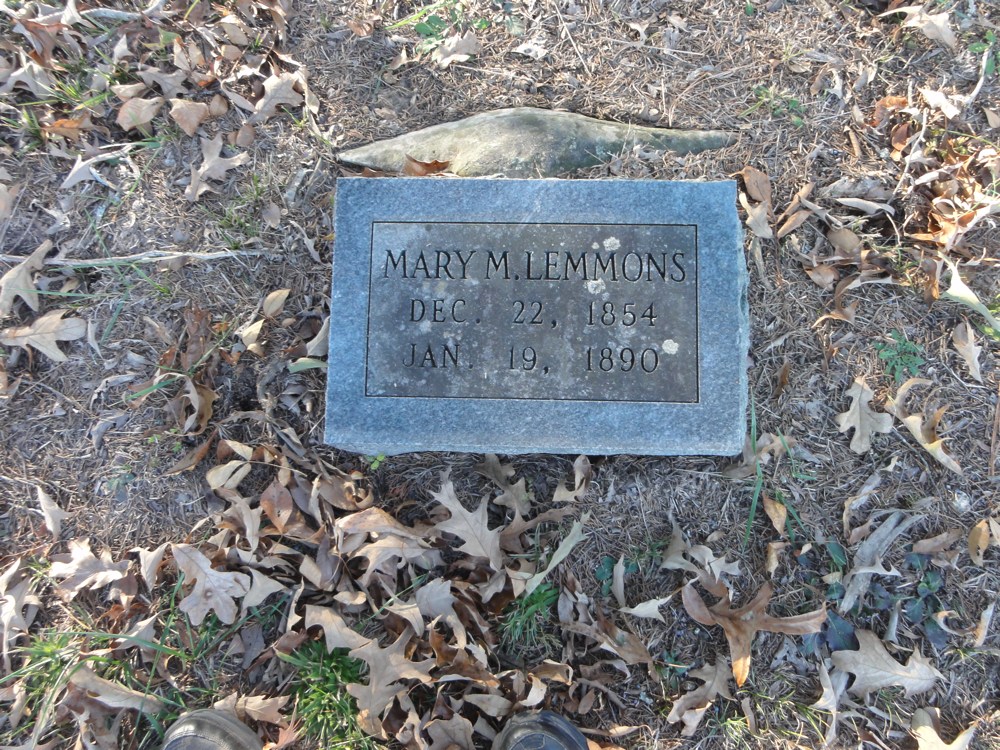 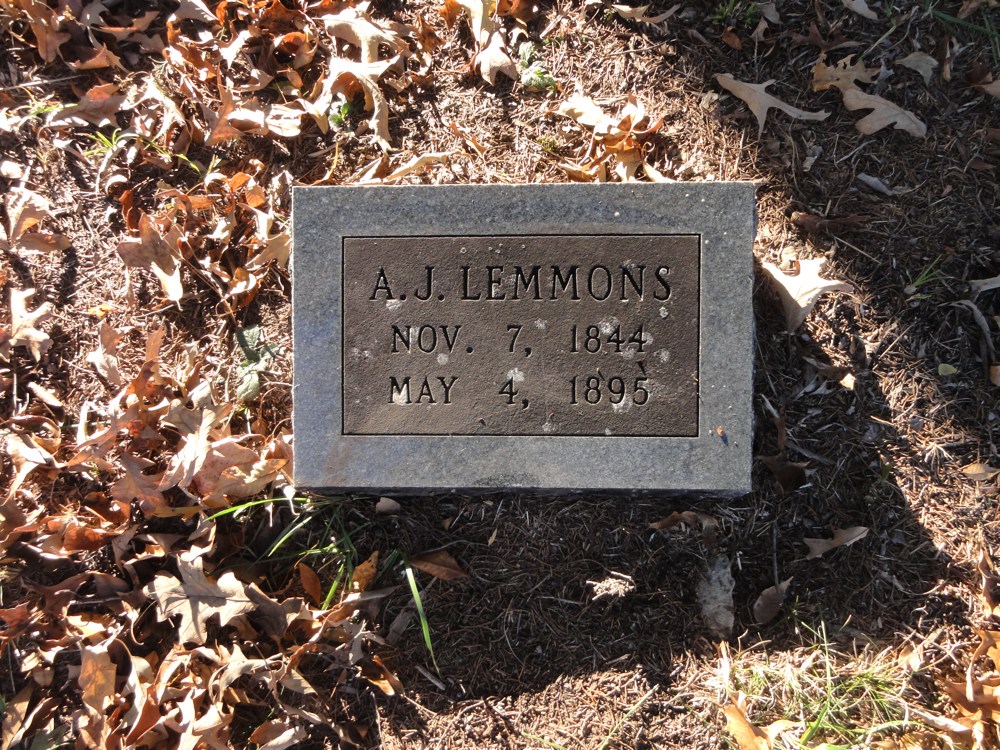