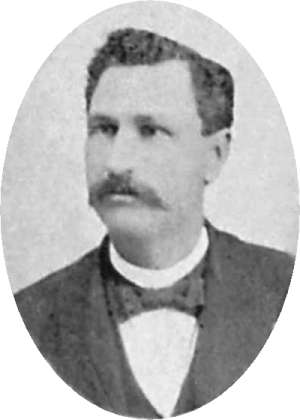 Report of the Passing Of I.D. Moffitt

Ernest Beam, Long Beach, Calif., December 6: "I recently preached two weeks at San Diego, where B. E. Hayden is the minister, and also at the Palm and Dennett congregation in Fresno. One was baptized and four identified at San Diego, and seven were baptized and about fourteen restored or identified at Fresno. Some of these were from the Baptists with Scriptural baptism and others from the Christian Church. Porter Norris, formerly of Tennessee, but now of Fresno, is doing as much good as any preacher in the State. He is holding mission meetings, establishing new congregations, breaking down old prejudices, and remembering the poor and the afflicted. Work here at Ninth and Olive is going good, with increased activity among many members during my absence. I. D. Moffitt, a preacher of the gospel for years, died here recently. He was a good man."

Ernest Beam, Long Beach, California, reporting in the Gospel Advocate, December 19, 1929, page 1209
Other information available: Some other things we know is that I.D. Moffitt was born May 6, 1852 in Asheboro, North Carolina. He was the son of Hugh and Sarah Marie Craven Moffitt, also of North Carolina. He was married to Emma Jackson, born December 27, 1856 in Jamestown County, Indiana. They were married in Villisca, Montgomery County, Iowa. To this union was born two children: Elvina, born June 17, 1879, in Milan, Sumner County, Kansas; and Clarence Moffitt who was born July 30, 1885. Source: Ancestry.com More information is needed to do a fuller biographical sketch on the life of this "good man."

Note: On June 30, 2013 it was the pleasure of your webeditor to have a nice phone conversation with one of the descendants of I.D. Moffitt. George Lenz is the great, great nephew of I.D. Moffitt. Moffitt's sister was George's great grandmother. During our brief conversation, he expressed his thanks for this site in remembrance of his uncle, and said that he grew up hearing the stories told by his grandmother about the ministry of I.D. Moffitt. He said that I.D. Moffitt had founded the church of Christ in Villisca, Iowa before the family moved out to Oregon. He also mentioned hearing that he had a large buffalo skin blanket that he would cover himself up with while a horse took him all over the western ranges to locations where he would preach the gospel. Many thanks to Mr. Lenz of Virginia for contacting us about his ancestor.

I.D. Moffitt Pictured At The Warlick-Ditzler Debate Of 1905 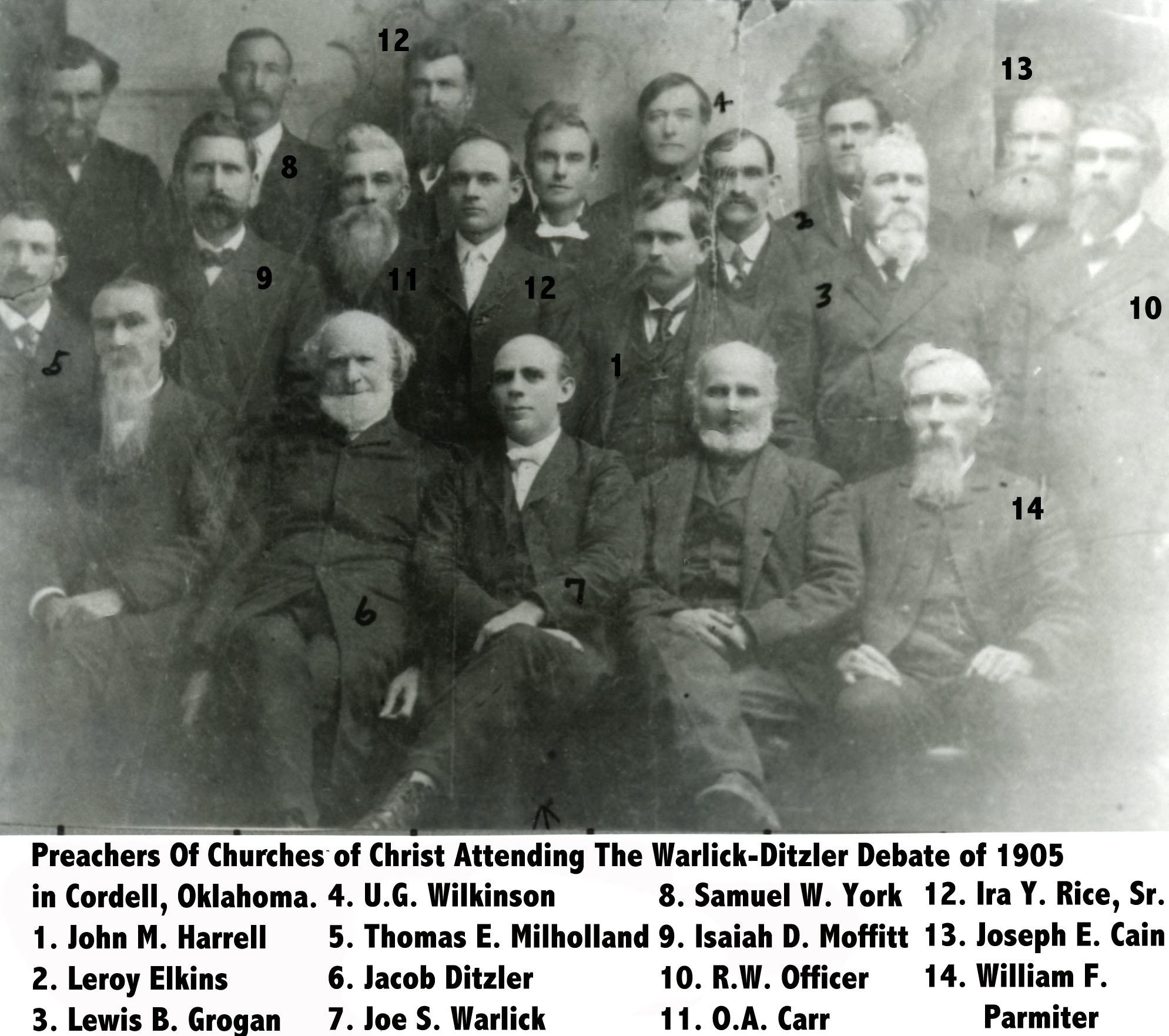 The Warlick Ditzler Debate Took Place in Cordell, Oklahoma in November, 1905
Can you identify others? Let us know!
Note: #9 is a guess at best. No other information proves that I.D. Moffitt was at the debate. The likeness is a guess. -Web editor

Directions To The Grave of Isaiah D. Moffitt

I.D. Moffitt is buried in Sunnyside Cemetery in Long Beach, California. From Los Angeles Internation Airport, travel south on the I-405 toward Long Beach. Take Exit 29c and turn right on Cherry Ave. Turn right on E. Willow St. Enter the main entrance of the cemetery on the right. Bear around past the office to the right side of the cemetery. You will come to the drive that leads back out, but when I was there the road was blocked by dumpsters. They may reopen it someday. But it would be good to park your car here and East side of the cemetery, near the fence. The Moffitt plot is in a close cluster of three flat stone markers, hard to identify from the road. But look for a large marker with MILTON on it. Then behind MILTON there are two smaller markers that are unique. The one on the right will be a short grave marker with and open Bible, and to the left it, too will be short, but looks like a rounded, log-shaped marker. Then two rows behind these will be the location of the Moffitt plot. Look at the photos below to assist. The cemetery is located at 1095 East Willow Street, Long Beach, California. 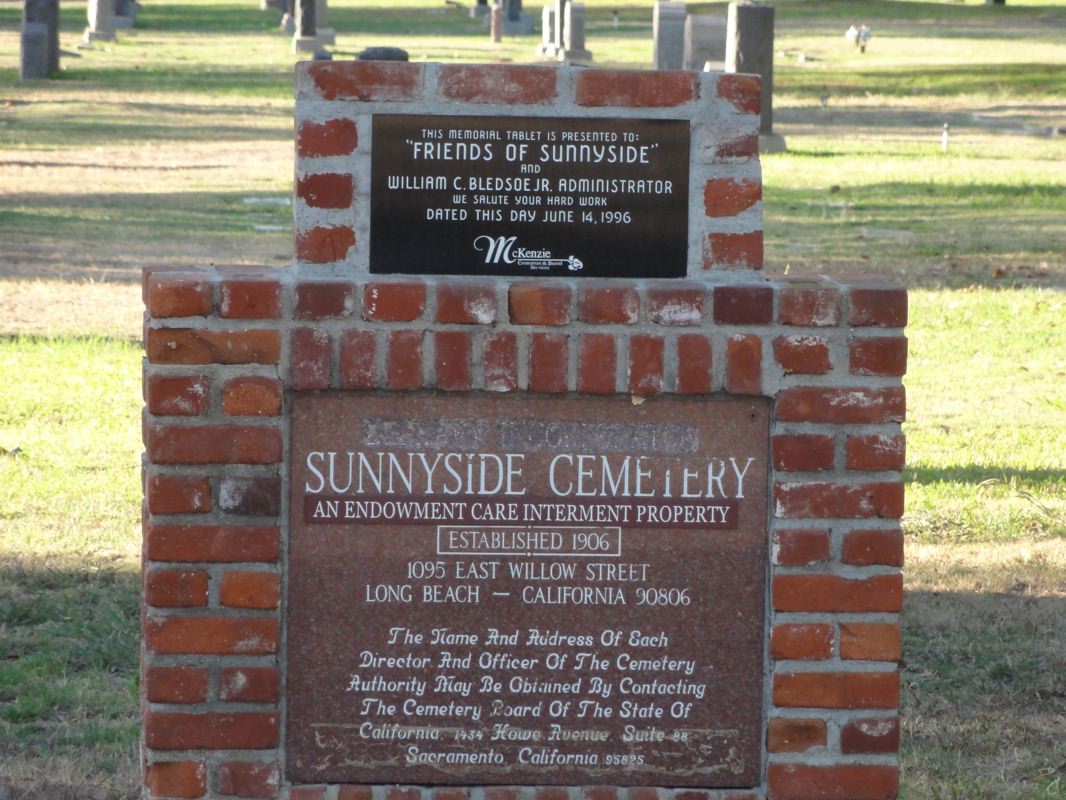 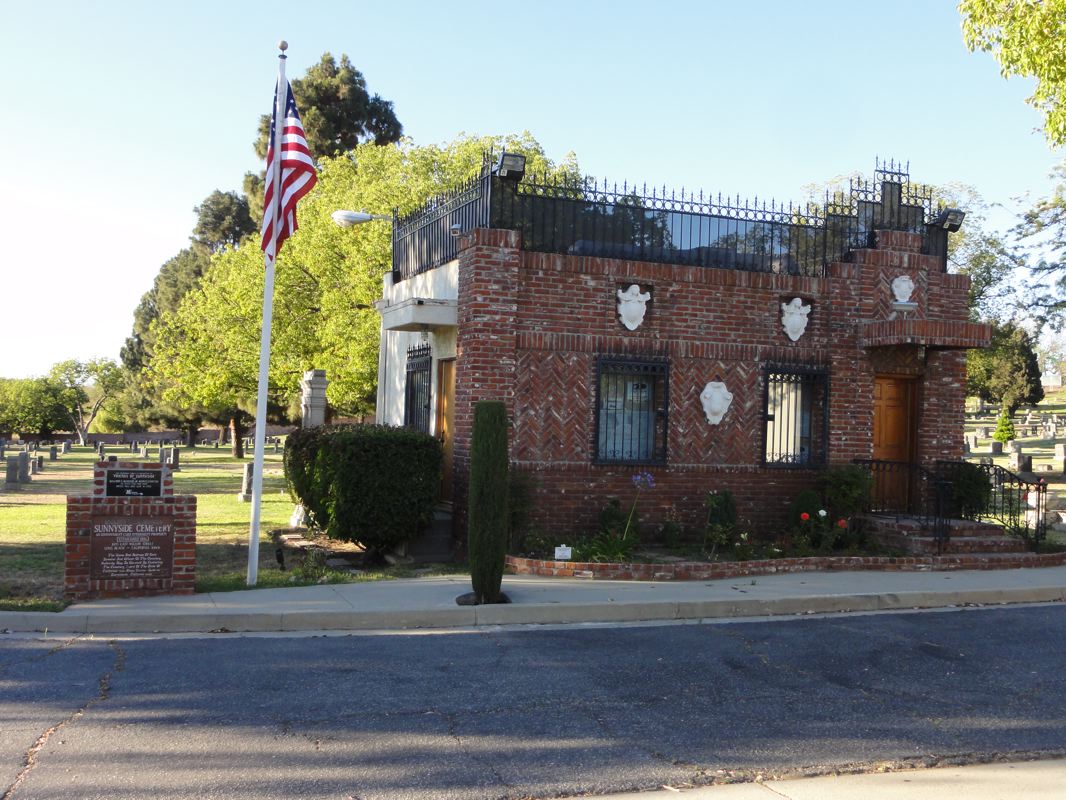 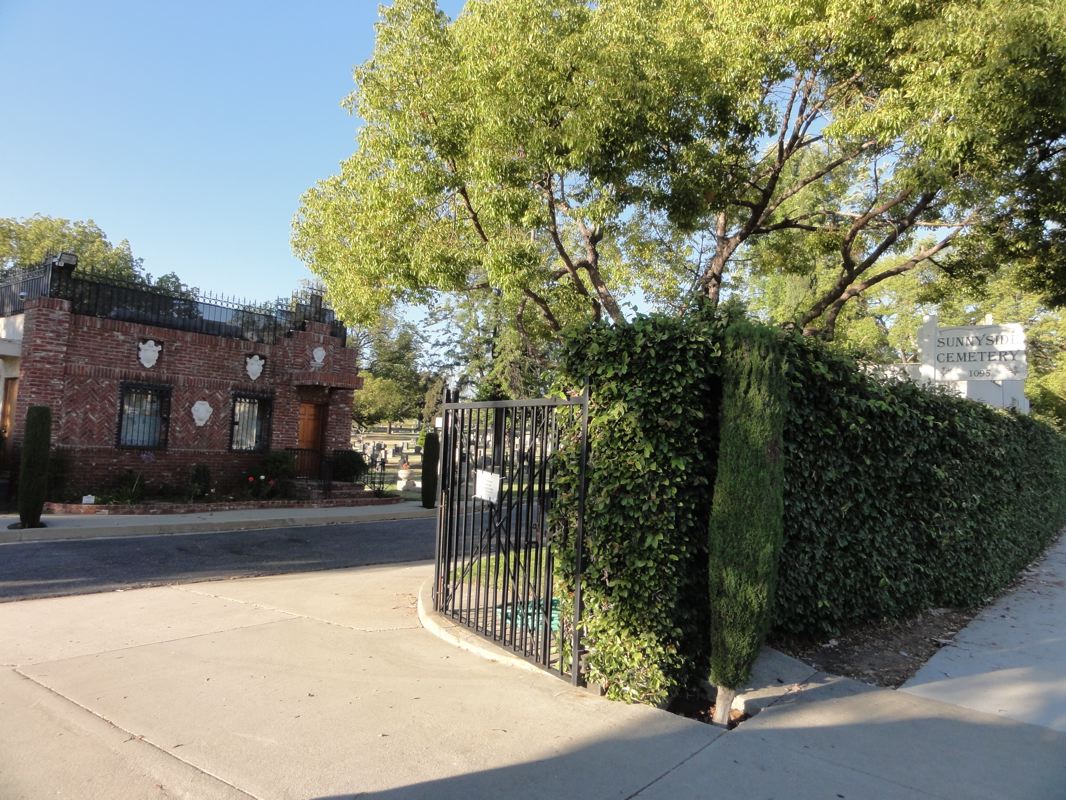 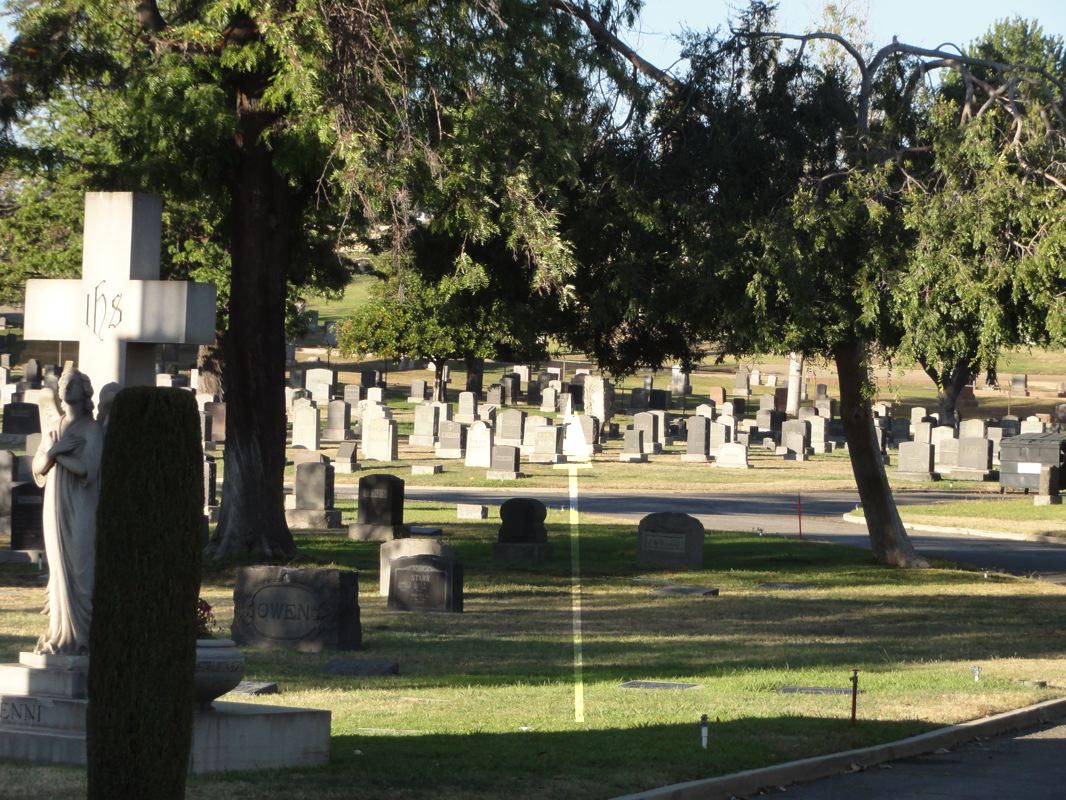 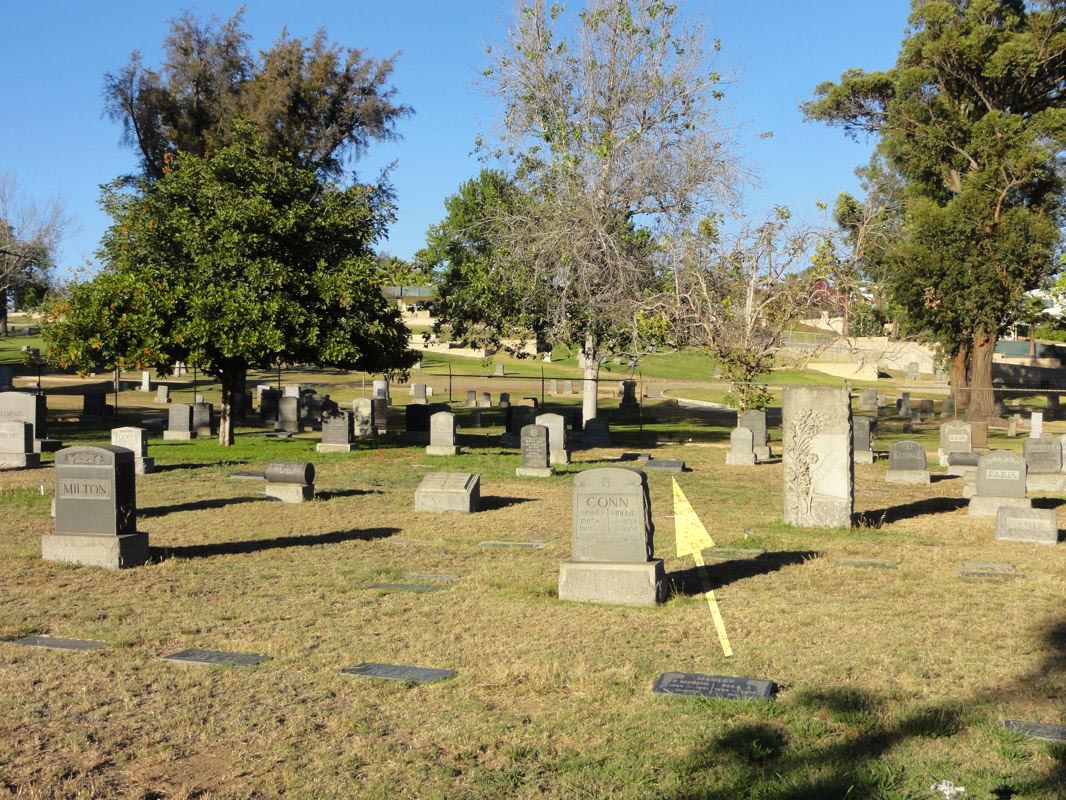 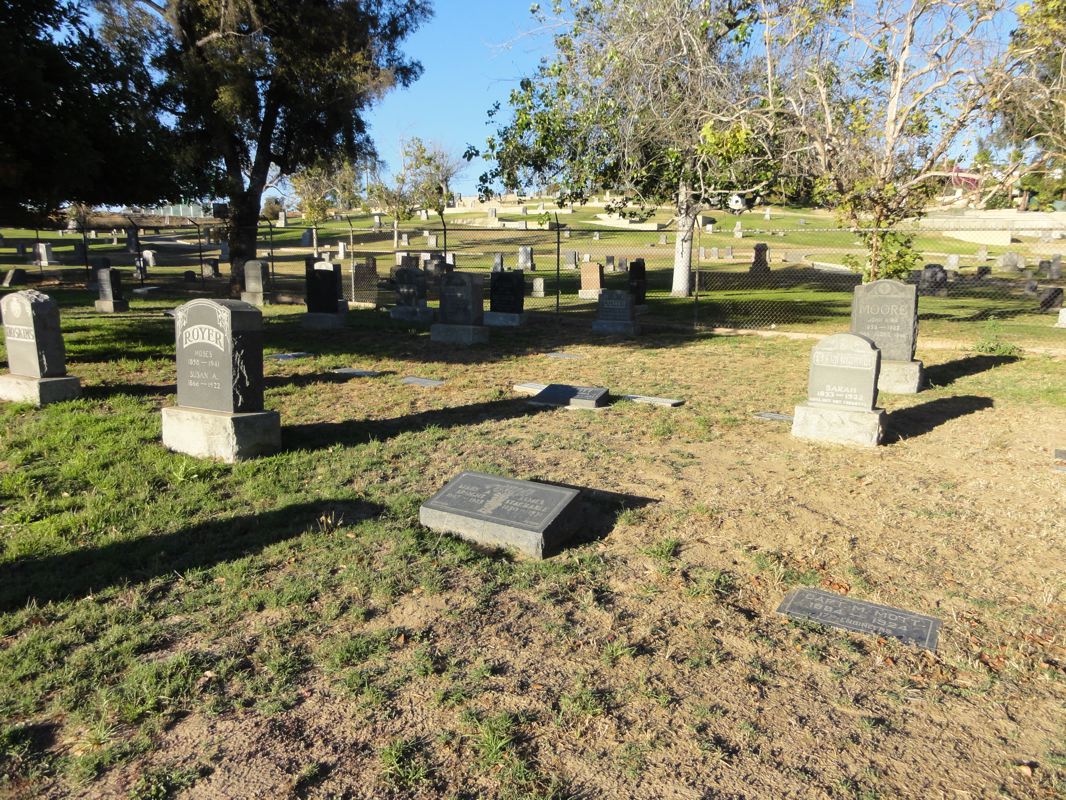 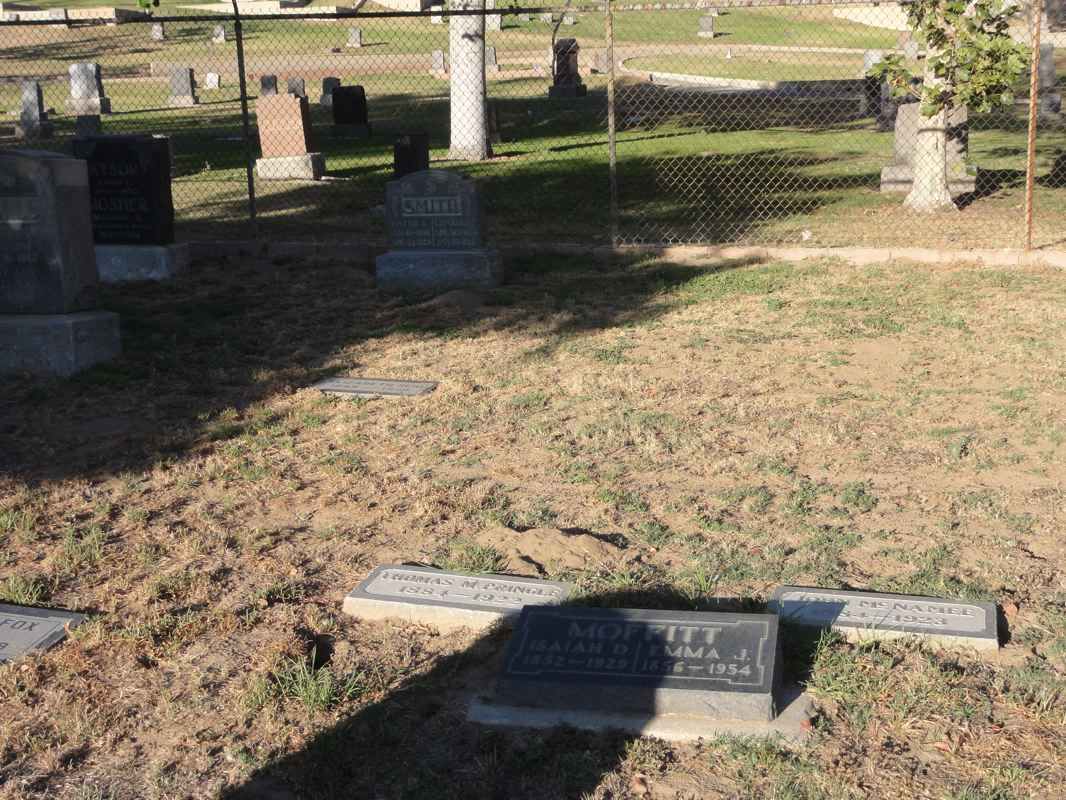 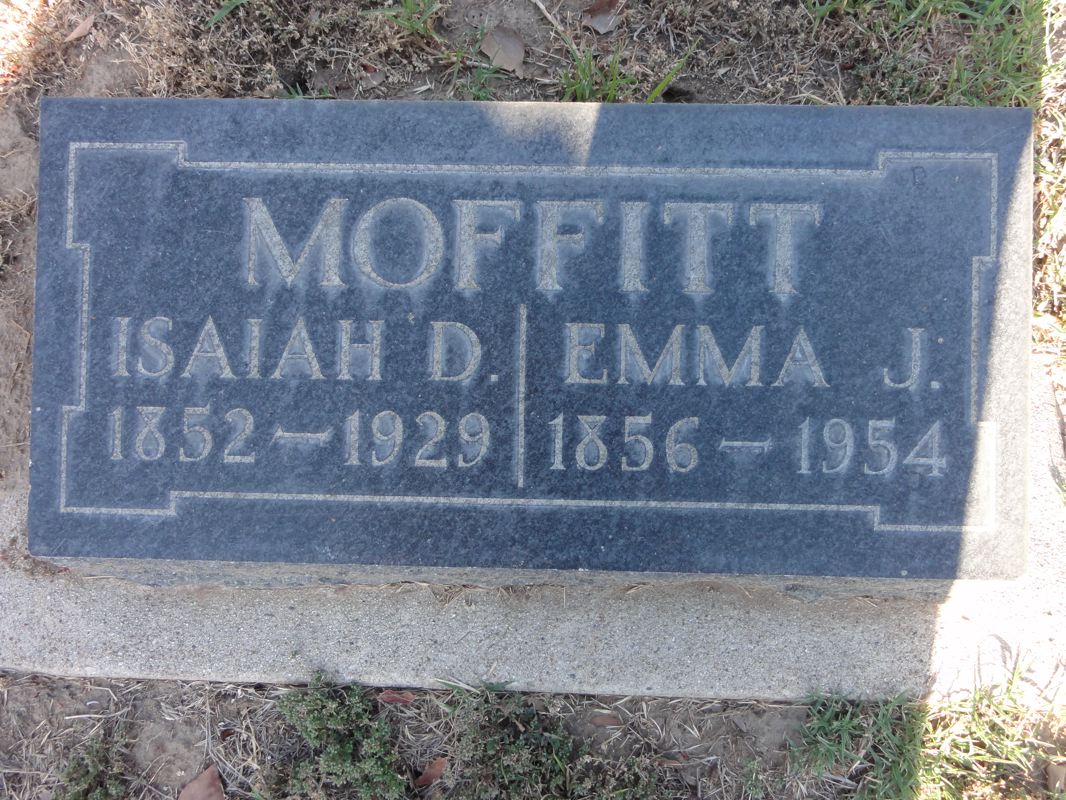 Special Thanks: To Jerry Rushford. I was able to visit in the home of Jerry and Lori Rushford in late June, 2012. I was just returning from a mission trip to the Fiji Islands, and had about a 30 hour layover in Los Angeles. The Rushfords were wonderful hosts, and Jerry was a great resource in assisting me in the finding of the grave of I.D. Moffitt. If visiting in the Los Angeles area, be sure to visit Pepperdine University in Malibu. Besides having a beautiful campus, be sure to visit the Church of Christ Historical Room, upstairs in the university library. Jerry Rushford has put much work through the years into preserving the history of the churches of Christ on the western coast of the United States of America.