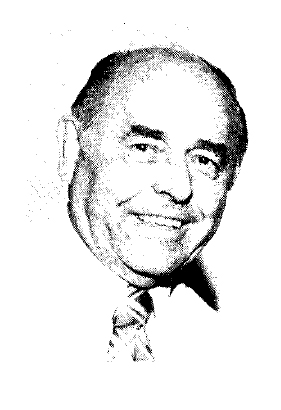 The Life Of Carl O. Flinn

He was born in Pinhook, a small community in Lawrence County, eight miles east of Bedford, Indiana, on August 12, 1905, and along with his brother, Orin Flinn, was baptized by Oliver M. Davis in a small stream called Deep Creek near his birthplace. He left very few records and it is not known how many sermons he preached, how many churches served and how many individuals he baptized-possibly in the thousands.

After graduating from Tunnelton, Indiana, high school, he was financially unable to attend college, but immediately started taking extension courses at Indiana University in public speaking. During that period he was successful in joining the U.S. Weather Bureau in New Orleans and also served them in Indianapolis and Chicago. It was during his three years with the weather bureau that he met Miss Clara Gentry in Indianapolis, and they were married June 30, 1927. They had one daughter, June Ann, who is now living in Simsburg, Connecticut.

Clara died January 26, 1973, of injuries sustained in a fall down a stairway in a meat market in Indianapolis. Both Carl and Clara were working on a food collecting project for their congregation when the accident occurred just before Christmas in 1972.

Flinn was a talented magician and staged many performances before audiences of children in the mid-west. He also worked for the Western Electric Company in Indianapolis for 45 years, retiring as Safety Director of the plant in 1975. He did not, however, retire from preaching.

He was proud of the fact that he had preached in nearly every church in Indianapolis at one time or another and served as permanent minister of many of them. However, he left no permanent records of his length of service at each place. A longtime friend, Ewing Poole, now retired in Punta Gorda, Florida, who also worked with Flinn at Western Electric for many years, furnished the following report as far as he could recall, of that period of time.

"Carl preached his first sermon at the Cruft Street Church of Christ in Indianapolis. It was located on Shelby Street. It was only a few months until the congregation managed to have a new church building built in what was known as Garfield Heights.

"After approximately three years, brother Flinn was hired by the East New York Street church and within a year they also built a new building called the Irvington Church of Christ. I don't recall how long he was at Irvington but he went from there to the Tenth and Park Street Church of Christ and was there nine years.

"For a time he worked at the Boyd and Bradley Church, moving next to the Keystone Church and then working with East Tenth, North Vernon, Lebanon, North Central, Belmont, Worthington, and Bedford.

"After spending three winters in Southwest Florida in the 70's, teaching and preaching at various churches, Flinn was induced to become minister at the LaBelle Church of Christ about 20 miles east of Fort Myers. He built the congregation from 19 members to an average weekly attendance of 65 in the three years he worked there."

His funeral was held at the Fountain Square Church of Christ and David H. Bobo, a long time friend, conducted the service. Burial was beside Clara in Memorial Park Cemetery in Indianapolis.

While Bobo was conducting the funeral in Indiana, another good friend, Wilbur A. Albright, minister of the Port Charlotte Church of Christ at that time, was holding a Memorial Service for Flinn at LaBelle.

In addition to the surviving daughter, Mrs. James (June Ann) Pohlman in Connecticut, he leaves a sister, Mrs. Doug M. (Edna) Smiley in Port Charlotte, Florida, and a brother, Orin Flinn, an elder at the Southland Church in Bedford, Indiana. Flinn's oft-repeated declaration that he would never quit preaching until he died actually proved true because, although in a semi-coma, he preached a 40-minute sermon from his death bed the night he passed away.

Prior to his fatal illness he had preached a weekly sermon on the LaBelle radio station and that night he was evidently fanticizing he was again "on the air" as close family members, along with Albright and hospital personnel, stood in awe as he proclaimed he had "fought the good fight" and urged those listening to let God take charge of their lives.

Carl Flinn, minister of the church in La Belle, Fla., died Sept. 22, 1981, after an illness of only two weeks. He was 76 years of age. His daughter, Mrs. James Pohlman, his sister Mrs. Doug M. Smiley, his brother Orin Flinn and three grandchildren survive him. Funeral services
were conducted in Indianapolis, Ind., on Saturday, Sept. 26, and burial was in Memorial Park East, of that city.

Directions To The Grave of Carl Flinn

From Downtown Indianapolis, take I-465 to exit 46, E. Washington Street, and go east about two miles. The cemetery will be on the left. NOTE: Do not be confused when seeing the first cemetery you come to which is called Memorial Park Cemetery. Continue past it and Washington Square Mall. Then enter to your left, Washington Park Cemetery East. See specific location on Google maps below. 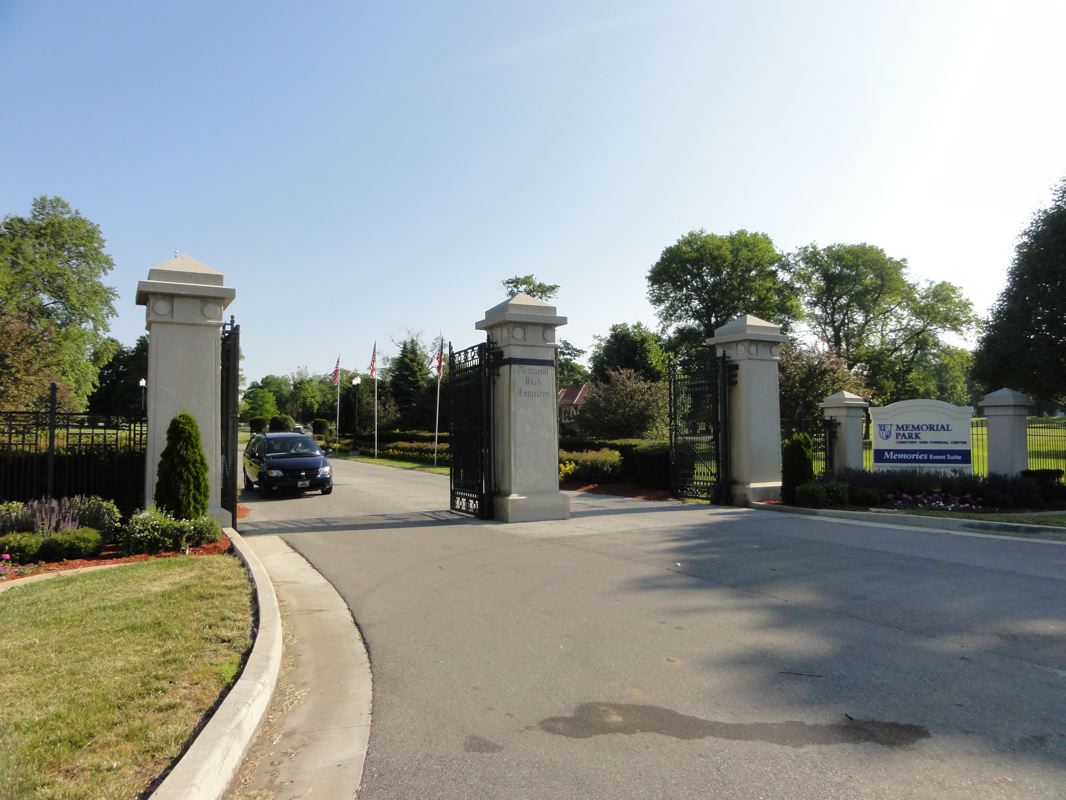 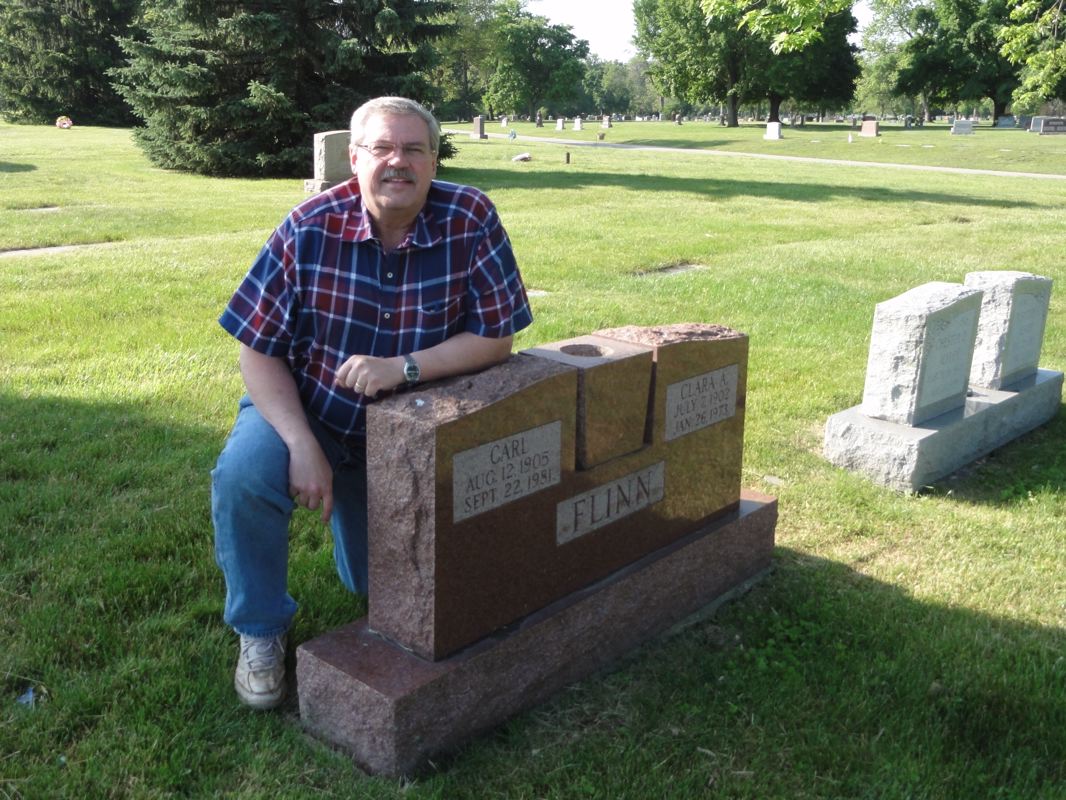 Scott Harp at the grave of Carl and Clara Flinn 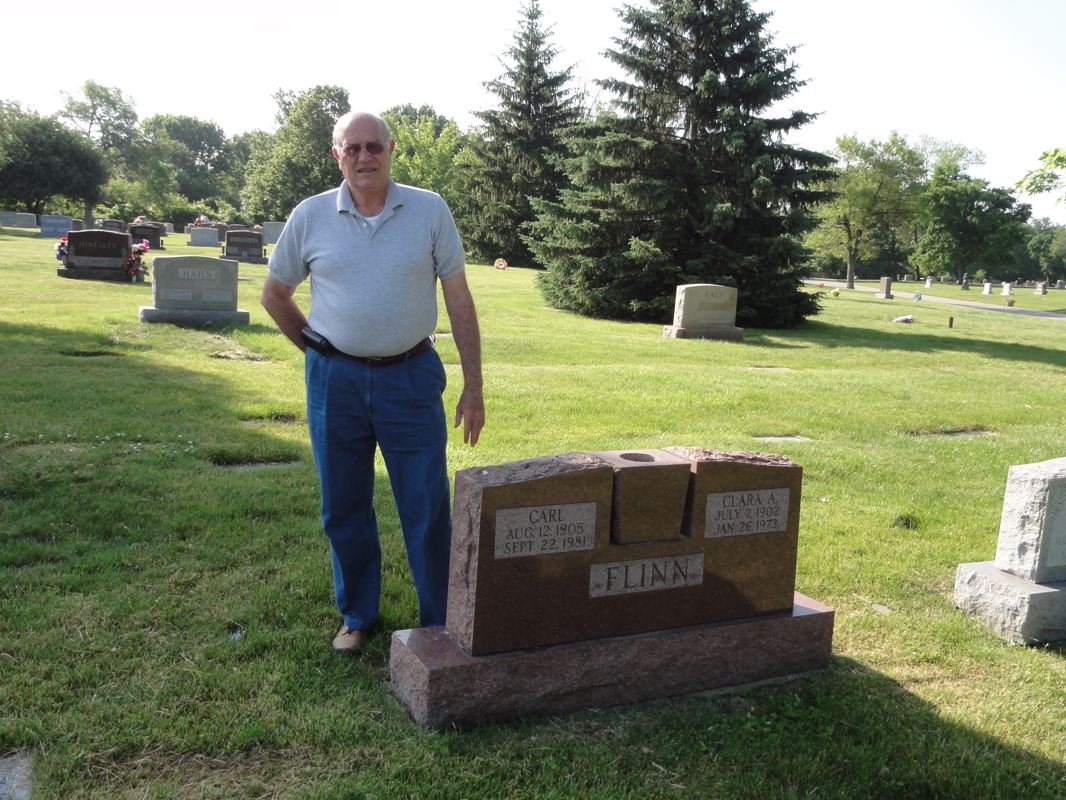 Tom L. Childers at the grave of Carl and Clara Flinn 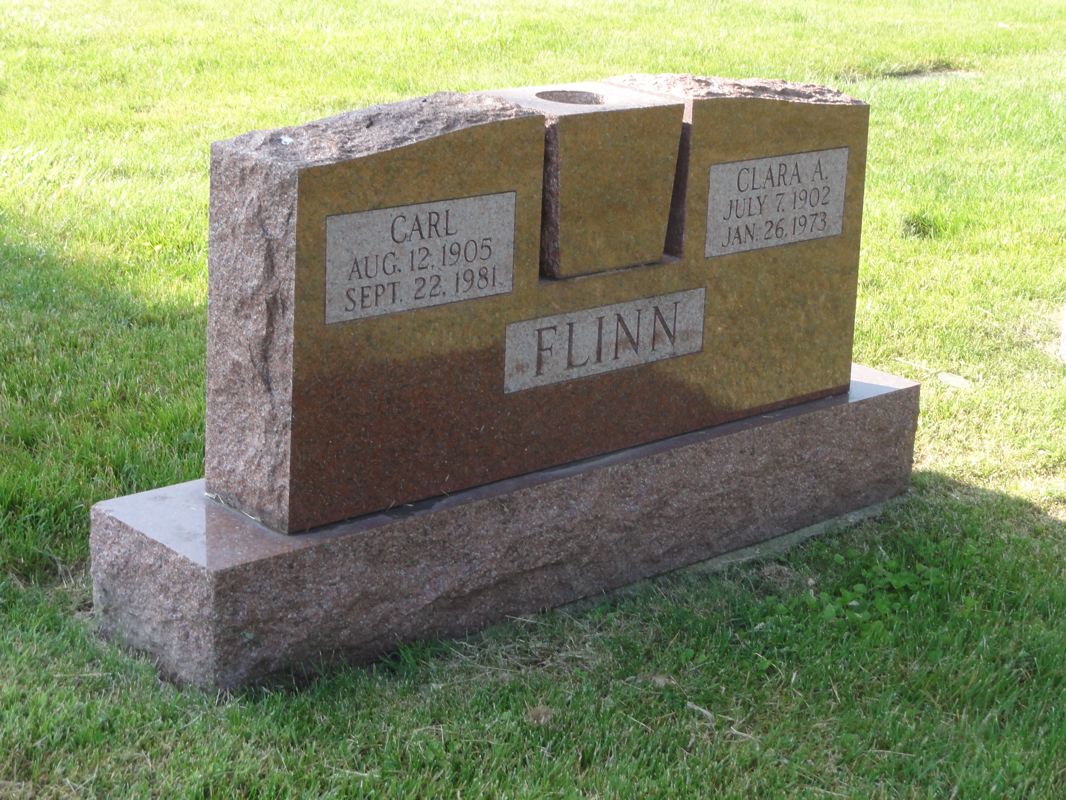 Web Editor's Note: On May 23, 2012 I visited the grave of Carl Flinn. It was the third day of a week's Restoration Research trip with my dear friend Tom L. Childers. Special thanks to Tom for doing the driving on this trip and taking photos along the way.