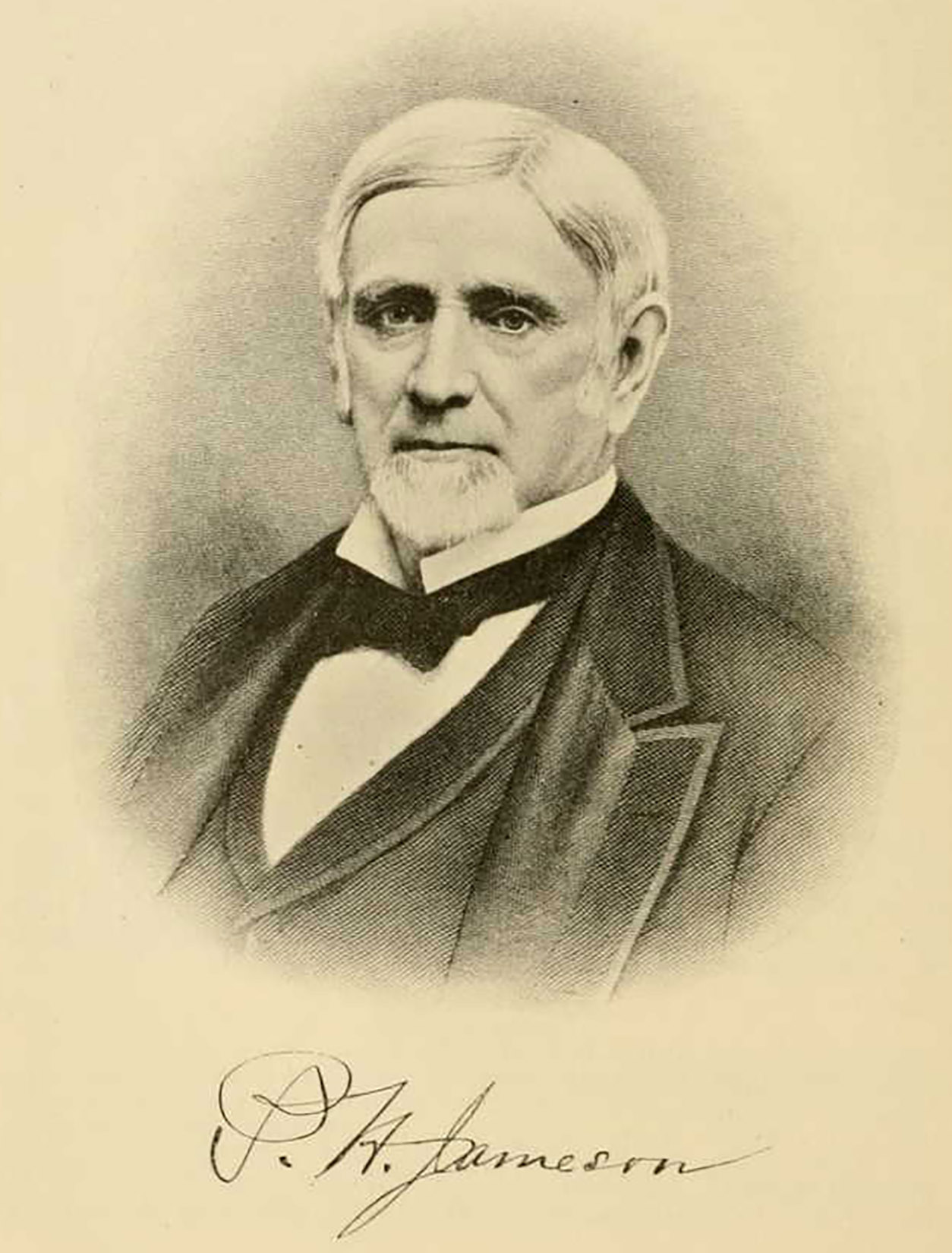 Sketch On The Life Of Patrick H. Jameson

Patrick Henry Jameson (1824-1910) was the brother of Love H. Jameson and the son-in-law of Ovid Butler. After teaching school for four years he studied medicine with Dr. John H. Sanders of Indianapolis. Later he received his degree in medicine from the Jefferson Medical College of Philadelphia and returned to Indianapolis where he organized the post hospital at Camp Morton. He served two terms as a commissioner to the Indiana Hospital for the Insane and in 1866 drafted and procured enactment of an ordinance for the establishing and maintaining of Indianapolis City Hospital. He was the agent for the sale of the large realty holdings of North Western Christian University in Indianapolis and the prime mover for the transfer of the University to the Irvington campus. He was a director of Butler University for thirty years and a respected and able man. John M. Judah, his son-in-law, was treasurer of Butler University in this transition period.

Biographical Sketch On The Life Of Patrick H. Jameson

Patrick H. Jameson, M. D. Dr. Jameson was born in Jefferson county. Indiana, on the 18th of April, 1824. He received the most of his education at the hands of his parents by the family fireside. His parents were intelligent Virginians, and took pride in teaching their son the rudiments of an English education. The doctor tells me he never went to a regular school but twelve or fifteen months.

He came to Indianapolis in 1843, and four years taught school. In 1846 he entered the office of Doctors Sanders & Parry as a student of medicine. In 1849 he graduated at the Jefferson Medical College, Philadelphia, then located in practice of his profession in this city in partnership with Doctor John H. Sanders. This partnership was of short duration, as Doctor Sanders died on the 4th of April, 1850. On the 20th of June, 1850, Doctor Jameson was married to Miss Maria Butler, daughter of Ovid Butler, Esq., of this city.

After the death of Doctor Sanders, Doctor Jameson practiced alone until 1858. He then formed a partnership with Doctor David Funkhouser, of this city. This last partnership lasted seventeen years, and was eminently satisfactory and beneficial to both its members.

On the 17th of April, 1861, he was appointed by Governor O. P. Morton, and in connection with Doctor J. M. Kitchen, to the surgical charge of the Indiana State troops and unassigned volunteers quartered and in hospital in and near Indianapolis. In this position he continued until the close of the war.

On the 1st of April, 1861, he entered upon the duties of Commissioner of the Hospital for the Insane, having been previously elected by the Legislature; he was re-elected in 1865 for another term of four years. In 1863 was elected a member of the common council of the city, re-elected several times, and continued to serve until 1869; a greater portion of the time he was chairman of the finance committee. He was chairman of the committee for the revision of ordinances from 1863 to 1865, and as such supervised the getting up a revised edition of the ordinances of the city; he was also chairman of the committee on printing. In 1869 was elected by the Legislature president of the boards of State benevolent institutions, which position he now holds, having been since twice re-elected without opposition.

He has been for some years connected with the management of the Northwestern Christian University. For five years past has been president of its board of trustees. As building agent he erected the new college building at Irvington. Doctor Jameson is one of the principal stockholders and a director in the old Indianapolis Insurance Company, now known as the Bank of Commerce.

In the winter of 1875 Dr. Jameson was appointed by the Legislature a member of the provisional board for the construction of the department of the Insane Asylum intended for women; this board has six members, of which Governor Hendricks is, ex-officio, president. On the organization of this board Dr. Jameson was elected its treasurer. Although the doctor has so many laborious and responsible positions, he still is actively engaged in the practice of medicine in connection with his nephew and former student, Dr. Henry Jameson of this city. In view of all the positions of honor or emolument which have been conferred upon Dr. Jameson, it would be supererogation in me to speak of the estimation in which he is held by his many friends in this city. Suffice it to say that no man stands higher as a benefactor of the public.

Directions To The Grave Of Patrick H. Jameson

P. H. Jameson is buried in the Crown Hill Cemetery, Indianapolis, Indiana. Traveling On I-65 North Out Of Downtown Indianapolis, Indiana Take The Dr. Martin Luther King Street Exit - Exit 117. (Note: If you cross White River, You Have Gone Too Far) Go North On Dr. Martin Luther King Street. Turn Right On West 32nd Street. Cemetery Will Be On Your Left. Go Until The Road Dead Ends Into Boulevard And Turn Left. There Will Be An Entrance To The Cemetery As You Cross The 34th Street Intersection. Turn Left Into The Cemetery. Lot 18, Section 6. Jameson's grave is in the same section as father-in-law, Ovid Butler. See map of cemetery here! 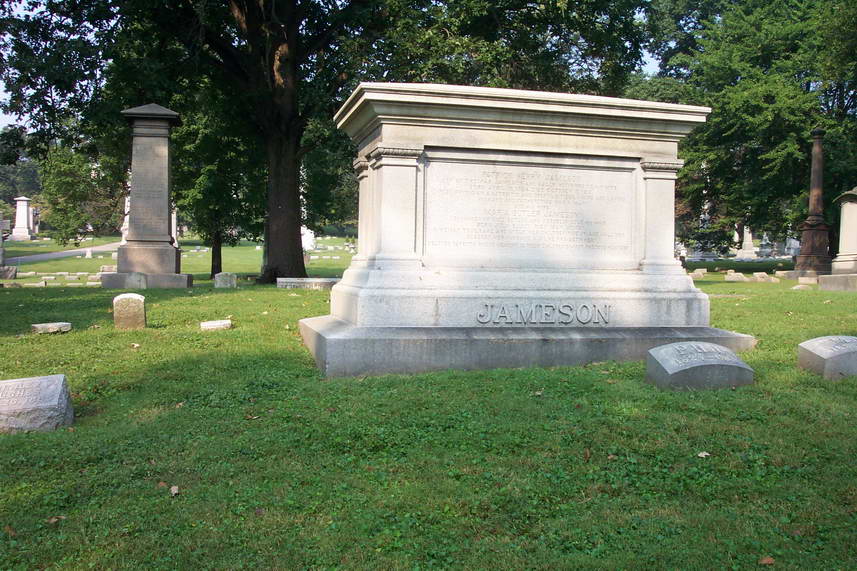 Note Butler Plot To The Left 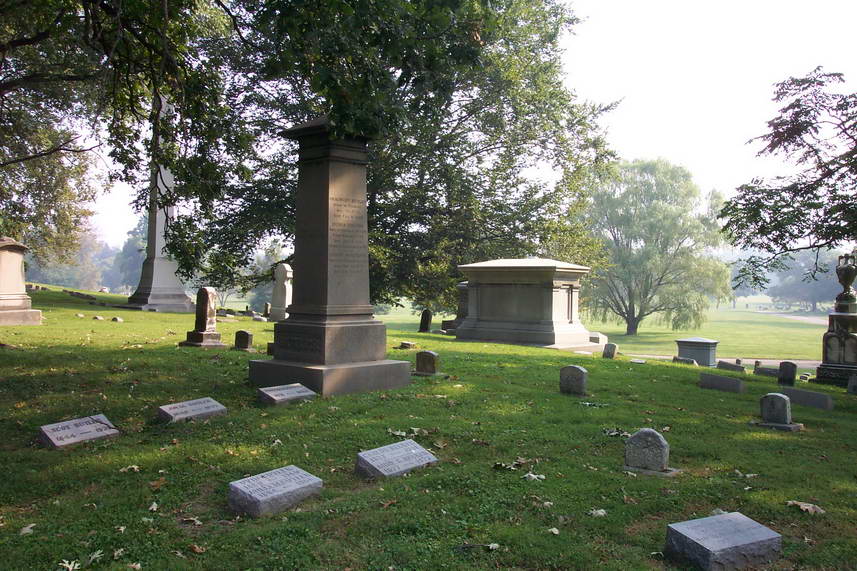 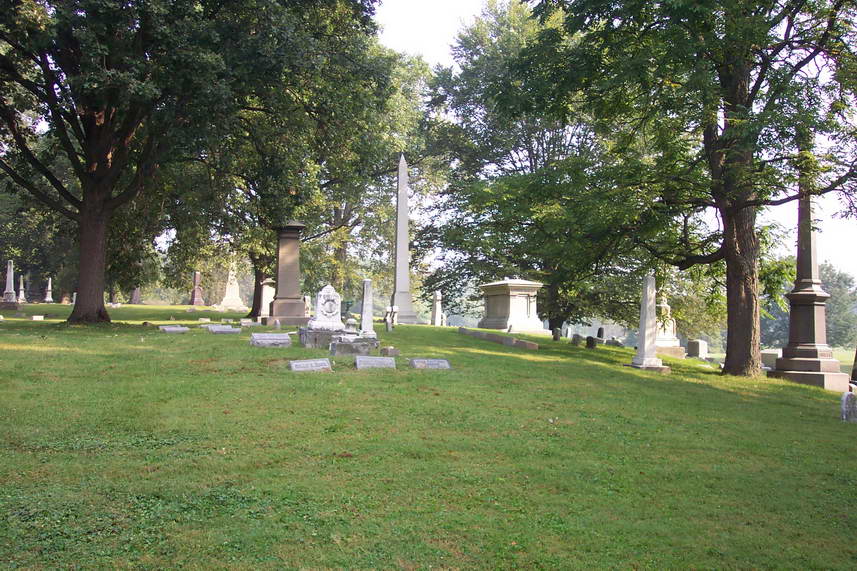 Patrick Henry Jameson
Son Of Thomas Jameson And Sally Humphreys, His Wife
Born April 18, 1824, Died October 7, 1910.
A Wise Physician, A Patriotic And Useful Citizen, A Kind And Loving
Husband And Father. "This Was A Man."
And His Wife
Marie Butler Jameson
Daughter Of Ovid Butler And Cordelia Cole, His Wife
Born July 5, 1831, Died May 30, 1911.
A Woman, True, Rare and Noble "Her Children Rise Up And Call Her
Blessed, Her Husband Also, He Praiseth Her"
Beloved Parents Whose Memory Is Their Children's Most Precious Heritage