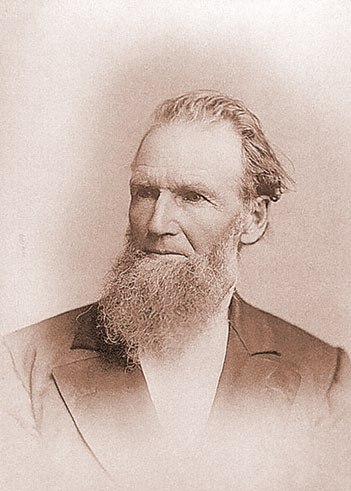 Biographical Sketch On The Life Of Pardee Butler

Pardee Butler was born in Marcelles, (now known as Skaneateles), Onondaga County, New York, March 9, 1816. He was the second of seven children born to Phineas and Sarah Pardee Butler. The family moved to Wadsworth, Ohio in the fall of 1818 where his father worked to clear the heavy timber to build a home for the family. With the sure shot of his rifle, he became a famous hunter in those parts, providing food not only for his own family, but managed to save many of his own neighbors from starvation as well.

Young Pardee showed himself at an early age to be astute. He started school when he was three years old. When the Wadsworth Academy was established in 1830, he was one of its first students. His desire to learn, and the challenge of the personal feeling that he was slow of speech, spurred him on to study harder. He fell under the influence of Judge Brown, the uncle of the famous anti-slavery proponent, John Brown. His strong stand against slavery and temperance in later years, perhaps finds its roots in this relationship.

In September, 1833 Alexander Campbell came to Wadsworth to attend a big meeting in William Eylie's barn. The young Butler had heard of the sage of Bethany through the Millennial Harbinger, and greatly desired to hear him. He attended many of Campbell's meetings and was strongly affected. It was nearly two years later, June, 1835, that he and his uncle Aaron Pardee were immersed into Christ for the remission of their sins by Elder Newcomb in a stream on Newcomb's farm. He heard many preachers on the Western Reserve such as William Hayden, Calvin Smith, Walter Scott, David Purviance and others.

At about the age of twenty, Pardee began sharing the knowledge he had learned over the years by teaching school in neighboring districts around Wadsworth. The following year, 1837, he began preaching the old time gospel, but was not ordained until 1844 in Sullivan, Ashland County, Ohio.

In 1939, he with his parents and family moved to Sandusky Plains, Ohio where he herded sheep in the summer, taught school in the winter, and preached where he was able. There was a small church in Letimberville where they attended and he would preach from time to time. While in the area he set out to memorize the New Testament, and was able to quote many chapters at a time. He was good to be able to hear a verse and be able to tell you where the book, chapter and verse was found.

From time to time he would go back to Wadsworth for a visit. He would stop in Sullivan to preach. It was there that he made the acquaintance of Sibil S. Carleton, the daughter of Joseph Carleton, a leading member of the church. On August 17, 1843 they were married.

At the age of thirty-four his health was not good, the harshness of the weather and land where they lived was the culprit. Even his parents had died due to the extreme elements. Pardee even had to give up preaching because of a terrible sore throat. So, it was decided that a move to a better climate would be most helpful. The family pulled up stakes and moved to Posten's Grove, Cedar County, Iowa. It was the spring of 1850. He bought some acreage and intended to farm there, but the local congregation, Long Grove, about sixteen miles distant, found out that he could preach. As his health improved he began preaching more and more. He taught school, and preached at Long Grove from time to time. He was employed as a traveling evangelist in east and southeast Iowa. Many hours he studied the word of God. By this time he could quote nearly the whole New Testament, and his knowledge the Old Testament was so good that he could reveal the most minute details of historical facts. The following years until 1855 found him away from home much of the time, fulfilling his evangelistic obligations. He preached much in both Iowa and western Illinois.

In July, 1854 tragedy struck the Butler family in the death of a young daughter. The following spring he sold his Iowa farm and left for Kansas. His family staying with a brother, Gorham, near Canton, Illinois. He entered Northeast Kansas and staked out 160 acres of land to settle in Atchison County, later known at Pardee, Kansas. The move to Kansas would prove to be a challenge. His abolitionist views ran deep, and his move to a pro-slavery state would prove to be a strong test of will.

It was June, 1855 he called a meeting of Christians at the home of Caleb May, his neighbor, on the banks of Stranger Creek. There he preached the old-time gospel. But it was not until the next year, in July, that Duke Young, a pioneer preacher of western Missouri was in the area and established the first church of Christ in Kansas there on Stranger Creek. It was known as the Mt. Pleasant Church, and later known as Round Prairie Church. Now only a small cemetery is there, known as Round Mound Cemetery.

With the church set in order, and a cabin built on plenty of land, it was time to return to Illinois to gather his family and move them to their new home. He traveled east to Atchison (years later the birthplace of Amelia Earhart), where he was to catch a steamboat on the Missouri River back to Illinois. On August 17, 1855, while waiting to board the steamship, he was conversing with some people when the subject of slavery came to be discussed. He expressed his views that slavery was wrong and should be abolished. This brought about much unrest, for the next day a group of men confronted him with a document to sign claiming to be pro-slavery. He refused to sign it. The result was that he was dragged to the river to be either hanged or drown. It was decided to set him adrift on a small raft, surely to be killed by the torrid river. They tied two logs together, painted a big "R" (standing for "rogue") with black paint on his forehead and towed him out to the middle of the Missouri River, and let him go. As he departed he said, "Gentlemen, if I am drowned I forgive you; but I have this to say to you: If you are not ashamed of your part in this transaction, I am not ashamed of mine. Good-by."

As he was floating he looked back and noticed a flag that had been tied to a makeshift flagpole with the words, "GREELEY TO THE RESCUE: I HAVE A NIGGER. THE REV. MR. BUTLER, AGENT FOR THE UNDERGROUND RAILROAD." This was a reference to Horace Greeley, the abolitionist editor of the New York Tribune, who articles were most unaccepted by the Kansas pro-slavery crowd. Butler took a pin-knife and tore the flag down. Then he cut the makeshift flagpole and fashioned an oar. He had traveled a few miles south of Atchison before putting in on the Kansas side of the river, without a scratch. He finally working his way back to Illinois.

After returning with his family in 1856 his abolitionist views continued to be heard throughout the area. On one occasion he was mobbed and beaten with thirty-nine lashes. On March 30th of that year he was tarred and cottoned (for lack of feathers). During the Civil War, "Bleeding Kansas," as it was referred to, endured many battles between north and south before become a free state. Pardee Butler's voice was heard in the midst of the fray.

In 1858 Butler was hired by the Kansas Missionary Society to be the state evangelist. From his first sermon in Kansas, until his last, thirty years later, over 29,000 souls were added to the body of Christ.

Within five years of the end of the Civil War, Butler could see the destruction that the liquor trade had on the people of his state. He supported an amendment to the constitution prohibiting the sale of alcoholic beverages. In 1872 he was urged to run for public office, but turned it down by saying, "A Christian preacher is the highest office on earth." Though his first love was the church and the preaching of the old-time gospel, he loved his community and sought to help it in any way. He helped organize the Republican party in Kansas, and involved himself in whatever way he could.

Pardee Butler continued his influence for good among community and the church at large until his death at the age of 72. On September 19th, 1888 he was going to ride a colt over to the post-office. He had spent years in the saddle, and knew horses well. On this occasion, the colt he mounted bolted before he had the bridle in hand. As he was quickly dismounting, the colt kicked and crushed his ankle joint. They called the doctor and thought he would get better, but with each passing day infection set in causing high fevers. For the next month his health grew worse and worse. On October 19th at half-past three in the morning, he slipped into immortality. His body rests in the old cemetery at Pardee, near Cummings, Kansas. 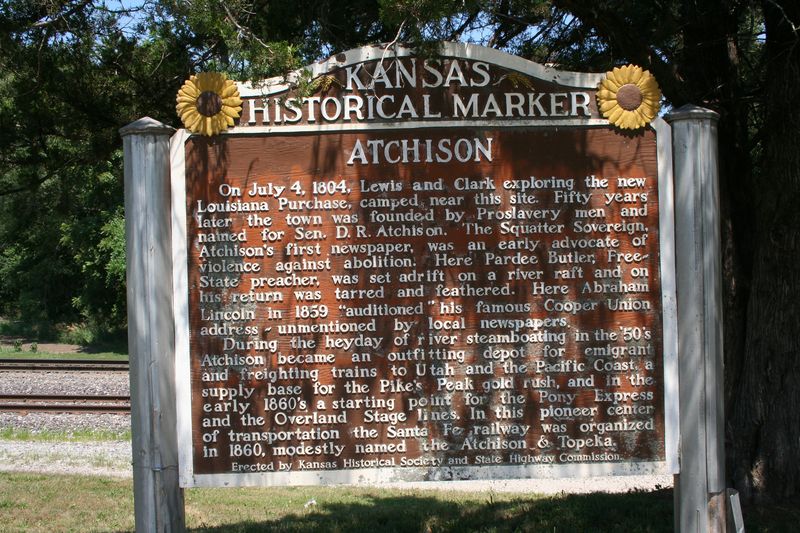 On July 4, 1804, Lewis and Clark exploring the new Louisiana Purchase, camped near this site. Fifty years later the town was founded by Proslavery men and named for Sen. D. R. Atchison. The Squatter Sovereign, Atchison's first newspaper, was an early advocate of violence against abolition. Here Pardee Butler, Free-State preacher, was set adrift on a river raft and on his return was tarred and feathered. Here Abraham Lincoln in 1859 "auditioned" his famous Cooper Union address ~ unmentioned by local newspapers.

During the heyday of river steamboating in the '50s Atchison became an outfitting depot for emigrant and freighting trains to Utah and the Pacific Coast, a supply base for the Pike's Peak gold rush, and in the early 1850's a starting point for the Pony Express and the Overland Stage lines. In this pioneer center of transportation the Santa Fe railway was organized in 1860, modestly named the Atchison & Topeka.

Directions To The Grave Of Pardee Butler

Pardee Butler is buried in the Pardee Cemetery, in the small village of Pardee, Kansas, near Cummings. Cross the Missouri River from St. Joseph, Missouri is the city of Atchison, birthplace of Amelia Earhart. (If in the area be sure to visit her childhood home which overlooks the Missouri River, just north of town.) Head west out of Atchison on Hwy. 59/4 about 10.4 miles to the small township of Cummings. Stay on Hwy. 59/4 through Cummings and take your first right after the township on Lincoln Rd. Take a left on the second road you come to, 242nd Rd. Then take the second road to the right. The Pardee Cemetery should be just up on the left. The grave is located in the central rear part of the cemetery. The GPS location of the cemetery is: 39°29'29.6"N 95°17'10.3"W / or D.d. 39.491557,-95.286182


The Cemetery Where Pardee Butler Is Buried Is Located On
The Land Which He Owned Near Cummings, Kansas
Map Courtesy Of www.Expedia.com 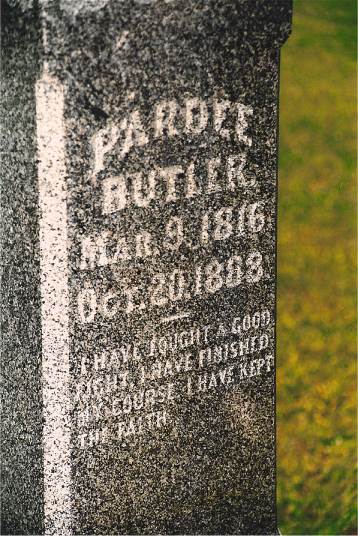 Special Thanks Are Extended To Paul and Mary Ann Garrett Of Barberton, Ohio For Providing Pictures And Location Of The Final Resting Place Of Pardee Butler.