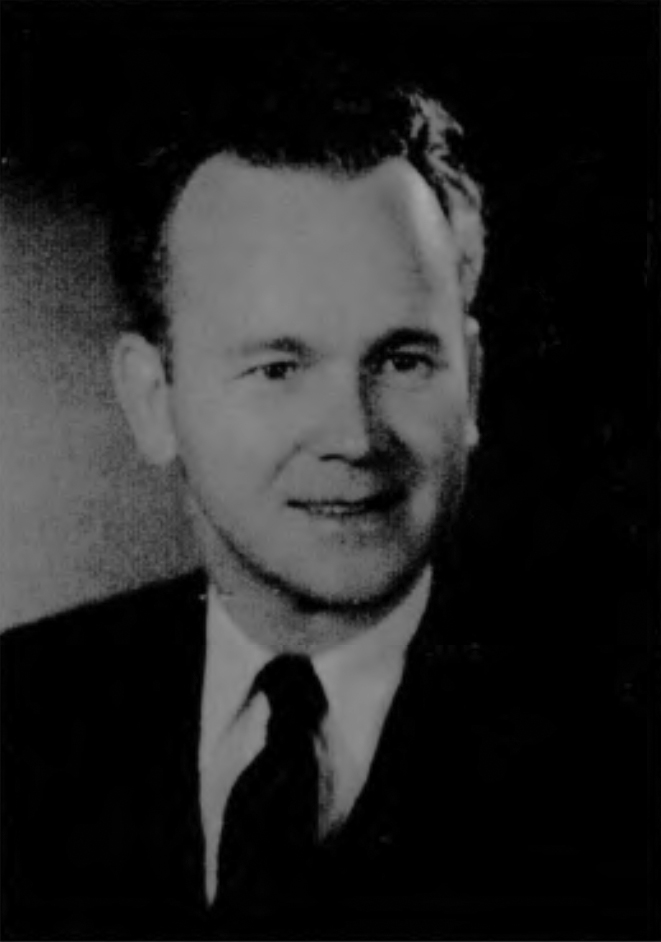 A Personal Note - In Honor Of A Fallen Mentor

In my “Note from the Editor” in the December 1999 issue of Reason & Revelation, I wrote an article titled “On the Death of a Mentor,” in which I lamented the passing of Bobby Duncan, minister of the church of Christ in Adamsville, Alabama. During his lifetime, Bobby had indeed been a very special mentor to me (and, I might add, to several more young men as well). In my comments about Bobby, I mentioned that there had been other men who had exhorted a similar positive impact on my life. Included in that list were my late father, Dr. Charles A. Thompson, and Dr. Russell C. Artist. Not long ago, Dr. Artist passed away at the ripe old age of 89. During the months since, I have spent some time collecting information so that I could pay tribute to him in the pages of Reason & Revelation—which is exactly what I want to do in this month’s “Note from the Editor.”

Russell Charles Artist was born on January 5, 1911 in Francesville, Indiana, as the second son of Frances and Nellie Artist. Early on, he excelled in public speaking, and developed an interest in the German language (two talents that, unbeknownst to him, would serve him well later in life. In 1932, he graduated from Butler University with a baccalaureate degree in biology. That fall, he entered graduate school at Northwestern University in Indiana to work on his M.S. in paleoecology, which he completed in 1934. In September of that year, he was accepted into the doctoral program at the University of Minnesota, and completed his Ph.D. in botany in 1938. That same year, he accepted a teaching position at Amarillo College in the Texas panhandle (ironically, just 70 miles from my home town of Dalhart!). It was there that he met Alice Blanche Cathey, whom he married at Christmas time in 1939. In 1942, a daughter, Merrille (pronounced “mer-il-lee”), was born. In 1944, a son was born, but died at the tender age of only six weeks old. In 1943, Russell and Cathey (Alice Blanche’s nickname) moved to Salt Lake City, Utah, where he began teaching at Westminister College. It was while he was there, and attending a worship service at the local church of Christ at the insistence of his wife, that he met the well-known missionary, Otis Gatewood. The Gatewoods also had lost an infant son, which provided common ground for Otis and Russell. Dr. Artist obeyed the Gospel shortly thereafter, and in 1947 he moved his family back to Texas so he could teach biology at Abilene Christian College (now a university). But, by 1948, the Artists were on their way to do mission work in the two countries of Switzerland and Germany, where they established congregations of the churches of Christ. They worked with local orphanages, and assisted in the adoption of 19 children. He and Cathey adopted their own son, Tim, there as well—an event that always was a great source of joy for him.

In 1953, Dr. Artist joined the faculty of David Lipscomb College (now a university), where he taught for 23 years (13 as head of the biology department). During his younger years, as he ruefully admitted to me in a conversation between mentor and student, he had been a “dyed-in-the-wool” evolutionist. After his conversion, however, he was an indefatigable creationist who even authored a creation-centered biology text for his classes at Lipscomb. [He also was a major contributor to the respected creationist biology textbook, Biology: A Search for Order in Complexity, first published in 1970.] For over four decades, he traveled around the country, and around the world, speaking out against evolution and defending the biblical doctrine of creation. He deeply regretted ever wasted moment he had spent as an evolutionist, and devoted the rest of his life to turning people (especially young people) away from that atheistic world view.

Cathey died of cancer in 1963; Russell retired from teaching in 1976, having married Dora Smith in 1966. Dora passed away in 1996, and four years later, on December 24, 2000, Dr. Artist went to his heavenly reward as well. I spent almost twenty-five years at his side, during which he was untiring in his encouragement and unrelenting in his constructive criticism. He wanted me, he explained, to be “the very best.” That, of course, was impossible. For, you see, that designation belonged solely to him.

Russell C. Artist, 89, professor at Lipscomb University for 23 years, died Dec. 24, 2000. He was a professor of biology and had previously served as chairman of the department.

Artist was a member of the Granny White Church of Christ in Nashville. He was baptized by Otis Gatewood in 1946 and was a missionary in Germany and Switzerland for five years.

He began preaching in Salt Lake City, Utah, in 1946 and was a minister for churches in Nashville, Kettle Mills, Ostella, and Castilian Springs, Tenn.; and in Frankfurt, Germany. He was preceded in death by his first wife, Blanche; and his second wife Dora. He is survived by a son, Timothy; a daughter, Merrile Ann Byars; a sister, Ruth Murphy; four grandchildren and one great-grandchild. Nashville, Tenn.

Russell C. Artist is buried in the graveyard at Little Whippoorwill Baptist Church in Schochoh, Logan County, Kentucky. The grave location is shown on the GPS location below. 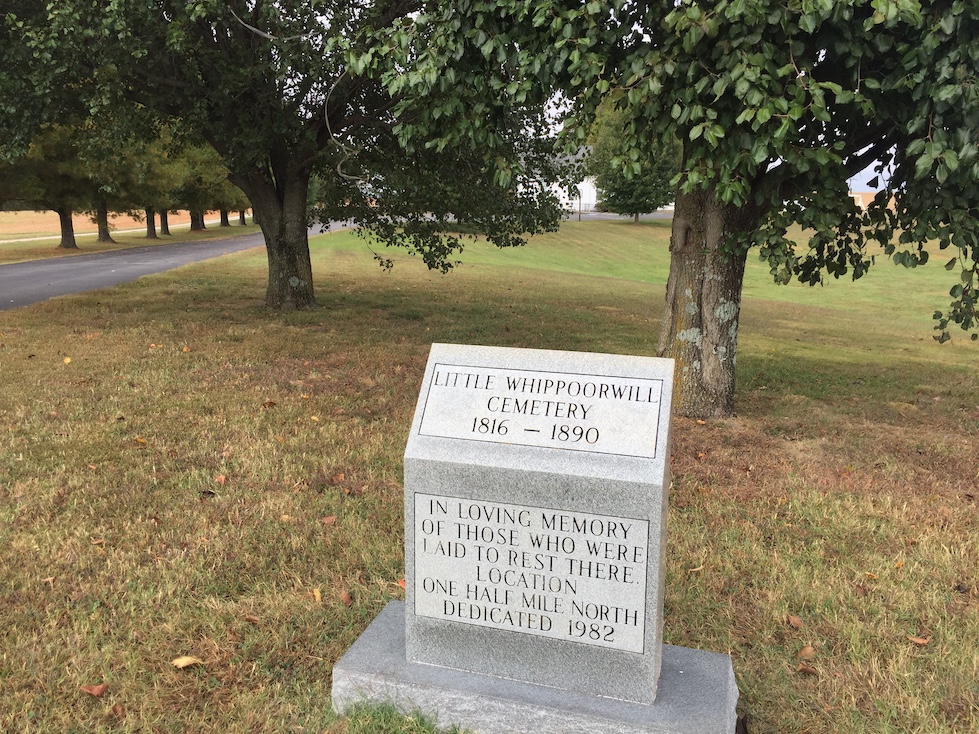 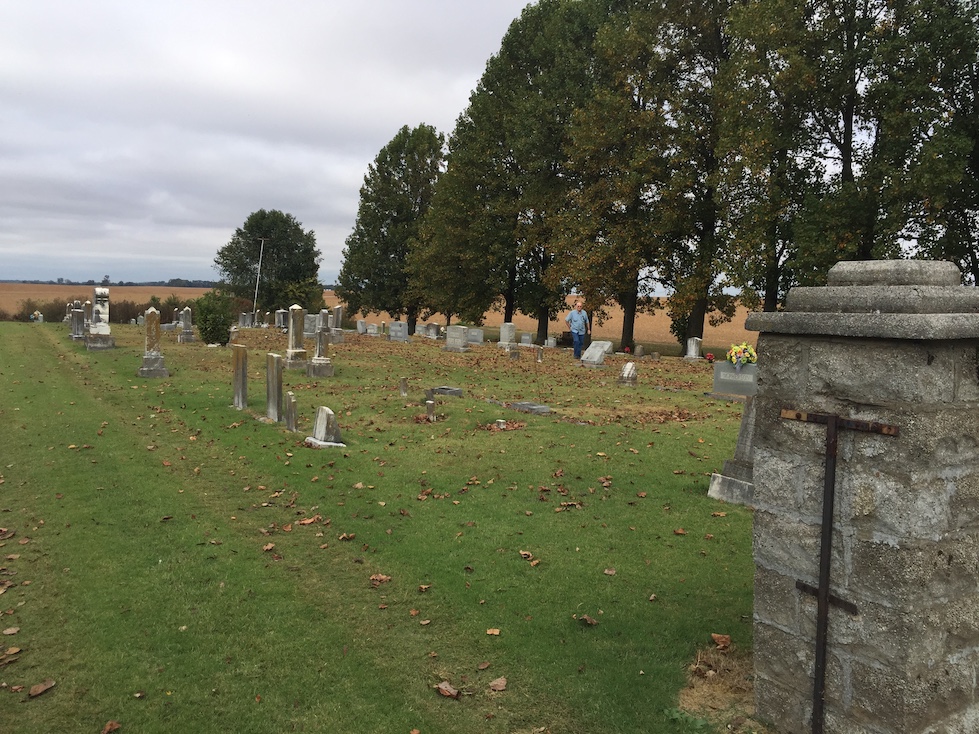 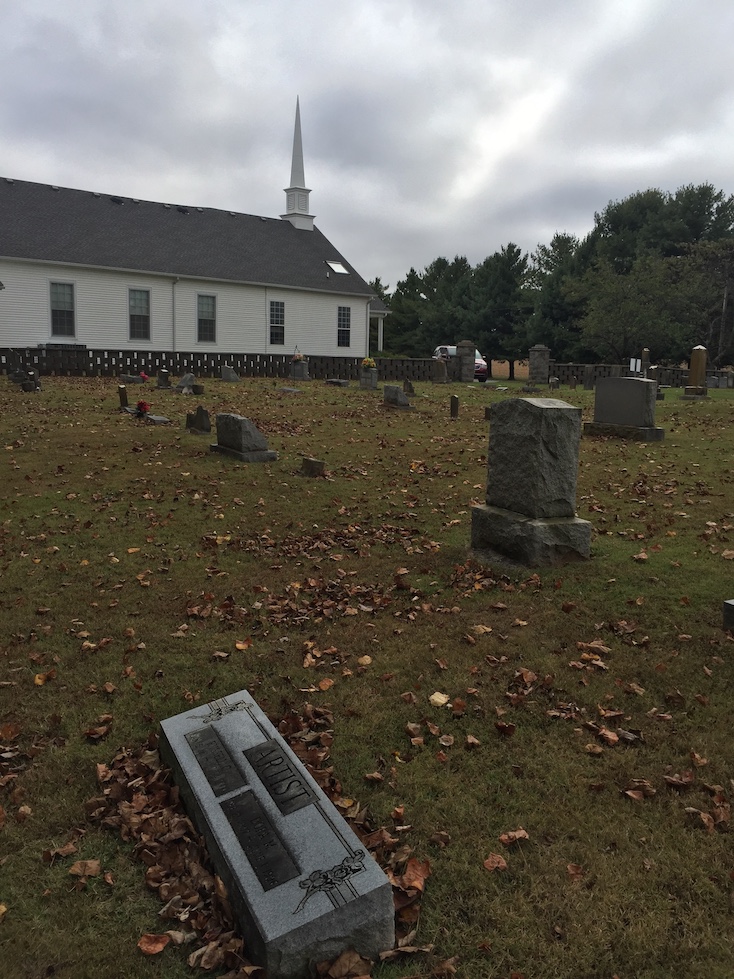 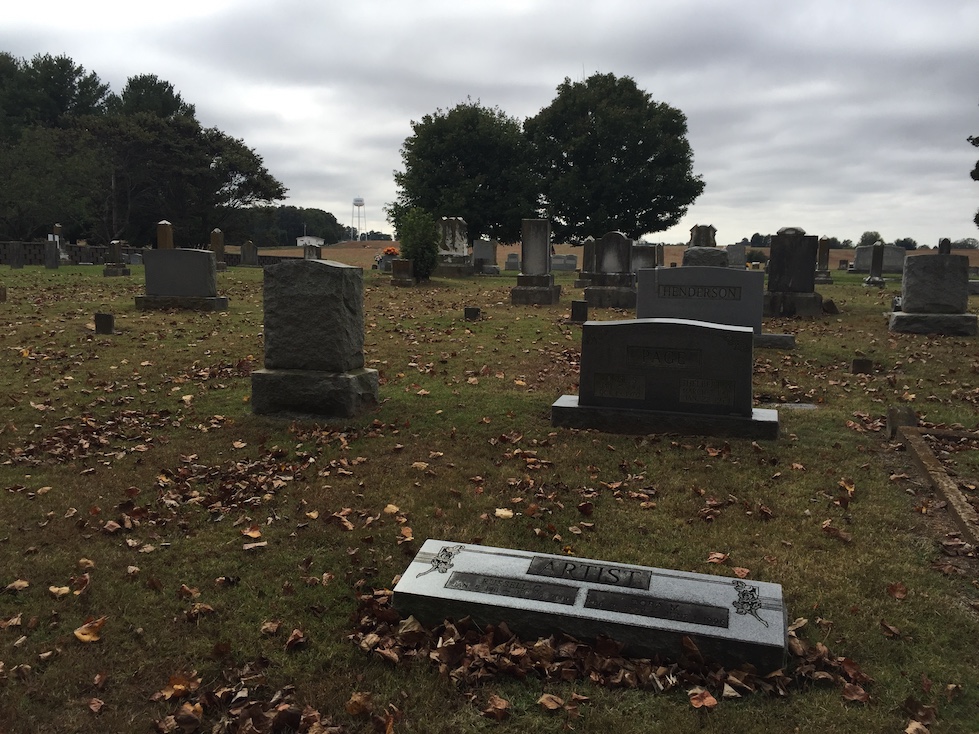 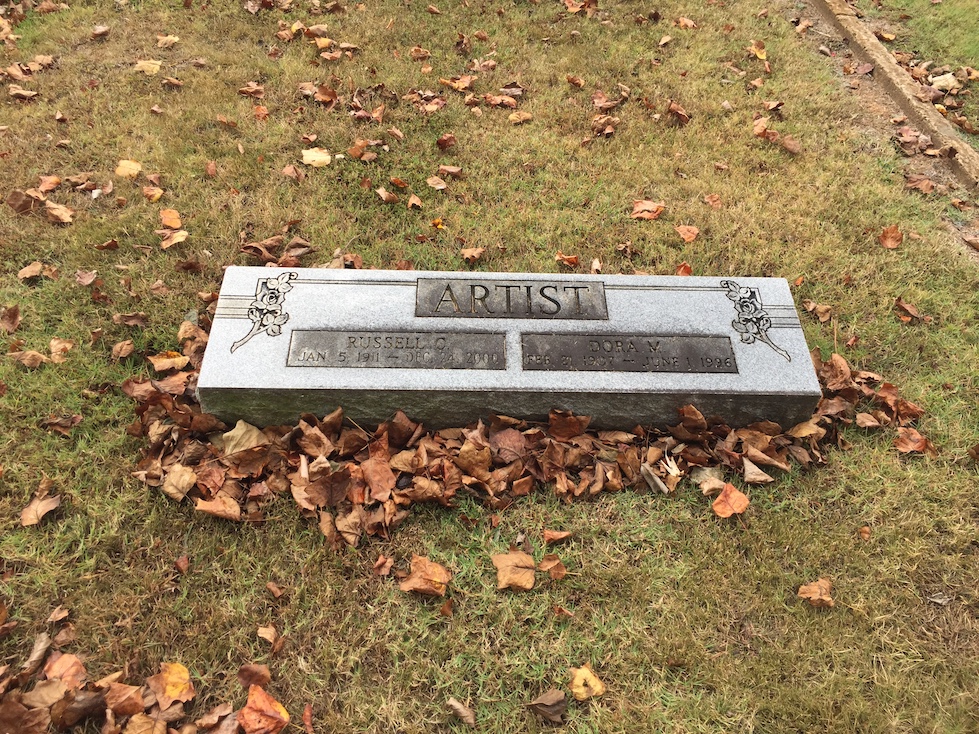 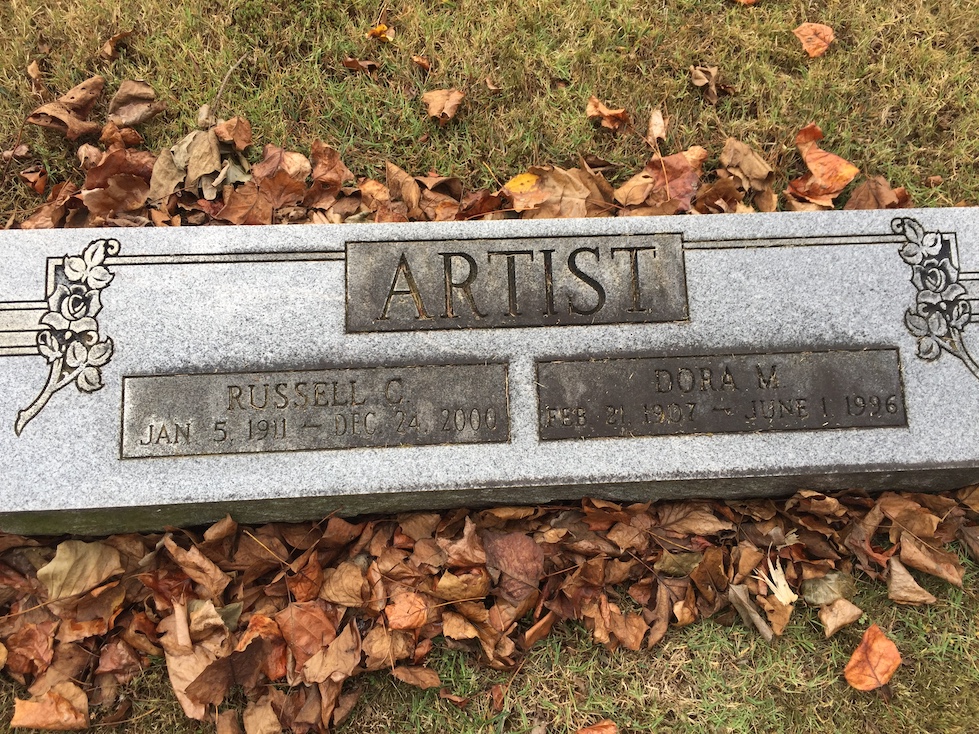 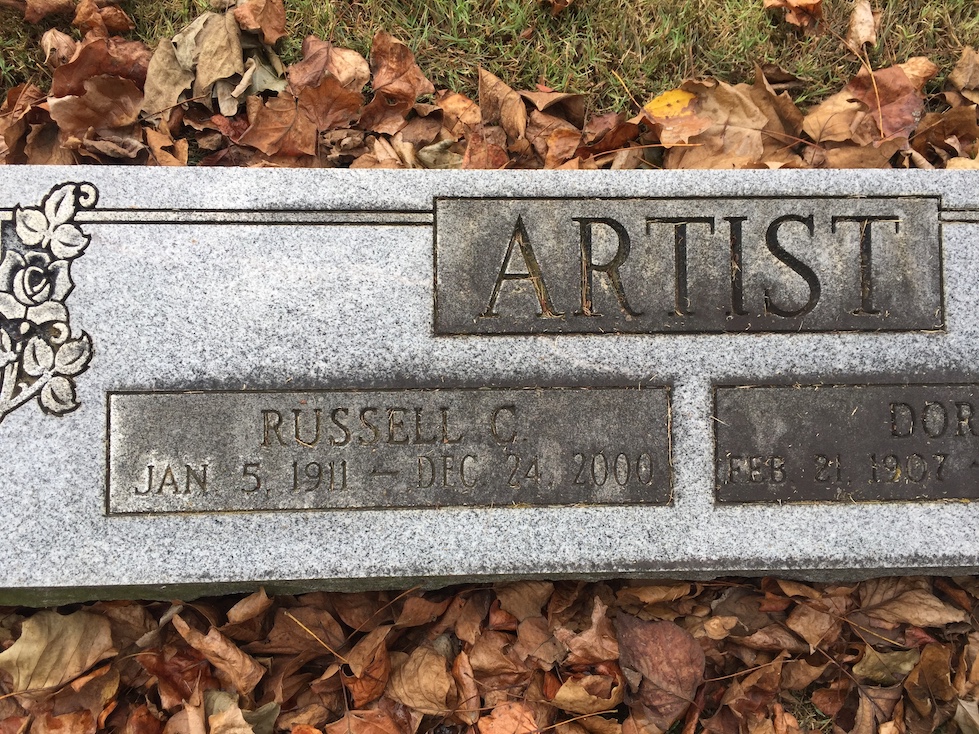 Special Recognition: Special thanks to C. Wayne Kilpatrick and Tom L. Childers who were with me for a couple of days in October 2016. We trecked through Logan County, and went up for a day to the Louisville area searching for graves of gospel preachers. It is always good to bring honor to the fallen soldiers of the cross.