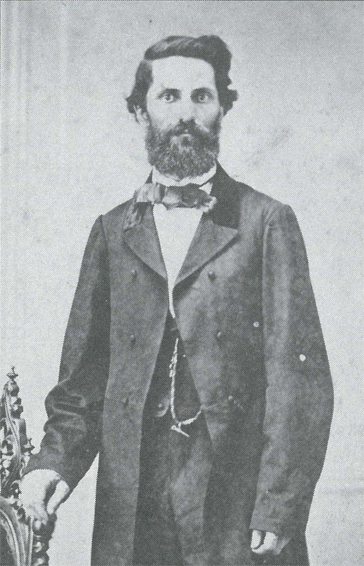 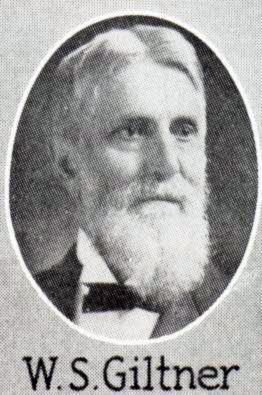 From the Official Board of the Christian Church

The Executive Board of the Eminence Christian Church takes this means of giving public expression to their appreciation of the splendid and devoted serv ice rendered to this church by our beloved brother, W. S. Giltner. For nearly forty-five years he was connected with its membership and never has there gone from us one whose heart and hand were more closely identified with its best interests. In all of the trials, its problems, its pastorless periods, it was W. S. Giltner who steps into the breach with his counsel and comfort. and with that unbounded faith in the power of prayer that was the secret of his splendid optimism and zeal. Never during all the years was he absent from the midweek prayer service unless thwarted by some unavoidable hindrance. He was God '5 true servant, first, last and always, equally content to be leader or to be among the humblest followers. He harbored no personal grudge nor suspicion but cherished toward all the love that is kind.

To Brother Giltner more than to any other one person we owe the beauty and comfort of our present church building. As chairman of the Building Committee he devoted almost his entire time to the work, laboring often with his own hands, and aside from a liberal donation to the building fund, met, many incidental and sometimes large expenses out of his own purse. When the work was threatened with difficulties he encouraged the workers and inspired the whole church with confidence in the final outcome. But the church building is not the only monument he has left us. As an elder he was efficient and untiring. As a brother in the congregation he was filled with that love that works out in character the quality of Godlikeness. As a friend he was fatherly and kind, giving freely of his means his kindness and confidence, always counting it a privilege to help others to the uttermost. He was truly an educator of the mind, heart and soul. Though forced to hold his membership elsewhere during the last years, we knew his great heart was ours and that it yearned over its old church home at Eminence with a love that could not be measured. We shall miss him, for his own unique place is empty; but we will rejoice in his transition to a better world toward which the fine influence of his earthly life shall ever beacon us. -Committee

Eighteen Hundred and Fifty-S ix through 1858 saw several second generation Dranes become members of the congregation and in October 1858, a young couple from Paris, Kentucky, who would profoundly affect the history, united with the group. Reverend W. S. Giltner and his wife. Lizzie, left an assistant pastor's position there under Aylette Rains to direct a private school on the outskirts of Eminence. Mr. Giltner was a graduate of Bethany College in West Virginia and an avid student of Alexander Campbell, its President.

The school was owned by local stockholders and was known as Eminence College. It was on the West side of Kentucky 55, about one mile South of the Christian Church. The school prospered under Revered Giltner and he later became the sole owner. He served the Church in almost every capacity, both from the pulpit and Official Board. His students attended Church and many became members. He was the guiding light and main inspiration of the construction of the present sanctuary (1878- 1879-1880).

The college closed in 1893, a victim of the growing number of tax supported school systems in the state. From 1893 forward. young people went elsewhere to be educated and most of them did not return.

Mr. Giltner had a profound effect on the Eminence Christian Church through his own actions, his three sons, his grandsons and great grandsons and their families. Though not a charter member, he would have to rank high as one of the pillars of the Church. 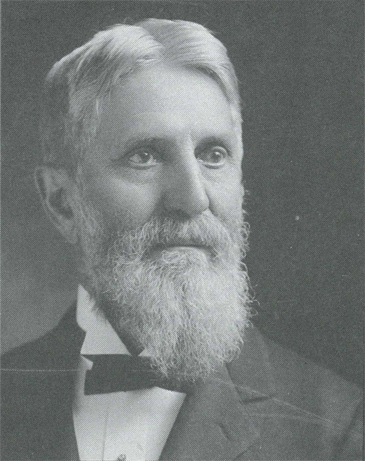 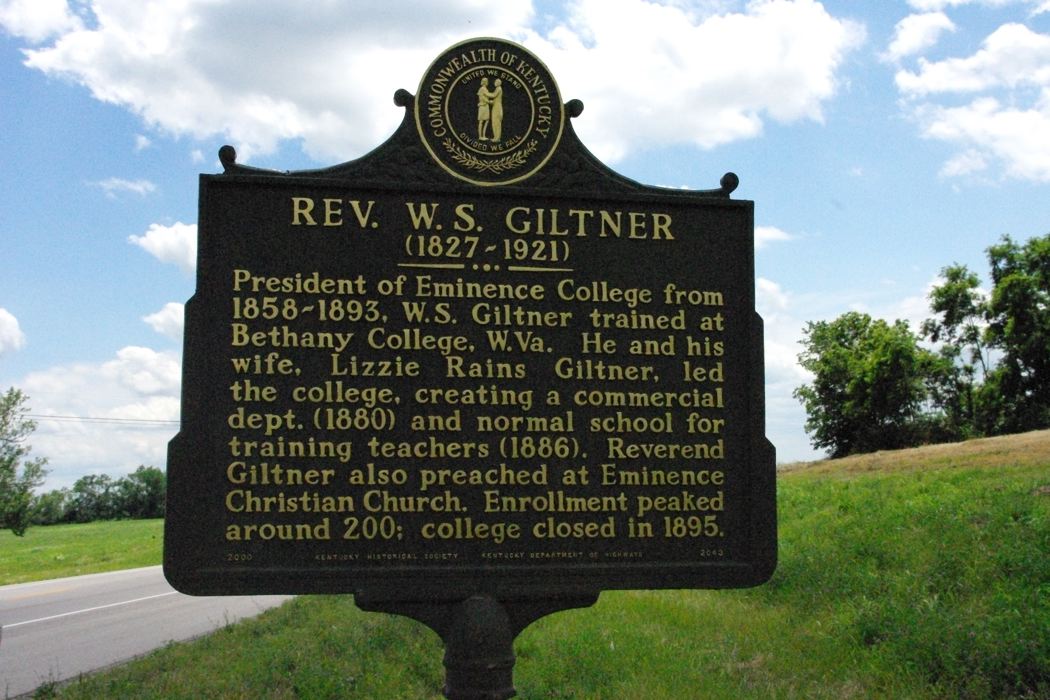 Eminence College, Kentucky, is about forty miles from the city of Louisville. Its situation is all that can be desired for an institution of learning, being removed from the evil influences of city life. The college is situated in the midst of an intelligent and moral community. The first session of Eminence College began in September, 1857. In this school also the coeducation of the sexes obtains. W. Giltner has been president from the beginning. The last session is reported as having been one of marked prosperity and success. The institution is self-sustaining. 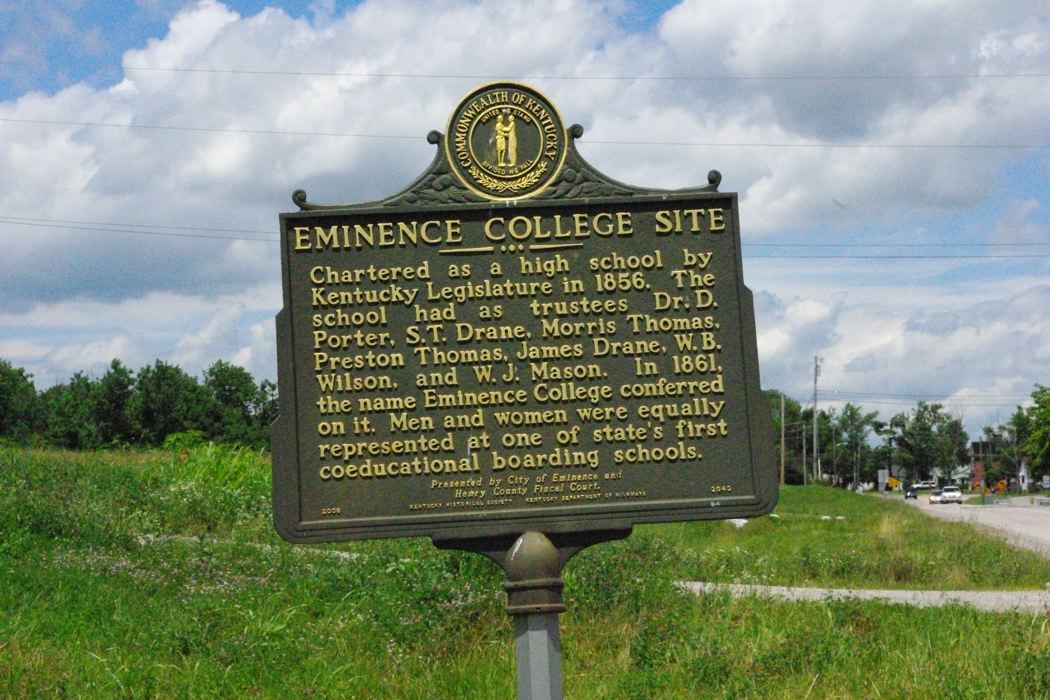 Eminence College, Ky., -W. S. Giltner, President. This institution is situated on the Lexington and Louisville R. Road, 25 miles from Frankfort. “It is in the country, and in the midst of an intelligent and moral community.” “It is a mixed school” -that is, for male and female; but, “by this, it is not meant that the girls and boys form one departrnent; on the contrary, each department is distinct.”

The entire school is, however, brought together in the chapel every morning, for prayer, reading the Scriptures, Lecture, &c.— We had the pleasure of visiting this school several years ago, while under the management of Bro. Mullins, and during its first session. It is one of the many Institutions that rise all over the noble State of Kentucky, as the enduring monuments of the liberality and Christian benevolence of our brethren, It has been built and furnished by their public generosity, and, we are happy to know, is, in the hands of our accomplished and faithful Bro, Giltner, likely to amply repay them, by i[s usefulness and success, all they have expended in founding it. Bro. Giltner graduated with us some six or seven years ago, with great credit, and in the deservedly high position to which he is steadily rising in the confidence and esteem of the public. is but fulfilling the promise of his College career. He has a very ample and efficient corps of assistants, and is liberally patronized.

Directions To The Grave Of W.S. & Elizabeth Giltner

Eminence Cemetery is located north of Shelbyville, Kentucky off I-64 (between Lexington and Louisville). Take State Hwy. 55 north. Just before entering the town of Eminence, the cemetery will be on the right. You will need to turn onto the side road to enter the cemetery. Once in the cemetery bear to the right and proceed to the southern end. As you bear around the southern end of the cemetery, look for a large stone with an angel on it. This is the Giltner monument. Just behind the Giltner monument are the graves of Aylette and Sarah Raines. Aylette Raines was the father-in-law of W.S. Giltner. Both of Lizzie's parents are buried in the same plot. 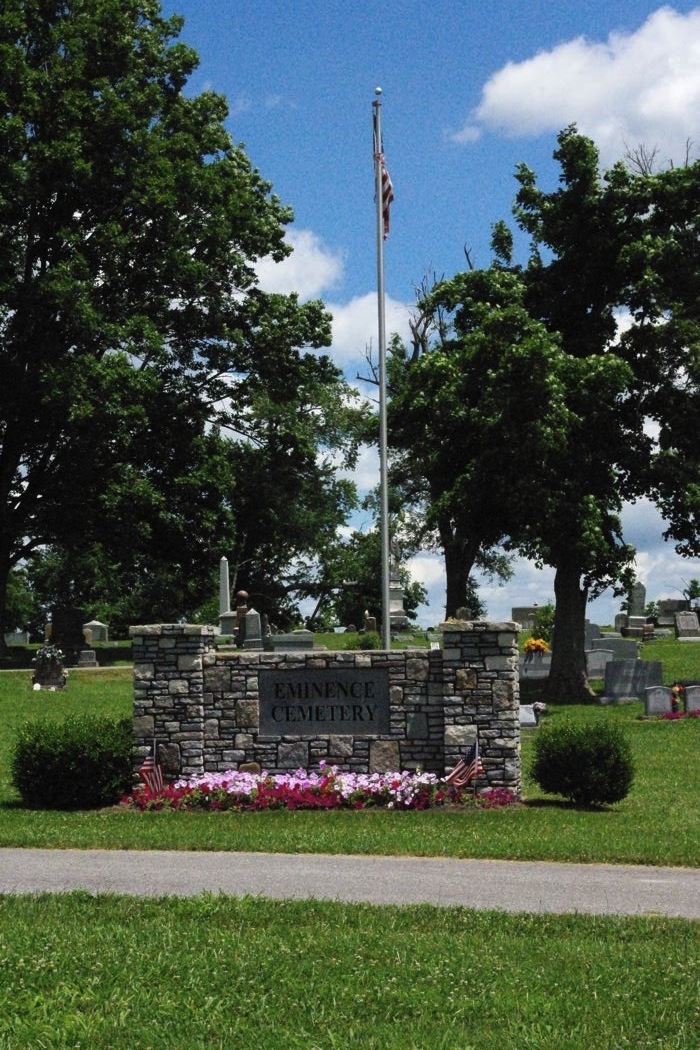 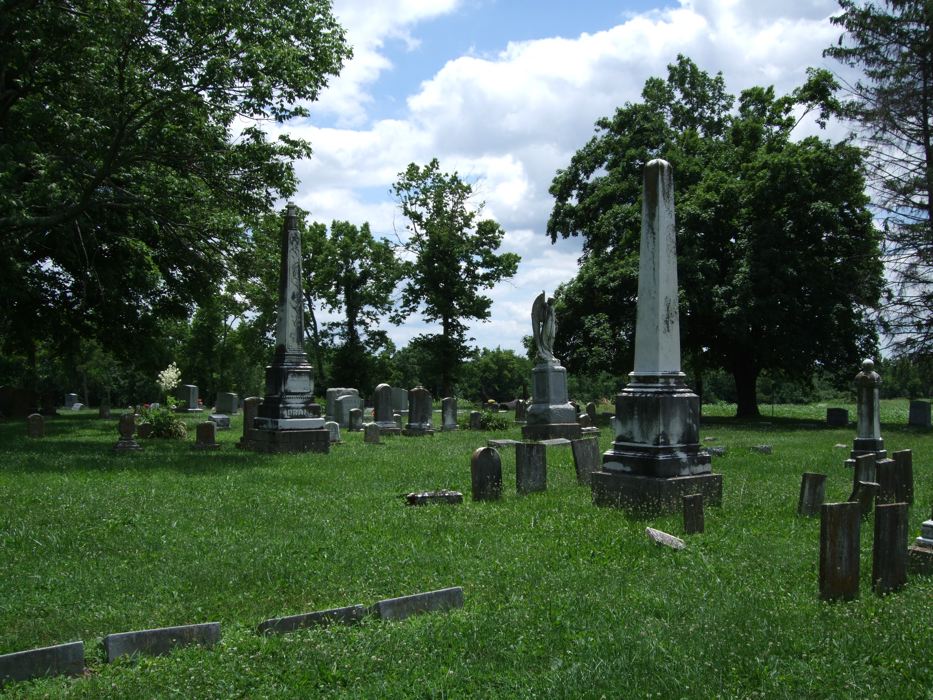 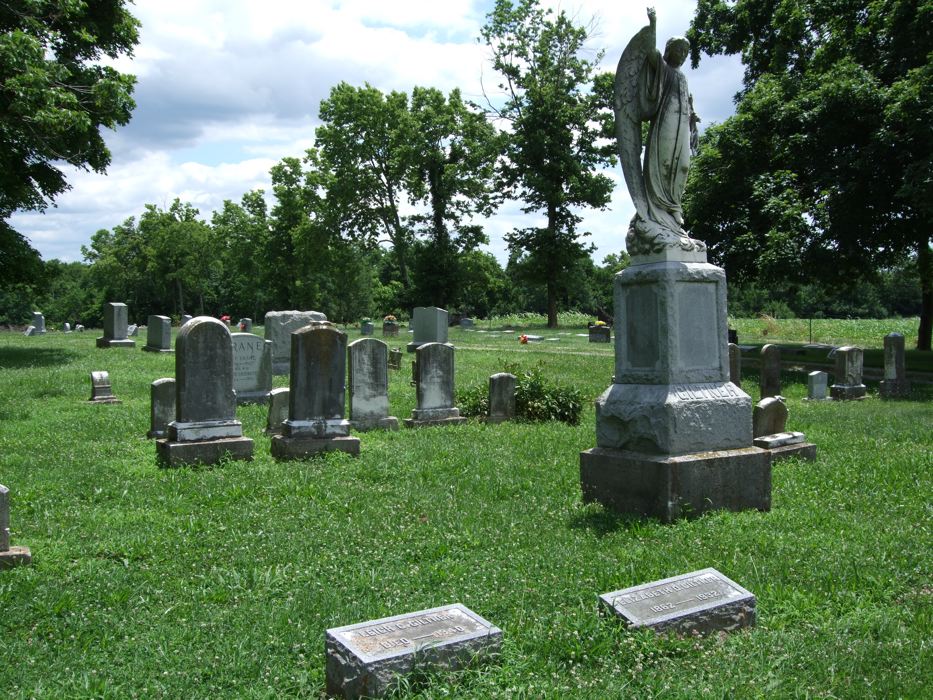 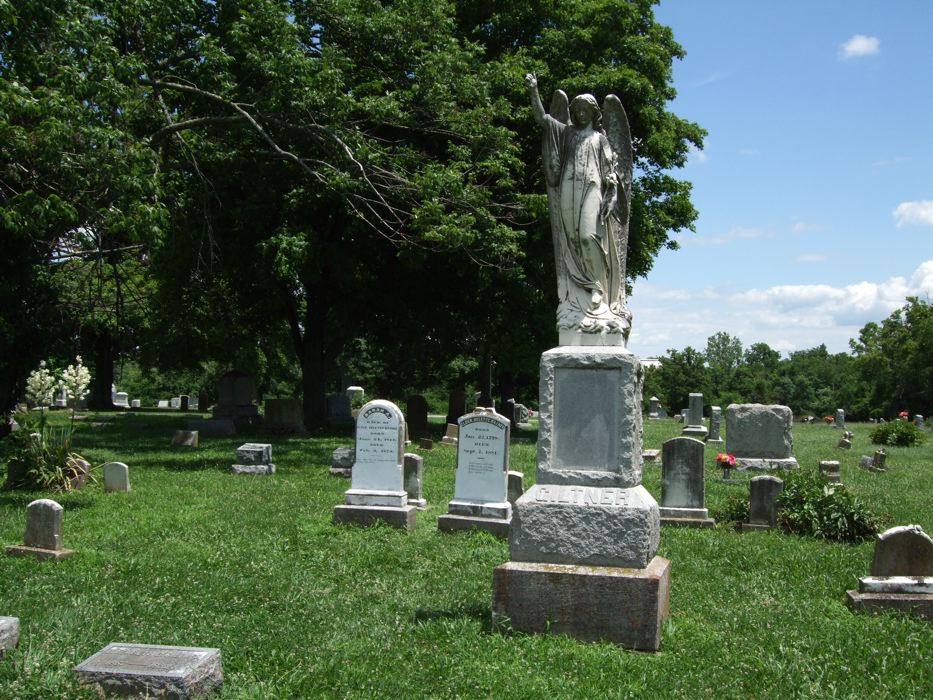 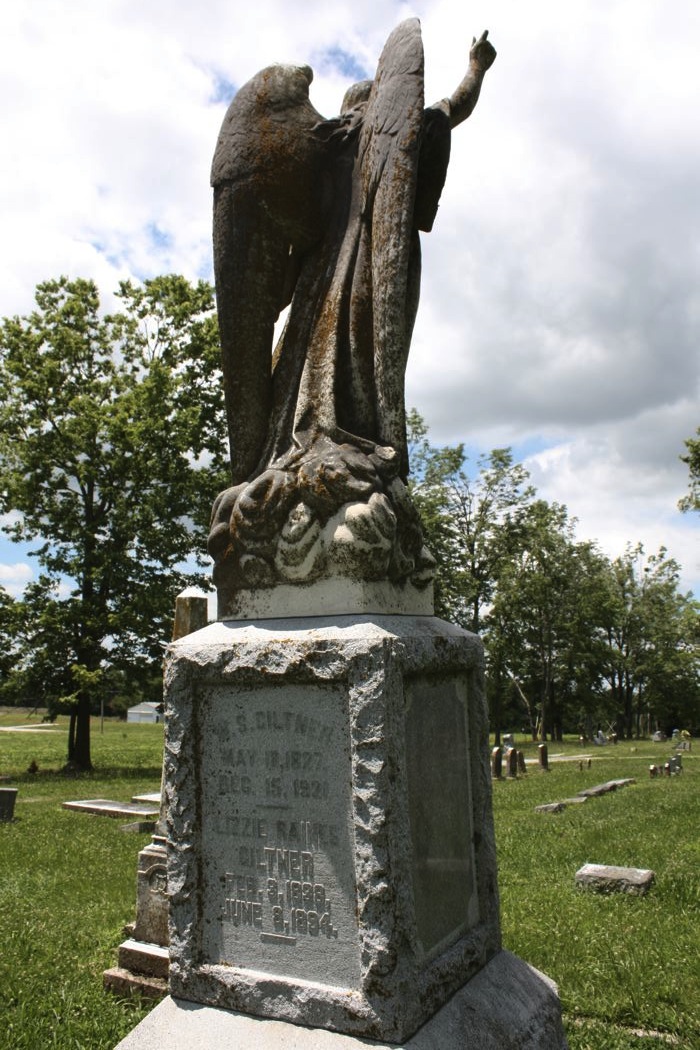 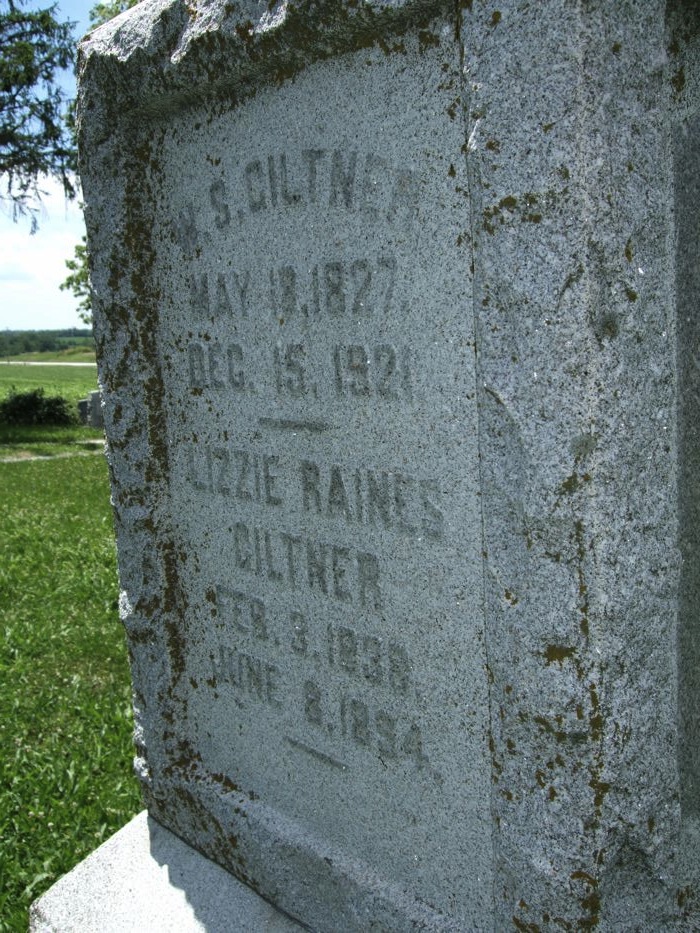 The first time your webeditor visited the grave of W.S. Giltner, I was with my family on a week's vacation in Kentucky in 2001. Having never been to Eminence, we spent a good bit of time in the Emminence Cemetery looking for the Raines plot. In June, 2009 Tom L. Childers, C. Wayne Kilpatrick and Scott Harp traveled about 3000 miles in one week through parts of Tennessee, Missouri, Illinois, Indiana and Kentucky. During this time we found the graves of 75 church leaders in the Restoration Movement. Chronicling these leaders into websites has been time consuming. Many thanks to Tom and Wayne in helping to take photos, share the driving, and putting up with your web master's slave-driving effort to see as many as we did in the time we had. Their photos as well as some of mine are seen on this site.

*William Seidner Giltner - Most all documentation lists W.S. Giltner as the full name of the person of this site. After some research on Ancestry.com it appears that William's mother's maiden name was Rosannah Seidner and his father's name was John Giltner. It is assumed that his middle name was taken from his mother's name.