Rice Haggard was born in Norfolk, Virginia. The year was 1769, and Virginia was but a colony under British rule. By the age of ten, the Haggards, as well as all their fellow Virginians were at war for independance. At eighteen, the war had been over for five years, and the heart of America was full of thanksgiving to God for their freedom. Influenced by the Methodist religion, he gave himself to God and became a member of that church. Within two years he was ordained a minister, and was given several churches to minister to in a circuit, as was the custom of that day.

John Wesley, the founder of Methodism in America, had appointed Thomas Coke to come to America and ordain ministers to carry out the work here. Coke ordained Francis Asbury as head of the church on December 25, 1792. At this meeting, another Methodist, James O'Kelley disagreed with the leadership of Asbury, and resigned from the church. He took a great group with him, initially calling themselves, Republican, or Free Methodists. Rice Haggard was in this group. At the meeting of O'Kelley's forces August 4, 1794, it was Rice Haggard who suggested the group take the simple biblical name, "Christian," to identify themselves.

When the Kentucky Revival of 1800 was underway, Haggard showed particular interest the success of camp meeting in the area. Whether or not he was at the Cane Ridge Revival in August, 1801 is not verified. But his knowledge of Barton W. Stone's efforts to unite on the Bible was what brought him to attend the meeting of the Springfield Presbytery in June, 1804. It was at his suggestion to the group of former Presbyterians at that meeting that the name they should take for themselves is "Christian." The suggestion was not only considered, but applied. To this day, the Christian movement of Barton W. Stone is readily recognized by historians of that era. The following year, Haggard wrote a book entitled, "An Address to the Different Religious Societies on the Sacred import of the Christian Name," and it was published in the Herald of Gospel Liberty.

Between 1806 and 1808 he married Nancy Grimes, a widow. The two moved to Cumberland County, Kentucky in about 1812 and settle on Haggard's Branch. Rice continued to preach among the Christians in that area. In 1815 he produced a hymnal, and distributed it among the Christian churches/churches of Christ.

In about 1817, he purchased some land on Kettle's Creek in Cumberland County, and built a cabin there. He moved his family to it and there he lived until his death. Incidentally, in 1973, that cabin was purchased by Randolph Smith, a pharmacist in Burkesville. The cabin was disassembled and re-assembled next to his Burkesville home. Though privately owned today, the owners next door, are willing to allow those of interest into the home to see it.

In 1819, while on business in Ohio, Rice suffered a fatal illness and died in Champaign, Ohio. He was buried in Xenia, Ohio. The grave location has been lost, however, the Rice Family graveyard was recently located near Burkesville. The unkept cemetery rests upon a high hill, just north of town on Hwy. 61. It is there that Nancy is buried, along with their son James O'Kelly Haggard, who was a judge in the town of Burkesville. Another son, David, is also buried in the cemetery.

Chronology Of The Life Of Rice Haggard

Joined the Methodist Church. His brother David admitted as preacher on trial.

Became a preacher in the Methodist Church on trial, serving under James O’Kelley

Haggard, with others, seceded from the Methodists and formed the “Republican Methodists” Over 1000 people left Methodist church.

Introduces the name "Christian" to the O'Kelly movement, travels a circuit with Christian movement.

Attends a meeting of the Stone movement and again suggests the name "Christian” (Christian Messenger, Vol 1. No.11, p.243)

Writes a tract on the importance of the name Christian entitled, “An Address to the Different Religious Societies on the Sacred Import of the Christian Name,” Published in the Herald of Gospel Liberty.

Marries between these dates to Nancy Grimes

At home in Norfolk County, Virginia. Visited by Joseph Thomas.

Published hymnbook of 440+ pages, one of earliest in West

Moves family to Kettle Creek. Builds a cabin, that exists today. Moved in 1970 to Burkesville and re-assembled. 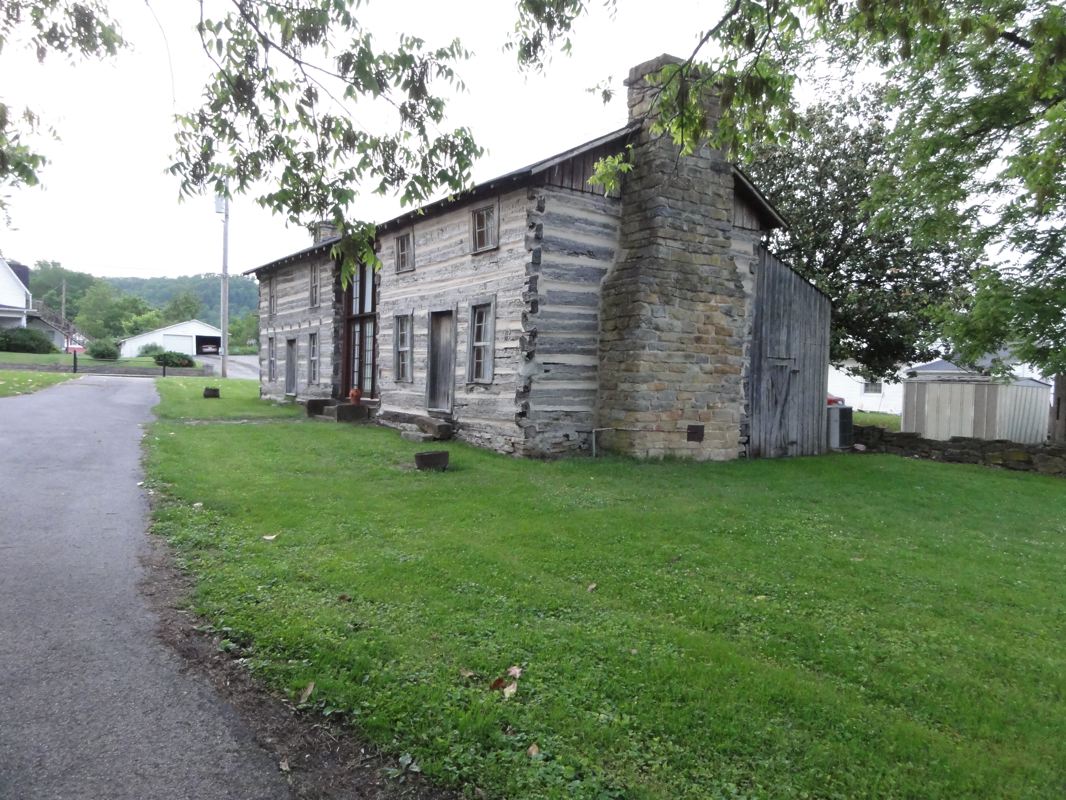 History comes alive when discussed with Burkesville pharmacist Randolph N. Smith. Smith is considered by some to be the foremost historian of Cumberland County and certainly he has played a big part in preserving much of the county history. Perhaps one of his most ambitious undertakings is the restoration of the Rice Haggard log home which Smith moved from its original location on Kettle Creek to a location next to his home in Burkesville.

Haggard, an early missionary, is given credit for adopting the name "Christian" in referring to the churches now known as Disciples of Christ and the Church of Christ. Haggard, after severing his connection with the Methodist Church, was one of the leaders in the 1890's movement that later became known as the Christian Church. He is thought to have moved to the Kettle Creek Log cabin in about 1817, and called the cabin his home until his death in 1819. Members of the Haggard family continued to live in the cabin for another forty years.

The fact that it was the home of Haggard for a short time makes it of particular interest to historians of the Christian Church. The home is listed as a tour stop for church historical groups. The cabin would be of historical significance even if it were not once the homes of Haggard, because of its early construction sometime between 1798 and 1806.

Smith became interested in the property and, after purchase, dismantled and numbered the logs and spent two years, from 1974 to 1975, overseeing the construction.

The cabin, a typical dog-trot log cabin build of hewn yellow poplar logs, was apparently built by members of the Davis family. According to the information provided by Smith, the cabin was dated by the date of the land grand as it was a requirement that the settler had to live on the land a year, clear two acres of land and make a crop of corn.

Smith said the cabin was originally built without windows. Windows cut into the front of the building at a very early date. When this was done, the upstairs floor was moved up one log in one room and this was nearly enough that the support for this floor was pegged to the logs instead of being nailed. Stairsteps were added at a later date as a ladder was used in pioneer times.

"Any structure that has been lived in for as old as this cabin has been altered several times." Smith said, "I modernized the home for our needs. A modern kitchen was added and also a bath, heating system, electricity and the dog-trot has been glassed in for heating purposes. I did try to do all this in keeping with the age and style of the home." It is an interesting building and Smith, with his detailed knowledge of local history and his love for preserving historical items is the perfect tour guide. 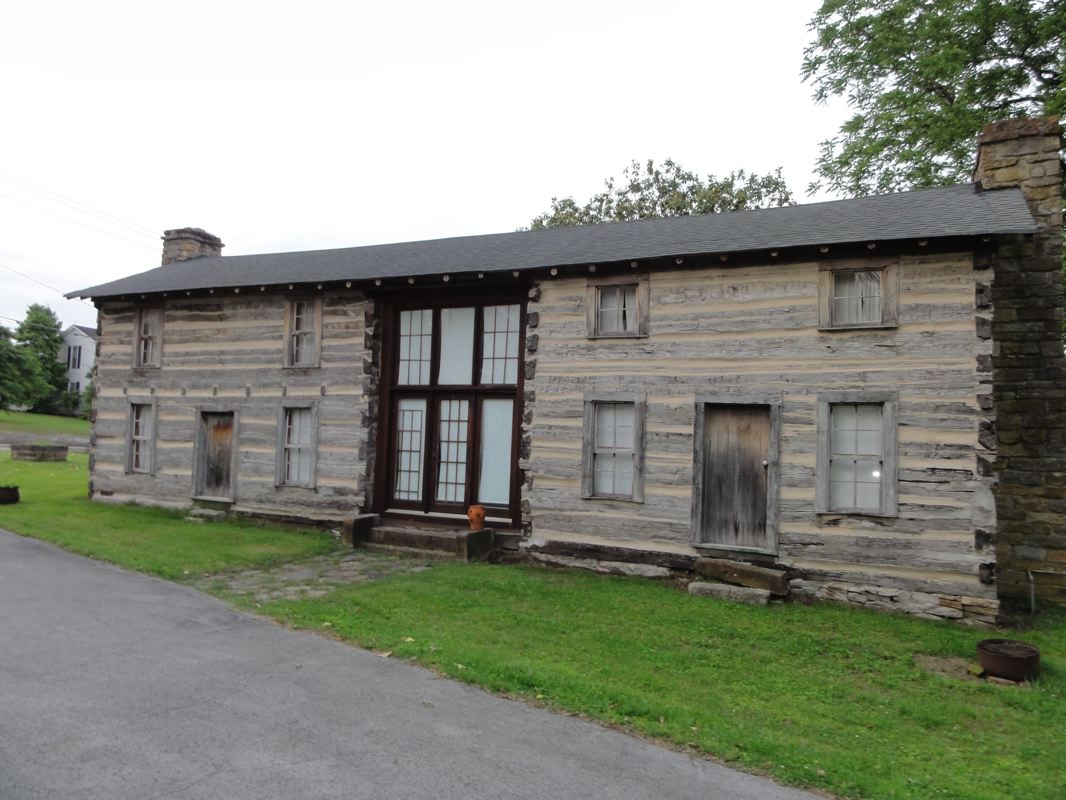 This historic house has been dated between 1798 and 1806. The house was lived in almost 175 years and has been altered some through the years. Around 1818, the Haggards bought the house. In 1973 this house was purchased, moved and restored by the late pharmacist Randolph Smith and his wife, Winton. (Doug Butler)

Rice Haggard was born around 1767-1770, and lived in Norfolk County, Virginia. He moved to Kentucky about 1812 and died about 1819, while on a trip. A fatal illness overtook him and burial is said to have been in Xenia, Ohio. He began the life of a traveling preacher in the Methodist connection. Because of his suggestion to discard all names except tat the followers of Christ call themselves, "Christians," and let the Bible be the rule ad guide for the church, he, along with others, opposed of errors and withdrew from the conference in 1792. (P.J. Kernodle's Lives of Christian Ministers)

Nancy Grimes Haggard, his wife, was born June 19, 1776, the only child of Captain William Grimes, one of the first captains who entered the army of 1776 under the command of George Washington. She died in Burkesville on April 20, 1862, leaving three children. Judge James O'Kelly, Captain David R. (colonel of the 5th Calvary Volunteers), and daughter Elizabeth. (The Millennial Harbinger, Vol. 6, Series 5., pgs. 95-96) Mrs. Haggard, James and David are buried in the King Cemetery currently at the top of the hill behind Dr. Robert and Peggy Flowers' house. 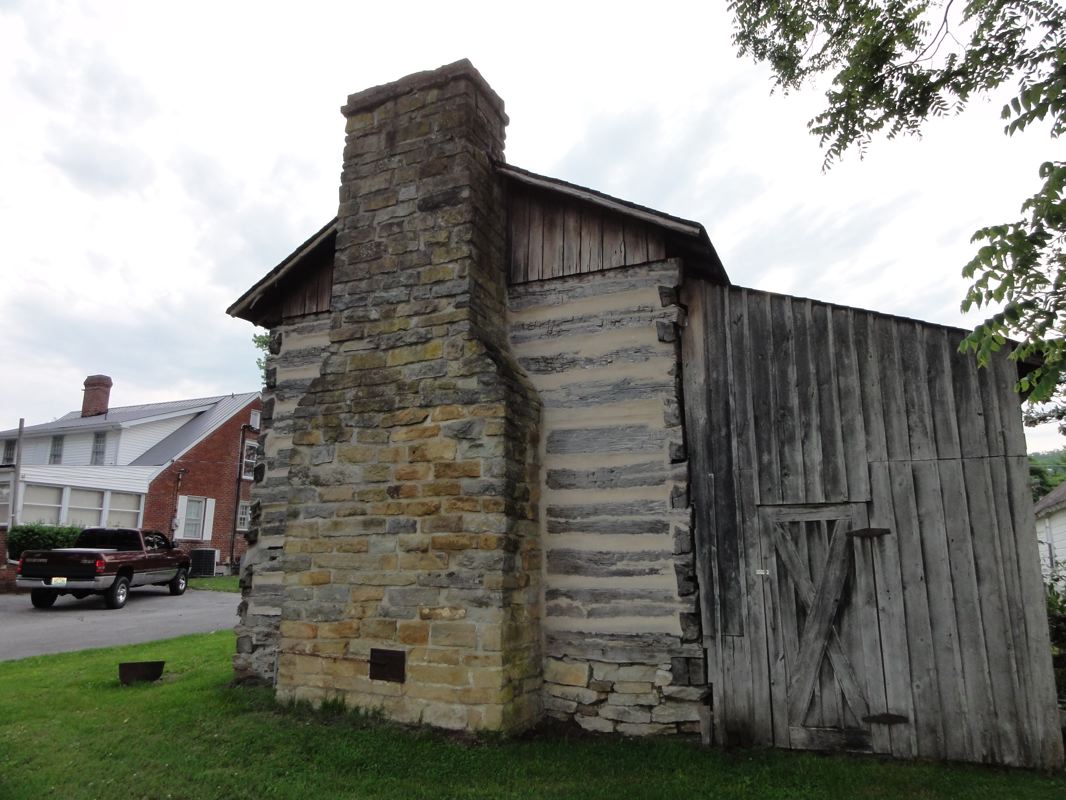 This cabin has been sitting in the side yard of Randolph and Winton Smith at 120 N. High Street in Burkesville since 1973 when it was reconstructed there by Radford & Radford Construction Company and Mr. Horace Norris. The log and mortar structure was once the home of Elder Rice Haggard, founder of the Christian Church in this country. Before the reconstruction, the cabin was located at Kettle Creek and was originally built between 1798 and 1806 by either Mose, David or Morris Davis. About 1810 to 1812, a second cabin was built to one side and a roof was added to cover both cabins, including the dog trot hallway between.

As a result of the civic-mindedness and generosity of Randolph Smith, Cumberland County Historian and Researcher, the cabin now sits visible to passersby and available for scheduled visitation. According to Mr. Smith, the Rice Haggard Cabin (which is furnished with antiques from many Cumberland County families, having been purchased by the Smiths) is often visited by members of the Christian and Church of Christ churches from various parts of the country.

Directions To The Graves Of Nancy, and Son, James O'Kelley Haggard

In Burkesville, Cumberland County, Kentucky, head north out of town on Hwy. 61 about 2 miles. Google maps suggests that the approximate address location is at 2143 Columbia Road. The cemetery is called by some KING Cemetery, Others call it the HAGGARD Cemetery. The cemetery is on private property owned by a Dr. Flowers, and permission to ascend to the top of the hill behind the home where the cemetery exists is important. Just remember that if you choose to ascend the steep bank, it is about a 200ft ascent, almost straight up. Also remember that Rice Haggard is not buried here, but in an unmarked grave in Xenia, Ohio. Had he lived, this location would have been where he would have been buried. Another man of note buried in the cemetery is General John Edwards. 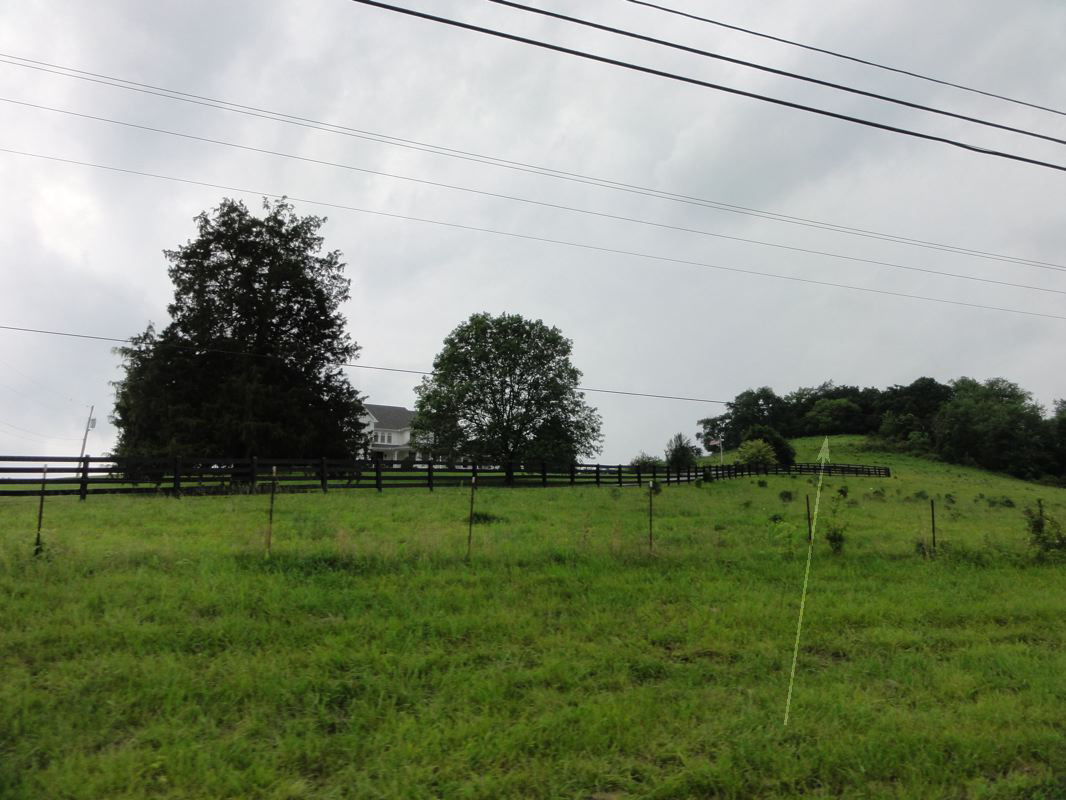 Dr. Powell Home and Cemetery in Far Distance Rear And Up The Hill 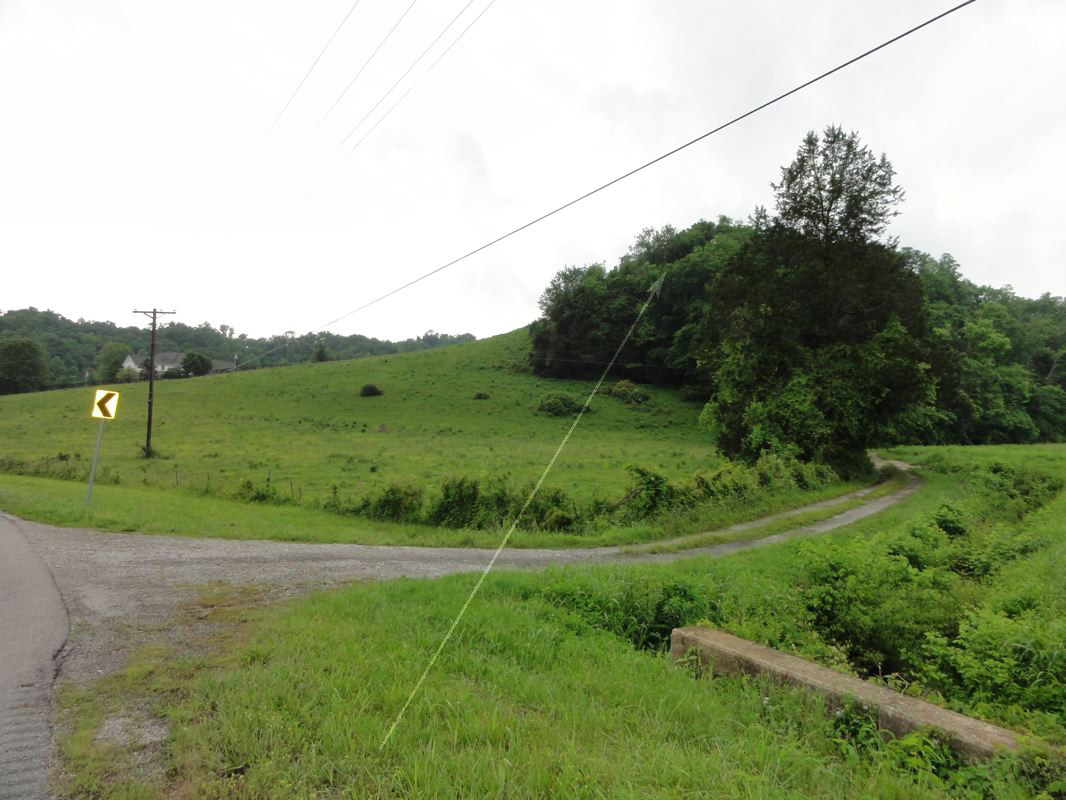 From Hwy 61, Past Dr. Howell Home, From Back Side Of Hill Where Cemetery Is Located 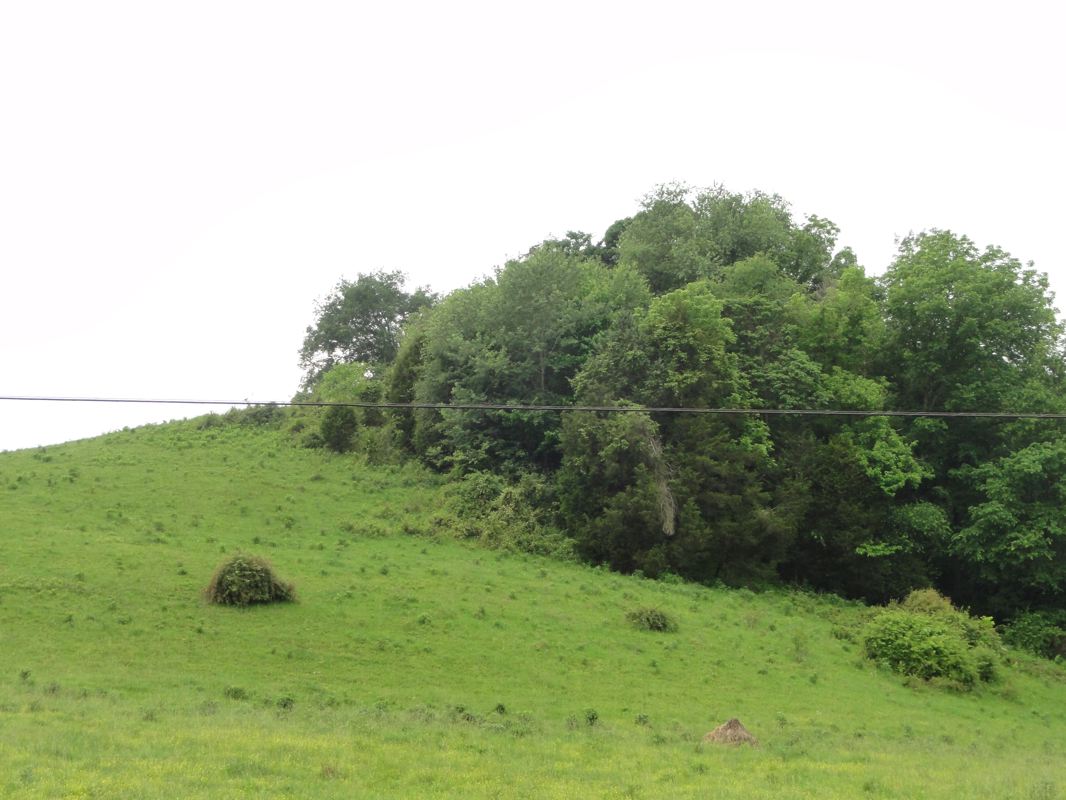 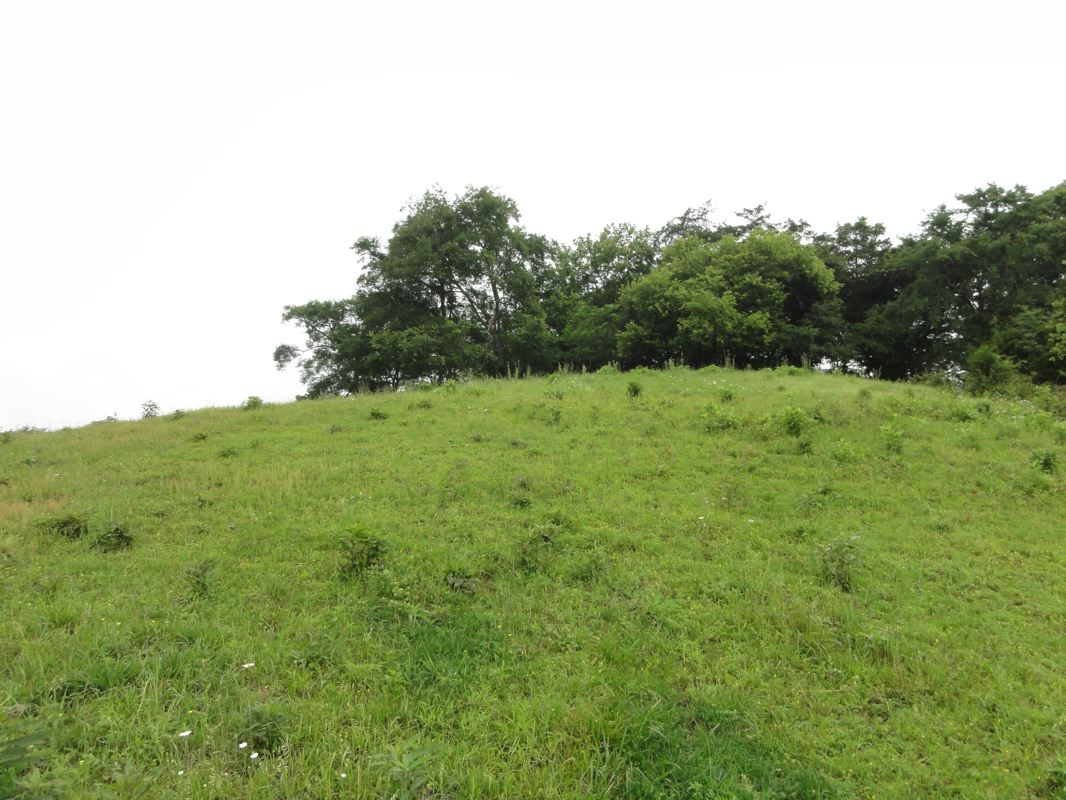 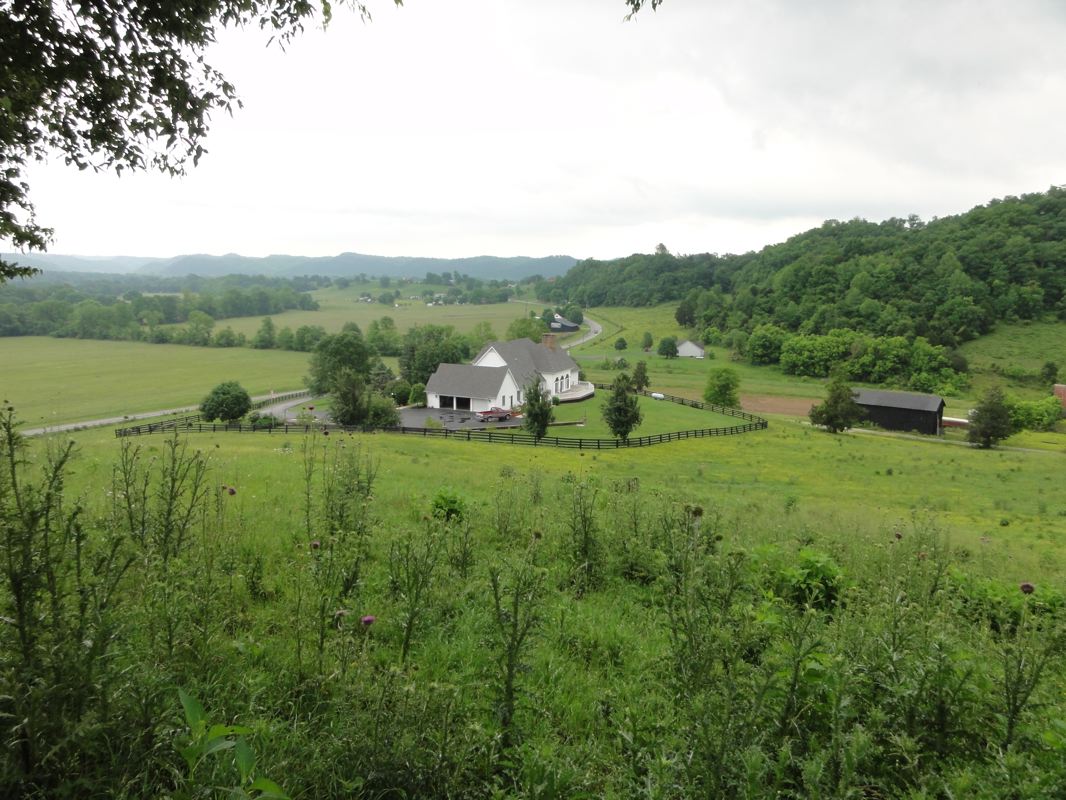 Looking Back From Cemetery Toward Dr. Powell Home, and Burkesville In Distance 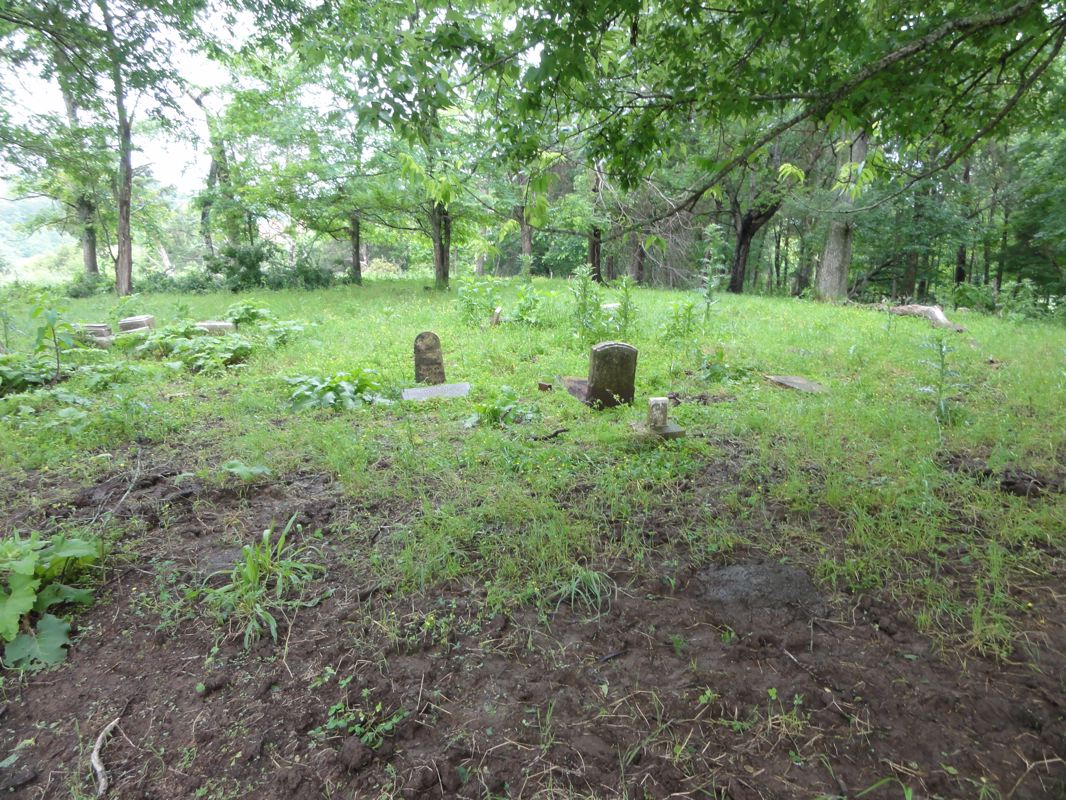 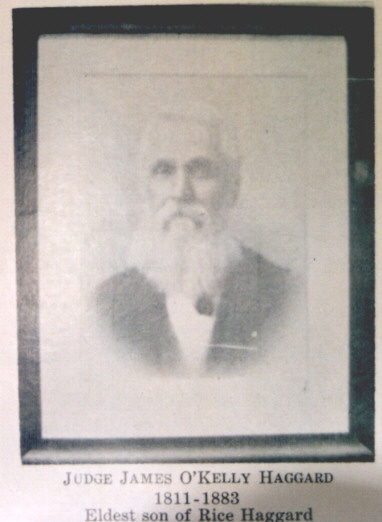 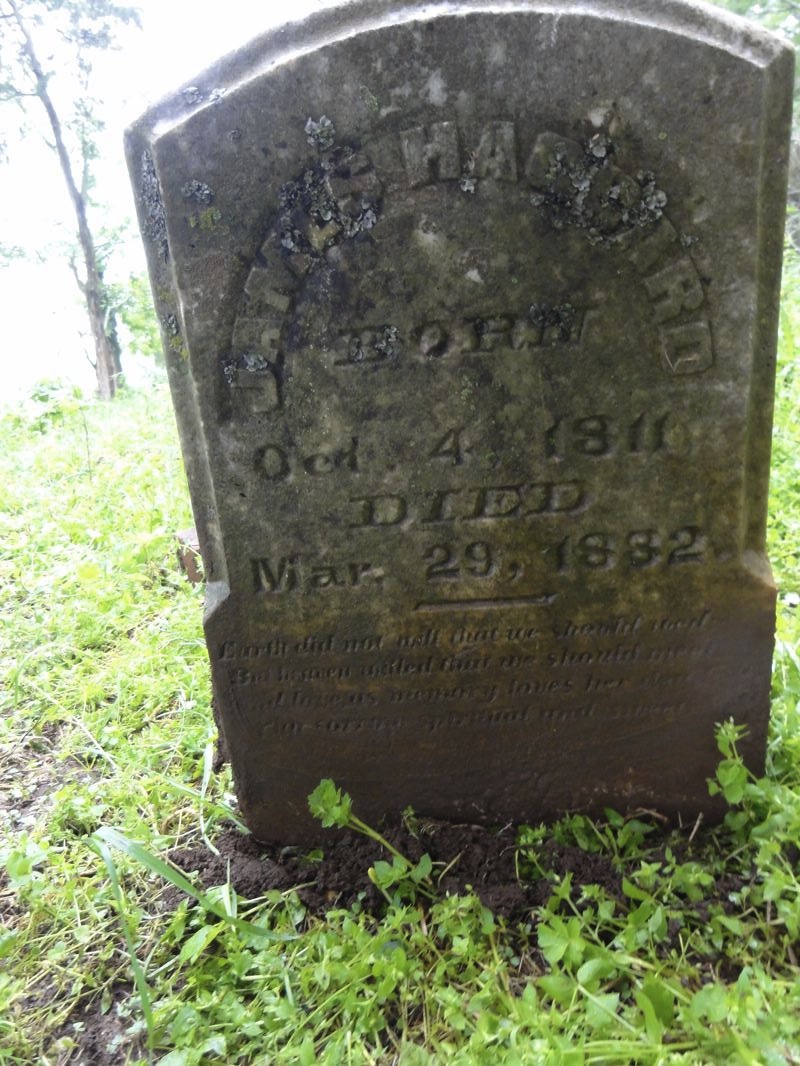 James Haggard
Born Oct. 4, 1811
Died
March 29, 1882
Earth did not will that we should wed;
But heaven willed that we should meet.
And love as memory loves her dead
run sorrow spiritual and sweet 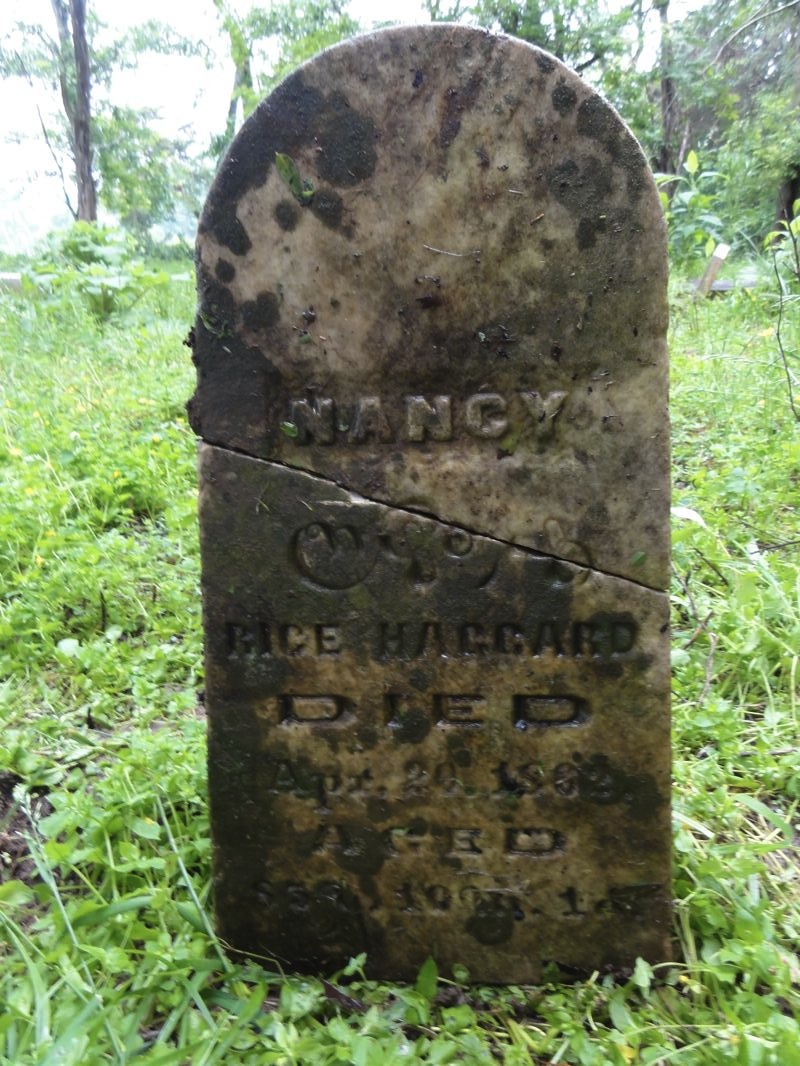 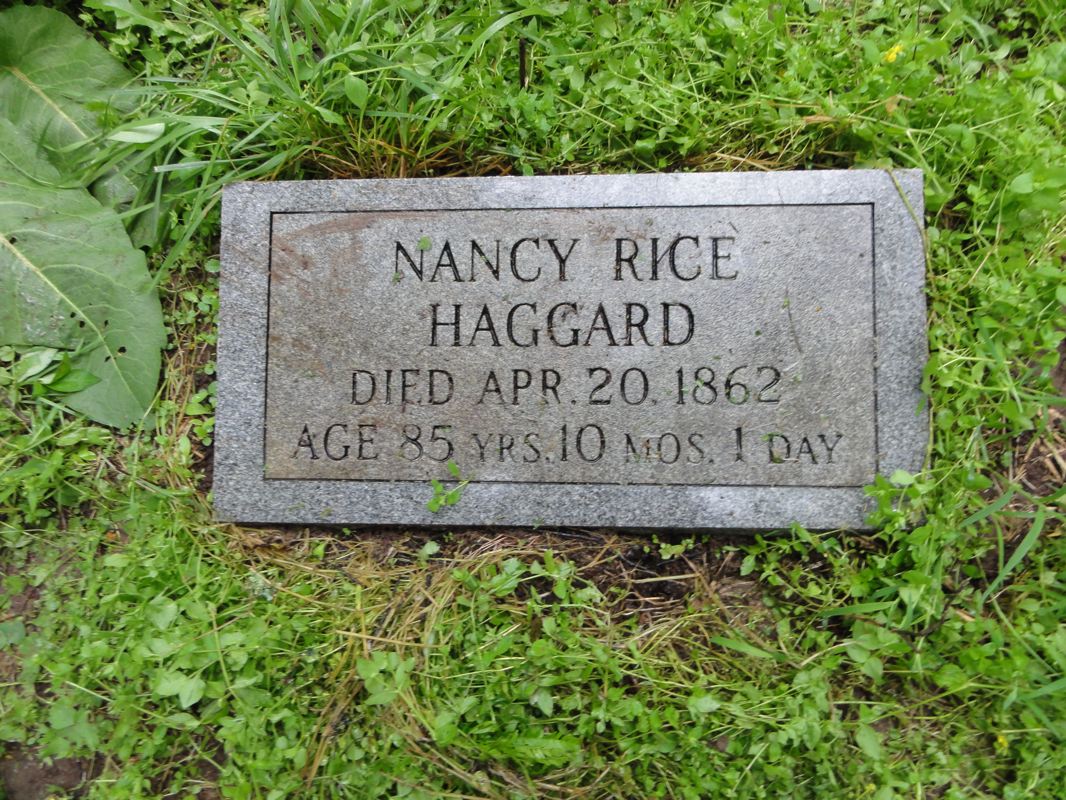 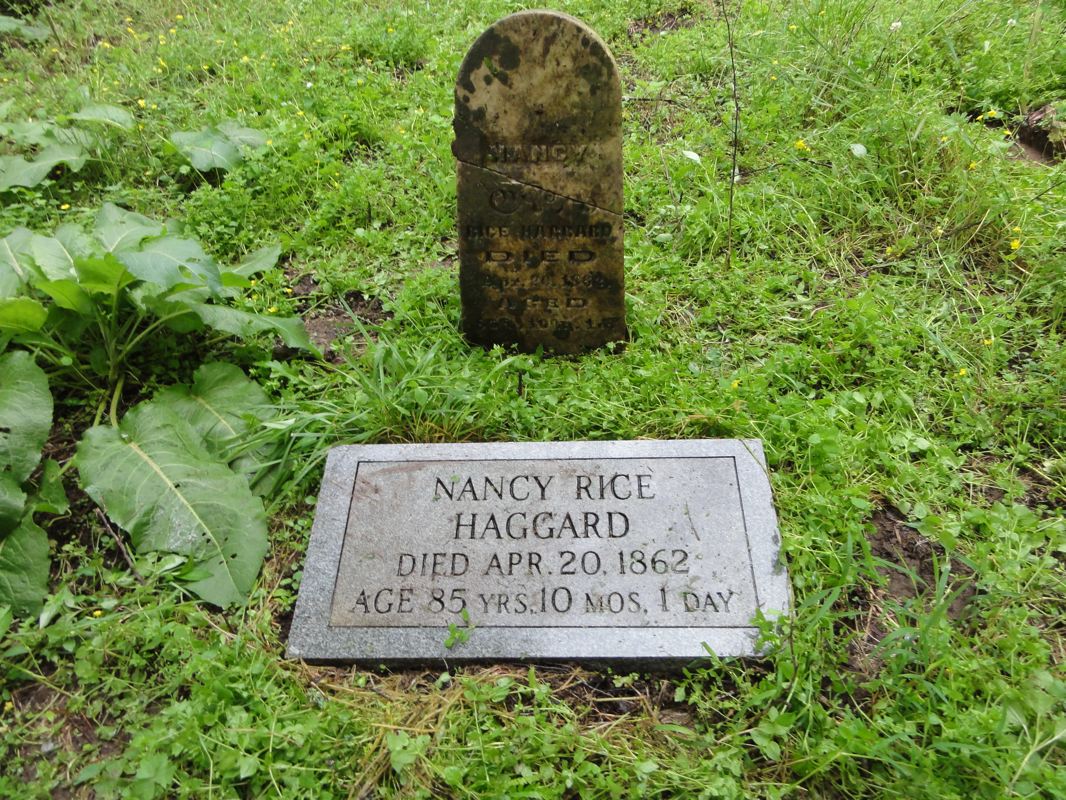 *Note: This marker is mistaken. Her name was Nancy Grimes Haggard, wife of Rice Haggard

Special Thanks to C. Wayne Kilpatrick & Tom L. Childers for assisting in the finding of Nancy Haggard's grave. It was located during a May, 2011 trip taken with your web master to central Kentucky. Climbing through fence rows and a mountain nearly straight up, was breathtaking and challenging. But we made it! Photos we took appear above.