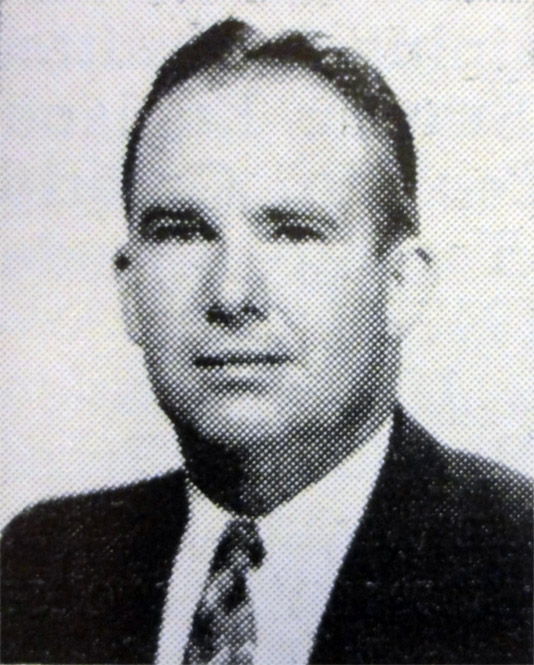 Through the years he worked with different congregations: the Sheridan, Arkansas church from 1942-1946; the Isabel, Kansas church in 1947; the Locust Grove, Kentucky church 1948 to 1952; the Grace Avenue church in Nashville, Tennessee from 1952 to 1956, and the West End congregation in Nashville from 1956. For years the church there aired their worship serivces on the radio station WFMB.

He wrote for papers like 20th Century Christian, Power For Today, The Christian Worker, The Way Of Truth, Bible Herald, Nashville Tennessean, Gospel Advocate and the Firm Foundation. He wrote the tracts, "How Shall the Young Secure Their Hearts," "The House Under Construction," and "What Does The Bible Teach About Placing Membership?" "Johnny Pepper," "Introducing the Church of Christ," "From the Foundation to the Full Building," "What's This Thing All About?" "And Amen." He also served as editor for Christian Family Book Club.

Brother McInteer preached a number of gospel meetings each year. He had meetings in Kansas, Kentucky, Tennessee, Alabama, Colorado, and Arkansas.

For a many years Jim Bill McInteer's name was connected to Twentieth Century Christian where he served on its editorial staff. He also served on the Boards of Directors for the following: Harding University in Searcy, Arkansas; Hong Kong Christian College; Foundation for Christian Education; and Potter Orphan Home in Bowling Green, Kentucky. He also served on the Board of Directors for Gospel Press in Dallas, Texas. For a time he also served on Advisory Boards of: Pepperdine University in Los Angeles, California; Royal Publishers, Inc., Johnson City, Tennessee; and the Foundation of Great Lakes Christian College in Beamsville, Ontario, Canada. He was the Chairman of the Board of Censors, Nashville, Tennessee. He served on the Governors Committee of the State of Tennessee of Employment of the Physical Handicapped. He served as President of the Nashville chapter of Lipscomb Alumni Association. In 1964 he was recognized by Harding College with the "Distinguished Alumnus Award." He was a member of the West End chapter of the Civitan Club, and was a member of the Sons of the Revolution, a Kentucky colonel. He also owned a farm in southern Kentucky.

Jim Bill McInteer was a promoter of great works, a servant among men, an educator of people in the ways of Christ, and promotor of all things good. Arguably, the way in which he should be remembered as husband, father, and caregiver. He lost the love of his life, Betty October 17, 2003. In the years leading up to her departure, she suffered with alzheimers. During that extreme period in his life, he kept up his preaching appointments, and brought Betty with him as long as was possible. He was always at her side, providing assistence until the end. In this Jim Bill became such a great inspiration to caregivers everywhere who know of their situation. He lived with his promises to love her in sickness and in health until death separated them.

The last years of his life were with his family, continuing to preach when able. Jim Bill McInteer passed from this life March 8, 2010, just a few weeks before his 89th birthday. He was buried in his home of Franklin, Kentucky in the Greenlawn Cemetery.

l often think of Jim Bill McInteer, already aged, returning from his Kentucky farm, having planted apple trees from which he would never gather a crop. Jim Bill loved Kentucky and especially his ancestral farmland. Receiving it in trust, he enhanced it and passed it on. This attitude of investment characterized Jim Bill's life in many ways.

Jim Bill lived in demand to support efforts throughout the brotherhood. Three institutions, in particular, held a special place in his heart and received the best of his labor. For decades Jim Bill's name was inseparably linked with Harding University. As a graduate, as a parent and as a board member, he supported the school in every way. He was also a member of the board of Potter Children's Home in Bowling Green, Ky., and of the Charlotte Fanning Foundation, the legacy of Charlotte Fanning that provides a Christian education to young women.

With each of these good works, Jim Bill invested himself in the training and betterment of young people. He sought to build the kingdom by instilling the gospel into the lives of the youth. Through these efforts, Jim Bill touched the lives of thousands who serve the church in every place. 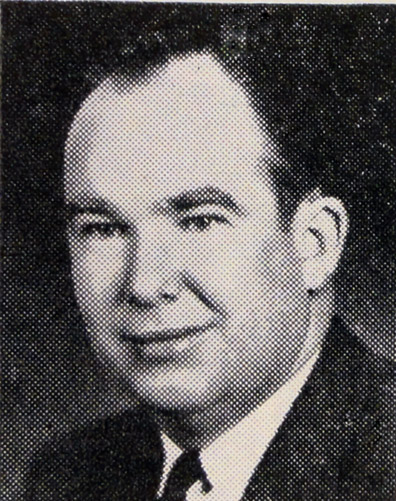 To the brotherhood, Jim Bill McInteer was an iconic name; to those of us who knew him at the West End congregation in Nashville, Jim Bill was our preacher. For 30 years, the church at West End received guidance from his teaching and preaching. Jim Bill baptized us into Christ, officiated at our weddings, and offered consolation in the hour of death.

In church work as well, Jim Bill invested himself in the training of youth. Each year, Jim Bill and his wife, Betty, organized and conducted a week of camp at Fall Creek Falls State Park. Camp WEBE provided young people with a mountaintop experience, especially memorable for the time spent with Jim Bill and Betty. This commitment to training was also at the core of the apprentice minister program that Jim Bill conducted to help young men receive training in church work.

My first association with the West End congregation was through Camp WEBE. In due course, I was blessed to be Jim Bill's apprentice. His voice will always echo in my mind as his example guides my work.

Underneath the Kentucky soil he loved so much, Jim Bill's body has been laid to rest next to his devoted wife. We who are left gather strength in knowing Jim Bill and Betty are together with their Lord. Their legacy of faith continues to bless each who knew them.

His home congregation was West End Church of Christ in Nashville, Tenn. At the time of his death, he was serving Neely's Bend and Heritage churches of Christ.

He was preceded in death by his wife, Betty May Bergner Mclnteer. He is survived by his daughter, MariLynn McInteer Canterbury; and son, Mark McInteer; five grandchildren; and three great-grandchildren.

Directions To The Grave of Jim Bill McInteer

Jim Bill McInteer is buried in the Greenlawn Cemetery in Franklin, Kentucky. In southern Kentucky take I-65 to Exit 6/Hwy.100 and head into Franklin. Turn right on Scotland Ave.The road will dead end into Cemetery Street. Turn left on Cemetery Street. Enter the entrance of the cemetery on your right, just in front of the office. Go down the drive about 150 feet and look to your left for a tree in the middle of the section. Just to the left of it is the McInteer plot. 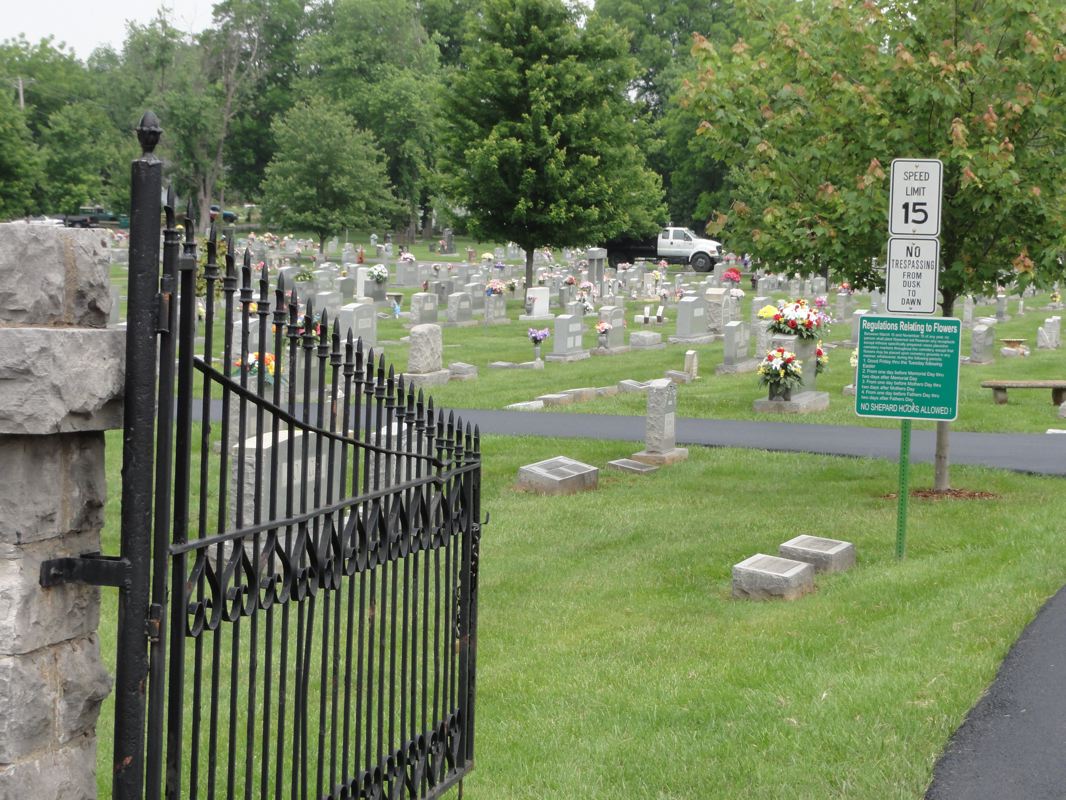 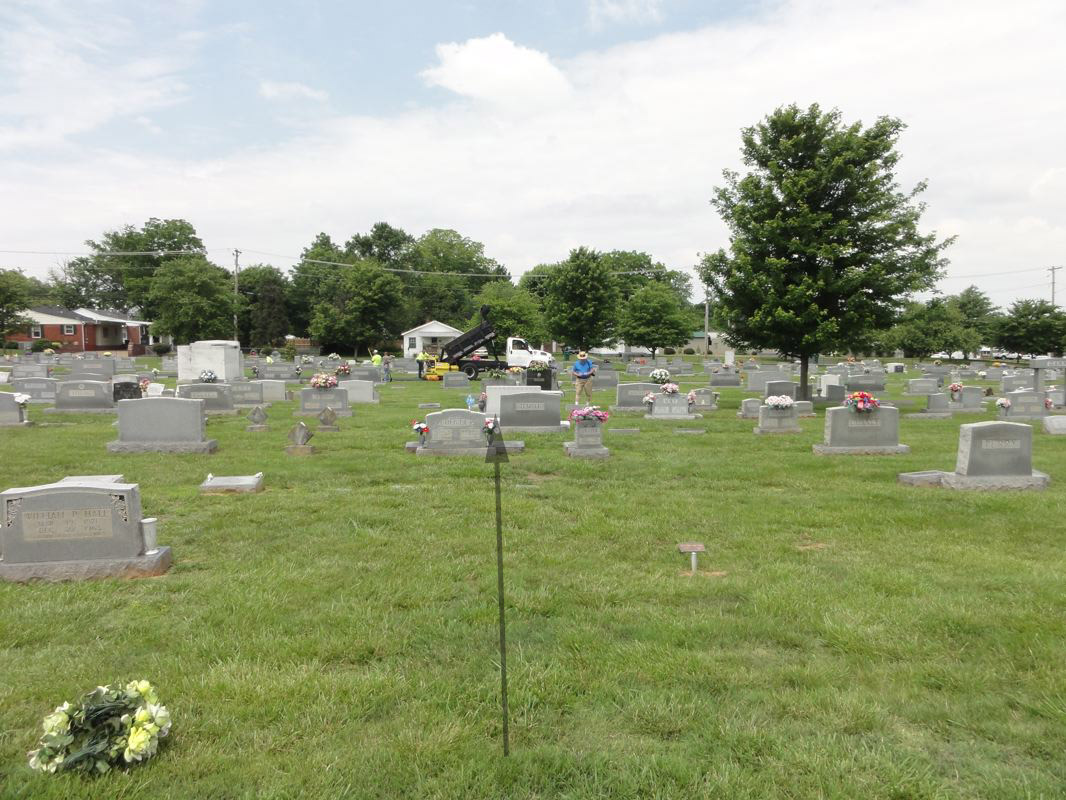 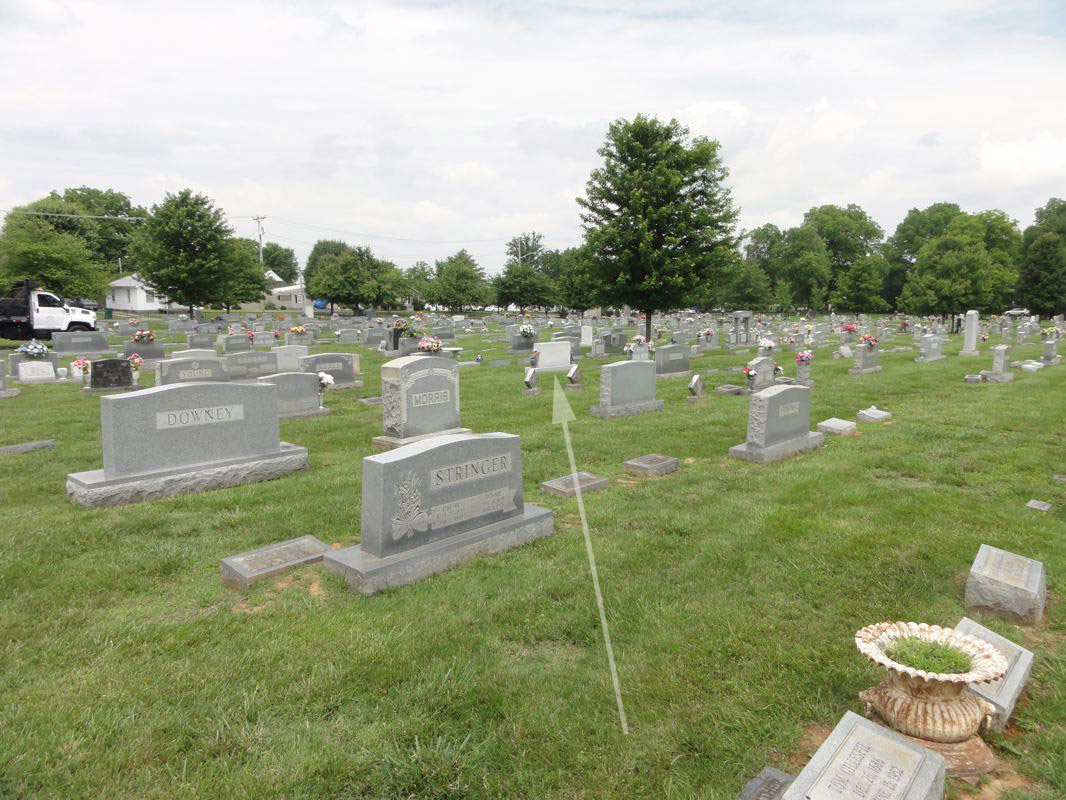 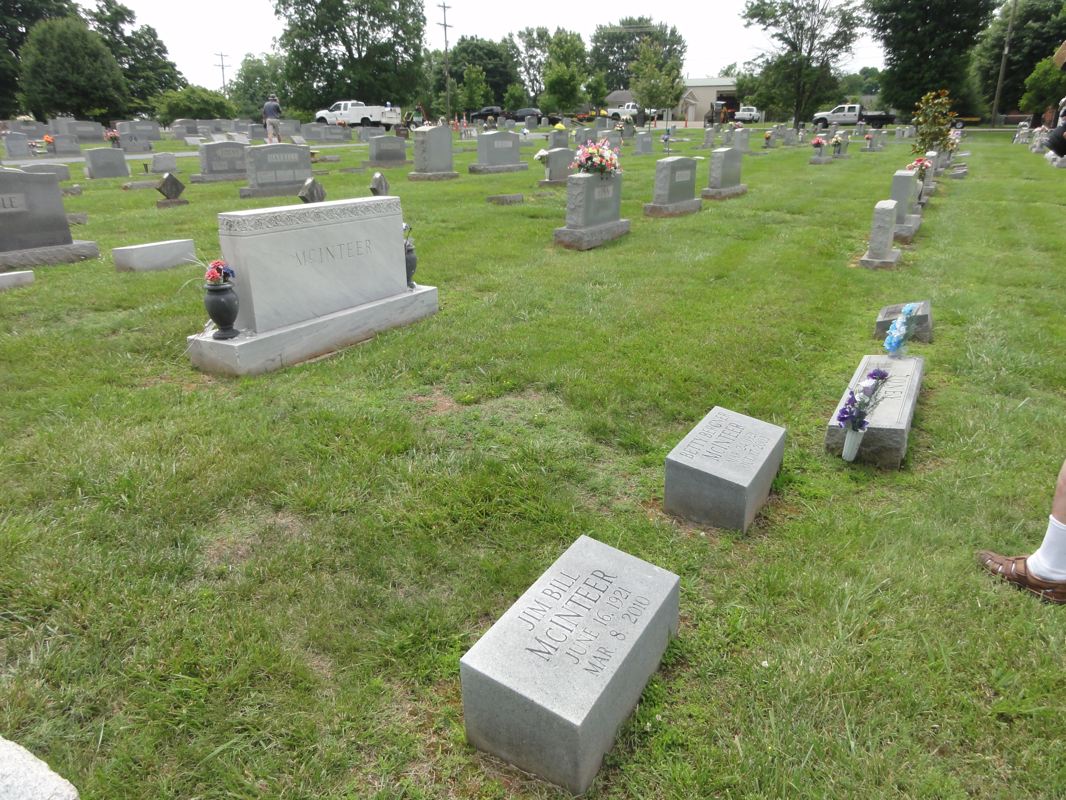 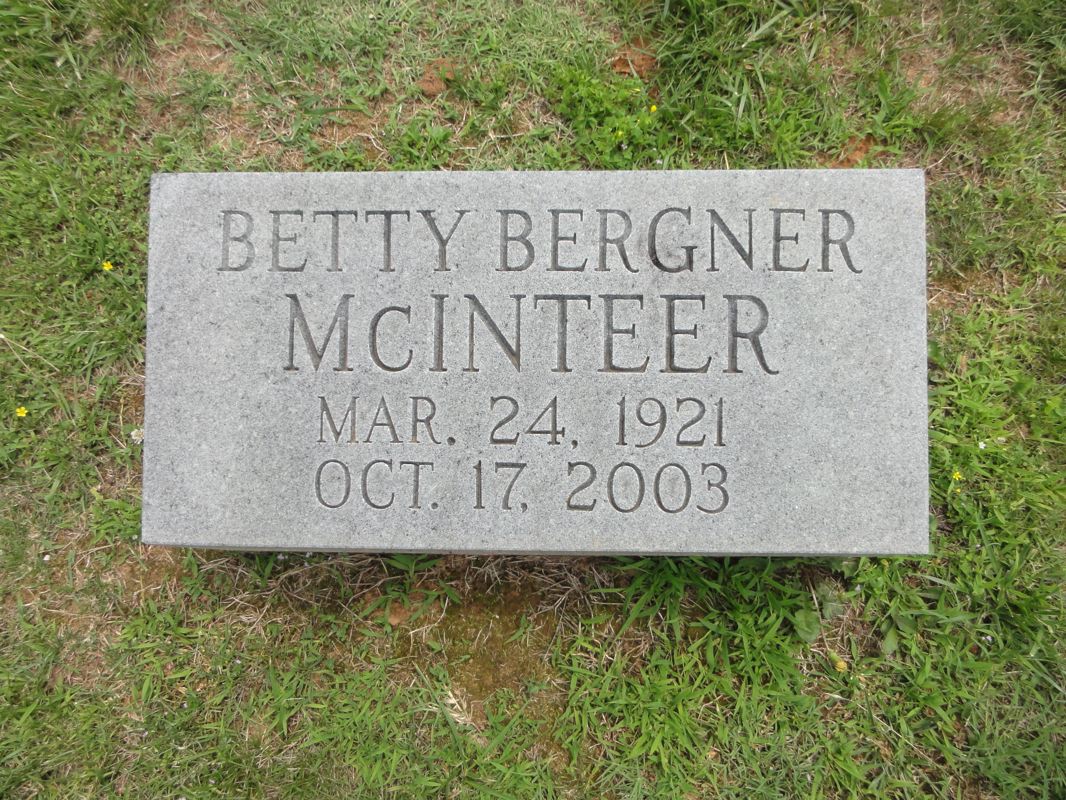 Web Editor's Note: The day I visited the grave of Jim Bill McInteer, I had just begun a week's Restoration Research trip with my dear friend Tom L. Childers. Brother McInteer's grave was early on our list of preacher's graves to be found. The superintendent of the cemetery pulled up the list on his ipad and directed us right to the grave.