SILAS MERCER NOEL was the son of Theodrick Noel, a distinguished Baptist preacher in the Old Dominion, in the early days of Baptist operations in that State, and was born in Henrico county, Va., August 13, 1783. His father gave him a good English education, after which he educated himself in the classical languages, and then studied law. He emigrated to Kentucky and established himself in the practice of his profession, at Frankfort. He professed conversion, probably as early as 1810, and was baptized by William Hickman, pastor of Forks of Elkhorn church. Soon after his union with the church, he was licensed "to exercise a preaching gift," and, about 1813, was ordained to the pastoral care of Big Spring church, in Woodford county, which was constituted that year. He continued pastor of this church one year.

Mr. Noel was a man of fine culture, of broad views, of active enterprise, and enlarged public spirit. As soon as he entered the work of the ministry, his active mind began to inquire into the wants of the Baptists of the State. In 1813, he commenced the publication of a religious monthly magazine, called the Gospel Herald. 1(1This was not, as Dr. Ford supposes, the first religious periodical published in Kentucky. I have before me a complete volume of the Kentucky Missionary, and Theological Magazine, a quarterly edited by Stark Dupuy, and published at Frankfort, Ky. The first number was issued, May, 1812.) In the first number of this periodical, he advocated the establishment of a "General Committee, " among the Baptists of Kentucky, in which the whole Baptist denomination in the State, might be represented. and thereby secure unity and harmony of action in promoting schemes of benevolence, especially home and foreign missions. Without entering into particulars here, it is sufficient to say, in this place, that the proposed "General Committee" was intended to answer similar ends to those now promoted by the General Association of Kentucky Baptists. The measure would have been a wise one, if the Baptists of Kentucky, had been prepared to adopt it and carry out its purposes; but they were not, and the movement had to be postponed about nineteen years. Mr. Noel, however, lived to see his measure carried into successful operation in the General Association.

In 1812, Mr. Noel and Jeremiah Vardeman proposed to publish "a comprehensive History of the Baptist Society." 2(2 Min. of South Dis. Asso. of 1812. ) How far this work progressed is not known.

About 1816, Mr. Noel was appointed by Gov. Slaughter, Judge of the Circuit Court. In filling this office, he abandoned the work of the ministry, for a time. John Taylor speaks of him at this period as follows: "Mr. Noel sometime after this relinquished the pastoral charge at Big Spring, though he preached for them sometime after this. He at length took a letter of dismission, and joined the church at Frankfort, after which being appointed circuit judge, for a season he desisted from preaching, and resumed the practice of law to which he had been bred. He forebore the sacred office of gospel minister, about two years, being very unhappy in this lapsed state. About one year past, he came forward again as a preacher, with more zeal, consistency and apparent stability than at any time of his life, before, and is now one of our first-rate Baptist preachers in Kentucky, and has lately taken the pastoral care of the Baptist church in Frankfort." 3(3 His. Ten. Ch's p. 186. )Speaking of him at a later period the same author says: "Silas M. Noel . . is now a great traveler and one of the most successful preachers the Baptists have in Kentucky For three years past I suppose he has baptized more people than any other man in Kentucky. His labors seem blessed in whatever direction he takes. The conversion of sinners to the Lord seems to be the greatest object of his address to men. Repentance and faith, or faith and repentance, connected with a godly life, is the main drift of his discourses, with profuse invitations to everyone to come to the Supper. Speculative trifles are barely found in his exhibitions.

"The high powers of Lexington, authorized to make doctors of Divinity, a year or two back saluted him with a flowing diploma. But it is pleasing to see that these high flying trifles do, not prevent his going into thickets; or, according to his own term, while at his work, the highways and hedges, to invite the poor, the halt, the blind and lame, with every other soul to seek the salvation of God."4(4 His. Ten. Ch's, pp. 187, 188)

In 1827, Mr. Noel accepted a call to Stamping Ground, where he labored but a short time. The next year he took charge of Great Crossing church. Here his success was remarkable. Within one year he baptized into its fellowship 359 persons. Among them were seventeen Indians from Choctaw Academy at Blue Springs. At least one of these Indians, Sampson Birch, was afterward ordained to the ministry.

During the two or three years that followed this large in-gathering at Great Crossing, the Campbellite excitement was at fever heat. The discussion partook largely of the popular feeling, but also brought into the arena of newspaper warfare, the ablest men on both sides of the question. Among them Silas M. Noel stood in the front rank on the Baptist side, and while he was not the equal of William Vaughan in the pulpit, he was decidedly his superior with the pen, and, with this he entered largely into the discussions, through the press, while Vaughan was in the lead on the rostrum. Out of a membership of 558, Great Crossing lost only sixteen by the Campbellite schism.

Mr. Noel probably served some other country churches, at different periods. In 1836, he accepted a call to the church in Lexington. Here he served acceptably about three years, when he was called up higher, May 5, 1839.

In his early life, Mr. Noel was somewhat perplexed on the subject of church government, and probably inclined to the Presbyterian, but after a few years, became fully settled in that of the Baptists. He, however, felt the need of some general organization, through which the denomination, at least, over the extent of the State, could act in harmony. Hence his proposal for a general committee, in 1813. He established, in that year, the Gospel Herald, a denominational monthly Magazine, by means of which the Baptists of the State could have inter-communion of sentiments. But this was soon discontinued for want of patronage. He was very active in originating Georgetown College, especially for the educating of young preachers. He was a member and President of its Board of Trustees, was instrumental in securing the Paulding fund, and subscribed $500 to the college endowment. He was a leading spirit in organizing the Kentucky Baptist State Convention, in 1832, of which he was Moderator during its existence. The Baptists of Kentucky owe much, under God, to this good and great man.

He was known as one of the "ablest" Baptist preachers in Kentucky, Silas M. Noel, D.D.. Noel preached for the Baptist Church in Frankfort, Kentucky. In the early years of the Reform Movement led by Alexander Campbell, Noel supported the movement. When division came to a head with the regular Baptists, he chose to stay among the Baptist, and devoted the remainder of his life to fighting the influences of the Campbell & Stone Movements. P.S. Fall, was a bitter enemy of Noel's, as Fall had led an entire Baptist church to give up their theology to become a first century church in 1824. Noel wrote articles against the Churches or Christ, and debated their preachers in his writings. He, along with Jeremiah Vardeman, planned the Baptist, Georgetown College, in hopes of producing Baptist preachers who would combat Campbellism. He was the man who baptized Emily H. Tubman, but Tubman never worshipped as a Baptist, always with the Reformed Movement or Disciples Of Christ. Noel is buried under a flat stone that has weathered and worn through the years. He is in the section just southwest of the large War Memorial in the center of the Frankfort Cemetery. While visiting the cemetery, this marker is one you will not want to miss. Noel is buried in Section M. See Map Here! 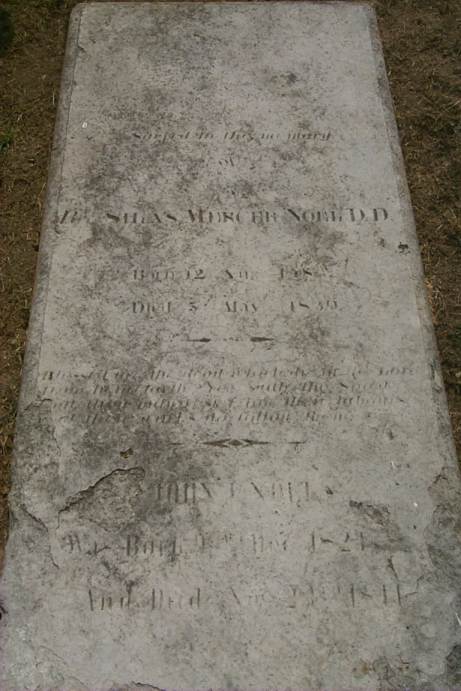 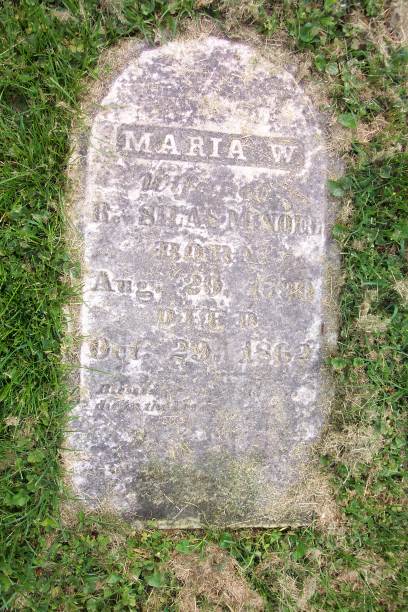 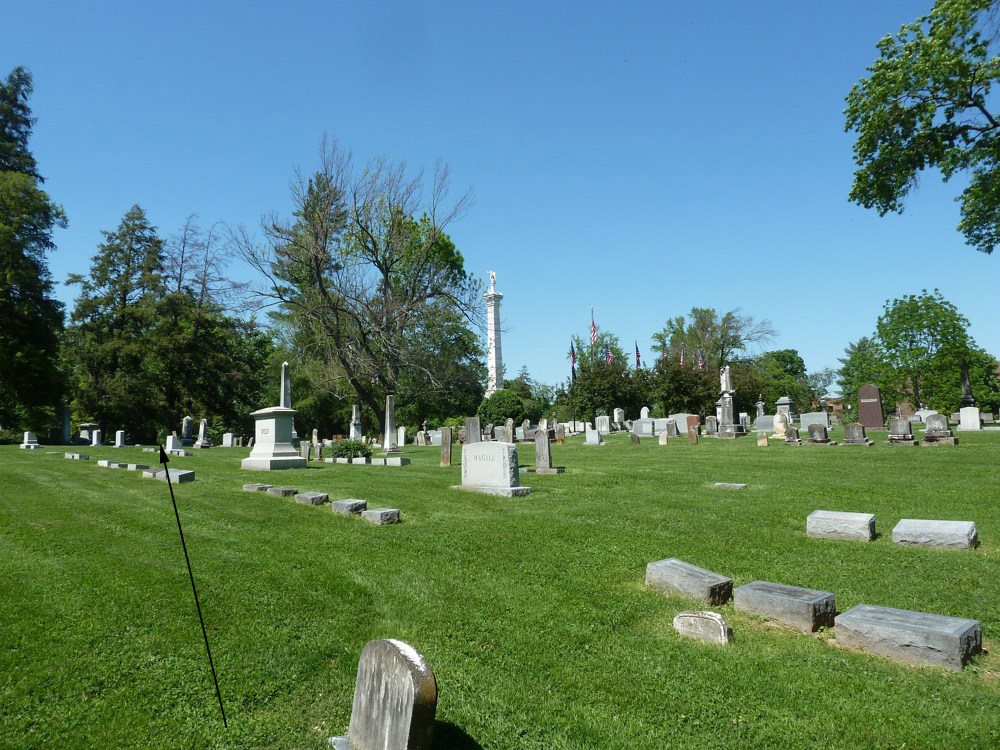 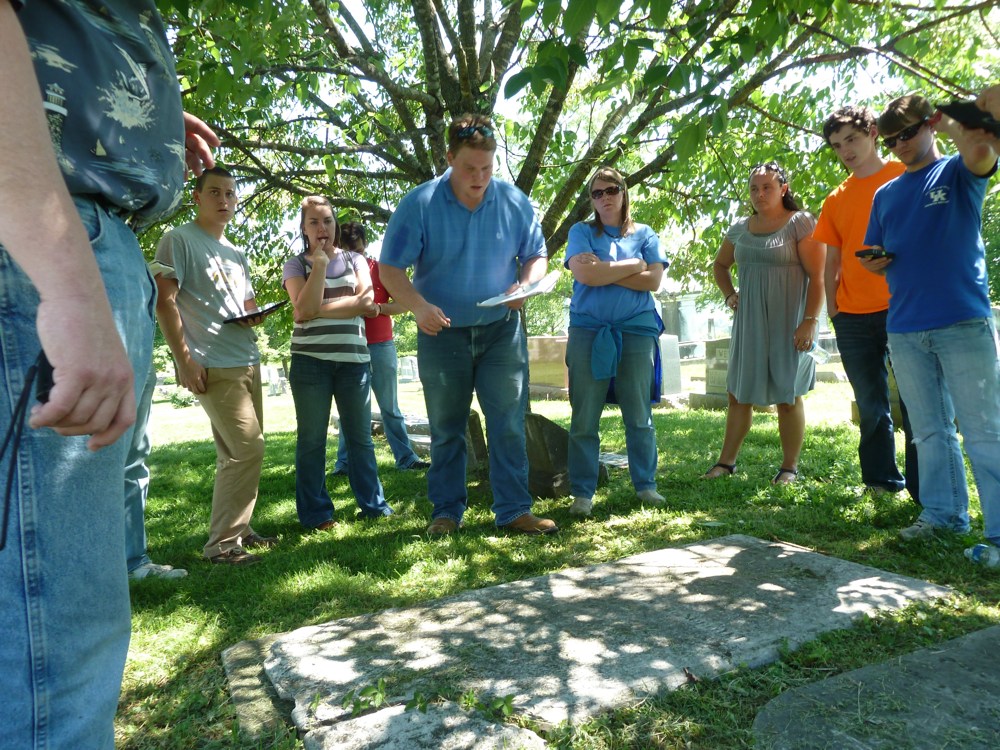 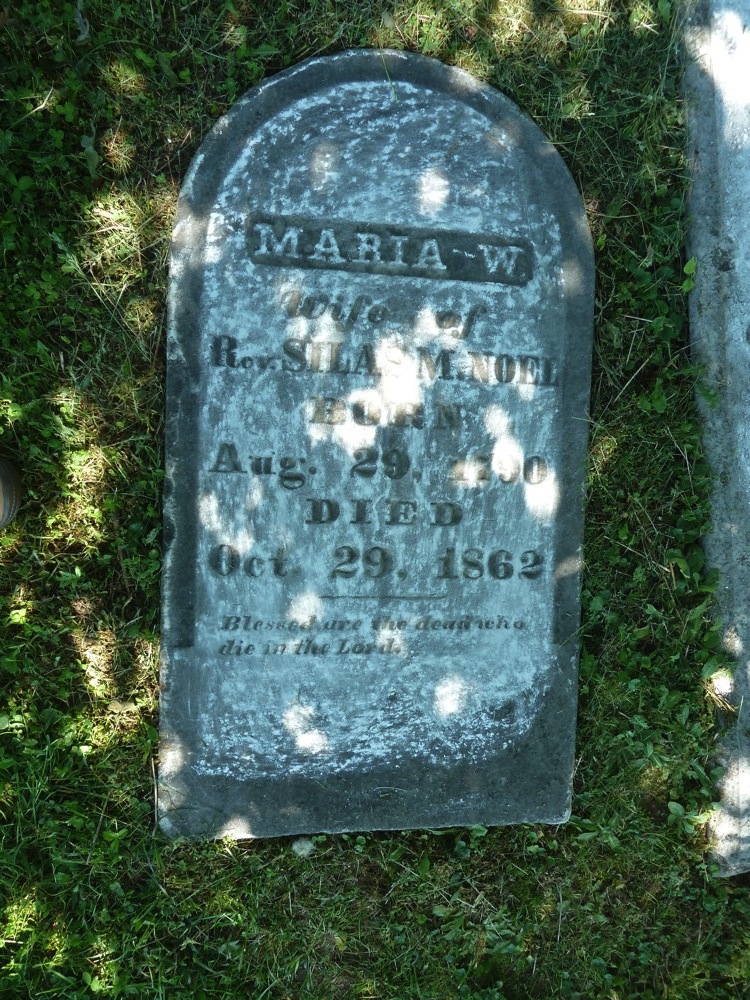 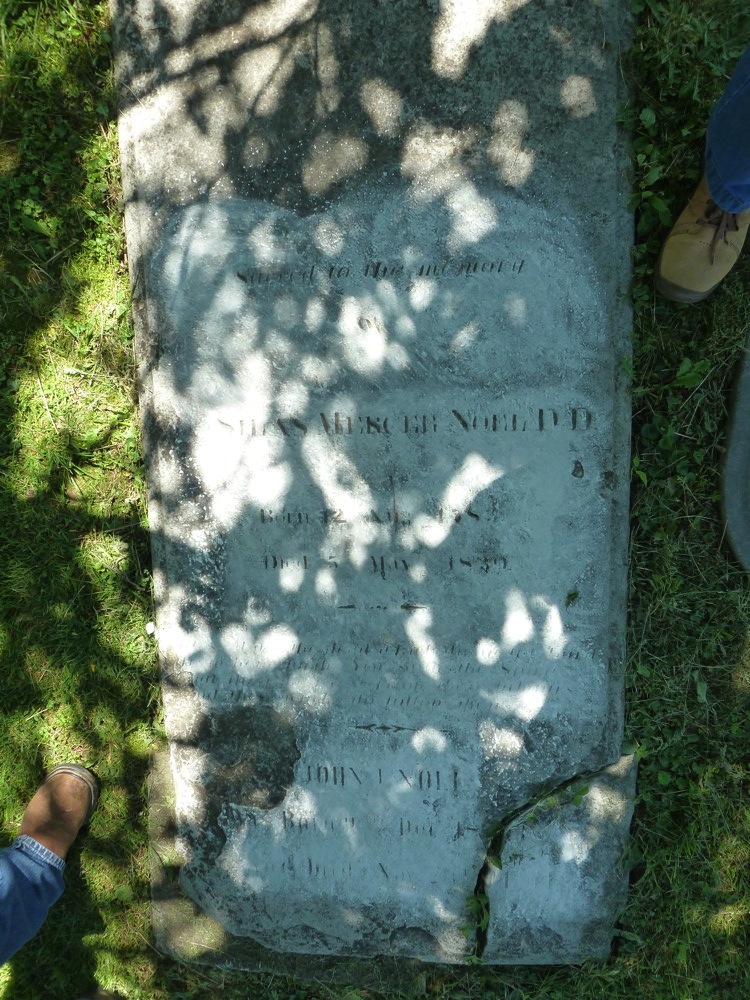 Sacred To The Memory
Of
Silas Mercer Noel, D.D.
Born 12 August, 1783
Died 5 May, 1839
"Blessed are the dead which die in the Lord
from henceforth: Yea, saith the Spirit,
that they may rest from their labours;
and their works do follow them."