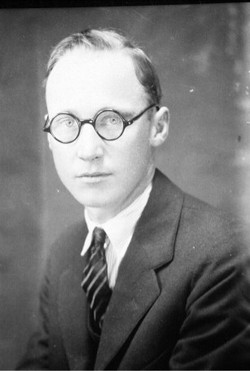 Someone clicking on this link will immediately wonder why a webpage for John T. Scopes appears on TheRestorationMovement.com. For certain, Mr. Scopes had no connection with the Restoration Movement as a participant. However, his life path was crossed by people in churches of Christ. Dayton, Tennessee in 1925 was on the mental radar of every religious person in America, as it was the site of what now is referred to as the Skopes Monkey Trial. Media from all over the country converged upon the rural east Tennessee town that had been embroiled over a high school teacher, John T. Scopes, who was teaching Darwinian Evolution to his high school students. Attempts to quell his influence in the school led to the famous trial. Among the many who were in attendance, Texas preacher, John D. Boren, traveled to attend the debate. A few years before his death in 1993, Boren was interviewed on his recollections of the trip to Tennessee for the Monkey Trial. Any historian connected with the Restoration Movement in America, will want to read his candid and enterprising report on the trial that he attended all those years ago. See John D. Boren's report here.

In 2018, I had the opportunity to make my way over to Paducah, Kentucky to visit the grave of long-time preacher, and church leader, Charles L. Houser, who is buried in the Oak Grove Cemetery in Paducah. Upon arrival at the cemetery, I quickly noted historical markers posted outside the cemetery (photos below) noting that in the cemetery was the grave of John T. Scopes. Naturally, the historian in me was interested in seeing the monument. The the very helpful custodian on hand at the office kindly carried me over to see the grave. Below is the location and photos of the grave of the historical figure, John T. Scopes and his family.

The Skopes Family Plot is located in the Oak Grove Cemetery in Paducah, Kentucky. Located in the northwestern part of the city, the best directions to the cemetery and plot is to take note of the GPS and map below. I visited the grave in 2018 and took the coordinates from the grave location. So, following the coordinates below will get you not only to the cemetery, but also to the plot of John T. Scopes. While there, be sure to visit the grave of gospel preacher, Charles L. Houser. 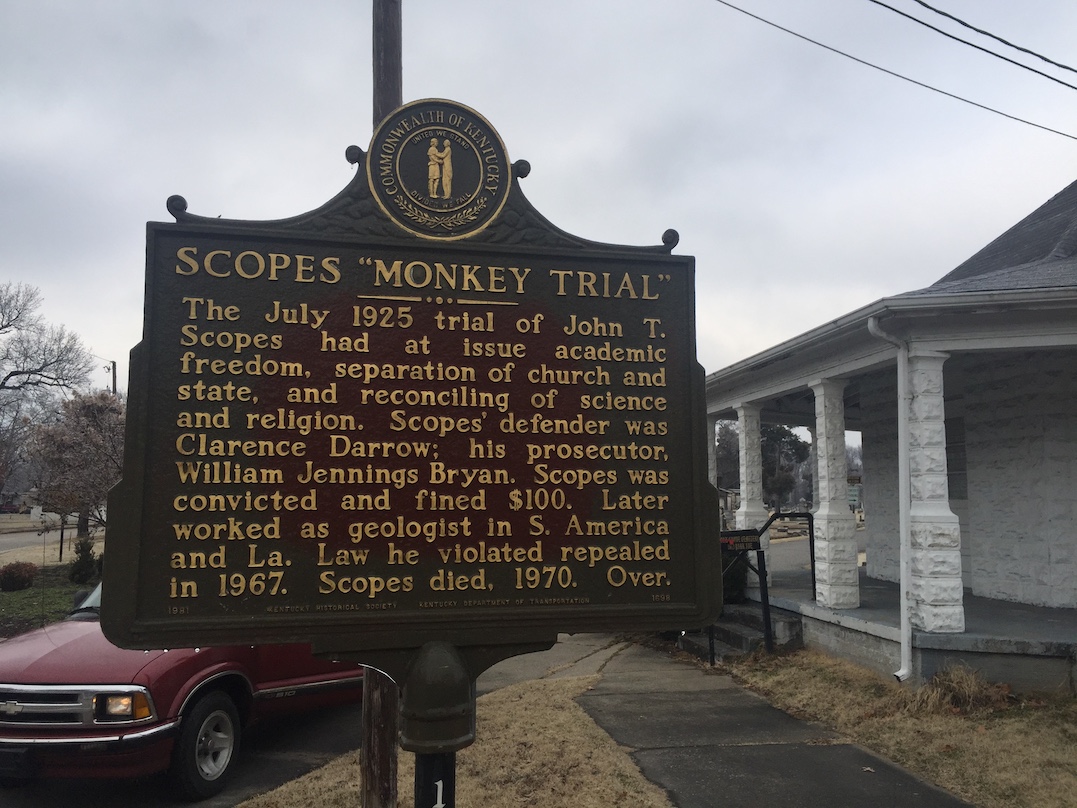 Scopes "Monkey' Trial"
The July 1925 trial of John T.
Scopes had at issue academic
freedom. separation of church and
state, and reconciling of science
and religion. Scopes' defender was
convicted and fined $100. Later
worked as geologist in S. America
and La. Law he violated repealed
in 1967. Soceps died, 1970. Over 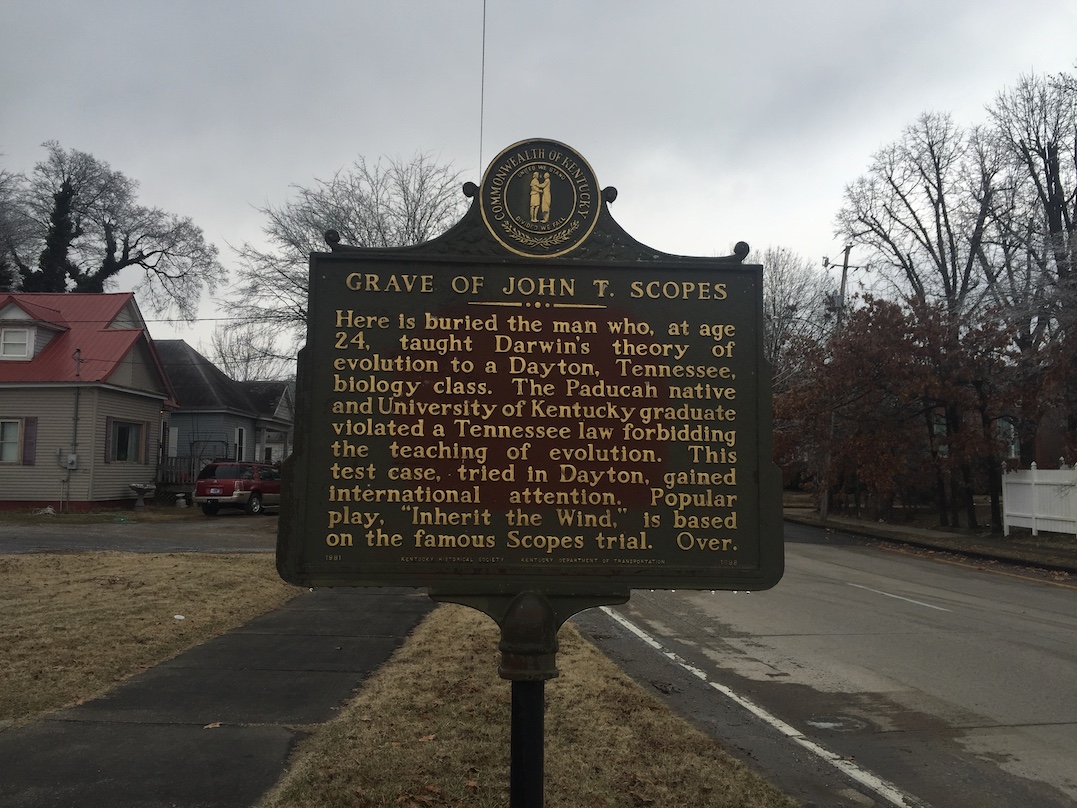 Grave of John T. Scopes
Here is buried the man who, at age
24, taught Darwin's theory of evolution
to a Dayton, Tennessee,
biology class. The Paducah native
and University of Kentucky graduate
violated a Tennessee law forbidding
the teaching of evolution. This
teat case, tried in Dayton, gained
international attention. Popular
play, "Inherit the Wind." is based
on the famous Scopes Trial. Over. 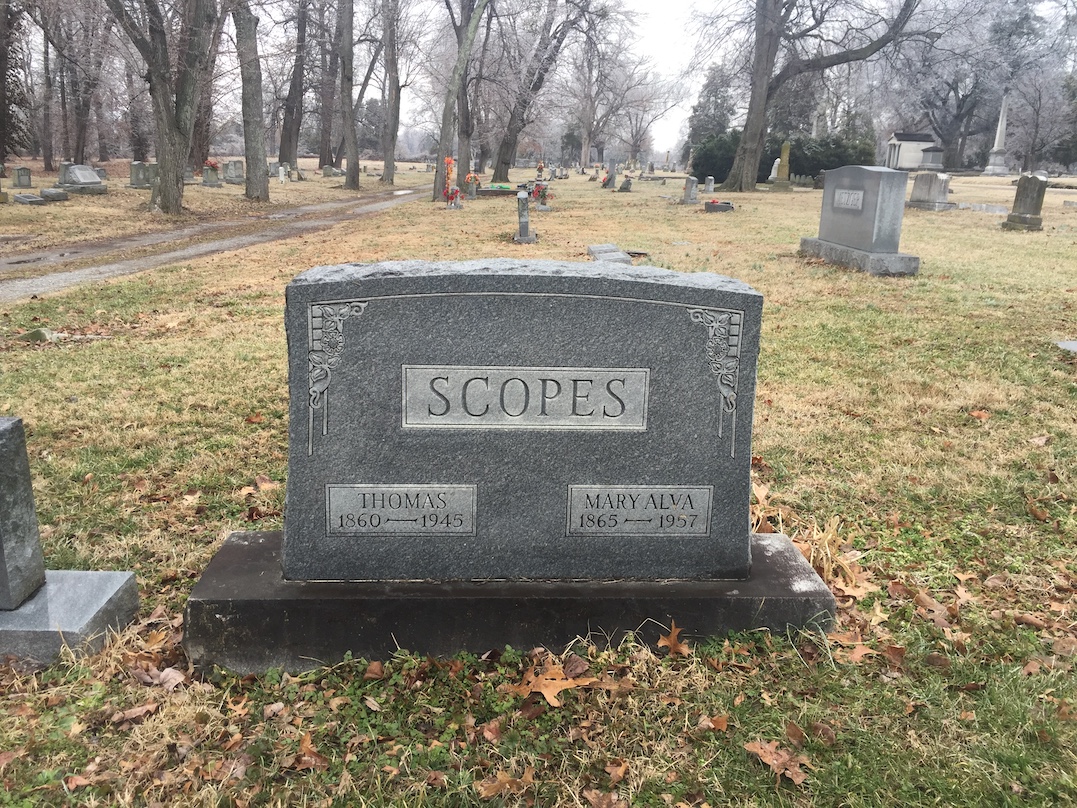 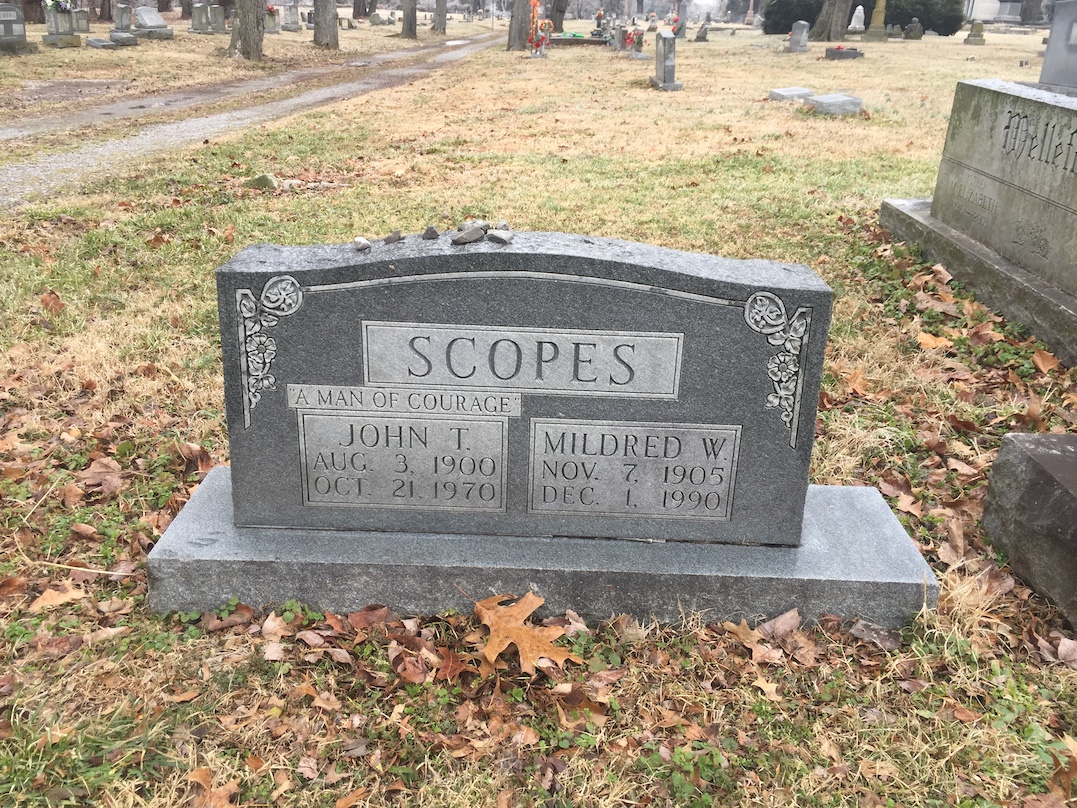