The Life and Influence of Thomas Smith

Thomas Smith was born around the year of 1785. Before the age of twenty he was introduced to Barton W. Stone and the Christian movement. The year of 1804 was when Thomas was numbered among the Christians in northern Kentucky. Joining the ranks of some of the earliest leaders in the Christian Movement, his name soon began to be listed among first generation preachers like John Allen Gano, John Rogers, Jacob Creath, Sr., and Thomas M. Allen.

He and his wife, Mary, lived in Fayette and Garrard Counties most of the years of their lives together. We know of a daughter, Susan, who never married. She died at the young age of twenty in 1848. According to the 1850 U.S. Census they had six other children, ?? R., Nancy, A.M., Diley A., W.A., and Joseph.

In 1817, the Smiths were living in Scott County, Kentucky, when they determined to remove to the southern part of Christian County. With the Joel H. Haden family, they moved to live about 10 miles south of Hopkinsville. Thomas and Joel preached at Mean's Meetinghouse and organized a congregation there. It was during this time that Thomas came in contact with the McGarvey family. John, the father of John William, was a businessman there. He and his family were converted under the preaching of Smith and others. Thomas baptized John there. Sadly, he passed away when John W. was only four years old. While in this region brother Smith also baptised George Poindexter, a long-time leader in the church in Hopkinsville.

Beginning in 1827 brother Smith took leadership roles in the annual gatherings of the North Kentucky Christian Conferences. Sometimes he was listed as "Chairman," and other times "Moderator" of the forum. He was one of the first preachers for the Christian church in Lexington. When the Hill Street Christian Church building was occupied in October 1831, brother Smith was the minister. A couple months later, he and the congregation played host to a merger between the Christians of Barton Stone and Alexander Campbell's Disciples, January 1832. "Raccoon" John Smith (no relation) represented the Disciples at the meeting. Concerning the union, Robert Richardson recalled of Thomas Smith's role in the Memoirs of Alexander Campbell, vol. 2, page 178,

"The person who generally ministered to the Christian Church at Lexington at this time was Thomas Smith, a man of more than ordinary abilities and attainments, and long associated with the movement of B. W. Stone. He was an excellent preacher, and was considered a skillful debater. He possessed withal a very amiable disposition, and was highly esteemed by Mr. Campbell, whom he often accompanied during his visits in Kentucky. He was at first, like others, apprehensive that the proposed union was premature, and that disagreement might arise in regard to questions of church order. The union was therefore post-poned, and matters remained for a short time stationary; but it soon became generally apparent that there were no exclusive privileges belonging to preachers as it concerned the administration of ordinances, and Thomas M. Allen, coming to Lexington, induced them to complete the union and to transfer to the new congregation, thus formed under the title of "the Church of Christ," the comfortable meeting-house which they had previously held under the designation of "the Christian Church." (Note SH - The short post-ponement was due to Thomas Smith and the Christians thinking an ordained minister had to be present to preside over the Lord's Supper).

Bacon College began in Georgetown, Kentucky in 1836. Among those named as members of the Board of Trustees was Thomas Smith, then living in Lincoln County.

Thomas Smith was an evangelist. He sent in reports to the Christian Messenger and Millennial Harbinger of his labors and successes. While in Kentucky, he traveled much toward the south of Lexington, preaching in Richmond, Lancaster, on Duck's River in Garrard County, and Lincoln County.

In 1843 he made preaching tours into Missouri, attending the state meeting of churches in Fayette in May. In 1849, when the American Christian Missionary Society was formed, Smith and several of the other, older men of the Restoration, like the Creath's both senior and junior, Philip S. Fall, John Rogers, and President James Shannon refused to participate in it, seeing that it represented much of what they intended to leave behind in denominationalism.

In 1909, J.W. McGarvey, during a speech he gave in the Lexington Cemetery, stated that Thomas Smith was among the eight great pioneer preachers of the Christian Church. He referenced his working closely with John T. Johnson and Raccoon John Smith. McGarvey recalled him as having been "not so conspicuous as his two companions, but he was a godly man, full of faith and the Holy Spirit."

All in all, brother and sister Smith fall into the category of unsung heroes of the early years of the Restoration Movement in Kentucky. He baptized many and assisted in the development of men to preach. When Thomas M. Allen began preaching it was Thomas Smith and Barton Stone who ordained him for the ministry.

The last years of Thomas' life left him infirmed, and unable to travel as in the early days of his ministry. But, he continued to be respected for his leadership in the movement. He passed from this life March 18, 1861. Burial followed in Lexington Cemetery. Mary lived several more months but passed away before the end of the year on December 3rd, and was buried next to her husband.

This writer has only been made aware of the person and work of Thomas and Mary Smith for only a short time. Research has turned up only scant references to their lives. But, they were among the highly respected leaders in the early days of the Restoration Movement, and are worthy of great praise. 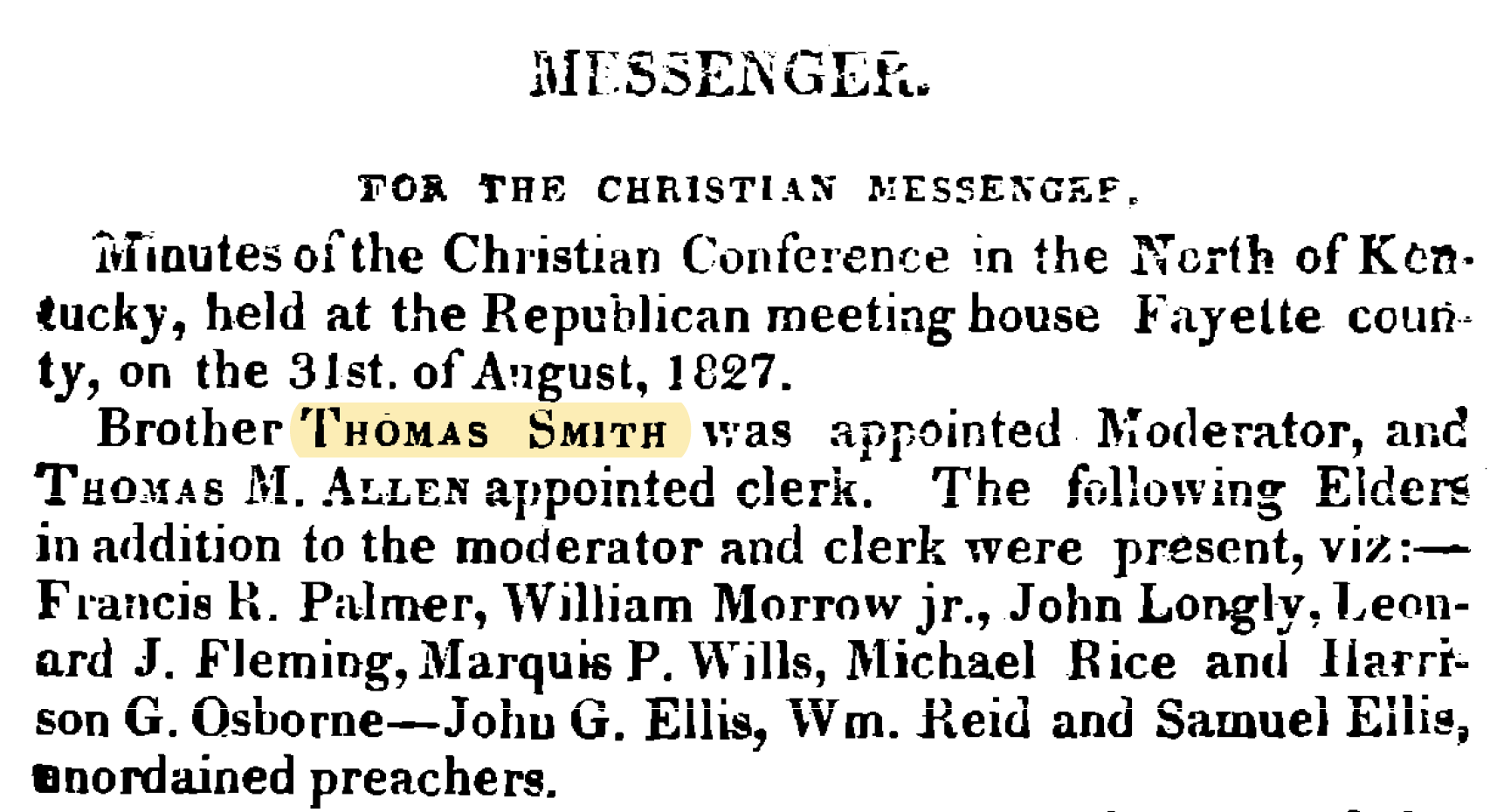 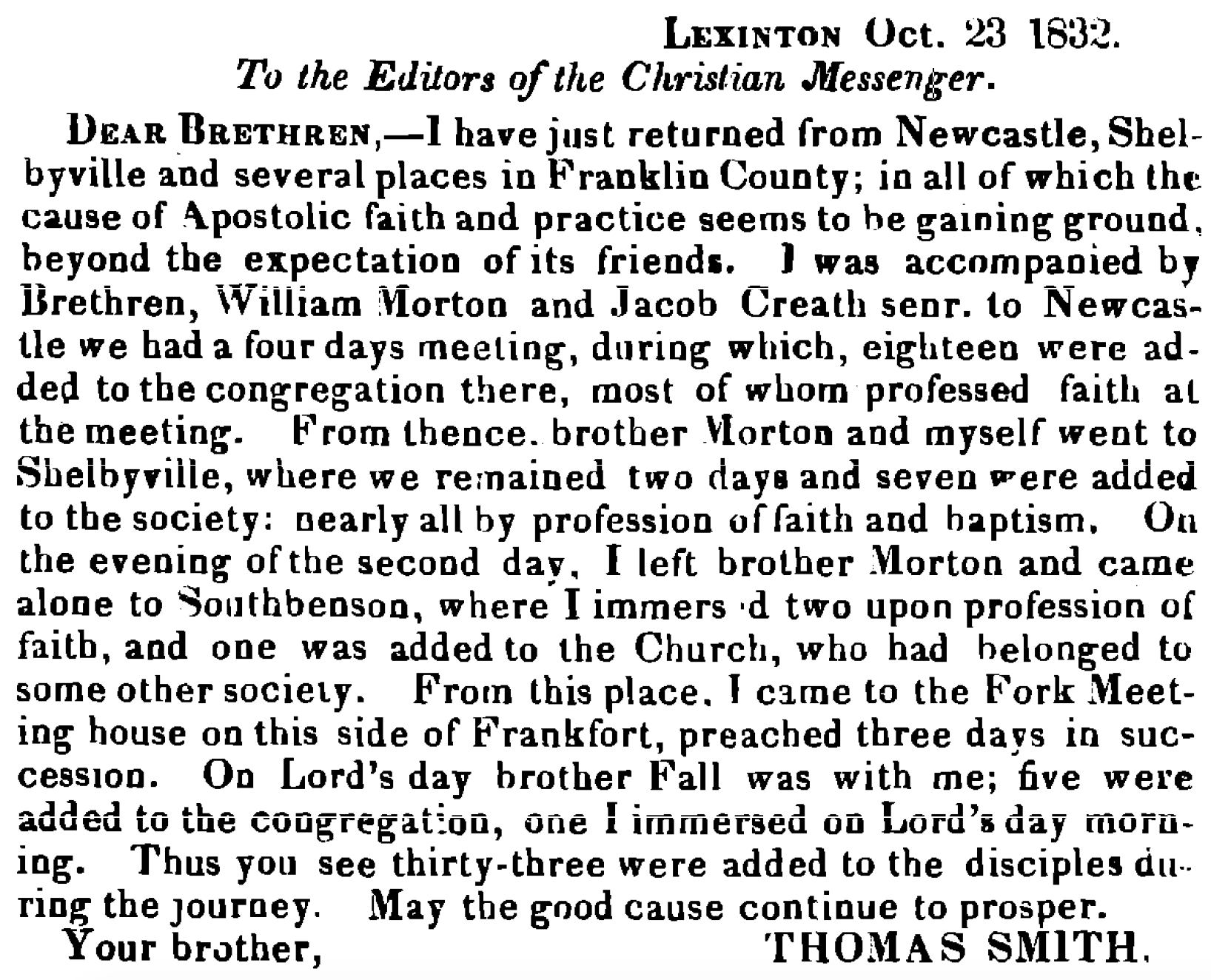 Dear Brethren—
I sit down to give you some information, concerning the progress of our reformation, which has recently come under my own observation. At a three days meeting held at the Forks of Dicks-river, commencing on the Saturday before the first Lord's day in May, brethren present: John Smith, John Rogers, William Morton, G. Elley, with several others.— Eleven were immersed and four or five united with the brethren at that place, who had been immersed. It was truly a happy season to the brethren who attended the meeting. On the fourth Lord's day, and Saturday before, in June, I attended alone, at the same place, and had another refreshing season. By many I was not expected on account of the Cholera in Lexington, so that but few attended on Saturday. After a short address four came forward and made the good confession— a solemnity and feeling were manifested which were unusual. On Lord's day three more made confession of faith, and all were immersed the same evening, where there was much water.

I will now come nearer home. On account of Cholera I removed my little family to the neighborhood of Republican, where you know I have long labored. The good work in this neighborhood, since my arrival, seems to progress finely—fifteen have come forward to unite with the brethren at Republican—all—except one by profession of faith and baptism. Were it not for my feeble condition, I would exert more than I do.
Pray good Lord save the people.

Lexington Cemetery is located on West Main St. in Lexington, Ky. After entering the cemetery, head toward the large Henry Clay monument. The next section over from the Clay monument is Section C. Go to Lot 15, Part N to find the Smith plot. From the Smith plot you can easily see the Clay plot and J.W. McGarvey's grave. 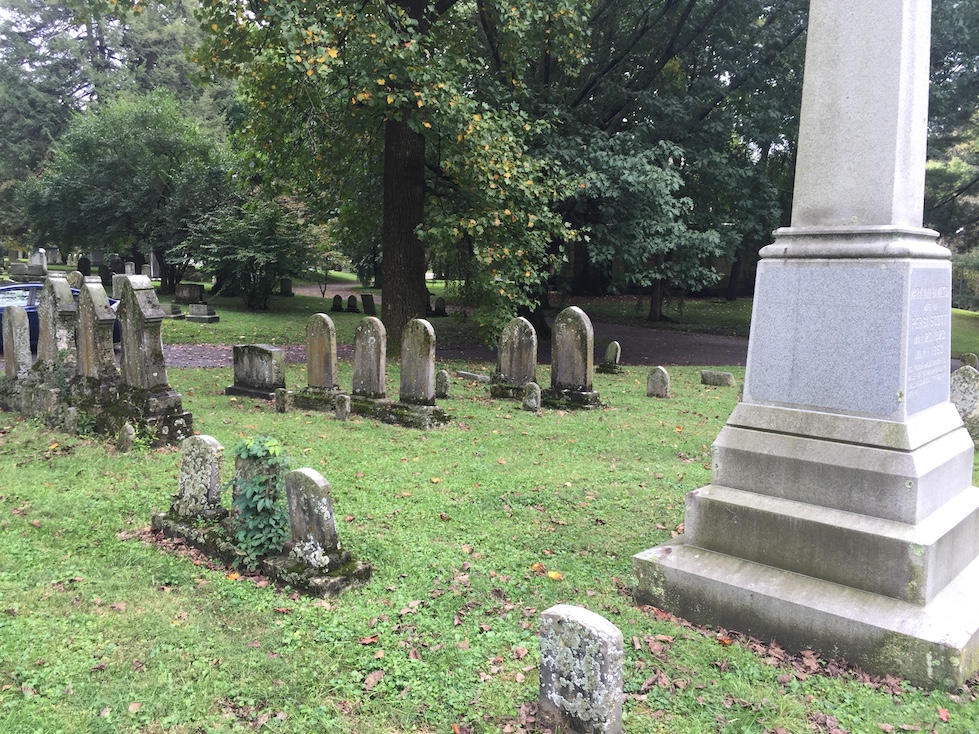 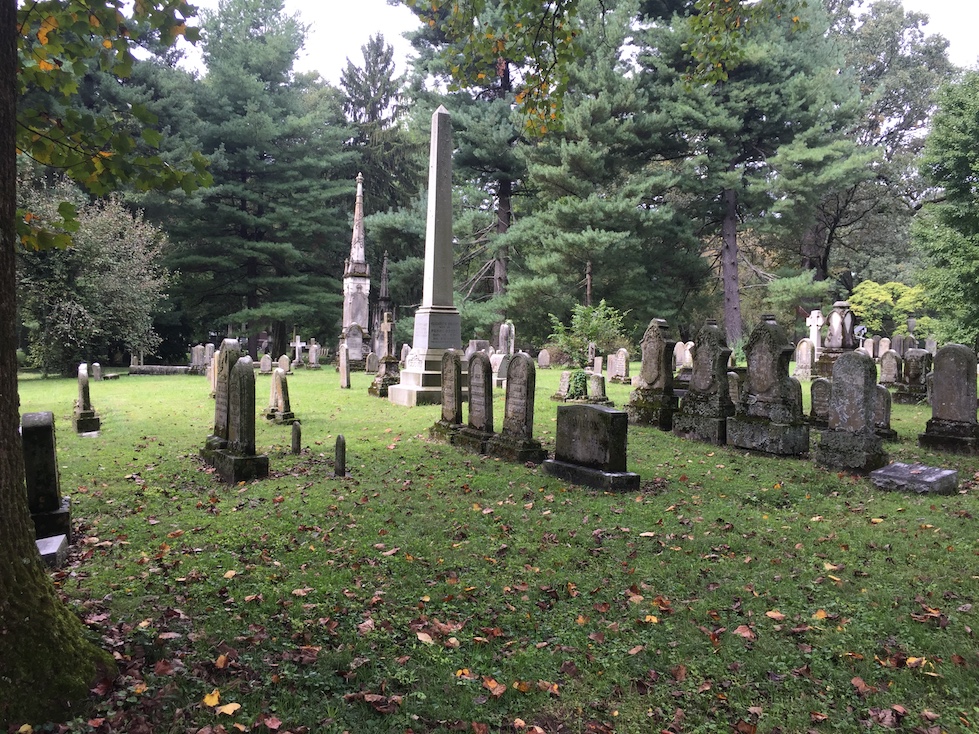 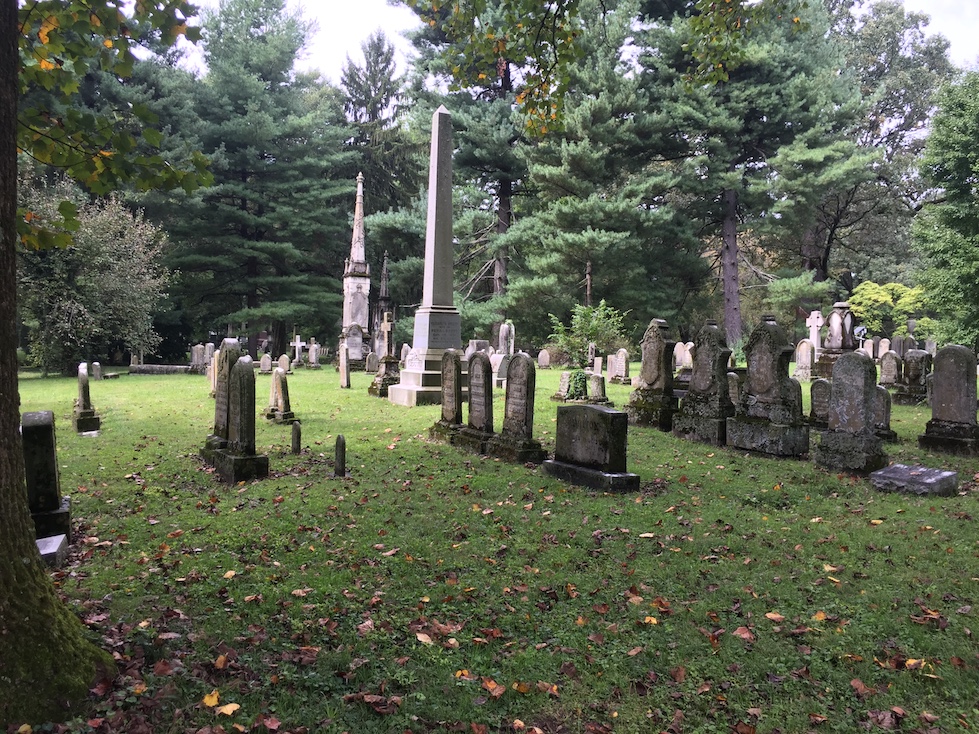 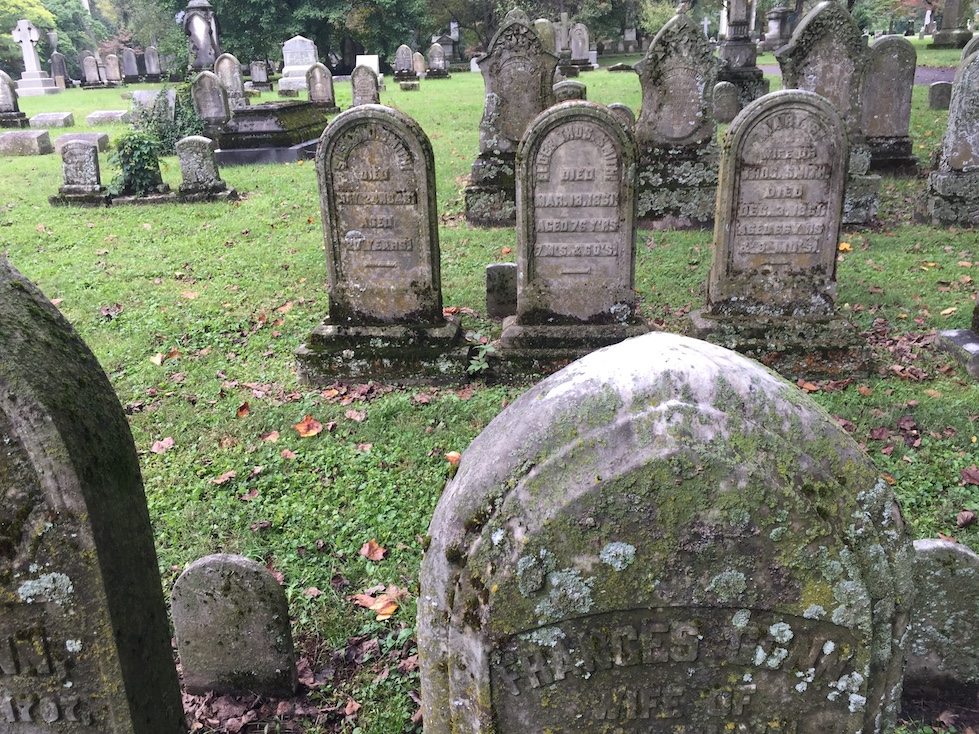 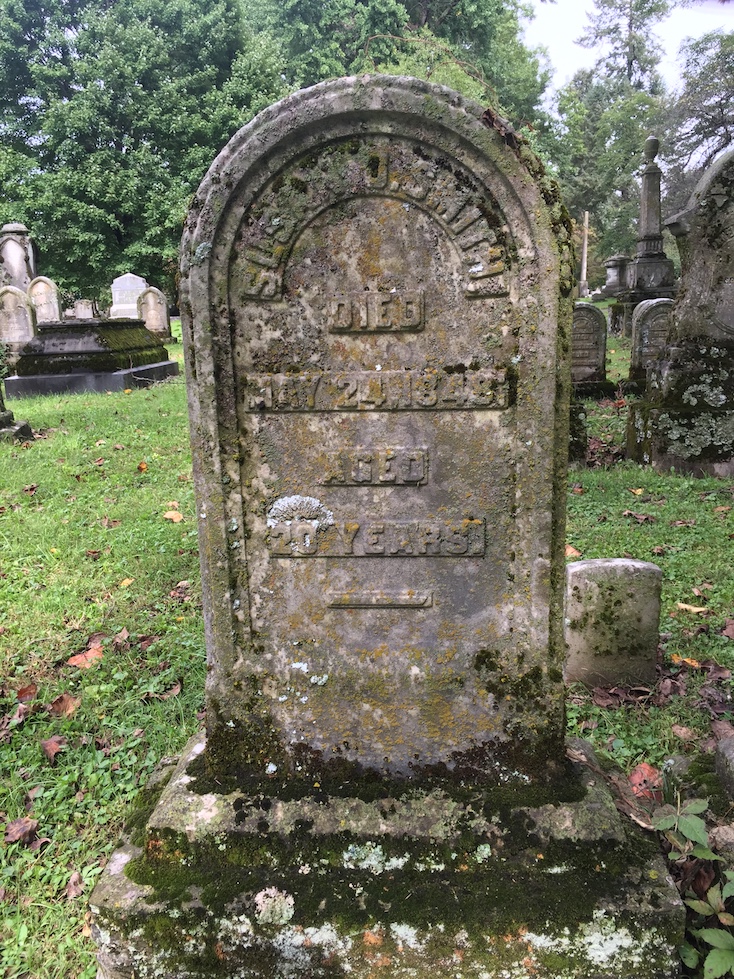 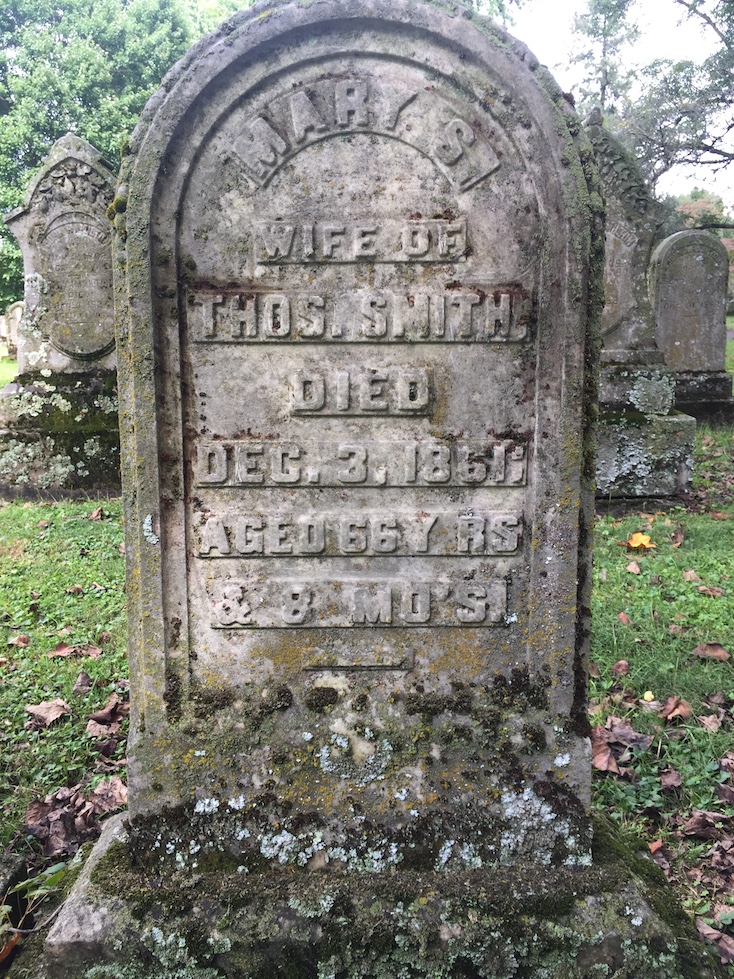