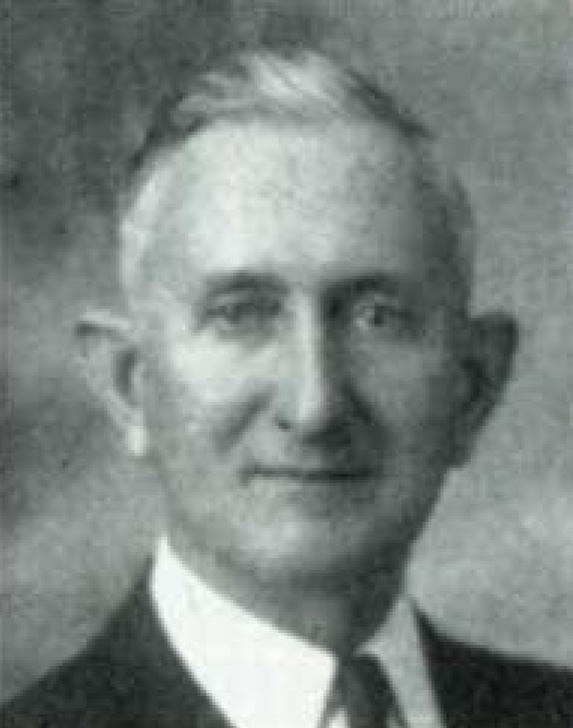 The Life of Charles D. Tidwell

Charles Tidwell was born in Dickson County, Tennessee, December 5, 1889. He was married to Fannie Joe Totty. They had two children, one of which made a gospel preacher, Charles Dennis Tidwell, Jr.. His youngest son was Newell Ray. Charles attended Nashville Bible School (today Lipscomb University). He began preaching in Natchez, Mississippi in 1914. Churches he worked with through the years include from 1925-1939 he did mission work in Georgia, holding meetings in and around Bogart and Athens, helping to establish churches in both locations. He preached for a time for the South side church in Macon as well as the local preacher in the late 30s for the East Point church of Christ in Atlanta. He moved back to Tennessee in 1940 and began preaching for the church of Christ in Portland, Tennessee. He was there until 1946 when he moved to take the work in Sparta, Tennessee. In 1949 the family moved to Dresden, Tennessee where they continued for several years. In the early 1950s he moved to preach for the Tompkinsville church of Christ in Tompkinsville, Kentucy. In the mid-1950s he preached at Weatherly. In the 1960s he preached for a time for the Hendersonville church of Christ.

Through the years he did radio work at Cookeville, Tennessee on WHUB. When living in Dresden, he did radio work in Paris on WTPR. He conducted four to six gospel meetings each year.. He also labored around Atlanta at the East Point church, and at South Side in Macon. In the years of his ministry he baptized several hundred people.

His last years were spent in Gamaliel, Kentucky working with the church in that town. He passed from this life, June 18, 1964. Burial followed in the Gamaliel Cemetery, just across from the church of Christ. 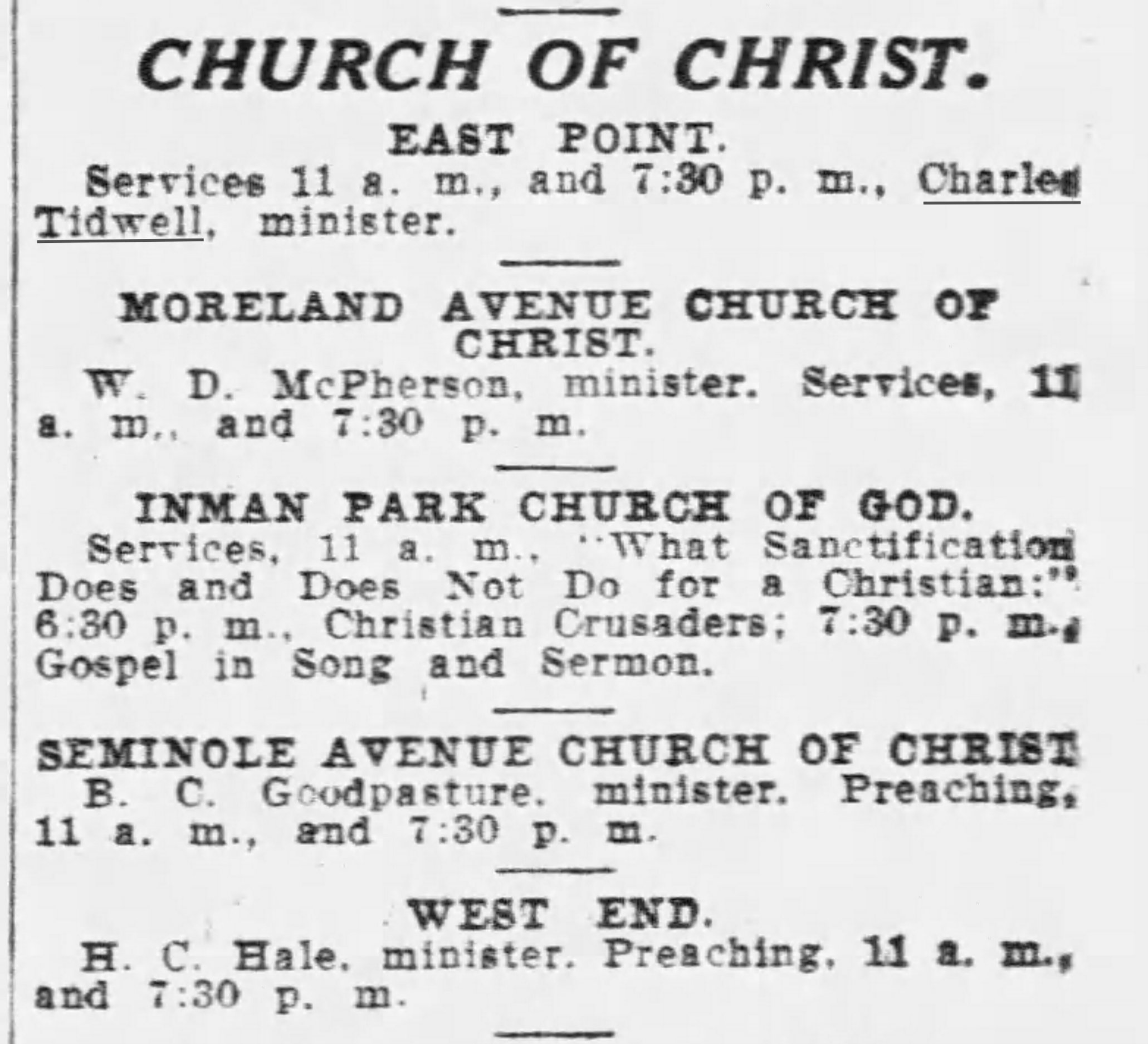 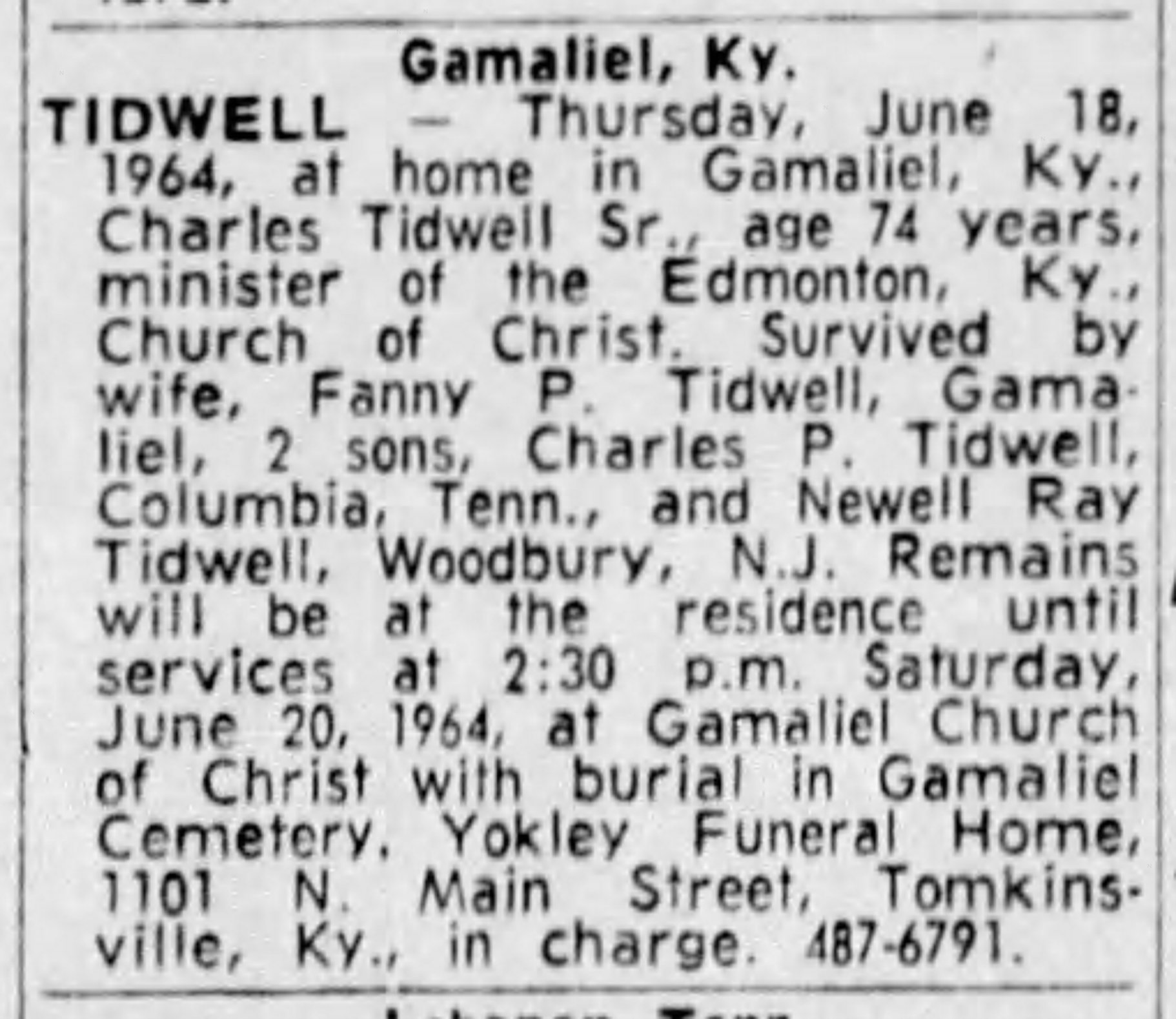 Charles D. Tidwell, Sr., a faithful preacher of God"s word for almost exactly fifty years, passed away suddenly at his home in Gamaliel, Ky. June 18, 1964.  Born in Dickson County, Tenn., December 5, 1889, he was baptized by W. R. Hassell in July, 1910.  He attended Nashville Bible School and began preaching in Natchez, Miss., in 1914.  He was married to Fannie Joe Totty in 1917 by C. E. W. Dorris.  To this union were born two sons; Charles D., now minister of Riverside church of Christ, Columbia, Tenn., and Newell Ray of Gamaliel. He is also survived by Mrs. Tidwell and six grandchildren.  For half a century this humble, but very capable man proclaimed the word.  He preached regularly at Miller, Nebr.; Bogart, East Point and Macon, Ga.; Portland, Sparta and Dresden, Tenn.; Avon Park, Fla.; Gamaliel and Edmonton, Ky.  Brother Tidwell was ever a humble type of man, but one who knew that the issues of life are truly bound up in the word.  He was never the "big," popular, crowd-pleasing type of preacher.  He was a kindly, humble, unassuming, but deeply reverent and thoroughly conscientious character.  He was a thorough scholar in a wide range of subjects, but of especial breadth and depth in anything pertaining to the truth.  He lived and preached with "the simplicity that is in Christ."  May his kind be multiplied in the earth as he passes the torch to succeeding generations."
John H. Renshaw.
Gospel Advocate, August 27, 1964, page 557.

Gamaliel Cemetery is located in the little Kentucky/Tennessee border down of Gamaliel, Kentucky. There is no really straight and easy way to get there. From Nashville, Tennessee it is probably best to head out I-40 west to Gordonsville and head north on Hwy. 53 to Carthage. Continue north out of Carthage on Hwy. 25 a few miles and turn right on Hwy. 80. Travel Hwy. 80 several miles and it will run into Hwy 56. Head through Red Boiling Springs and continue north on Hwy. 56. At the Kentucky line the road becomes Hwy. 63. When you get into Gamaliel turn left on W. Main St. You will see the Gamaliel church of Christ on the left, and the cemetery on the right. Enter the main gate and the Tidwell monument will be the second marker on the right. 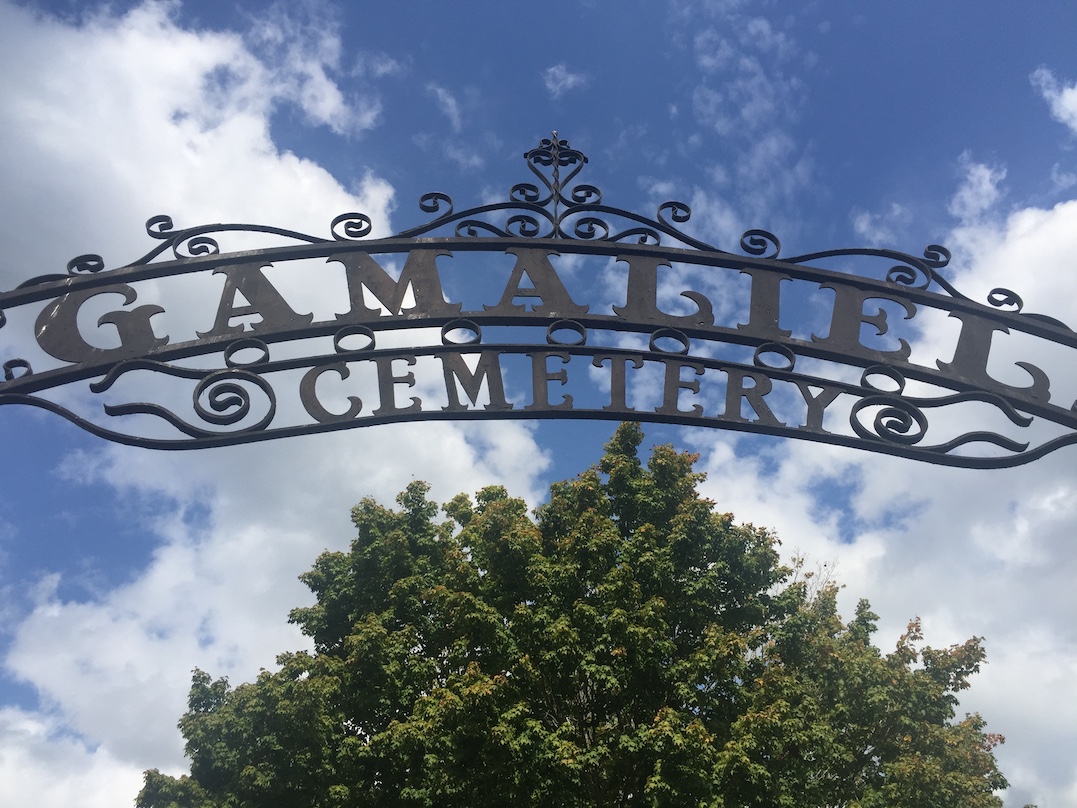 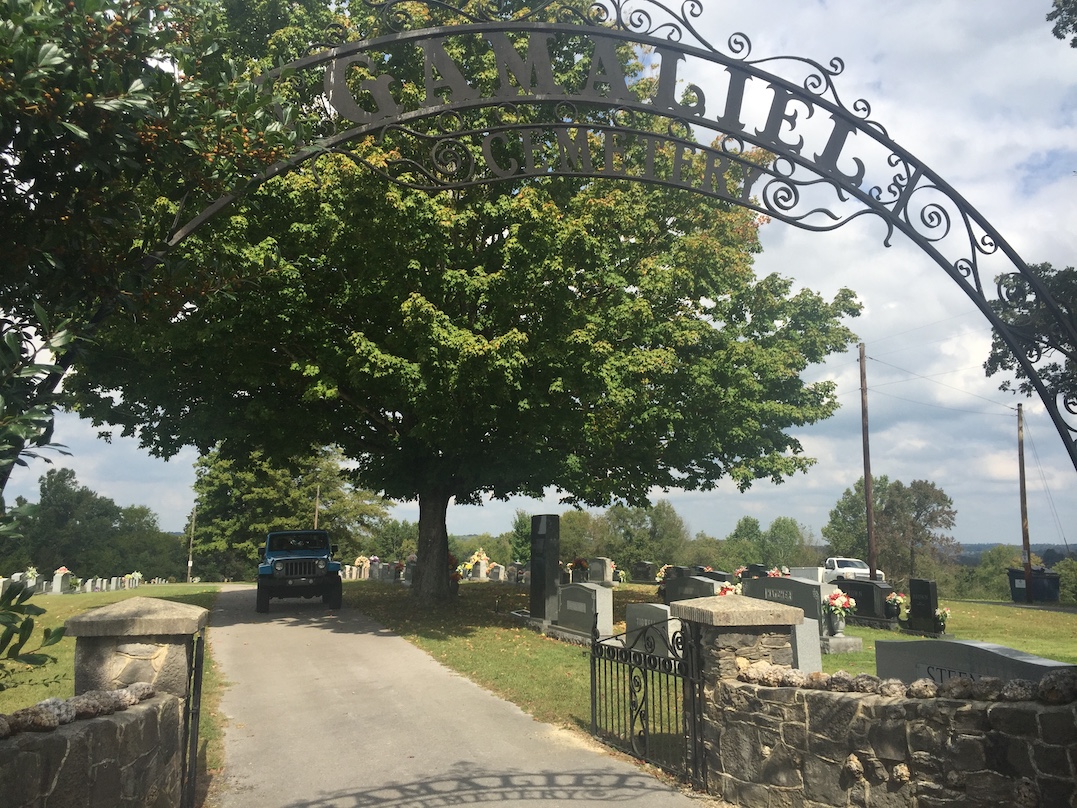 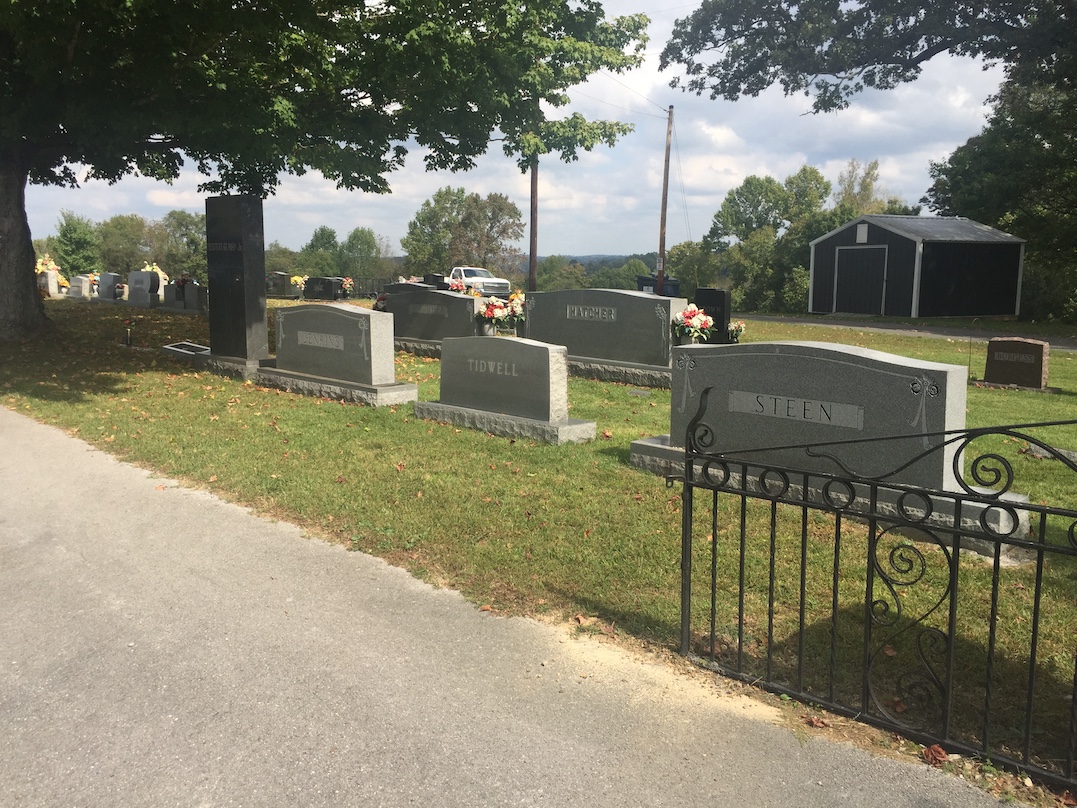 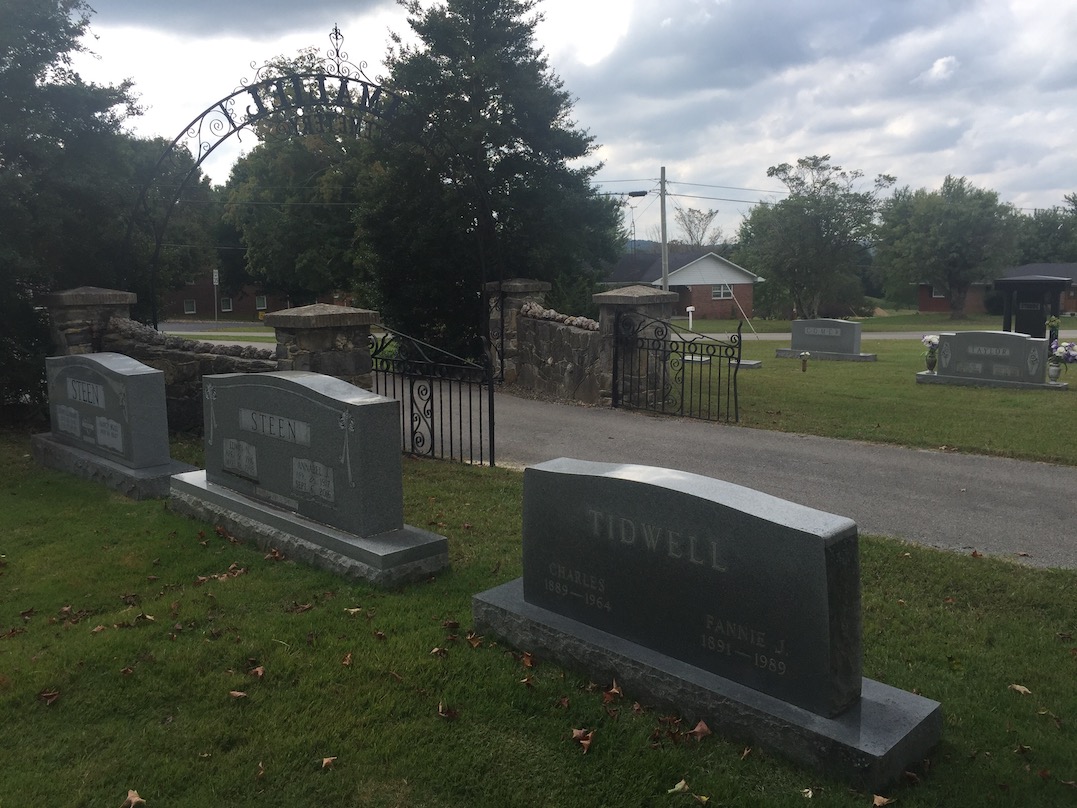 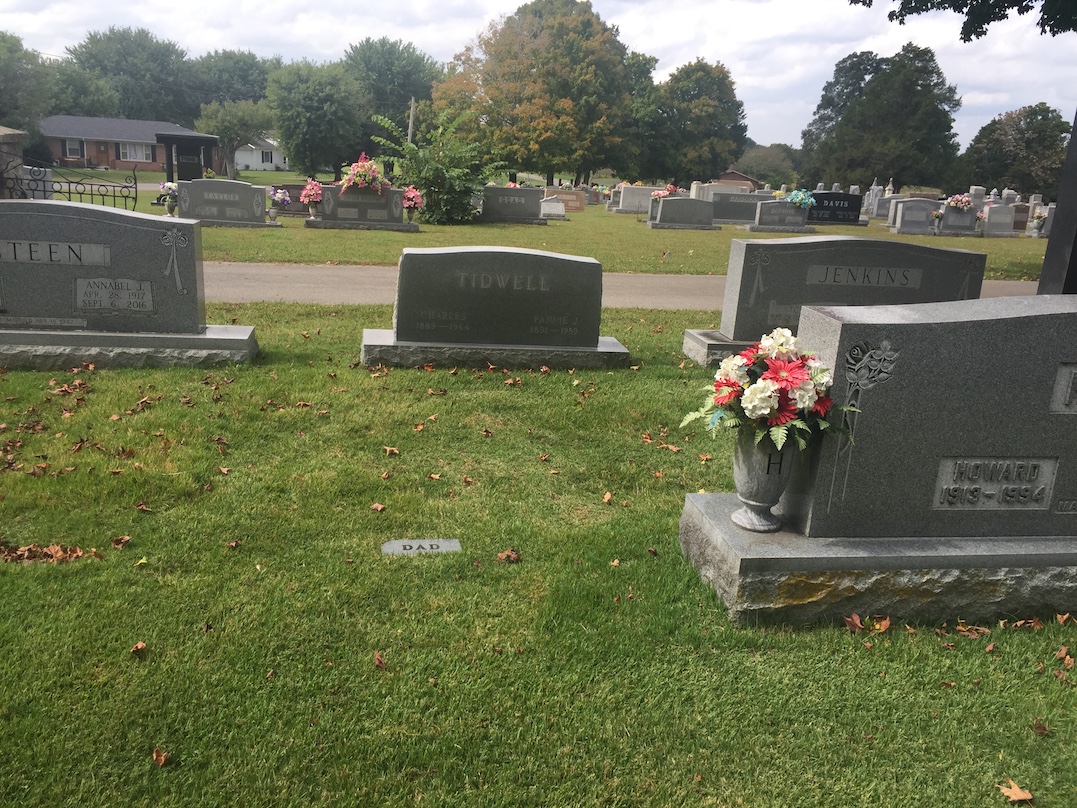 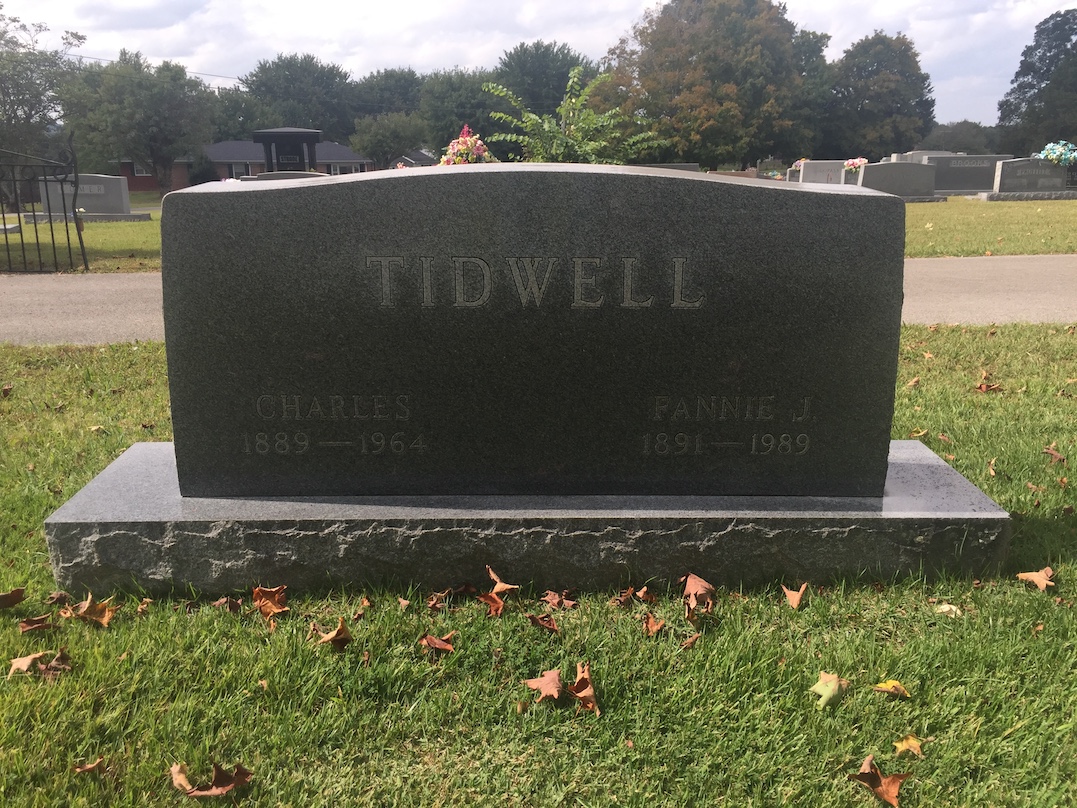