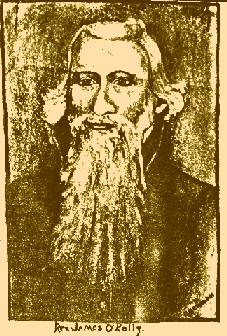 James O'Kelly was a follower of Wesleyism - or Methodism. On Dec. 25, 1784 John Wesley sent a letter to the American (Methodist) churches giving them their independence from the England churches and direction. With it however was an appointment of Francis Asbury as head of the

American Methodist Church. Francis Asbury was a most difficult person to follow. His methods were harsh. It was "his way or no way!" One point of difficulty O'Kelly had with Asbury was his control over "Circuit Riders" of which he was one. Asbury told the traveling preachers where they could and could not preach. He scheduled them the way he wanted. On one occasion O'Kelly put forth legislation so that if a preacher was assigned to a certain location he didn't want to go he could apply for another place. Asbury completely rejected it. In response O'Kelly developed the view that it was not acceptable to God for one man set over the churches. On Dec. 25th, 1792 the day of Asbury's appointment he walked out of the Methodist conference with about 1/2 of those in attendance. O'Kelly and his followers kept the Methodist name for another 5 or 6 years calling themselves, "The Republican Methodists." "Republican" meant "freedom," hence "Free" Methodists. They were free to pursue Bible truths. 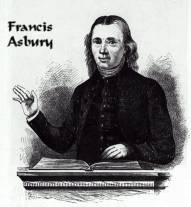 On August 4, 1794 - Rice Haggard, another preacher in the area, attended a conference at "Old Lebanon," in Surry County, Va. There he suggested they get rid of the denominational name and be called simply, "Christians." - Back to the Bible. With it the establishment of the first "Christian" church in America near Flavana, Virginia. This marked the coming together of three groups into Christian unity: The Smiths, O'Kellys & Jones. Later, in 1804, this same Rice Haggard would move to Kentucky and suggest the same thing to another man there, Barton Stone. According to Barton W. Stone, in the Christian Messenger, 1826-1827, O'Kelly was with Haggard and officially joined the Christians at Cane Ridge at that time. James O'Kelly's theology was very close to N.T. Christianity. He believed in partaking the Lord's Supper on the 1st day of the week. He taught that the collection was a free-will offering. He believed in Singing, Preaching, Praying, admonishing the saints. He failed at baptism. He didn't believe immersion was necessary, that sprinkling would suffice. He was never immersed. In 1789 he wrote Essays On Negro Slavery, which was one of the earliest anti-slavery tracts written by a clergyman. Note the historical development that took place through his influences. Many under his influence moved to Kentucky, Georgia, Tennessee and other places and found many in the Restoration Movement with whom they could unite. In Georgia, one such group was the small band of at Skull Shoals in Oconee County. In the 1840s, after being influenced through the Restoration Movement, they became known as Antioch. One of its early converts was Nathan Smith. However, the O'Kelly movement also went in other directions. In 1856 the Christian Churches under O'Kelly formed the Southern Christian Convention. In 1931 it merged with the Congregational Church to form the Congregational Christian Church. In 1957 the denomination merged with the Evangelical and Reformed Church to establish the United Church of Christ.

James O'Kelly was one of our nation's first to unshackle himself from denominational error, and actively pursue the church we read of in the New Testament. All this was done years before the influence of Barton Stone or Alexander Campbell was felt on the American Frontier.

Chronology Of Life Of James O'Kelly

1785-1792
O'Kelly served as presiding elder in southern Virginia. As many as 28 preachers under his supervision. Became dissatisfied with episcopal government of Methodist Church and with Asbury's autocratic rule over church

1794
August 4th meeting of Republican Methodists as Old Lebanon, Surry County, Virginia, Rev. Rice Haggard suggested adoption of name "Christian" to exclusion of all others. Rev. Hafferty of N.C. moved to take the Bible itself as their only creed. Plan of church government adopted: elders in each church. Christian Church is the result.

1798
Under pseudonym "Christicola" O'Kelly published The Author's Apology for Protesting Against the Methodist Episcopal Government. Based on material supplied by Francis Asbury, Nicholas Snethen issued a Reply (1800). O'Kelly published A Vindicator Of An Apology (1801). Other works by O'Kelly: Essay on Negro Slavery (1784), Divine Oracles Consulted (1800), and others

1809
Christian Church had 20,000 members in southern and western states

1808
Herald of Gospel Liberty was begun by Elias Smith in New England. Christians in southern states (O'Kelly group) and those in New England exchange greetings

1811
Elias Smith present at conference of Christian churches. Given right hand of fellowship. Marked something of a formal union between O'Kelly group and New England Christians

It has been some years since I visited the grave of James O'Kelly. When I visited, the little cemetery was in a poor condition. However, I have come to understand that the cemetery has received a facelift with fencing. It now sits in the middle of a new subdivision in Durham, North Carolina. Heading east from Greensboro, N.C. on I-85/I-40 until it splits. Continue on I-40 toward Raleigh 16 miles and take Exit 274 (Hwy. 751 / Jordan Lake Exit) and turn right. Go south about 2.0 miles and turn right into the Colvard Farms sub-division. Follow the main road into the sub-division about a mile (an estimated distance from memory) take a left onto a road called Crimson Oak. Follow Crimson Oak until you come to the place where a "Nature Trail" crosses the road. (Just before a sharp turn to the left). This is a nice paved neighborhood walking trail. Take the trail to the left and you will soon come to the O'Kelly cemetery beside the trail on your right. The small cemetery is surrounded by a black iron fence. The O'Kelly monument is clearly seen from the trail. 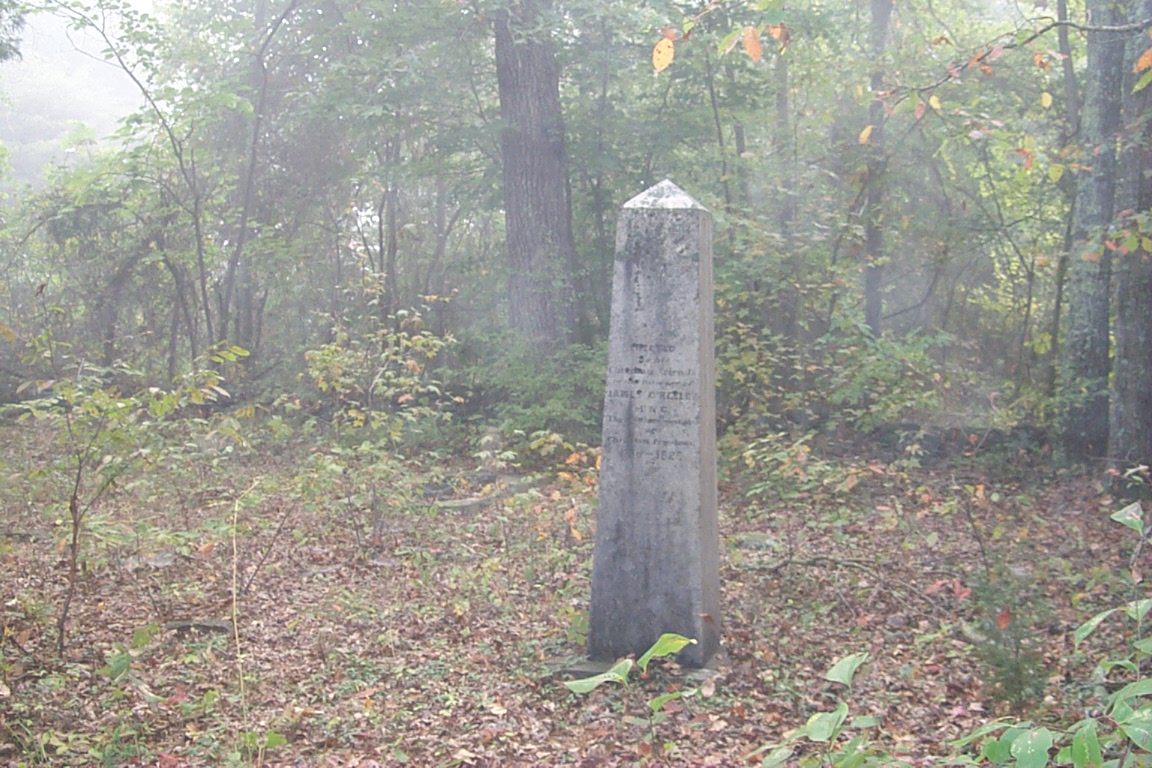 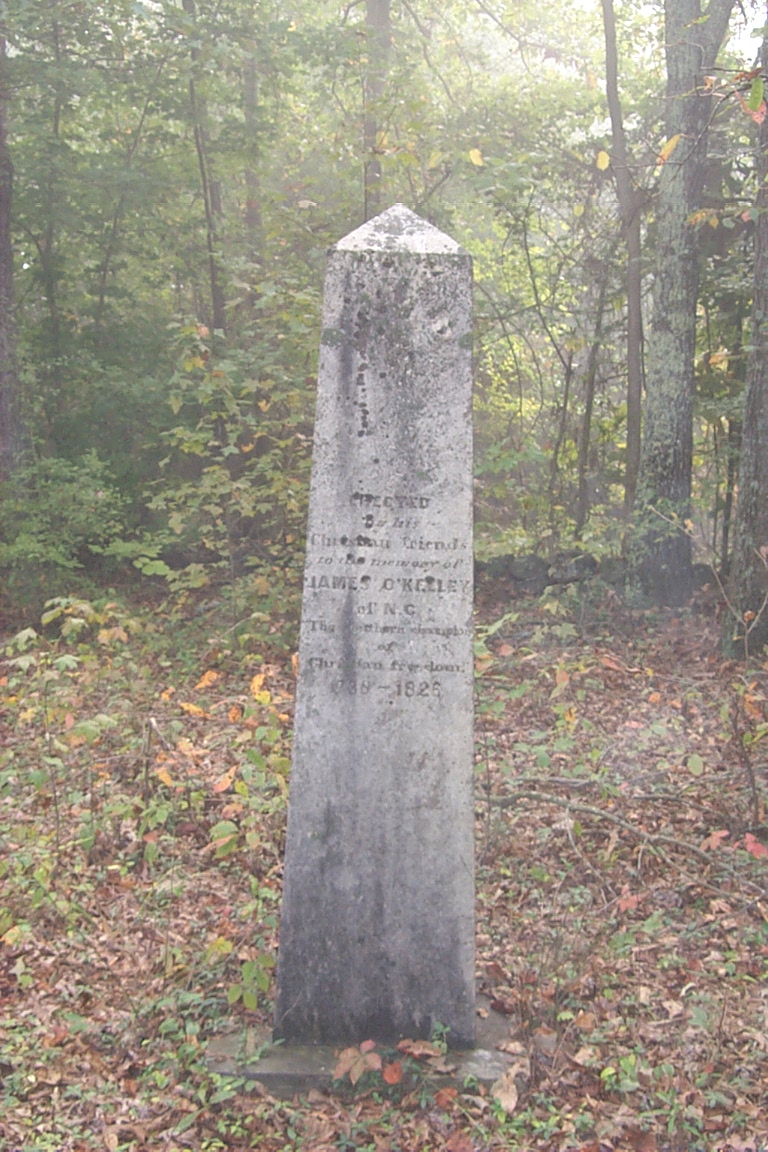 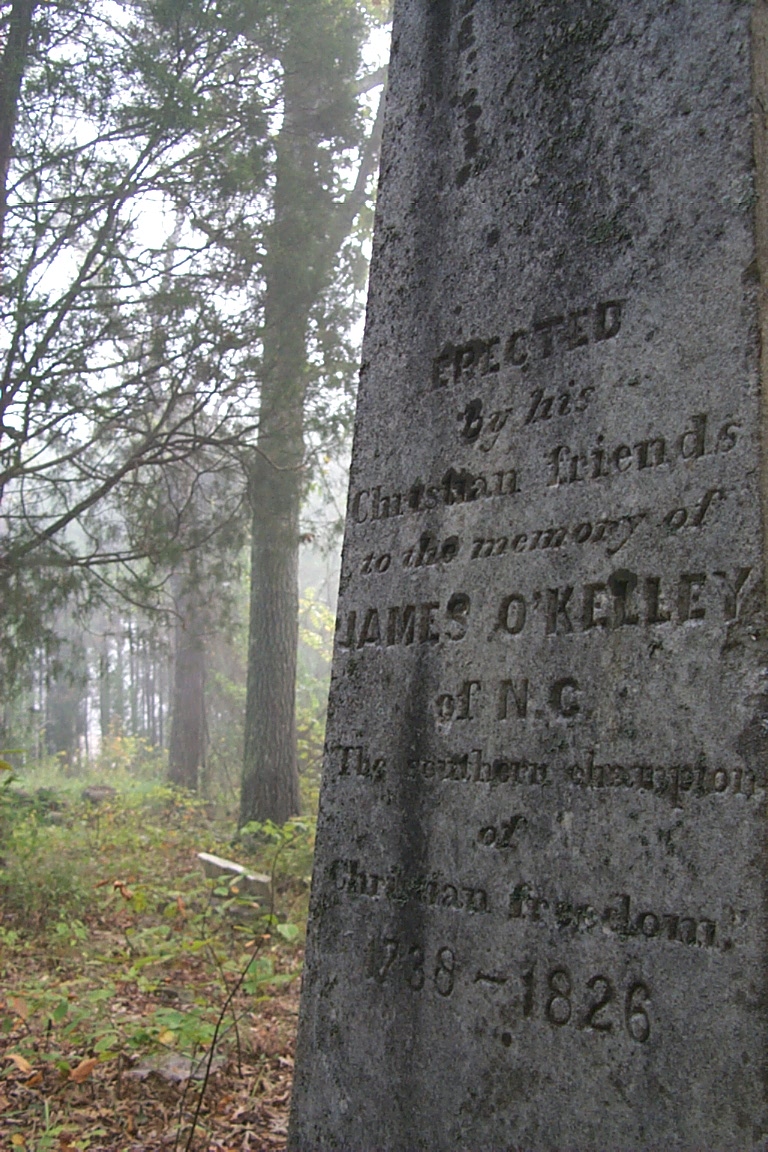 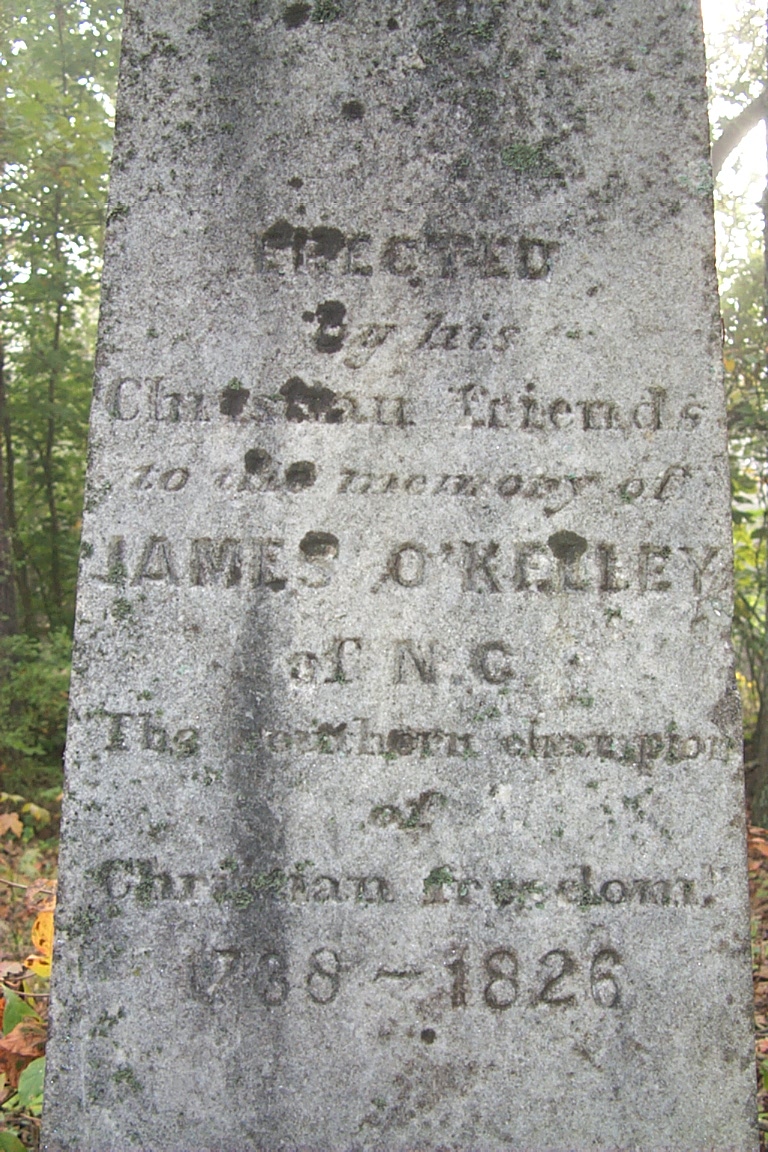 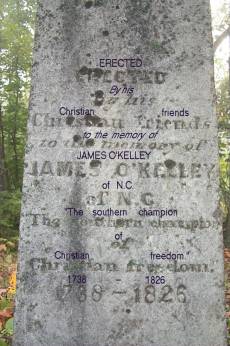 To the O'Kelly Church

Head back out of Upchurch Farm Rd. to the highway and turn right. Go .8 miles and the O'Kelly Christian Church is on the right. 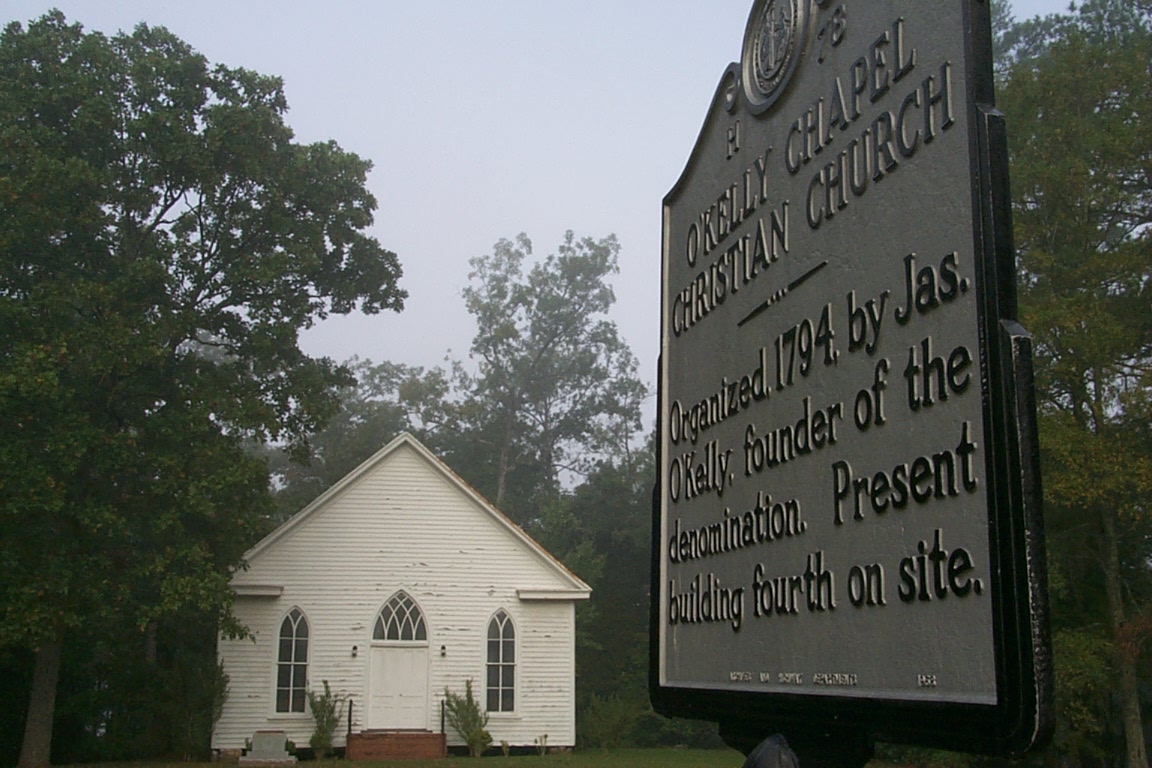 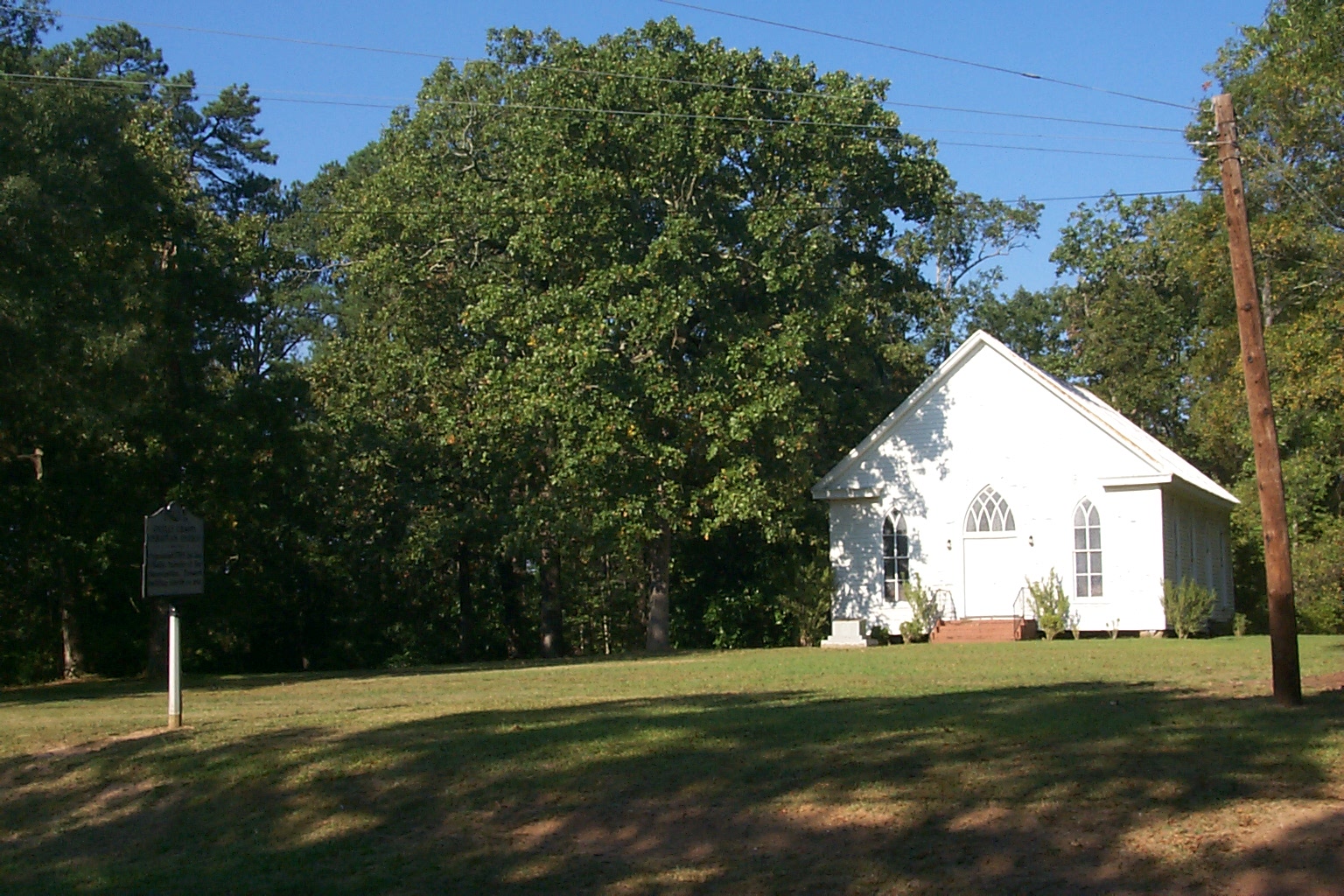 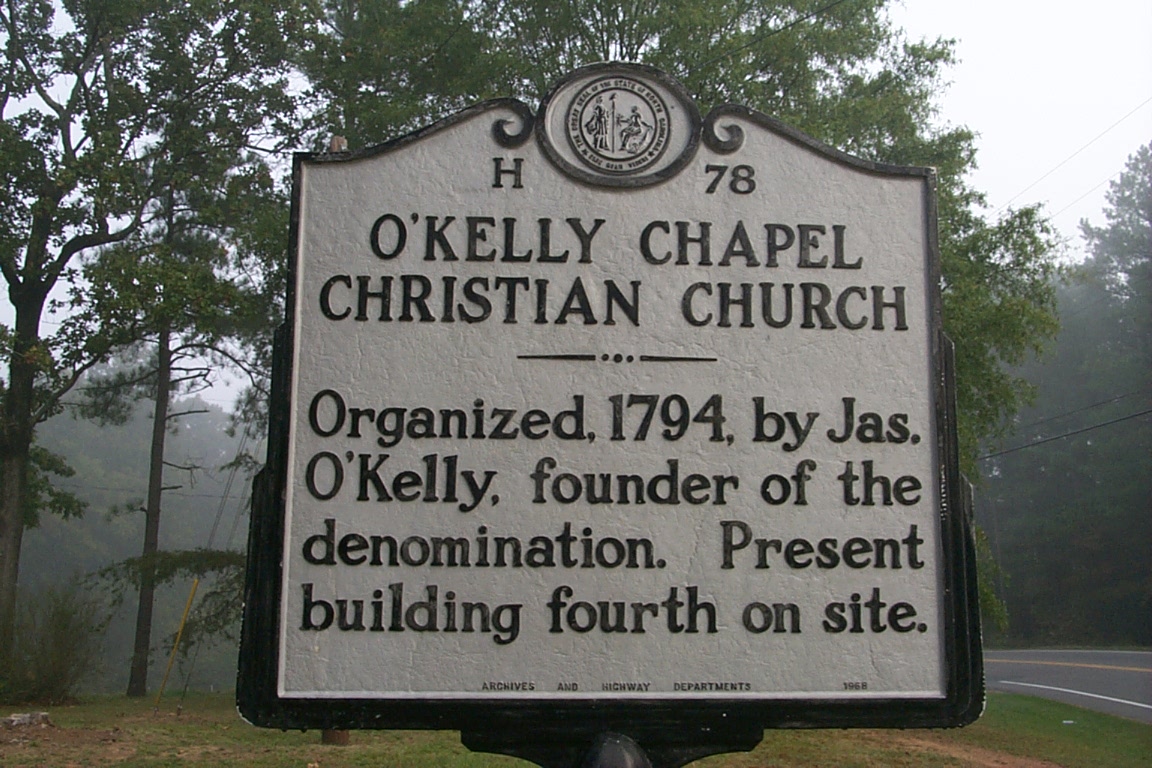 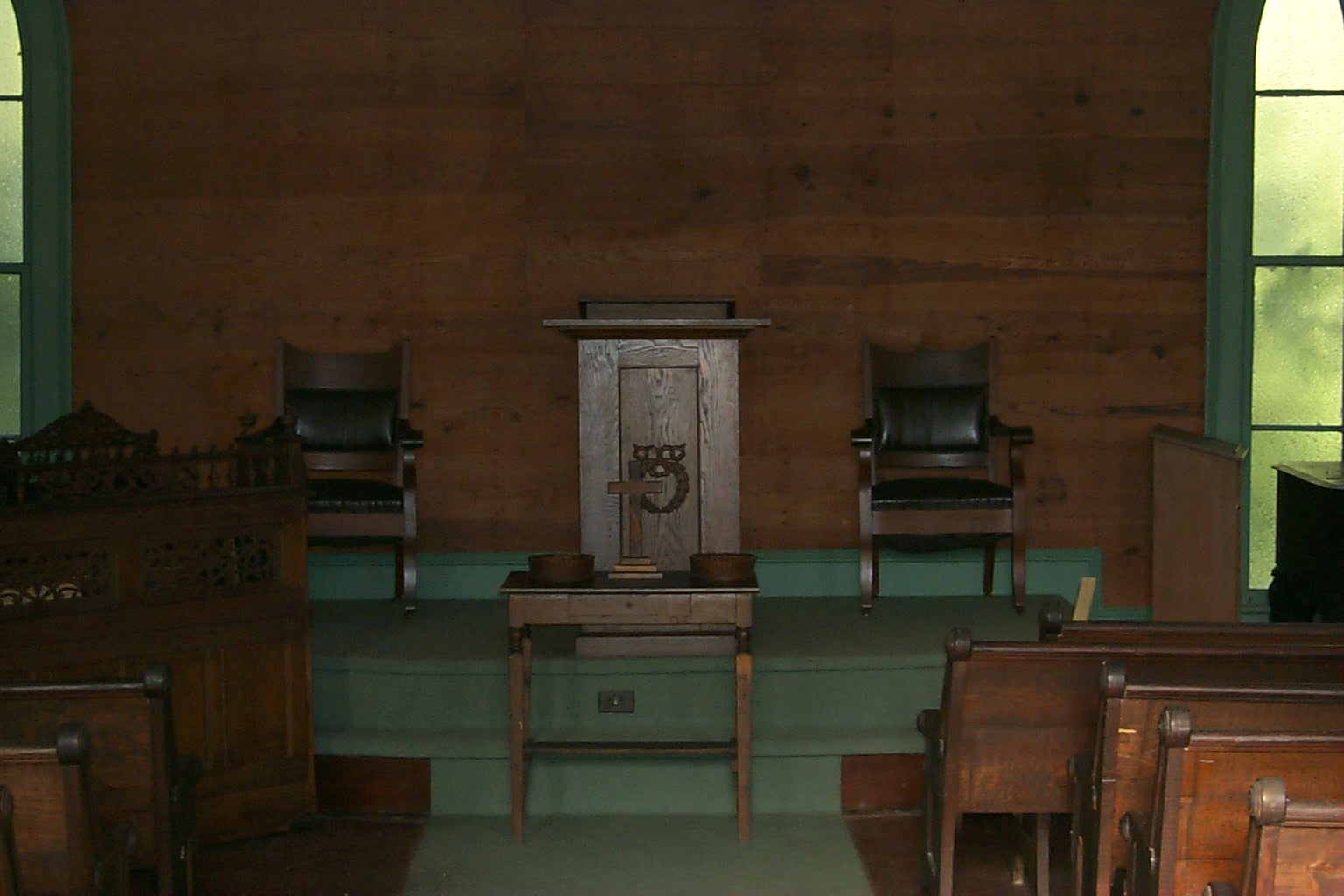 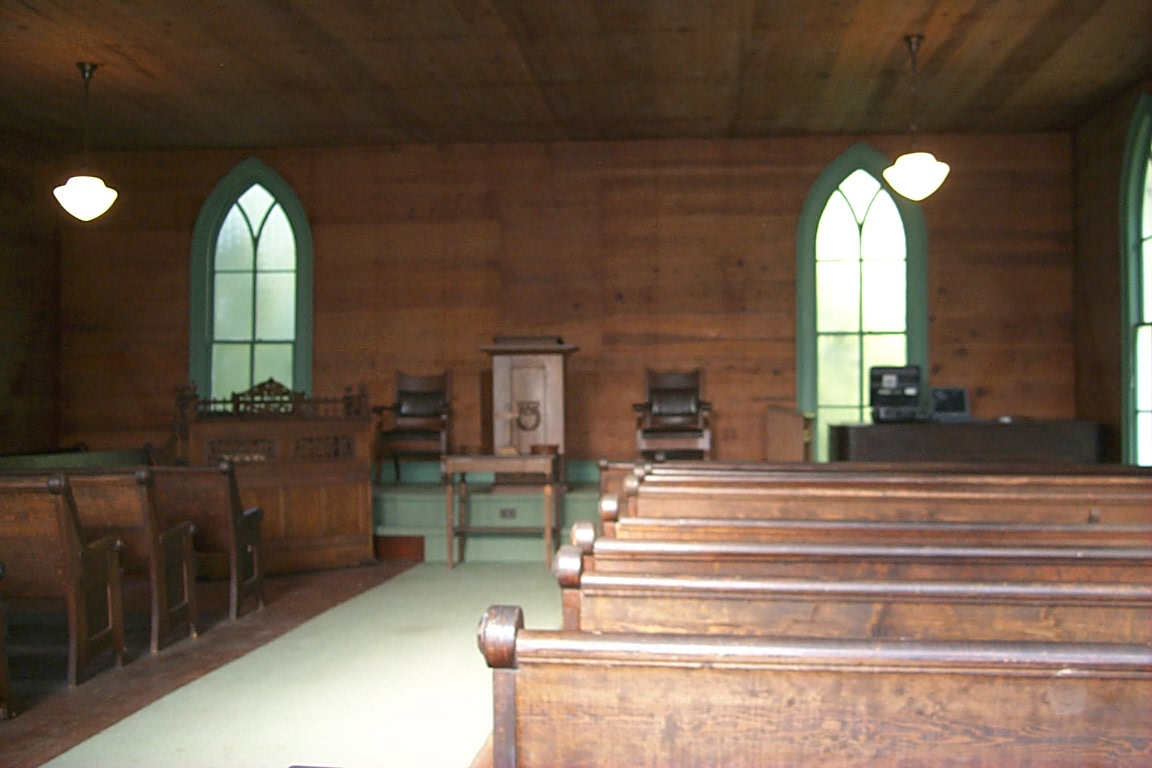 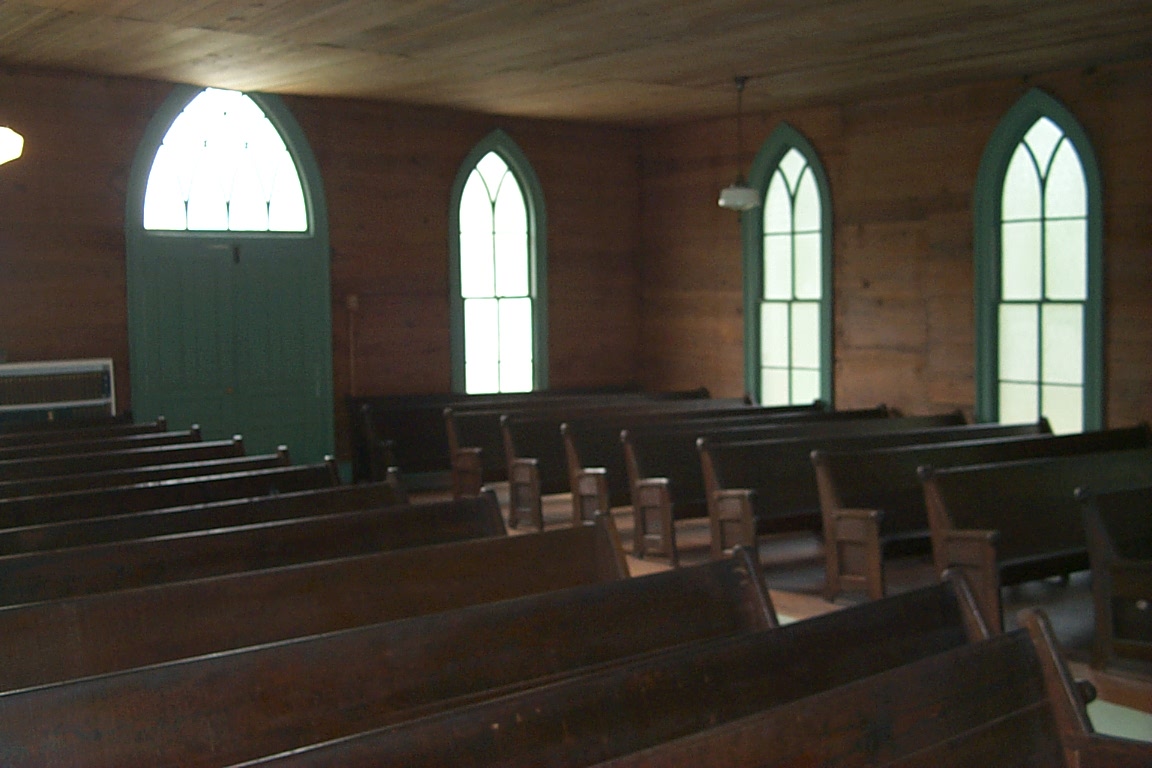 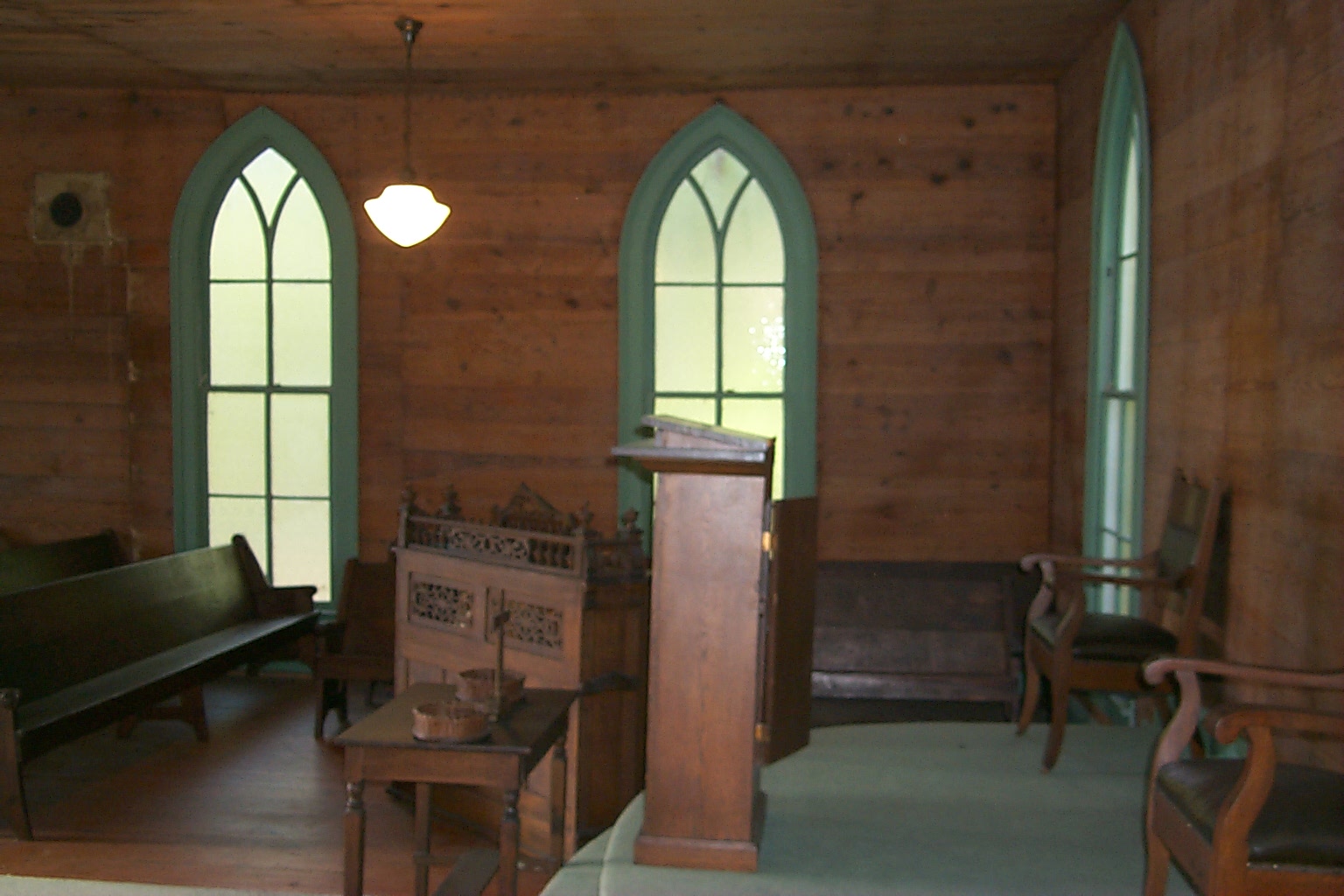 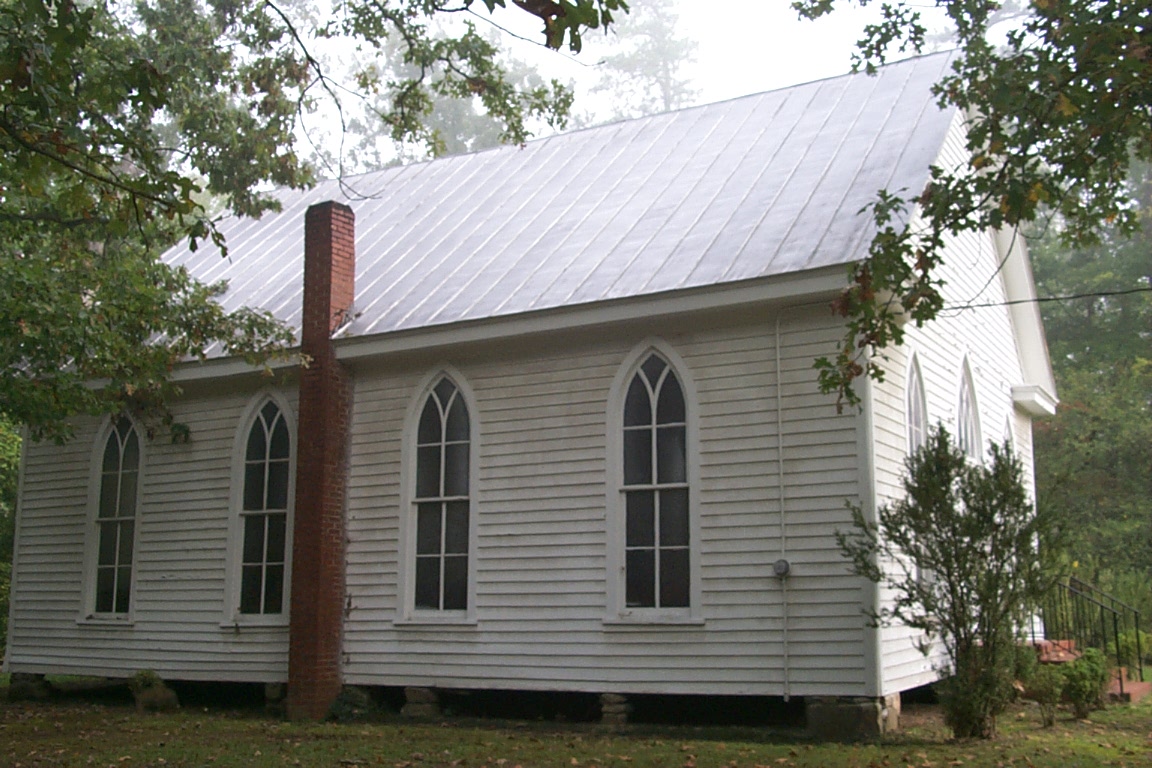 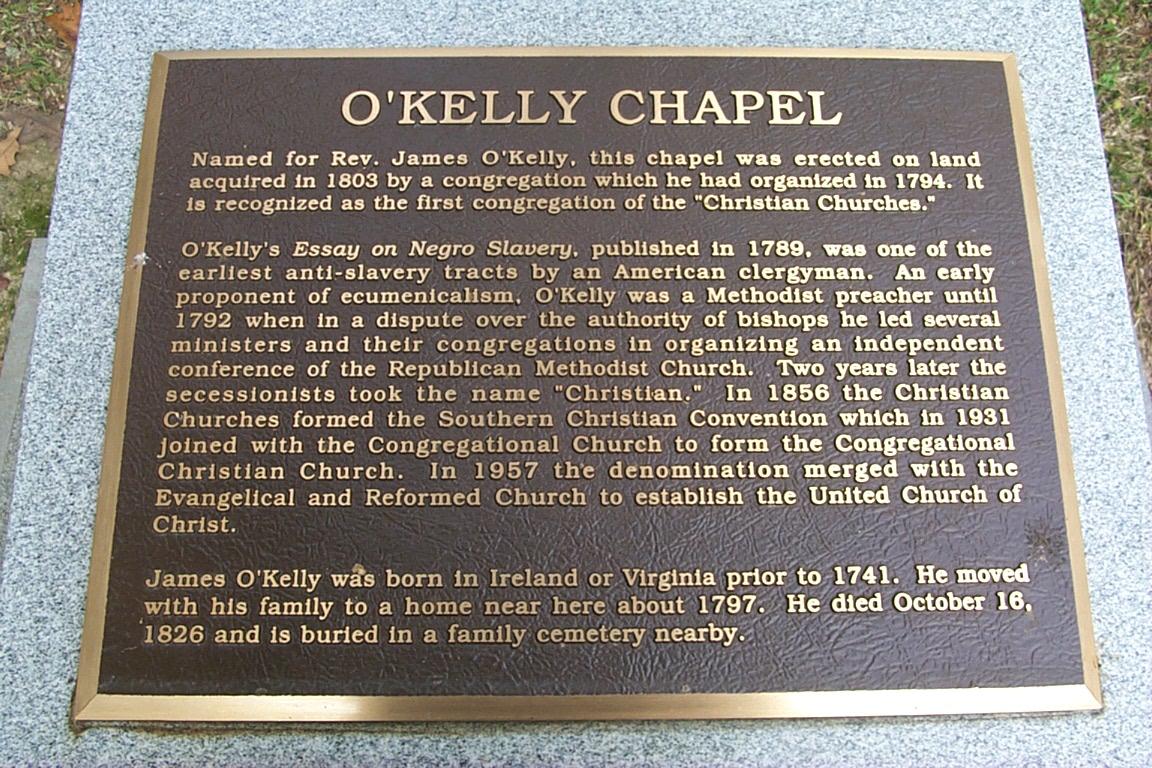 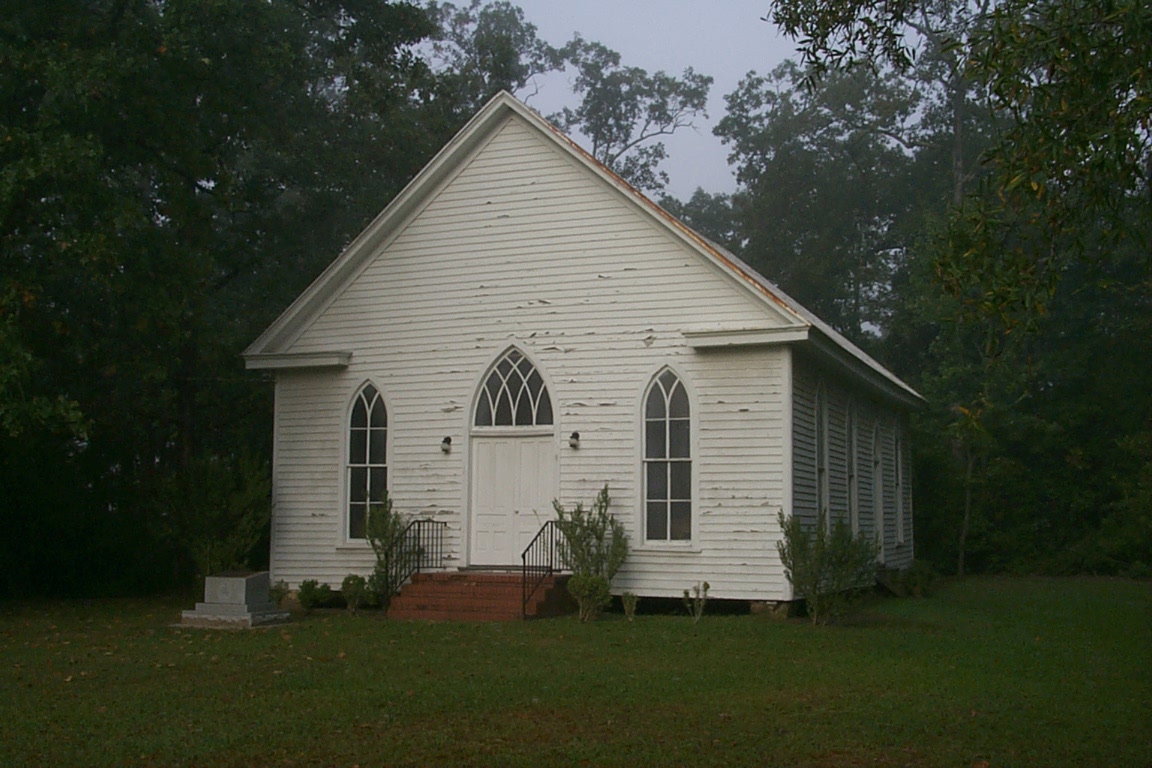 This webpage was produced in March 2001