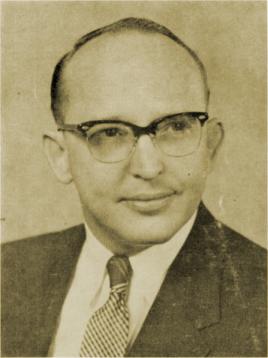 Biographical Sketch On The Life Of James O. Baird

James Oscar Baird was born in Lebanon, Tennessee, January 16, 1920. He was married to Avanelle Elliott, May 31, 1946. They had five children: Harriet; Lynne; Elisa Frances; James O. III; and Morrow Beth. He was baptized by C.L. Overturf in 1938. He began that year preaching around Wilson County, Tennessee. He received his training from: Freed-Hardeman College, Henderson, Tennessee; George Peabody College; Rutgers University, New Brunswick, New Jersey. He received the B.A., the M.A., and the Ph.D from Princeton Theological Seminary, Princeton, New Jersey. He preached for churches in the Nashville, Tennessee area during the 1940's: at Grandview Heights from 1941-1943 and at Grace Avenue from 1944-1950. He and his family moved to Kansas in 1950 where he took the work at Coffeyville for three years, living and working in the west for the remainder of his life.

He was a prolific writer. He wrote books and for many brotherhood papers such as: Gospel Advocate; Firm Foundation; and for a while served as business manager and on the editorial council of 20th Century Christian. In 1949 he wrote a biography entitled, The Life and Work of Charles Edgar Little, Bureau Of Publication, George Peabody College. Dr. Little was a long-time teacher and friend at George Peabody College.

Though a great preacher and writer, his greatest work was in the field of education. While in the Nashville area he served as Professor of Sociology at David Lipscomb College, 1944-1949. The following year he served as professor of Bible there. When the family moved to Kansas in 1950, he became Dean ofCentral Christian College in Bartlesville, Oklahoma. The campus moved to Oklahoma City, becoming known as Oklahoma Christian College. He served the college as Dean until 1954.

At that time the Bairds had been thinking of moving to Africa to do mission work. In 1937 James had made a world study tour in Europe, Egypt, Palestine, India, China, and Japan. His love for the lost and the pull of church work overseas was strong. However, when the position of president of the college was vacated by L.R. Wilson, the college's first president, the board of trustees turned to Brother Baird for leadership. He became the college's second president and served this position for the next twenty years. 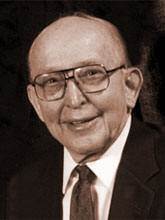 Among his many accomplishments as president, Dr. Baird led the effort to move the college from junior to senior college status and to secure accreditation from the North Central Association in Chicago. He raised millions of dollars to build the new campus in Oklahoma City and retained Caudill-Rowlett-Scott to design a master land-use plan before construction got underway. He and Dr. Stafford North were at the forefront of instructional technology when they pioneered Oklahoma Christian's famous Mabee Learning Center in 1965.

Some unexpected health concerns prompted Dr. Baird to step out of the presidency in 1974, at which time he became chancellor. He was a mentor to the new president, Dr. J. Terry Johnson, and continued to raise support from long-time friends of the college. In 1981, he became publisher of the Christian Chronicle, a newspaper for members of the churches of Christ. The circulation of the paper grew from 3,600 to more than 100,000 and brought great recognition to Oklahoma Christian from its church constituency. Dr. Baird suffered a debilitating stroke in 1990 and died in February 1998.

Location of the Grave

James O. Baird is buried in the Memorial Park Cemetery in Oklahoma City, Oklahoma. The cemetery is located at 13400 N. Kelly, Oklahoma City, OK 73131-1295. Contact the office at 405-478-0556. Take I-235 through the center of the city heading north. After crossing I-44 the road becomes Hwy 77. It is best to get off Hwy. 77 at the E. Hefner Exit and head east. Turn left on N. Kelly Avenue. Just after you pass under the John Kilpatrick Turnpike you will see the cemetery on the right. Enter the cemetery from North Kelly Avenue in front of the offices. Go around to the back of the offices and take the center road (Memorial Way) behind the offices straight to the back of the cemetery just before the Mausoleum. Stop the car before the Mausoleum and look to your right. This is Section 47. Baird is buried not far from the North East Corner of the section in Lot 70, Space 3. The GPS Location of the grave is: N35° 36' 320" x WO 97° 29' 335" / or D.d. 35.605394,-97.488931.

While in the cemetery be sure to visit the graves of other preachers of the past: J.H. Lawson, Doug Lawyer, and William D. Bills. 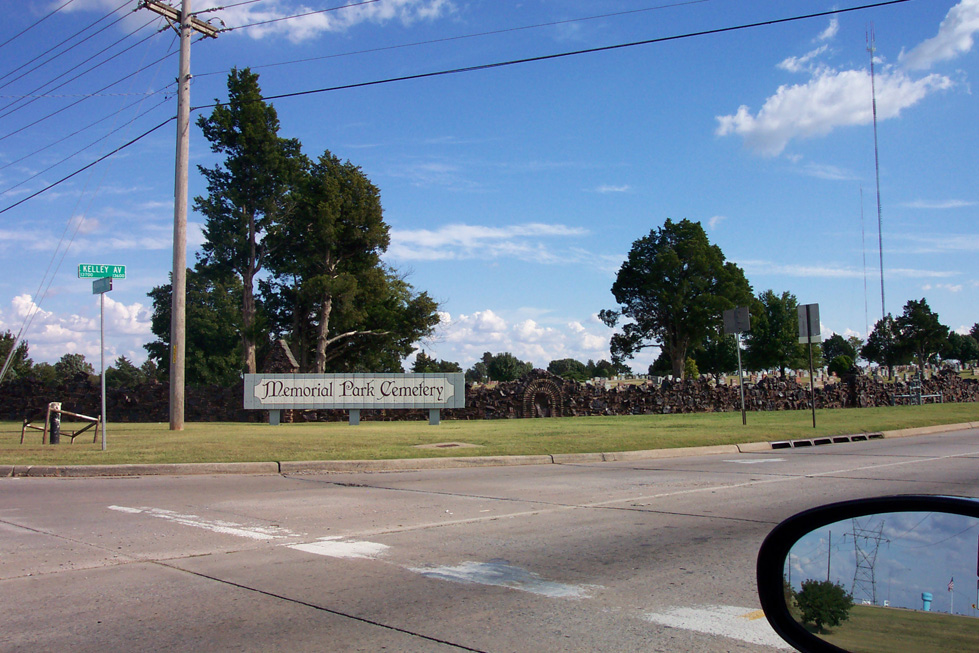 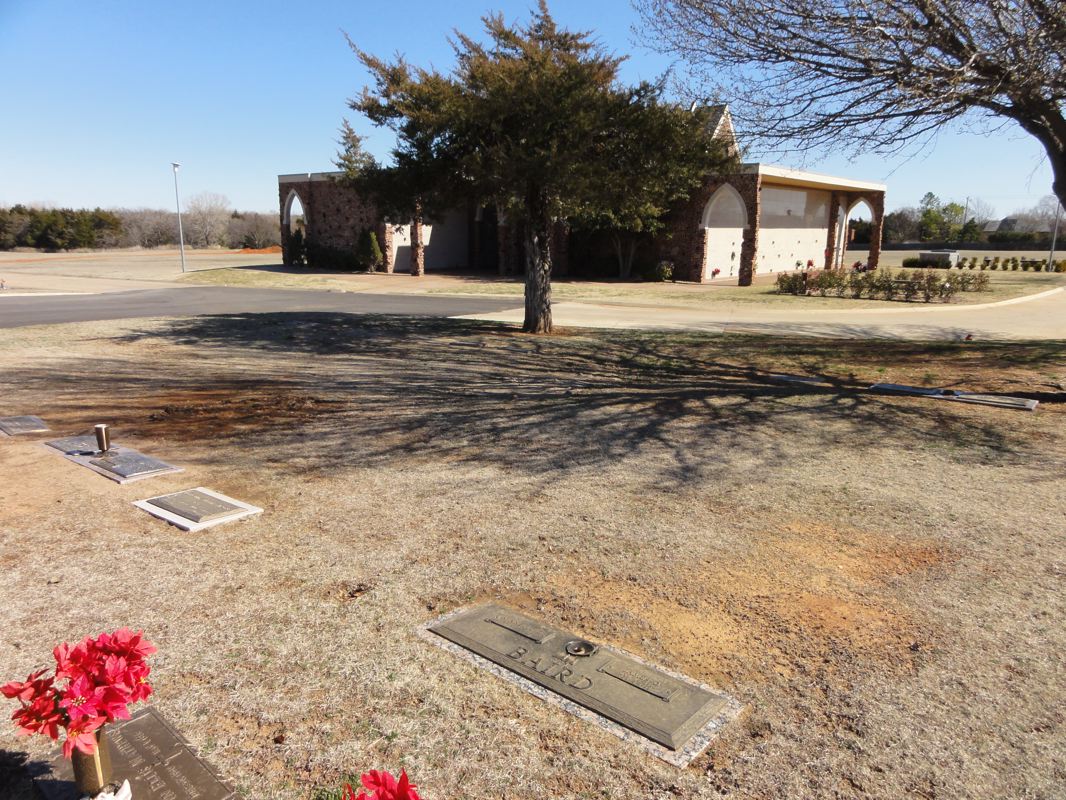 Mausoleum In The Background, Baird Plot In The Foreground 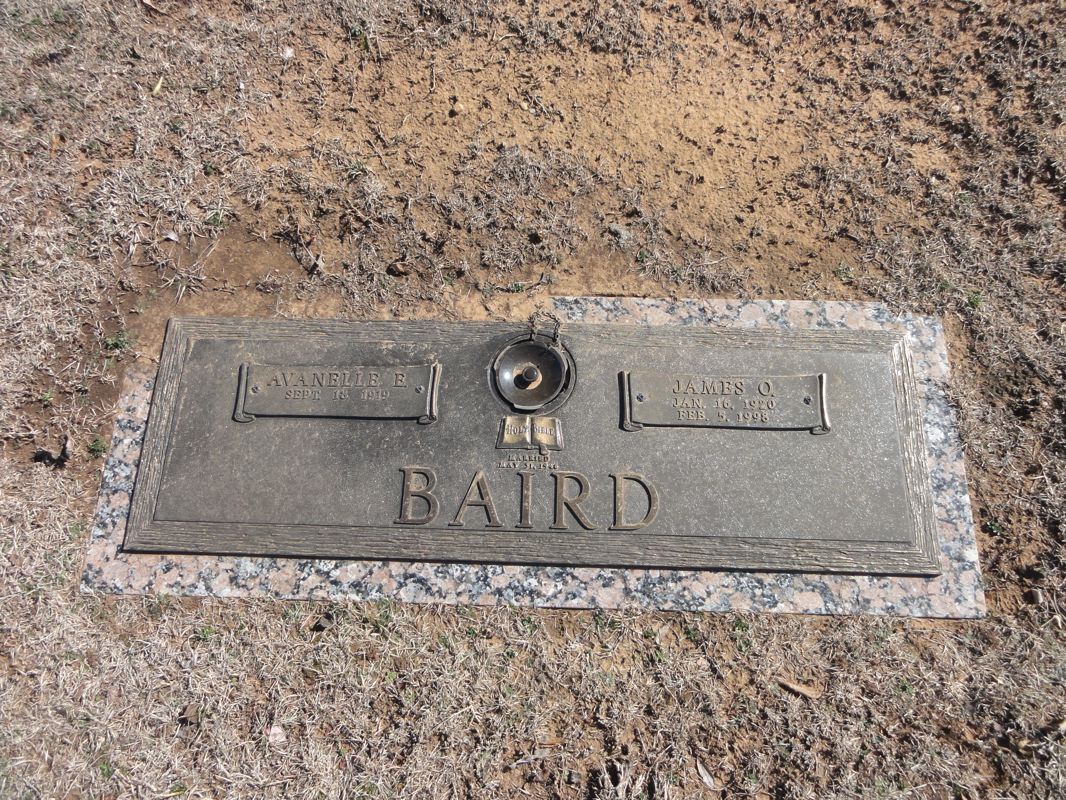 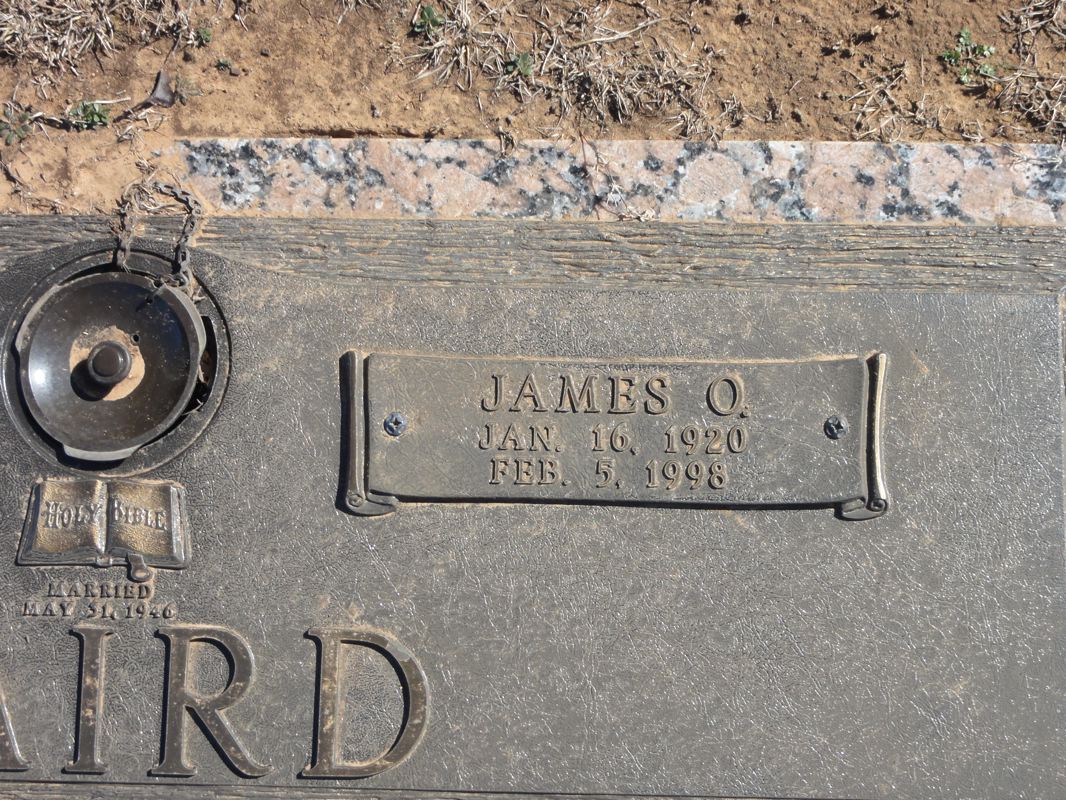