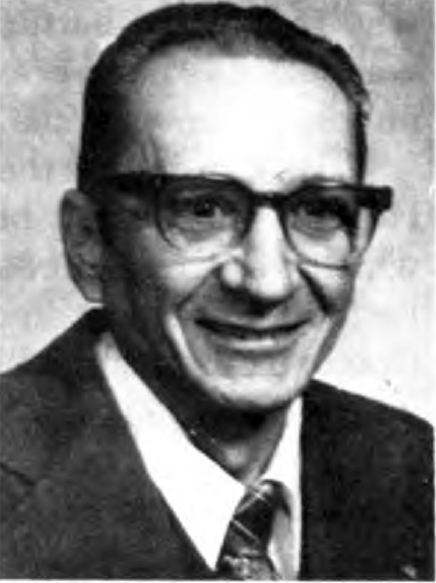 The Life of Adrian Cole

Adrian Cole was among the first students to enroll in Central Christian College, the forerunner of present-day Oklahoma Christian College. Physically, he was a small man, but his desire to serve his Master was not “small”. He was a victim of poor health through out life, and this made it harder for him to do the things he wanted to do. In school he did his work well, fitted into the programs and purposes of the school, and was, in every respect, a good student. Central Christian was a Junior College at that time, and he did two years of work there.

He was born in the Galey community east of Stratford, Oklahoma on August 27, 1932 to George and Irene Cole. His father worked in the oil fields for the Mobil Oil Company and was active in church work. Some where along the line he began to preach, and continues in that work to the present, though he has retired from Mobil. In addition to Adrian, the Coles had a daughter. The first church service Adrian attended was when he was only one week old. The family moved from Galey to Maud, Oklahoma, then to Hays, Kansas, and then to Shawnee, Oklahoma. Adrian did his grade school work in Maud and Hays and completed his high school work in Shawnee. The family influence was strongly religious, and no doubt he decided early in life that he wanted to be a gospel preacher. J.T. Marlin, a great gospel preacher, came to work with The Church in Shawnee, and his influence helped Adrian actually enter into that work. He preached his first sermon in 1950 at Earlsboro, Oklahoma.

On March 29, 1953 he was married to Miss Nora Lou Hughes, daughter of Roy and Ruby Hughes who lived in the Ray City community between Maud and Konawa, Oklahoma. They too werefaithful Christians. Frank L. Smith, of Shawnee, performed the marriage ceremony for them. Two sons were born to them, Roy and David. David died at the age of sixteen in 1977, a victim of an hereditary immune deficiency, the same as his father. The Coles also had a foster daughter, Cathy McAllister, who came to live with them in 1979, and she is still with Sister Cole. David also had a desire to preach the gospel, and loved to visit the sick and aged. He had made several talks before his death.


While in school in Bartlesville (Central Christian) Adrian preached in several small places nearby, as most “preacher boys” do. After he completed his school work he preached in Anderson, Oklahoma and Lewiston, Montana where he did secular work to support his family. His first “full time work” was in Harden, Oklahoma, then to Roosevelt, Boise City also in Oklahoma. He moved to Minneola, Kansas, and here he had a debate with the Seventh Day Adventists. Eudora, Kansas was next, but due to health problems He only stayed there about nine months when he moved to Raton, New Mexico, seeking a different climate because of his health. After Raton he worked in Truth or Consequences, N.M., then back to Texas with The Church in Higgins, where he worked from 1967 to 1972. Ames, Elgin, Snyder, and Grandfield, all in Oklahoma, followed. In 1981 he moved to Drumright, Oklahoma where he worked with the Broadway church until the end of his life. He held meetings from time to time and did radio in several of the different places in which he lived.


The immune deficiency, which he inherited, plagued him all his life, but became worse in Drumright, so he was often subject to severe infections. His blood marrow stopped producing blood, and transfusions became necessary for the last year and a half. He was sent to the National Institute of Health in Bethesda, Maryland where research programs tried to help him. He never lost his determination to preach, and as the end neared was often in the pulpit when he was physically unable to be there. His wife said he kept going when many men would have given up. Actually, he “kept going” until about two months before the end on January 8 of this year. (1985) He died in the Presbyterian Hospital in Oklahoma City. Services were conducted by two long-time friends and faithful gospel preachers of Oklahoma, J.T. Marlin and Mack Lyon in the meeting house in Drumright. His body that suffered so much now sleeps in the Little cemetery north of Seminole, Oklahoma. His companion continues in good health, and plans to continue to live in Drumright. She spoke of the wonderful help the Drumright brethren were and are in her trials. No doubt she would enjoy a note from those of you who knew them as they did the work of The Lord in different places across the years. Her address is Box No. 144 Drumright, Oklahoma 74030.


There is something inspiring about such men as Adrian Cole. Throughout life he had a disease that he knew would take him away, yet he never gave up, and lived a very useful life, productive of much good. We pray God’s blessings upon his memory and his loved ones. According to the “good book”, the redeemed will meet again where there is no sickness, pain, nor sorrow. What a blessed thought!

-Loyd L. Smith, Gospel Preachers of Yesteryear, 108-110. First appeared in the pages of The Christian Worker, March, 1985
Note: This is a timed piece. Some of those enlisted as living may be now deceased.

Directions To The Grave of Adrian U. Cole

Adrian and Nora Lou are buried in the Little Cemetery north of Seminole and east of Oklahoma City. From Oklahoma City head east on I-40 and go to Exit 200/Hwy.377&99, and go south toward Seminole. Go about two mile and the cemetery will be on the left. The grave is very easy to find. Go to the office at the front of the cemetery on the south end. the door into the office faces the cemetery. From the right end of the porch, head straight into the cemetery about three rows, and you will come to the Cole monument. Plot Info: Section 12, Row 12. 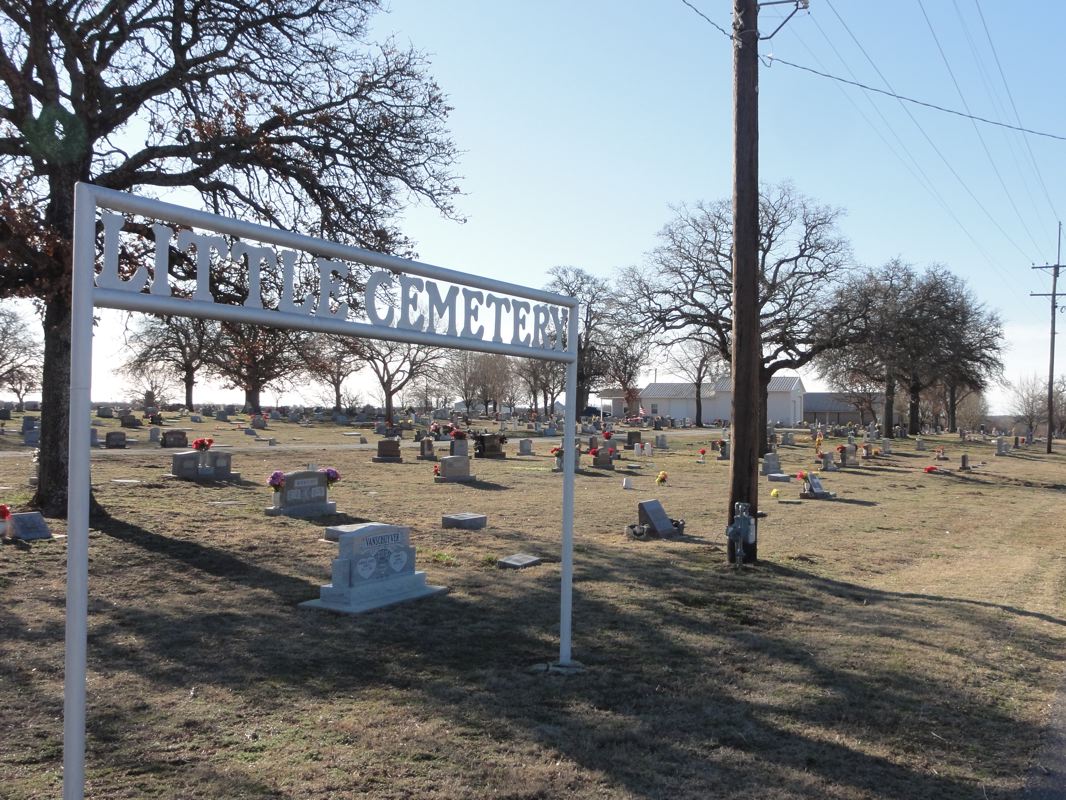 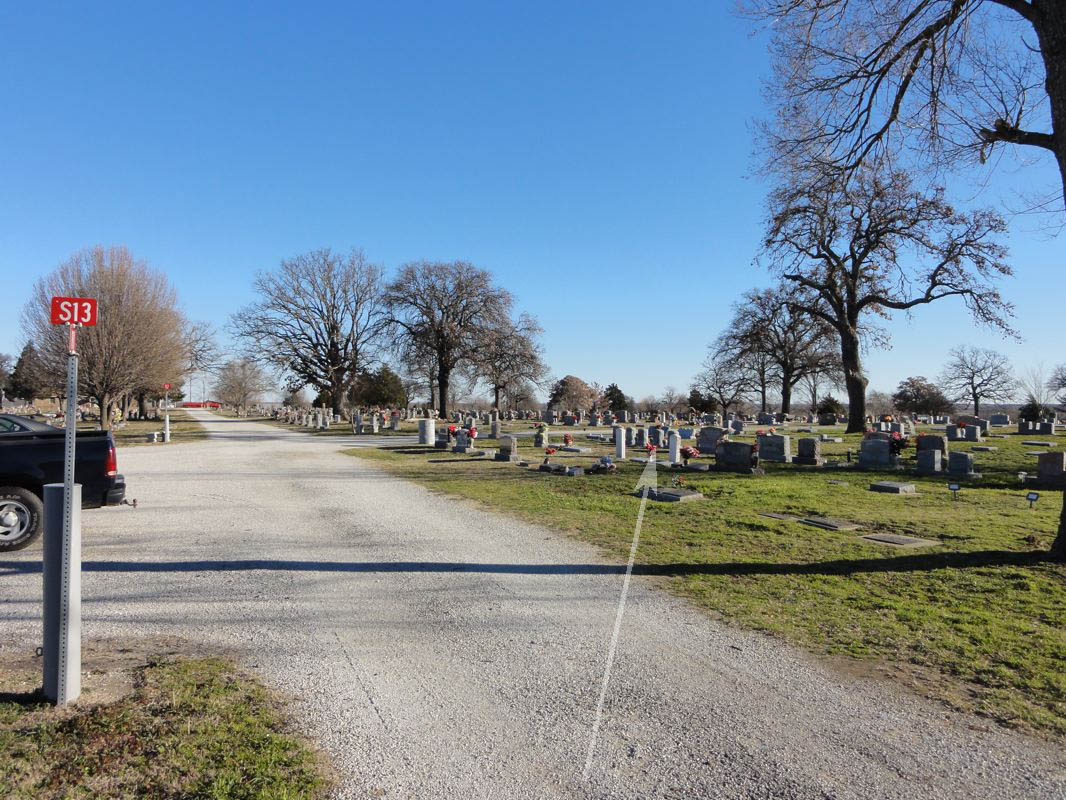 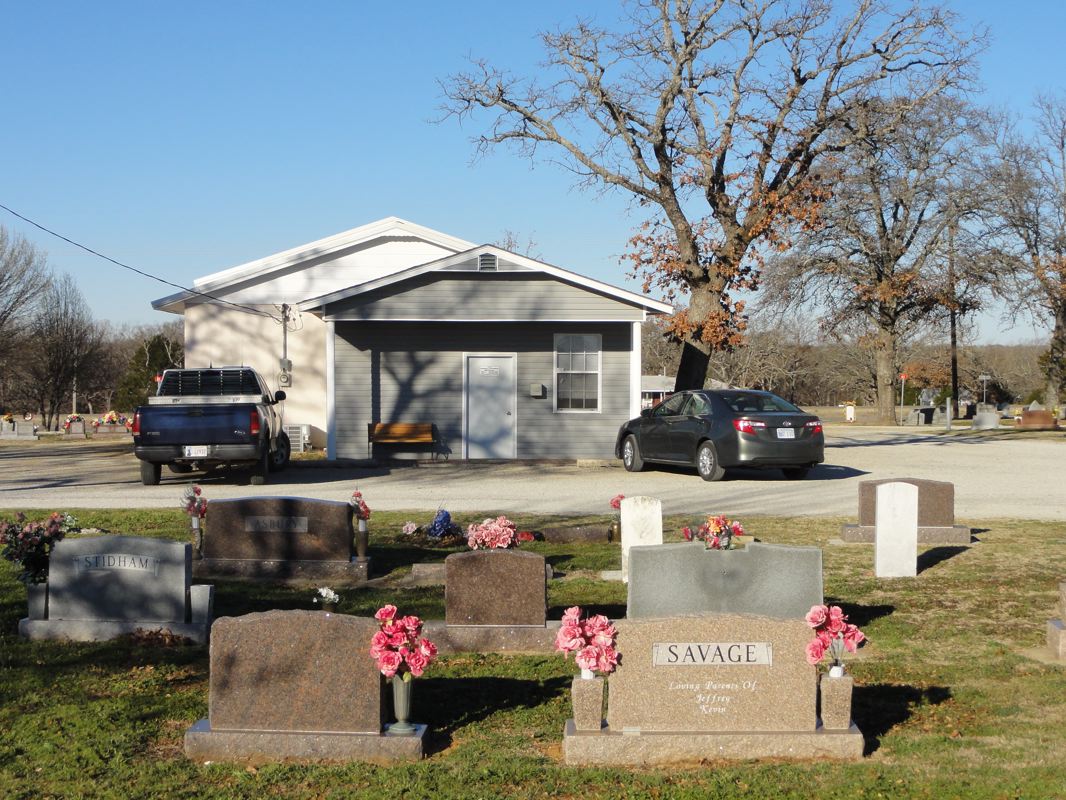 Grey Marker on right - Easy to find near the office 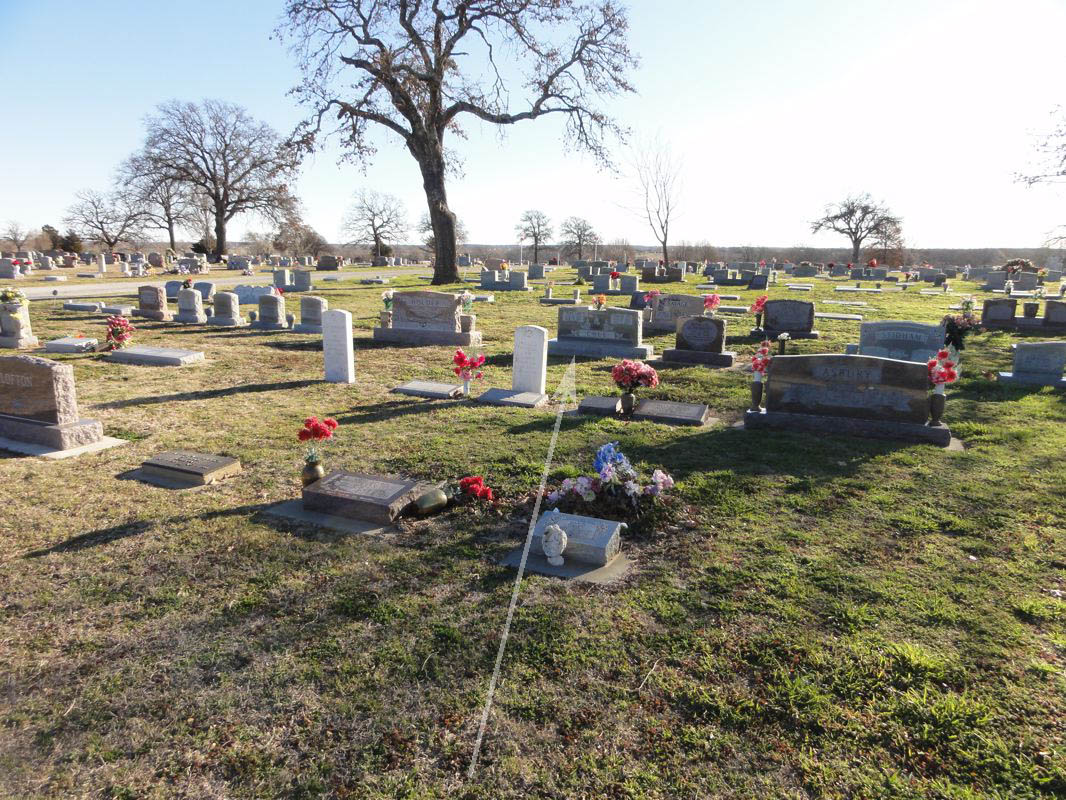 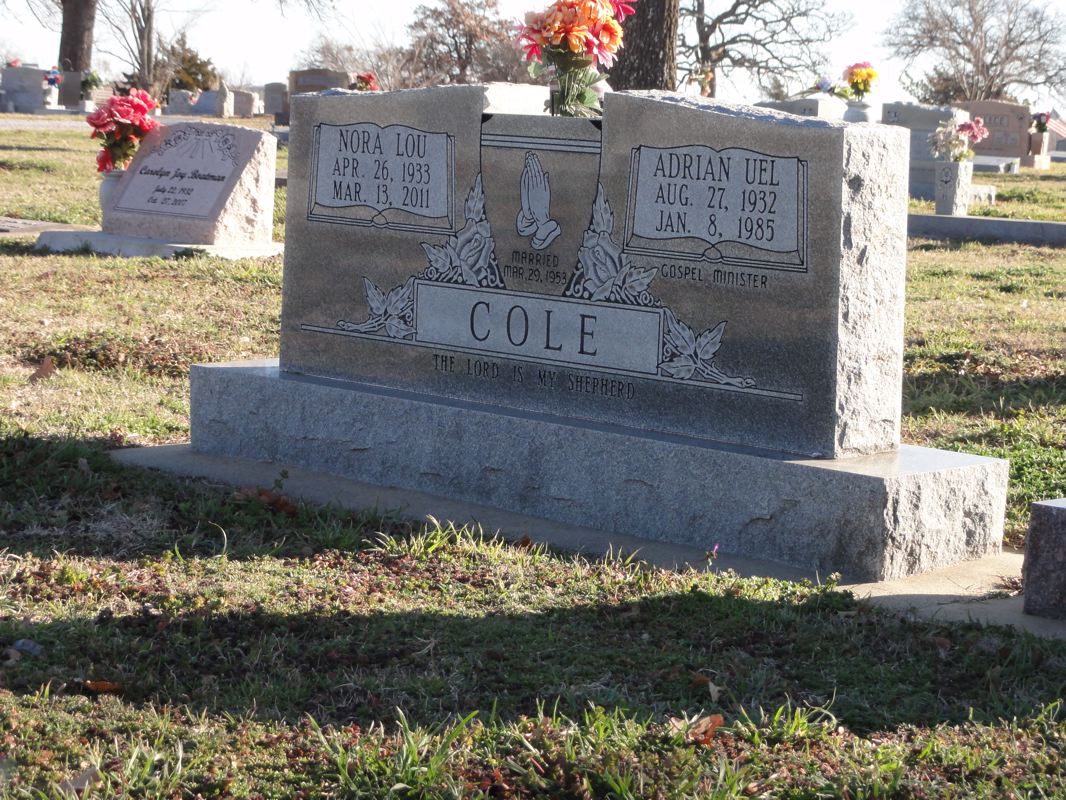 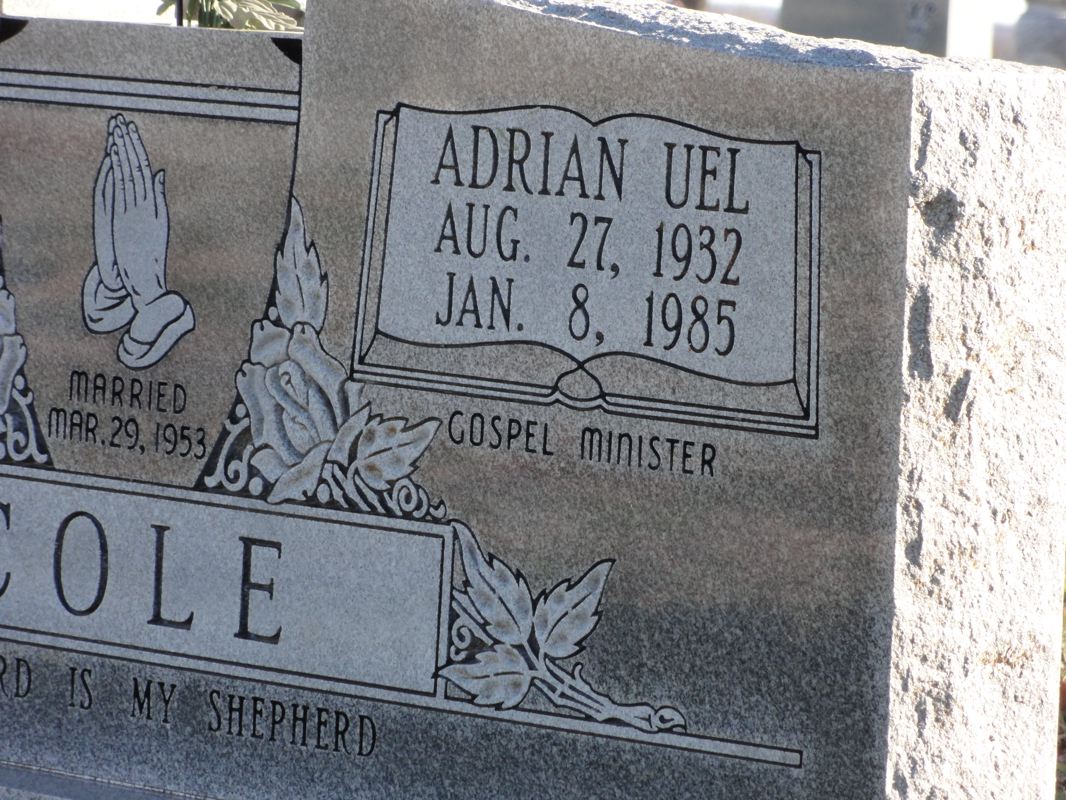 Web editor note: In February, 2012, it was my privilege to visit the grave of Adrian Cole. I was invited to take part in the annual Affirming The Faith Lectureship in Oklahoma City, Oklahoma. Getting into the area early, I was afforded the opportunity to put about 2000 miles on a rental car in order to locate graves of gospel preachers and church leaders of yesteryear in a wide area. My fifth day I was able to visit the grave of Adrian Cole.