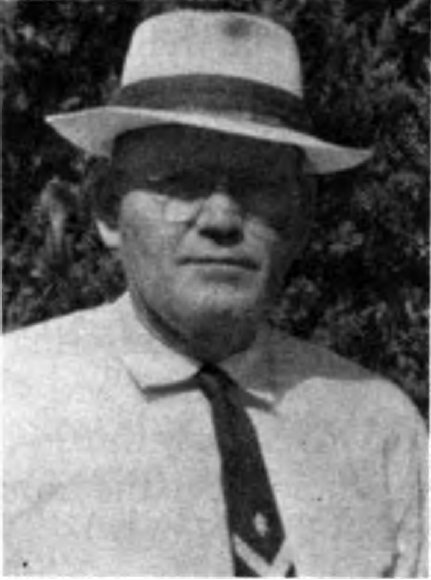 The Life of Clyde Hoy

Clyde Hoy, of Carter, Oklahoma, was a very unusual man. His formal education was limited, but when he decided to be a gospel preacher he knew he would have to know The Book if he was to preach it. Before his marriage, while living alone and supporting himself by farm labor, he spent long, long days in serious study of The Book. He memorized vast portions of it, and could easily and quickly tell one where to find almost any passage. Also, his analytical mind made it possible for him to arrange scriptures for use in a lesson, and if asked to give the passages to be used on almost any subject, he could quickly do it. He came to know The Book as few men have known it. Among the preachers that knew him he was highly respected for this knowledge of the Bible. He had complete confidence in God’s Word, and always built his lessons upon it. He always encouraged young preachers to study it, telling them they could not preach it if they didn’t know it. He remained a serious student of it to the end of his life. Though limited in formal education, he certainly was not limited in what really counts. Most of his life was spent in the area where he grew up, and he was held in the very highest esteem by people of all classes. Some of his best friends were some of the best educated people in the community, for they were able to evaluate his true worth.

Brother Hoy was born September 8, 1900 of John Q. and Augusta White Hoy at Prairieville, Texas. His father was a farmer, and when Clyde was a small boy he moved his family to Terral, Oklahoma, where they stayed for a few months. From Terral they went by train to Lone Wolf in Southwestern Oklahoma. Here they were met by friends from Beckham County who took them back to Beckham County in a wagon, a journey of perhaps forty miles. They were able to rent a good farm in the Taylor community south of Elk City. A country school was conducted close by and one of the first congregations of our people was meeting where the Taylor church still meets. Clyde and his two brothers went to school and worked on the farm. On July 31, 1916 their father was struck by lightning and died on August second. This happened a very short distance from the Porch cemetery, where the father was buried, and about three or four miles south of Taylor church. One of his brothers, Lee, lives in Dallas and is a faithful member of the Garland Road church (1981). He once served as an elder in the Highland Park church.

Brother Hoy attended grade school at Taylor, and sometime in early life obeyed the gospel, probably at Taylor. However, he did not remain faithful, and in 1933 with the lamented Joe Coppinger, I held a meeting at Taylor. Among those responding to the gospel invitation was Clyde Hoy, now a strong, striking young man in his early thirties. He must have resolved at this time to give his whole life to the Lord, for soon he was making talks, continued to support himself by farm labor, but his preaching increased at Taylor and in many of the nearby places.

In 1936 he was married to Miss Mattie Utley by W. T. Vaughn of Cordell, Oklahoma. Mattie had also been reared in the Taylor community, being the daughter of Linley and Ida Utley, pioneer settlers in the Taylor community. The Utleys had come from Illinois and were able to find a “claim” on which they could file a homestead in 1898. Brother Utley was a very useful man in the Church, often preaching, baptized people, conducted funerals and marriage services. He had a brother, Lewis, who preceded him to Oklahoma, but was living in Greer County. He moved to the Taylor community and with “Uncle Alf” Taylor and others, established the Taylor church. Lewis Utley moved away, and was the father of a family of preachers, but Linley stayed and with his family was a “pillar” in the Taylor church as long as he lived. Mattie was well prepared to walk by the side of a gospel preacher, and did so as long as Clyde lived.

In the early years of their married life they lived for a few years in Dallas, where Clyde worked with his brother, Lee, and preached on Sunday. For a time he lived in Grapevine and worked with that church, and at other times he had Sunday appointments, many of them down in East Texas. Finally they moved back to Carter, bought a home, and spent the rest of their life there. Carter was the town closest the Taylor community, which was “home” to each of them. He preached for many years for the Carter church, Taylor, Burns Flat, Willow, Dill City, Brinkman, Lake Creek, East View, and possibly others. He conducted many meetings, and a few debates. He came to have great influence for good among those who knew him, performing many weddings, conducting many funerals, and in general serving the community as only a faithful and dedicated preacher can. He was a large man, physically, and had a voice and personality to match that large frame. He was a good speaker, and a very careful student of the Bible. We do not have the details of his debates, but there were several of them. His complete confidence in the Book made him unafraid of any opponent. I remember a debate in which I moderated for him. It must have been his first one, and he handled it quite well. He did some writing, but we now have no record of any of it. For many years he added to his income by doing farm labor, but in later life developed a heart condition that limited his physical activity, even to his preaching. In the forties or fifties he “took up” photography, and became quite proficient in that. Not only did this provide a recreational outlet for him, it
also added some to his income.

In the last years, though afflicted by the heart ailment, he continued to teach all he could, making calls on the sick and other needy, and often made tape recordings of his lessons that were often taken to shut-ins with good results. He was always interested in young people, helping them all he could, and always encouraging them to learn the Book. At the end he was doing some special study with a young preacher who was a student in Oklahoma Christian College.

Finally, the last heart attack came. He was taken to the Community Hospital in Elk City, and there the Lord called him home on August 2, 1966, exactly fifty years from the day his father died. His body sleeps in the Porch cemetery with others of his family to await the Sounding of the Trumpet. He was a good man, a good preacher, a good Bible student, and he lived what he preached. One can hardly do better than that! There’ll be a better day for “the likes of Clyde Hoy”.

Mattie lived for a few years after Clyde’s death, living most of that time in a nursing home in nearby Sayre. She was in poor health most of the time, but she has now joined Clyde in the “better land.” They never had any children. They were good people, and profitable servants of The Lord.

Loyd L. Smith, Gospel Preachers of Yesteryear, pages 181-183, First Published In The Christian Worker, May, 1981. Note: This is a timed piece. Some of those enlisted as living may be now deceased.

Directions To The Grave of Clyde Hoy

Clyde Hoy is buried in the Poarch Cemetery a few miles south of Elk City, Oklahoma. From Elk City take Main Street south, past I-40. The road will be Hwy 6. Go 13.5 miles and turn right on N2010 Rd. The road will wind around and you cannot miss the cemetery on the right. Pull up to the main gate. Upon entrance, turn left and follow the fence row nearly to the corner. Just before the end of the fence the Hoy plot will be on your right. 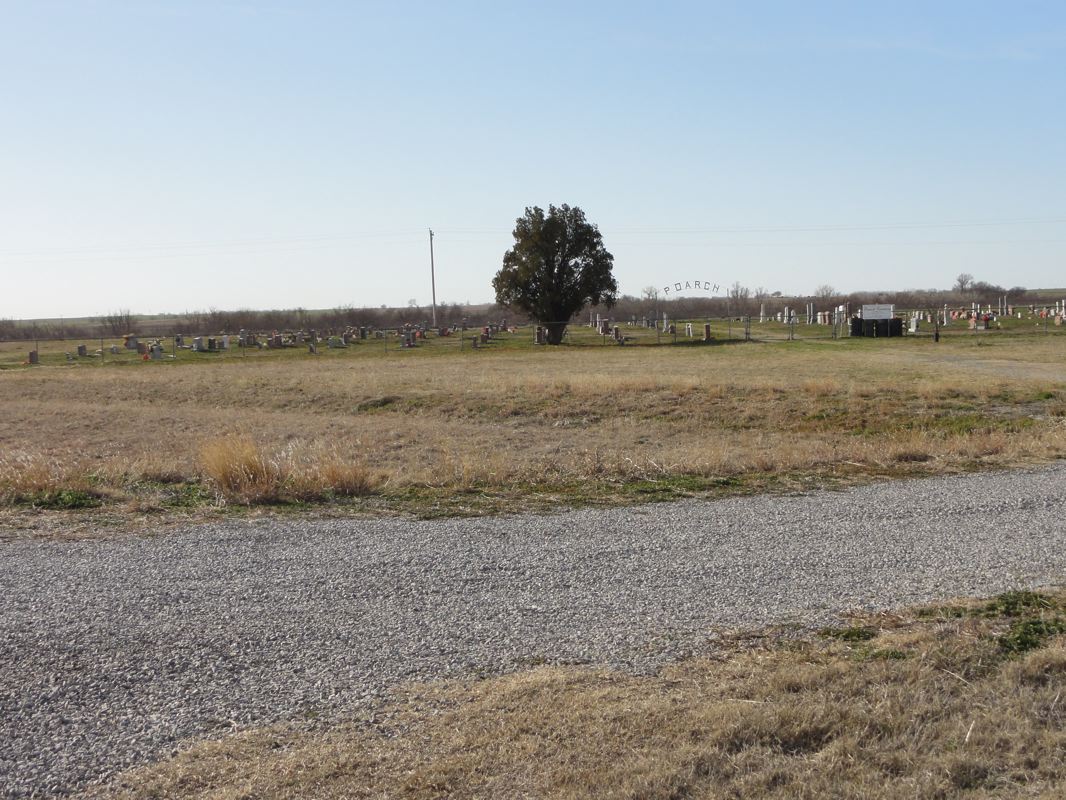 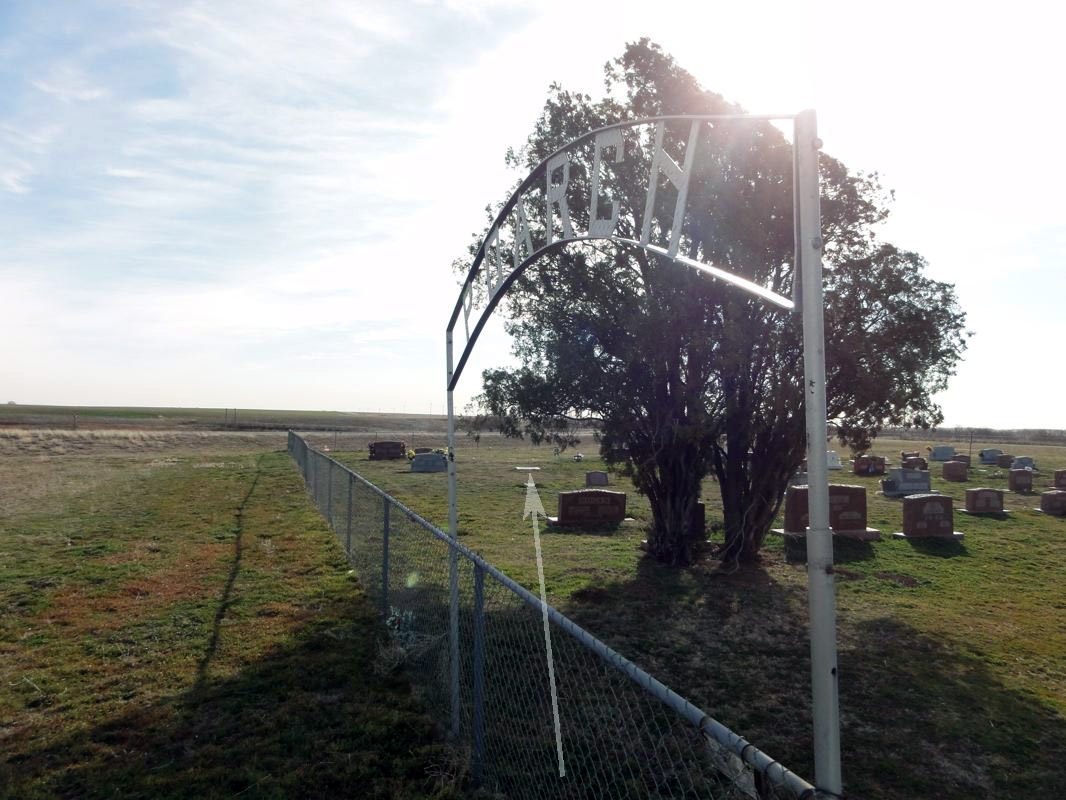 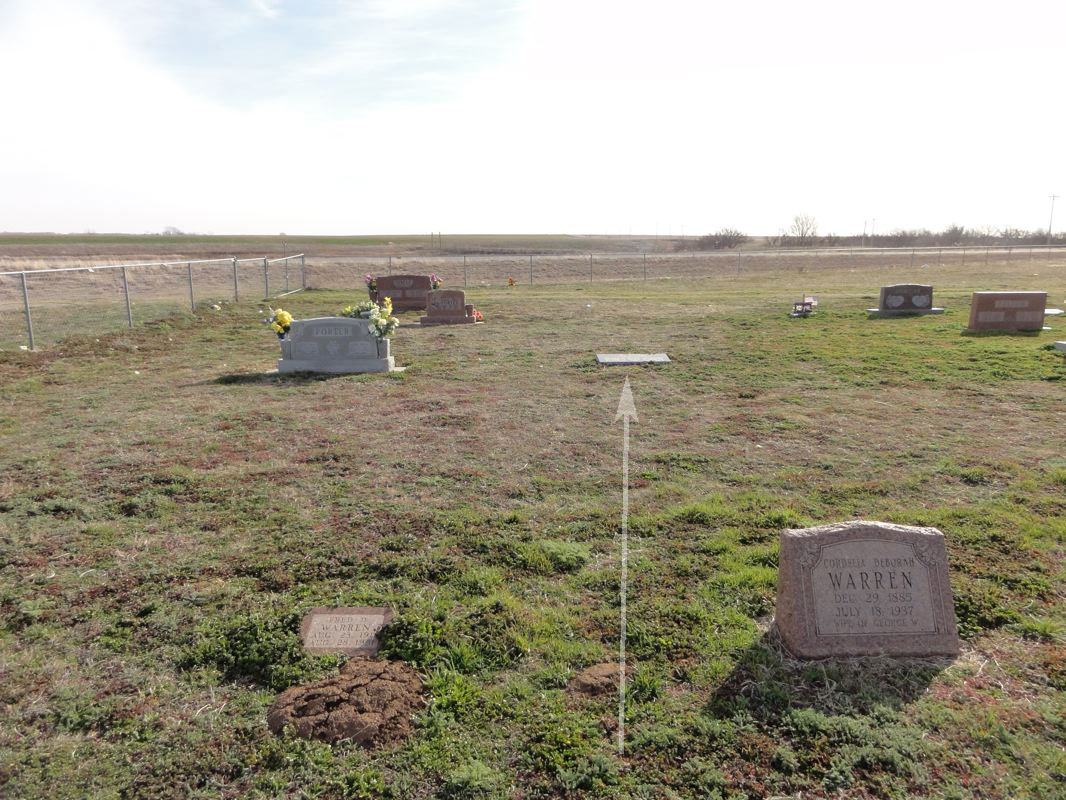 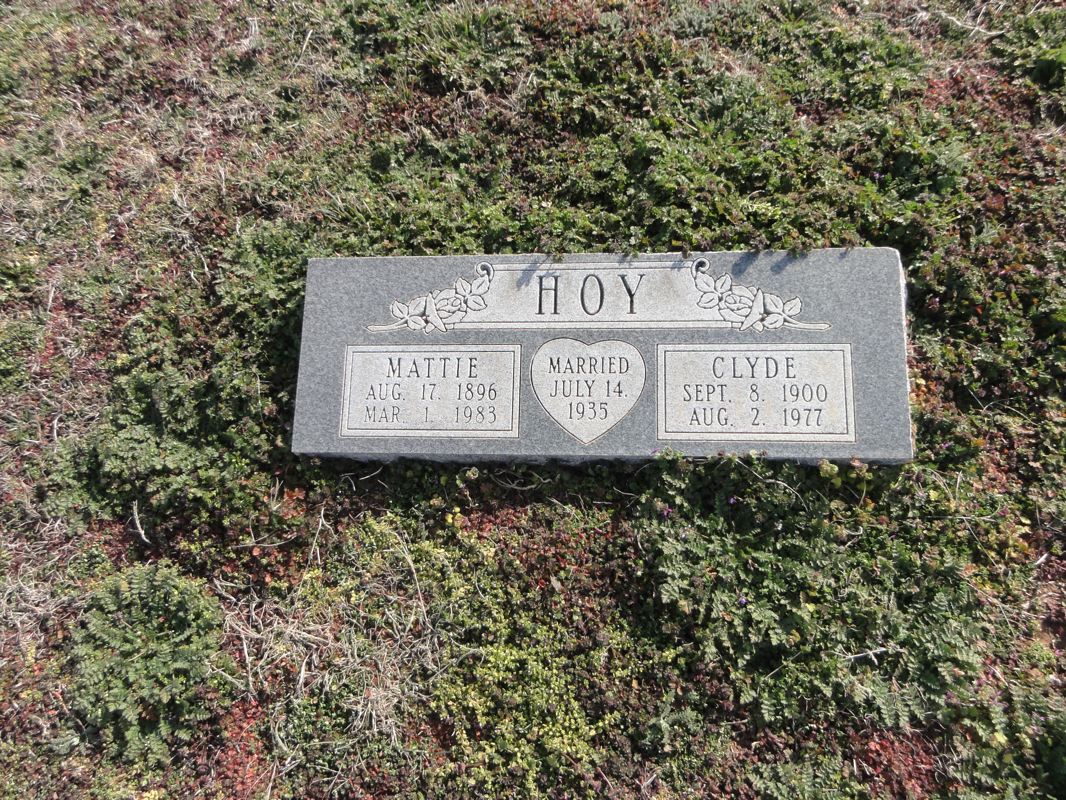 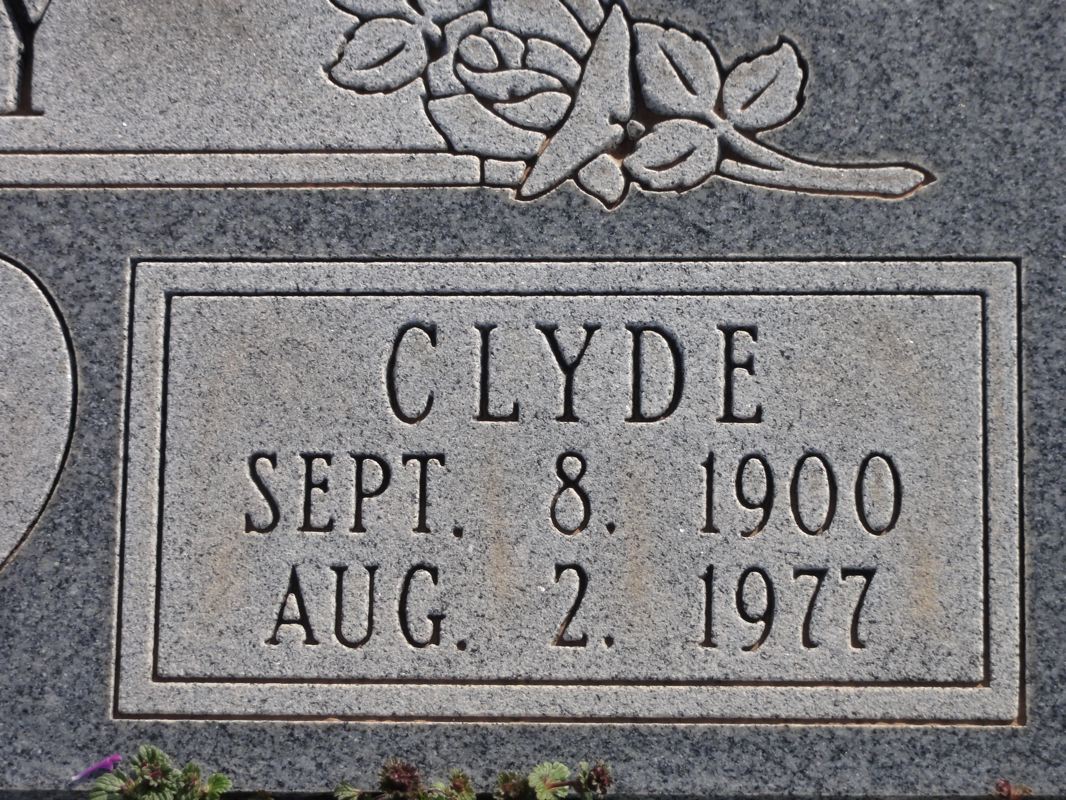 Web editor note: In February, 2012, it was my privilege to visit the grave of Clyde Hoy. I was invited to take part in the annual Affirming The Faith Lectureship in Oklahoma City, Oklahoma. Getting into the area early, I was afforded the opportunity to put about 2000 miles on a rental car in order to locate graves of gospel preachers and church leaders of yesteryear in a wide area. My second day I was able to visit the grave of Clyde Hoy.