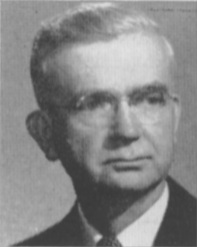 Brief Sketch On The Life Of S.C. Boyce

S.C. Boyce was born June 9, 1890. He was baptized by F.B. Srygley. He was married to Esther Grinder. They had three children. He received his religious training at George Peabody College and Vanderbilt University. He began preaching in 1925 at Highland Avenue Church of Christ in Nashville, Tennessee and continued there until 1938. He later preached at Goodlettsville from 1943 - 1945. His final full time work was at Fairview. Boyce was an excellent writer contributing to a number of journals including, The Gospel Advocate, The Life Line and 20th Century Christian. He wrote a book entitled, "Power To Become," McQuiddy Press, 1946. He taught history at David Lipscomb College (now University) nearly a quarter century. S.C. Boyce passed from this life July 13, 1954 and is buried in the Woodlawn Cemetery, Nashville, Tennessee. 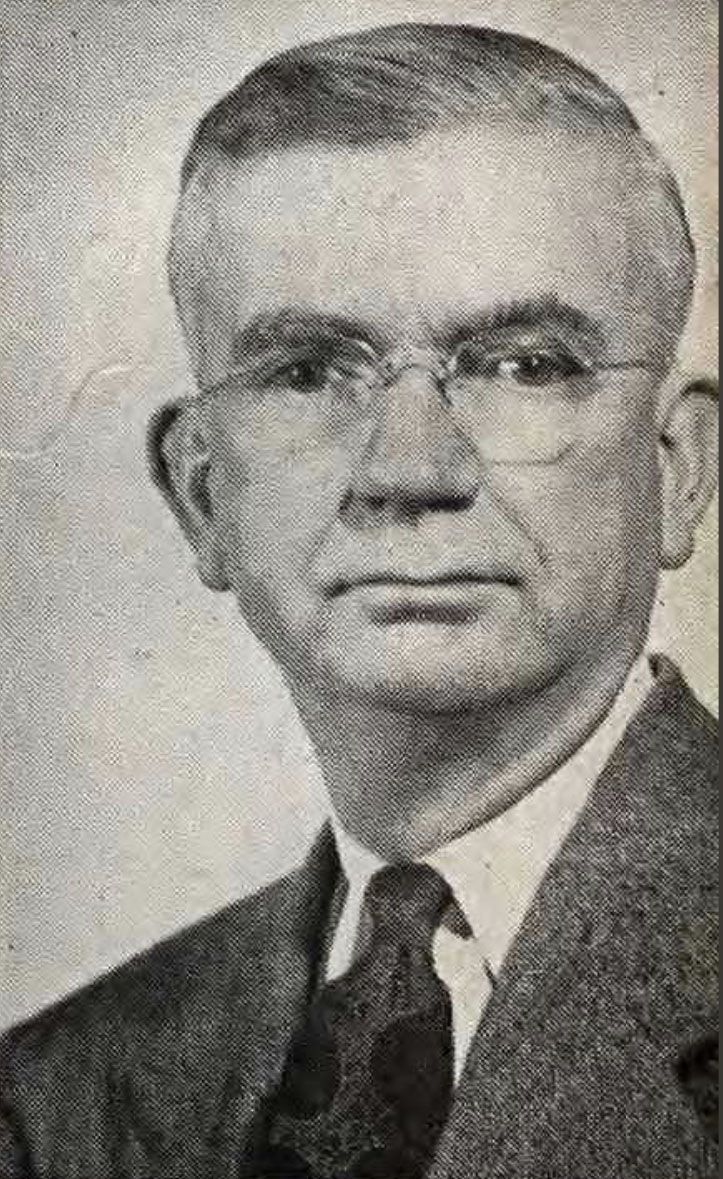 Friends of Lipscomb everywhere were shocked and grieved by the death of S. C. Boyce, Professor of History at David Lipscomb College for a quarter of a century. He began teaching at Lipscomb in September, 1929, and taught through the years until his death, July 13, 1954, at the age of sixty-four years. Thousands of alumni and friends around the earth will mourn his passing and be inspired by the memory of him. David Lipscomb College will be forever enriched by his twenty-five years of devoted service to Christian education. "And I heard a voice from heaven saying unto me, Write, Blessed are the dead which die in the Lord from henceforth: Yea, saith the Spirit, that they may rest from their labours; and their works do follow them." (Rev. 14: 13.) Sister Boyce and her three splendid sons have the prayers of God's people everywhere. The family which S. C. Boyce left behind him is a part of the monument of achievement to his life.

Christian education is a labor of love. The generous spirit of David Lipscomb gave the plan and the land upon which to build what since his death in 1918 has become a blessing to mankind as David Lipscomb College. Splendid buildings and shining new equipment have been contributed to Lipscomb by those deeply interested in the proper education of young people. The college, and each student who has walked through its portals, is indebted to the thousands who have financially supported Christian education at Lipscomb.

And yet there are greater gifts than money and material things. Consecrated teachers who give their lives to the cause of training young people are Lipscomb's most priceless treasure. Among these S. C. Boyce held a high and honored place for twenty-five years. His quiet power for righteousness was felt in every activity of David Lipscomb College. He was a wise counselor, whose advice was often sought by those around him. In times of crisis he stood like a stone wall-calm and unshaken. In moments of victory he was humble and thankful to God.

Students will always remember him as a cheerful man, who seriously lived and practiced the principles of Christ every day. Christ went with him to the market place, to class, and to play. His was a seven-day religion. So quietly did he move and work that the full impact and power of his personality could be felt only after years of close association.

Tributes to Brother Boyce have come from a host of people who knew and loved him. The following are comments from just a few of them:

Harry R. Leathers, Chairman, David Lipscomb College Board of Directors: "S. C. Boyce served Lipscomb long and exceedingly well. He passed through hard trials with wisdom and dignity and was a vital factor in Lipscomb's era of progress. The Board of Directors is grateful for the contribution of such a life to Christian education. Brother Boyce will live on in the memories of all who knew him at Lipscomb and in the person of his fine son, Eugene, of our Department of Physical Education."

B. C. Goodpasture, Editor, Gospel Advocate: "Brother Boyce was always kind and considerate. He was a Christian gentleman of the highest type. He was a man of unfailing loyalty to his convictions."

Batsell Baxter, President-Emeritus, David Lipscomb College: "Brother Boyce went along the even tenor of his way. I never saw him ruffled or out of sorts. He had his convictions and his devotion to duty, but his forbearance and his quality of sympathy and understanding was unsurpassed."

Charles Chumley, Minister, Lipscomb church of Christ: "Through the years Brother Boyce devoted his life to the cause of Christ. The welfare of the church was always his primary concern, and he worked daily to learn the needs of the congregation and to help in directing its affairs. In his passing the church loses a great and good man-a distinguished elder, and a faithful gospel preacher."

Howard Youree, Elder, Lipscomb church of Christ: "Brother Boyce was a great inspiration to me personally and to the other elders. He was a powerful leveling influence in the work of the church. He was a fine citizen, highly respected in the community, reflecting credit on the church by his manner of life."

Willard Collins, Vice-President, David Lipscomb College: "I knew S. C. Boyce intimately for twenty years. He was one of the best men I have ever known. I will miss his counsel so much in directing the student welfare at David Lipscomb College. An elder, father, preacher, teacher, husband, and friend-So C. Boyce lived well all these relationships."

J. P. Sanders, Dean, David Lipscomb College: "S. C. Boyce excelled as a teacher. The impressions made on his students were significant and enduring. His sincerity, understanding, and mildness of manner endeared him to his students. In all his teaching and in personal life he conducted himself as a Christian gentleman. He was a living asset to the cause of Christian education."

Life for S. C. Boyce flowed full to the end. He taught his classes as usual on Friday. On Saturday he went fishing. There was still something of the boy in him if you knew him well. He preached twice on Sunday. He closed his life doing those things he liked to do best. On Monday he became ill, and on Tuesday he passed into the Great Beyond, the first active Lipscomb teacher to die since Ed Darnell passed away in the spring of 1930.

Patient, gentle, wise, pure, and good are words that best describe his life. He was a loving husband and father, a beloved teacher, a wise elder in the church of the Lord, and in every respect a true Christian gentleman. His was a life of self-forgetfulness-a life of unselfish service. Much of the time his income from teaching was very small. He worked at the post office to support his family, and taught for years for less than a living wage. He passed uncomplaining through bitter years of fire and depression at Lipscomb, full of faith all the way. To Christ, to his family, and to Lipscomb he freely gave himself. No man could give more. And so the name of S. C. Boyce is forever linked with that of David Lipscomb and a host of other noble souls in the annals of Christian education. His influence for good will live on as long as vibrant young people walk through the hallowed halls of Lipscomb.

May the dedication of S. C. Boyce to Christian education inspire talented young men and women down through the years to freely give themselves in service to God and man in this same mighty cause. Truly he gives most who gives himself. 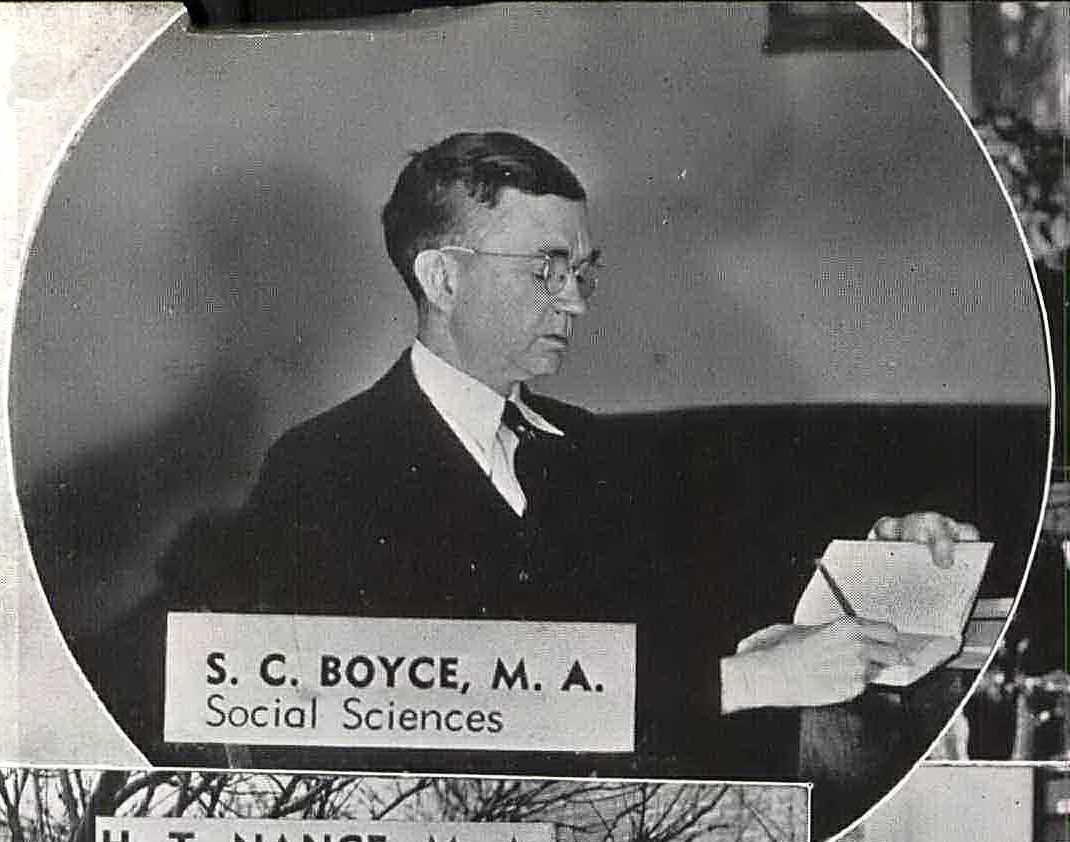 Webmaster Note: At the end of September 2020 it was my privilege to participate in the funeral of one of the elders of Crittenden Drive church of Christ, long-time preacher, Frank Harris Dockins, Jr. (1929-2020). Frank lived to just three months shy of his 91st birthday. He was a household name in Logan County, having preached on the radio station for over 60 years. He attended David Lipscomb College from 1950-1954. Many times we have talked about his memories of his days at DLC. He spoke of the college president, Athens Clay Pullias. He recalled some of his teachers, like the head of the Bible Department, Batsell Baxter, his noted son, Batsell Barrett Baxter, Willard Collins, Ira North, and many more. Over the years I knew brother Dockins, from time to time I'd strike up a conversation after class and I'd ask him, "Brother Frank! Who was your favorite teacher at DLC? Every single time, and without the slightest hesitation, he would say, "S.C. Boyce was my favorite teacher." He had him for his social sciences classes, and always appreciated his rapport with the students and the excellent way of teaching his courses. 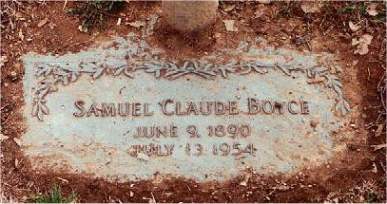 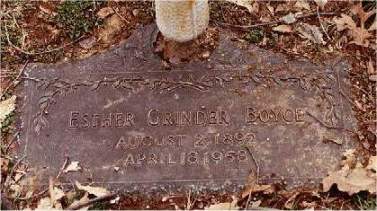 Directions: Woodlawn Cemetery, Nashville, Tennessee, is located behind the 100 Oaks Shopping Center that faces I-65 just south of the I-440 Interchange. From 100 Oaks travel east on Thompson Lane and turn right at the first entrance to Woodlawn's South Side Park (across from main part of cemetery). Take the second left and go to the middle of the Resthaven section and look to your left. Under some large oak trees are the graves of S.C. and Esther Boyce. The actual GPS location of the grave is: 36°06'38.5"N 86°45'39.0"W / or D.d. 36.110694,-86.760833