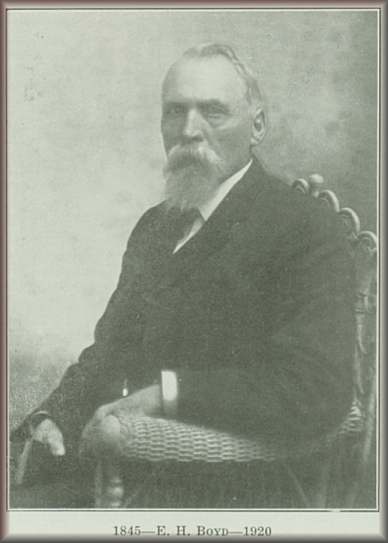 Biographical Sketch On The Life Of E. H. BOYD

Any life lived according to the will of God is a successful life. The more faithful that life is to its mission as God directs, the more successful is the life. Every life should be looked upon as a program for Jehovah to direct certain activities. If the life ignores Jehovah and is self-directed, that life is a failure. It matters not what nay be the accumulation of knowledge, wealth, or power among one's fellows, it is a failure if God is not honored in that life. E. H. Boyd was a successful man in the true sense of that work. He let God direct him in all of his activities.

Elliott Hodge Boyd was born at Pikeville, Tenn., March 2, 1845. He was the oldest child of Jasper and Marjorie Boyd. He was given the full name of his paternal grandfather, who was a major in the war of 1812. His father was a tenant on the Colonel Bridgeman plantation at Pikeville, Bledsoe County, Tenn. This town is now one of the thriving towns of the beautiful Sequatchie Valley in East Tennessee. His father moved from this plantation and bought a small farm near Sequatchie College. Here they gave their children the best advantages of that day and country so far as education was concerned. The family consisted of four sons and three daughters. These were all reared to manhood and womanhood according to the type of training then given by fathers and mothers who loved their children.

E. H. Boyd was in school at Sequatchie College when the War Between the States began. He left the schoolroom and enlisted in the Federal forces, Sixth Tennessee Infantry. Company G. He served to the close of the war. He returned home after the war and was one of the stalwart young men who helped to restore order, establish good feelings, and promote prosperity in his community. He entered school again and was recognized as a leader in his school work. He took some interest in the political affairs of his county; he served as high-deputy sheriff and tax assessor in his county. In 1872, in May, he was baptized into Christ by Elder James Billingsley. He was thirty-one years of age when he married Miss Mary Foust, of Dayton, Tenn. His good wife proved to be a worthy help to him, and to her he owed much of the success that he achieved in the vineyard of the Lord. He bought a farm in the beautiful valley not far from his native haunts and there lived and loved and labored for his community, his family, and his God. He deeded the ground for a church house and schoolhouse, which is now known as Old Bethel.

He built up a strong congregation there, and the church became very active in spreading the truth throughout that county. There is still a small band of worshipers who meet at Old Bethel and keep house for the Lord. A reunion of old settlers, with their children and grandchildren, is held each year in July at Old Bethel. Brother Lesley R. Boyd, of Chattanooga, the son of the late Frank Boyd and nephew of E. H. Boyd, has promoted this reunion. Brother E. H. Boyd began to preach the gospel at this place in 1884.

Brother Boyd became very active in the public work of the church. He saw the need of a preacher of the gospel, and began to study with new interest and zeal the word of God so that he might teach it to his neighbors and all who would hear him. His labors were so in demand that he was called into all the adjoining counties of East Tennessee and as far north as Kentucky. His activities as a preacher extended down the valley into Alabama and Georgia. Through his efforts churches were established and church houses built at Bethel, Pikeville, Jasper, Dayton, and Bridgeport, Ala. Brother Boyd kept a record of the subjects of his sermons, with the number of additions, funeral services, and marriage ceremonies. His records show that he baptized hundreds of people. During his labors as a preacher he lived at Pikeville, Jasper, and Dayton, in Tennessee, and Bridgeport, Ala. Wherever he lived and labored he established a congregation. He remained long enough at these places to develop the membership of the church and encourage the church in its worship and work. He had that quality of heart and life that won to him a host of friends and loyal supporters in the churches where he labored. Brother Boyd was loyal to the truth and preached the gospel with simplicity and persuasion. He was just such a type of man that was needed in that section of the country; he was a blessing to his country.

An effort was made in 1905 to capture the churches at Bridgeport, Ala., and Dayton, Tenn., for the "digressive" movement. Brother Boyd stood firmly against the innovations of instrumental music in the worship and the missionary society. He showed from the word of God that these things had no divine authority in the work and worship of the church. He could testify by his own experience and observation that the missionary society was not needed for the preaching of the gospel and the establishment of churches. He honored the local church as God's missionary society. He taught clearly that the local church could do all that God required of it to do through its own activities without the aid of any human organization. He taught clearly that the church could worship God and each member could make melody in his heart to the Lord without the use of any mechanical music.

Brother Boyd moved from Bridgeport, Ala., to Dayton, Tenn., in 1905, where he resided the remainder of his life. He died September 3, 1920, at Dayton, Tenn. Services were conducted in the church house at Dayton by Brother J. W. Arrowood. Brother Boyd had been a preacher of the gospel for forty years. He was a power for good wherever he went. He loved his family with a devotion unsurpassed by any father. His affection for his family was beautiful, and they were devoted to him. His love for the cause of Christ was strong, deep, and abiding; his stand for the truth was courageous and firm; his loyalty to the church was never questioned, neither was it ever shaken; his faith in God and in the Bible as the revealed will of God was sublime. He lived and died in the full confidence of a Christian. His neighbors and his brethren and sisters recognized him as being a man of God. He entered into rest with a large claim upon all the blessings and promises in the book of God to those who die in the Lord.

Directions To The Grave of E.H. Boyd

Elliott Hodge Boyd is buried in the town of Dayton, Tennessee. This was a city made famous Scopes "Monkey Trial" July 10, 1925. Five years before the attention of the country turned to this small town, E.H. Boyd, area-wide much beloved preacher of the gospel passed from this life. The body of Bro. Boyd was laid to rest in the Buttram Cemetery just 2 1/2 miles north of town. From Chattanooga, Tennessee take Exit 178, Hwy 27 off of I-24 and head north 38 miles to the city of Dayton. Continue on Hwy. 27 through town. On the north side of the city you will come to Rhea Medical Center on your right. Just past the center turn right at the traffic light. A church building will be on the opposite corner. After turning right off Hwy. 27 turn left into the church parking lot. (Church is called Walnut Grove Full Gospel Church) From the parking lot enter the cemetery at the entrance that runs up the side of the church building heading back toward Hwy. 27. The little road will make a hard turn to the right and start going up an incline. You will see the cemetery sign on the left. Go to the top of the hill and to the back of the cemetery. Go to the last gravel road on the right and turn in. Look for "Wiley" on the right. Just behind it and up to the right will be the Boyd monuments. When I was there in September, 2003 the cemetery was overgrown in many places. You could tell they had let it get out of hand, and they were trying to get it back under control. The GPS location of the grave is in the vicinity of: 35°31'07.1"N 84°59'45.4"W / or D.d. 35.518612,-84.995942