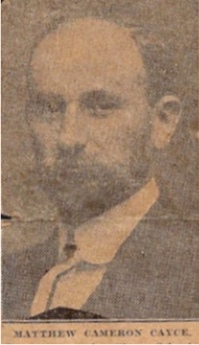 The Contributions of M.C. Cayce

Matthew C. Cayce was born April 1, 1866 in Williamson County, Tennessee. He was the oldest child of John Madison and Virginia Irene "Jenny" Cayce.

At the age of nineteen, the Cayce family moved from their Cayce Springs home near Franklin, to Nashville. They arrived in the city to find only four small congregations of churches of Christ. Matthew's son William Brice, became a gospel preacher and preached in the Nashville area. Over the next twenty-five years through the work of the Cayce family and number of others, congregations in Nashville grew to fifty in number.

Brother Cayce became a business man for a time. However it was not long before he, like his son, began preaching in the area himself. In 1910 while preaching for the Highland Avenue church a thirty-one year old man responded to the invitation requesting baptism. He then immersed Andrew Mizell Burton into Christ.

The following year, his brother William moved his family west. Settling in San Saba, Texas, he worked to build the church in that state the remainder of his life. Matthew, seeing the great need for evangelism in Mississippi moved to Columbus. His chief support came from A.M. Burton. Upon their arrival, they recognized that no church existed after the ancient order. Work had been done years before in Columbus, but because of the digressions of the churches years earlier, the work had all but disappeared. He began with his family to once again worship after the first century model. Later the family would move to Jackson to find similar circumstances existing there, and with the same commitment, planted the work there once again. In 1914 the work in Ridgeland, Mississippi had been planted by brother Cayce. During one service a young man responded to the invitation by the name of John Roy Vaughn. Later, he would do much work in Mississippi, also being sponsored by A.M. Burton.

The life of M.C. Cayce came to a sudden end April 19, 1922. He was buried in the Mount Olivet Cemetery in Nashville. Only eternity knows what blessings the Cayce family provided the churches in Tennessee, Texas and Mississippi. Under that umbrella of blessing, just consider the good M.C. provided the work of the Lord through the accomplishments of his sons in the faith, A.M. Burton and J. Roy Vaughn.

In Memory Of Matthew C. Cayce

On April 19, 1922 at 8:40 P.M., the immortal spirit of Matthew C. Cayce quietly passed to the great beyond. The death angel made a very hurried rise and shielded him from great suffering. Brother Cayce was prepared for his afternoon bath, at which time he was overcome by gas, never regaining consciousness. He lived something like three hours. Brother Cayce was indeed a hero in the kingdom's fight, a brave soldier in the fray. He died as he had always lived, busy. His conception of the duty he owed to the cause and to his fellow man was of such proportion that he seemed never to have one minute to spend in anything not connected with it. As Jesus called Peter and Andrew from an active life into the life of greater ministry, so also did our Master call this faithful servant to a greater and better life. He seemed not to know what the word "quit" meant, he had no time to get discouraged. It can be truthfully said that he was one of the busiest men in the Master's work. He had a marvelous influence over all he came in contact with. He pressed the work of the Lord with a whole-hearted earnestness, inflexible faithfulness, sleepless energy, and patience that knew no tiring. He had a simplicity of manner and accent of speech that twined the hearts of his hearers around the cross of Jesus and his redeeming love, all the time remaining transparent and invisible as a man. He thoroughly "sunk" himself in the gospel scenery.

People very seldom complimented him as a preacher, but frequently have I heard people say "To hear that man preach is to love God more and want to live a better life." If I ever met a man who had more of the real spirit of the Master and who preached because his heart was full of the gospel story and the love of his Lord, I do not remember him. To be with him was but to resolve deeply that you would live a better life, give more, pray more, sing more, visit more sick, comfort more sad and lonely, and to preach with more zeal and love to those who are going astray, heaven's sweetest story. His every sermons was preached as though it would be the last he would ever preach, and was preached with such completeness and comprehensiveness that one would conclude it was the last one he would be permitted to hear and that tomorrow would be the great day of accounts. A person could not hear him preach without feeling his responsibility to his Maker.

For him to know a soul was in a lost condition called forth a pity and concern that would cause him to spend sleepless nights. Personally, he was a man that possessed the sweetest spirit, the strongest faith, the most active zeal, the kindest manners, purest life, and the firmest convictions of any man that it has been my good fortune to meet.

If he had a weakness or fault, I did not discover it. I was too busily engaged admiring his manliness and strong Christian character to find it. Truly it can be said of him: "The world is a better place because of his life and work." He sweetly rests from his labors, and, if we live a godly life in Christ Jesus, we shall join him "over there." 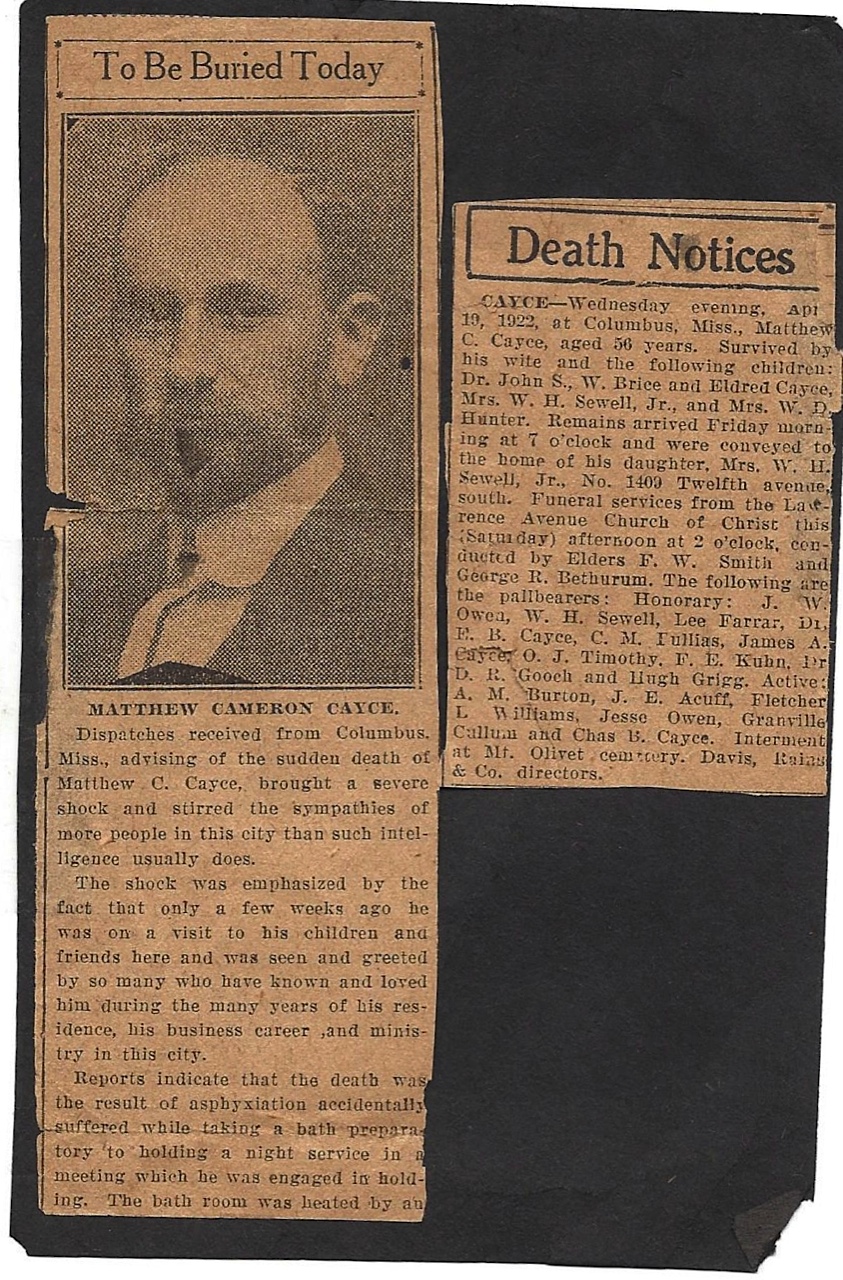 Click on graphic to see zoom in
Courtesy of Tom L. Childers

To Be Buried Today

Dispatches received from Columbus, Miss., advising of the sudden death of Matthew C. Cayce, brought a severe shock and stirred the sympathies of more people in this city than such intelligence usually done.

The shock was emphasized by the fact that only a few weeks ago he was on a visit to his children and friends here and was seen and greeted by so many who have known and loved him during the many years of his residence, his business career and ministry in this city.

Reports indicate that the death was the result of asphyxiation accidentally suffered while taking a bath preparatory to holding a night service in a meeting which he was engaged in holding. The bath room was heated by an . . .

The Signature of M.C. Cayce

Directions To The Grave of Matthew C. Cayce Family Plot

The Cayce family plot is locate in the old cemetery at Mount Olivet. He lies among many of the saints who built the church in Nashville, and throughout the land. The cemetery is located at 1101 Lebanon Pike, Southeast of downtown Nashville. Click over to Mt. Olivet for map and location of the grave in the cemetery. His remains rest in Section 17. See pinpointed location on Mount Olivet map here. Section 17, Lot 25 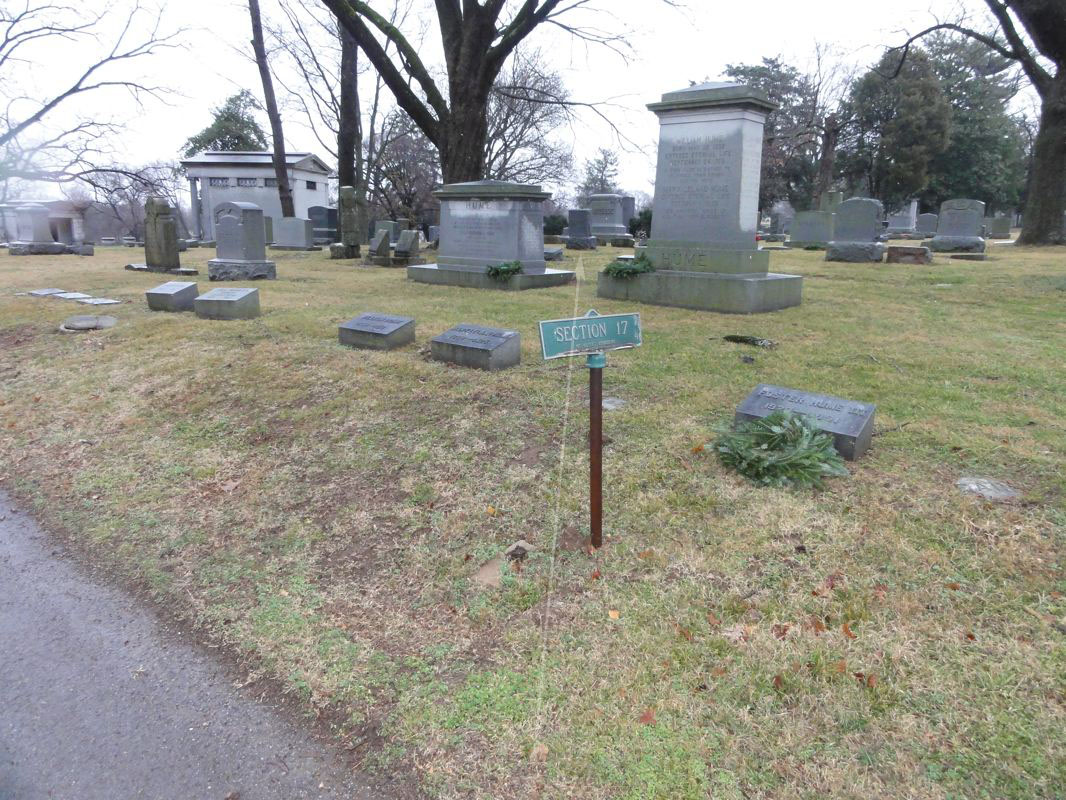 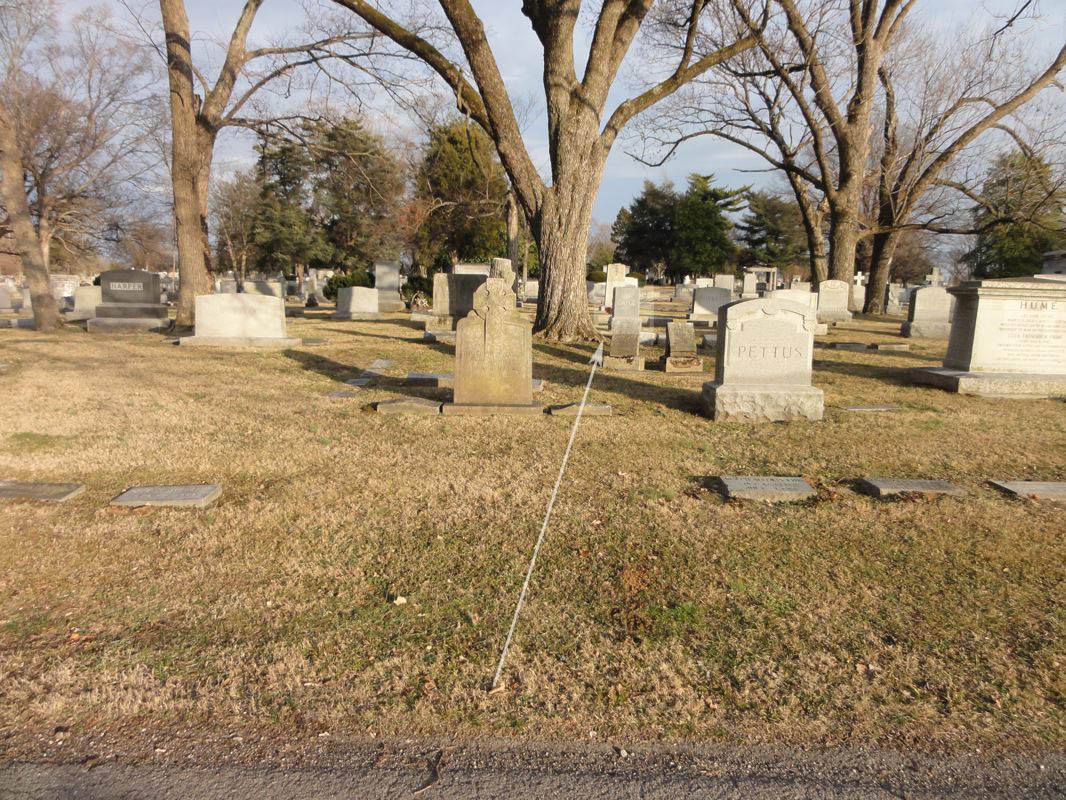 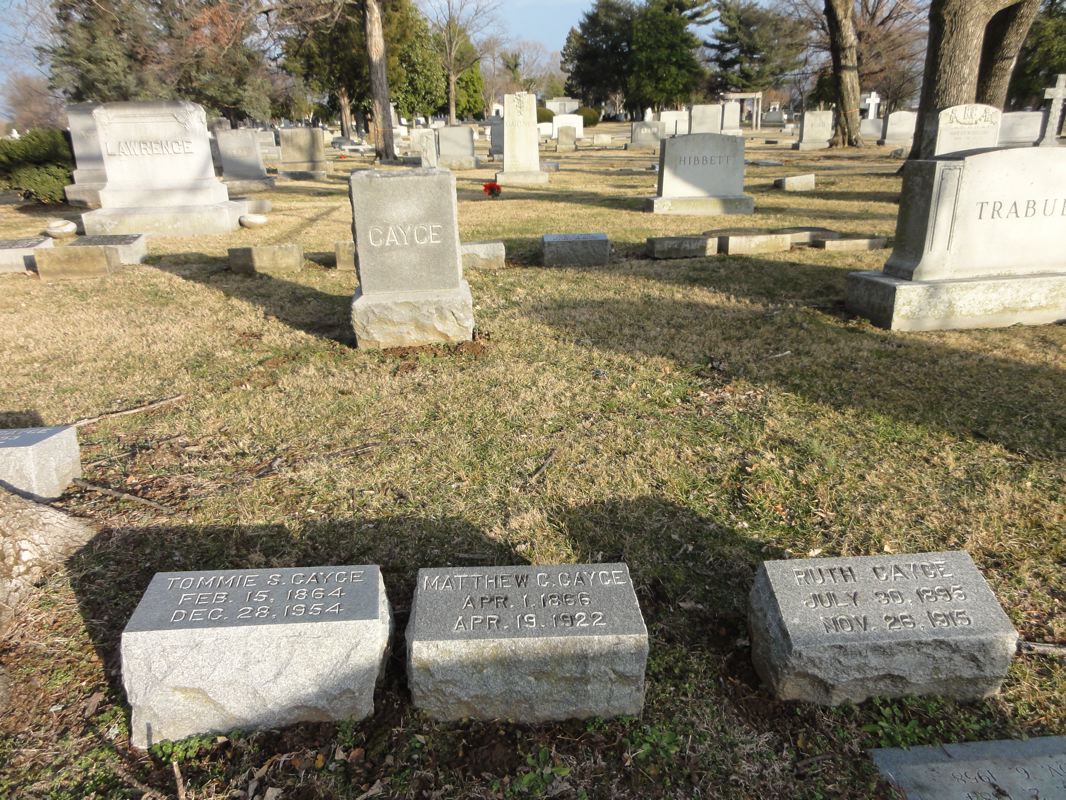 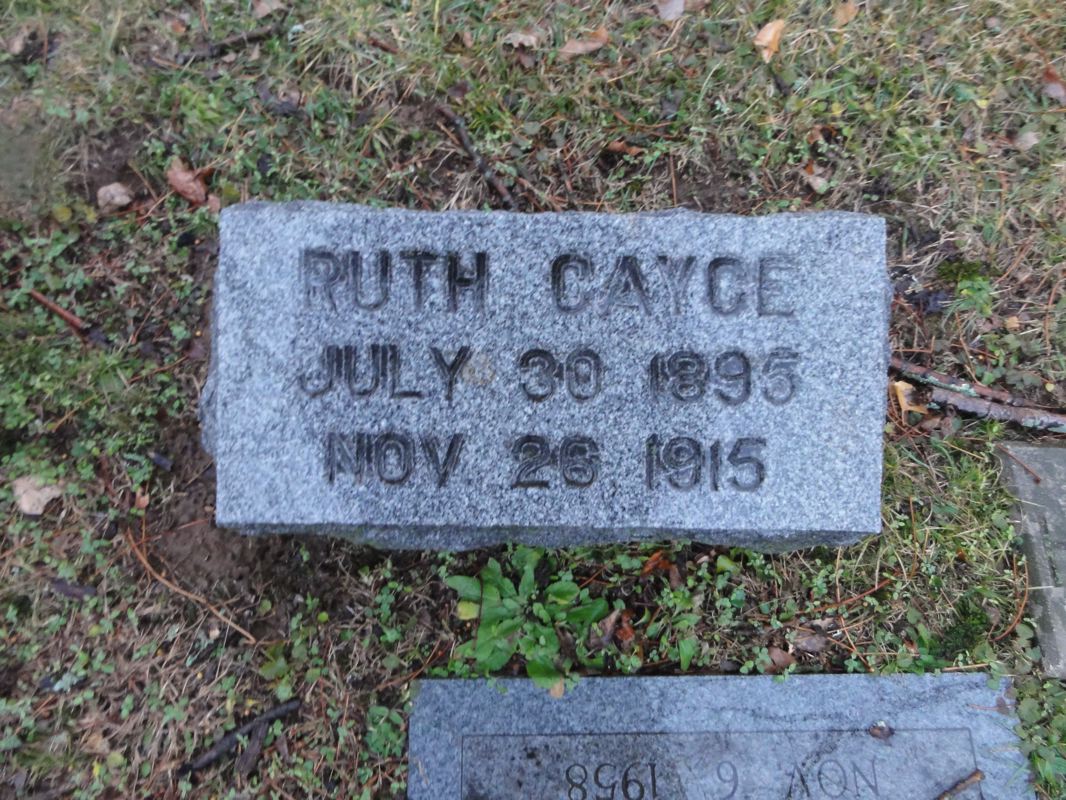 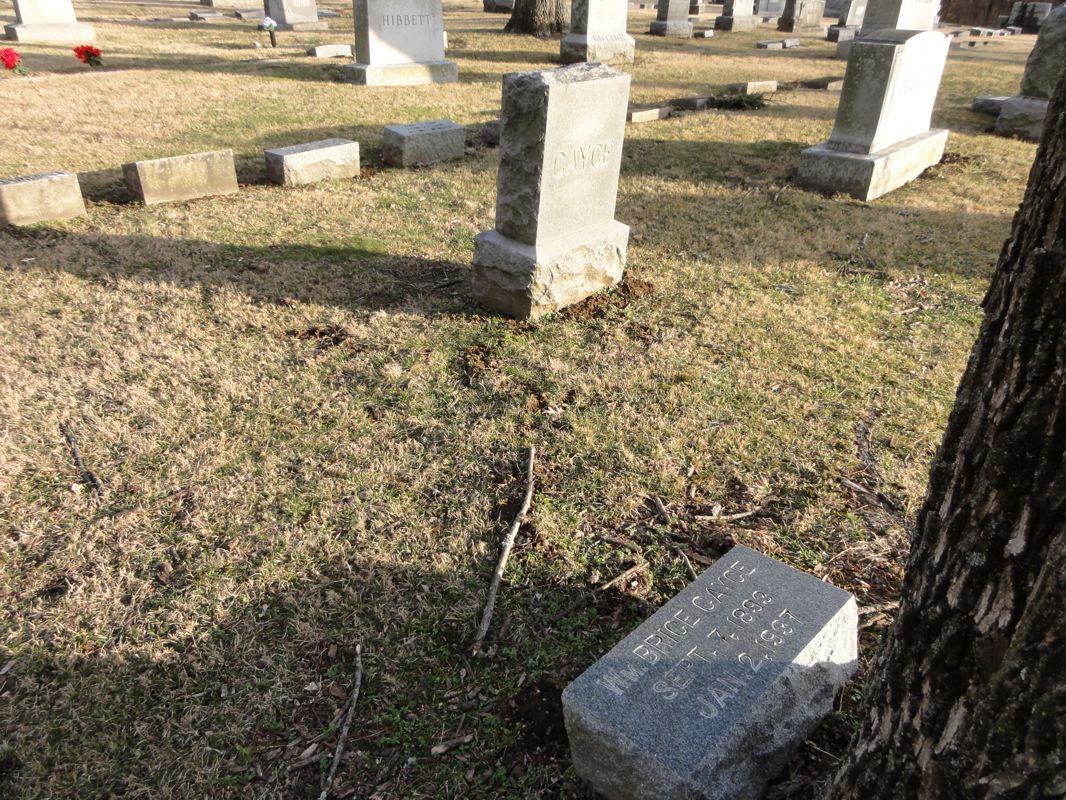 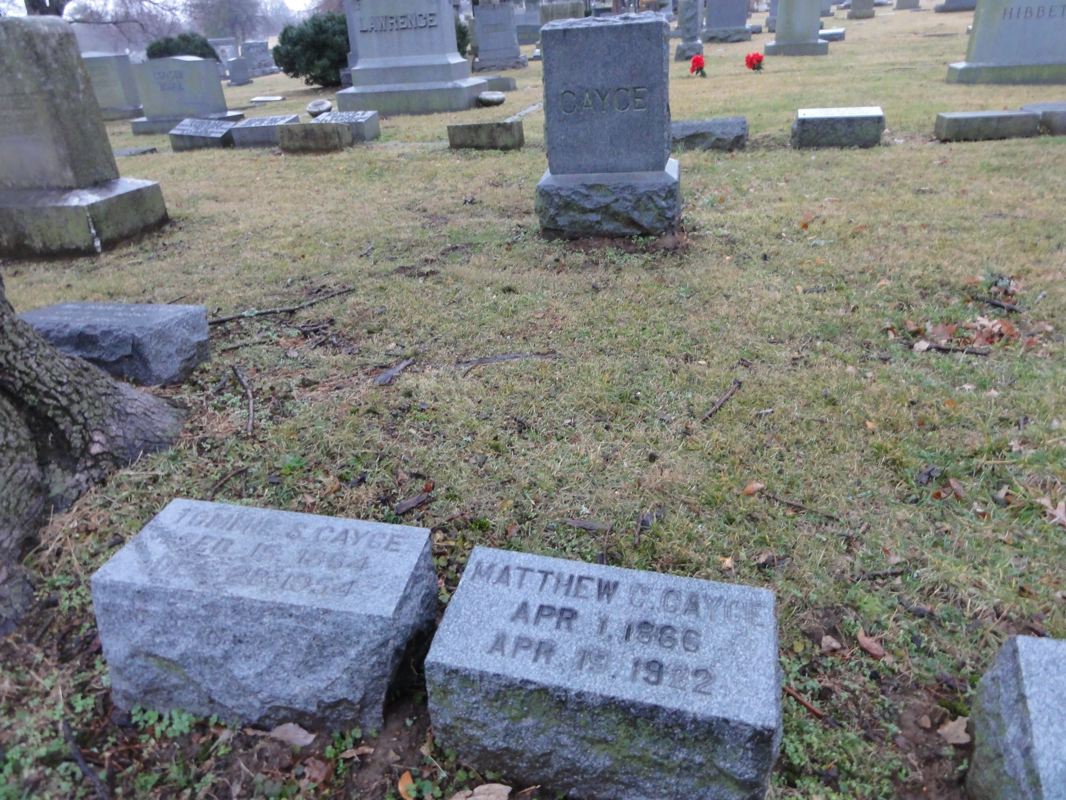 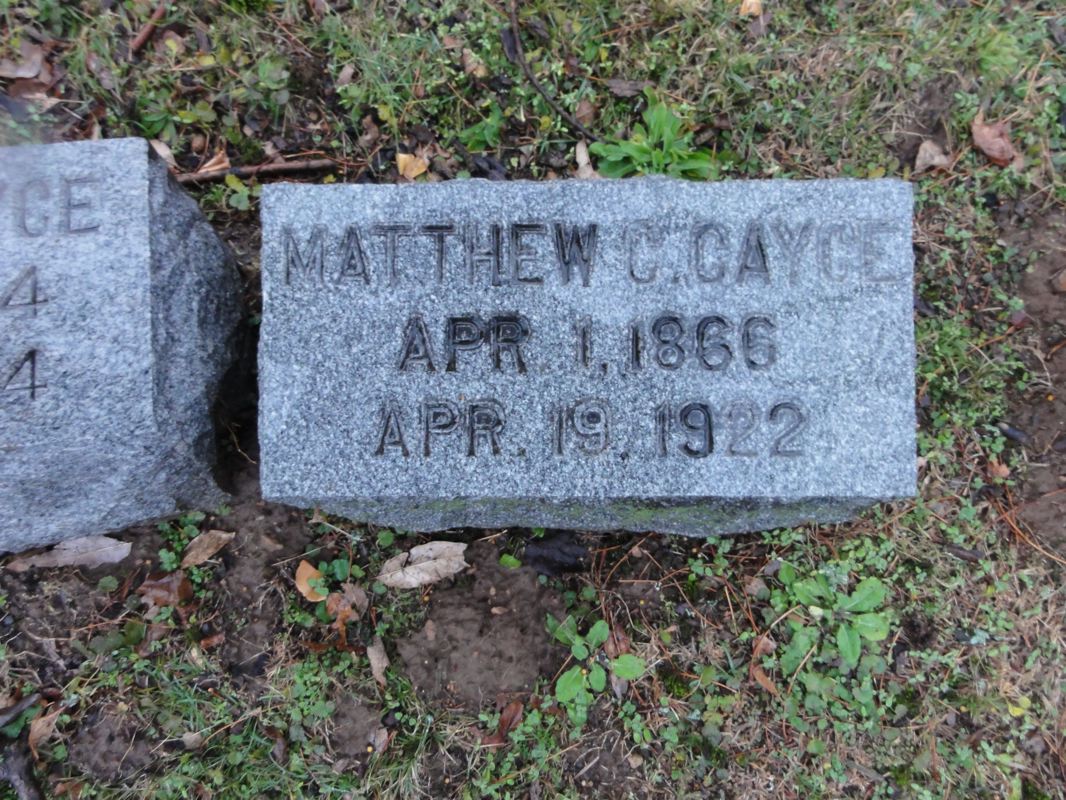