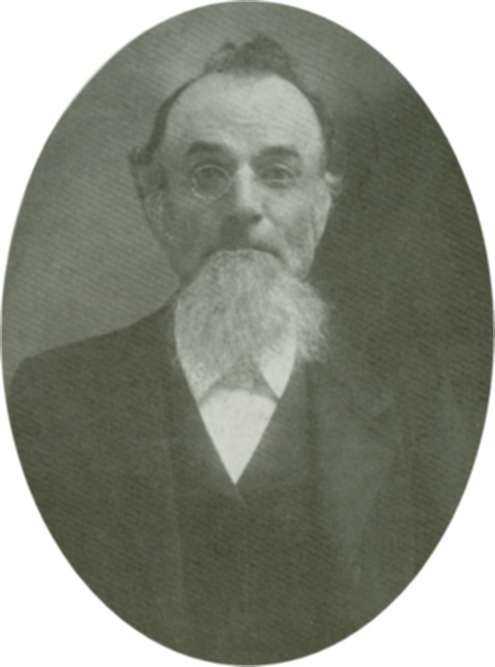 Biographical Sketch On The Life Of W.R. Chaffin

The silent forces are mighty in all the realms of nature and life, yet they are often forgotten or never observed. Many of the forces of nature are unknown to the average citizen. Even forces which sustain life and bring about happy conditions of life are often unknown. Few people think of the silent influence of the rays of sunlight, yet intense would be the darkness that envelops the earth were it not for them. The mighty forces that are at work with the gentle showers are unobserved. The hundreds of forces that work in nature, in the bowels of the earth, on the surface, and in the air, are unknown to the average person. The unseen agencies on land and sea help to keep our earth alive with vegetation. The silent forces in animal life have their mighty influence in perpetuating the animal kingdom. Few recognize the forces at work in creation and procreation of the animal kingdom.

Great and numerous are the silent forces in the natural realm, but still greater and more numerous are the forces at work in human society and in the spiritual realm. There is no one who can tabulate all of these forces, and the majority of them are unknown to the average citizen. When we think of the great number of forces at work today in our complex civilization, we are reminded of the fact that many are silent and observed by only a few. Usually only those men who have been in the limelight and who have by fortune or misfortune directed the currents of human society have been recorded on the pages of history. The great number who have made up the warp and woof of society are forgotten. Only the generals and other high officials who directed the battle have their names enscrolled on marble and bronze. The common soldiers who bore the burden of the battle and who died upon the field were forgotten or unknown. This is true in the church of our Lord. Only the leaders have been remembered, while the soldiers of the cross who sacrificed and served have been forgotten. William Riley Chaffin belongs to this class of forgotten heroes of the gospel. In the army of the Lord all have a place to fight; in the body of Christ each member has its place to function; in the kingdom of God each citizen is a priest and a king; in the vineyard of the Lord each worker does important work. It is not in the power of man to estimate one kind of work in the service of God and rank it higher than another class. All work in the church is important, and one phase of it is as important as another phase. We should give honor to whom honor is due. Those who have worked in the rural sections and obscure corners are as much heroes of God as those who have been leaders in the eyes of the world.

William Riley Chaffin was born on September 29, 1840, in Jackson County, Tennessee, about five miles south of Gainesboro. He was the son of Benjamin F. and Rebecca R. Chaffin (nee Loveall), and was the great-grandson of Abner Chaffin, who with his father migrated from Virginia, through North Carolina, into Tennessee, shortly after the Revolutionary War. Young Chaffin inherited strong intellectual powers of mind. He had but little opportunities for an education. He had no advantage of a college education and had no opportunity to come in close touch with any one who had been so favored as to obtain a college education. He was reared in the country, where there were but few schools, and these of the very poorest kind. He took advantage of the opportunities offered him and made rapid improvement. He soon acquired enough education to teach school in his county. He taught in the public schools in his county and the adjoining counties for a number of years. There were no better people in that section of the country than Riley Chaffin.

Among the other good qualities which were transmitted to him through his parents was the adorning trait of piety. He had a religious turn of mind, and he revered the Bible as the word of God from his youth up. He delighted in the study of the Bible, and he became very familiar with the teaching of the Bible and was well versed in Biblical lore. He committed to memory nearly all of the New Testament and much of the Old Testament. He could quote Scripture for hours at a time. He had a retentive memory. His friends said that he never forgot anything that he learned. He obeyed the gospel in August, 1859, at Antioch, in Jackson County. William and Garland Kuykendall were in a series of meetings at this place at that time. Old Brother Garland Kuykendall baptized him in the beautiful little stream, Flynn's Creek, a tributary of the Cumberland River. This clear, limpid stream flows by the church house at Antioch. He began preaching the gospel in 1865. His first public effort was in what was called "Peter's Hollow," in Jackson County, not far from his home. There were few preachers at that time in that county of any faith, and there were fewer preachers of the gospel. His services were soon in demand, and much of his time was given to the proclamation of the gospel.

At the beginning of the Civil War he was drafted into the Confederate Army. He was not in sympathy with secession and was bitterly opposed to slavery. He served out the time of his draft and then enlisted in the Federal Army and served in it until the war closed. He did not believe in carnal warfare; but since he saw no way of escaping service as a soldier, he determined, if he had to fight, that he would fight on the right side. So soon as he got out of the army he went to work helping his county back to normal conditions. He was a lover of peace and a peacemaker among his fellows. He saw the great need of building up the churches and strengthening them for their mission. Most of his work as a preacher of the gospel was done in Jackson and Putnam counties. In 1891 he moved from Jackson County to Putnam County. He strengthened the churches in that county by his monthly visits and strong gospel sermons. He preached the truth and love and opposed error with courage. He was a man of convictions and did not fear any one who opposed his efforts in proclaiming the truth. For many years he preached for the old Bethlehem Church, in Putnam County, and remained with it during the latter part of his life. That church became one of the strongest in the county under his guidance and through his instruction.

Brother Chaffin had an impediment in his speech, but his presentation of his sermon was logical and forceful, and he never failed to put across the lesson which he had chosen. He was devout, conscientious, fearless, and outspoken. Those who knew him knew where to place him on all moral and religious questions. He made his impression upon the community in which he lived. The world is better because William Riley Chaffin lived in it.

Brother Chaffin died in Nashville, Tenn., September 16, 1916. He was buried at his old home, near Bethlehem, in Putnam County. He never sought publicity or courted popularity. He served God and his fellow man nobly. He was one of the silent forces which helped build the church of our Lord in Jackson and Putnam counties.

Location Of The Grave Of William R. Chaffin

William Riley Chaffin is buried in the Grimes Cemetery, south of the city of Cookeville, Putnam County, Tennessee. On I-40 in east central Tennessee, take Exit 286 (Highway 135). Go south at the exit. At this point you are 8.9 miles from your turnoff. Traveling south on Cookeville Road go 4.9 miles and you will come to a split in the road. Hwy. 135 goes to the left, but you will stay to the right. The road becomes Cookville Boat Dock Rd. From the split go 4.0 miles through the Nash Community, and turn left on Ball Hill Rd. Go 1.1 miles, past John Rice Rd, past Medlin Rd. and the road will dead end into about five silos and a farm. The road to the left is Old Mill Rd. However you will turn to the right on the gravel road that leads you onto a farm. Go out the farm road .3 miles and turn right onto another gravel road. At the end of this road (.1 miles) on the right is the Grimes Cemetery. According to H. Leo Boles above you are now on the old farm of W.R. Chaffin. There is no sign showing the name of the cemetery. When you enter the cemetery through the cattle gate, go all the way to the back of the cemetery and to the left corner. The last two graves are that of W.R. Chaffin and his wife Violet.

The directions above represent those I wrote when visiting the grave September 5, 2003. I had located Chaffin's grave listing in the Cookeville City Library as being in the Grimes Cemetery, but it was not located on any map. I knew the general area as being off Old Cane Creek Rd. which is off Cookeville Boat Dock Rd. I was knocking on doors and asking directions from tobacco farmers in their field. But I finally found it as the sun was going down. It was a real treat to find the grave of this great old soldier of the cross. 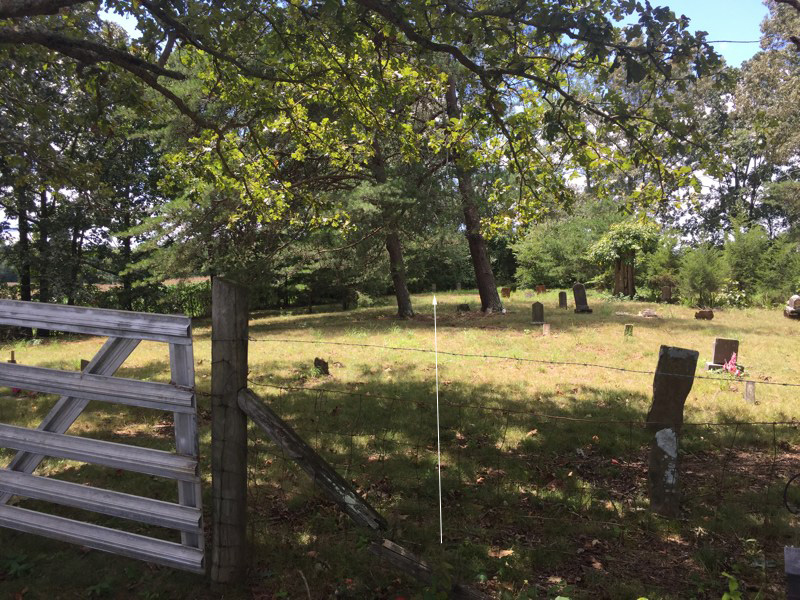 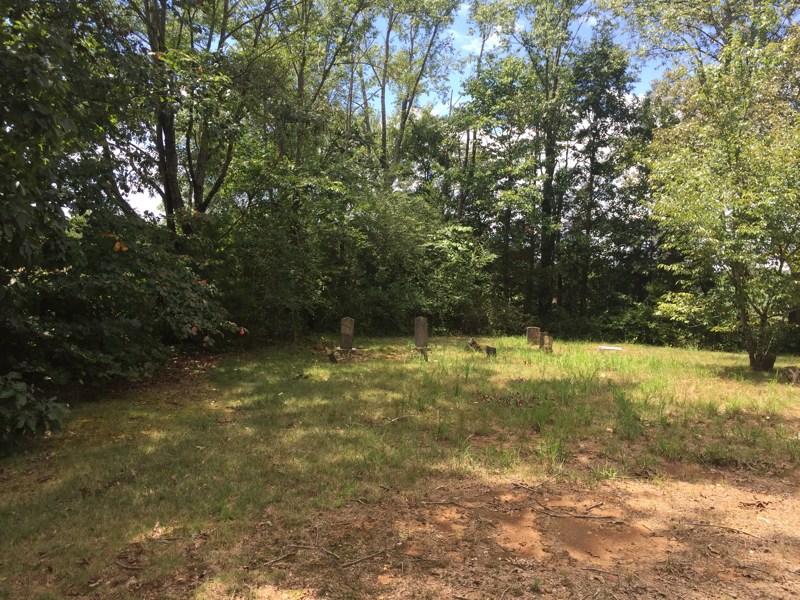 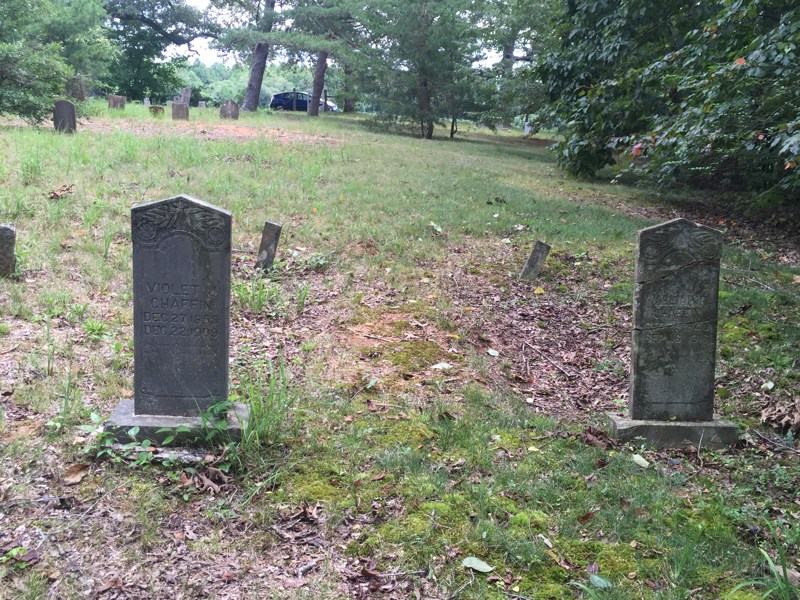 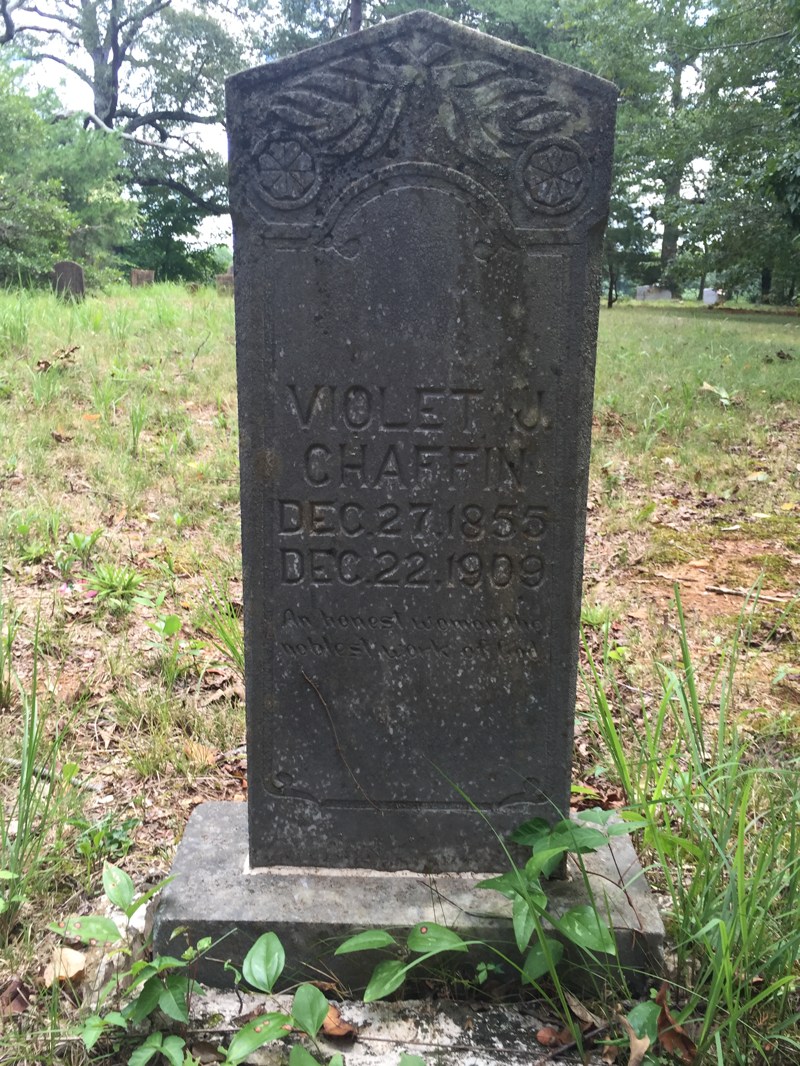 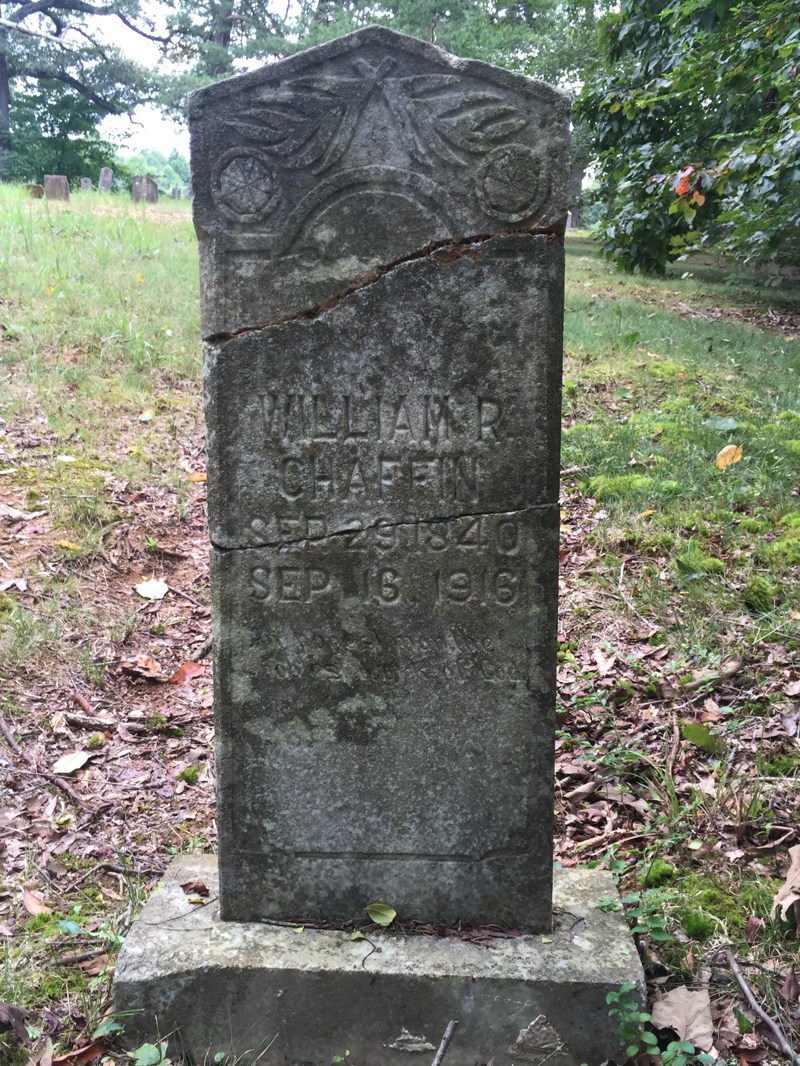 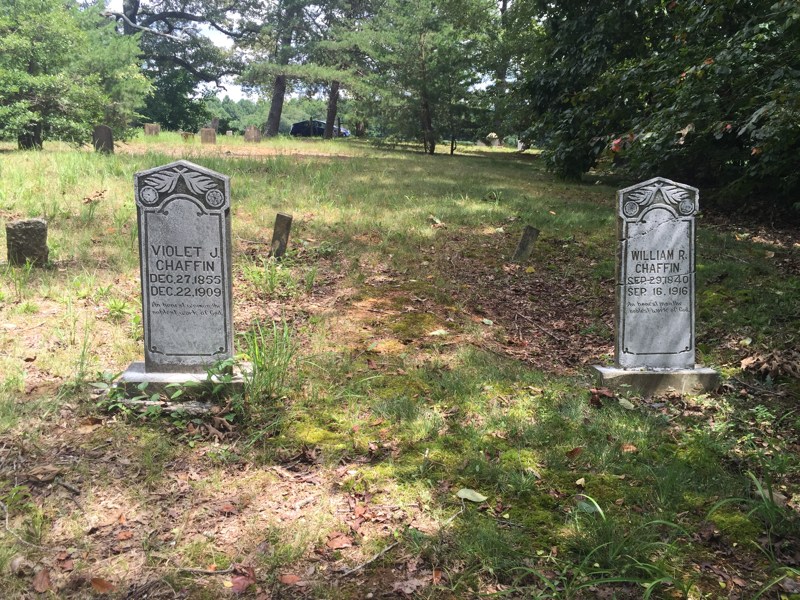 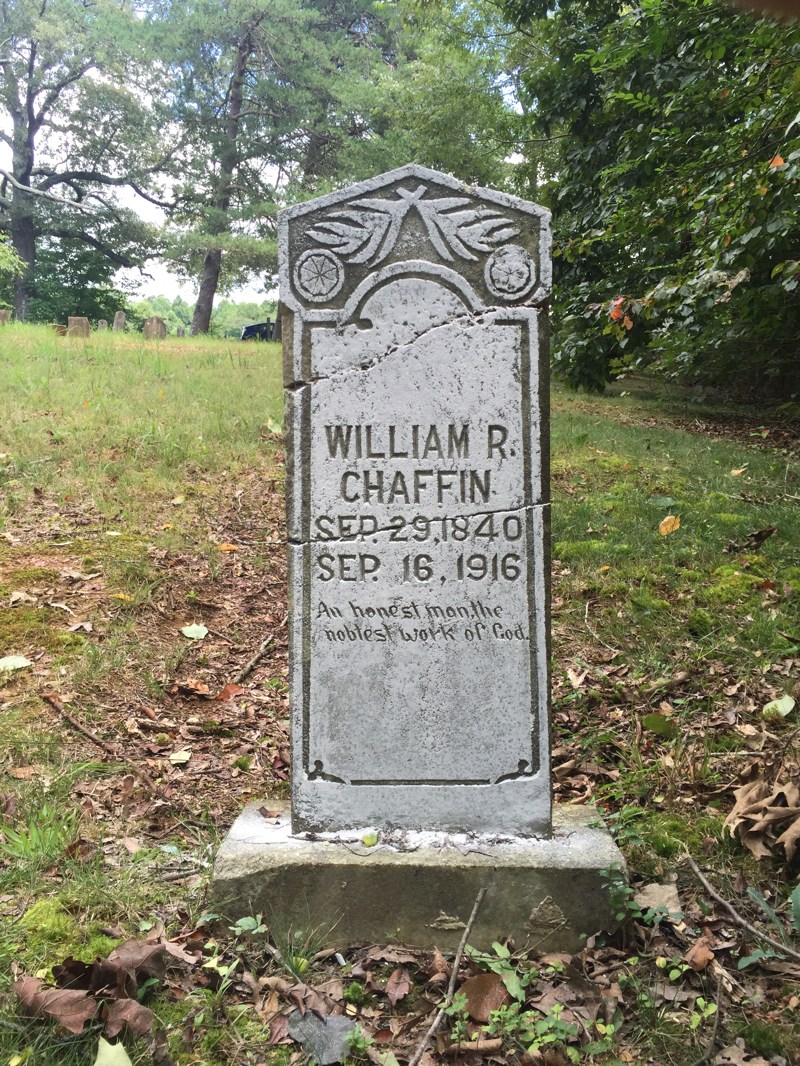 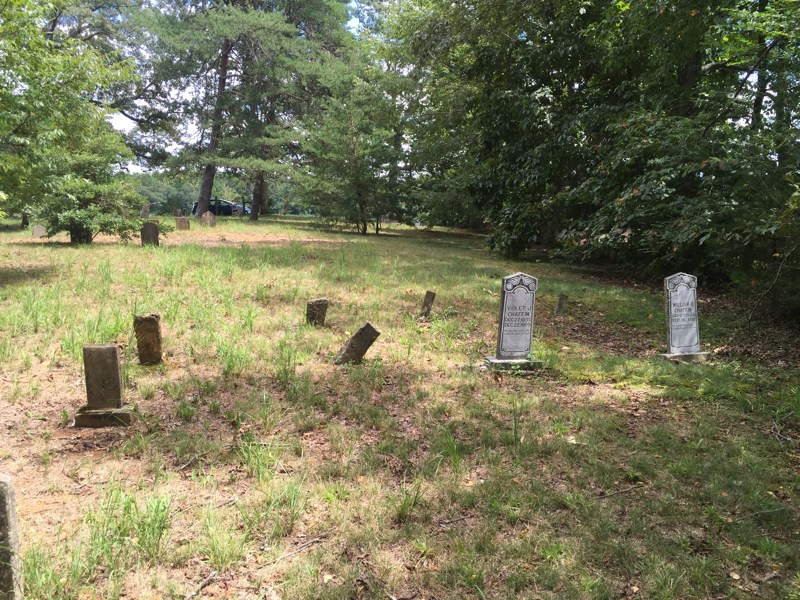