Sketch On The Life Of Thomas B. Craighead

Thomas B. Craighead was a Presbyterian minister who lived and worked during the period when Barton W. Stone and others began the Christian Movement. As Stone had been a Presbyterian minister, initially schooled and ordained in the Orange Presbytery of North Carolina, he would have known the Craighead family very well. He was the son of Alexander Craighead of "Suga Hill" in Mecklinburg, N.C. His sister was Rachel Craighead Caldwell, the wife of David Caldwell who conducted the old Log College in Greensboro where B.W. Stone was attended school, and where he initially "got religion." Craighead was graduated from Princeton in 1776, and ordained by the Orange Presbytery in 1780. The same year he married Elizabeth Brown of Frankfort, Kentucky.

In 1785, Craighead had moved to about ten miles north of Nashville, Tennessee and established a Presbyterian church call Spring Hill. He was the first minister to do so in the region. While there he established a school called Davidson Academy, which ultimately became known as the University of Nashville.

When Barton Stone made his move from North Carolina to Kentucky to preach among the Presbyterians, he stopped and spent some time in the area where Craighead lived. One very interesting incident took place when Stone was preaching at the old church at Spring Hill. He was travelling with a colleague by the name of J. Anderson. In his own words, note the following,

We had our last appointment in Father Thomas Craighead's congregation, in which neighborhood we had often preached. As we expected a large and intelligent audience, we endeavored to prepare discourses suitable to the occasion. My companion Anderson, first rose to preach from these words: 'Without holiness no man shall see the Lord.' I shall never forget his exordium, which, in fact, was also his peroration. 'Holiness,' said he, 'is a moral quality '''he paused, having forgotten all his studied discourse. Confused, he turned with staring eyes to address the other side of his audience, and repeated with emphasis, 'Holiness is a moral quality,' and, after a few incoherent words, he paused again, and sat down. Astonished at the failure of my brother, I arose and preached. He declared to me afterwards that every idea had forsaken him; that he viewed it as from God, to humble his pride, as he had expected to make a brilliant display of talent to that assembly. I never remembered a sermon better and to me it has been very profitable; for from the hint given, I was led to more correct views of the doctrines of original sin, and of regeneration. (A Short History Of The Life Of Barton W. Stone, Autobiography, p.24)

Later in Stone's life he refered to some of the injustices in the way he was treated among the Presbyterians of Kentucky in the pages of The Christian Messenger, comparing it to the less stringent way they dealt with other ministers who had rejected some of the basic doctrines of Calvinism. He said,

Justice requires me to state that Presbyterians have become more liberal in their conduct since that boisterous period. To prove this I will state a fact: Soon after our separation two learned and pious Presbyterian preachers, Thomas B. Craighead and John Todd, were deposed by the Presbyterians for preaching the same doctrine, that a sinner can and must believe the gospel, and by this means receive the spirit, and be saved. But some years after, the presbytery restored Mr. Craighead without one acknowledgment of his error, 'or my change of his sentiments. They also restored Mr. Todd in the same manner as I have been credibly informed. (The Christian Messenger - Vol. 1, p. 194, under the title, History of the Christian Church in the West, Vol. VI.)

It is not known as to whether Stone had any direct contact or influence on Craighead when he initiated his views on personal responsibility in religion. In 1800 Barton Stone had heard the preaching of James McGready at Gasper and Red River Meeting houses in Logan County, where McGready proclaimed personal responsibility in religion, a.k.a. "a sinner can and must believe the gospel, and by this means receive the spirit, and be saved." Though McGready was not so kindly treated by the Synods as that of Craighead and Todd, it would go to show that other Presbyterians and church ministers of that day were wrestling with the Calvinistic teaching of experiential religion.

Craighead continued in the Presbyterian church until the day he died. He was an educator, and a powerful evangelist. His tombstone, though now faded with time and elements proclaims that he was a man of fine talents and a pulpit of clear thought, he did the cause of religion much service. Though there is no evidence that he ever recognized or sought to connect with the Christian movement, it is essential to recognize his involvement in what is called the Kentucky Revival.

Location Of The Grave Of Thomas B. Craighead

Thomas B. Craighead is buried in the Springhill Cemetery in the North East part of Nashville, Tennessee. Specifically the cemetery is in Madison. From Downtown Nashville head north on I-65 north. Take Exit 16a, Briley Parkway, heading east. Go to the second exit, 14b. Gallatin Pike. Turn left and travel north across the bridge and look to your right. You will see Springhill Cemetery. This cemetery is the outpouring of the old Presbyterian Church Cemetery adjacent to the old church where Thomas B. Craighead preached. Travel over the hill and enter the main entrance. After entering head back toward the corner of the cemetery that you saw initially closest to Briley Parkway. This will be the old part of the cemetery. After looking at the pictures below, you may easily be able to locate the Craighead plot. Not far from the Craighead plot is the grave of Andy T. Ritchie, a gospel preacher. 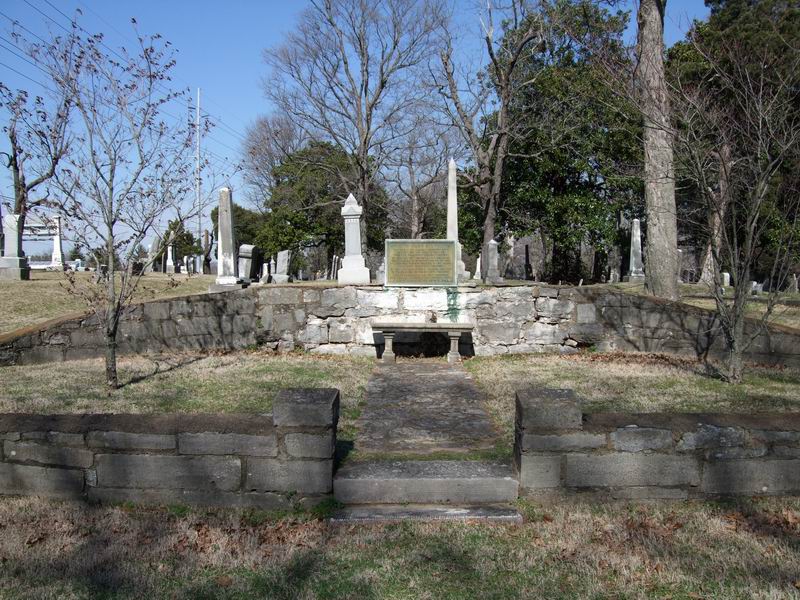 The Dimensions of the building were 24' by 30'. Thomas B. Craighead worked here for over 30 years. 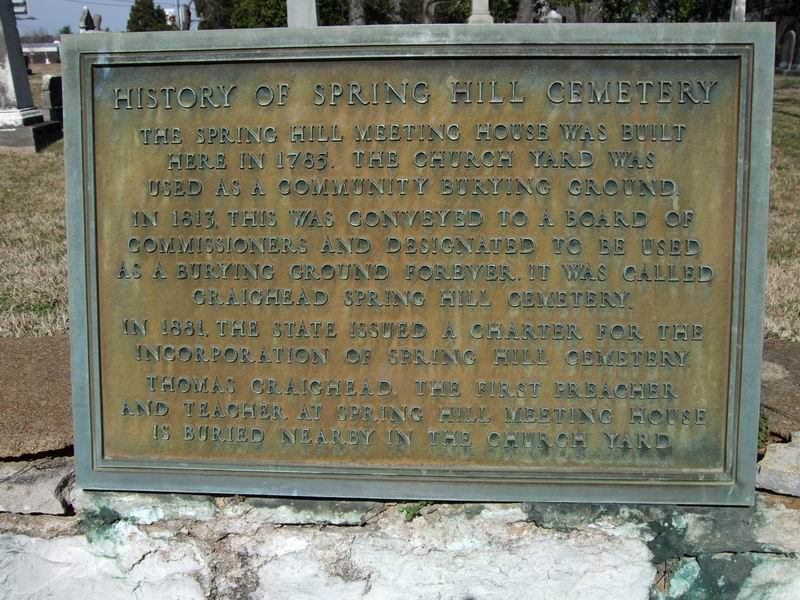 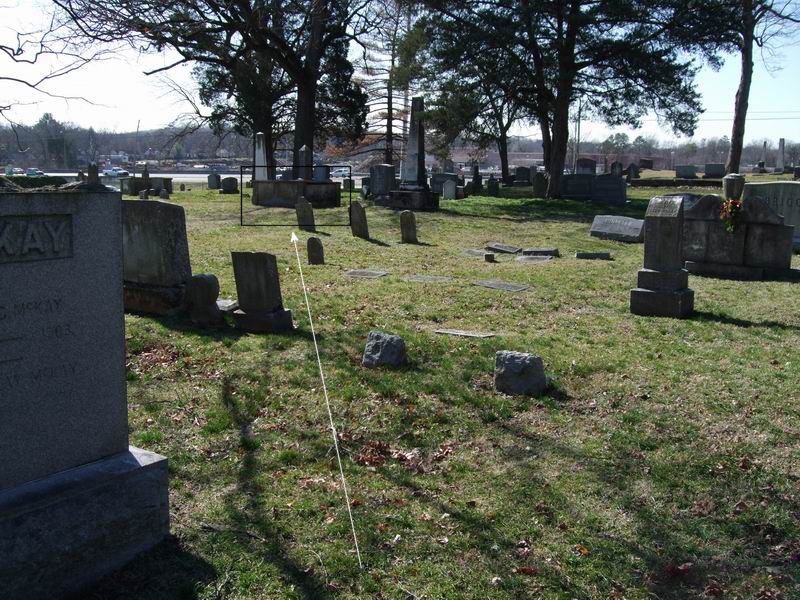 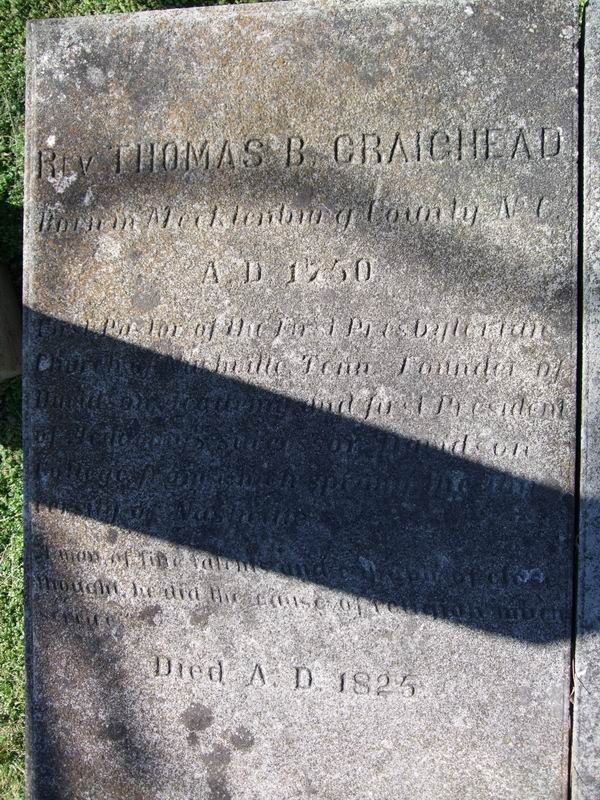 Rev. Thomas B. Craighead
Born In Mecklenburg County, N.C.
A.D. 1750
The Pastor of the First Presbyterian
Church of Nashville, Tenn. Founder of
Davidson Academy and first President
of Academy's Successor Davidson
College of which spring the University
Of Nashville.
A man of fine talents and capable of close
thought, he did the cause of religion much
service.
Died A.D. 1825 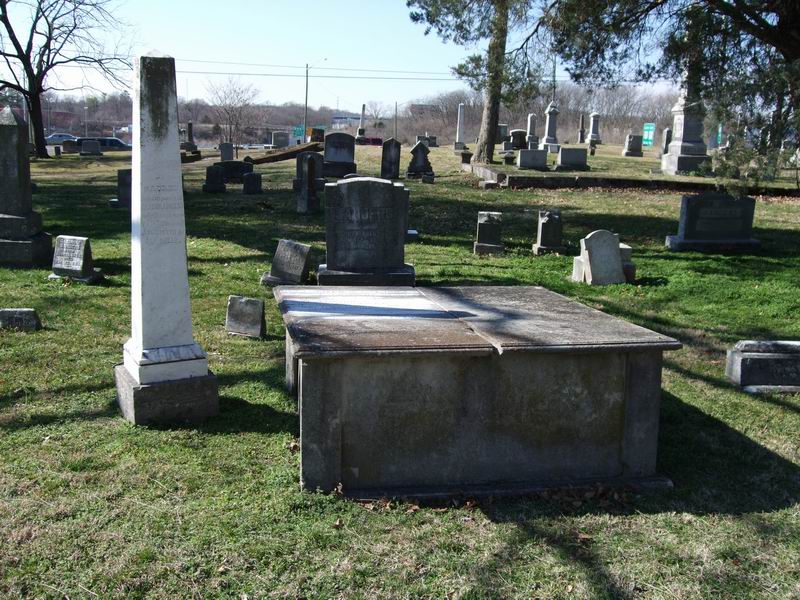 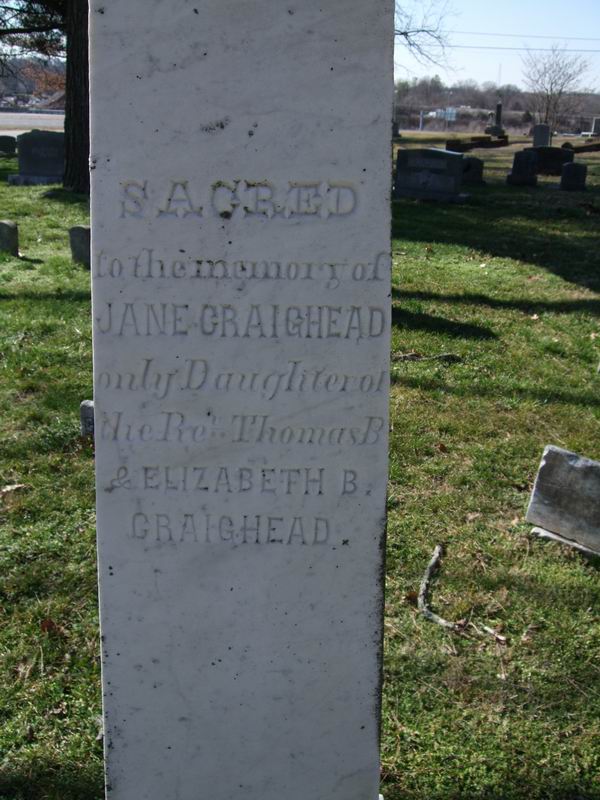 Sacred to the memory of
Jane Craighead
only daughter of
the Rev. Thomas B.
& Elizabeth B.
Craighead 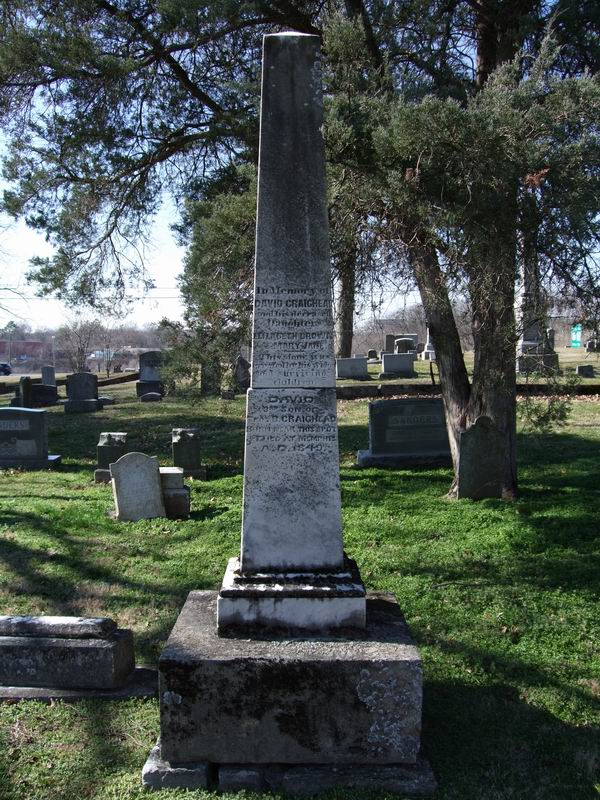 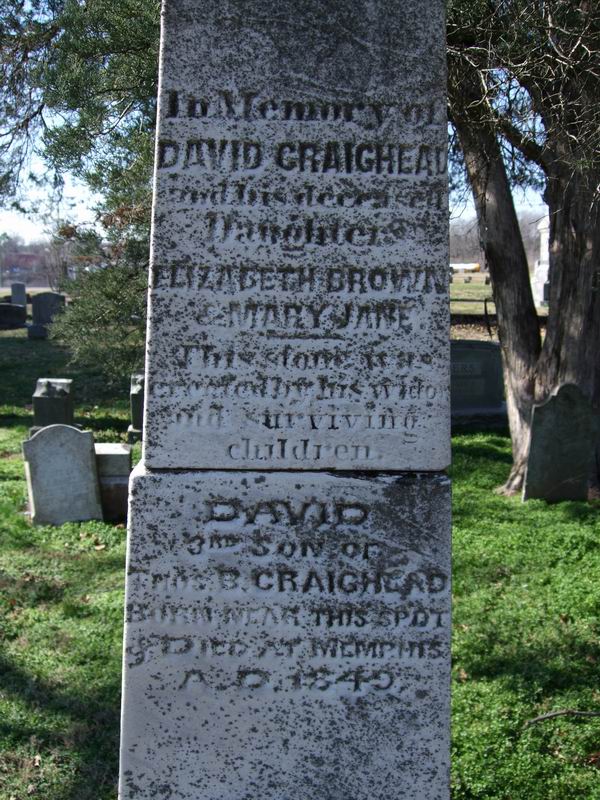 In Memory of
David Craighead
and his deceased
daughter
Mary Jane
This stone was
erected by his widow
and surviving
children.
David
3rd son of
Thos. B. Craighead
Born Near This Spot
& Died At Memphis
A.D. 1849