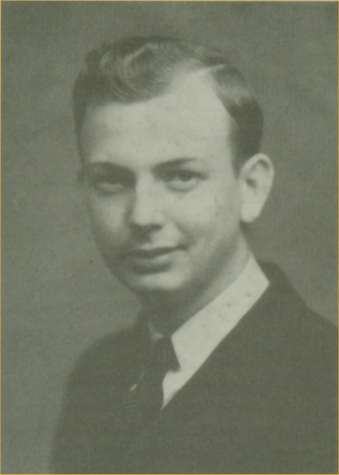 Biographical Sketch On The Life Of George W. DeHoff

George W. DeHoff was born September 20, 1913 near Vanndale, in Cross County, Arkansas. His parents were Orville Orson and Adah Gaskins DeHoff. His father died December 6, 1919, when George was six years old. His mother was left to raise George and his two sisters, Bertha Mae and Mary Ann, during the Great Depression. They never went without food, clothing or shelter. Before entering school George had learned to read, and had read many of the books of the King James Version of the Bible. At the age of nine, George contracted Typhoid. His mother later married Daniel Edward Casselman. George had other brothers, an older half-brother from his mother's previous marriage, Ollie Ripley Guthrie, and two younger half-brothers, James C. DeHoff and John W. DeHoff. (Note: James and John took the name of DeHoff after their mother's broken marriage with Mr. Casselman). In 1926, George grew one-half acre of peanuts on the farm as a 4-H project. At the ages of fourteen and fifteen he wrote articles for the local Sun Times, Lake City, Arkansas.

In his earliest memory young DeHoff remembered the preaching of Leonard H. Fielder, W. Curtis Porter, H.D. Jeffcoat, Joe Taylor, Joe H. Blue, and others. He attended the Mangrum Church of Christ, Lake City, Arkansas. At the age of 13 he heard Leonard H. Fielder preached on, "What Must I Do To Be Saved?" While the congregation sang, "Are You Ready For The Judgment Day?" he walked down the aisle to make the Good Confession. He was baptized the same hour of the night in Cockle Burr ditch, a mile and a half south of Black Oak on the last Sunday in August, 1927.

At the age of 15, a neighbor shared a copy of an issue of the Gospel Advocate with young George. In it were advertisements for Freed-Hardeman College and David Lipscomb College. He wrote to N.B. Hardeman at F-HC and H. Leo Boles at Lipscomb explaining that he would like to attend, but had no money. He expressed a will to work his way through school. Both wrote back declining admission without being able to pay. In addition, high school training was not offered at either institution. He also found an advertisement for Burritt College who was willing to make arrangements for the attendance of the young man. He attended Burritt College between 1929 and 1933. While at Burritt he made many life-long friends, and preached throughout the area.

In the summer of 1933 DeHoff enrolled at Harding College, Morrilton, Arkansas campus. While there he sat at the feet of L.C. Sears, J.N. Armstrong, B.F. Rhodes, and L. E. Pryor. The next year the campus moved to Searcy, Arkansas. In the summer of 1934 DeHoff enrolled at Freed-Hardeman College, Henderson, Tennessee. There he came under the influence of N.B. Hardeman, L.L. Brigance, W. Claude Hall, and C.P. Roland. A brief time was spent during his junior year at William and Mary, Norfolk campus where he studied English, History & Philosophy. His senior year was back at Harding where he roomed with James D. Bales. He received the B.A. degree at the end of the 1937 school year. He later received the M.A. degree at George Peabody College in 1952.

DeHoff wrote for numerous journals such as: Gospel Advocate; 20th Century Christian; and Christian Magazine. During his lifetime he wrote many books, a list of which is below.

In the late 1940s DeHoff was invited to teach ministry courses at Freed-Hardeman College, by N.B. Hardeman. In 1948 Hardeman named DeHoff Vice-President of the College in view of becoming the man who would take the place of N.B. Hardeman as president. Due to unforeseen circumstances, Brother Hardeman left the presidency due to struggles within the college. A lack of support from the Board of Directors excluded DeHoff from contention for the presidency, ultimately bringing about his resignation. In 1957, the DeHoff family moved to Albion, Idaho where George became the president of Magic Valley Christian College. He stayed there until April, 1964.

Gospel Meetings were a main evangelistic tool in the life of George W. DeHoff. He preached meetings in thirty-eight states. According to an inscription on his grave headstone, he baptized 10,556 people in his lifetime. At one time he was recorded in Ripley's "Believe It Or Not" as having baptized more people than any other person his age in the world.

He also was a debater. November 27-29, 1936 he conducted a four-session debate with C.B. Head over methods of teaching classes. Could classes be divided? And, could a woman teach a class for children? Head argued that the divided classes where DeHoff preached lead the church into apostasy and was subject to disfellowship.

June 1-4, 1954 DeHoff debated Leroy Garrett in Nashville, Tennessee over "located ministers" and "mutual ministry." It was a tent gathering with large crowds at every meeting. One interesting story connected with this debate was concerning a comment made by Leroy Garrett concerning the Gospel Advocate. He expressed that he noticed that no one from the Gospel Advocate was in attendance at the debate to give support to DeHoff and his views. Little had he known that the editor of the Advocate, B.C. Goodpasture, had entered the tent after everyone had arrived, taking a seat in a folding chair at the back of the assembly. Upon Garrett's comment, Goodpasture arose, folded and carried his chair and walked down the aisle toward the podium. He opened his chair and placed it just behind DeHoff, showing his, and the Gospel Advocate's support. This was not only seen by Garrett, but by all in attendance.

About 1950 DeHoff began a daily 15 minute radio program on WGNS, Murfreesboro, Tennessee. Very soon after beginning his sessions, Charles Holt of Franklin, Tennessee, purchased time on the air after DeHoff attacking he and the East Main Church where he preached over their support of orphan homes from the church treasury. A verbal debate over the airways ensued as a result. DeHoff used a great deal of wit and wisdom in answering whatever Brother Holt presented.

In 1951 DeHoff debated W.D. Davis, a prominent Primitive Baptist. In this debate DeHoff exposed the errors of the five fundamental teachings of Calvinism. The debate was later printed by DeHoff in December, 1982. In 1975 he held a debate with Lionel Barrett, a Nashville attorney, over the use and legalization of Marijuana. The debate was held on the campus of Middle Tennessee State University. Over four hundred people attended the debate. In it DeHoff presented medical and scientific facts against the use of Marijuana. Later a book recording the debate was printed in 1983.

In 1971 and in 1977 George W. DeHoff served as a delegate in the Tennessee Constitutional Convention. In the 1971 convention he helped pass laws preventing the taxation of bank accounts, certificates of deposit, and insurance policies. He was vice-chairman of the Public Information and Elections Committee that helped to bring the above mentioned proposed law to a referendum. It became law January 31, 1973. During the 1977 convention he helped lead a fight against those who were trying to bar preachers from state political office. Later, DeHoff served as a delegate to the 1976 Democratic National Convention in New York.

Through the years, George and Marie supported themselves through the operation of a Printing Company and bookstore. The bookstore operates to this day in Murfreesboro, Tennessee. It was a mainstay of support to the DeHoff family the later part of their lives. He spent the last years of his life printing and selling books. Many preachers came and visited him at his bookstore, including your webmaster. It was my pleasure to have known this great old soldier of the cross. George W. DeHoff passed from this life January 1, 1993 in the 79th year of his life. He was buried in the Evergreen Cemetery in Murfreesboro, Tennessee.

-Most of the above sketch are excerpts from "I See My Time Is Up," DeHoff's Autobiography. DeHoff Publications, Murfreesboro, Tennessee, 1989. 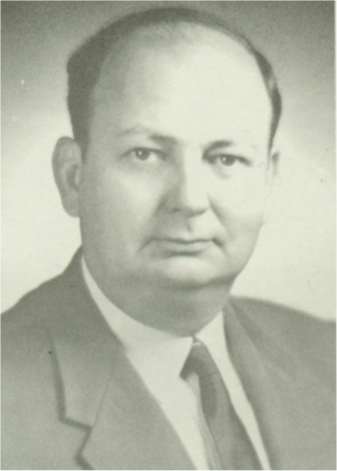 Directions To The Grave Of George W. DeHoff

George W. DeHoff is buried in the Evergreen Cemetery In Murfreesboro, Tennessee. From I-24 take Exit 81B, Hwy. 231, and head toward the city center. You will be on S. Church Street. Go about two miles into the city center and turn right (east) on Vine St. Go 4/10ths mile and turn left on S. Highland (after one block it will become N. Highland) and go 4/10ths mile and turn right on Greenland. Travel 3/10ths miles on Greenland and enter the second entrance to the Evergreen Cemetery to your left (North). Go past the first intersection. You will see Forest Hill Section to your right. (I.C. Pullias is buried in this section.) Continue through the next intersection then follow the road as it bears to the right and goes toward the rear of the cemetery. When you get to the next big section of graves begin looking to your left (west side of street). If you get to the end you've gone too far. It is only a couple of headstones in, and the headstone is a pretty good size in comparison to the others around it. 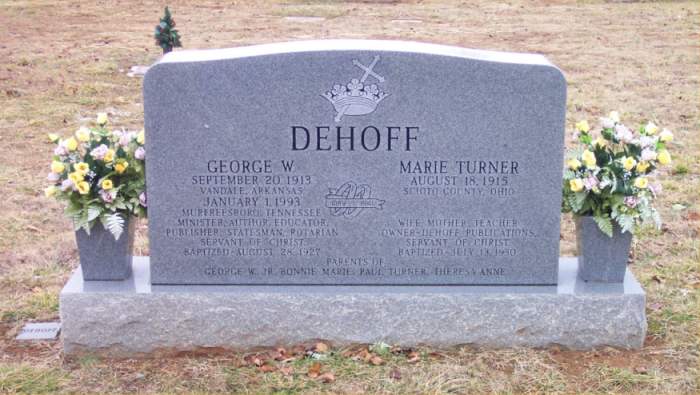 "I Have Fought A Good Fight. I Have Finished My
Course. I Have Kept The Faith. Henceforth There
Is Laid Up For Me A Crown Of Righteousness, Which
The Lord, The Righteous Judge, Shall Give Me At
That Day, And Not To Me Only, But Unto All Them
Also That Love His Appearing" II Timothy 4:7-8
-The Apostle Paul's Valedictory-

Daughters Of The Revolution 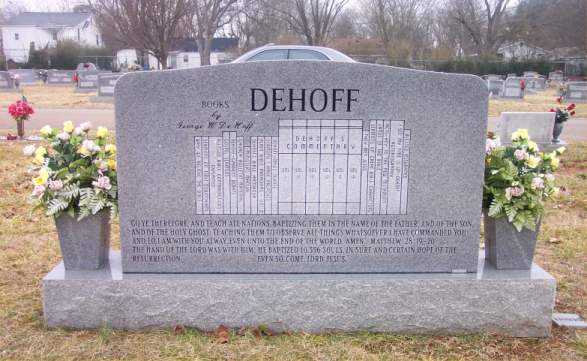 "Go Ye Therefore, And Teach All Nations, Baptizing Them In The Name Of The Father, And Of The Son
And Of The Holy Ghost. Teaching Them To Observe All Things Whatsoever I Have Commanded You:
And, Lo, I Am With You Alway, Even Unto The End Of The World. Amen" Matthew 28:19-20
The Hand Of The Lord Was With Him. He Baptized 10,556 Souls. In Sure And Certain Hope Of The
Resurrection "Even So, Come Lord, Jesus" 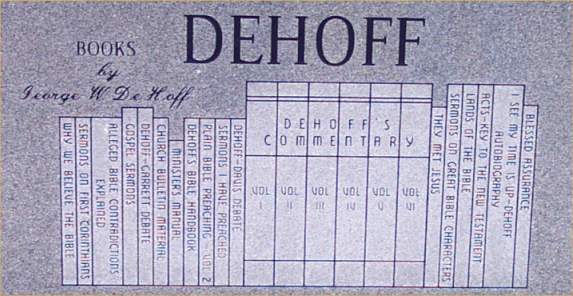