Biographical Sketch On The Life Of W.H. Dixon

In the study of men we are often caused to wonder at the simple elements of character which have enabled them to be successful. Sometimes, in evaluating traits of character, we place a higher estimate on some of the acquired characteristics than should be placed, while we place too low an estimate on some seemingly insignificant traits. Man does not know how to estimate greatness; man does not know the elements of true greatness; hence the mistakes in our estimation of people. The subject of this sketch is an illustration of this principle.

W. H. Dixon was born on December 8, 1839. His parents were good, honest, hard-working people. They lived in Marshall County, Tenn. Brother Dixon grew to manhood in the simple rural conditions of that community. He had no advantages of what the world now calls "culture" or "education." The gospel was preached in his community by an uneducated man, and Brother Dixon accepted it with all the power of his soul. He was sixteen years old when he learned the truth and was baptized into Christ, in August, 1857.

When the War between the States was declared and a call in the South for volunteers was made, young Dixon responded and began training as a soldier in carnal warfare. He did not get to take advantage of the few opportunities for education that his rural section of the country offered at that time. He worked hard to help support the family until the Civil War began, and then he had no further opportunities for an education. As a soldier, he never forgot that he had enlisted in the army of the Lord; so he lived faithful to the Lord as best be could for four years as a soldier. At one time he was taken prisoner and kept in prison for some months. While a prisoner of war he promised himself and vowed to God that if he was released from prison and was spared to the close of the war he would preach the gospel. Soon after he was released he began preaching. His first public talk was a failure in the judgment of all who heard him. He was so embarrassed and excited that he could not quote his Scripture text, neither could he find it in the Bible in order to read it. His mother prompted him by speaking out in the meeting and telling him where to find it. Even after he had attempted to preach the third time he was so discouraged and mortified at his failure that resolved not to try it again. Old Brother Darnell, who had baptized him and who had heard his third attempt to preach, encouraged him by saying: " When I am gone, you will be a preacher." This greatly encouraged young Brother Dixon, and he resolved never to quit trying to speak in the name of his Lord.

The prophecy of the old brother came true, and Brother Dixon preached the funeral of Brother Darnell.

Brother Dixon had been preaching about two years when he was called in 1868 to fill an appointment for Brother Randolph in Fayetteville, Tenn. At the close of his sermon that day a brother, Allen Taylor, of Cyruston, Tenn., said to him: "I want you to come to my neighborhood and preach that sermon." Brother Taylor lived about nine miles from Fayetteville. Brother Dixon went and preached the sermon. There was a large audience present, but Brother Taylor was the only Christian in the community. Brother Dixon went again and again to Cyruston, and finally established a congregation there. This is only one instance of many similar cases. Brother Dixon soon began to have more calls than he could fill. He went into the far rural communities and preached the simple gospel to an honest people. He always found hearts anxious to know the truth and willing to obey. He did the most of his preaching within a small radius of his home. At one time he held a meeting at Cane Creek, his home church, and baptized more than a hundred people. There are some few still living who remember the great work of this earnest, simple, kind-hearted gospel preacher.

It is astonishing to know how much work was done by this gospel preacher. During his life as a preacher he established twenty-eight congregations within a short distance of his home, in Marshall County and in Giles County. When we think of Brother Dixon without any means, without any education, and without any training as a public speaker, we are caused to wonder why he could go into communities, which were prejudiced against the church of our Lord and establish so many congregations. Many have wondered as to the secret of his power. Some preachers labor a lifetime now and are never able to establish one-fourth the number of congregations that Brother Dixon did. Many preachers with far better education, with all the prestige and influence of culture, now, cannot do one-half what Brother Dixon did. Brother Dixon loved the truth of God and yearned for the salvation of souls and told the sweet story of the cross to honest-hearted people with such earnestness and fervor that they received it with gladness.

The work of this humble man, poor in this world's goods, whose educational advantages were meager, shows us that the power for converting the world is not in man nor in the embellishments of classical or worldly education but in the gospel of Christ. Brother Dixon went among the poor with ease, as be was one of that number. Frequently he would be entertained in their cabin homes, where one room answered the purpose of kitchen, dining room, guest chamber, and sleeping room for family and guest. Brother Dixon, like many other gospel preachers, preached the gospel because he loved the Lord and his truth, and his simple life lived among them gave emphasis to his sermons. They all knew him, and they knew that he was preaching for the sake of souls and not for money; they knew that he practiced what he preached, and they had confidence in him.

Brother Dixon was not a logical speaker. His sermons were not systematically arranged, but what they lacked in logic and system was supplied with fervor and zeal. Logical sermons with poetical adornment and classical embellishment would not have reached the hearts of the simple but honest folk who listened to his sermons. He was the right man in the right place among the common people; and the common people, as in the days of our Savior, heard him gladly. Strange as it may seem, most of the pioneer preachers of the gospel have been what the world calls "uneducated" men. Few men have done more good in a small area than did Brother Dixon. When we think that he established twenty-eight congregations and baptized thousands of people, we say, what a monument he has erected for himself! Among the number that he baptized was our own F. W. Smith, who was loved by all for his work's sake. What a successful life Brother Dixon lived! What a great man he was!

Brother Dixon died on November 25, 1905. He was stricken with apoplexy at home with his wife, becoming completely unconscious suddenly and dying in a few hours without ever regaining consciousness. He died in a short distance of the place of his birth. His body was taken to the Cane Creek meetinghouse, where he had so often assembled with others around the Lord's table, on Lord's Day morning, and after the worship that morning Brethren Little, Leonard, Hart, and Hardison spoke words of tribute to his memory and encouraged the Lord's people who loved him, and then the body was laid to rest in the cemetery near the place of worship.

I did get some more accurate information regarding W.H. Dixon. W.H. Dixon was actually H.A. Dixon's great uncle. W.H. was the uncle of H.A. Dixon's father, Albert Lee Dixon. Albert Lee died at age 49. H.A.'s mother was Mary Cordelia Dixon. They had two sons: H.A. And Floyd Vernon and two daughters: Edith Dixon Morris, and Christine Dixon Voorhies. I do not have a record of Albert Lee preaching. I do know he led singing at church and taught singing schools. H.A. started his work as a song leader at Union Ave. Church of Christ in Memphis where he worked with G.C. Brewer. I do not know what W.H. Stands for but my dad says that he was known by some as "Billy" which indicates that it probably stood for William. The "H" might stand for Hubert which was my grandfather's first name. According to my family history Pinckney Dixon was the father of Albert Lee Dixon and grandfather of H.A. Pinckney was the brother of W.H. Dixon. Pinckney also had a son (Jim) who later taught at Pepperdine. W.H. and Sarah had four children: Edgar (1877), Mary Eliza, Elura, and Emma (1872), who lived only two years. The parents of W.H. Dixon were Matthew Dixon (1817-1878)and Susan P. Talley(1821-1891). They were members at the Cane Creek Church of Christ in Marshall County (Petersburg). They connect my mother and father's families by marriage. My mom and dad are actually distant cousins! I can go back one more link to Henry Talley who would be W.H.'s grandfather (1778-1862. He was an elder at Cane Creek and originally came from Virginia.

-Thanks To Tom Dixon For Providing This Information October, 2006

Directions To The Grave Of W.H. Dixon

The final resting place of W.H. Dixon is located very near his home church of Cane Creek in the southern part of Marshall County, Tennessee. On Hwy 431 south of Shelbyville and north of Fayetteville, Cane Creek lies just about a mile north of the small community of Petersburg. When you see Cane Creek Church of Christ you will turn left on the road just next to it (Hwy 129W) and go 1.1 miles to Talley Cemetery on your left. Go into the gate and look to the immediate right. Count nine rows in. Dixon's grave is the third one in from Hwy 129. Sarah, his wife, is the second, next to her husband. The actual GPS location of the grave is: 35°19'42.7"N 86°40'56.6"W / or D.d. 35.328522,-86.682378 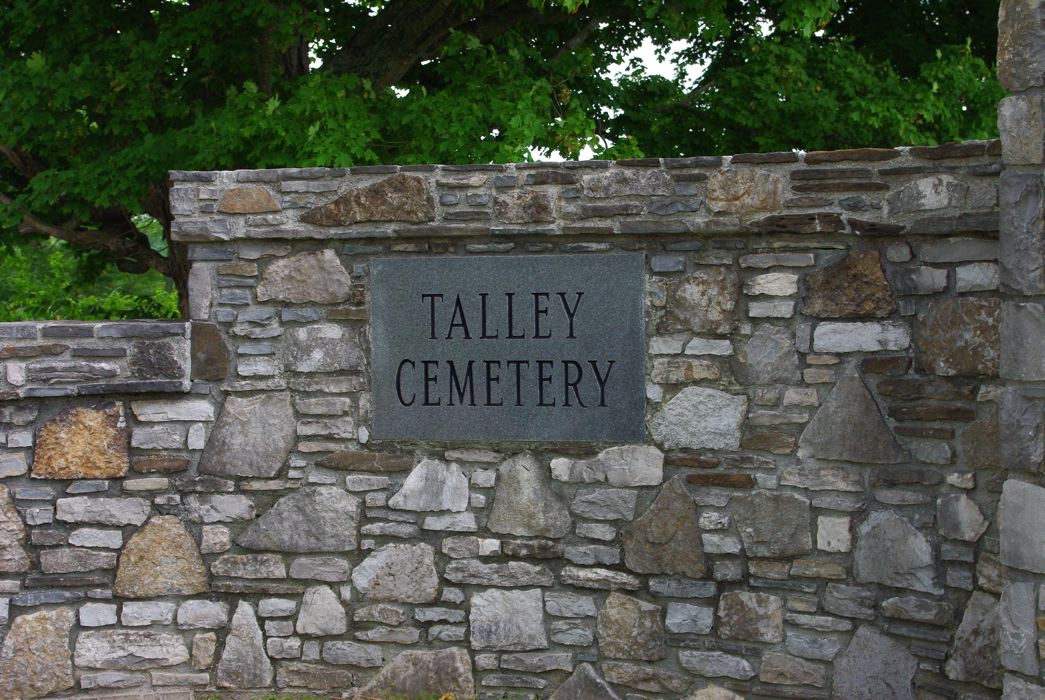 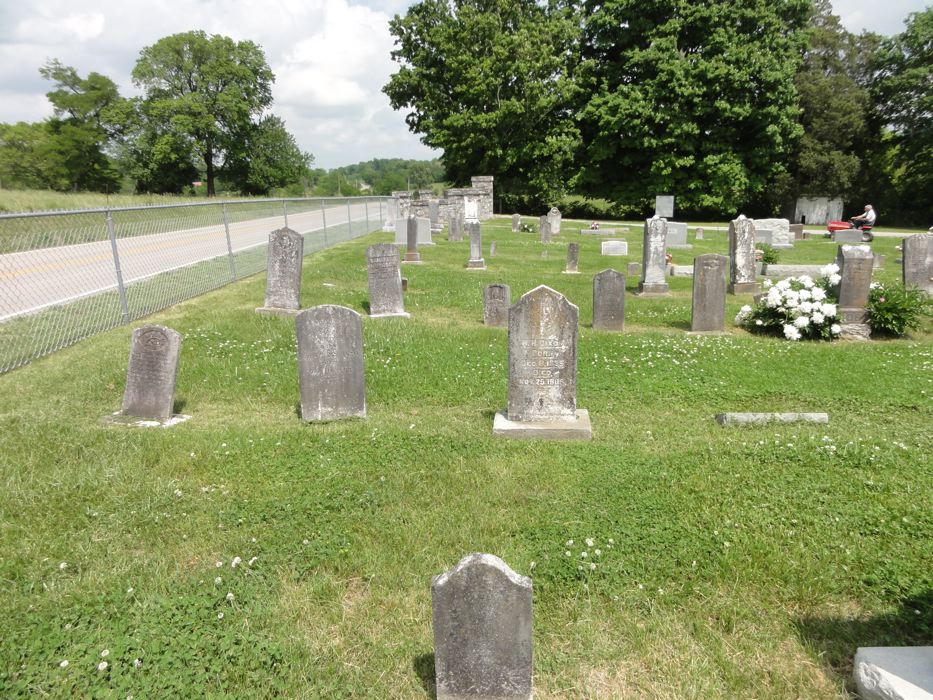 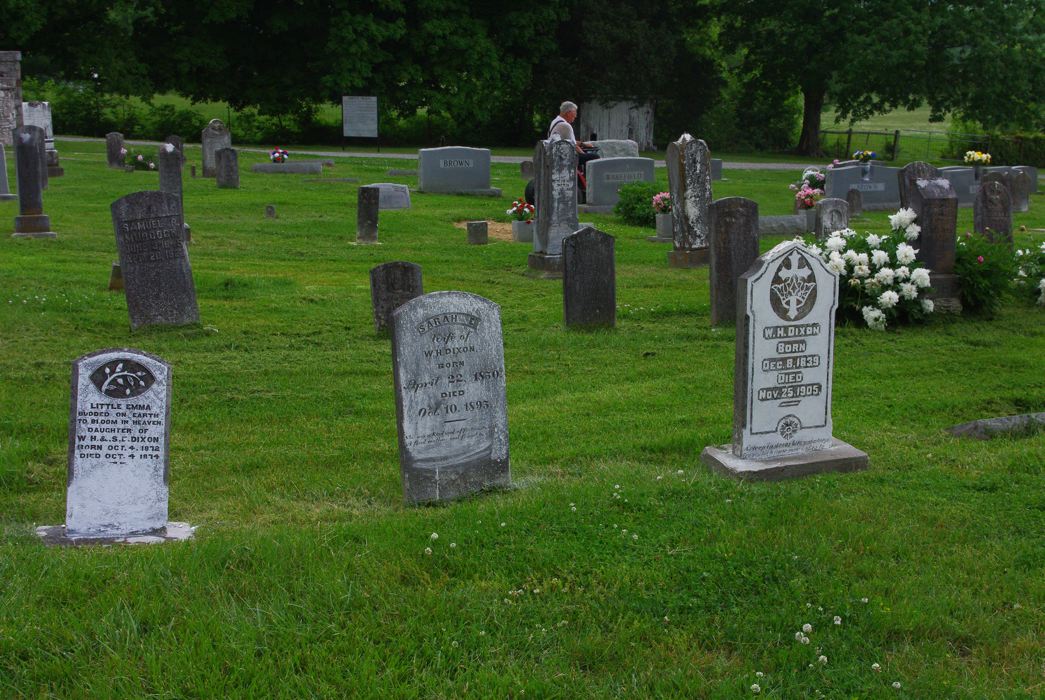 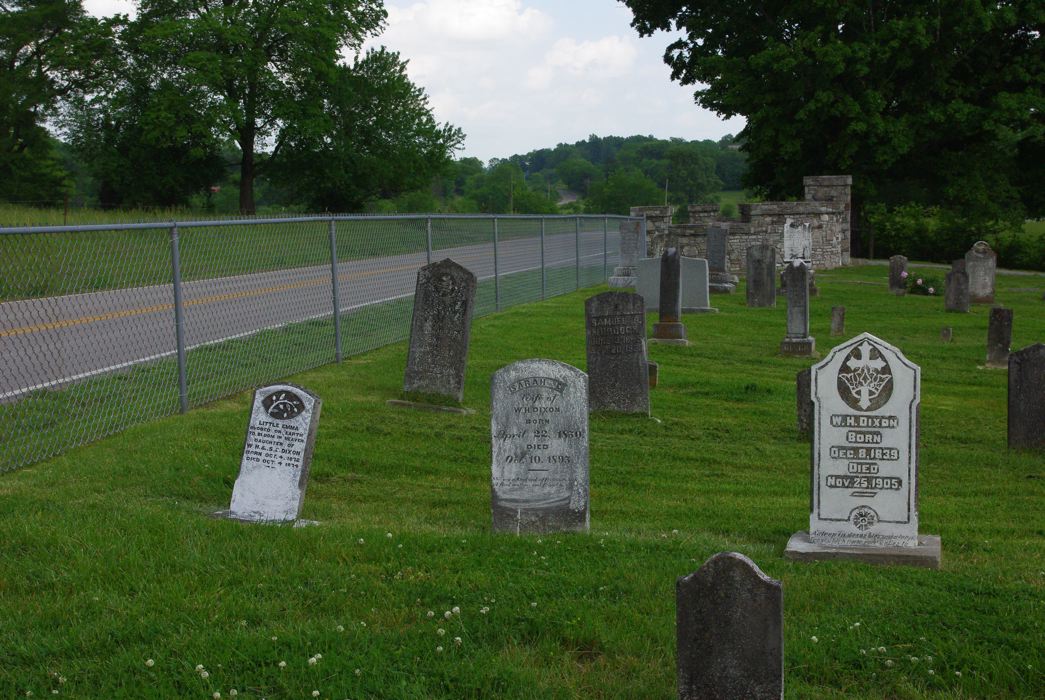 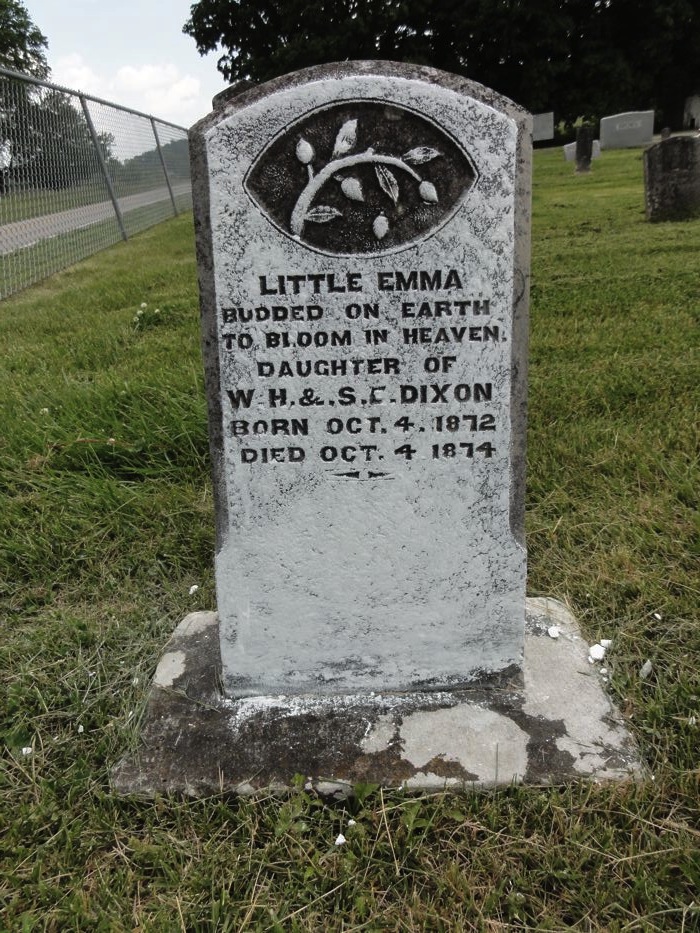 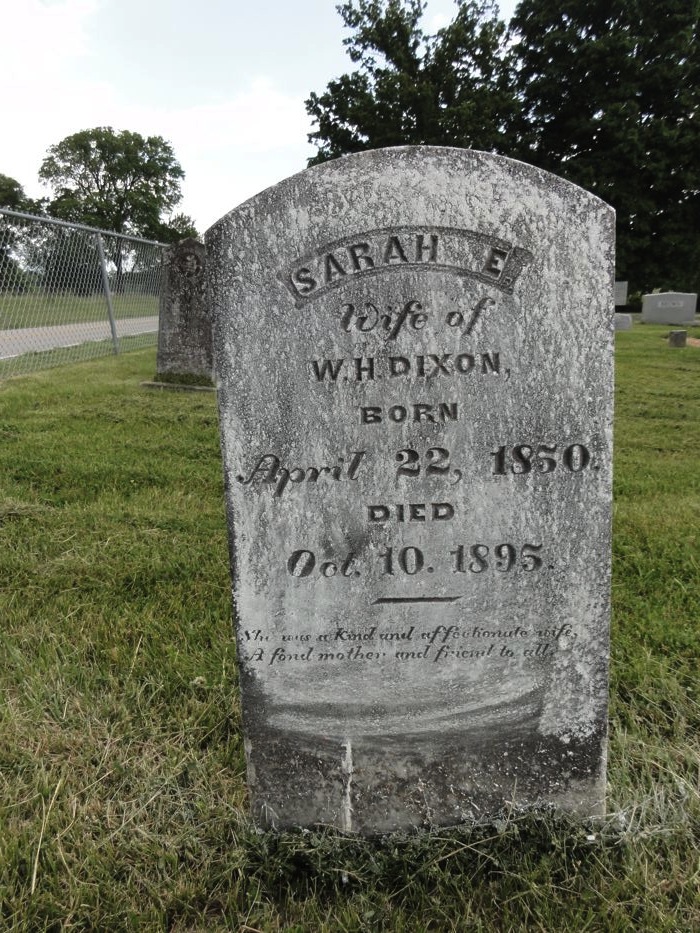 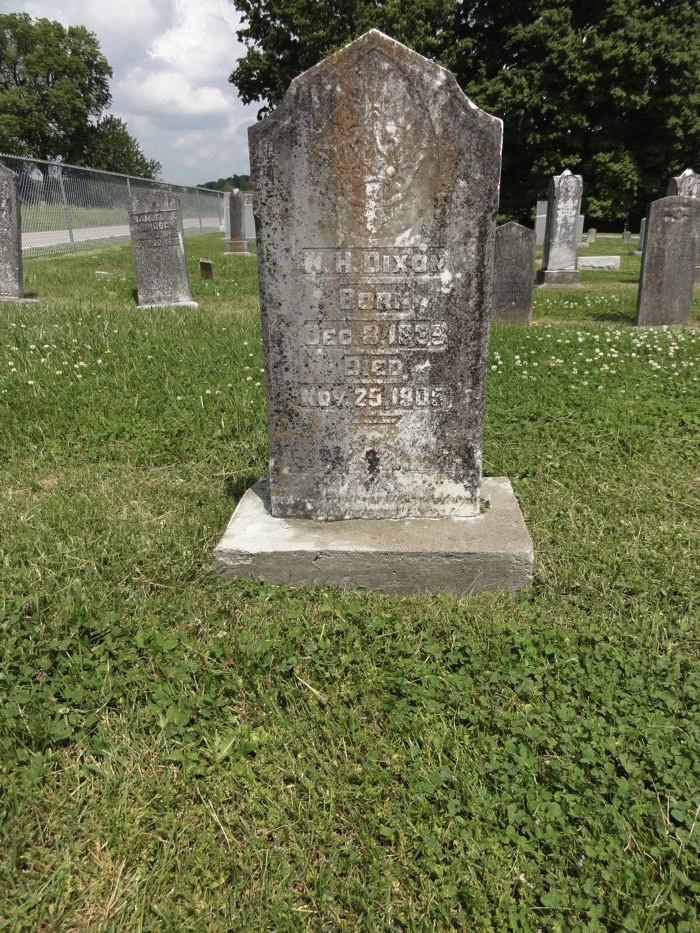 W.H. Dixon
Born
Dec. 8, 1839
Died
Nov. 25, 1905
Asleep In Jesus Blessed Sleep
From Which None Ever Pauses To
Weep A Calm And Undisturbed
Repose Unbroken By The Fist Of
Foes 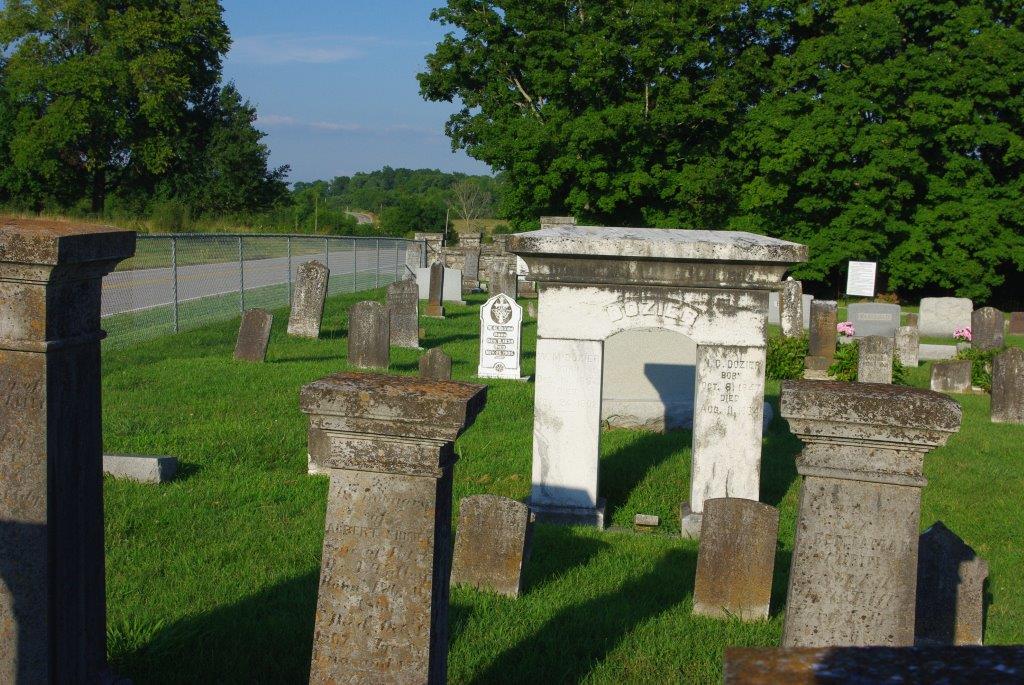 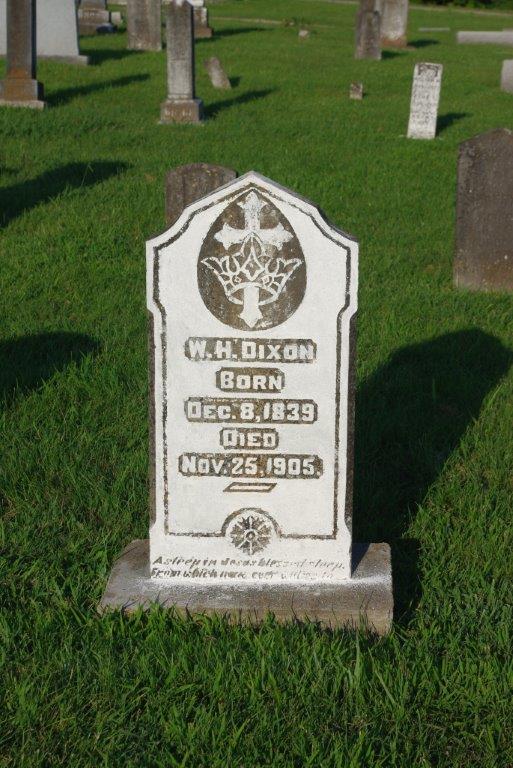