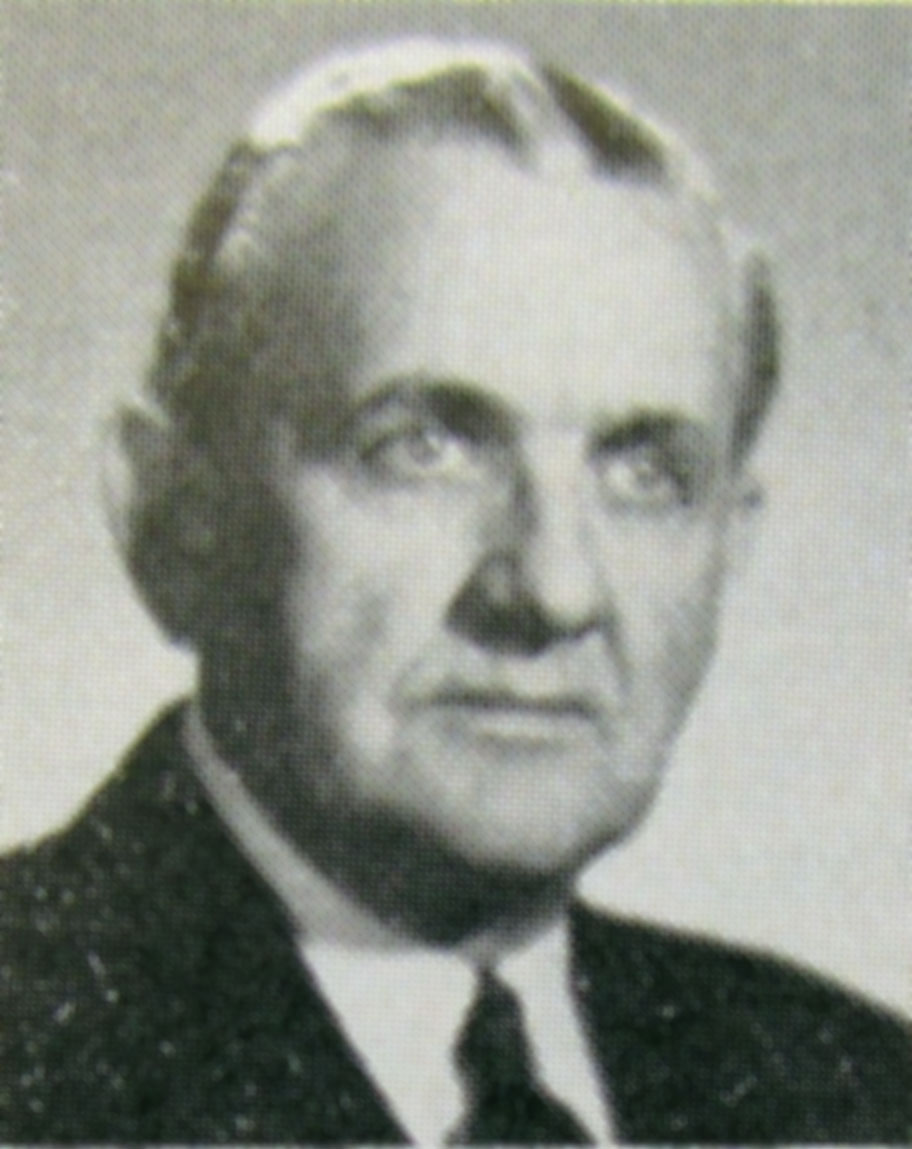 Emerson J. Estes
A Legend In His Own Time

From a background including his being a manager of an insurance company, and working in the funeral business, emerges a “giant” among the preachers and leaders of this generation. Emerson J. Estes was born June 17, 1903, in Tippah County, Mississippi. He attended the schools of his day, and later he studied at the Montgomery Bible College (which is now Faulkner University), in Montgomery, Alabama. However, his formal training was only a part of his education. He is exceedingly well educated in “life’s experiences.”

Brother Estes became a Christian in 1923. He has now preached for sixty-four years. From the time of his first sermon until the present, he has preached “The Old Jerusalem Gospel” in a most effective manner.

He has preached the gospel to thousands and he has converted hundreds of people to Christ. He has preached in twenty-five states, Canada, and the Bahamas. The phenomenal success of his preaching can be explained only on the ground that his sermons are sound, fearless and scriptural. Through the years, he has been in great demand and seldom has one man preached to so many over such a long period of time. Brother Estes preaches “Jesus Christ, and him crucified” (1 Cor. 2:2). He knows that the gospel of Christ “is the power of God unto salvation” (Rom. 1:16). Therefore, he follows the instructions of the inspired apostle Paul to “Preach the word” (2 Tim. 4:2).

His command of the English language is marvelous indeed. His preaching is simple, yet profound. He opposes with all of his being those who would seek to corrupt minds, “from the simplicity and the purity that is toward Christ” (2 Cor. 11:3). He always preaches the truth. He both knows and believes the following Scripture: “For though I preach the gospel, I have nothing to glory of: for necessity is laid upon me; yea, woe is unto me, if I preach not the gospel!” (1 Cor. 9:16). He does not pervert the gospel of Christ, for he is well aware that those who do so, will bring a curse upon themselves (1 Cor. 9:16; Gal. 1:89).

Brother Estes has served as one of the Board of Directors for Montgomery Bible College, Childhaven Orphanage, and MidSouth Christian Nursing Home. In 1983, he was made an honorary Lt. Colonel on the staff of George Wallace, then the governor of Alabama. For years, he wrote articles for newspapers, and he also published a gospel paper entitled Way of Life for a period of four years.

He did his first full time preaching in Birmingham and followed that with preaching in Montgomery, Alabama. He subsequently became the first full time evangelist of the Getwell Church of Christ in Memphis, Tennessee, in which capacity he served for eight years. While working with Getwell, he began the Truth In Love radio program on WHBQ. This program is likely the oldest continuous radio program in the area. During his years as speaker, he received and answered hundreds, perhaps even thousands of questions about the Bible and what it teaches. On more than one occasion, he invited preachers who opposed what the Bible teaches to appear on his program. He allowed them to state their views, and then kindly, gently, but firmly, refuted their error. He conducted one of the most unique, interesting, and informative radio programs to which I ever listened and perhaps, one of the most unusual, and distinctive ever aired. Tremendous good resulted from brother Estes’ radio work.

Emerson J. Estes is of the “Old School” of evangelists. He believes the Bible and preaches it. Like William Jennings Bryan, he is “a silver tongued orator,” though he moves his audience to obedience, and action, through a sincere, fervent, earnest appeal to the Scriptures. He speaks “as the oracles of God” (1 Pet. 4:11). Sometimes reference is made to “a southern gentleman.” Brother Estes symbolizes that description, but more importantly he epitomizes a truly great “Christian gentleman.” His physical appearance is striking and commanding. He stands as erect as an arrow. His beautiful grey hair immediately attracts one’s attention. He has a wonderful sense of humor, and though he was ninety years old on June 17, 1993, his mind is alert, quick and active. This remarkable man still serves as the full time evangelist for the Merton Street Church of Christ in Memphis, Tennessee, and this he had done for many years. He also serves as one of the elders of the congregation.

Emerson J. Estes has been married for sixty-five years to Mildred Sams Estes. Through the years she has stood by his side, and has truly been a great “help meet.” Their two lovely daughters are: Mrs. Sylvia Estes Harville of Memphis, Tennessee, and Mrs. Wanda Estes Kindred of Burlington, Kentucky. Brother and sister Estes have three grandchildren.

When David was giving his final charge to Solomon he said, “Be thou strong therefore, and show thyself a man” (1 Kin. 2:2). The Poet wrote: Lives of great men remind us we can make our lives sublime, And departing leave behind us footprints on the sands of time.

The life of brother Emerson J. Estes is a most excellent example of the foregoing beautiful sentiments. Men of his type and character are far too few. We are made to wonder whether those of fewer years will measure up to the high standard set by his kind. To fail to appreciate such men while they live, and to perpetuate their memory after they are gone, would be an injustice, not only to such men, but to many yet unborn who may be encouraged and motivated by reading the stories of their lives. Emerson J. Estes is one of those great men, and it is our great, and exalted privilege to give, “honor to whom honor” is due (Rom. 13:7)!

Obituary From The Commercial Appeal

Emerson J. Estes spent 64 years as a preacher, working to bring unbelievers to Christ. His teachings didn't go unchallenged. In the mid-1950s, Mr. Estes started a radio program entitled Truth in Love, which still airs on Sunday mornings on WHBQ. He'd often invite religious leaders with differing points of view for discussion and debate, family members said. Mr. Estes died Wednesday of heart failure at Saint Francis Nursing Home. He was 97. A fall caused severe brain damage, forcing his retirement at age 92. He did not stop preaching simply because of his age, said his son-in-law David Richards. "He just wasn't able to continue." Born in Tippah County, Miss., Mr. Estes received his bachelor's degree from Montgomery Bible College (now Faulkner University) in Montgomery, Ala. "He was a man of dignity and a man who appreciated everybody," said his longtime friend Joe Baxter. "He was honest and an outstanding debater and gospel preacher." In 1923, Mr. Estes became a Christian and some time later started preaching full time in Birmingham. He moved to Memphis in 1952, where he became the first full-time evangelist for the Getwell Church of Christ. While at Getwell, Mr. Estes started the sometimes-controversial radio show. "Daddy would receive hundreds of letters a week," said his daughter Sylvia Richards. "He wasn't afraid to disagree with them." One time a man came down to the radio station and attempted to fight her father, who held tight to his Christian beliefs. She said that his philosophy toward people who argued with him was simple: "You may not agree with me but don't think of me as your enemy." Mr. Estes, who served on the board of directors for Childhaven Orphanage and Mid-South Christian Nursing Home, was named an honorary lieutenant colonel on the staff of then-Alabama Gov. George Wallace in 1983. His last preaching assignment was at Merton Street Church of Christ. In 1993, shortly after his 90th birthday, he told The Commercial Appeal "As long as I'm able I'll keep working. It's a great life." Services will be at 10 a.m. Saturday at Memorial Park Funeral Home. Mr. Estes , the husband of Mildred Estes for 71 years, also leaves another daughter, Wanda Kindred of Burlington, Ky., and three grandchildren. The family requests any memorials be sent to the Memphis School of Preaching.

(Obituary by Jasmine Kripalani, published in The Commercial Appeal 7/21/2000), as copied from Find-A-Grave.

Directions To The Grave of Emerson J. Estes

Emerson J. and Mildred L. Estes are buried in the Memorial Park Cemetery in Memphis, Tennessee. Take I-240 to Poplar Ave exit. Go west and the cemetery will be on your right. Enter the cemetery and take the first right toward the offices. You will come to a point where you turn right to go to the office, but stay straight. Take the second left and head down toward the mausoleums. Go to the entrance on your right and park in front of the first glass door you see on the right. Enter that door, and take your first left. Then take your first right. The Estes drawer will be on the left, three levels high, and the fifth from the end. Aisle 4 Tier C-13. The actual GPS location of the mausoleum where the Estes are buried is: 35°06'24.4"N 89°52'21.8"W / or D.d. 35.106772,-89.872712. 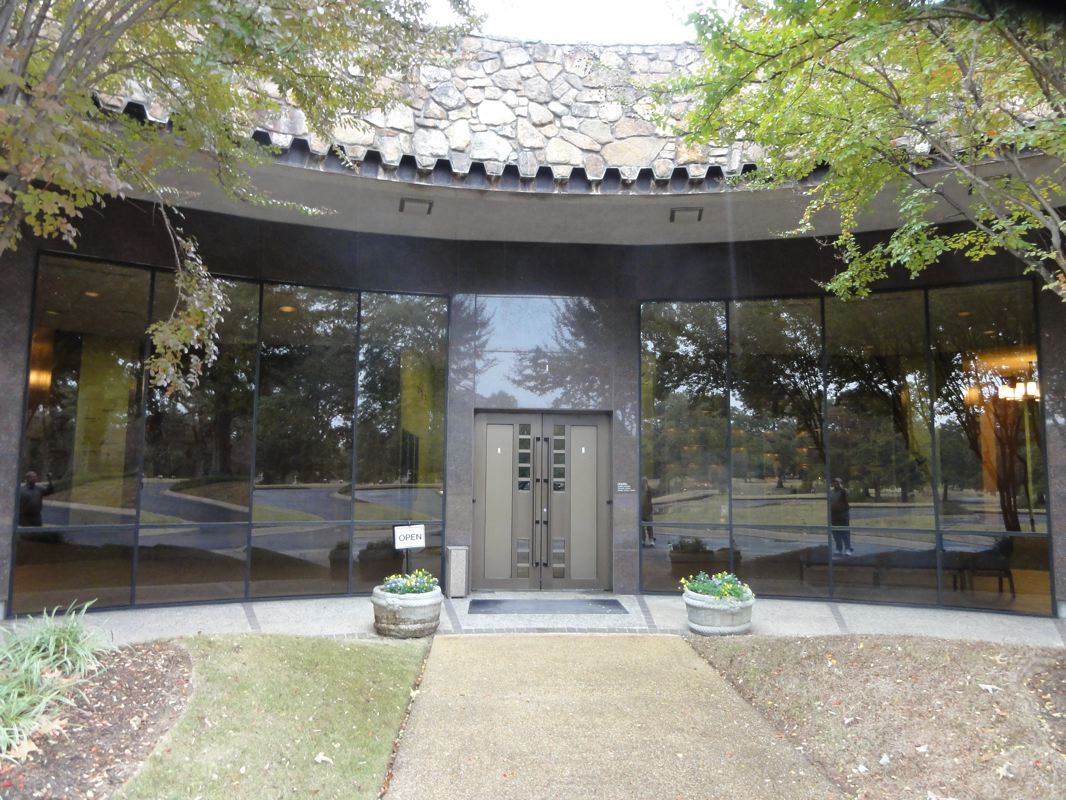 Main Entrance To Mausoleum - Enter to right, NOT HERE - See Below 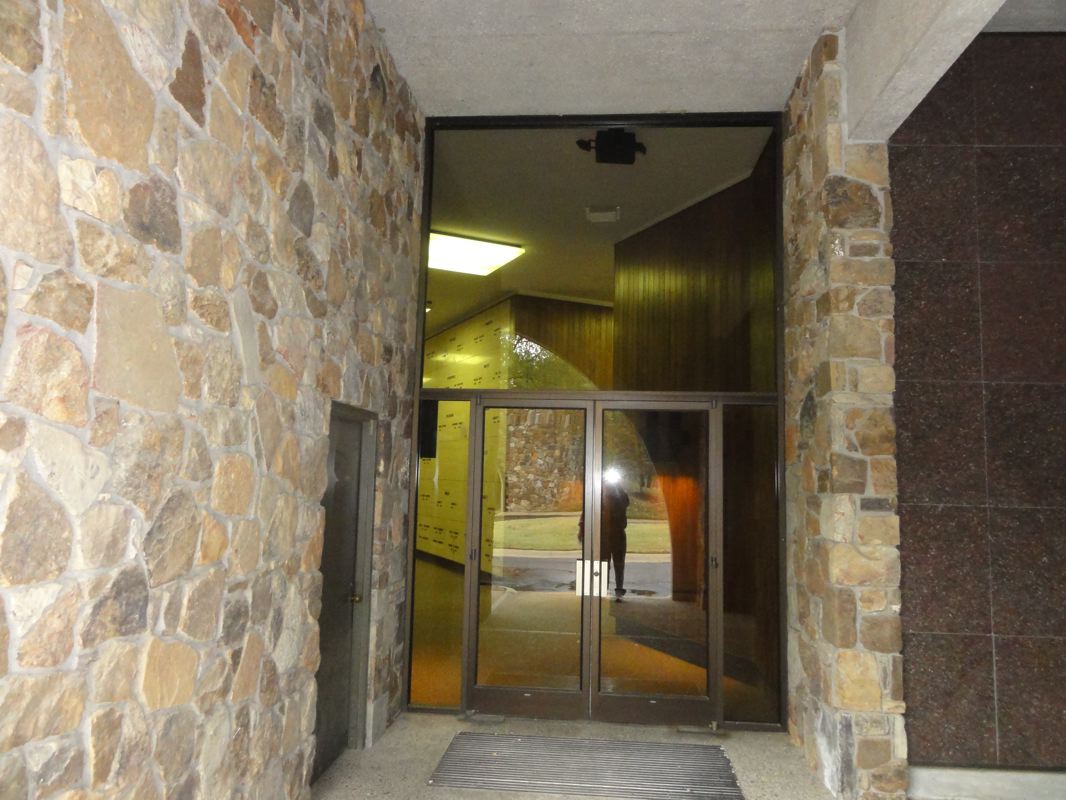 Enter Here. Take First Left, Then First Right. Then Look to the left 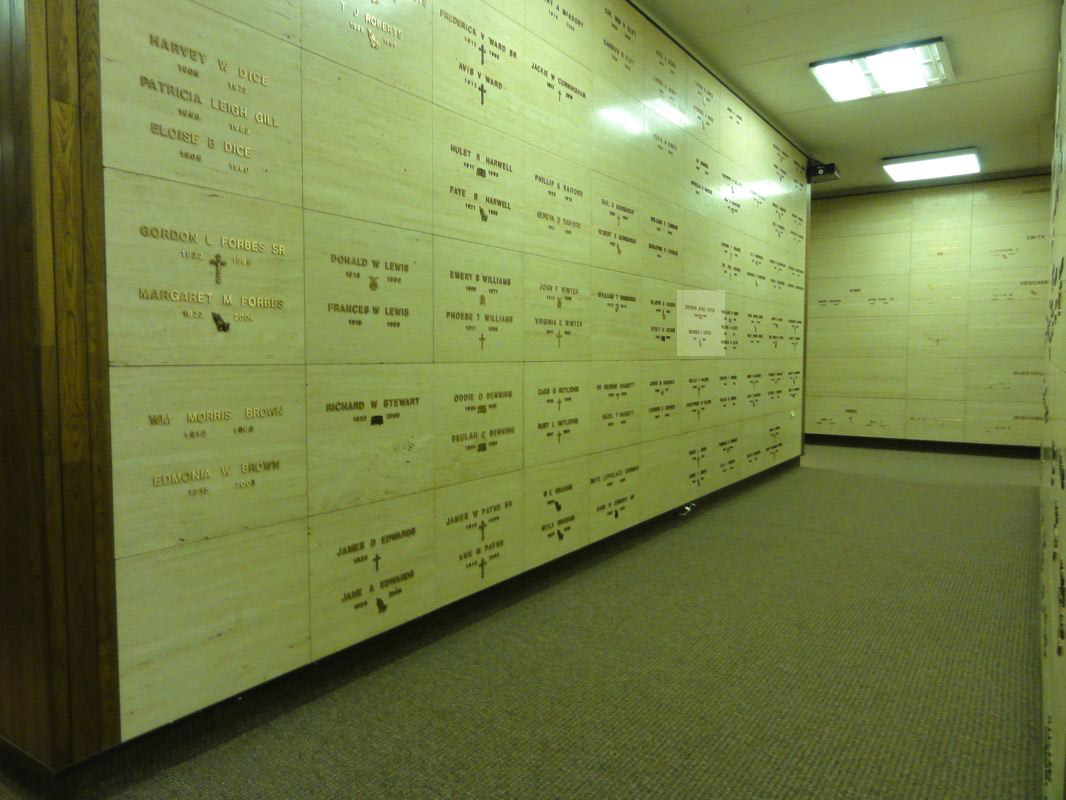 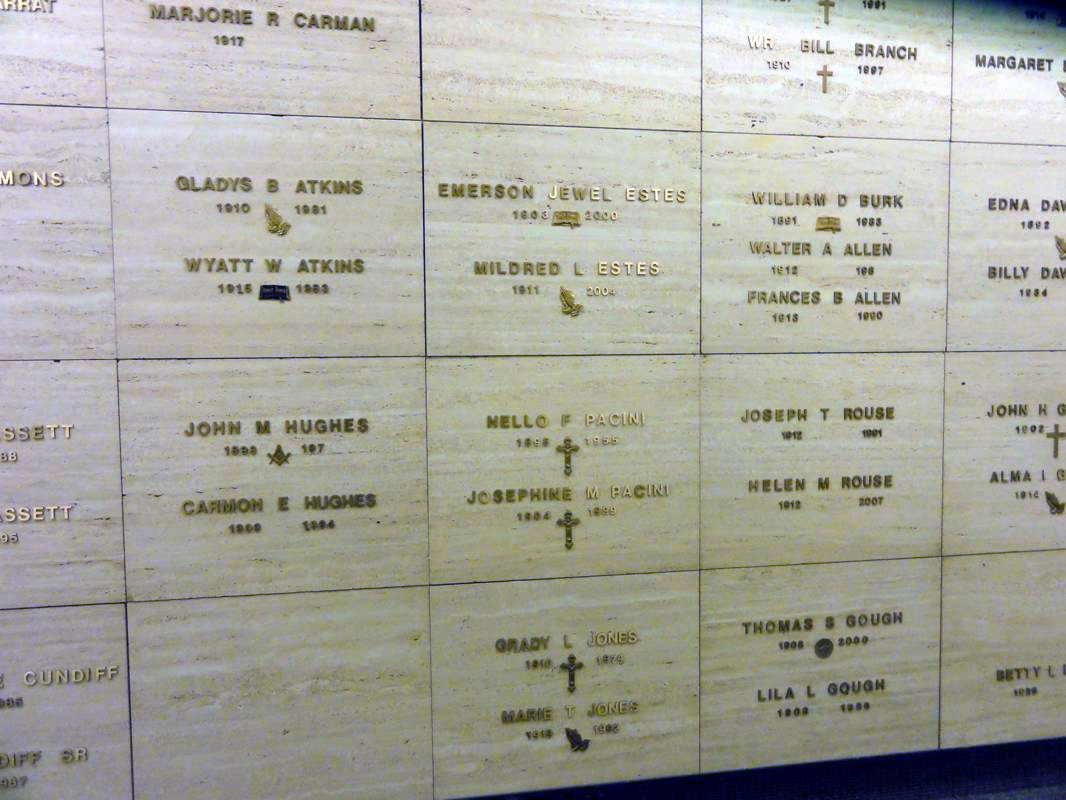 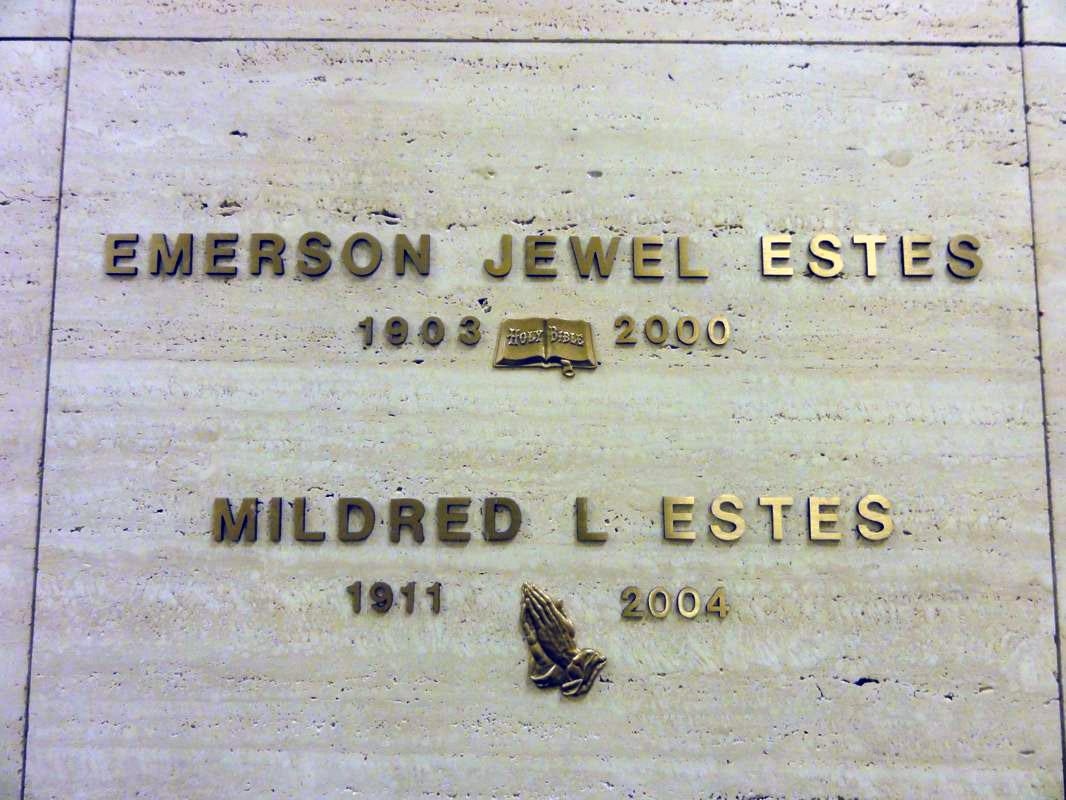 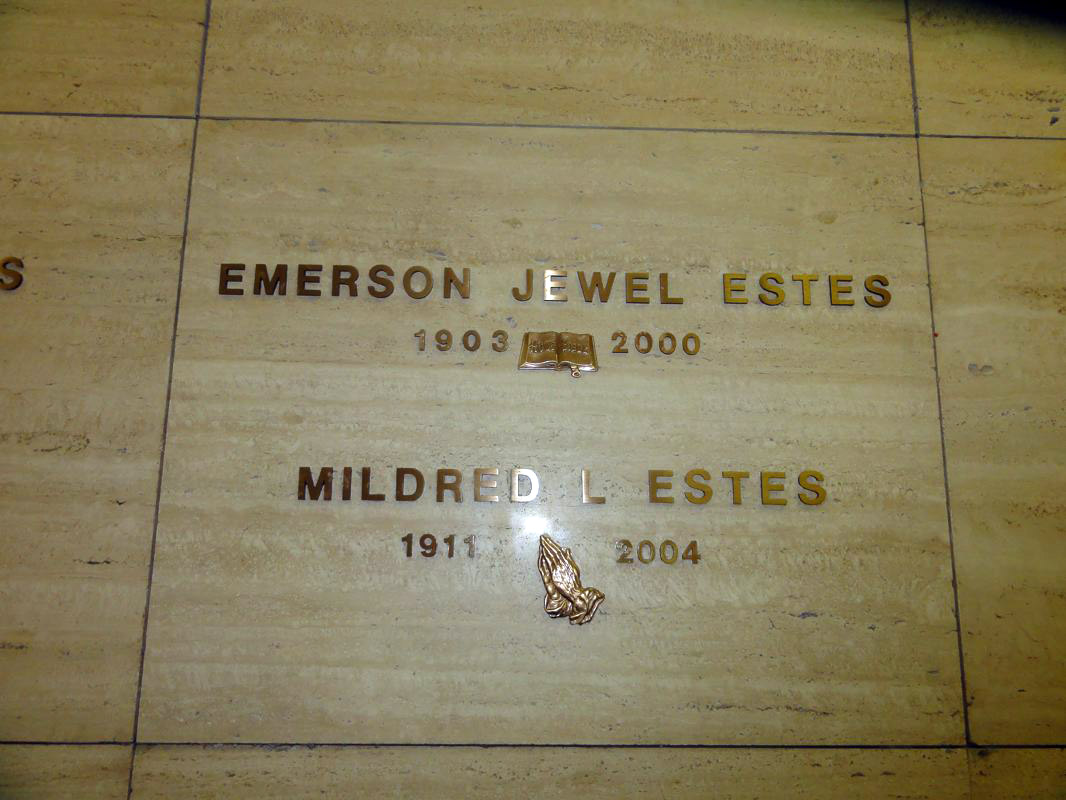