Biographical Sketch On The Life Of J.B. Inman

John Bunyan Inman was born in Robeson County, North Carolina, Dec. 5, 1850 and died June 7, 1889 in New Orleans where he had gone to labored with a congregation. He came with his father's family to McNairy County, Tenn. in 1856. He was trained up in the Presbyterian faith and was preparing for the ministry when he united with the Disciples, Dec. 27, 1876, under the preaching of the long lamented Bro. Knowles Shaw. He immediately took charge of the congregation at Henderson, Tenn. which position he held until few months before he started south in search of health, Dec. 5, 1888. He preached extensively and very successfully in North Miss., West Tenn., and in other places.

He was married to Miss A. L. Owen, Aug. 27, 1878 and to Miss Rhoda E. Carson Nov. 28, 1884. His wives were nice, cultivated, energetic, devoted Christians, and willingly lent a helping hand in his arduous duties.

What Bro. Inman regarded, as largely his life work was his connection with West Tennessee Christian College. He was the most prominent factor in the founding of this noble institution, which has done and is doing such a grand work in the cause of all causes. He was its faithful president from the beginning until the board accepted his resignation some time after he went south.

The trustees regretted so much to give him up, and were so very fearful of the bad effect of his leaving on the school, they induced him not to hand in his final resignation until quite a while after he had virtually given up the college work.

So far as institutions are concerned, West Tenn. Christian College was "The apple of his eye, the ideal of his heart." He often spoke of the institution and inquired after its welfare during his last illness. The many young gentlemen and young ladies who have gone out from this institution, that are now successfully filling the various stations of life can give us a faint ideal of the magnitude of his work.

His work will live long and well. The wave of influence started by this grand man will gather strength as the years go by; and the magnitude will never be known until it reaches eternity's shore and from its created bosom is gathered the many ransomed souls who are wafted home upon its swelling tide.

Certainly another of God's noblemen has fallen under the shadow of the cross, one who was true to his convictions as the needle is to the pole.

The Bible was his guide. The good of people his aim. I do not say he was faultless, but I do say I knew him twelve years or more, most of the time very intimately, and it will take one better acquainted with him than myself, to record many faults he had. The youth of this county never had many better friends than Bro. J. B. Inman. I have heard him so often say, "I feel a special interest in the young men." He never tired in instructing the young how to make a success in life. Comparatively few remained under his influence long who were not persuaded by his gentle, though decisive course, and powerful presentation of the truth to surrender to Christ and give their lives to his cause.

But O, brethren, my feelings beggar description. He is gone. He laid aside his mortal body, wasted by disease and over work to put on an immortal body. In him the cause of Christ has lost a brave defender, his wife a true and devoted companion, his sisters a kind and tender brother, his two little girls an affectionate father, many of us a faithful brother in the Lord, and the writer,..(two paragraphs unreadable)

How hard to think he is gone from his friends, who loved him with a heroic love! How hard it is to know that he is taken from the army in the midst of its triumphant march, whose doings and hardships he endured with the deepest pleasure! How hard to realize that he is removed from the cause he loved dearer than life! His life, though not long, is a ponderous volume of splendid deeds. How grand to think of the youths he has trained for the contests of life!

He has taken them in their tender and illiterate hours, and given them the bread of knowledge, and placed a brilliant star of hope in their intellectual firmament. And grander still it is to contemplate the great number of men and women the channel of whose life he has turned toward the Golden Gates. It will demand the final hour, o f the world's existence, to find the last pulsation of his splendid influence. No doubt, as in his last hours he would hear the break of the Atlantic waves, and feel its breezes on his wasting cheeks, he could also hear the waves on the eternal shore, and feel the zephyrs of life everlasting.

"A successful teacher and most faithful preacher. It afforded him great happiness to tell the sweet story of the Cross and win souls to Christ. His life, though short, was rich with good deeds. His death was triumphant, knowing that an abundant entrance awaited him in the everlasting kingdom." - J. Brown, Churches of Christ, 1904, p.616.

Inman began teaching at the Male and Female Institute (precursor to Freed-Hardeman University) in 1875, five years after it began. He had studied under Judge Byars at Covington, Tennessee for entrance to the Presbyterian Seminary at Clarkesville, Tennessee, to train for the ministry. In his study of Greek he learned from it that "bapto" meant to "dip." He became a member of the Christian Church under the preaching of Knowles Shaw. In March, 1877 the name of the school was changed to Henderson Masonic Male and Female Institute. In August, 1885, J.I. Galbraith, member of the Christian Church and editor of the Chester Observer, arranged for a new board of members of the church to purchase the school. The name was changed to West Tennessee Christian College. Inman became the first president of the school under that name. He held this position until his death June 7, 1889.

Directions To The Grave Of J. B. Inman

J.B. Inman is buried in the City Cemetery at Henderson, Tennessee. From I-40 in West Tennessee, take the Hwy 45 exit south. Go through the city of Jackson, and continue south about 15 miles to Henderson. You will be on the bypass in Henderson. Go to you come to Hwy. 100. Turn left and go to the next stop. Turn left on North Church St. Go about 100 yards and turn into the cemetery on the right. The cemetery will fork close to the entrance. Take the left fork and stop. Walk to you left and head toward the front of the cemetery. From the road there will be a line of two or three trees. Behind the trees you will see a row of very old and small graves. Inman will be second in from the south. Grave faces west. 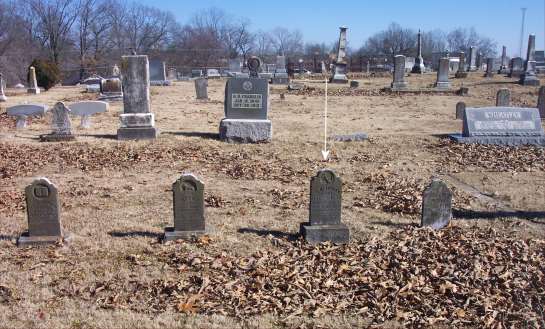 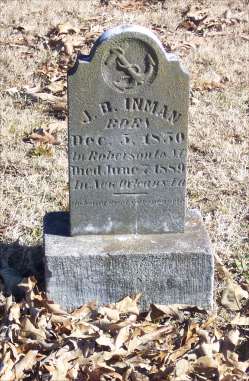