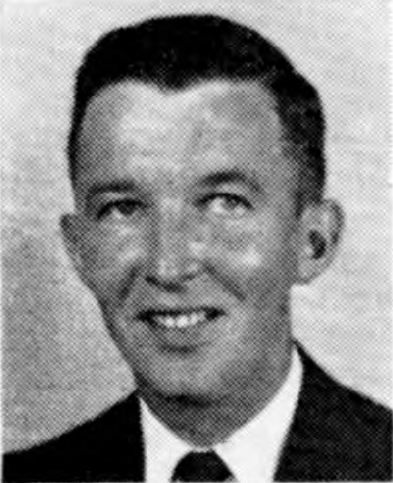 The Life And Work Of Paul Kidwell

Paul Thomas Kidwell was born on the 16th of October, 1946 in Soddy Daisy, Tennessee. He was married to Joyce Hixson September 18, 1953. To this union was born four children, Paul Thomas, Jr., Laura Annette, Brian Timothy, Mark, Nathan and Linda.

He attended Freed-Hardeman College, and began preaching in Liggins Springs, Alabama in 1951. Other churches he has served include the work in Athens, Tennessee from 1953-1956, Chicamauga, Georgia church from 1956-1957, and moved to Scottsville, Alabama in 1957.

He wrote the tract, "Is Christ Divided?" He was involved in Radio Evangelism on WLAR, while in Athens, Tennessee, and later on WCRI in Scottsboro, Alabama. He also taught school at Chattanooga Bible School form 1956 to 1957.

He continued preaching the gospel in several locations for over the next thirty plus years. He preached in meetings, conducted television programs and participated in lectureship series. He wrote articles for various brotherhood papers, and served for a time as a staff writer for the Firm Foundation.

Brother Kidwell we a greatly respected minister of the gospel. All who knew him appreciated his balance, candor, and soundness in the faith. Sadly, a bad heart condition led to a sad loss of life in early December, 1996. Funeral services were conducted at the East Ridge church of Christ in Chattanooga. Internment followed in the Hamilton Memoral Gardens.

Webeditor's Note: In my younger years, the Kidwell name was well known throughout the brotherhood. However, I never had the privilege of meeting Paul. It has been my privilege to have known and worked with one of sons of Paul and Joyce Kidwell. Mark & Francis, and their children were members for a time at the Buford congregation where I preached from 2006-2016. Mark is a very capable teacher and song leader. On one occasion, we were talking about his dad, and he told me a funny story that has time and again caused me get tickled. It showed the sense of humor you have to maintain if you are going to be in ministry. Once, Paul was involved in a gospel meeting somewhere. Joyce attended the meeting with him, but sat further back in the auditorium by herself while her husband sat down front ready to preach. After the close of the morning worship, she very quickly was engaged in conversation with one of the members who was sitting in the pew in front of her. The lady, quite unaware of Joyce's relationship to the visiting preacher, told her, "We are so glad you could come visit with us today. Please come back next week when our regular preacher is preaching. He is a much better preacher than the one that you had hear this morning!" —For certain, you never know what will come out of the mouths of church folks.

The Departure of Paul Kidwell Sr.

The departure of Paul Kidwell Sr. Paul Kidwell died in a Birmingham, Alabama, hospital on Dec. 12, 1996. He was only 63, but his heart failed and his immortal spirit returned to the God who gave it. Paul was well known as a television preacher. The program he founded Seed Sowing, was heard nationwide and in some foreign cities. Of Paul Kidwell it can be said, "Behold, a sower went forth to sow" ... and in the evening, he went home.

His faithful wife, Joyce, buried him with lamentation but "not as those who have no hope." The godly influence of Paul and Joyce is displayed in their children. Two of the four sons, Tim and Nathan, are gospel preachers. One son, Mark is a deacon, and Paul Jr., is a disciple. The two Kidwell daughters, Laura Boyd and Linda Bell, are married to preachers. What a legacy for the church and the grandchildren.

Paul preached in local work in Tennessee, Alabama, Georgia, North Carolina, and Arkansas. Sixteen years ago he set his heart on preaching the Word on a wider scale by the use of television. His ambitious goal of covering the nation with the truth of the gospel was realized when the program grew to include every major market in America. He joined forces with Truth for the World, a program designed to teach the gospel by radio, television, printed page, and preaching campaigns. The work goes on. "One generation goeth, and another generation cometh; but the earth abideth for ever."

Brother Kidwell was under treatment for a heart condition for many years; because of it was unable to carry sufficient health insurance. A fund has been established to help defray the expenses of his last illness. Contributions in his memory and honor can be made to North Jackson Church of Christ, Paul Kidwell Fund, 2780 Hwy 45 By-Pass, Jackson, TN 38305.

Paul, a good soldier in the army of the Lord, has laid his armor down. He exchanged his cross for a crown. Farewell, happy warrior, we will see you in the morning when the sun of righteousness "shall appear a second time, apart from sin, to them that wait for him, unto salvation."

Tears Of Sadness And Joy

The last several weeks have been the saddest of my adult life. I know the comfort of our Lord. I have shared it with so many at times like this, and yet I can't stop the tears of sadness when  I think of our loss.

My father-in-law, Paul Thomas Kidwell, Sr. died Thursday, December 12, 1996 in a Birmingham, Alabama hospital. He was 63.

He was an evangelist with the Church of Christ for 45 years and the speaker on the "Seed Sowing" television program for 15 years. He also had been a speaker on the "Truth for the World program since December. 1995.

The funeral was conducted at the East Ridge church of Christ in Chattanooga with ministers Bob Duncan, Barry Gilbrath, and Brooks Boyd officiating.

I remember dad telling the joke about the preacher who woke up one morning and read his obituary in the paper. He said the preacher called one of his elders and asked him if he had read the obituaries and the elder said that he had. After a minute or so of talking the elder asked the preacher, "By the way, where are you calling from anyway?" There is no doubt where my father-in-law is right now.

There is no preacher that I have ever known who loved God, His word and His work more than did dad. He literally wore himself out in service to God, even as his father, C.T. Kidwell, did before him. He was a scholar and an orator, which rarely are found in combination. Our loss will be felt throughout our brotherhood. His conviction, character and dignity were not only evident in his sermons, but in his life and in his home. He truly practiced what he preached.

I know that he loved his children. For over 16 years he treated me as one of his own, and I consider myself blessed to have been called one of his. He loved his wife as few husbands love their wives. Together they brought their children up in the nurture and admonition of the Lord. They instilled in them the desire "to know and do right." (Timothy is a gospel preacher, Mark is a deacon, Nathan is a youth minister, and both Laura and Linda married gospel preachers.) He loved and delighted in each grandchild.

I also have tears of joy, because dad is in Abraham's bosom. He is resting from his labors, and they were many. His works do follow him. I only pray that we who remain will carry on in the same manner. We will all miss him. However, I know, that our loss - - is his gain!

(Editor's comment: Mickey Bell is married to Linda who is one of the daughters of Paul and Joyce Kidwell. Paul was born in Daisy, TN, October 16, 1933. He attended Freed-Hardeman College (now University). He began preaching at Liggins Springs, AL in 1951. Many mourn his passing. I loved and appreciated him and his great work of evangelism. He was indeed a faithful, able, and effective preacher of the gospel. By faith we can be assured the Lord is taking good care of him. Let us rejoice in the hope of the gospel.)

Directions To The Grave of Paul Kidwell

The Kidwell burial plot is located at the beautiful Hamilton Memorial Gardens Cemetery in north Chattanooga, Tennessee. From I-75 take Exit 4 Hwy. 153 - Chickamauga Dam/Airport Exit and go north 8.6 miles. (Note: You will cross the Chickamauga Dam) In April, 2014 when I visited the grave there was a Big K-mart and Ford Dealership across the four-lane highway from the cemetery. Turn left at the the second entrance, closest to accessing the funeral home, and continue bearing to the right past the enterance to the funeral home parking lot. Make your way to the the three mausoleums behind the funeral home. Pull in to the first corner of the first mausoleum you come to and stop. Begin looking for a green marker with gold writing, closest to the road, McFARLAND. From this monument head straight up behind it four or five rows to the Kidwell plot. Plot Info: Garden Of Prayer, Lot 26A, Sp.1. 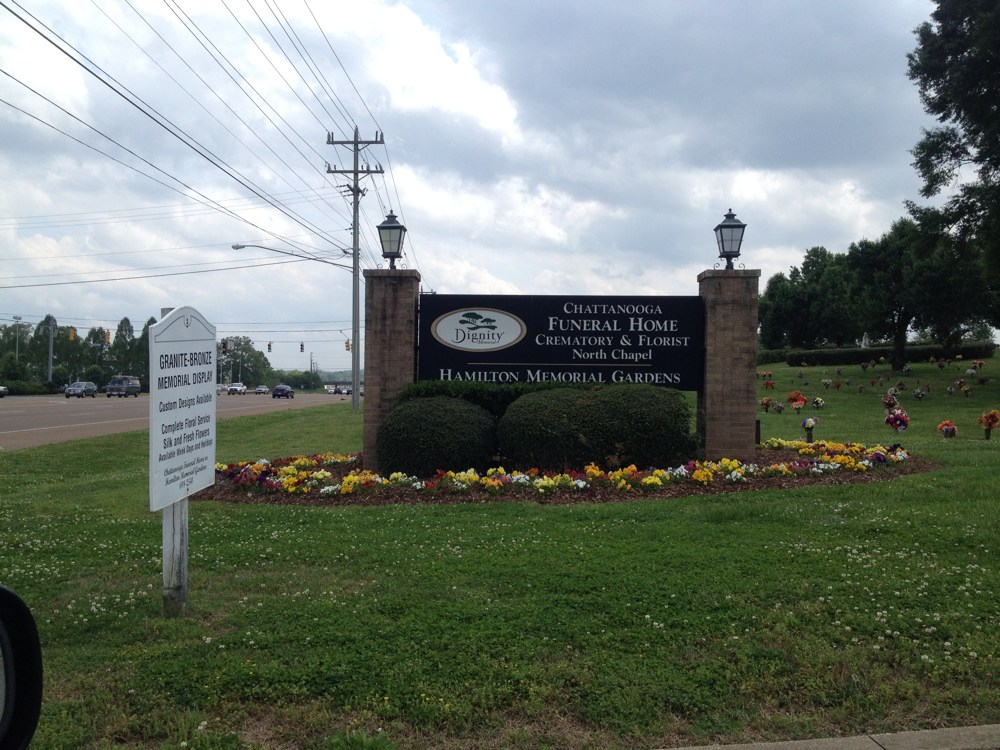 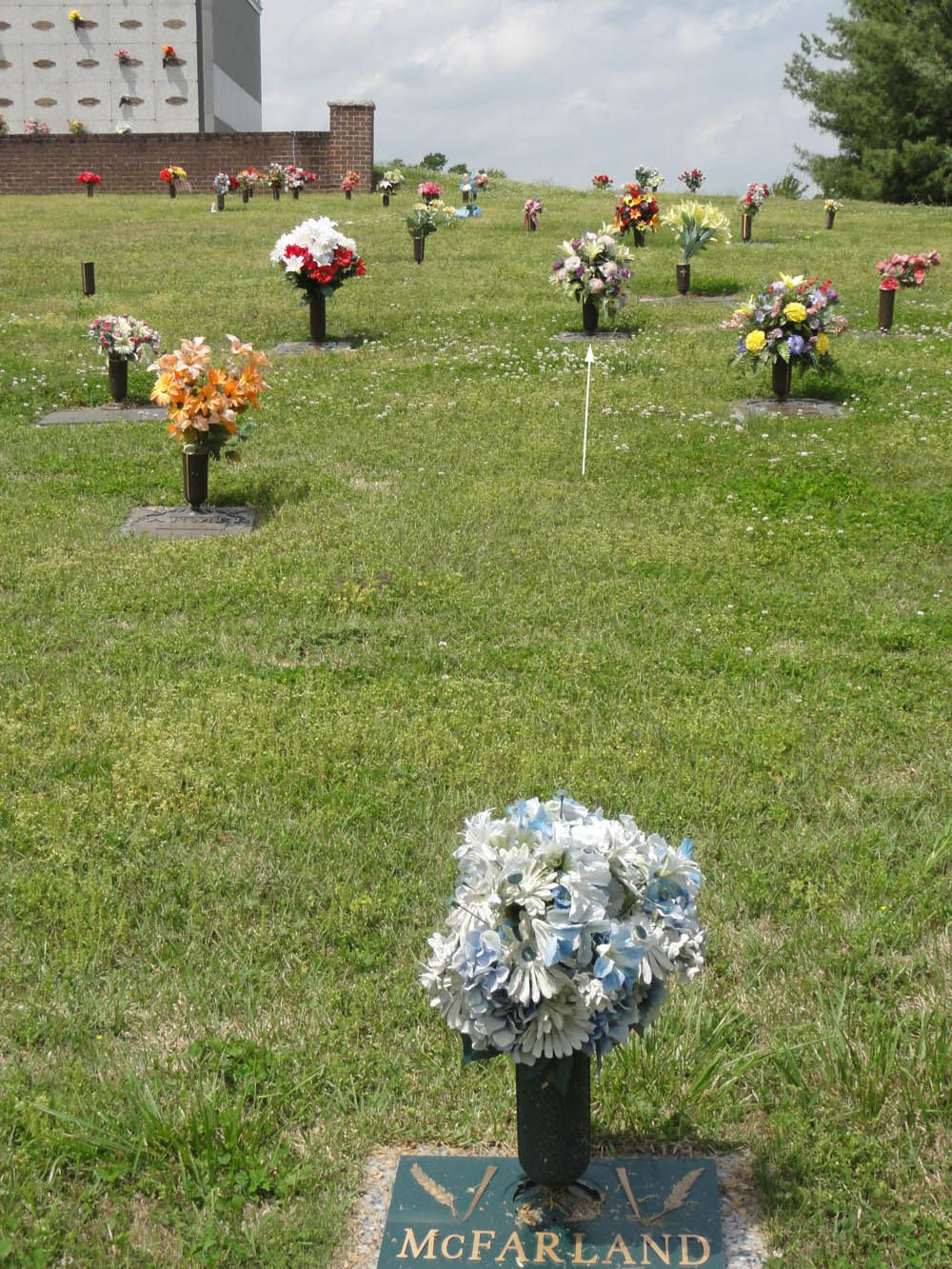 MCFARLAND plot is next to street. Straight behind is the KIDWELL plot. 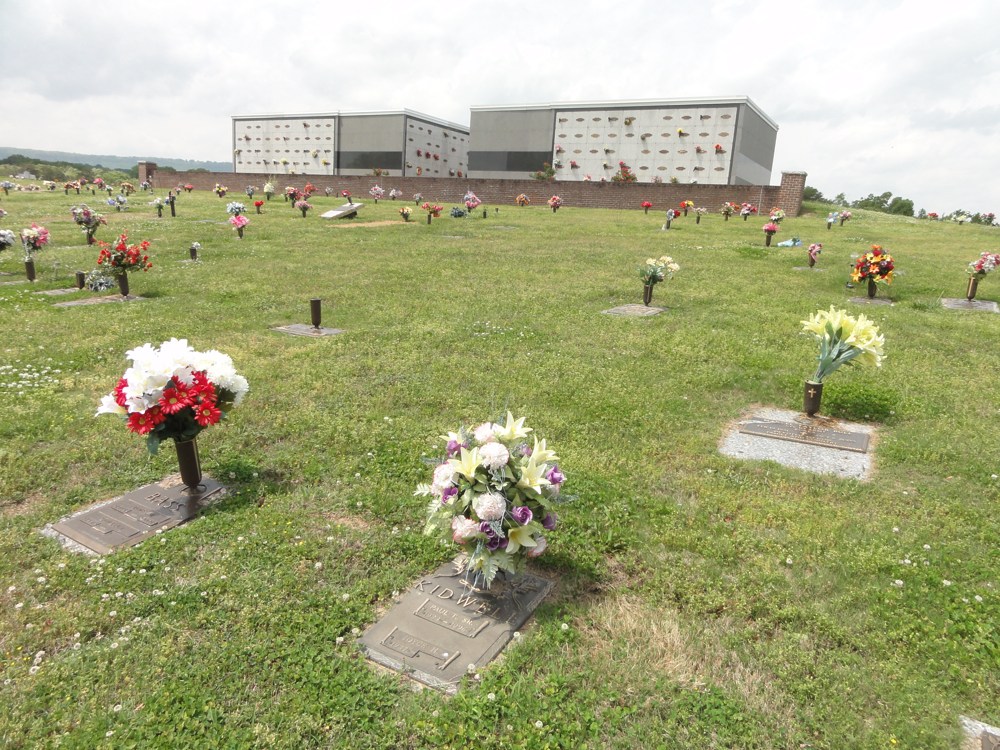 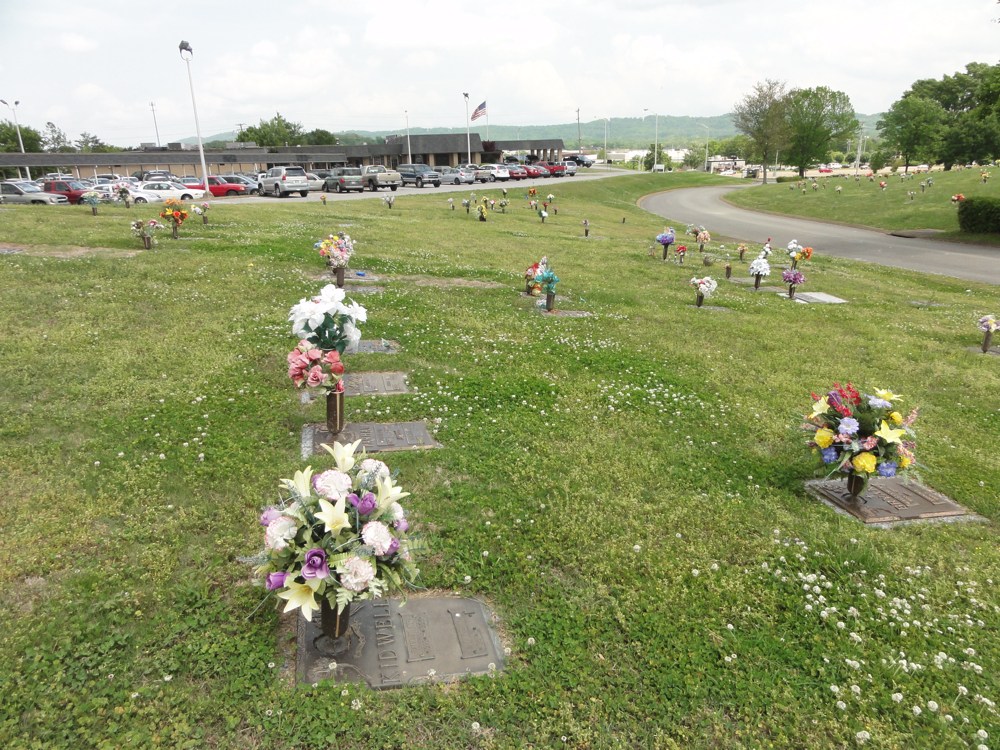 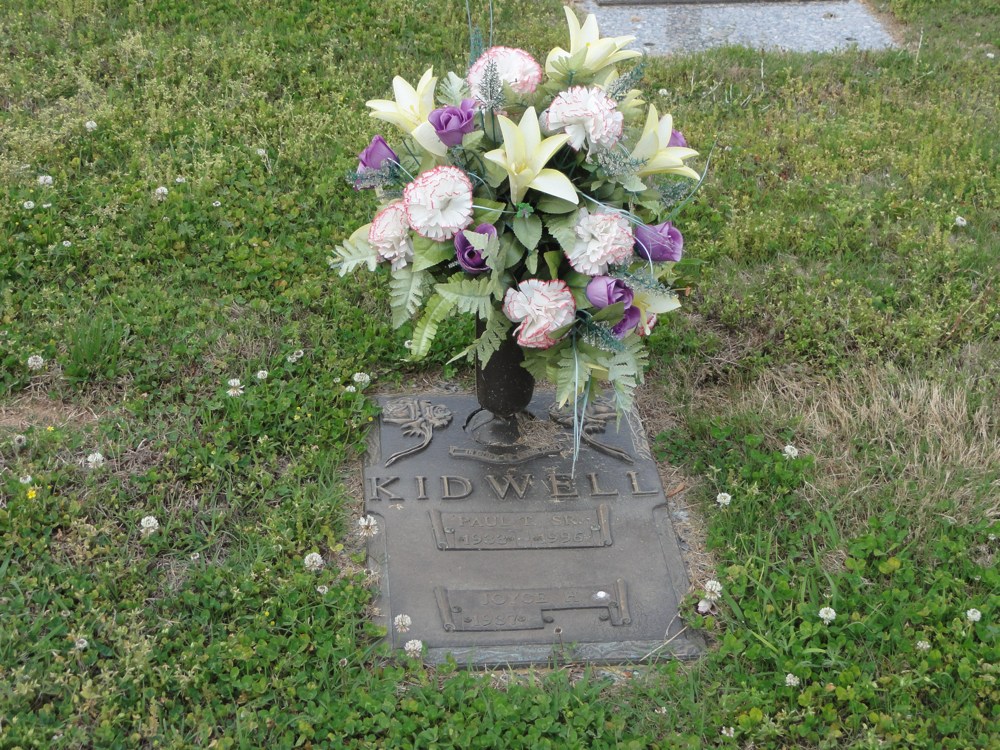 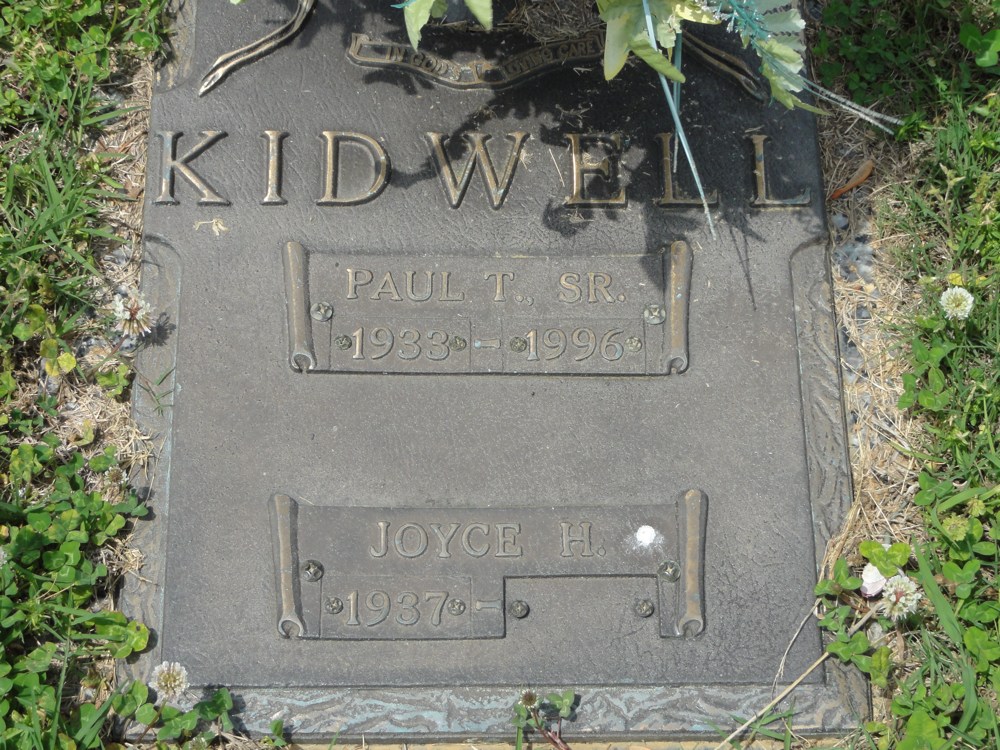 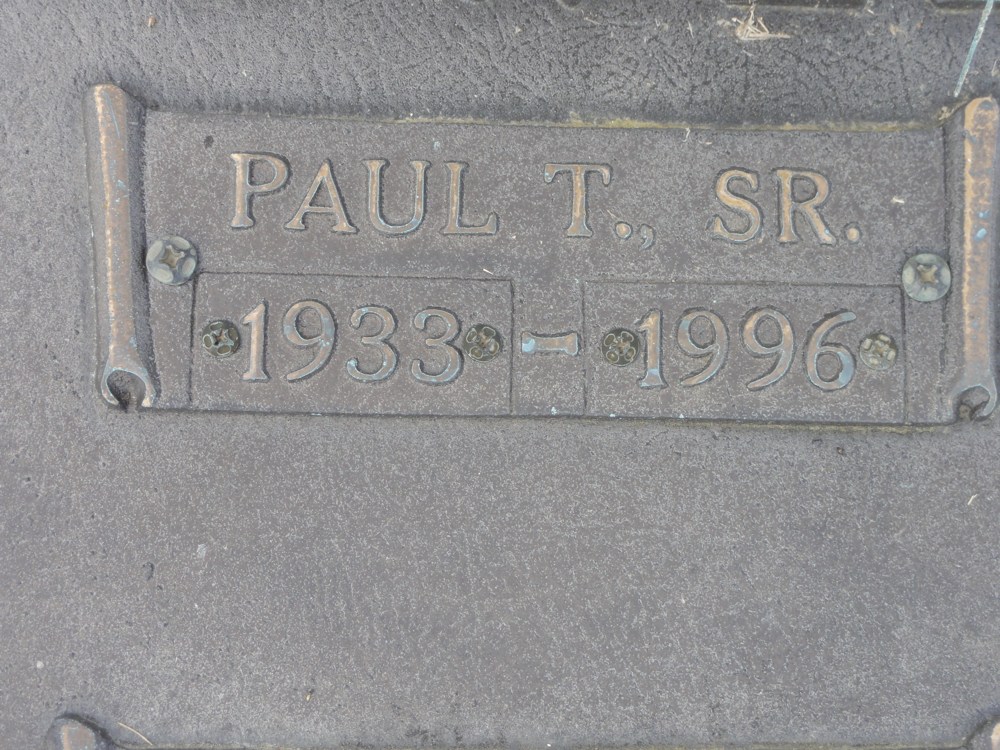