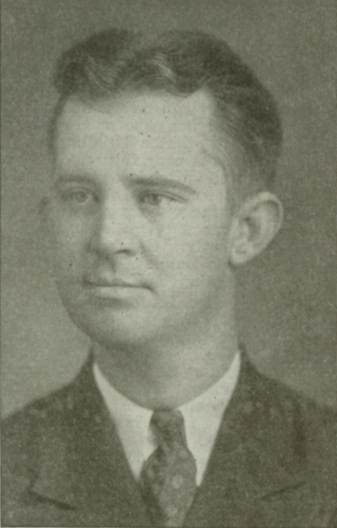 Brother McElroy was born September 19, 1909, at Nashville, Tenn. At the age of two years he enrolled in Sunday School at the old South College Street Church. He obeyed the gospel in November, 1920, at the Russell Street Church, under the preaching of T.Q. Martin, and was baptized by A.B. Lipscomb. Through the encouragement and teaching of S.H. Hall, H. Leo Boles, and A.G. Freed, Brother McElroy began preaching at the age of fifteen years, and has been preaching for fifteen years.

Brother McElroy did two years' local work in Dalton, Georgia, and five years' local work with the Central Church, in Macon, Georgia. Aside from this, he did meeting work exclusively. He has preached from Florida to Canada and from Tennessee to Colorado.

During the last two years, since entering the full-time "evangelistic field," Brother McElroy has had seven hundred additions. Nearly three thousand have been converted during his ministry.

Jack McElroy, full-time evangelist for some twenty-five years, was killed instantly when the 1956 DeSoto automobile which he was driving crashed into an empty auto convoy trailer, which apparently jackknifed across the road in front of him, on U.S. 41, a few miles south of Chattanooga, Tenn., on Tuesday night, December 13. He and Sister McElroy had just left the house of Grady Hendrix in Chattanooga and were on their way to Dalton where Sister McElroy's sisters live. Her father had just passed away there some ten days prior to the accident.

Sister McElroy was, at first, not expected to live, having sustained two broken ribs, a dislocated ankle, a broken leg, face lacerations and several teeth knocked out. As of this writing, the doctors now give her a good chance to recover. She is in Hutcheson Memorial Hospital (formerly known as Tri-County Hospital), Fort Oglethorpe, Ga., and was unable to attend the funeral. She is expected to be there for some weeks.

Funeral services were conducted by the writer at the National Funeral Home in Chattanooga on Friday morning, December 26. Other services in Nashville were conducted the same afternoon by Edward J. Craddock at the Lindsley Avenue church of Christ, with interment being made at Mount Olivet Cemetery.

Brother McElroy is survived by an aged mother in Nashville, Tenn., in addition to his wife. They had no children.

On December 23 an auto accident claimed the life of a faithful and fearless preacher of the gospel, Jack McElroy. Sister McElroy was in critical condition for several days. She must yet remain in the hospital six more weeks and then it will be three more months approximately before she will be able to stand. This will then be a total of more than six months' confinement and care of the doctor. She has a tremendous physical struggle as well as an overwhelming emotional battle ahead of her. She has come a long way. Her outlook is wonderful.

My wife and I visited Itol McElroy about two weeks ago. Her only request was, "Please don't let my friends forget to pray for me. I need the prayers of everyone." This she does need, so don't forget her. But Sister McElroy, who has sacrificed much as a preacher's wife, needs financial assistance also. A few weeks ago George Ryan and Claude Shepperson of Nashville sent out a few letters on her behalf. Here are the last four paragraphs of that letter:

"There have been many congregations and individuals who have asked if there was anything they could do to assist Sister McElroy. Some of us who have been very close friends of Jack's and Itol feel that Itol could use, and would appreciate some financial assistance, due to all the expenses brought about by the accident.

"Since we do not know the names of the congregations who knew Brother Jack we are asking you to please take this matter up with your congregation.

"We would suggest that your check or money order be mailed to Mrs. Jack McElroy, c/o Mr. Grady Hendrix, 806 South Moore Road, Chattanooga, Tenn. Sister Hendrix has been with Sister McElroy every day since here accident.

"This letter should not be construed as a solicitation from Sister McElroy as she does not know about it being written.
Sincerely yours in Christ,
(Signed) George C. Ryan
C.H. Shepperson"

As was stated in the letter the appeal for Sister McElroy went out without her knowledge at the time. This article is being written after conferring with Brother Shepperson. Some help has been received, but not nearly enough. We feel that brethren who love the truth and love those that preach it (and many of these will be among those taught by Brother McElroy) will want to have a part in seeing Itol through. She may eventually get an accident settlement, but she needs help now. Brethren, lets respond now. If you care to write to her directly, she is in room 121, Tri-Counties Hospital, Ft. Oglethorpe, Ga.
-Paul Brock, GA Vol. CI, No 15, April 9, 1959, p.238, 239

Why I Am Not A Campbellite
Acts 8:12
A Sermon by Jack McElroy

The name "Campbellite" has been derisively tagged upon us by an intensely jealous sectarian world. Only those harboring in ignorance and reared in prejudice can make this charge.

I. To Believe The Doctrine A Man Teaches Does Not Necessarily Make One A Disciple Of The Man.

1. If that man preaches the gospel, he is merely an instrument of heaven. (Rom. 10:14)
2. The Samaritans did not become Philipites "when they believed Philip preaching the things concerning the kingdom of God, and the name of Jesus Christ."
3. If Campbell's converts became Campbellites, then Philip's converts became Philipites, because both preached the same plan of pardon. (Acts 8:12; Mark 16:16).

II. To Be A Campbellite Would Be To Encourage Religious Division, Which God Abhors.

III. To Be A Campbellite Would Be To Face Eternal Condemnation.

IV. To Wear The Name Of Campbell Would Destroy The Marriage Bond

As long as we teach the things concerning the kingdom of God and the name of Jesus Christ and baptize men and women, they will become Christians and not Campbellites.

The Jack McElroy family plot is located in one of Nashville, Tennessee's oldest and most famous cemeteries, Mount Olivet. Many famous and wealthy Tennesseans such as, Thomas G. Ryman and others are buried there. To those in Churches of Christ, what makes this cemetery so famous are the numerous men and women of the Restoration Movement who are interred there. The McElroy family is buried in Section 11 Lot # N1/2 of 60.

See a map of Mount Olivet and directions on how to get there. Click Here!

Looking Across To Section 11 From David Lipscomb Monument. McElroys Are
In Front Of The Tree In The Squared In Area Above