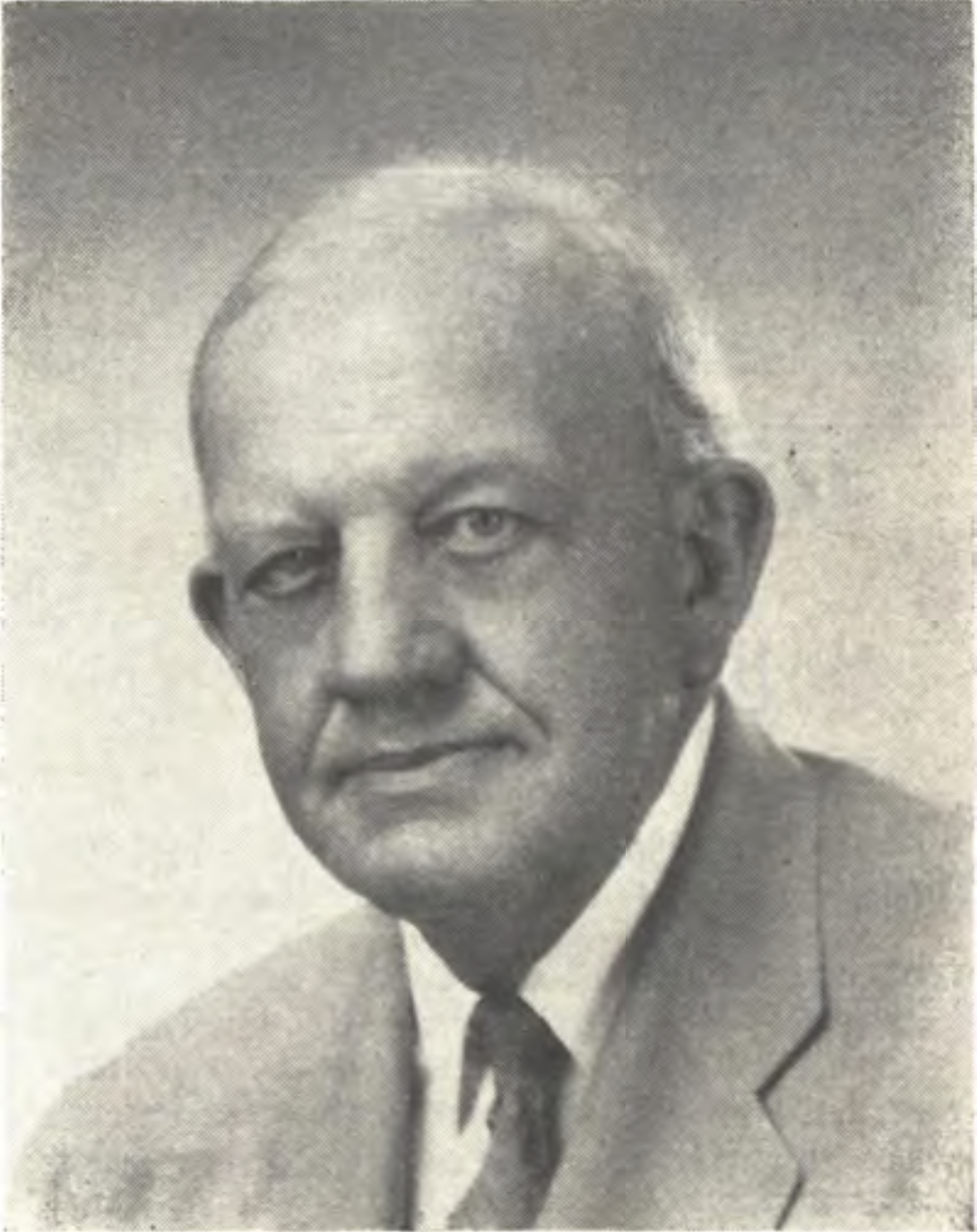 The second of God’s five star, battle scarred generals has now been retired from the field of action by our Great Commander-in- Chief. Reference is made to “Crossing the Bar’’ by both R. H. Boll and H. L. Olmstead, and that almost to the day of being within a two year period of each other. Our loss is grievous and irretrievable, but their gain is very far greater than the great loss which we have sustained.

These saints of God believed in immortality not because of logical arguments in its favor, but because of an inward conviction of its reality. They were so sure of the future life that, like Paul, they were willing to stake everything upon it. They counted all things to be loss in order that they might gain Christ, which is life eternal. This was to them the supreme treasure, and they were quite sure that they would receive the crown of righteousness (crown of life, James 1:12; Rev. 2:10), which the Lord, the righteous judge, promised to all those at that day that love Him. This inward conviction on the part of each was born of a life that was hid with Christ, and it is the certainty of union with the divine life which is primarily back of this assurance, fn this was the greatness of these men made manifest. For they being imitators of their Lord regarded the present life as a mere interlude in the larger life of the Spirit. They insisted on seeing everything under the form of eternity, and urged their hearers to accept the eternal viewpoints as a guide to their daily actions instead of looking at things from the ordinary temporal point, of view. In their teaching and preaching they implored that men strive to lay up treasures in heaven rather than upon the earth in that the heavenly life is of more significance than the earthly. They viewed religion as eternal file in the midst of time. They were in' the world, and yet not of the world because like Christ they knew that their life was not to be cut short by death. In short, these men possessed such a complete consciousness of their own immortality that a realization of this fact is essential to any proper understanding of their teaching and work.

The great value of the Christian faith consists in the fact that it enables each of us to appropriate realities which science cannot reach. These realities are of supreme importance for the daily ordering of our lives. These realities, the conviction of life beyond the grave being only one, were well exemplified in the life and work of both R. H. Boll and H. L. Olmstead. As someone has well said: “Great men hallow a whole people, and lilt up all who live in their time.” Who among 11s can even begin to evaluate the blessings wrought by the grace of God in our lives through these tried and true servants of His? What a privilege! What an honor! What a responsibility! What an uplifting, refreshing experience it was to have heard and known personally these great men of God whose lives were completely dedicated to Him and who knew, understood, and proclaimed that spiritual is stronger than any material force. Furthermore, “that it is not the beginning but the continuing of the same until it is thoroughly finished which yieldeth The True Glory.” Herein lies the tragedy of our time: not that men are poor—all men know something of poverty; not that men are sick—all men know something of physical ailments. Nay, but that those who criticized and maligned these two servants of God most of all knew them least of all.

It was during the second World War that I came to know Brother and Sister Olmstead better than at any time previous to this. What a joy and blessing it was to visit in their home, experience the rich fellowship of the congregation which they loved so much and where they labored so long, and together with Brother Olmstead visit and speak in some of the country churches with which he worked. To know Brother Olmstead was to love him, and to know his work was to appreciate him. There is no psychological road to tranquility of the soul, but only the spiritual. Our only consolation lies in God whose love will some day justify its ways. “So when a great man dies, for years beyond our ken, the light he leaves behind him lies upon the paths of men.” And the light of the sweet Christian life that has departed has illuminated the hearts and lives of many, and will continue to illuminate the hearts and lives of us all through his immortal writings until the coming of our Lord. The
memory of H. L. Olmstead cannot die.

Well might this epitaph be inscribed on his relenting stone:
“I have sinned; I have repented; I have trusted; I have loved; I have served; I rest; I shall rise. And through the grace of Christ, I shall reign.”

Brother H. L. Olmstead has been called home. We recall his consoling words to others, his deep understanding of the eternity he himself would spend with the Lord. In the past three months he fought a losing battle with several afflictions. In one of his earlier cards he said, “Pray that I may be restored to health if it be the will of the Lord.” We believe he was in the will of the Lord both in this illness and in times of robust health.

This noted preacher’s work started at Willisburg, Kentucky, in the early years of our century. Since he has served as general evangelist, minister twice at the Gallatin, Tennessee, church, with the churches at Horse Cave and Franklin, Ken lucky, and in Toronto, Canada. He witnessed half a century of vast upheavals in the political and spiritual world. When the church of Christ brethren faced the decision regarding the preaching of the Whole Counsel of God on prophetic matters, Brother Olmstead selected the less popular position because he believed in the promises of God. He was a profound Bible scholar and preacher, and seemingly never forgot a part of the word, nor an event in his useful life. One time when some church leaders in central Kentucky asked him if he preached any different than he did in earlier days, he replied, “Yes.” “In what way,” they asked. "I am a better preacher.” This was not boasting. He never ceased growing- in an understanding of the will of the Lord.

When plans were drawn to move Kentucky Bible College to Winchester, Kentucky, Brother Olmstead was appointed Chairman of the Board of the Christian Educational Corporation of Kentucky. It is our humble judgment that here, during the past six years, he performed one of the momentous tasks in his long and useful life. He travelled into many States of the South, and into the State of Indiana, urging support for true Christian education. His energies would tire some of us who were young enough to be his sons.

Surviving this man of faith is his dear wife, Mrs. Verna Olmstead; a daughter, Mrs. Florence Collins; a son, Myron Olmstead, and a number of grandchildren, two brothers, and one sister. Our deepest sympathies and love go with this little tribute to one who seemed as dose as a father to so many of us, especially to the one who writes these words. We thank the Lord for the life and influence of H. L. Olmstead. We know he has been called home to be with the Lord he served and loved. Gallatin will miss their distinguished citizen. But with him it is far, far better. We feel his words might now be, “Blessed be the name of the Lord.”

OVER FORTY YEARS OF UNBROKEN FELLOWSHIP

I first met Brother Olmstead in Louisville. That was while I was in my first meeting with Portland Avenue, November, 1915. Previous to that, however, Brother Olmstead had contributed helpful articles to Word and Work, while I was yet publishing it from New Orleans. His writings then became all the more appreciated.

After that we had Brother Olmstead in two series of meetings with the Seventh and Camp Streets congregations in New Orleans, and I discovered unusual depths to his thinking and preaching, and a scriptural balance between l he doctrine of grace and the workings of faith in the appropriation of the freely offered grace unto salvation. His teaching and his labors of love will continue to bear fruit. That is divinely arranged for.

But vacancies keep occurring; who arc the men allowing God to fit them to fill the gaps? men with that measure of humble boldness we observed and appreciated in H. L. Olmstead? Other men have left us, likewise, whose works follow them. Their torches must be borne by others whose faces are facing forward with decision.

On Monday morning, March 31st, our beloved Brother Harold L. Olmstead gave up the fleshly tabernacle that had been his abode for a little more than 75 years, and went home to be with the Lord, thus increasing the ranks of those valiant soldiers of the Cross whom we “have loved long since, and lost a while.” For three months saints of God over a vast area of the country prayed that God might spare him to us a while longer. God listened, lingered, then said in His mercy, “ ’Tis enough; come up higher.” And we submissively say, "Amen, Lord, it is Thy will.” He leaves for his loved ones and friends the heritage of a long and useful life of faithful service to the Lord. May they be comforted in the hope of the resurrection and the assurance of a great reunion in that glad day!

The Olmstead family plot is located south of Portland and just north of Gallatin, Tennessee on Hwy. 109. Buried in the Crestview Cemetery, the grave is one the west side of the cemetery just off Scotty Parker Road. You can access the cemetery from Hwy 109, but the plot location is: Garden Memorial 94 1-SW. 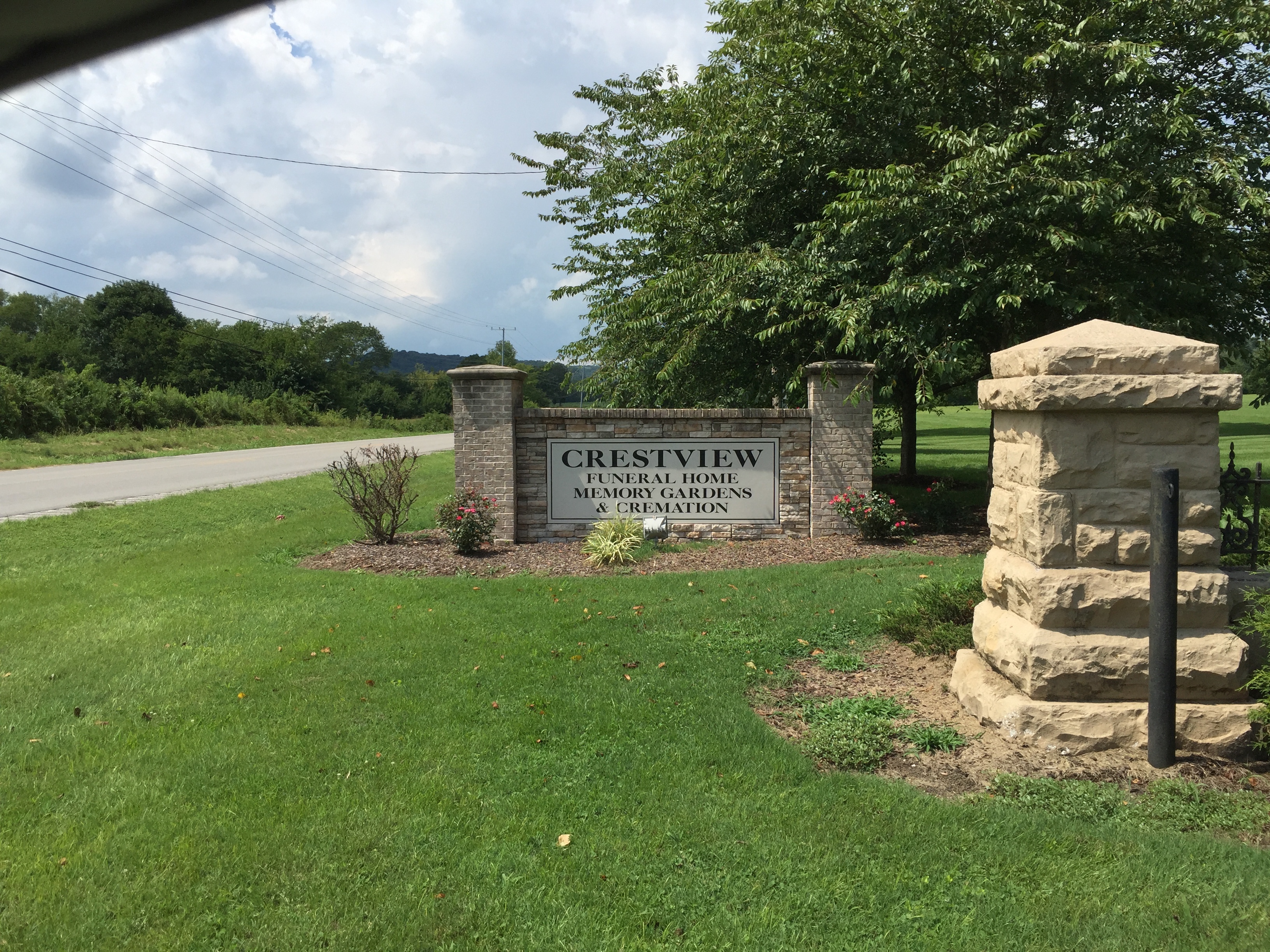 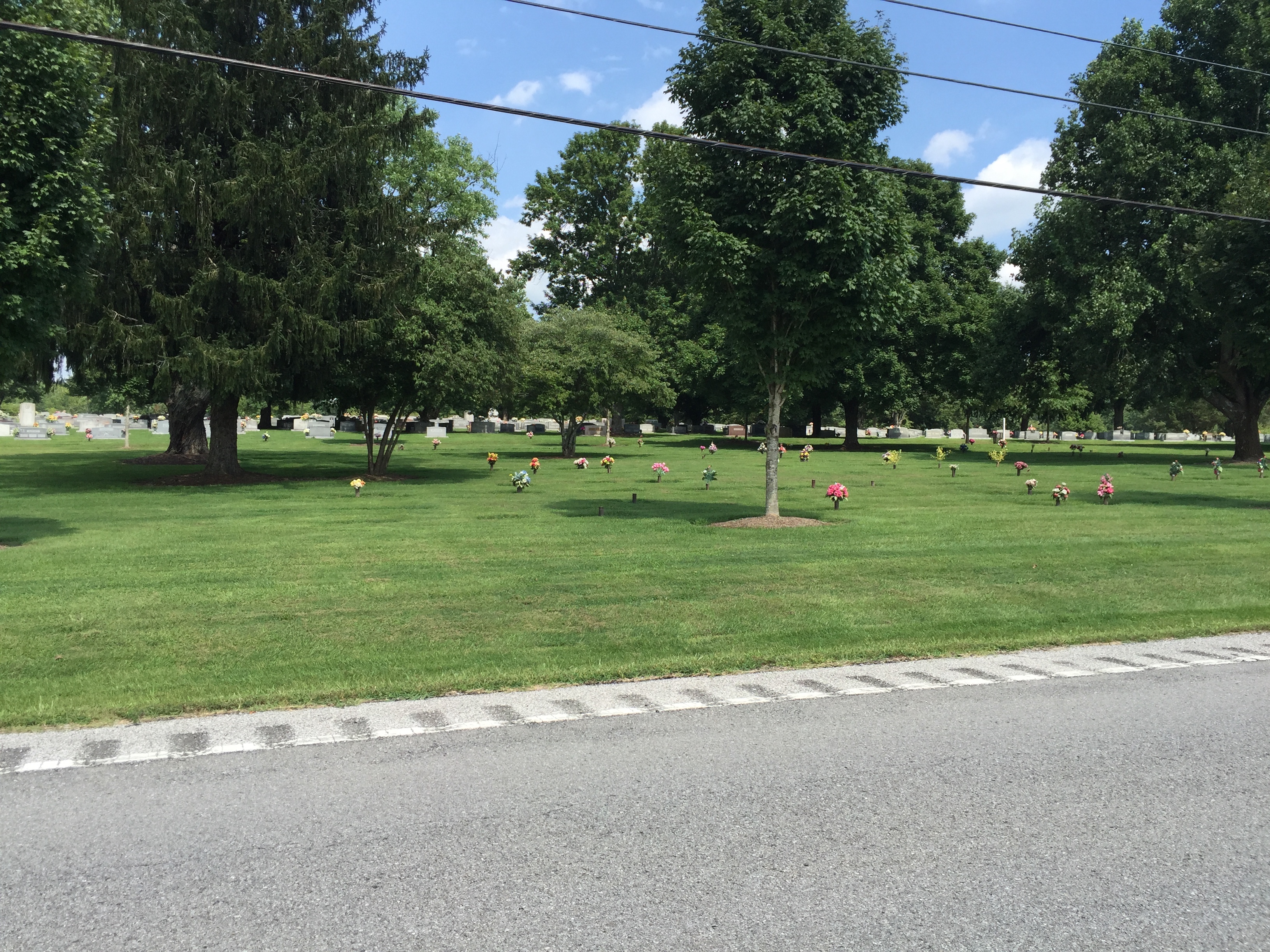 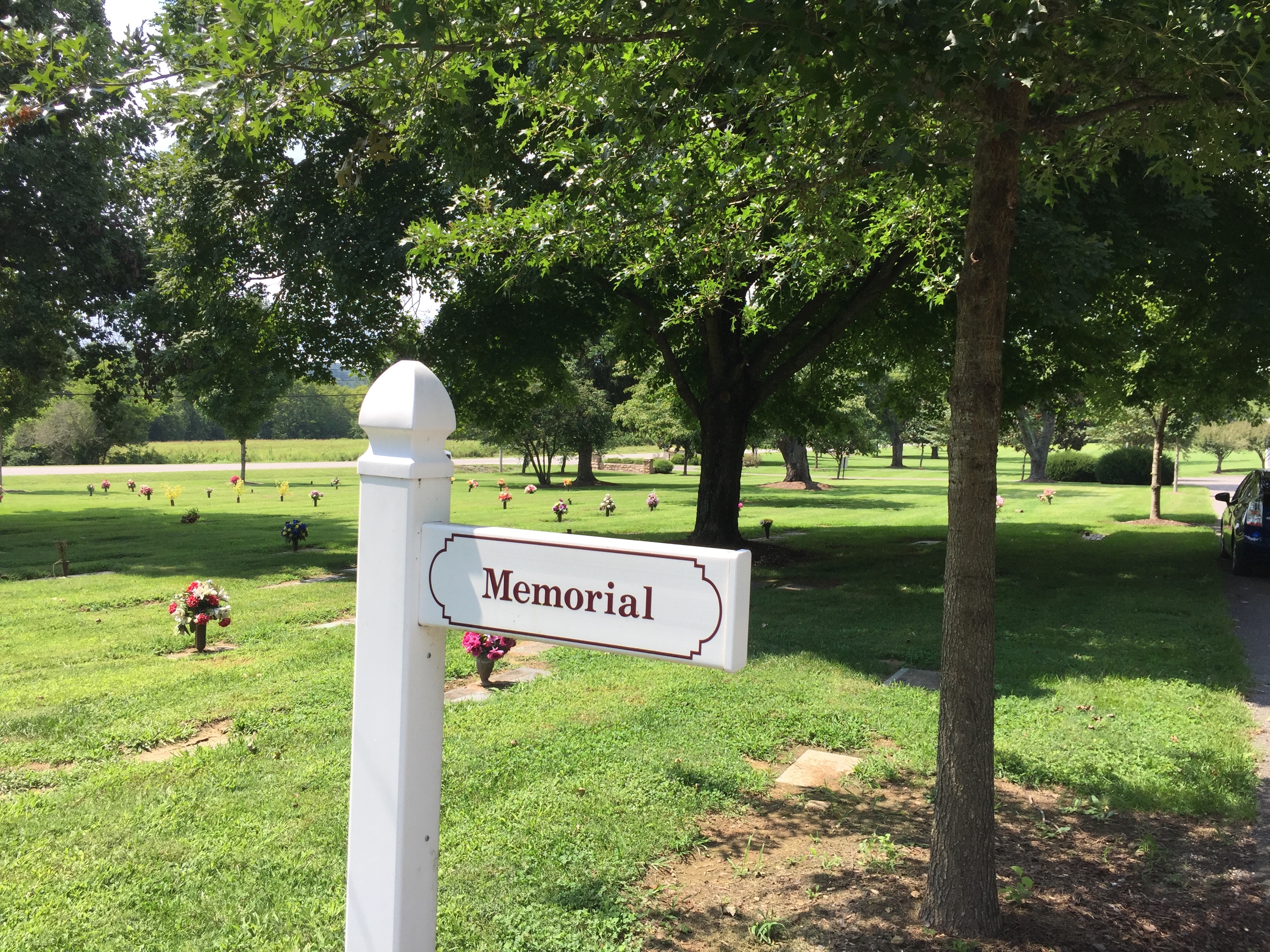 Graves just above "Memorial" in distance 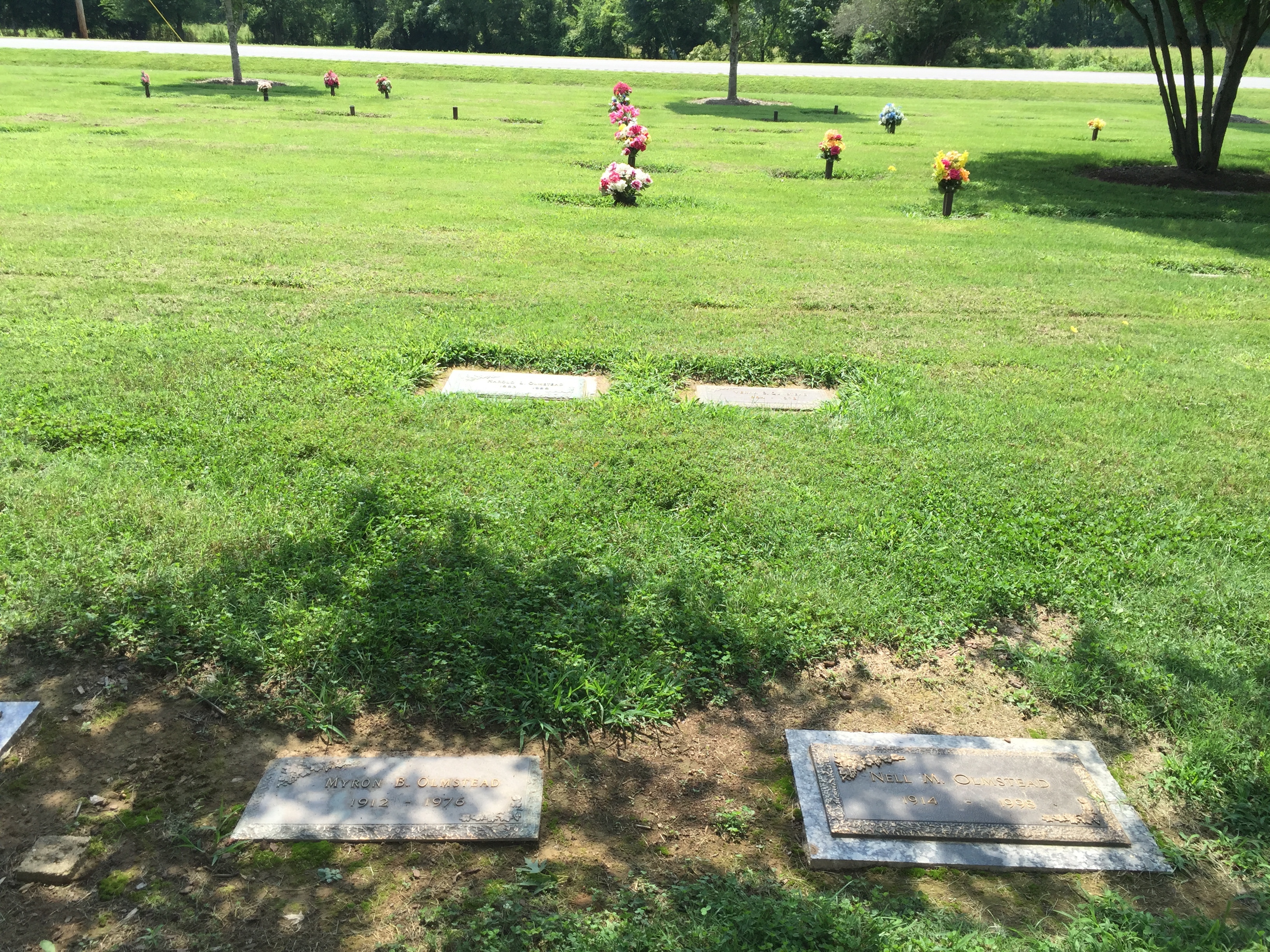 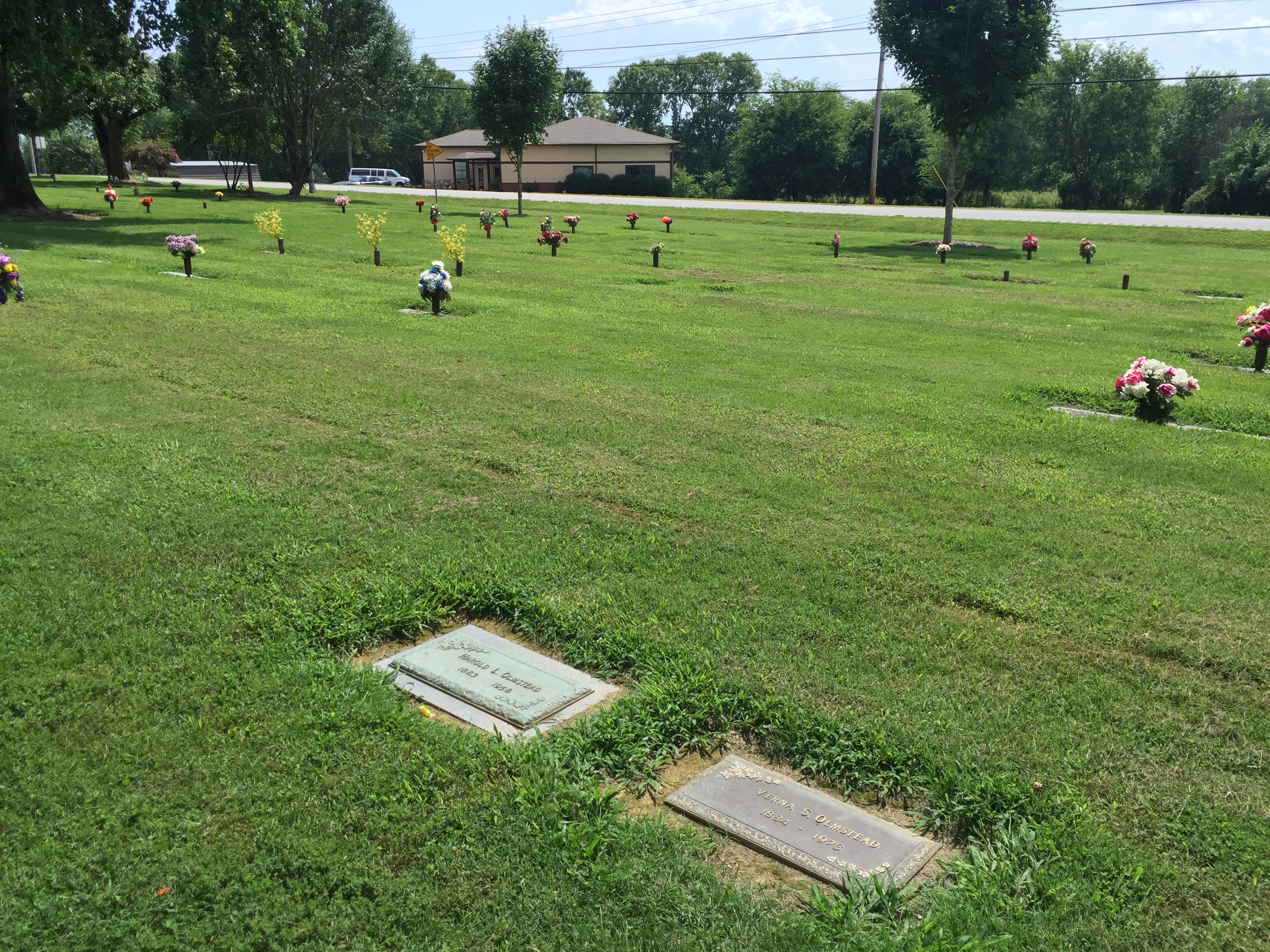 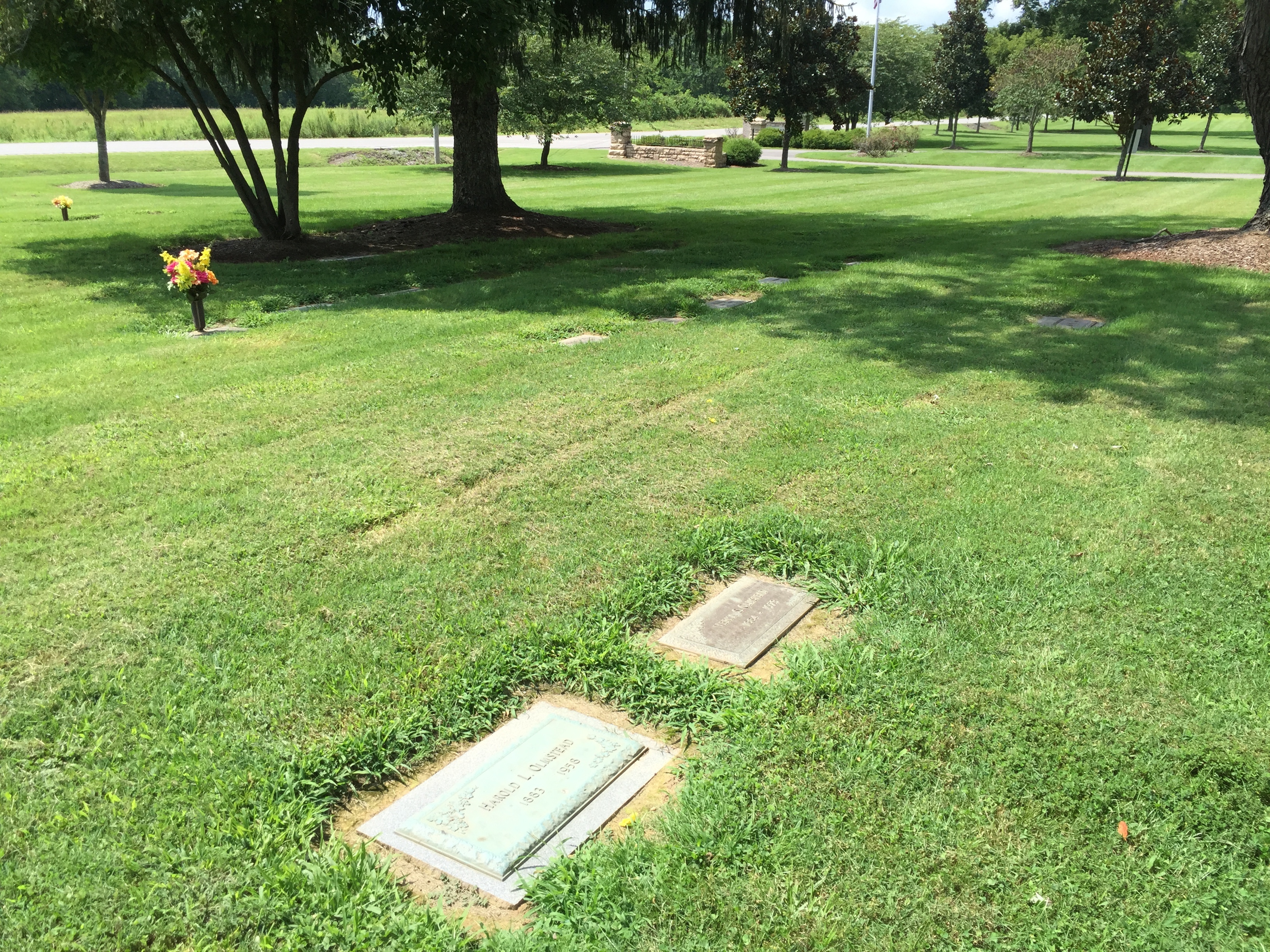 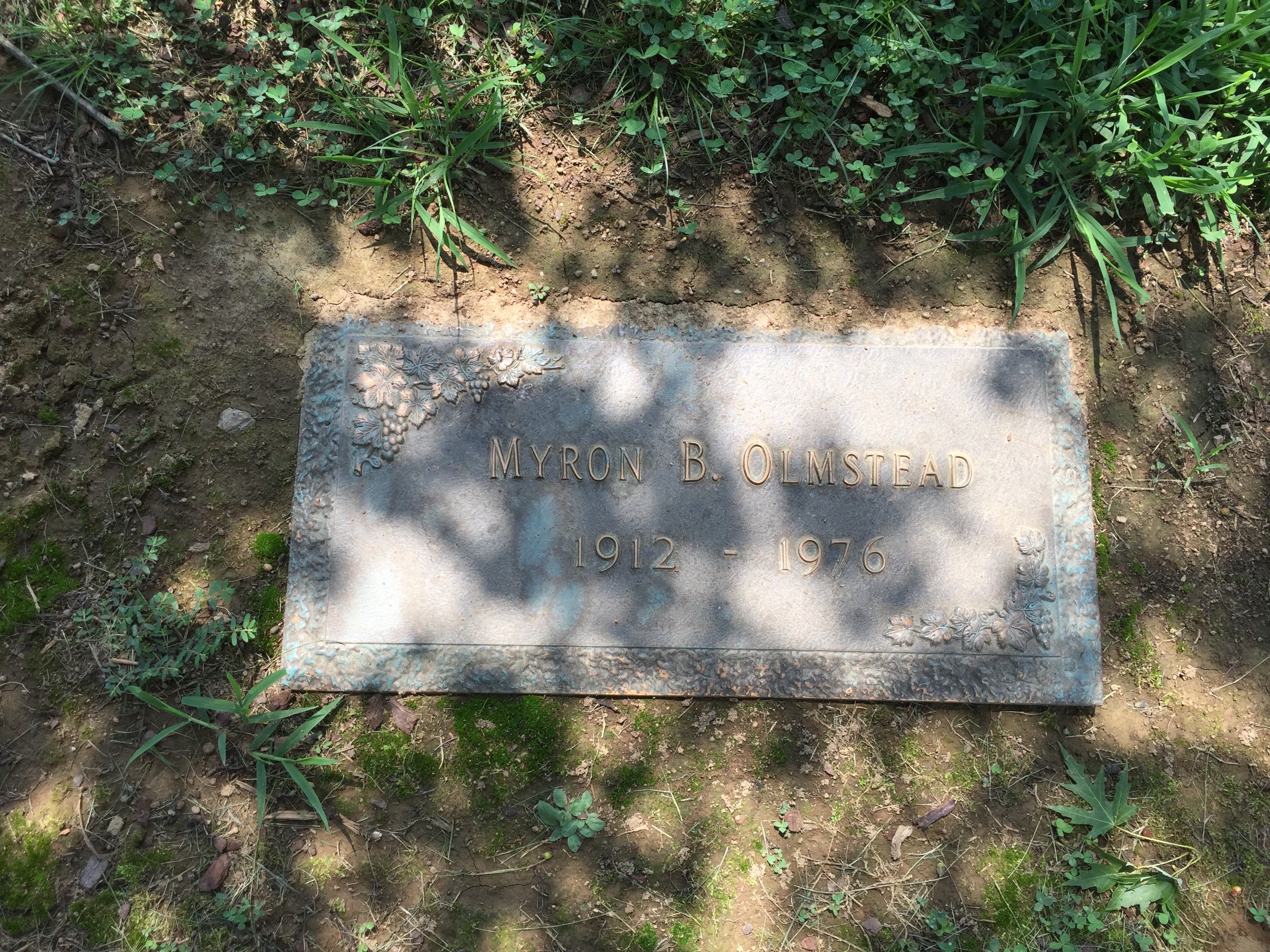 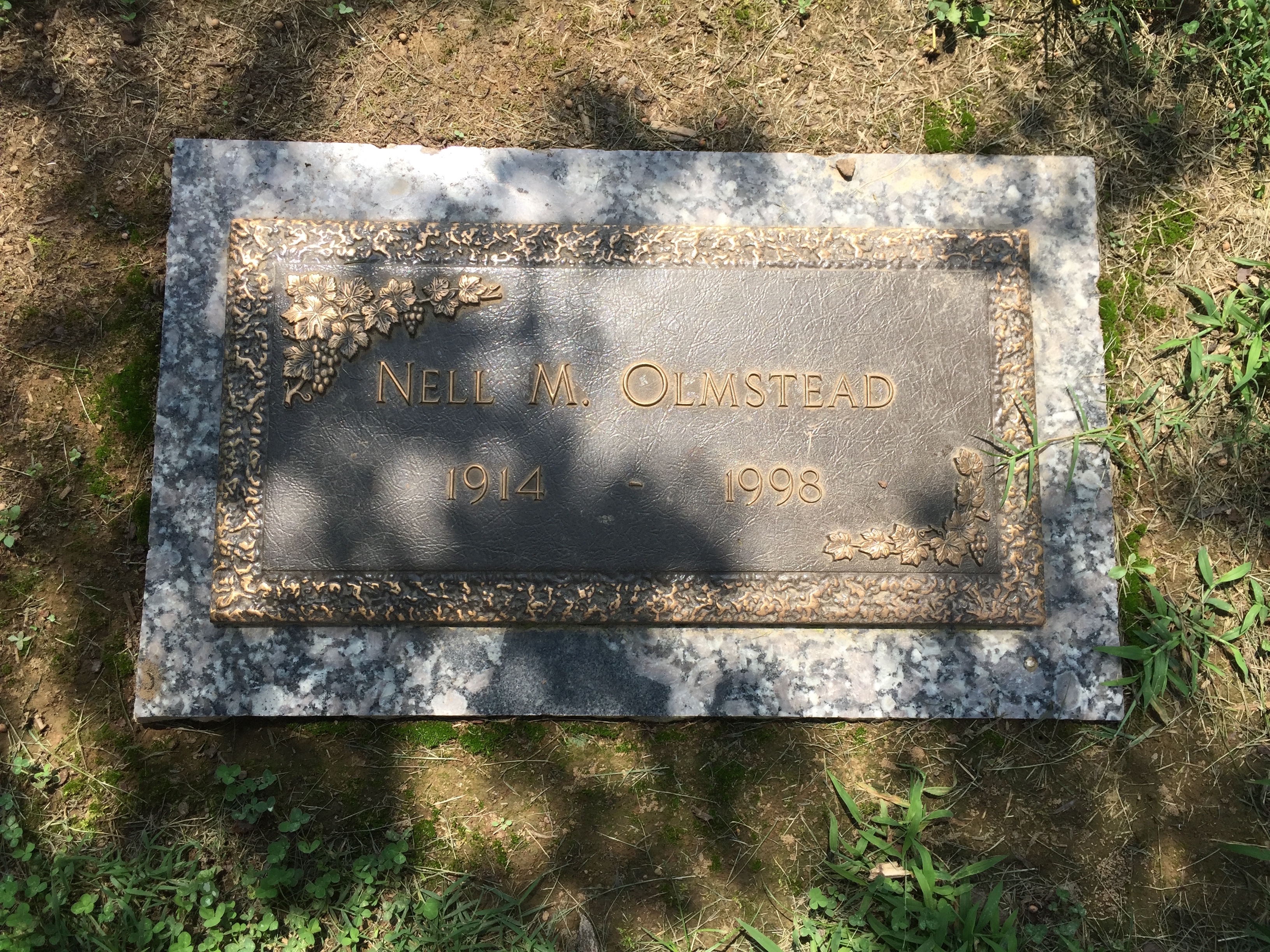 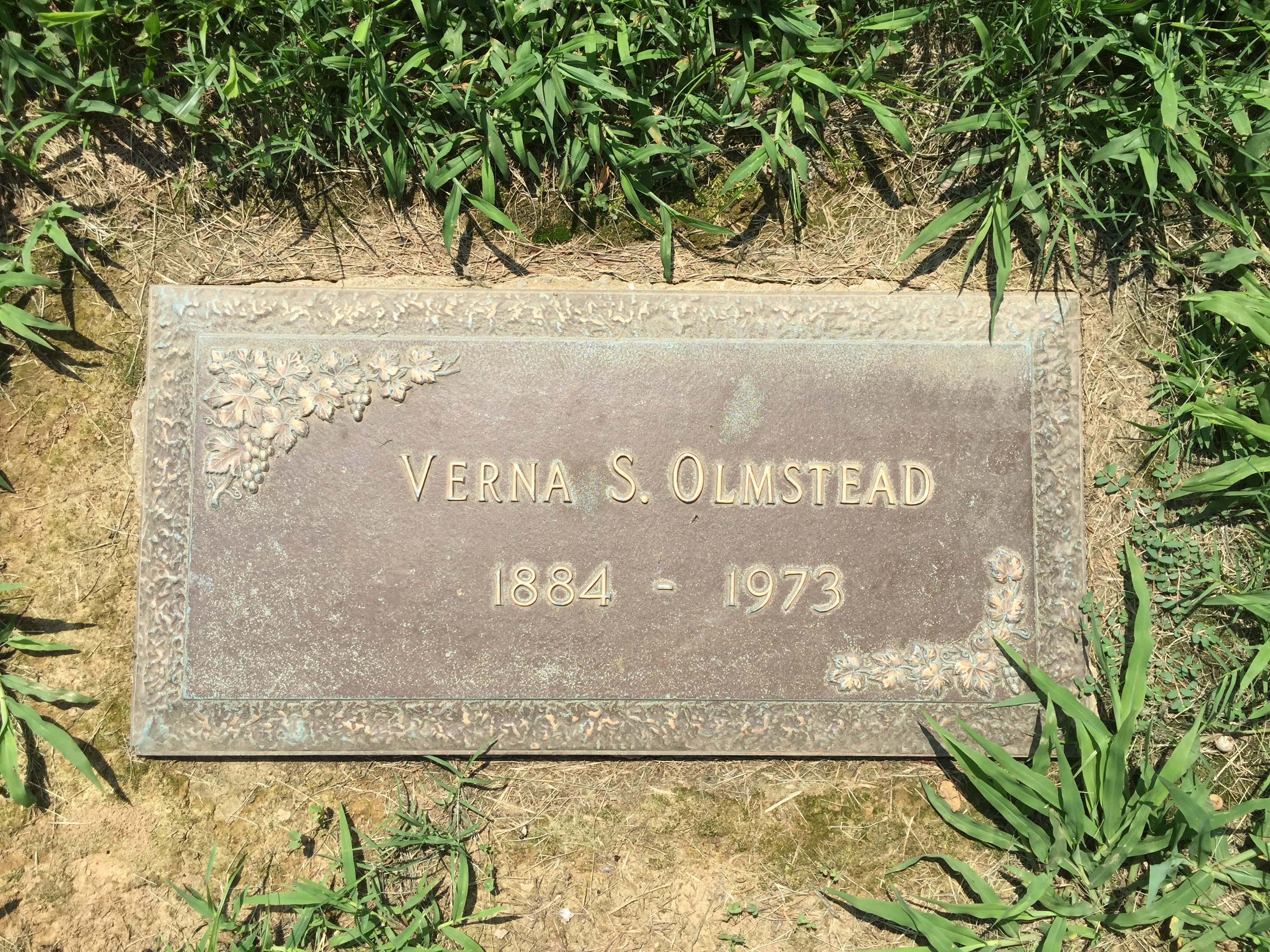 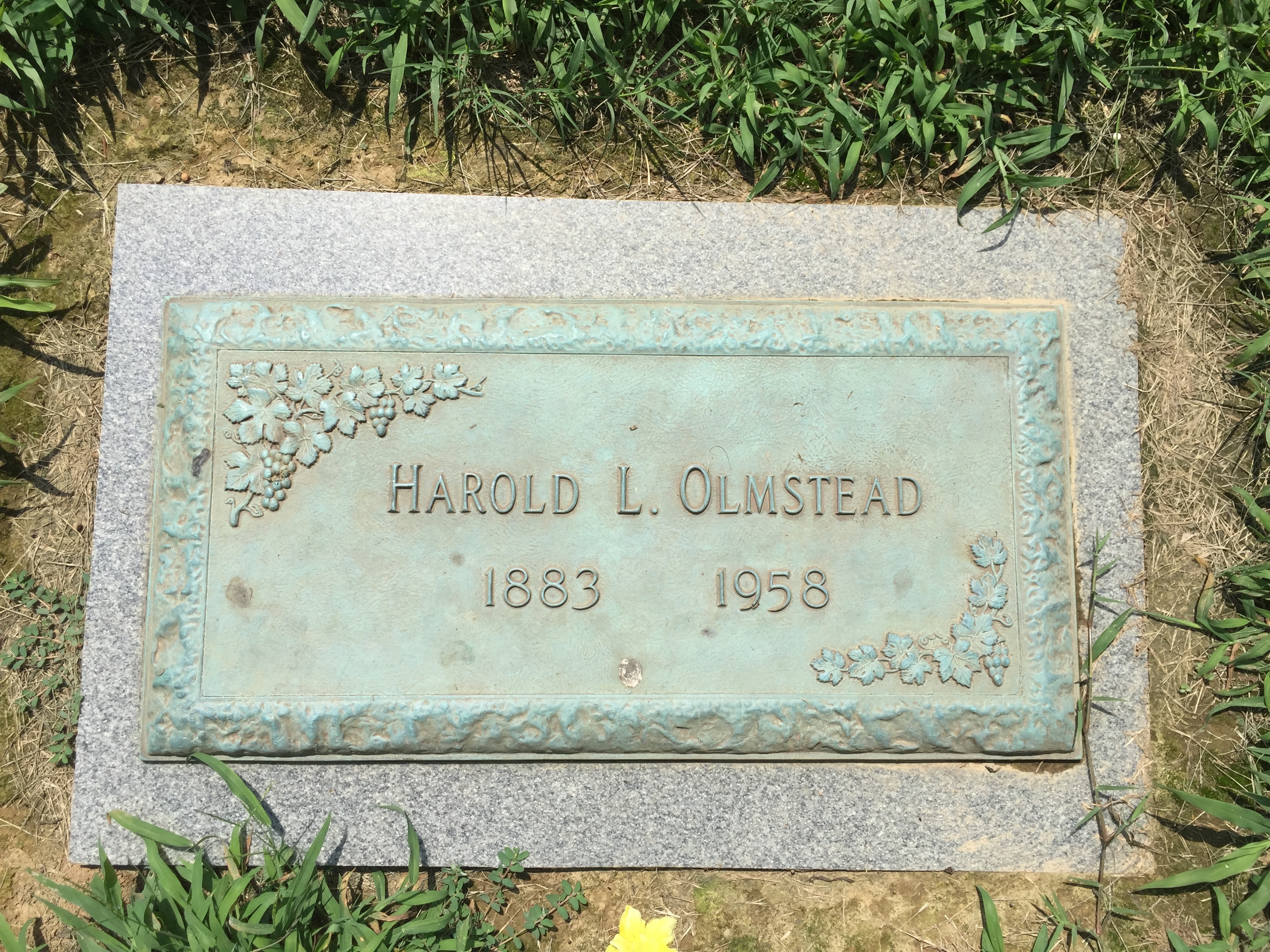 Special Recognition: Special thanks to Larry Miles for providing information on the life of H. L. Olmstead