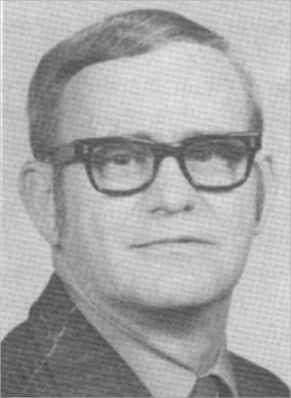 Biographical Sketch of The Life Of Rhoden Presnell

Rhoden Presnell was born August 3, 1925, at Quincy, Florida. He was the son of Walter Lee and Mary Angeline (Bryant) Presnell. His formal education was in the grade schools of Florida and after this he attended Mt. Pleasant High School at Quincy, Florida.

On April 13, 1945, Rhoden Presnell married Miss Margaret Jeanette Miller. To this union two boys and two girls were born. The boys were Carey Allen and Rhoden Hal. The girls were Beverly Gail and Judy Carol.

Rhoden began preaching in July, 1945, at Port St. Joe, Florida. He established the church there in 1946.

Rhoden was a member of the board for Palmetto Bible Camp and for Carolina Bible Camp. He spoke at the lectureship for Freed-Hardeman College, Henderson, Tennessee, and at Harding College, Searcy, Arkansas.

Rhoden's greatest strength was in the area of personal evangelism. In North Charleston, South Carolina, in three years, he and several people in his personal evangelism program baptized 1,000 people. Rhoden conducted personal evangelism workshops in many states. Through his own Bible studies and those he set up according to his program approximately 5,000 people were converted. The wonderful blessing of this was that these people studied a minimum of 15 lessons and after their conversion, the new converts were appropriately nurtured to remain faithful.

Rhoden also diligently worked with the Bible school and the local congregation where he preached. He knew how to organize the Bible school and how to motivate and train the teachers. The Bible school became an active part of the local work and was not only beneficial in inspiring children and parents, but in helping new converts to mature. He also conducted Bible school clinics. Rhoden worked well with the people everywhere he preached, and he was able to help them develop their talents and abilities and increase their commitment to Christ. Everywhere he preached, he helped the elders to raise their sights in spiritual growth. Rhoden was never satisfied with his local work at any stage and through his encouragement and his ability to depend on the Lord, the work would continue to grow.

Rhoden used posters, flannelgraph, filmstrips and other visuals in his sermons. He had over 1,000 posters that he used in preaching. More than that, he had something to say when he preached. There is no way to estimate how many scriptures he had memorized, but he used so many in his sermons that one would wonder if he had memorized the entire New Testament.

Rhoden taught classes at Harding College and Freed-Hardeman College lectureships. He was a promoter and backer of the Carolina Lectures at their inception. He taught at Georgia Christian a year while he preached at Valdosta to help in that work. He was a member of the board at Palmetto Bible Camp and other camps. Rhoden was of great influence throughout the mission fields of the Southeast.

In 1973 Presnell suffered a severe stroke which left him confined to a wheelchair with serious impaired vision, no sense of balance, a weakened voice, and a constant severe pain. This never discouraged him. On occasions when asked, he preached. He conducted two personal evangelism workshops. Upon moving to Henderson, Tennessee, he conducted many devotions at the dormitories and many students from Freed-Hardeman College came to his house regularly to learn the how-to of local work and of conducting home Bible studies.

Funeral service was held at the Casey Funeral Home with Brad Brumley of Henderson, Tennessee, and Walter Edwards of Hopkinsville, Kentucky, officiating. Burial was in Henderson with interment in Estes Cemetery.

Rhoden Presnell was buried in the small graveyard that sits behind the Estes Church of Christ, just south of Henderson, Tennessee. Head south of Henderson on Hwy. 45 about 5 miles and the Estes Church is on the eastern side of the Highway. You can't see the cemetery from the road. The grave is on the last row toward the southern end of the cemetery. 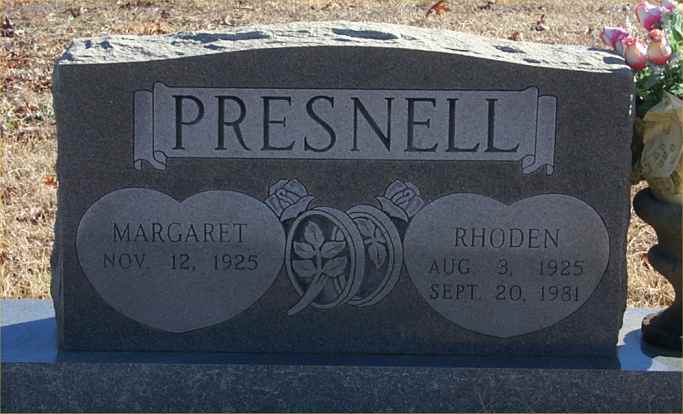 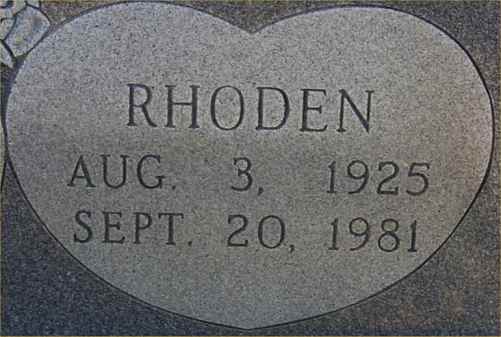