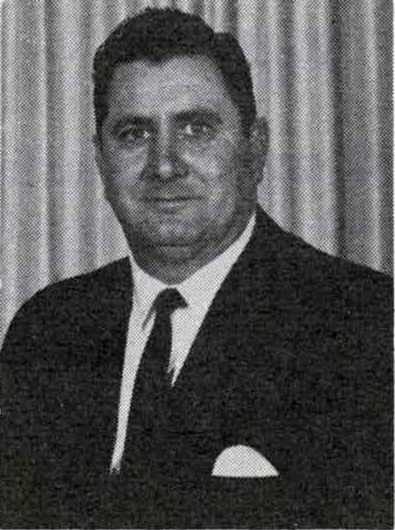 In the latter part of January of this year, headlines in Nashville news told of an auto accident wherein Paul E. Shoulders, minister of the Hendersonville church of Christ was seriously injured and an elder of the same church, Cecil C. McKelvey, was killed. These two servants of the Lord were on their way in personal work of the church when an inebriated driver crossed the four-lane highway causing the head-on collision. On April 13, Brother Shoulders succumbed to his injuries and on April 16 this writer, assisted by Ray Frizzelle of Florence, Ala., Glenn Martin of Chicago, Ill., and Bob Prater of Hendersonville, Tenn., conducted his funeral in the Hendersonville church building and saw his body entombed in the Spring Hill Cemetery. Before moving to Hendersonville, Paul labored seven years with the church in Roanoke, Va., and two years with the church in Blacksburg, Va., at the later place being supported by the Hendersonville church. I was a co-laborer with him the entire nine years and know personally of his good work. In a mission field, one does not work with a congregation, he works for an area, and in this case an area with a radius of more than fifty miles. Because of Paul's dedicated preaching of the truth, his uncompromising stand for righteousness, his continual exhortation that Christians stand up and be counted, because of his genial outlook on life and his tireless activity in the Lord's cause, he made an indelible impression upon all with whom he came in contact. Laborers in a mission field seldom make the headlines except in the divine records. The Southwest Virginia area will not soon forget what Paul Shoulders and his good family did here. His good wife, Rose; daughters Paula and Suzanne and sons Timothy and Jon have accepted this loss in Christian trust, relying upon the support of his everlasting arms and the tender sympathy of hundreds of saints. May the God, whom husband and father served so well, administer the healing balm and supply the strength to them in their sorrow that they may finish the course charted by him who no longer walks with us. (Picture included)

On Tuesday night, January 30, 1968, Paul Shoulders, a preacher of the gospel in the church at Hendersonville, Tennessee (a suburb of Nashville) met with his brethren at the church building for the weekly visitation. A deacon, with whom he was to have gone to set up a cottage meeting, had a change in plans and was unable to accompany him. Thereupon, Cecil C. McKelvey, an elder in the church agreed to go.

Fifteen minutes after leaving the church building, Brother McKelvey was dead and Paul Shoulders was critically injured—victims of a drunken, pill-doped driver who crossed the median of the four-lane highway between Madison and Hendersonville and hit their car head-on.

Realizing the great financial burden, in addition to the tremendous personal loss, which must be borne by this great Christian family, certain members of the congregation decided to create the Paul Shoulders Memorial Fund. The total proceeds of this Fund will be used to pay educational costs for the four Shoulders children.

By the grace of God, as of August 15, the Fund now totals $3,747.25. Churches contributing have been: Central Sparta; Radnor, Hillsboro, Harpeth Hills, Nashville; Central, Birmingham; Mt. Pleasant; Cottontown; Sykes; Eighth and Robertson, Handford, Virginia and Pearisburg, Virginia. Individuals who have responded, beginning with the Hendersonville congregation, are many. For all these manifestations of love and generosity, his family and brethren are grateful.

Directions To The Grave of Paul E. Shoulders

Paul E. Shoulders is buried in the Spring Hill Cemetery in Madison, Nashville, Tennessee. On Briley Parkway (Hwy. 155) go to the northside of town to exit 14. Just north of the exit is the old Spring Hill Cemetery. Enter the main entrance to your right. Then turn right and head to the third left. Once turning left, go to just before the second left, and stop. Look to your right under a tree, and see the Shoulders' Plot. Garden of Crestview - Lot 179, Burial #1 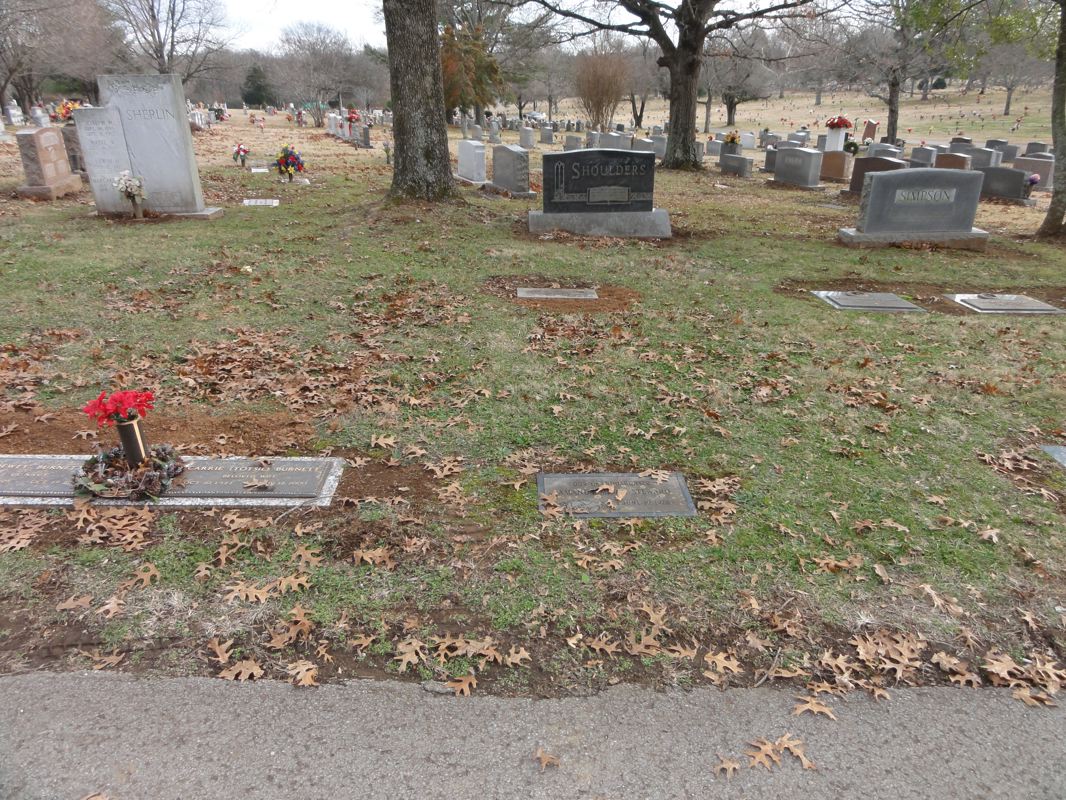 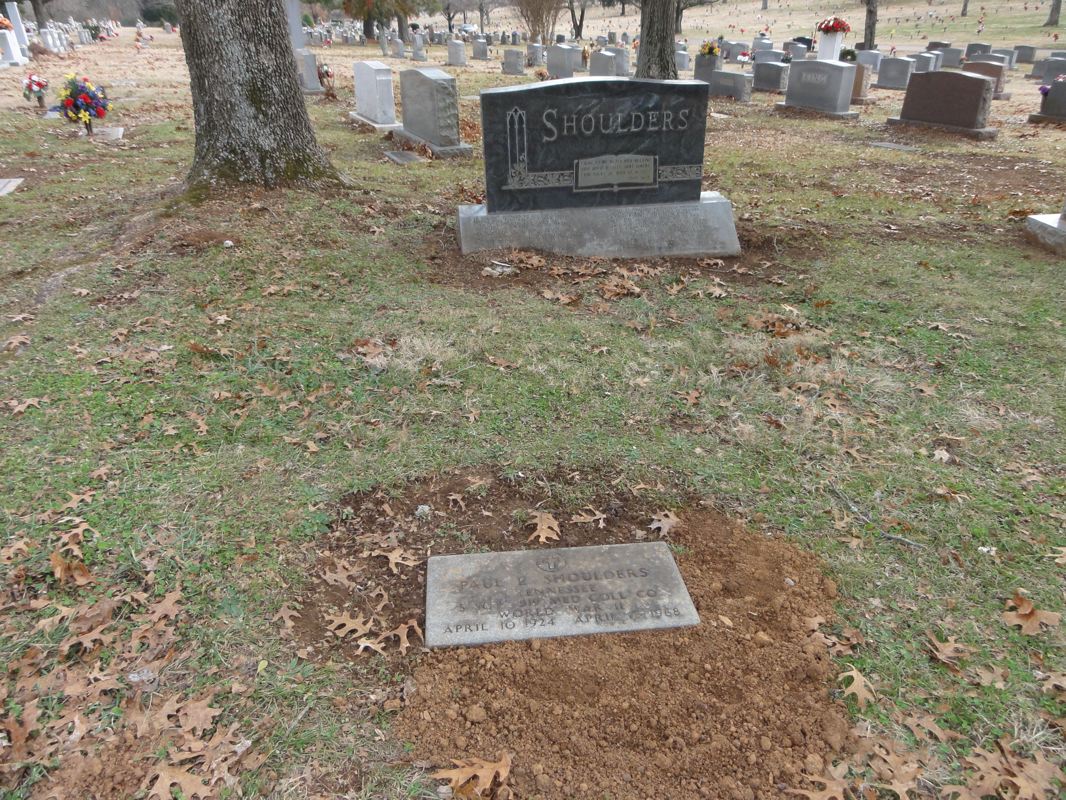 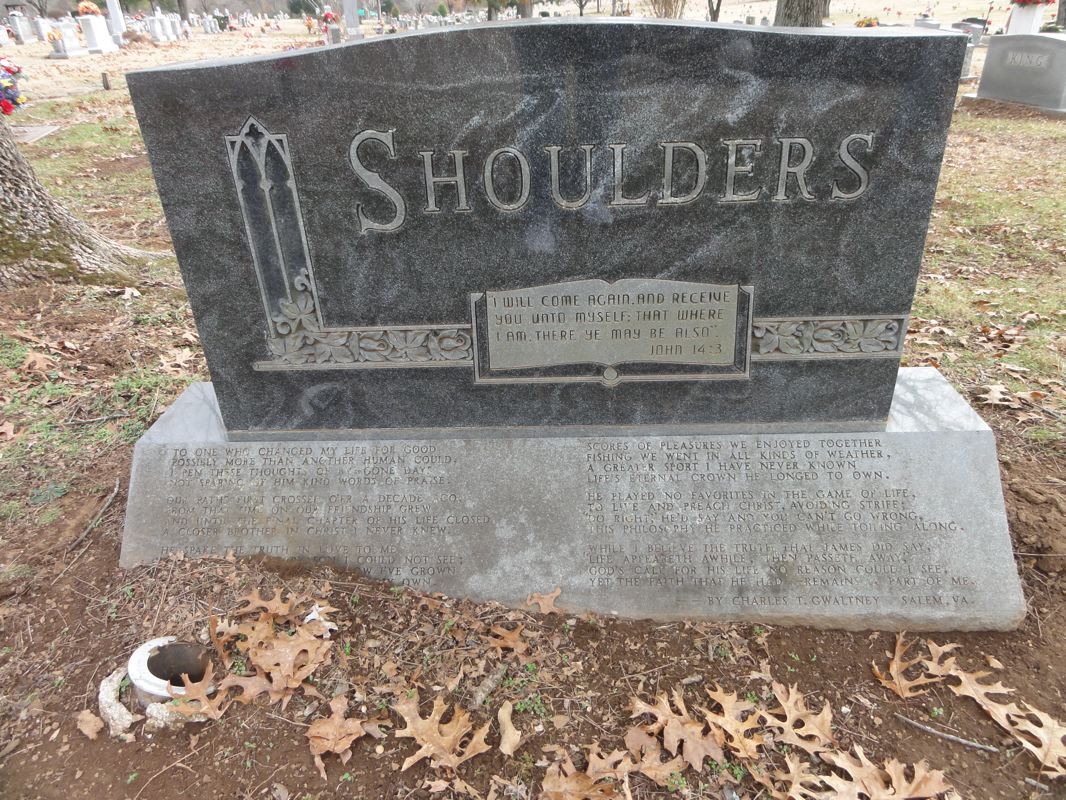 SHOULDERS
"I will come again, and receive
you unto myself; that where
I am, there you may be also." John 14:3

The one who changed my life for good
Possibly more than another human being could
I pen these thoughts of by-gone days
Not sparing of him kind words of praise.

Our path first crossed or a decade ago,
From that time on our friendship grew,
Until the final chapter of his life closed,
A closer brother in Christ I never knew.

He spake the truth in love to me.
When at times the reason I could not see;
Yet now that stronger I know I've grown
His wisdom it's clear exceeded my own.

Scores of pleasures we enjoyed together
Fishing we went in all kinds of weather,
A greater sport I have never known
Life's eternal crown he longed to own.

He played no favorites in the game of life,
To live and preach Christ, avoiding strife;
"Do right," He'd say and you can't go wrong,
This philosophy he practiced while toiling along.

While I believe the truth that James did say,
"Life appeareth awhile, then passeth away,"
God's call for his life no reason could I see,
yet the faith that he had -- remains a part of me. 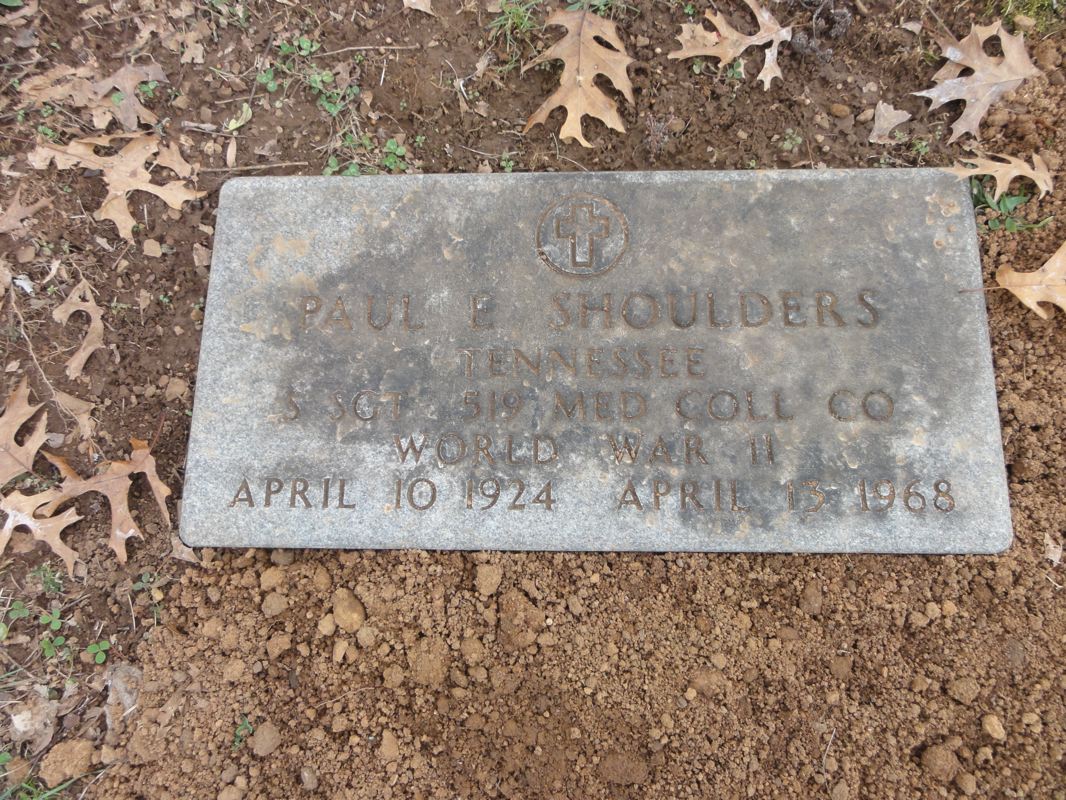