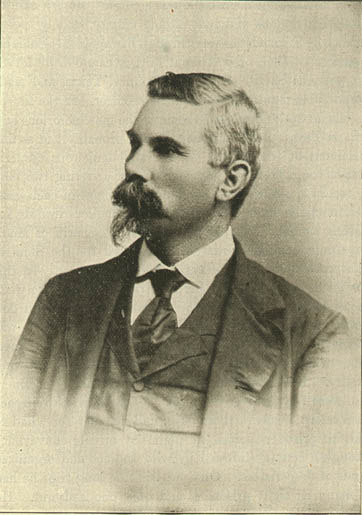 Biographical Sketch On The Life Of Austin McGary

AUSTIN McGARY was born at Huntsville, Texas, February 6, 1846. His father settled in Texas at an early day, fought in the battle of San Jacinto, and guarded Santa Anna the night after he was captured. He was also Sheriff of Montgomery County, Texas, in the turbulent times of long ago, and for twenty years was County Clerk of Walker County, Texas. He was a candidate for the Legislature on the Sam Houston ticket in 1858, but his opponent defeated him by the close margin of three votes, in the counties of Grimes, Madison, and Walker. He died in 1866. The mother of A. McGary died when he was a child.

In his twentieth year be was married to Miss Cyrene Jenkins, who was then sixteen years old. She bad two children—a son and a daughter. The daughter is dead, and the son, Wigfall McGary lives in New Mexico. She died in 1873, and in 1875 he was married to Miss Lucie Kitrell, who bore nine children, three of whom are now dead. She was noted especially for the strength of her faith, the purity of her life, and the constancy and fervor of her zeal as a Christian. She encouraged her husband in every way she could to be a Christian and preach the gospel, and no sacrifice was too great, no burden too heavy, for her to assume cheerfully and gladly to help him in the work of the Lord. She died on June 1, 1897, and her dying request was that he devote his whole life to preaching the gospel.

On June 26, 1898, he was married to Miss Lillian Otey, of Huntsville, Texas, whom he has known since she was a child. He is a man of strong convictions and indomitable energy, and by perseverance he has made his way through life against formidable obstacles. When he was about thirty years old, he served two years as Sheriff of Madison County, Texas, and made considerable reputation as an efficient officer. In the line of his official duties he arrested some of the most notorious outlaws in Texas in the days when Texas probably had as fine specimens of courageous, defiant, and dangerous desperadoes as could be found anywhere. For arresting two men, he received a reward of five hundred dollars in each case, and in many other cases he received smaller rewards for making. arrests. He resigned his office as Sheriff of Madison County and took charge of the work for the State to transport convicted prisoners to the penitentiary. In this service he spent most of his time on the border between Texas and Mexico, where the State had to deal with desperate men. He was assigned to this duty because he was known to be a mail who could be relied upon many emergency which demanded coolness, courage, and unwavering fidelity. He had to transport to the penitentiary prisoners who were convicted at the forts.

There were no railroads in Western Texas in those days, and he, therefore, had to take his prisoners across the plains by private conveyance through a country infested by wild Indians and organized bands of desperadoes. On some of those long trips he had as many as eight prisoners, and only one assistant. He camped on the prairies at night, and often traveled several days in succession without seeing any one but his assistant and his prisoners. He had to guard his convicts day and night, and at the same time be constantly on the alert to avoid hostile Indians and bands of desperadoes, who sometimes followed him, on the watch for an opportunity to rescue their friends from his custody. He served the State in this work two years, and never lost a prisoner. Every convict committed to him was safely landed in the penitentiary. His religious experience began rather late in life. In boyhood and early manhood he was wayward, and at thirty-five he was a skeptic.

He became interested in religion, and, with a desire to know the truth, be decided to carefully investigate the evidences of Christianity. Carrying out this purpose, he began to study the arguments, pro and con, in the Campbell and Owen debate. While he was reading this book, he heard Harry Hamilton preach a series of sermons at Madisonville, Texas. Being convinced by what he read and heard that Jesus is the Christ, the Son of God, he was baptized by Brother Hamilton, December 24, 1881. Soon after he was baptized be began to preach, and on September 1, 1884, he published the first number of the Firm Foundation, a weekly paper issued from Austin, Texas, which now has 9,700 subscribers. He has been the senior editor of this paper from the time it was started to the present. He has also preached extensively in Texas, and has made several tours into other States. His paper has a general circulation in all the States of the South, and many subscribers in other parts of the United States. In addition to his work as editor and preacher, be has successfully managed some important business enterprises.

Note: The article above was written in 1898 when McGary was still living. The Firm Foundation Magazine ceased publication in 2010.

1857
McGary attends the McKenzie Institute, Clarksville, Texas for the first of three sessions.

1860
In December of 1860 McGary marches “side by side” with Normal Kittrell “in a torchlight precession in Huntsville, Texas, screaming for secession.”

1863
Enlists at Camp Gordon Louisiana on 18 September 1863 in Brown’s Regiment of the Texas Calvary.

1866
Austin’s father, Isaac McGary dies on 17 June 1866 at Bolivar point, across from Galveston. Austin is with his father when he dies and buries him in Galveston. The stone that marked the grave is washed away in great storm of 1900. Isaac leaves a large estate, which is divided, among his surviving children, Austin, Fannie and a half-sister Sarah Elizabeth Word later known as Mrs. Burtis.

1866
Austin marries for the first time to Cyrene “Shug” Jenkins, his childhood sweetheart. She was still just sixteen years old.

1869
In a confrontation with the Tora brothers in Midway, Texas, Austin kills one of them and seriously wounds the other brother. McGary fearing the lack of law and order at the time leaves Midway for several months. He finally returns and turns himself in. At his trial he argues self-defense and is acquitted.

1874
Austin marries for the second time on 20 August 1874 to Lucie B. Kittrell, sister of his friend Norman Kittrell.

1877
While trying to arrest a suspect is forced to shoot him to death.

1878
Resigns as Sheriff of Madison County and takes a job transporting prisoners.

1884
The first issue of the Firm Foundation appears in September. The new paper is published from Austin, Texas.

1886
J. D. Tant is re-baptized and joins forces with A. McGary and the Finn Foundation.

1899
Valid Baptism, a debate between Austin McGary and T. It Burnett is published.

1901
Close friend J. W. Jackson dies. At the time of his death he owned the Firm Foundation, but McGary held the editorial control.

1903
First issue of McGary’s new paper, The Gospel Outlook is published on 15 September 1903. McGary moves his family from Austin to Los Angeles, California arriving in LA on 23 December 1903.

1904
McGary moves to Eugene, Oregon arriving on 3 June 1904. Lilian Otey McGary writes in her diary that her husband “has a way of making people love him.”

1905
McGary’s Burlington Treatment exposed as tar water. McGary suspends The Gospel Outlook and gives its subscription list to The Eye-Opener. On 4 September McGary sold his place in Eugene, Oregon and returns to Texas, wintering in Bryan, Texas.

1912
Edits Hammer and Tongs from Houston, Texas, a secular monthly in which McGary discussed his views “concerning State-wide prohibition.” Towards the end of this year McCary writes a series of articles on Adventism for the Eye-Opener.

1913
McGary becomes a writer and then an editor (along with W. D. Ingram) of The Faithful Witness, a weekly published from Houston, Texas.

1914
McGary becomes the publisher and editor of The Open Arena, a Houston monthly.

1921
McGary-Douglas Debate: A Discussion of the Christian’s Relationship to Civil Government is published by the Apostolic Way.

1923
McGary apologizes to David Lipscomb’s personal friends and the brotherhood in general for the things he said about Lipscomb. McGary begins to write articles for the Gospel Advocate 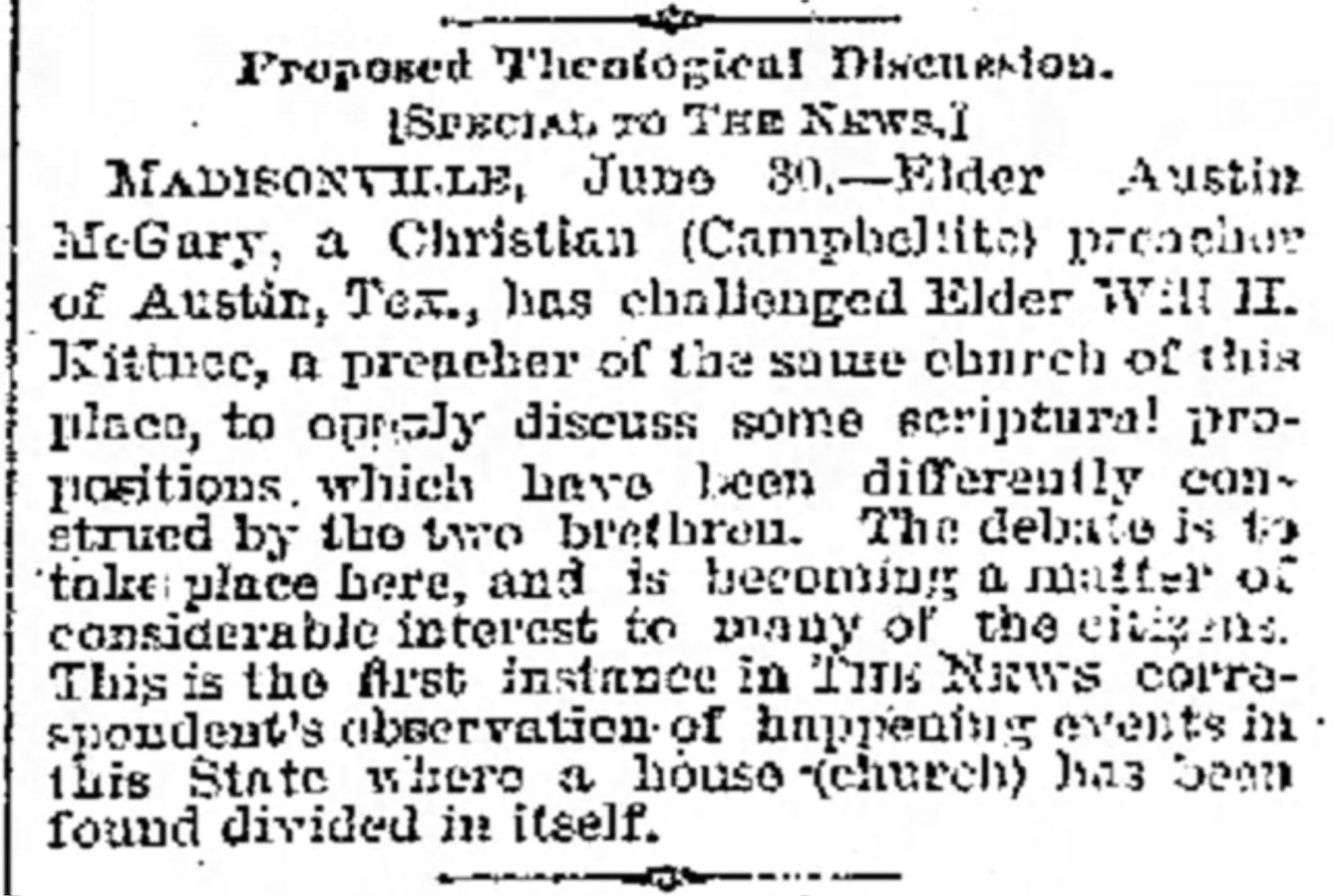 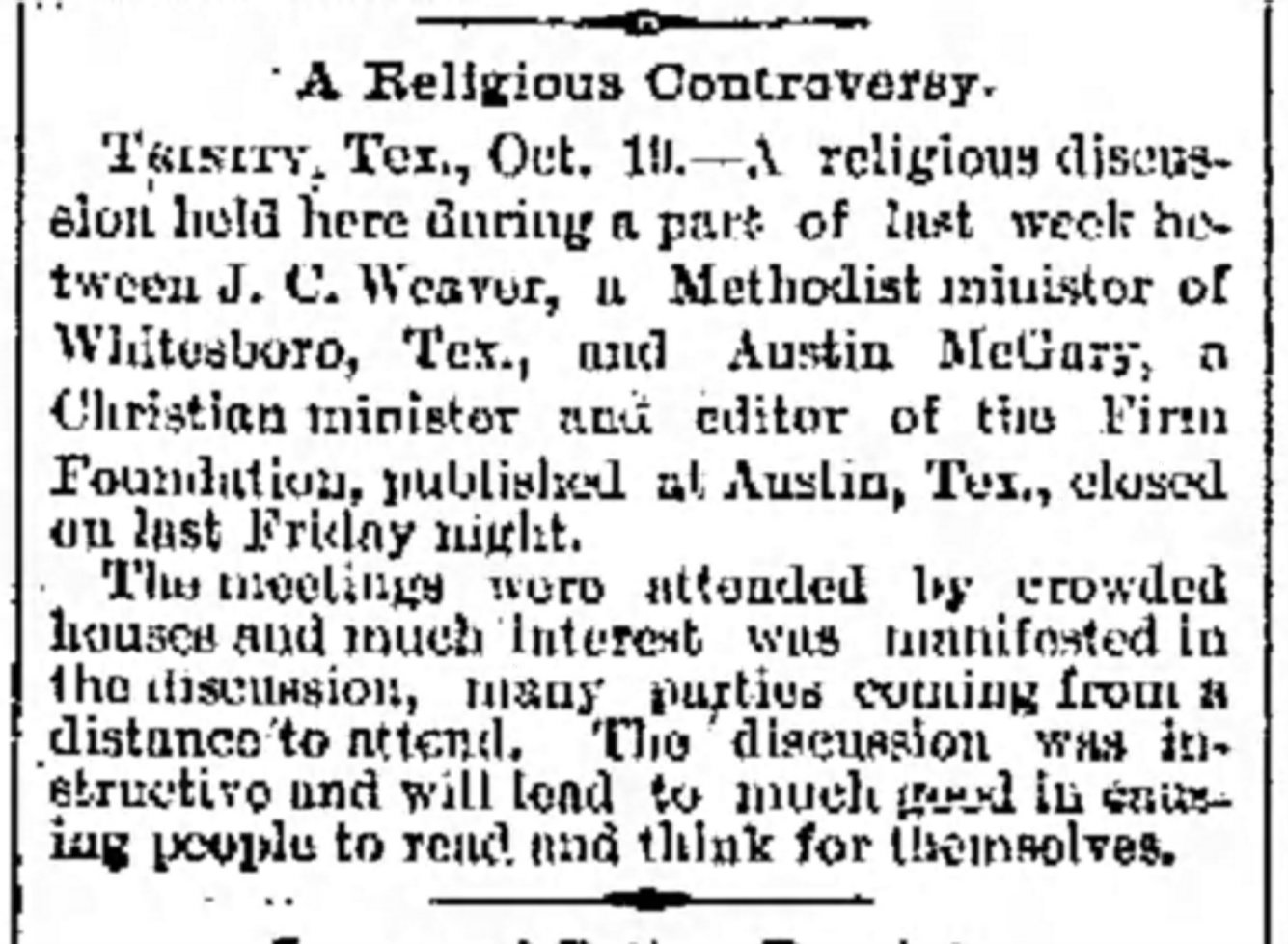 Horton Commercial, Horton, Kansas
Thursday, July 23, 1896
Note: This made the newspapers across the mid-west US

McGary is buried in the Oakwood Cemetery in Huntsville, Texas. Huntsville is located between Dallas and Houston off I-45. From I-45S take Exit 114. Go to the traffic light and turn left on to FM RD 1374 (Possum Walk) Cross the interstate at go several miles, (two or three) tot he next main intersection. At the light turn right on to 75. Get in you left hand lane and turn left at the next light on to Sycamore (There will be a Texaco Station at the turn) Go through two four-way stops. Once you cross the railroad track you'll come to a traffic light (Sometimes it blinks as a caution or stop light). Turn left and get into the right lane. At the next traffic light turn right on to Ave. F. The next street will 9th St. You will need to go just past 9th St. and turn left into the cemetery. Park in curve under the old cedar tree. Take the gravel path next to the tree, and go down the path as if you are going to the grave of Sam Houston. Just before the path becomes paved go off to your right and look for the plot. It is facing west. In front of the plot is another plot with and Iron fence surrounding it.

Note: Be sure to see the grave of Sam Houston while in this cemetery.

NOTE: Gen. Sam Houston had no connection to the Restoration Movement to our knowledge. However, when this great fighter for Texas Independence was wounded at the battle of San Jacinto, 1836, his doctor in attendance was Restoration preacher Dr. Mansil W. Matthews. 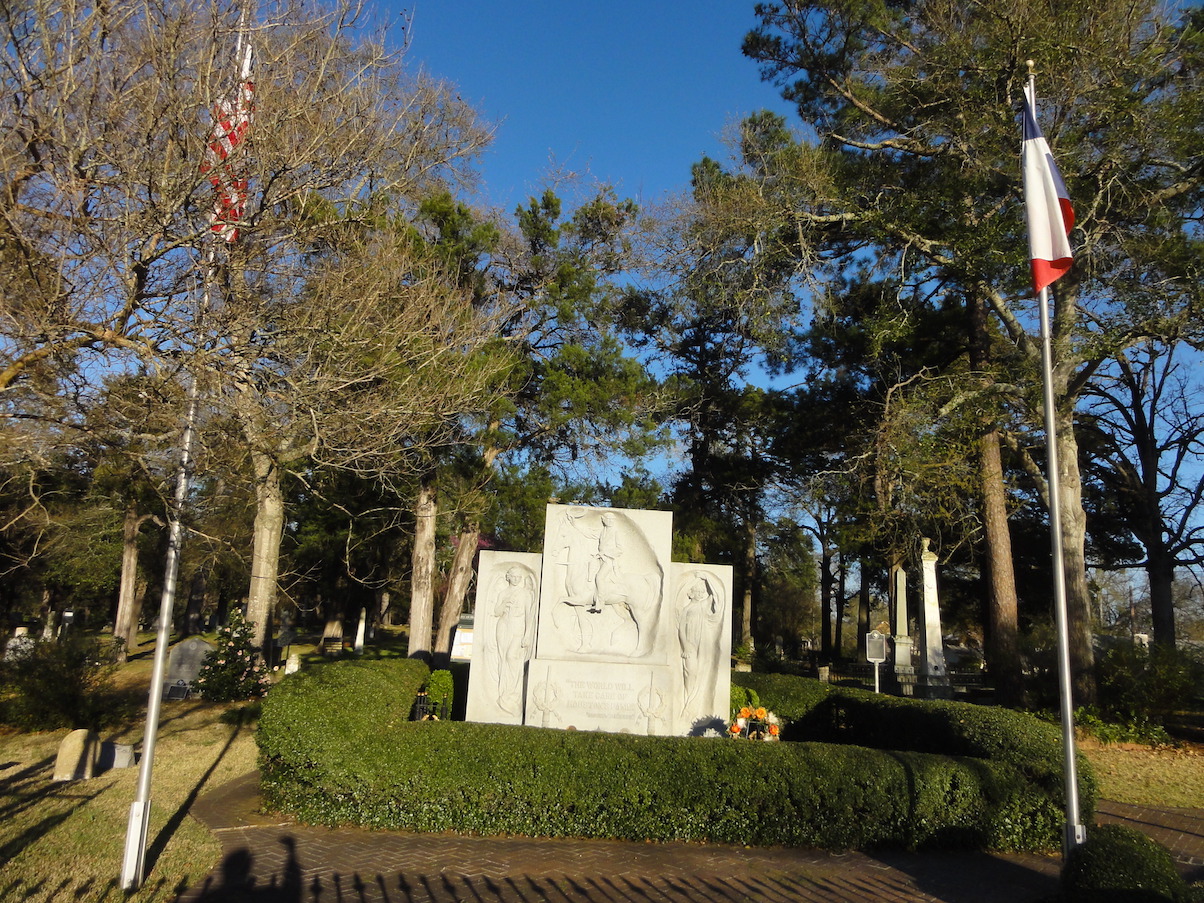 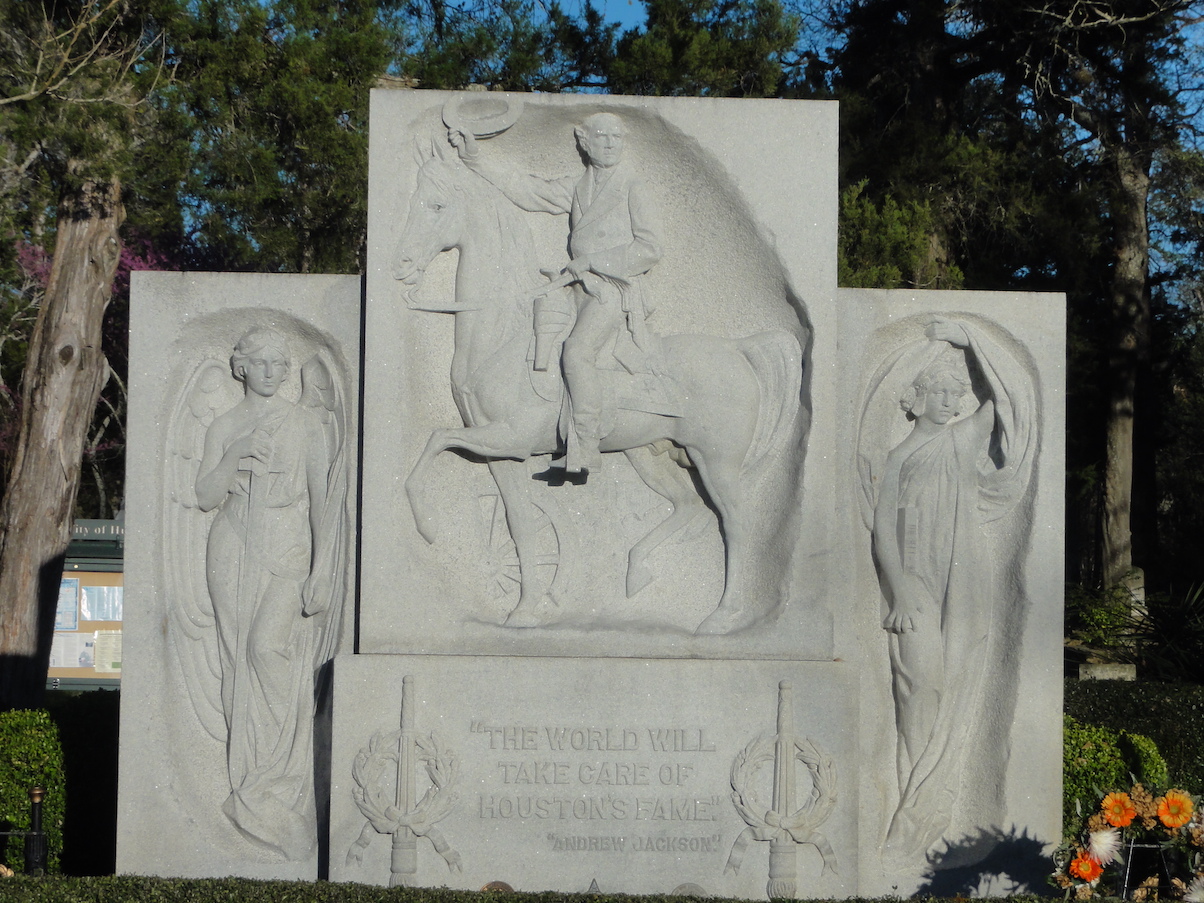 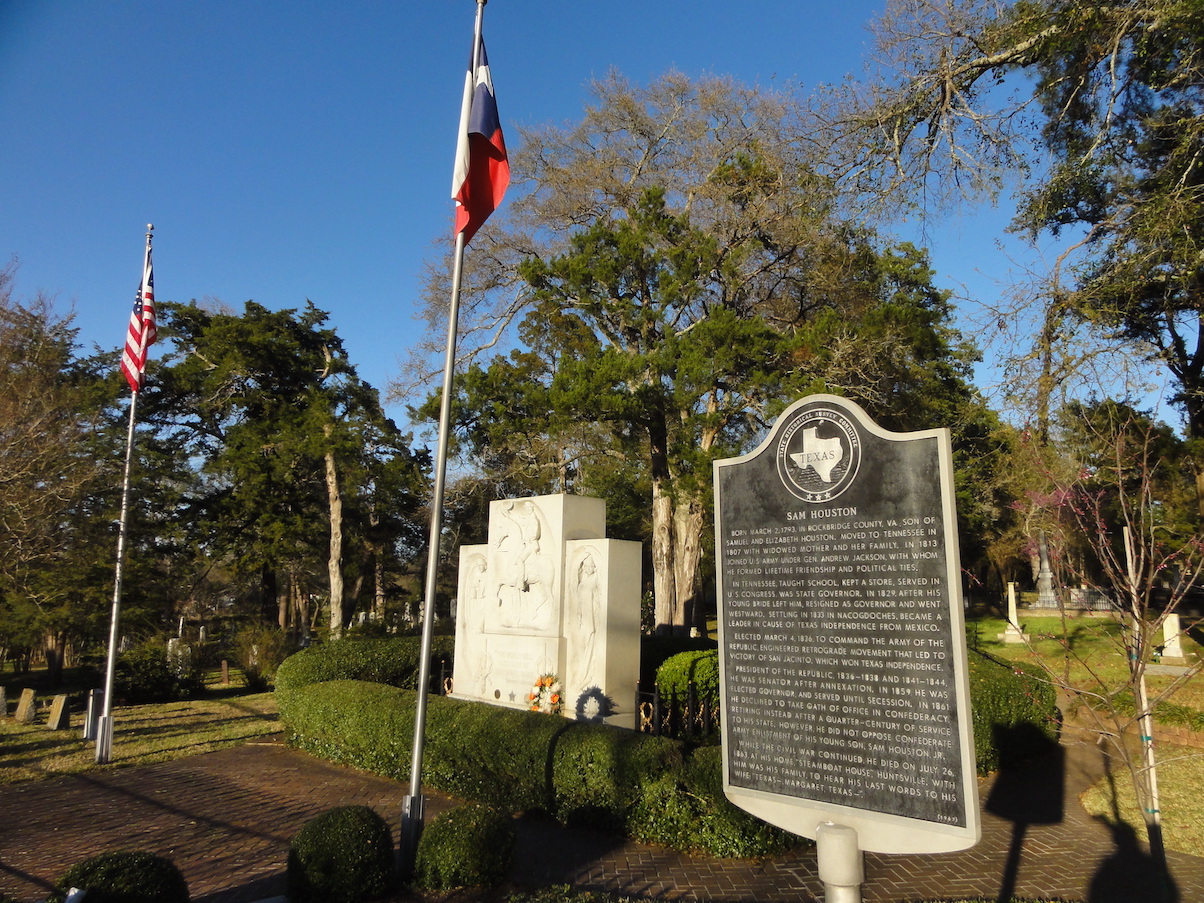 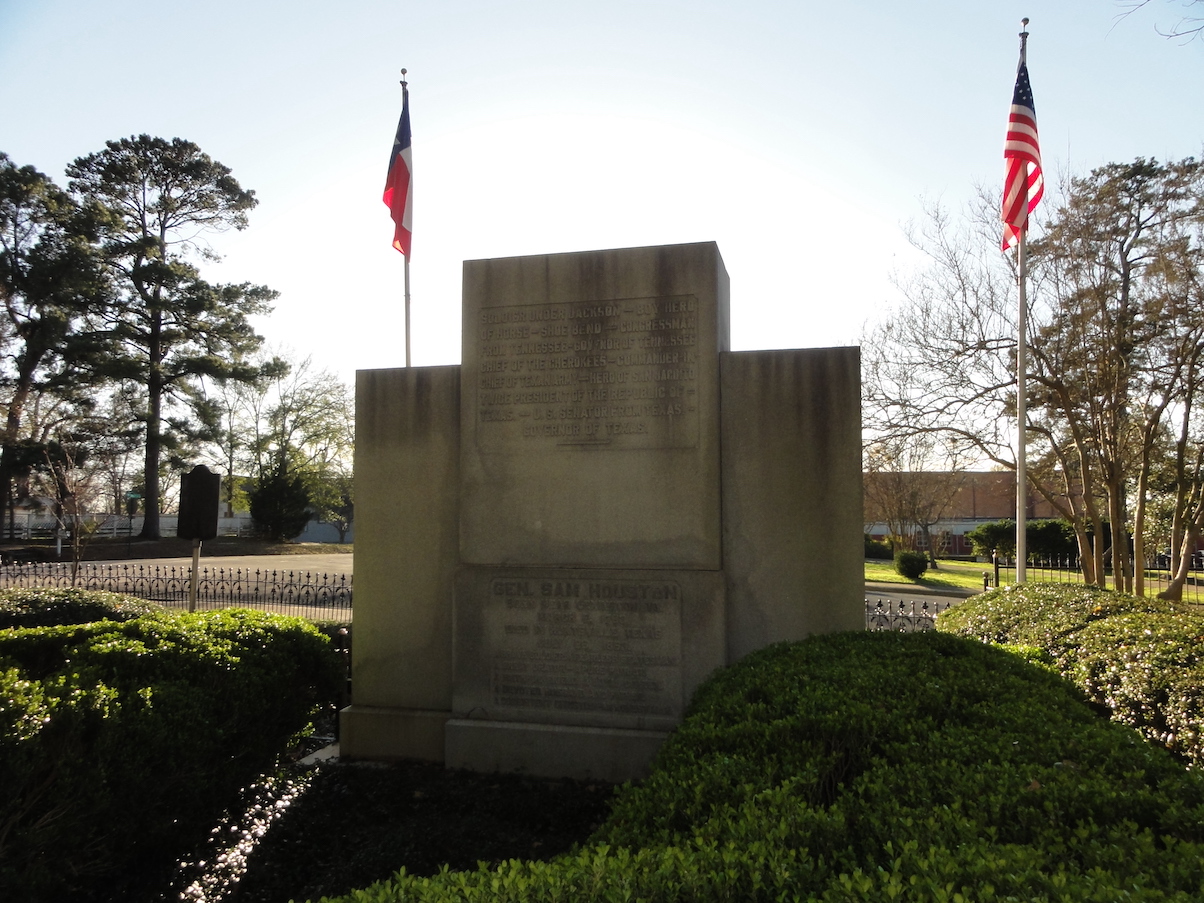 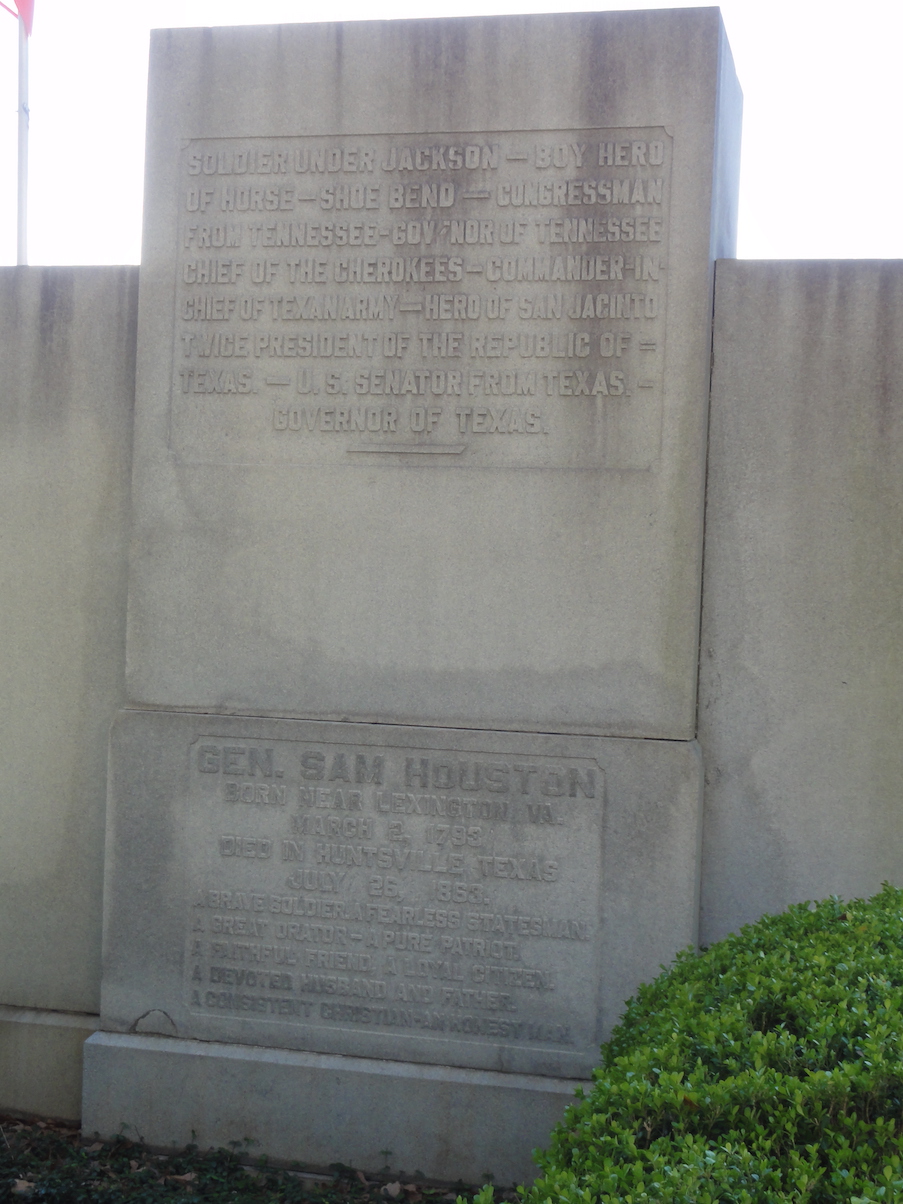 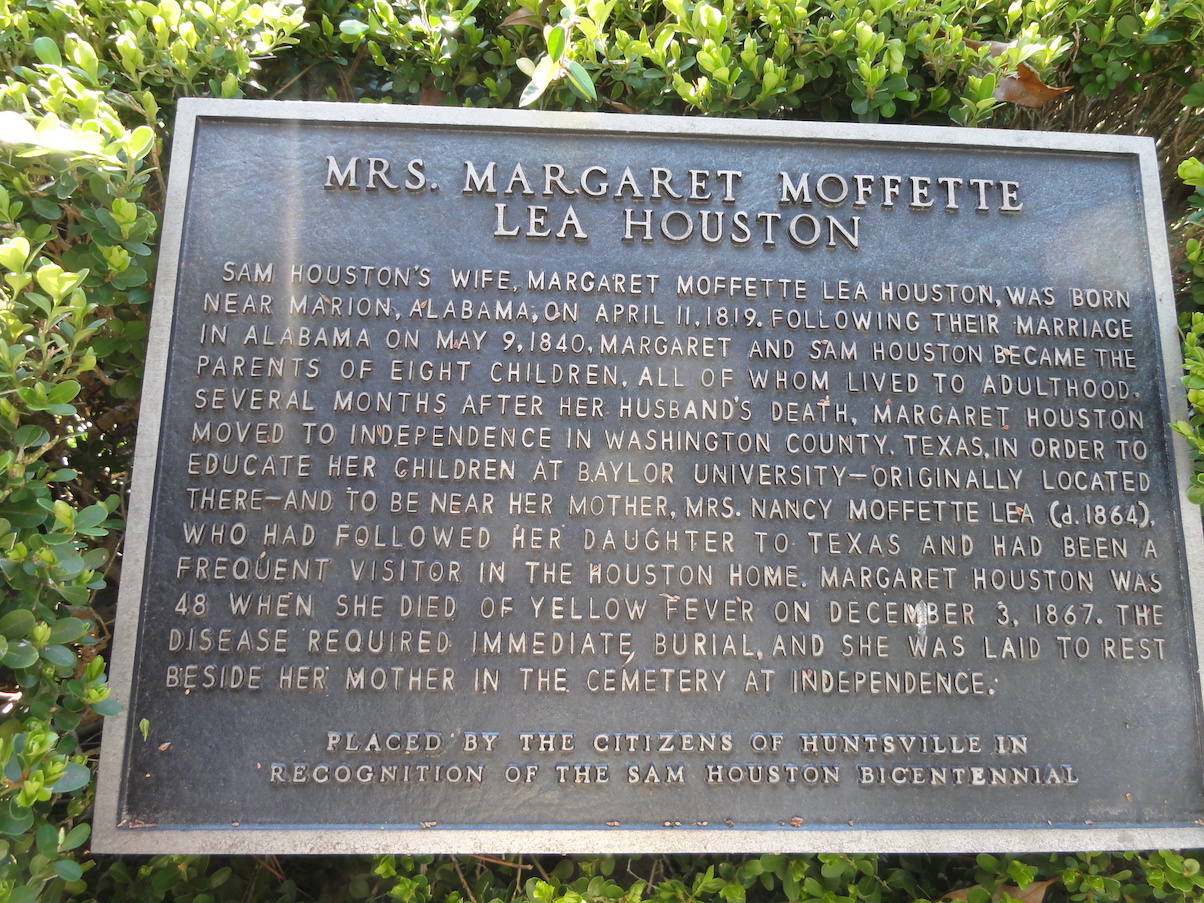 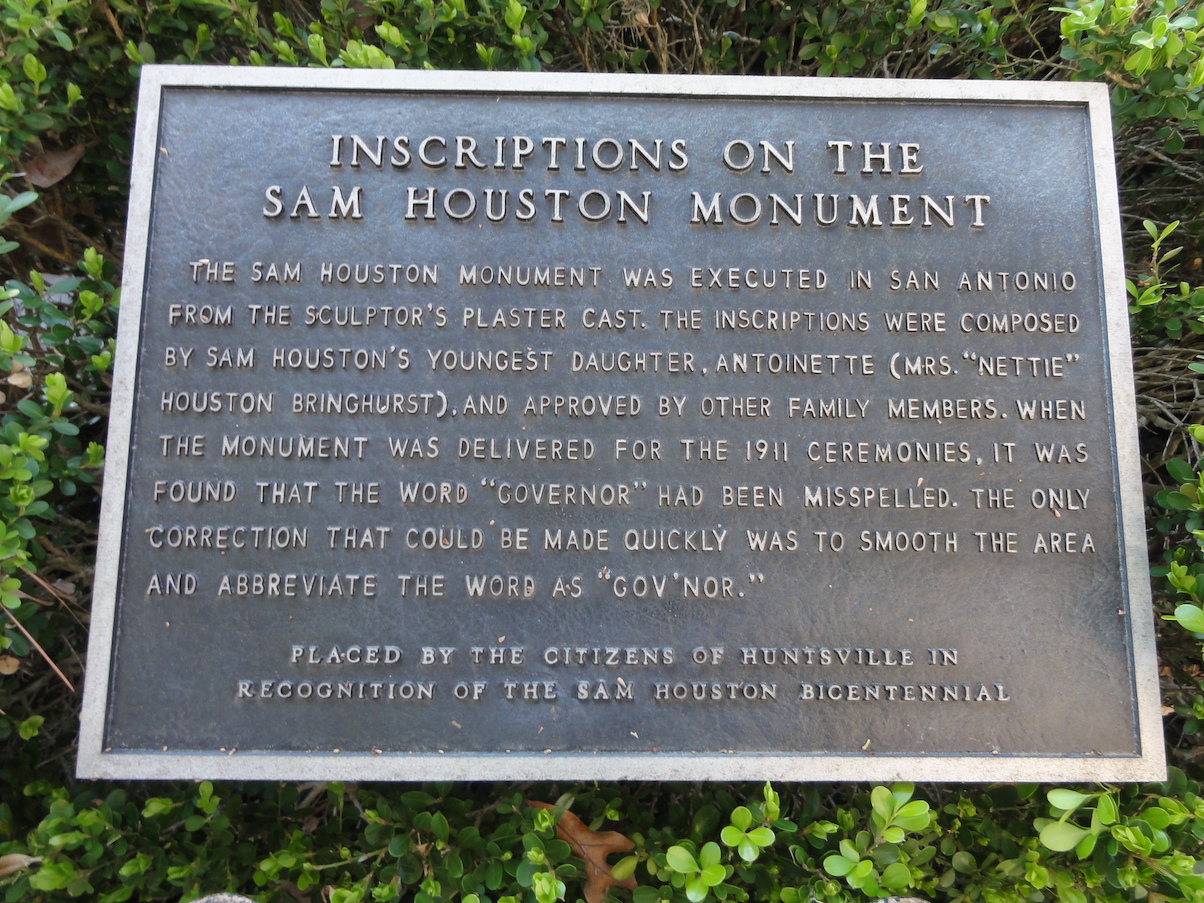 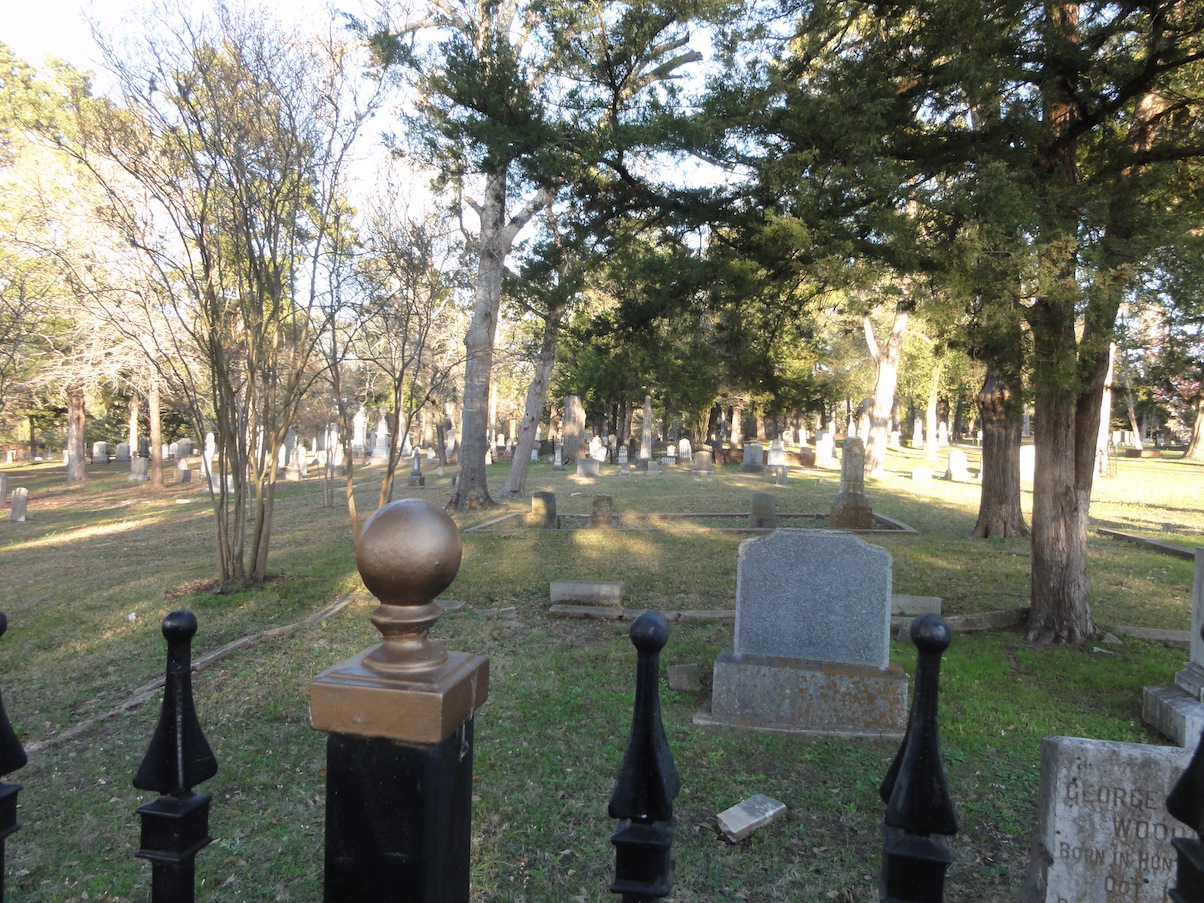 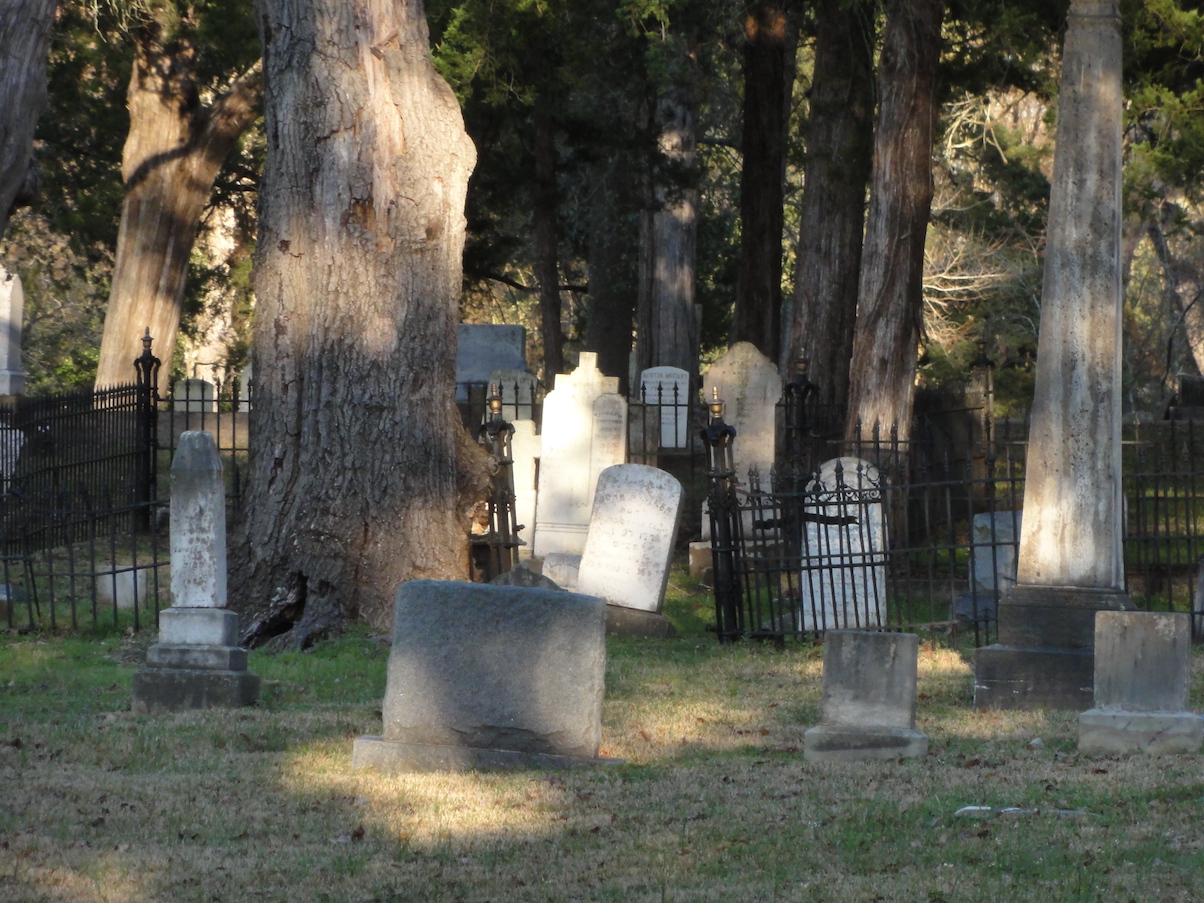 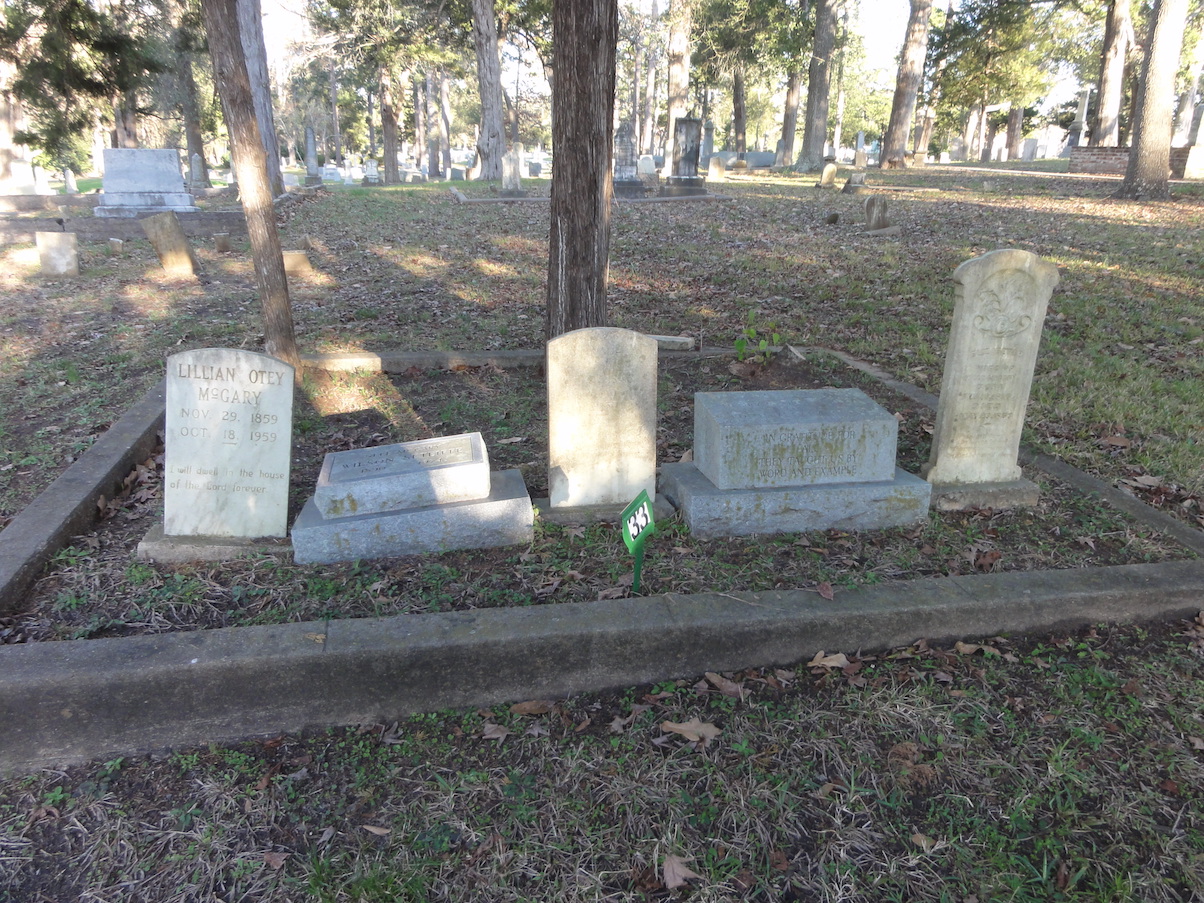 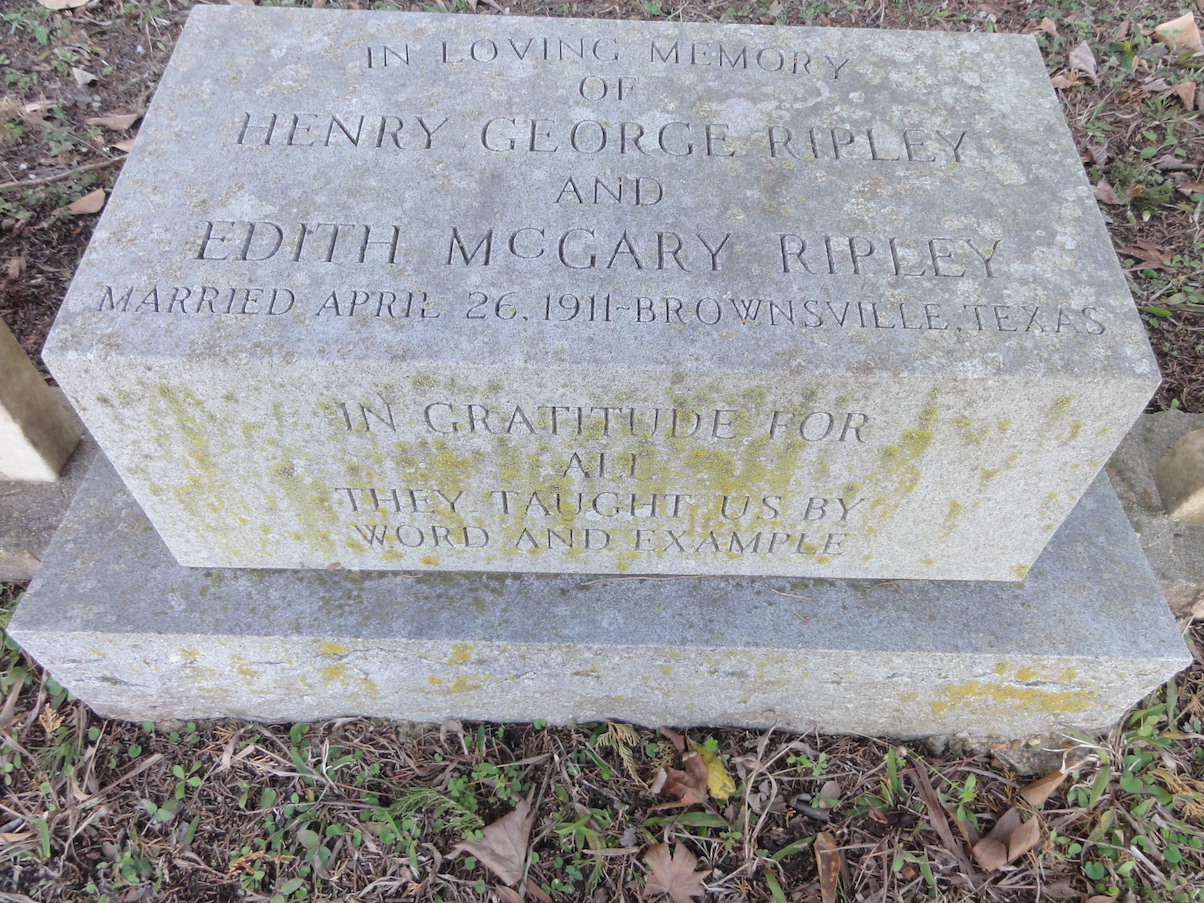 Henry George Ripley
And
Edith McGary Ripley
Married April 6, 1911, Brownsville, Texas
In Gratitude For All
They Taught Us By
Word And Example
Note: Edith Kittrell McGary Ripley was daughter of Austin McGary and his second wife Lucie Bettie Kitrell (1856-1897) 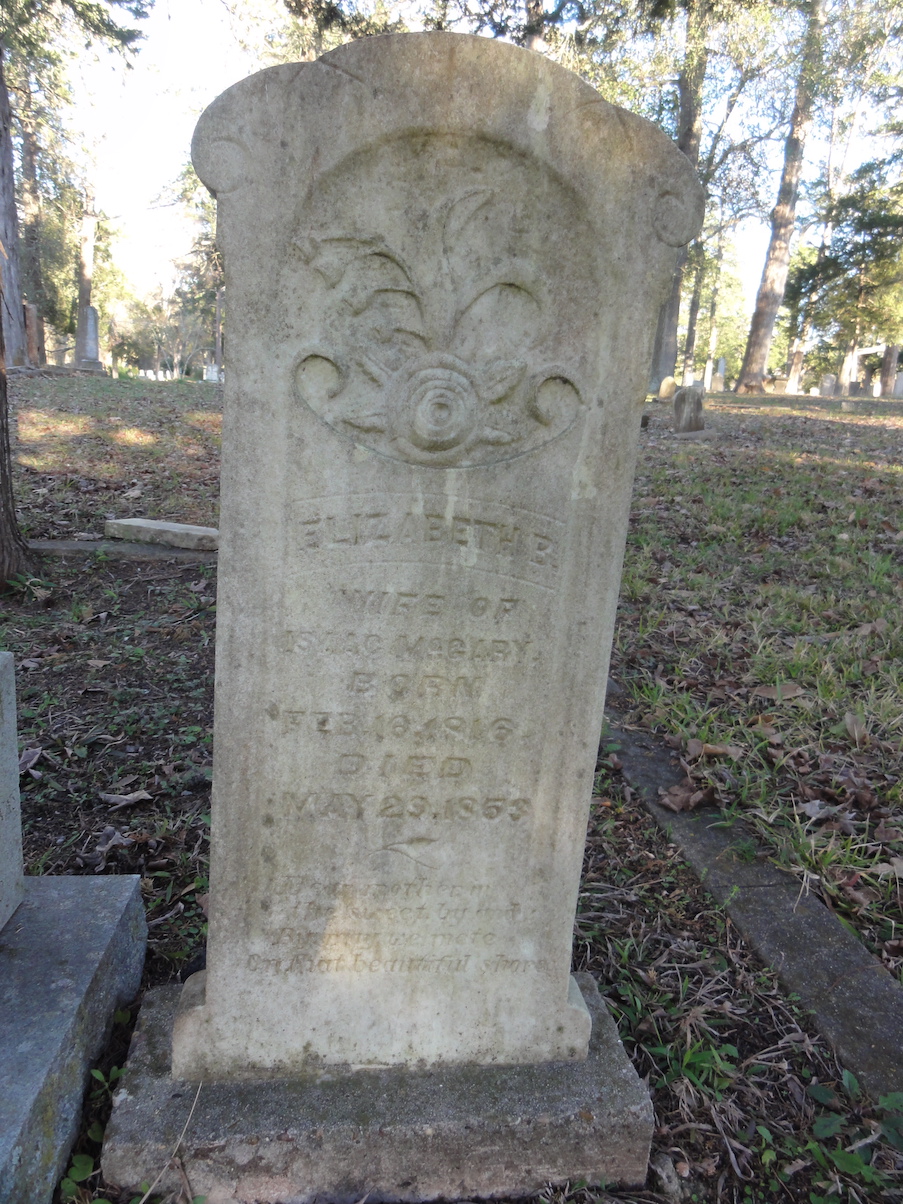 Elizabeth
Wife of
Isaac McGary
Born
February 10, 1816
Died
May 23, 1853
Our mother in
the sweet by and
By may we mete
On that beautiful shore
Note: Elizabeth Brazelton Viser McGary - Mother of Austin McGary Father Isaac McGary (1800-1866) is buried at Galveston, Tx 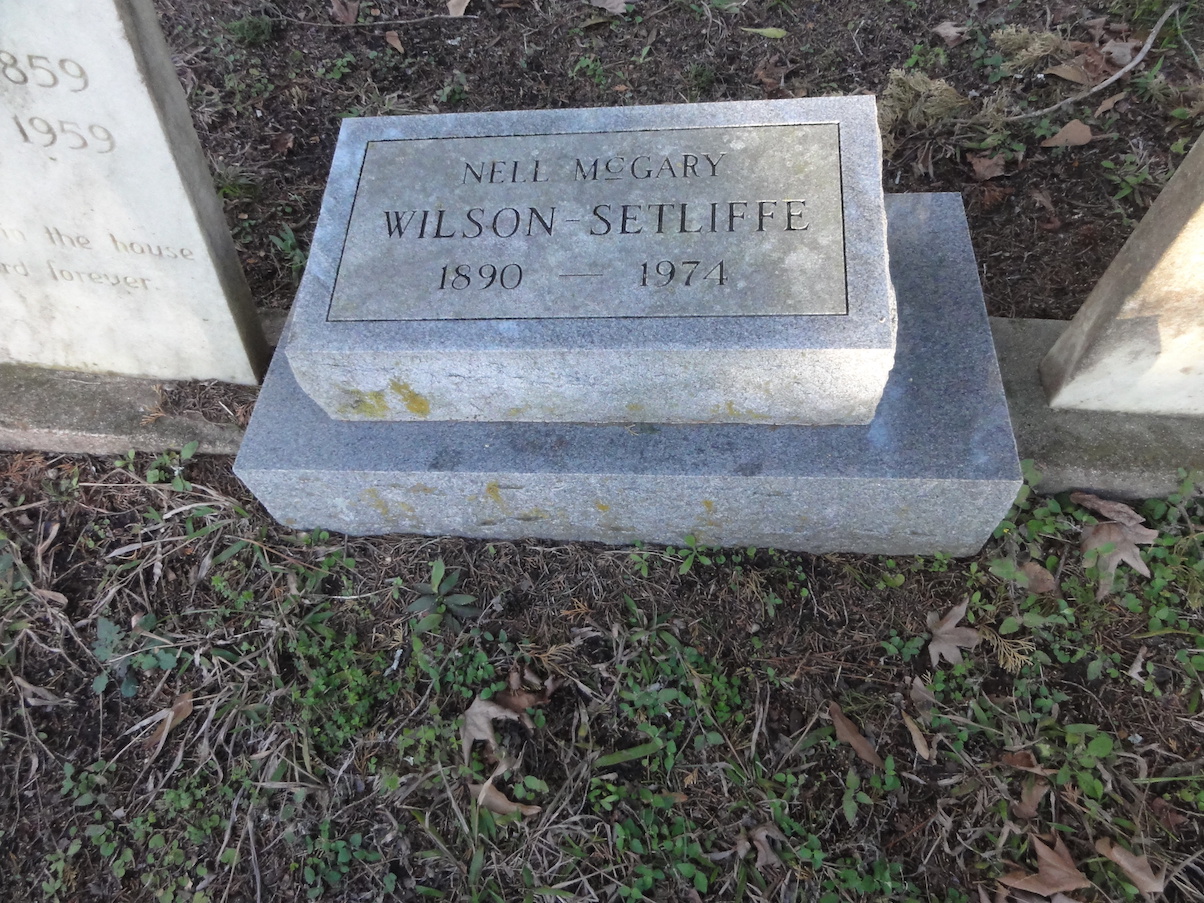 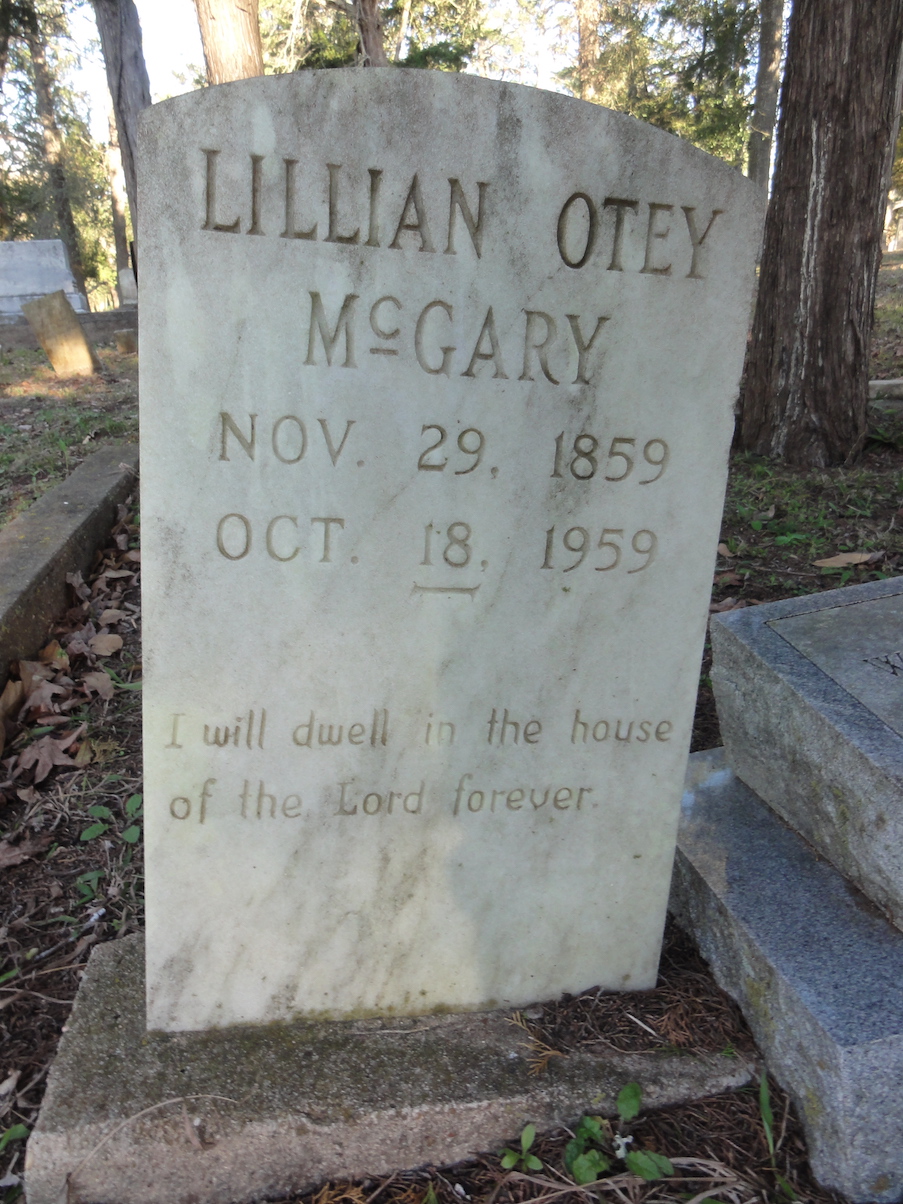 Lillian Otey McGary
November 29, 1859
October 18, 1959
I will dwell in the house
Of the Lord forever
Note: Lillian T. Otey was the third wife of Austin McGary 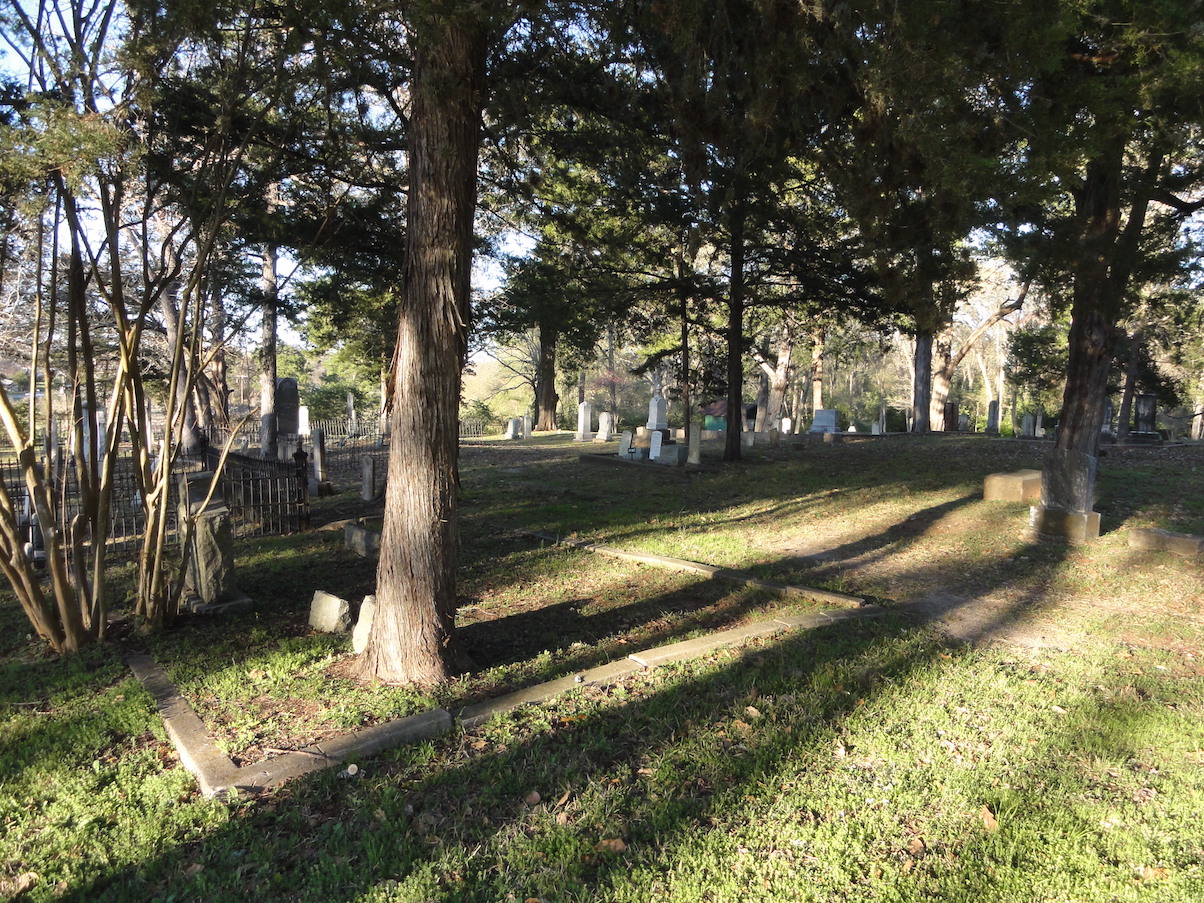 McGary Plot From A Different Direction - In Distance Center 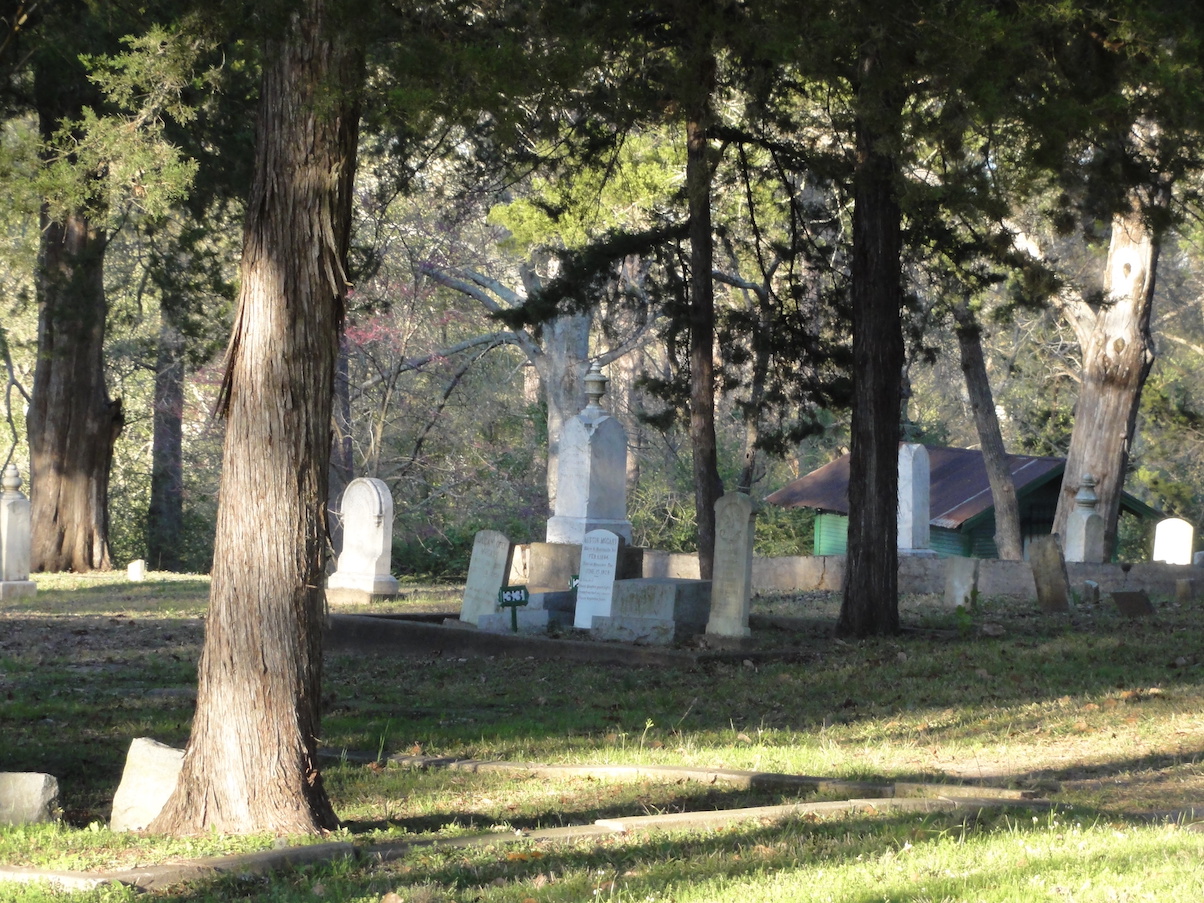 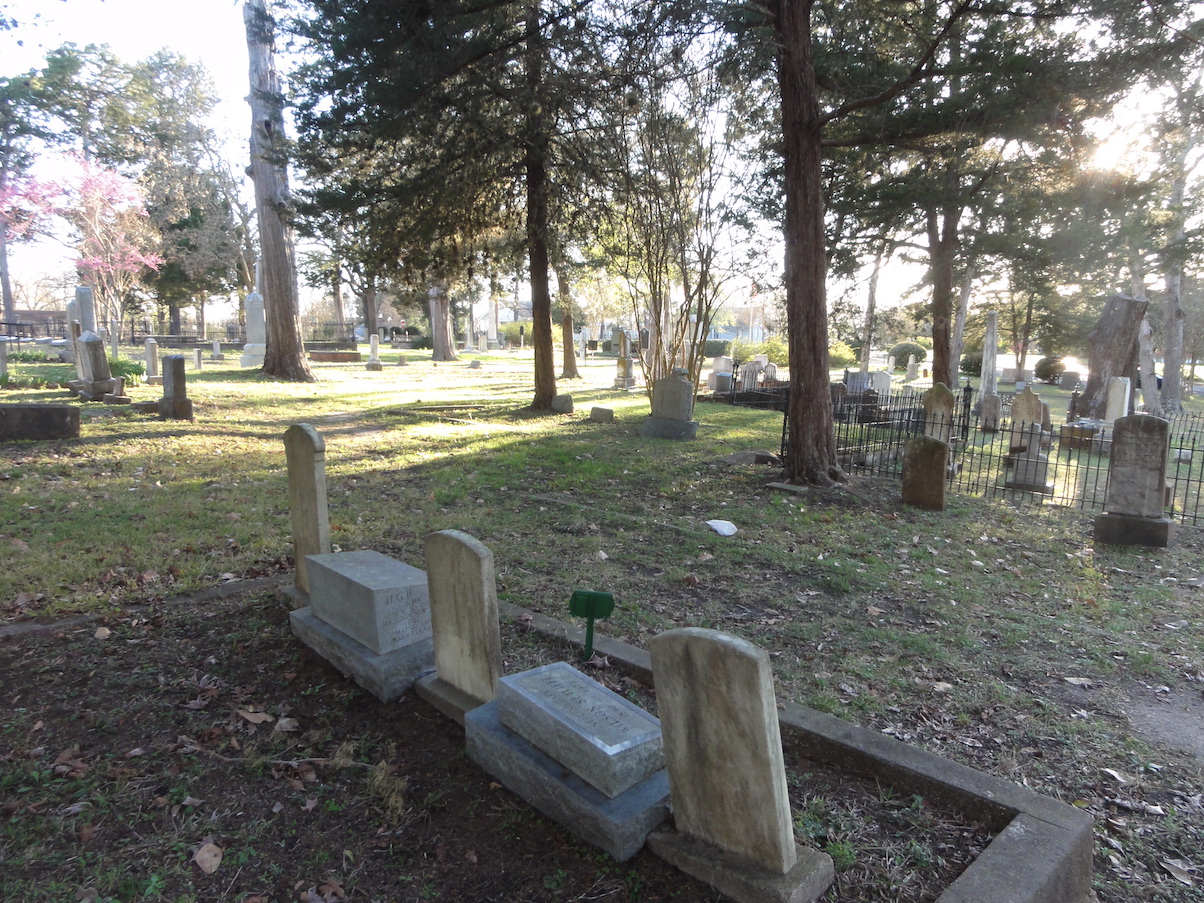 Looking Back Toward Gen. Houston Monument From McGary Plot 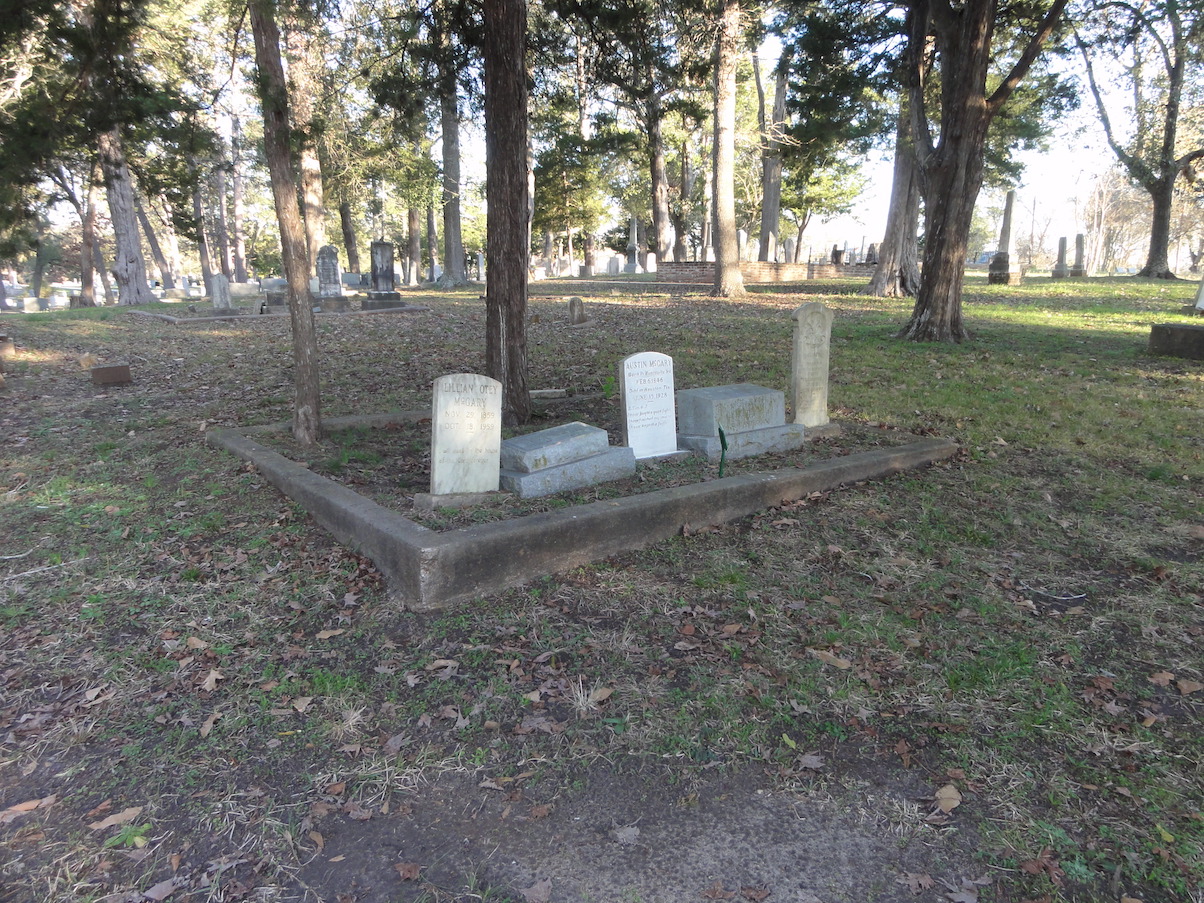 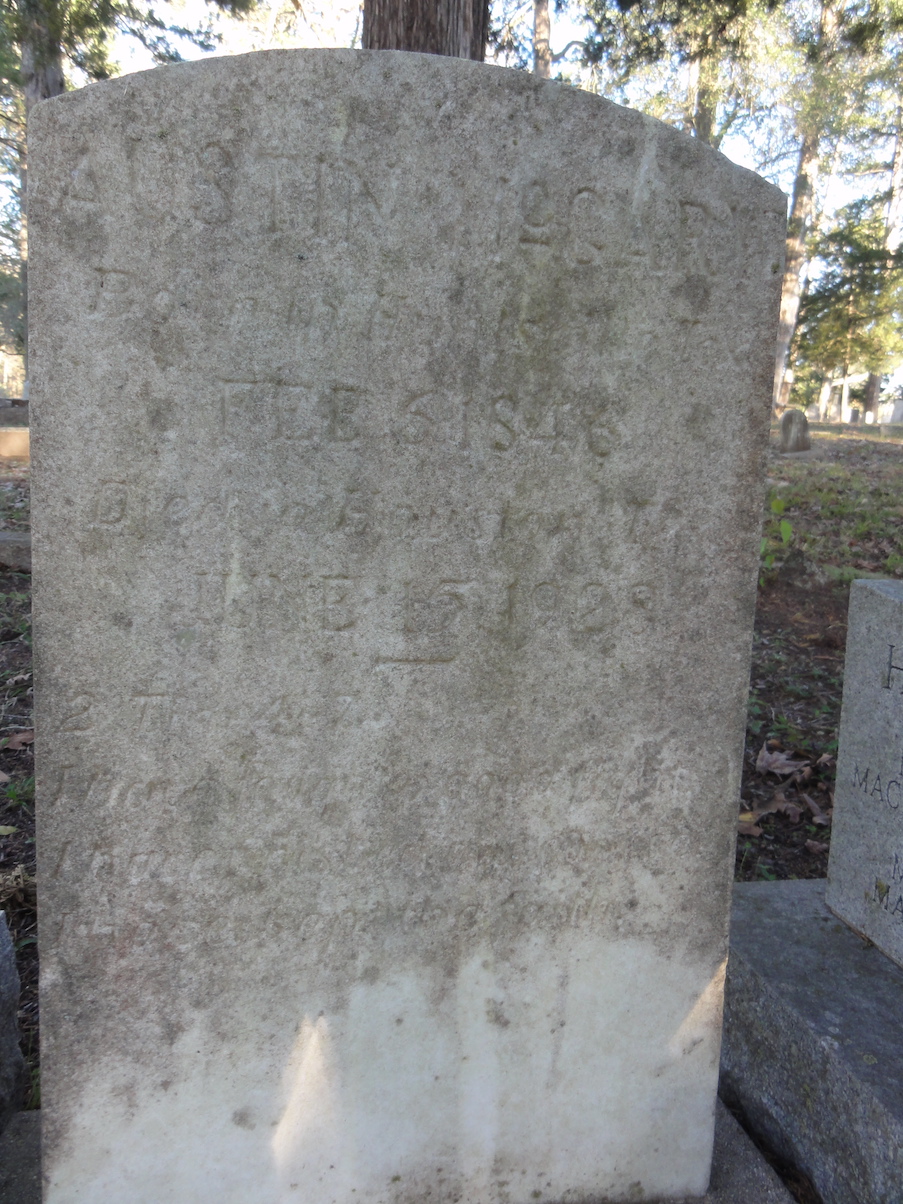 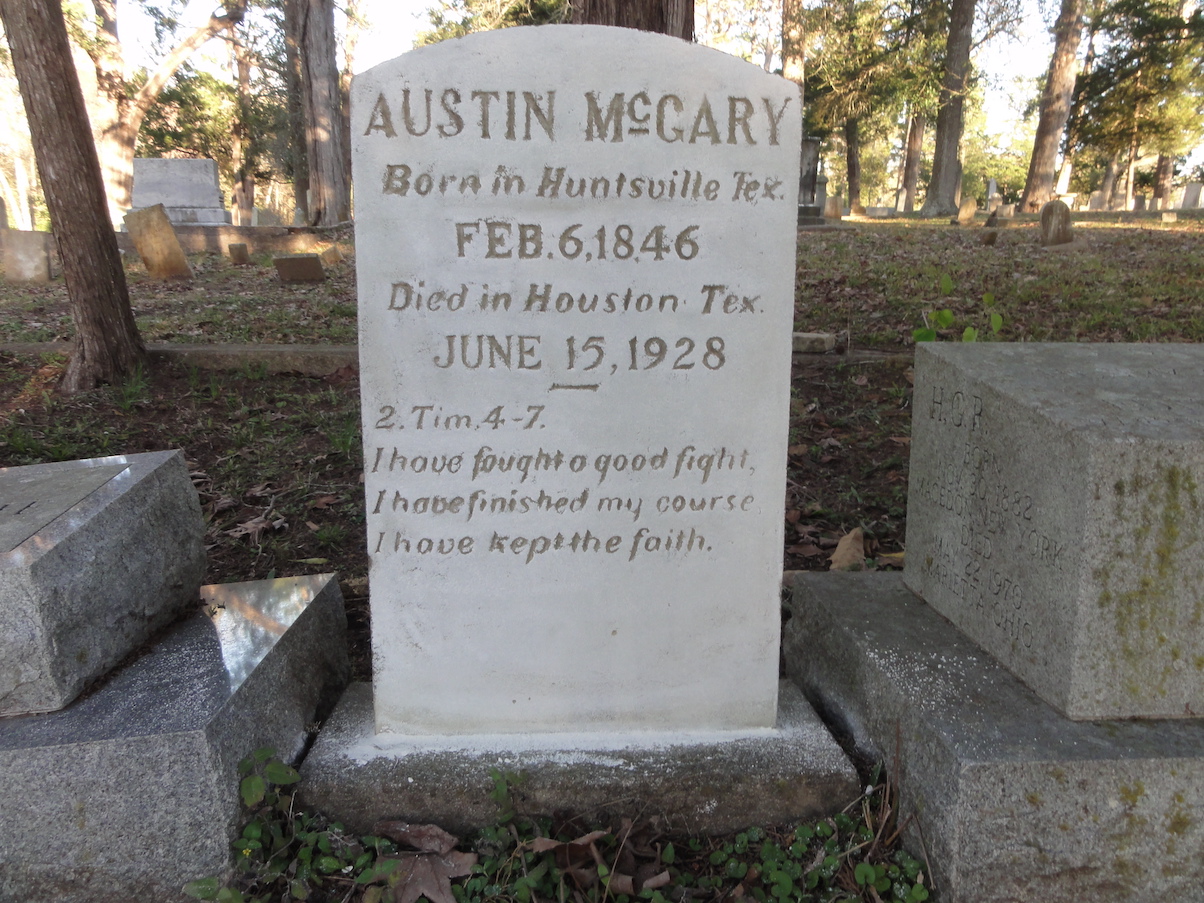 Special Note: Traveling to College Station, Texas in March of 2015, I was there to be with our daughter and son-in-law who was preparing to go to Cambodia to conduct mission work. While there I was too close not to make the trip to Huntsville to find the grave of Austin McGary. Inspiring opportunity! I was interested to see how close his grave was to that of General Sam Houston.