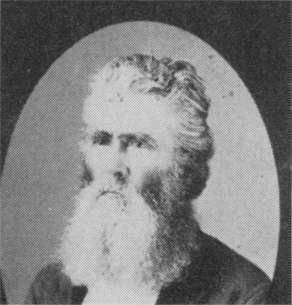 A Letter From A Granddaughter

I have received your card and also the clippings. Thank you for such a prompt reply. I shall be glad to tell you something about Grandpa.

Joseph Brice Wilmeth was born of William and Mary (Crawford) Wilmeth in North Carolina, Sept. 11, 1807. My cousin, Lillard Wilmeth of Philadelphia, who has made an intensive study of the Wilmeth family tree, and who was sent by president Wilson to Europe to take relief to stranded Americans there at the outbreak of the war, giving him. opportunity to also study it there, found that Grandpa's grandfather came over to America from Ireland for the purpose of obtaining religious freedom.

When Grandpa was but a boy he came with his parents to McNairy County, Tenn. There December 26, 1826 he married Nancy Ferguson, daughter of James and Martha (Hogge) Ferguson. Her birthplace was on the Caney fork of the Cumberland River near Sparta, Tennessee. Her ancestors came from Scotland. She was the granddaughter of Col. Ferguson of Kings Mountain fame. She was a tiny little woman, but she was full of wisdom, and she was the power behind the throne in Grandpa's life. Her children adored her. My mother who has lived on three continents, says till yet that "Mother Wilmeth" was the grandest woman she ever knew, far excelling her own "high-falutin" kin.

In 1831 Grandpa with several other kindred families moved to Smithville in Lawrence County Arkansas. Here for about 14 years he was a very busy man. My father writes of him thus: "He rafted timber to New Orleans, became village blacksmith, served as United States soldier, escorting Choctaws and Chickasaws from Mississippi to Indian Territory, farmed, raised live stock, served as clerk of the courts, preached the gospel. This last was the unexpected, but he learned from some Arkansas preachers a practical gospel and he soon determined that it was his duty to preach it to others. This he did without money and without price and without serious interference with other business, for he made his own house a chapel for Christian teaching and worship, to which his neighbors were often invited on Lord's days and nights."

In1845 Grandpa got hold of a pamphlet telling about the broad and fertile prairies in the Three Forks of the Trinity, located in Peter's Colony. It also told of the grant of title free to one mile square of land to every head of a family locating there. Thereon Grandpa determined to possess himself and family of a home in Texas. He took with him two other families and two young men, but he furnished almost everything himself. There were six wagons, some with oxen, some with four horses, and some with oxen and horses combined. There was also Grandmother's carryall drawn by one big horse. There were 40 head of loose stock and 100 head of sheep. Papa, then 10 yrs. old, rode horseback and drove the sheep. They set out in October.

In those wagons were plenty of guns and ammunition, all kinds of farm tools, a complete set of blacksmith tools, plenty of heavy, homemade bedclothes, Grandmother's spinning wheel and loom, and provisions for all the company for six months or more. There route led by Batesville and Little Rock, Clarksville and Paris. Paris was then called Pinhook and had about a dozen cabins. There all signs of civilization ceased, and they struck out across the prairie trying to follow a dim old wagon way called the Military trail.

They camped on the banks of the Trinity at Dallas not far from where the Union Terminal now stands the day after Christmas, 1845. There were only three houses standing. Thinking that Dallas was not to be the county site, all the others had been moved away. John Neely Bryan's house was there.

They selected their headright near where Grand Prairie now stands. They built a. good house of hewn logs. They moved in Feb. 14, but they did not dare have a light in the house at night for fear of the Indians. My half-sister, Mrs. Malone, was telling me this evening that Grandma told her that the Indians used to come there and get her two youngest children and take them off. She didn't dare let on like she cared. She didn't know what they might do with them but she knew it wouldn't do to oppose them. They would take them out on the prairie awhile then they brought them back, saying she was "much brave." Fear of the Indians increased until they left their headright there, fine growing corn and all and began to drop back to stronger settlements east of the Trinity.

It was then Grandpa would have gone on back to the poor hills of Tennessee. When they camped within a few miles of the eastern boundary of Peter's Colony, she (Grandma) determined never to cross this boundary. She had seven sons and three daughters. At breakfast, after a few tears she told Grandpa that while she lived her children should never be carried back to Arkansas or Tennessee, and within the bounds of Peter's Colony should her body be buried. Grandpa was submissive. Within a week he purchased for $600 the claim of Moses Wilson two miles north of the McKinney court house, and there stands the old house today fronting west on the paved highway passing from McKinney to Sherman.

One of the first things Grandpa did was to seat an old blacksmith shop in the back yard with split logs and use it for a church meeting place. To this he invited his neighbors. Aunt Martha told me that a preacher came to Grandpa telling him how badly he had been treated, that where he had been they wouldn't let him preach. Grandpa gave him permission to preach in his blacksmith shop. The man was preaching away when he remarked that there were "infants in hell not a span long." Grandpa rose up out of his seat, pointed a stern finger at him and said, "Stop that! Stop that! You can't preach that under my roof."

In later years Grandpa built an upstairs to his home with the stairs reaching it from the outside. This he seated and for a long time used it for a church meeting place. He boasted that he never accepted a dollar for preaching in his life. He was always highly offended if anyone offered him anything. I'll quote what Papa said about the church in his house: "As in Arkansas, so in Texas, Father made his house a place of Christian teaching and worship. In 1847 he organized a church it. his house. He built an upstairs to his house and put a stairway on the outside leading right up to the front porch. This he seated with chairs, and for a long time it was used for nothing else but a meeting place for the church." Grandpa and several of his sons served in the Civil war. Grandma managed the farm and wove and made nearly all the clothing used by her husband and sons, even to heavy overcoats and blankets. I know that Grandpa's home was always an inn for the traveler, a home for the orphan and the homeless, and the preacher's home. Papa writing about them says:

"The war ended, the cause gone, and two sons lost. Nine negroes freed, the evidence of amounts furnished the army reduced to mere waste paper, the twain addressed themselves again with their accustomed energy to the problems of social and domestic economy, helping to build the New south. There house, as in the past, was still an inn for the traveler and a place for Christian service." Grandma died Jan. 14, 1892 and Grandpa died the next day. They had been married 66 yrs. They were buried in the same tomb in the little cemetery not far from their home. 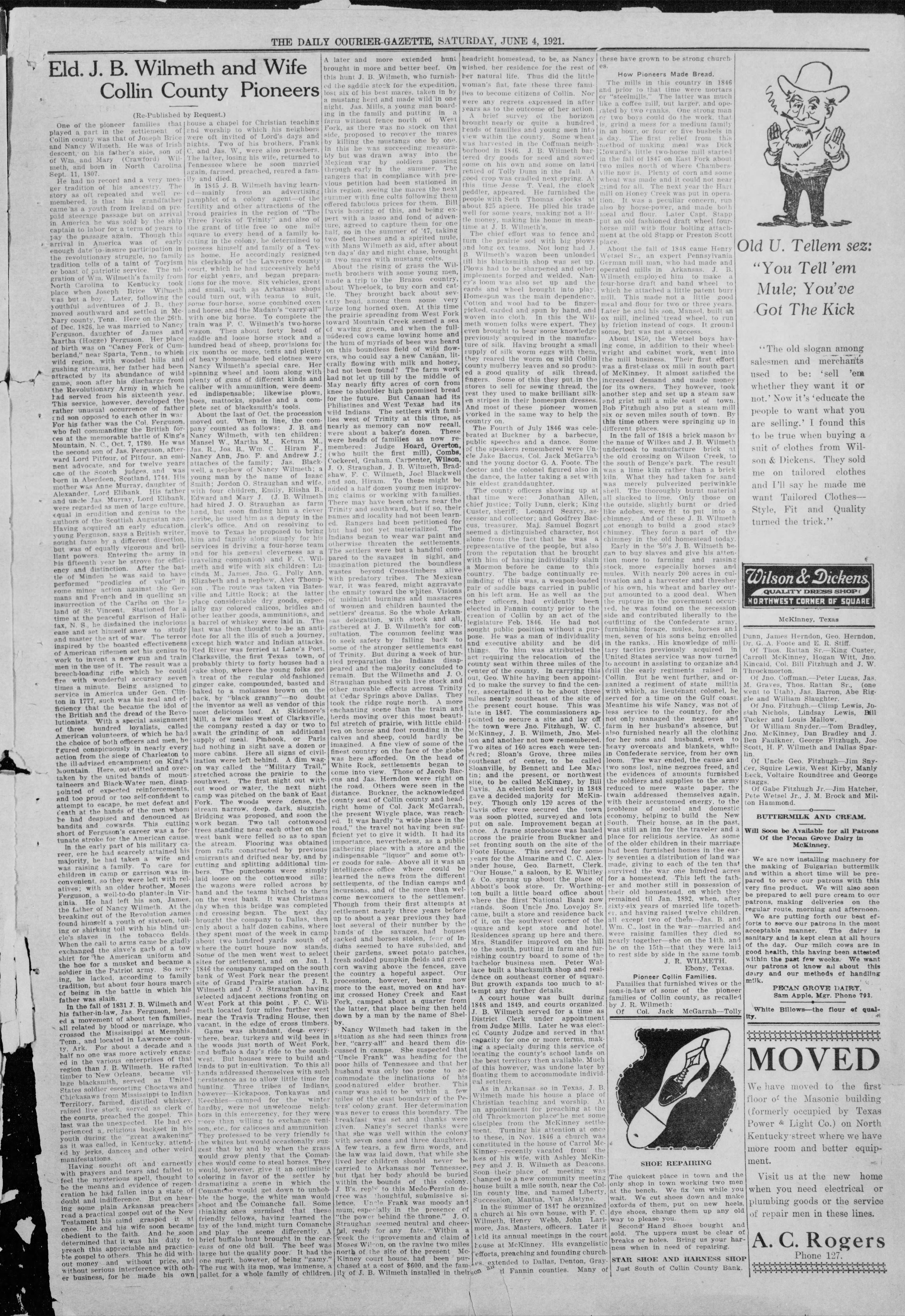 Location Of The Grave Of Joseph Brice Wilmeth

The grave of J. B. Wilmeth is located just north of McKinney, Texas, just off State Hwy. 75. Take Exit 42 Wilmeth Rd. and turn right. Go to the stop sign. Turn left on McLarry Rd. (Blockbuster's Home Office is on the opposite corner.) Continue down McLarry until it ends. The old cemetery is on the right. Turn right and go down the little road and pull into the graveyard on the right. Wilmeth has the tallest marker with an iron fence around it. GPS below is actual location in cemetery. 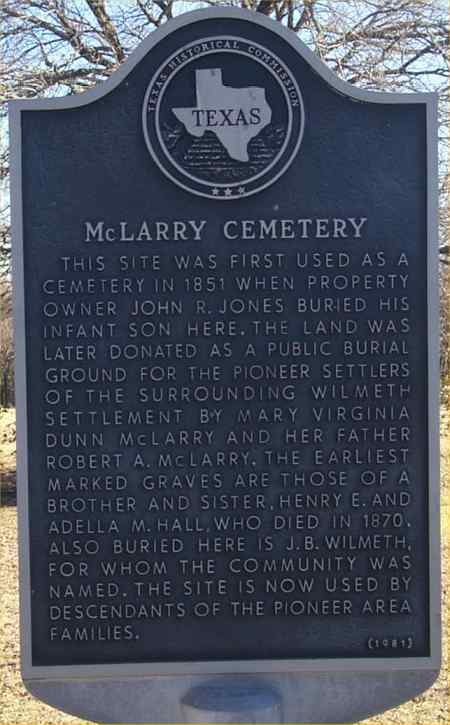 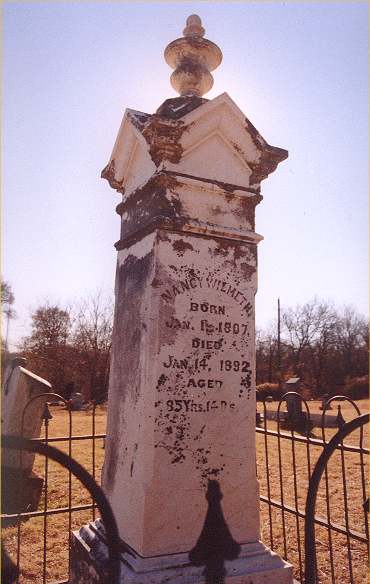 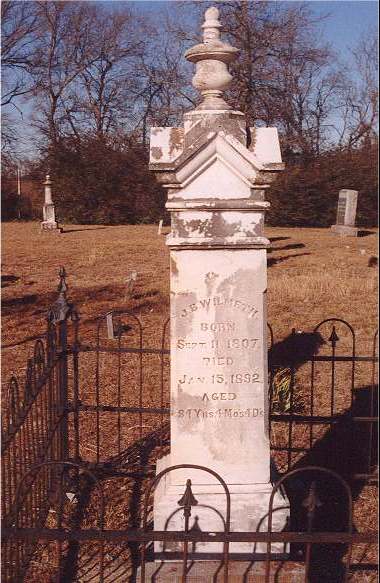