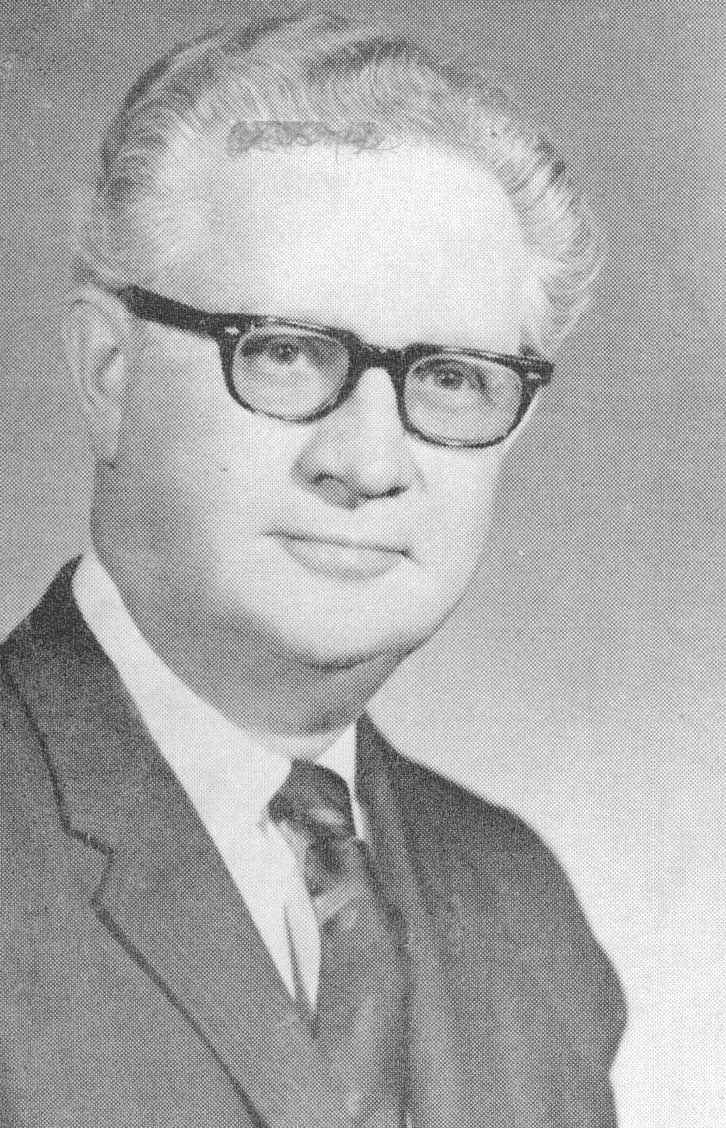 The Life Of R.C. Oliver

R.C. Oliver was born in Calloway County, Kentucky April 19, 1918. He was baptized at the age of fifteen by Jewell W. Norman in 1933. He married Virginia Jane Jones May 4, 1942, and together they give birth to two children, Robert Thomas and Pamela Ann.

R.C. began preaching in Detroit, Michigan in 1934. He attended Freed-Hardeman College (now University), in Henderson, Tennessee; Akron University in Akron, Ohio; Marietta College Marietta, Ohio; and East Tennessee State College where he earned the B.S. and M.A. degrees. He continued graduate work toward his Ph.D. at Wayne State University and the University of Mississippi.

He preached for various congregations of churches of Christ through his adult years including: the churches in River Rouge and in Flat Rock, Michigan from 1934-1941; the church in Grand Rapids, Michigan from 1941-1943; and the Bloomington, Indiana church from 1943-1945. While in school, he did appointment preaching and gospel meeting work for different churches. He preached at outlying churches while in school at Freed-Hardeman from 1946-1948, also at Clawson, Michigan from 1949-1952, at Thayer Street in Akron, Ohio from 1952-1953, at North End while in Parkersburg, West Virginia from 1953-1957, at Johnson City, Tennessee from 1958-1962; and then back at Clawson, Michigan from 1962-1965. He conducted meetings in many states as well as Canada. 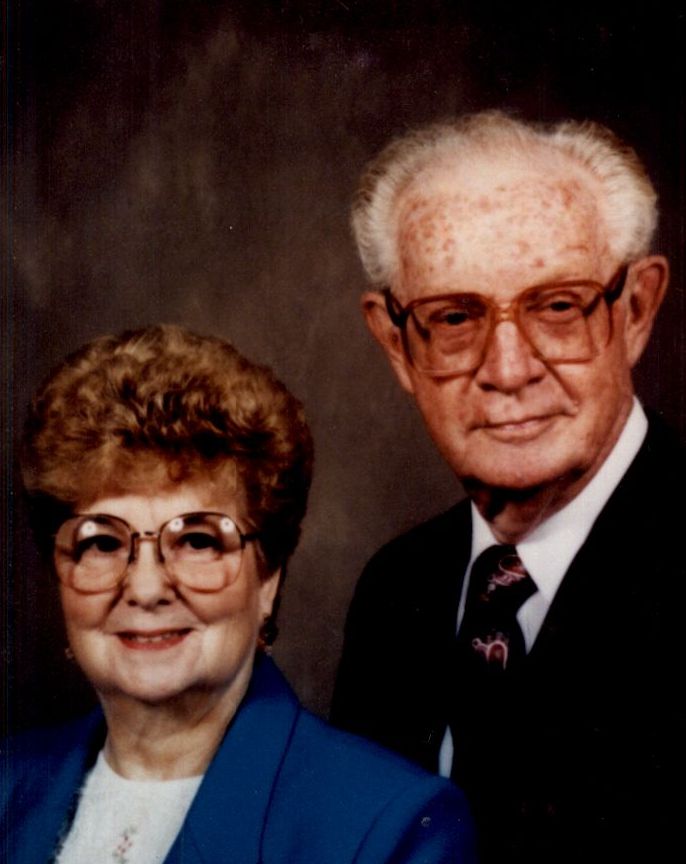 He joined the faculty of Freed-Hardeman College (now University) in 1965, and taught for a number of years in the Bible and English Departments. While in Henderson, he preached for the church in Bradford, the Pinson congregation, the Juno congregation in Lexington, and the Gooch congregation. For many years he was involved as an active member in Kappa Delta Pi, a national society in education.

While in Johnson City, Tennessee, he was heavily involved in radio and television work. He served as a teacher on the television series, "Your TV BibleCommentator" each Sunday afternoon over WJHL-TV.

He produced an unpublished thesis entitled: The King James Version of the Bible, A Reflection of an Age. He also wrote two booklets: "Radio Replies to a Critic" and "Seventeen Questions On Music In Christian Worship." For a time he edited and published a magazine called, Light, a sixteen-page monthly from 1955-1956. For years he wrote weekly articles for local newspapers.

He was involved in a number of public Bible discussions and debates with men of other faiths. Noteworthy was his debate with D. L. Welch of the Pentecostal faith. The debate was held while he was in Parkersburg, West Virginia. Attendance was in the thousands nightly, and there were several conversions following the debate.

It was the privilege of this writer to have known R.C. Oliver personally. When I was a student at Freed-Hardeman in the mid-1970s, R.C. Oliver taught my English Literature class. He was a delightful man, and a very good teacher. I recall many personal conversations with him. He was always a most encouraging and helpful person, giving good advice and admonition to excellence in education.

One thing of interest about him was his name. Nearly every year he would present a lesson in chapel on, "What's in a name?" His name was R.C. When signing for the Army draft board he was called upon to give his full name. He said his name was "R.C., that is R-only and C-only." He then said he got his draft card in the mail that listed his name as "Ronly Conly Oliver." Humorous, but true! Everyone who knew him, recalled "Brother Ronly Conly Oliver."

His last active years were spent in Parkersburg, West Virginia. He assisted in the Lord's Work there until he suffered a stroke. Later, he and his wife moved to Winter Haven, Florida where they lived near several of his wife's family until he was called home December 23, 1998. Virginia outlived him for several years. She passed July 8, 2005. Their bodies rest in the Mt. Olivet Cemetery in Parkersburg.

In May, 2012, two of his students, Scott Harp and Tom L. Childers visited his grave in Parkersburg, West Virginia. It was a beautiful day. We were heading home that day from a long trip through Tennessee, Kentucky, Indiana, and Ohio for the week. R.C. and Virginia's graves was the last we visited, and what a wonderful way it was to complete our trip. The setting in the cemetery is beautiful, with deer grazing around with hardly any fear of humans. Also, it afforded us both the pleasure of reminiscing about an old friend and teacher. Brother Oliver was a wonderful man of God.

R.C. Oliver Appeared On The Cover of The Minister's Monthly, January, 1971 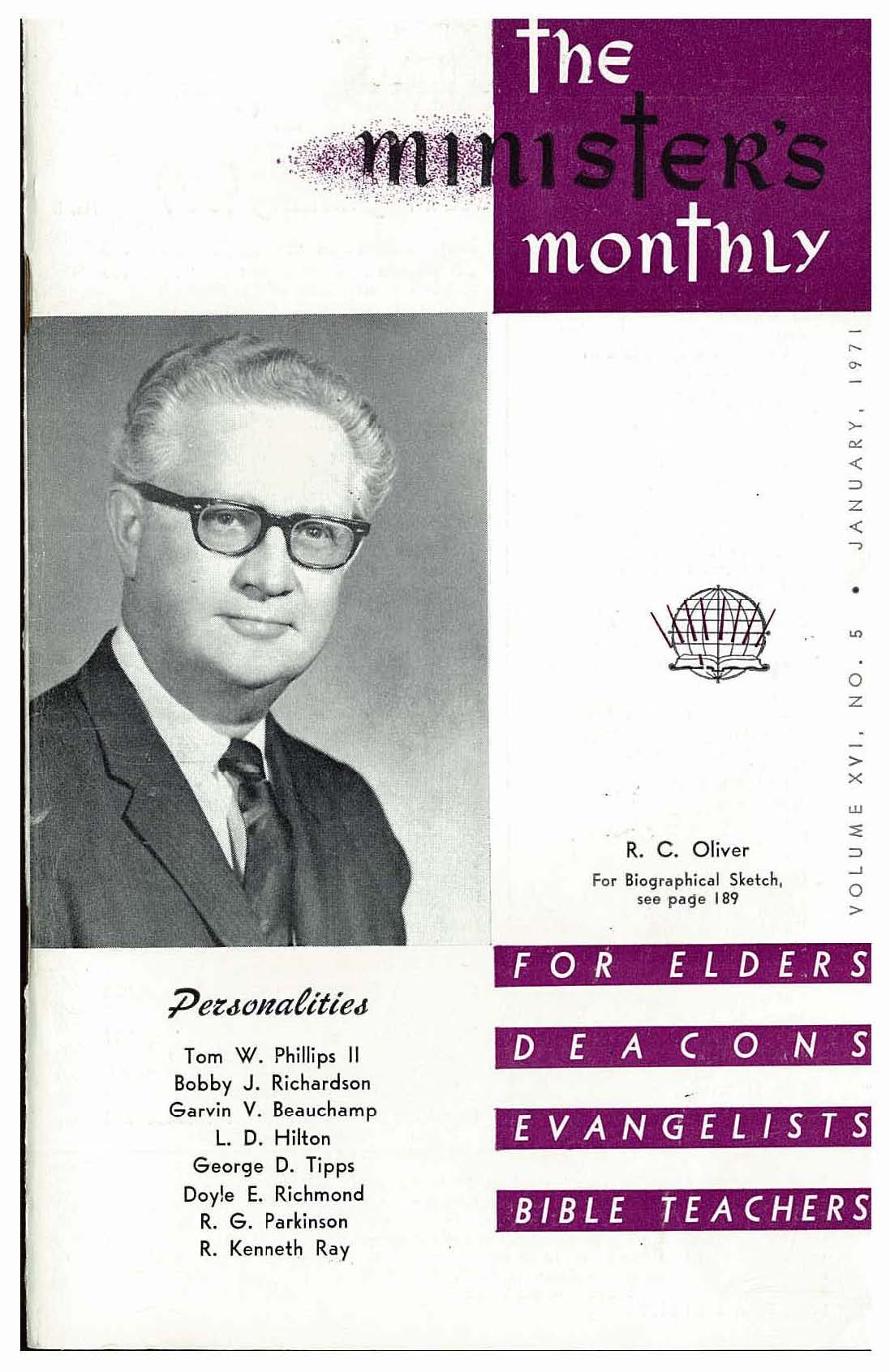 Directions To The Grave of R.C. Oliver

R.C. and Virgina Oliver are buried in the Mt. Olivet Cemetery in Parkersburg, West Virginia. Located in the northwestern region of West Virginia, you should take I-77 to Exit 178 and head toward Parksburg. Turn right on E. 7th St./Old U.S. 50/Hwy. 618. Turn right on Fairview Ave. Then turn left on 23rd Street. The cemetery will be on your right. The best way to get to the grave is to enter the cemetery and take your first right. It will go across the front of the cemetery and bear back to the left. Head up the hill and take the 3rd right. (If you get to the offices you have gone too far) Go down to the third left and head down the hill. Just as you come to the first turn, stop and look to your right. The Oliver plot will be about three rows in on a flat area. When I was there in May of last year there were deer walking around all over the place. Beautiful setting. Plot Info: Section i Lot III Plot #5. Virginia's body is laid in plot #4.

Click On Photo for Closeup
Grave is to the left of where Tom L. Childers is standing, about three rows in 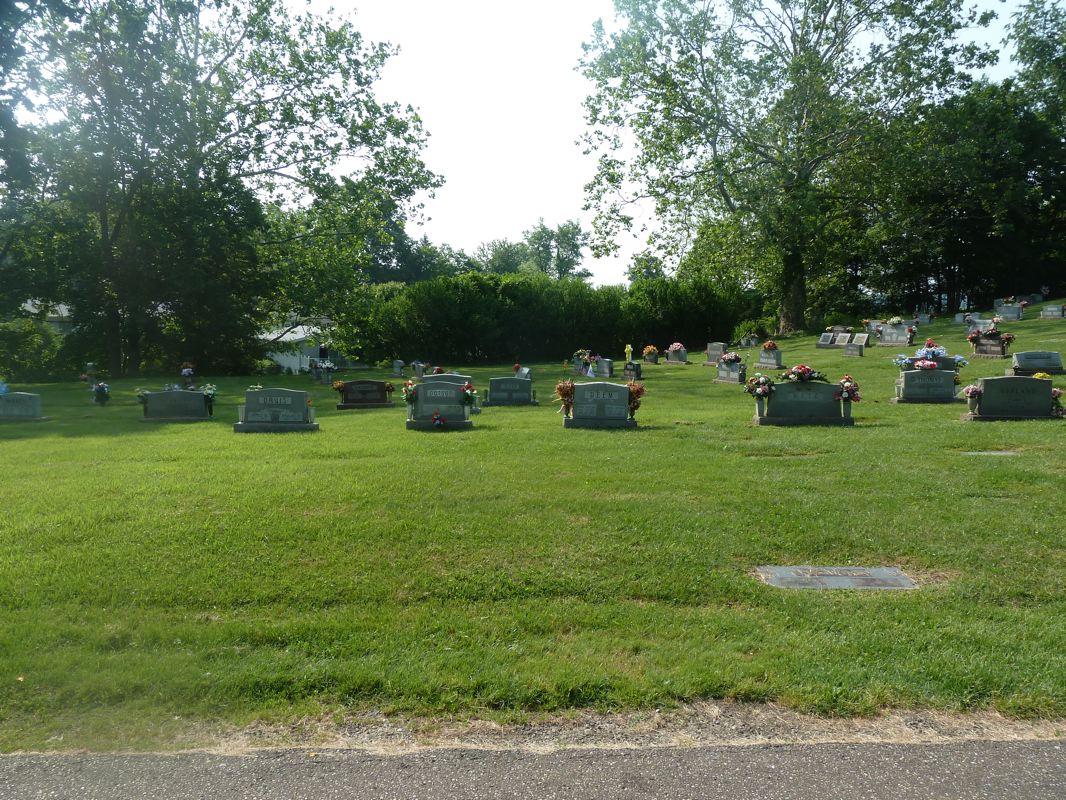 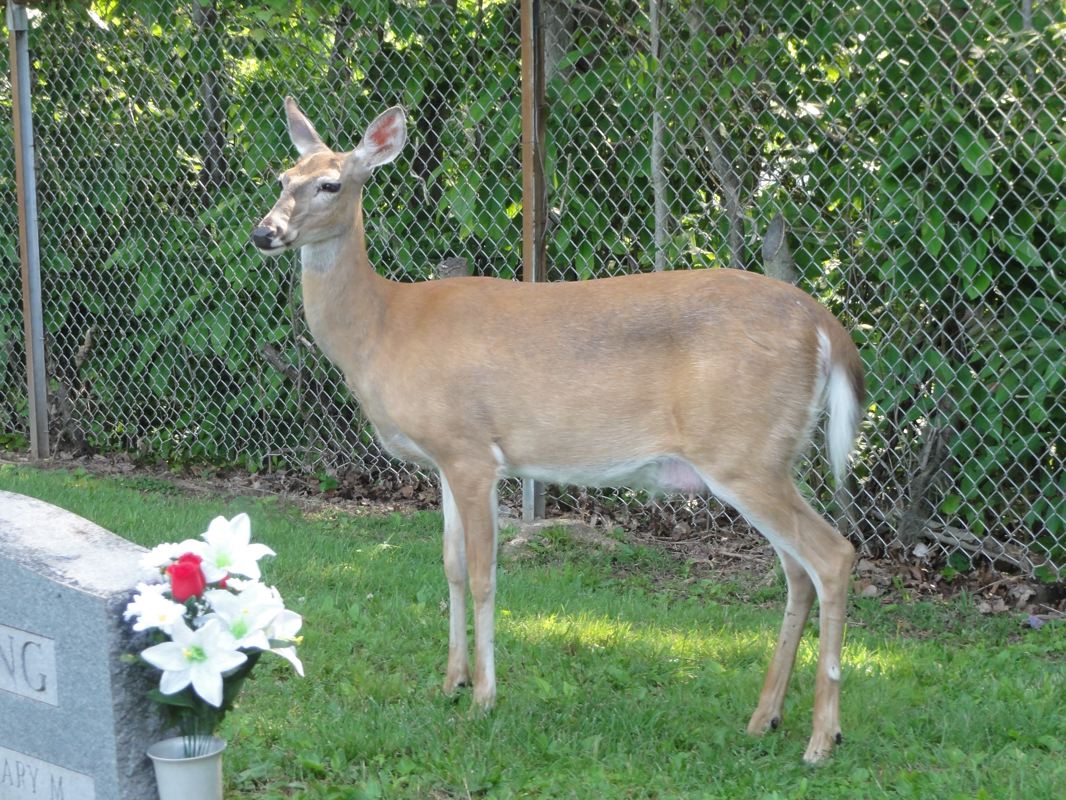 There are deer running all over the cemetery grounds 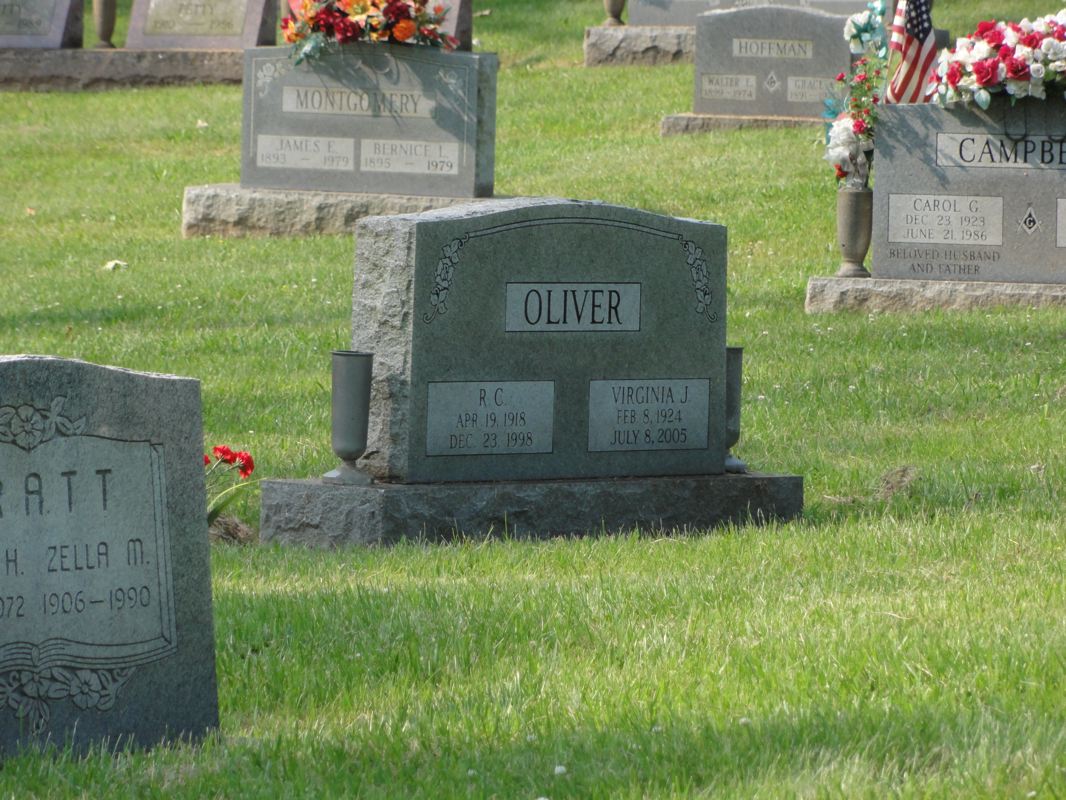 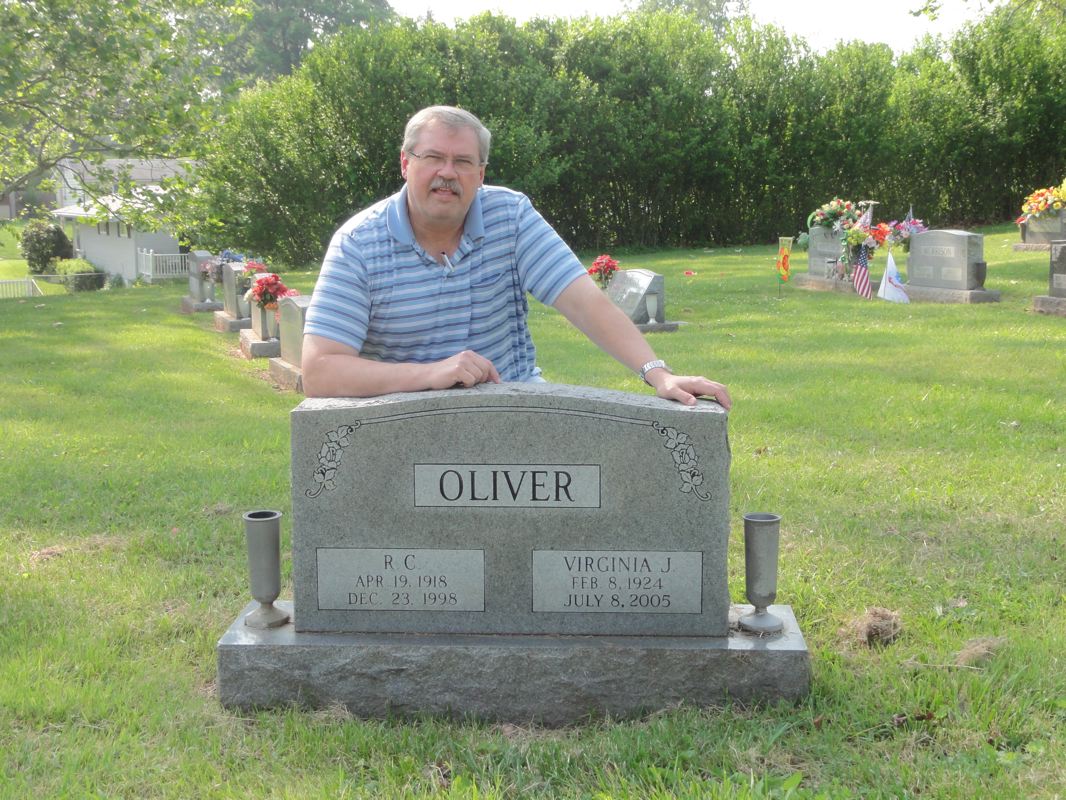 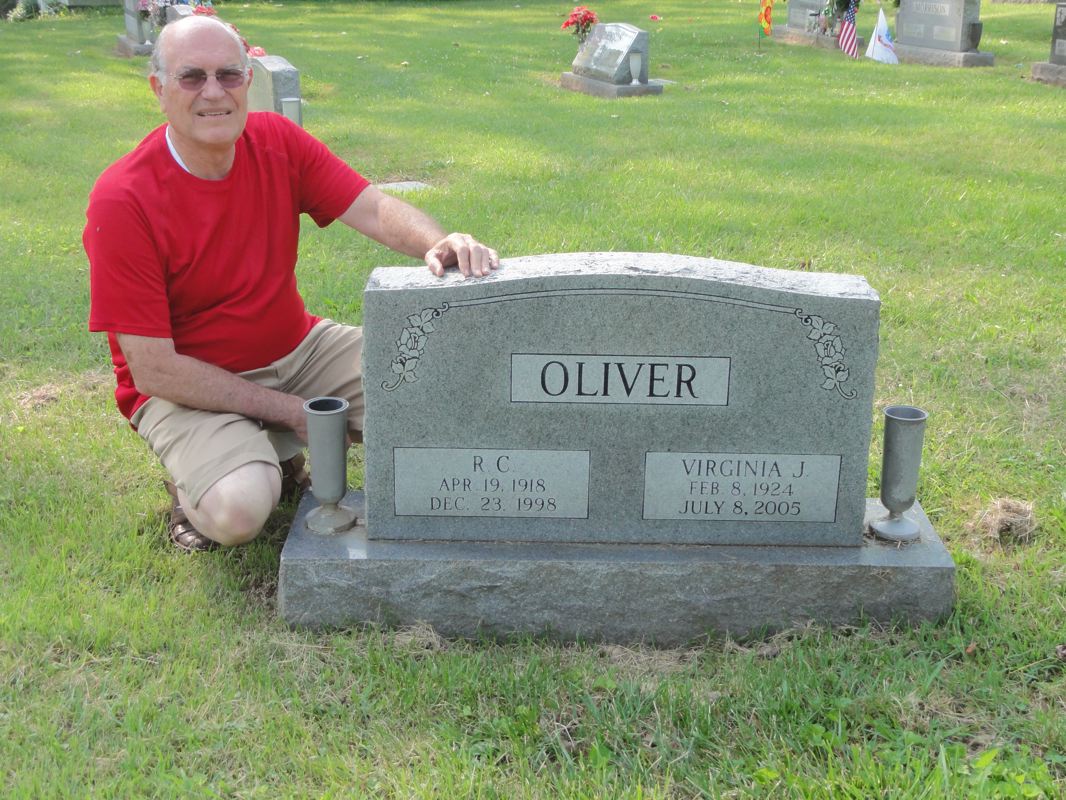 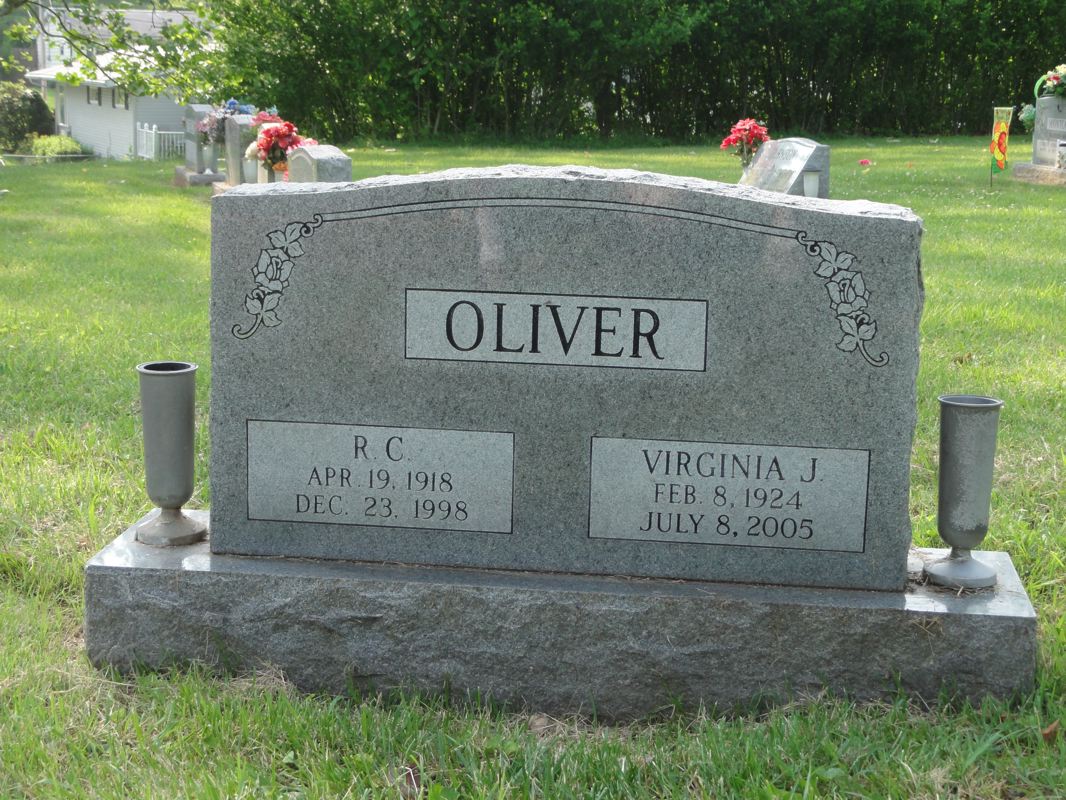 Special thanks to Tom L. Childers. When we visited the Oliver's graves, we were on the last day of a long-week's journey of about 3000 miles. We had traveled to a number of locations and burial sites of gospel preachers of yesteryear. We spent a couple of days with some students from East Tennessee School of Preaching on a tour of Bethany, West Virginia. We also met up with our old friend C. Wayne Kilpatrick with his students from Heritage Christian University. We were heading home that day - long journey back to Nashville, where we separated, and then I had to drive on to Atlanta. It was a great trip and a wonderful way to end it by stopping at the grave of our old teacher and friend, R.C. Oliver. Thanks to Tom for driving, and the most enjoyable time we had that week visiting and talking about the wonderful rich history of the Restoration Movement in America and around the world.