Chronology Of The Life Of Robert & James Haldane

A Brief Sketch on the life of Robert Haldane

Born 28th February 1764 in Queen Anne Street, Cavendish Square, London, he was the eldest brother of James Alexander Haldane. Like his brother he was brought up under the care of his grandmother, Lady Lundie, and his uncles, and the two boys attended the grammar school of Dundee and the high school of Edinburgh together.

After spending a very short time at Edinburgh University, early in 1780 he joined H.M.S. Monarch as midshipman under his uncle, Captain (afterwards Viscount) Duncan. Next year he was transferred to the Foudroyant, commanded by Captain Jervis, afterwards Earl St. Vincent, on board of which he saw some active service against the French. The peace of 1783 brought his naval career to a close.

Meanwhile he had come under the influence of David Bogue of Gosport. On leaving the navy he spent some time under Bogue's tuition, and then returned to Edinburgh University, where he remained for two sessions, following up his studies by making 'the grand tour' in the spring of 1785. In 1786 he settled down in his ancestral home of Airthrey, where for ten years he led a country life. The outbreak of the French revolution led him to take a keen interest in politics, but his mind became more and more engrossed with religion. In 1796 he formed a project for founding a mission in India, he himself to be one of the missionaries, and to supply all the necessary funds. He proposed to sell his estates, and to invest £25,000 for the permanent support of the work. His friend Bogue agreed to accompany him to India, and a body of catechists and teachers and a printing-press were to be taken out. But the East India Company refused to permit the mission to be planted on any part of its territory, and the scheme was abandoned.

He then turned his attention to the needs of Scotland. In 1798 he sold Airthrey, and began occasionally to preach. Leaving the Church of Scotland in January 1799, and joining his brother in organising a congregational church in Edinburgh, he set about establishing tabernacles in the large centres of population, after the plan of Whitefield, he himself supplying the necessary funds. To provide pastors he founded seminaries for the training of students, whom he maintained at his own expense. It is said that in the twelve years 1798-1810 he had expended over £70,000 on his schemes for the advancement of religion in Scotland.

About 1798 he entered into a plan for bringing twenty-four children from Africa to be educated and sent back again to teach their fellow countrymen, and promised to bear the entire cost of their transport, support, and education, estimated at £7,000. The children were brought over, but for some reason or other were not placed under Haldane's care, though he had arranged for their accommodation in Edinburgh. He was suspected by many for his supposed democratic tendencies, as well as his religious views. To vindicate himself he published in 1800 a pamphlet entitled 'Addresses to the Public by Robert Haldane concerning his Political Opinions and Plans lately adopted to promote Religion in Scotland'. In 1808 his adoption of baptist views and other circumstances created widespread discussion in the congregational body. Among others a bitter controversy sprang up between Haldane and the Rev. Greville Ewing in 1810.

In 1816 he published one of his more important works, 'The Evidence and Authority of Divine Revelation'. In the same year which saw the first appearance of this book he went to Geneva and began a remarkable work of continental evangelisation. A large number of the students of the university came to him daily for instruction, and he gained over them a wonderful influence. In 1817 he removed to Montauban, where he followed a similar course. Here he also procured the printing of two editions of the Bible in French, amounting to sixteen thousand copies in all, which he circulated along with a French translation of his 'Evidences' and a commentary on the Epistle to the Romans in the same language, and many tracts.

In 1819 he returned to Scotland to an estate at Auchingray, Lanarkshire, which he had purchased. In the end of 1824 he became involved in a controversy, which raged for twelve years, regarding the circulation by the British and Foreign Bible Society of the Apocrypha along with the Bible. His first 'Review of the Conduct of the British and Foreign Bible Society relative to the Apocrypha and to their administration on the Continent, with an Answer to the Rev. Charles Simeon, and Observations on the Cambridge Remarks,' appeared in 1824. A second 'Review' followed the first. The course of this controversy led him to issue one of his best known works, 'The Authenticity and Inspiration of the Scriptures," which at once reached a large circulation, and has passed through many editions.

In 1835 appeared the first volume of another work, which was also destined to attain great popularity, an 'Exposition of the Epistle to the Romans,' the beginnings of which had already appeared in French. The second volume was published in 1837, and the third in 1839. In addition to the works mentioned he was the author of many tracts and other fugitive publications.

He died in Edinburgh on 12th December 1842, and was buried in Glasgow Cathedral. He married in April 1786 Katherine Cochrane, daughter of George Oswald of Scotstown.

[Adapted from Thomas Hamilton's article in The dictionary of national biography: from the earliest times to 1900, 1917]

Directions To The Grave of Robert Haldane

Glasgow Cathedral is located in the old part of the city, and can be a little difficult to get to. However, it is possible. Parking is usually an issue. So keep it in mind if you drive.

Take Exit 15 off the M8 and head south. The grounds of the Glasgow Cathedral will be on the left. Enter the side door (main entrance) of the cathedral, and go to the middle of the church building, then head toward the main worship area. Just before you come to a set of stairs going into the sanctuary, you will see a seat on the right and a pulpit on the left. In the floor is the George Oswald, Esq. of Scotstown, family plot. Oswald's daughter was Katherine Cochrane Oswald Haldane, the wife of Robert Haldane. Robert and Katherine were married on the 28th of February, 1785. When Robert Haldane died the 11th of December 1842, he was buried the next day in the family plot. Within six month, his wife Katherine followed, the 19th of June, 1843, and was buried next to him. It is believed that the Haldanes are buried in plots 3 and 4. 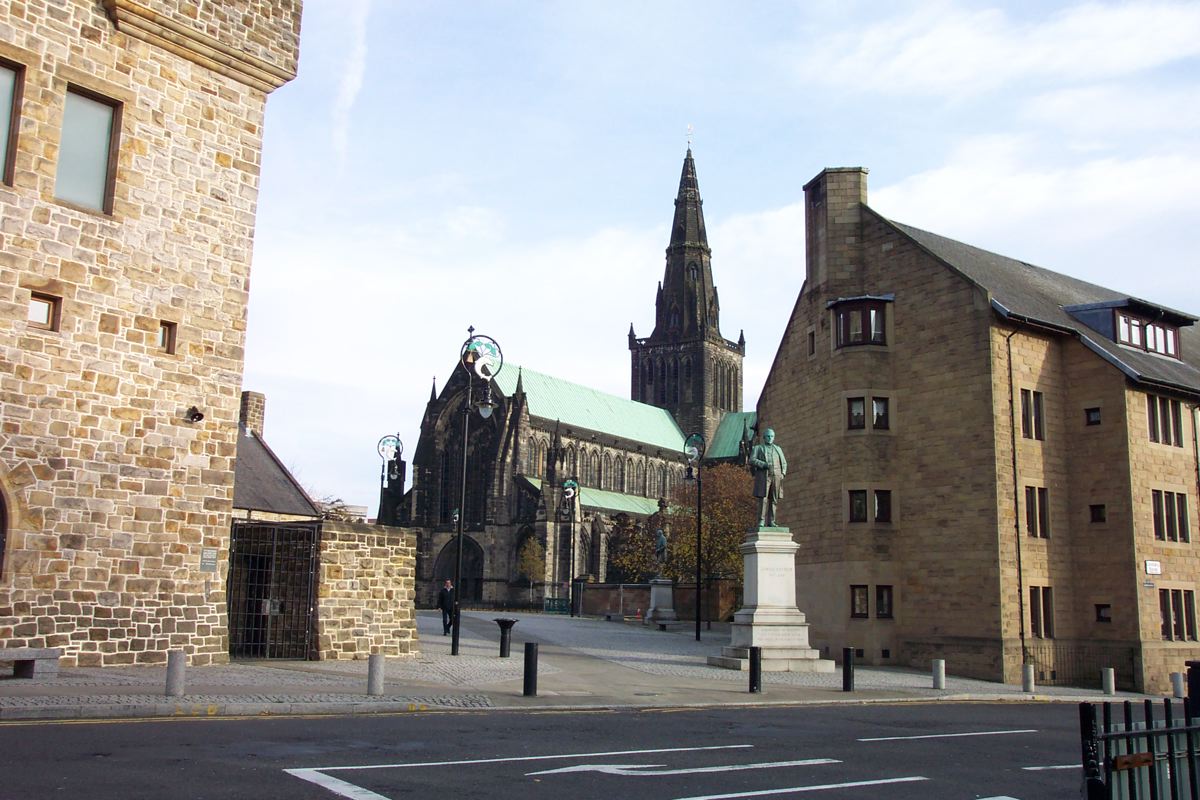 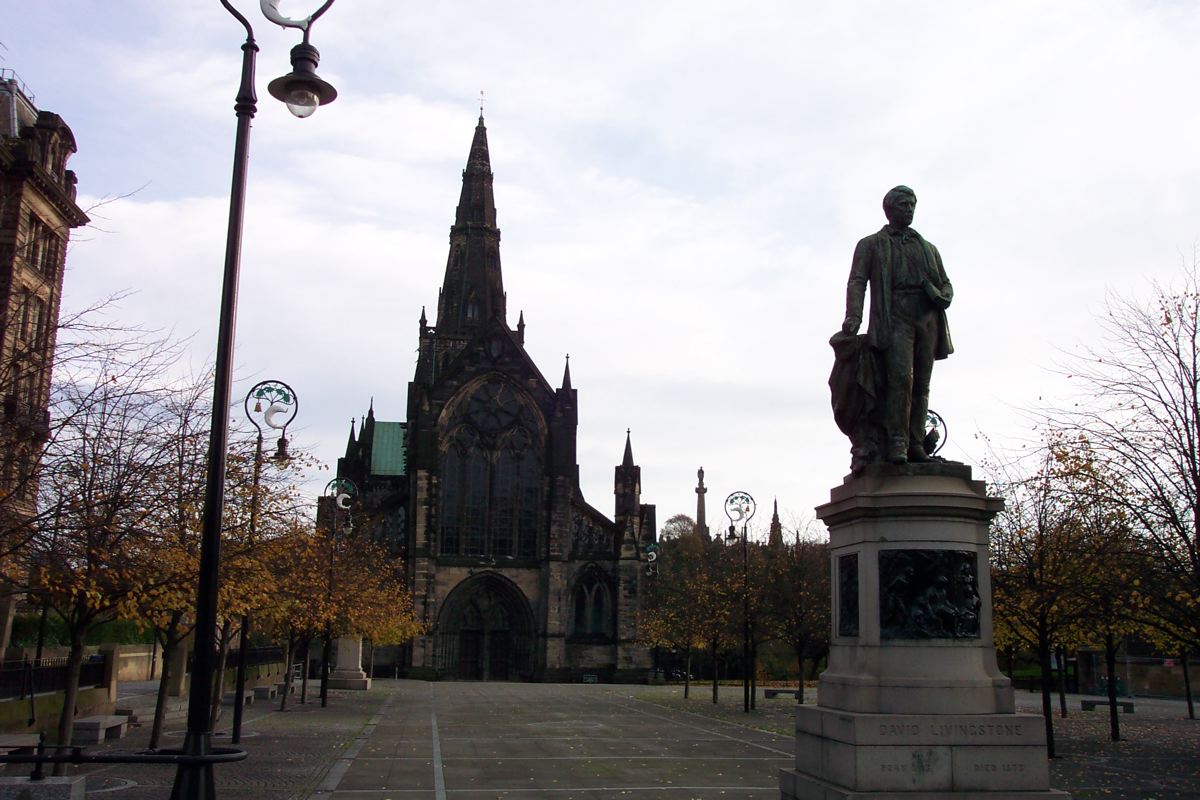 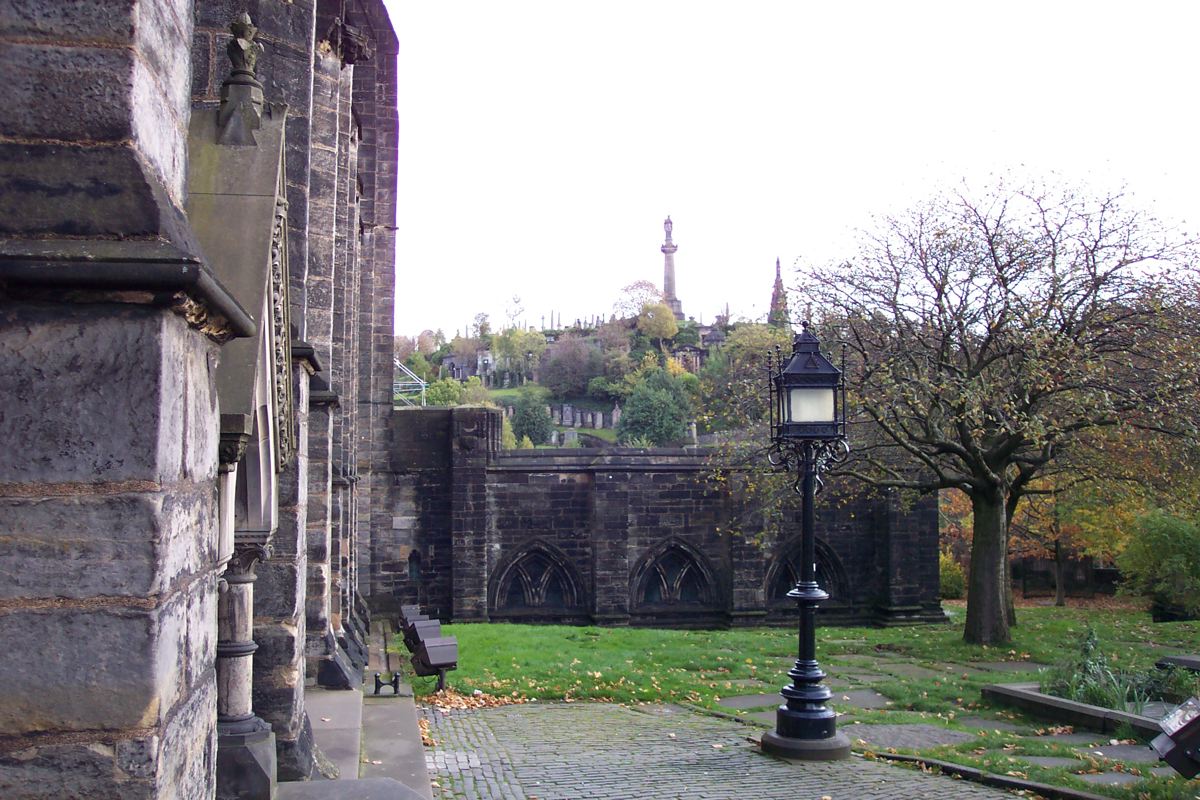 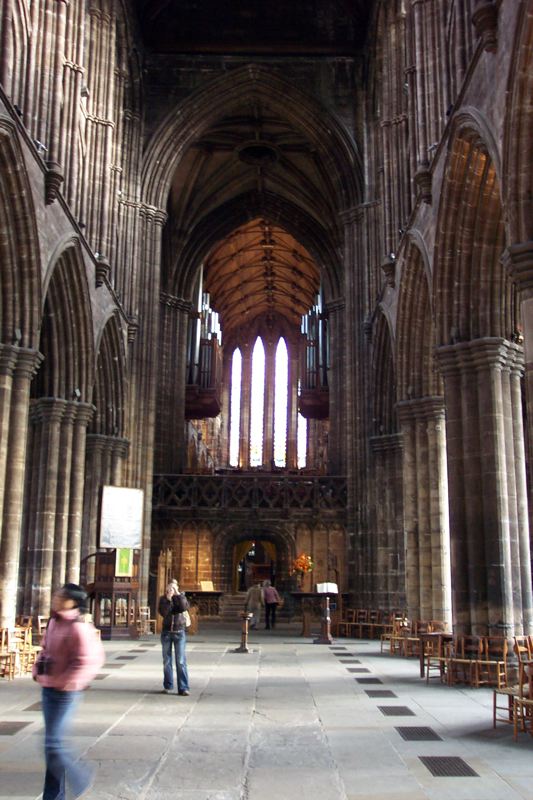 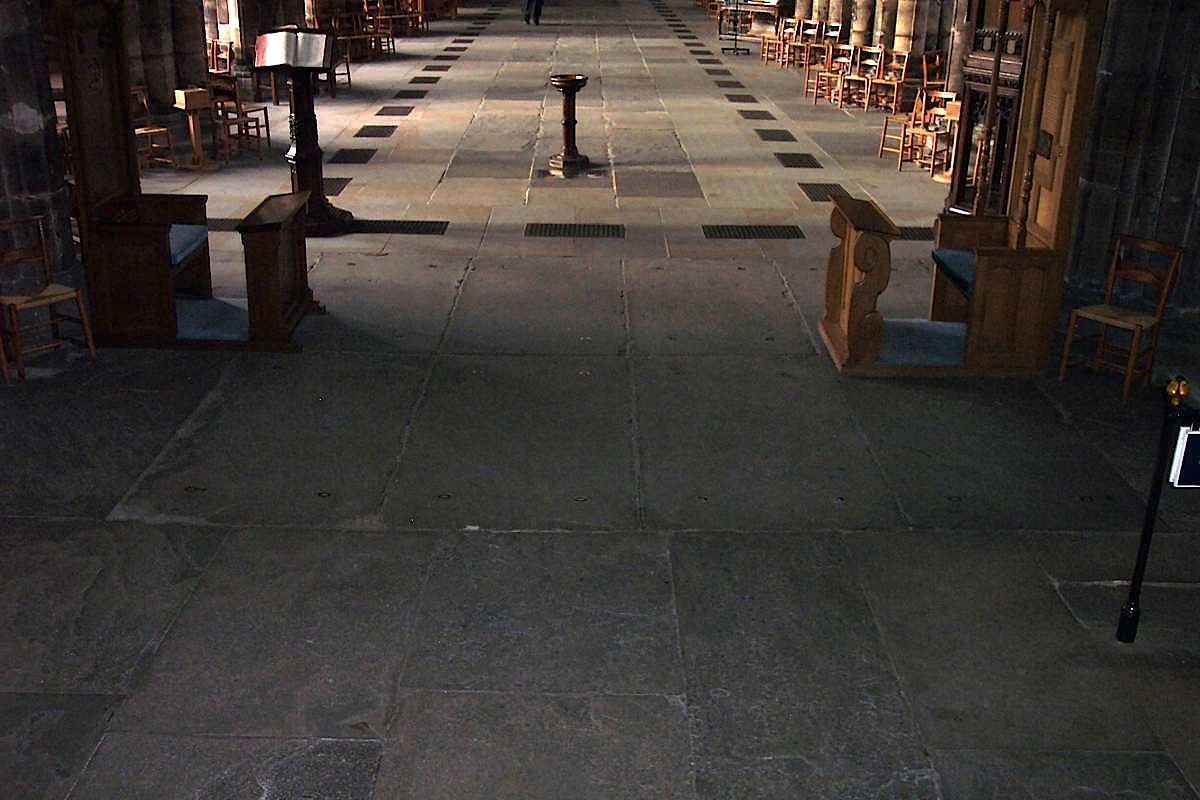 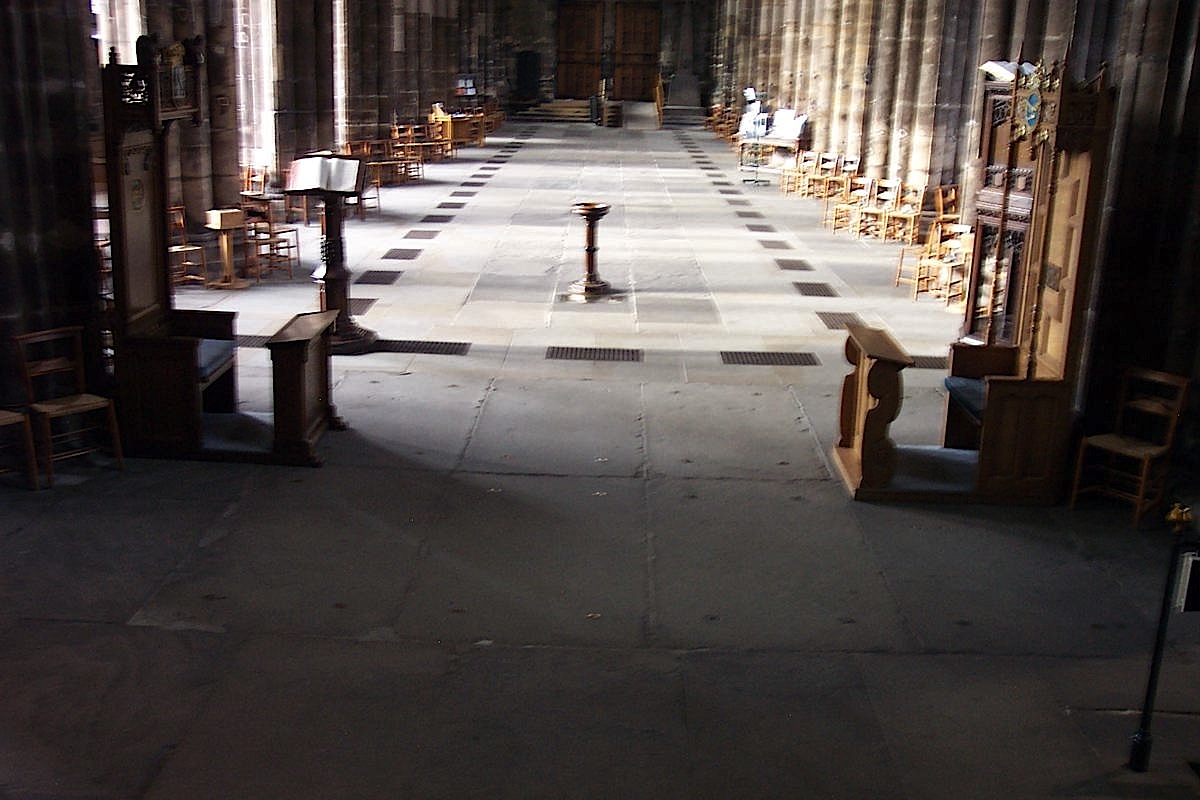 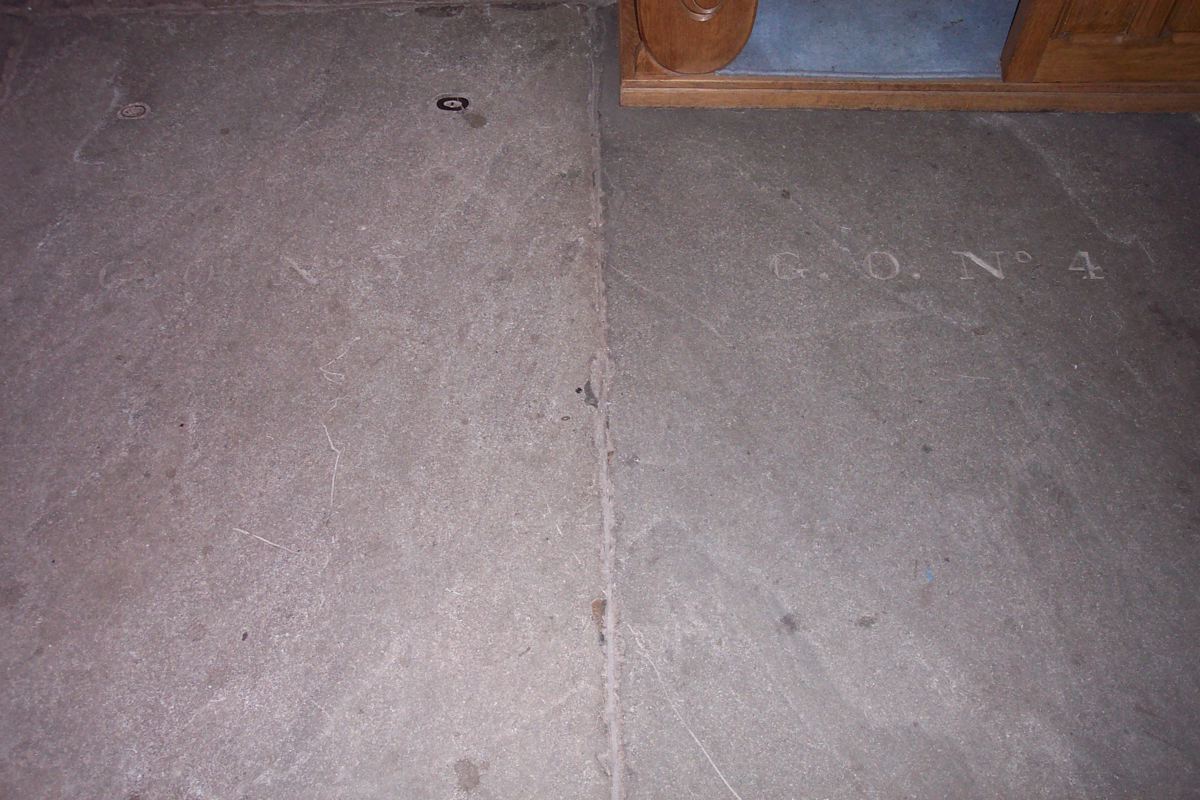 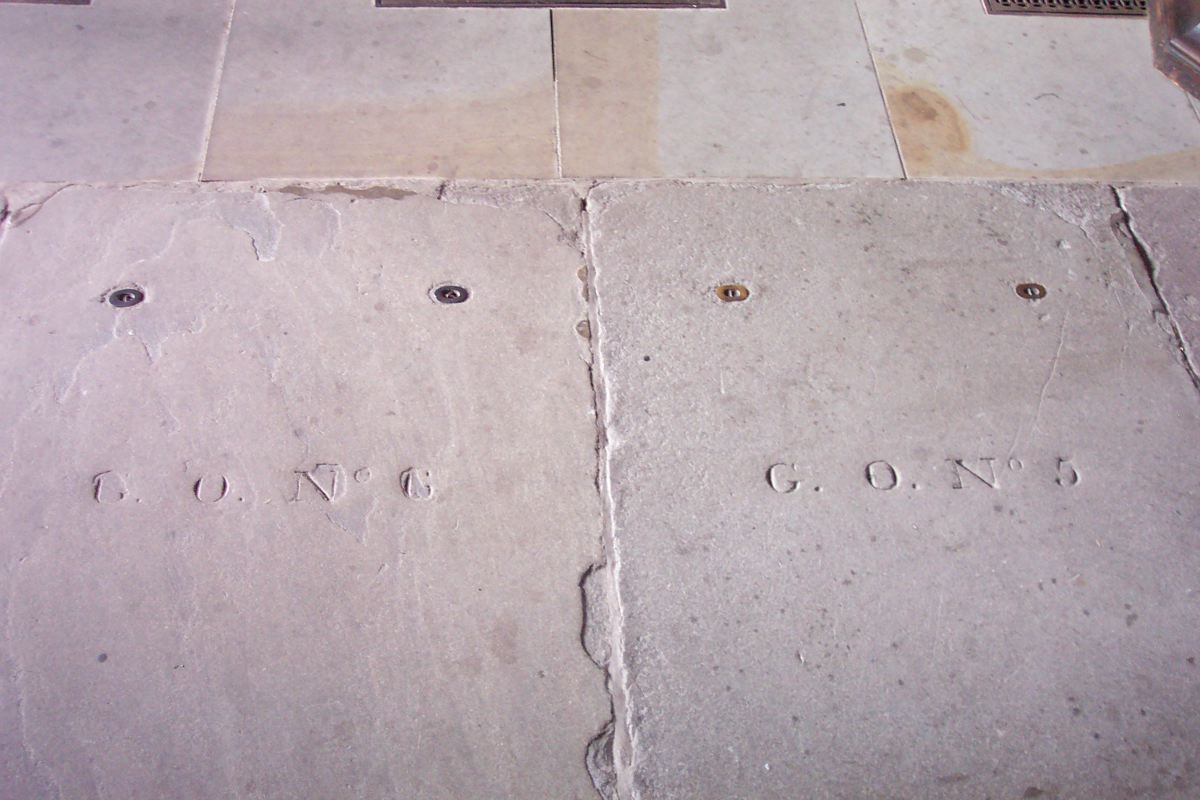 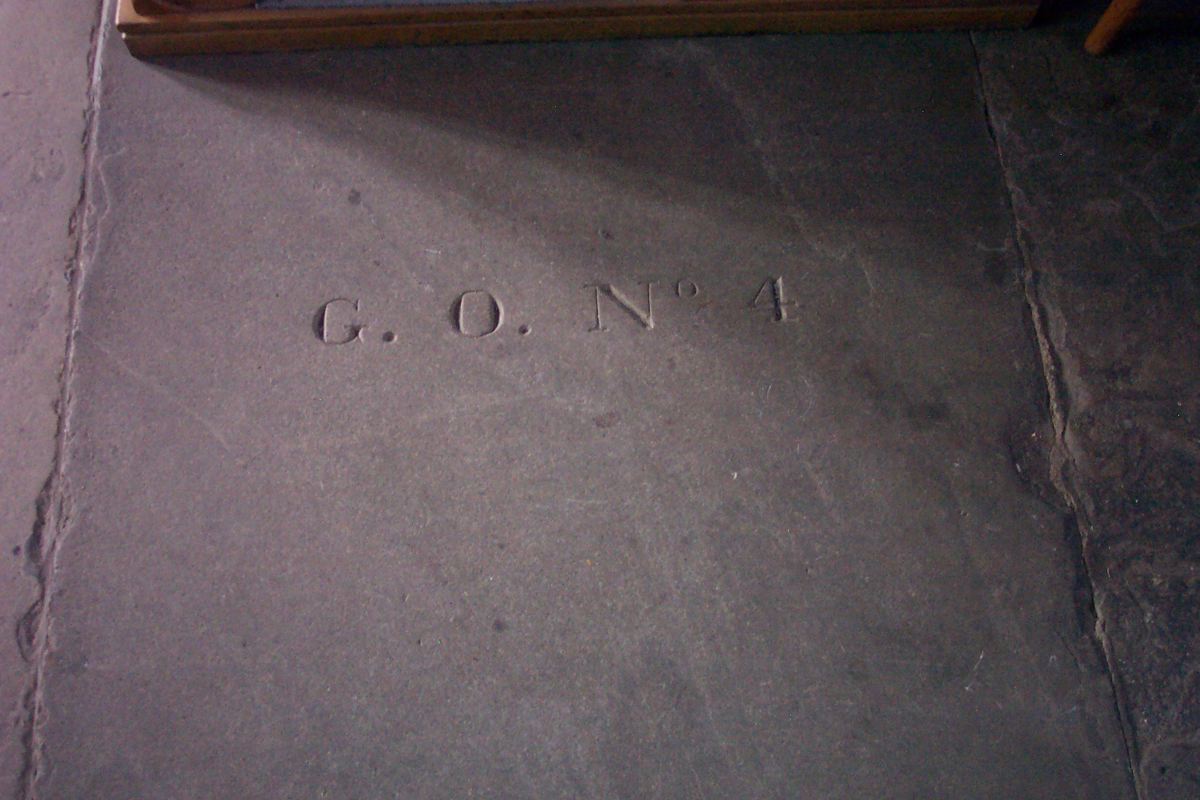 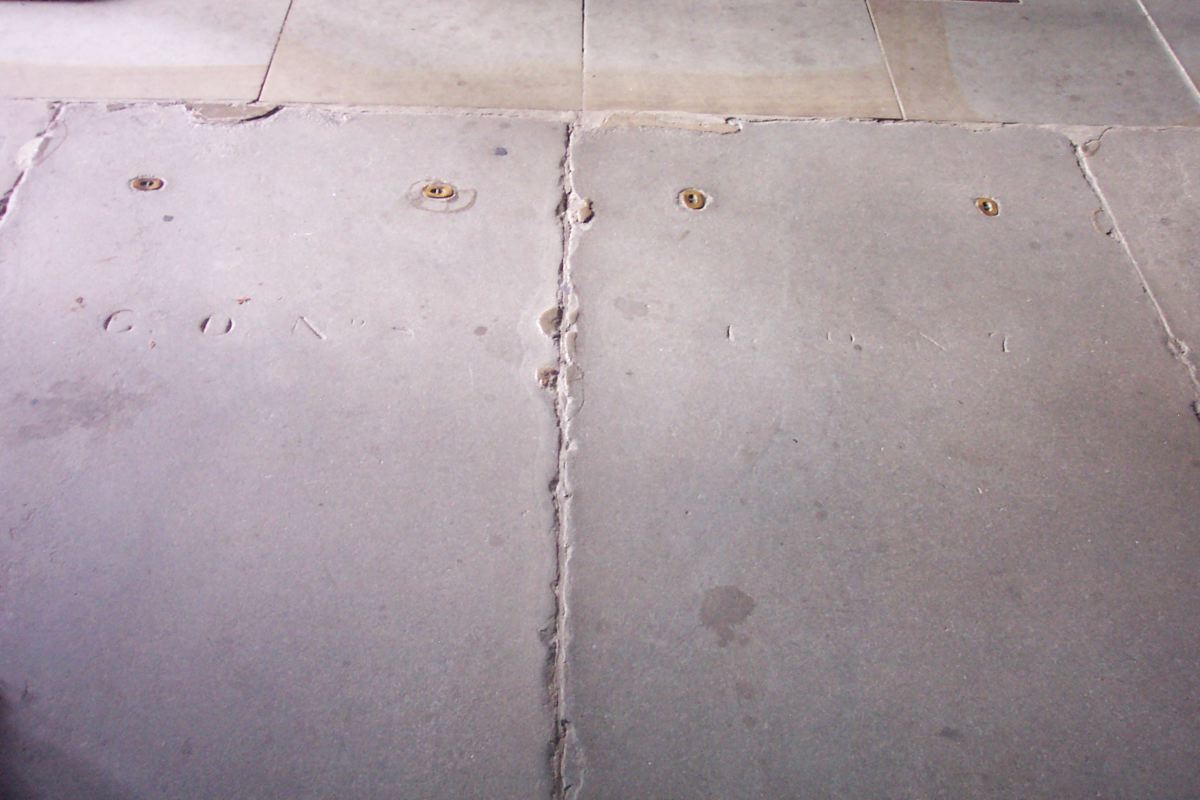 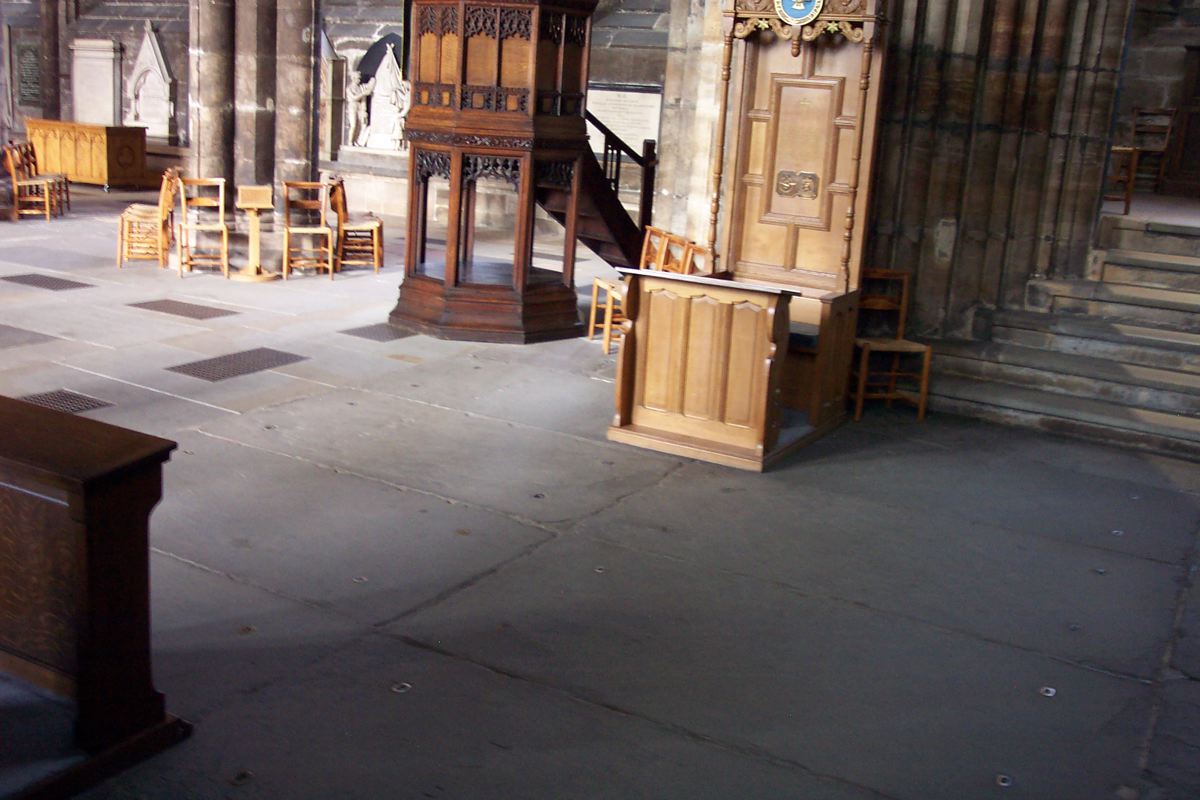 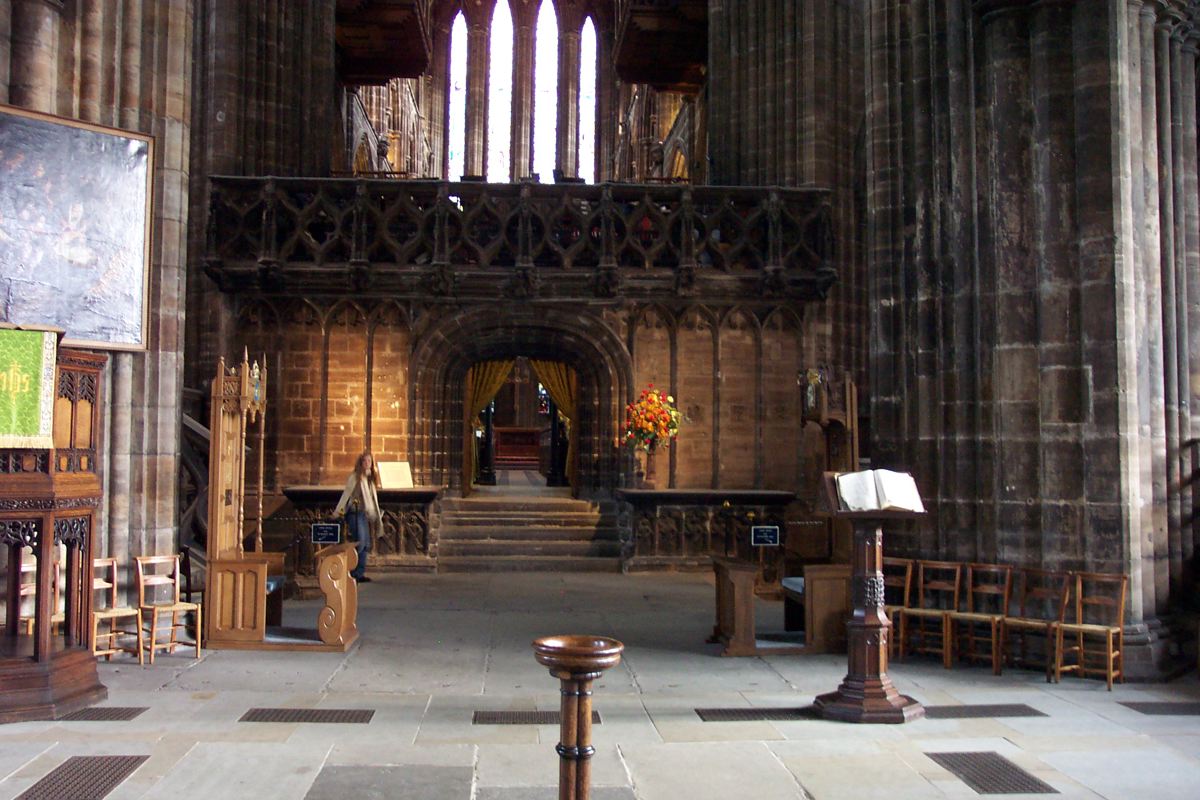 Section lady on left is about to walk across is the Oswald Plot where the Robert Haldanes are buried. 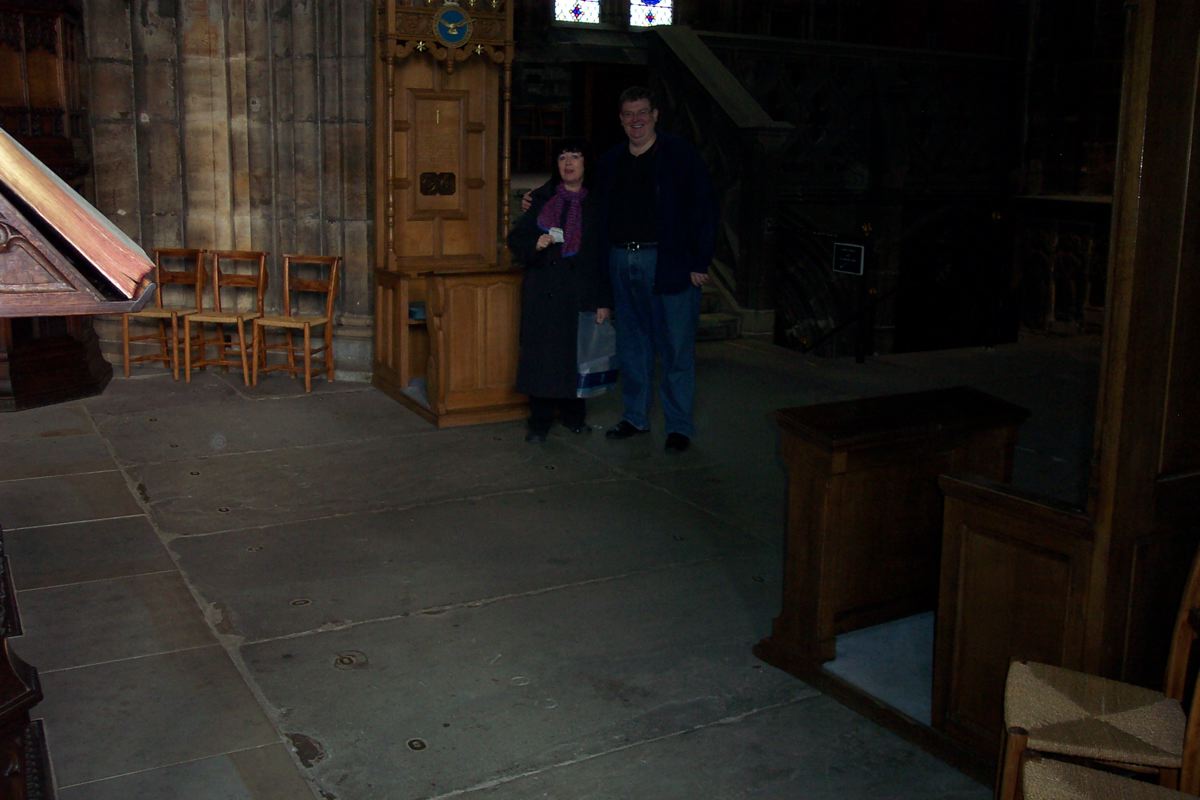 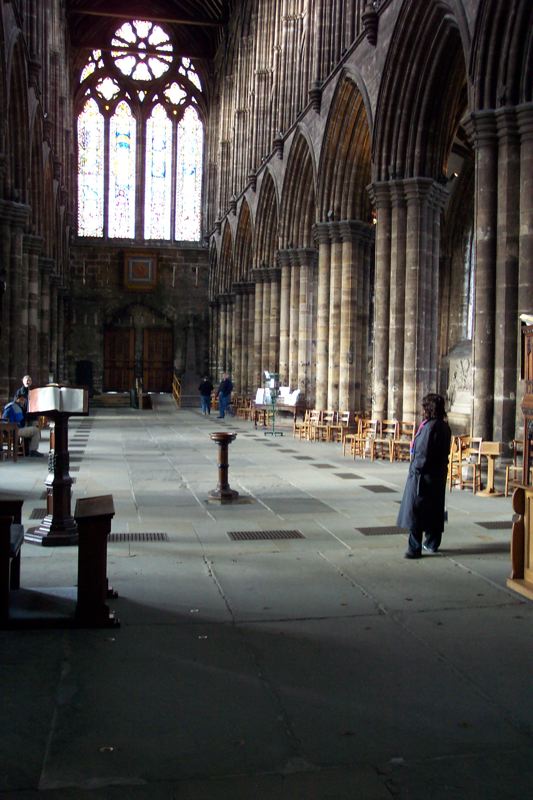 Special Thanks to Graham McDonald of Cumbernauld, Scotland. He hosted your webhost, and wife Jenny in November, 2006. He kindly showed us many special locations where the Reformation in Scotland took place. The Glasgow Cathedral is but one place where much work was done.