Some who are entered into this website were not a part of the Restoration Movement. Perhaps they were connected as a result of interaction with those in the Christian movement. Tilford Boling was a preacher among the denominations who debated C.R. Nichol. Nichol's report on the debate written in the Gospel Advocate is entered below. While visiting in Salem, Indiana, it was a privilege to visit the grave of Ben F. Taylor, a preacher among churches of Christ who lived to the age of 109. A visit to this cemetery took place in May, 2012, but it was after returning home that it was found that another preacher connected with the Christian movement is also buried there, Commodore Cauble. Perhaps someday a return trip will be possible. Thus, this site is to highlight the interaction of Tilford Boling's connection to the Restoration Movement.

Some two years following the debate with the Adventists there came to the community a man from Indiana, Mr. Tilford Boling, preaching a new doctrine to the people, and created a deal of interest. He denominated himself a "Stumblingstoner." He was chesty, cocksure, and issued challenges from the platform and in private, insisting that he wanted a debate which would continue for at least ten days. He made a number of disciples from those who were not conversant with the teaching of God's word. The "Stumblingstoners" were—I think they have ceased to exist—a "non-ordinance" people. With them there was no authority for baptism in water, or with water, following the death of Christ. Baptism in water, they insisted, was an "ordinance" of "the law," and practiced during the days of John the Baptist, and was never intended for a Gentile; that though some Gentiles were baptized after the day of Pentecost, it was due to the fact that the aposties did not know "the law of Moses" had been abrogated.

From this it must follow that the baptism they had received—when they "were baptized into Christ"—was not Holy-Spirit baptism, but was baptism in water. And more, since salvation is in Christ—"that they also may obtain the salvation which is in Christ Jesus" (2 Tim. 2: 10)—it must follow that the baptism which the Christians had received, which put them "in Christ," was not baptism in the Holy Spirit. The "Stumblingstoners" did not have a church organization. With them there was no such thing as the "Lord's Supper" observed. Mr. Bolin became so insistent that some one meet him in debate that eventually the brethren at "Christian Chapel" (the first congregation established in the community) wrote asking that I come and meet the man. Though he insisted that the debate should last ten days, the morning for the second day of the discussion found him gone from the community. I preached a few days and baptized some twenty.

Two years later the "Stumblingstoners" brought to the community a Mr. George Cramer, and he, like Mr. Bolin, was to the fore with challenges-defying the hosts of Israel. Again brethren wrote asking that I come to debate with Mr. Cramer. I found Mr. Cramer a stronger man than Mr. Bolin, but the doctrine he preached was so palpably untrue that the debate closed the public preaching of that sect in this community, and today they do not exist in this community, and, so far as I know, at no place on earth--or elsewhere!

-C.R. Nichol, Debates, Gospel Advocate, 9.28.1933, p.919 - The above is an excerpt from an article written by C.R. Nichol under the column, "Dogmas of Denominations." Other information is shared in the article not connected with Tilford Boling.

Directions To The Grave of Tilford Boling

From Louisville, Kentucky: Head north on I-65, cross into Indiana, and go to Exit 7/Hwy. 60 and turn left. Head NW toward Salem. Go 33.5 miles to Salem. In Salem, follow Hwy. 60 all the way to Main St. and head toward the middle of town. At the square, you will want to turn left on W. Market Street. Go about 5 blocks and turn left on Shelby Street. At the end of Shelby Street you will enter the cemetery. Head straight ahead into the cemetery. You will be on Division Street. Go down the drive until you come to the cemetery's work shed, and turn right on Central Ave. Go one section and turn left on Meridian. Pass through two turns on your right (the last being Brown Dr.) After Brown Dr. go about 250 feet and look to your left, about three rows to the grave of Tilford Boling.

From Indianapolis: Take I-65 south to Scottsburg. Take Exit 29B and turn right on Hwy. 56. Heading to Salem, go exactly 18.6 miles from the exit and turn left on N. Shelby Street. At the end of Shelby Street you will enter the cemetery. Head straight ahead into the cemetery. You will be on Division Street. Go down the drive until you come to the cemetery's work shed, and turn right on Central Ave. Go one section and turn left on Meridian. Pass through two turns on your right (the last being Brown Dr.) After Brown Dr. go about 250 feet and look to your left, about three rows to the grave of Tilford Boling. 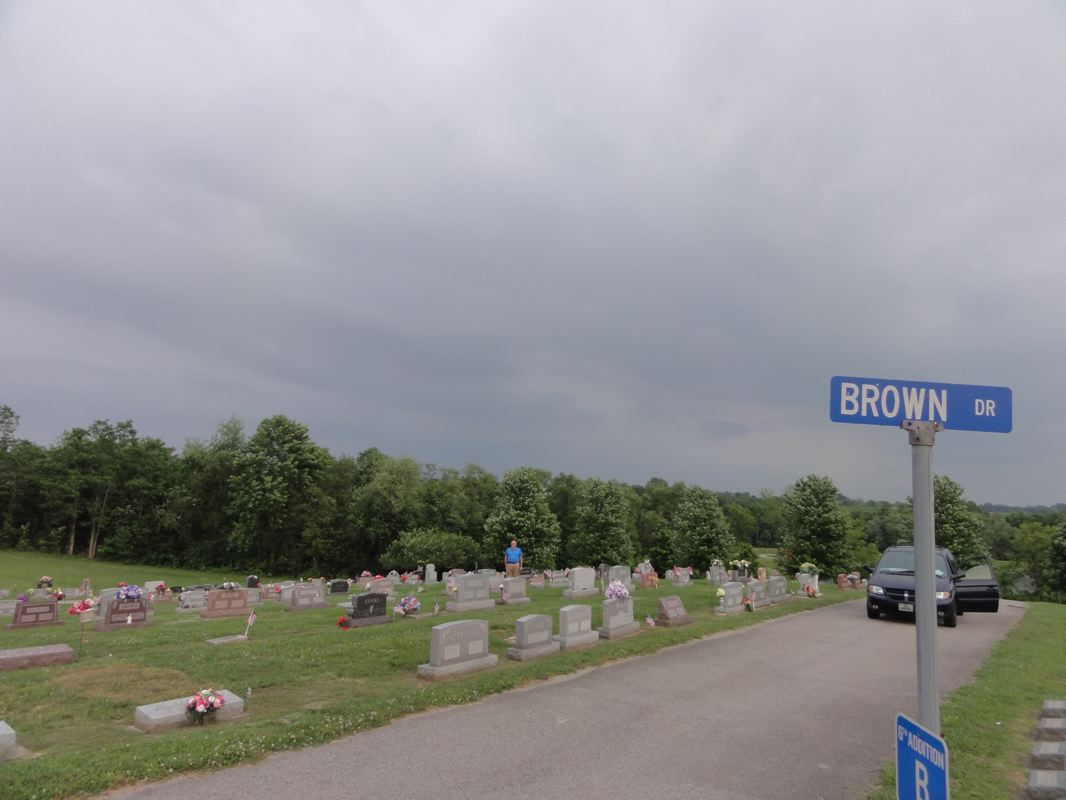 Tom L. Childers standing at the grave of Tilford Boling 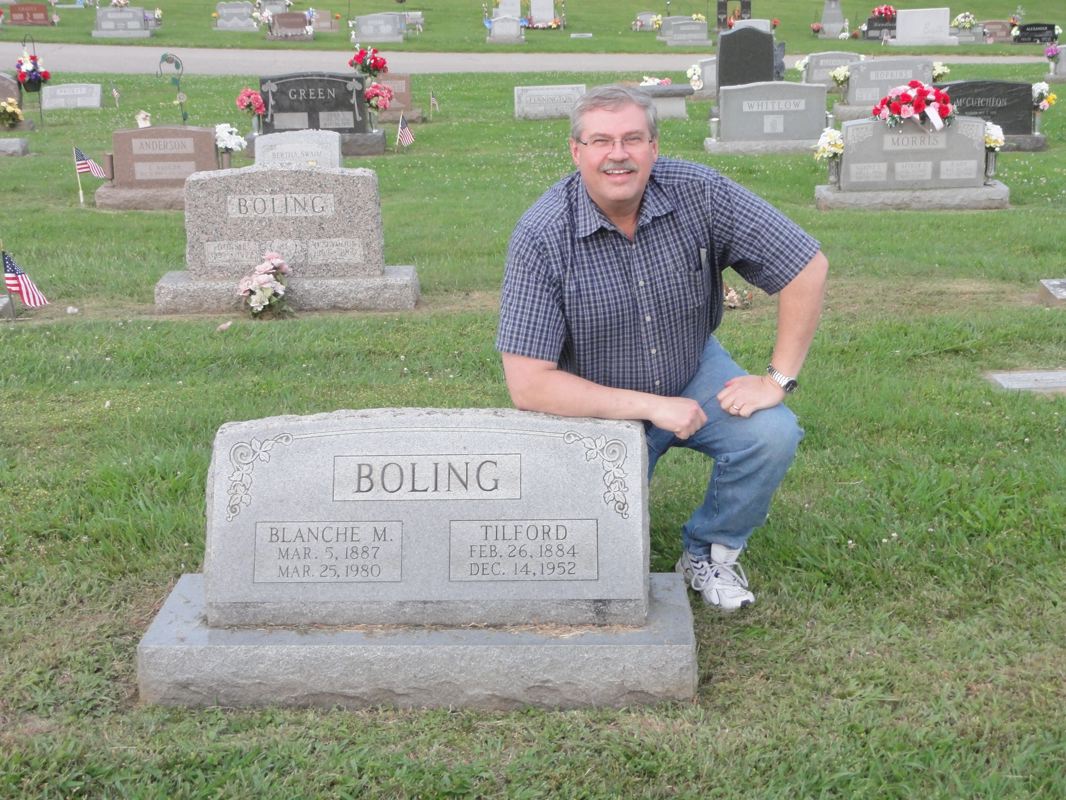 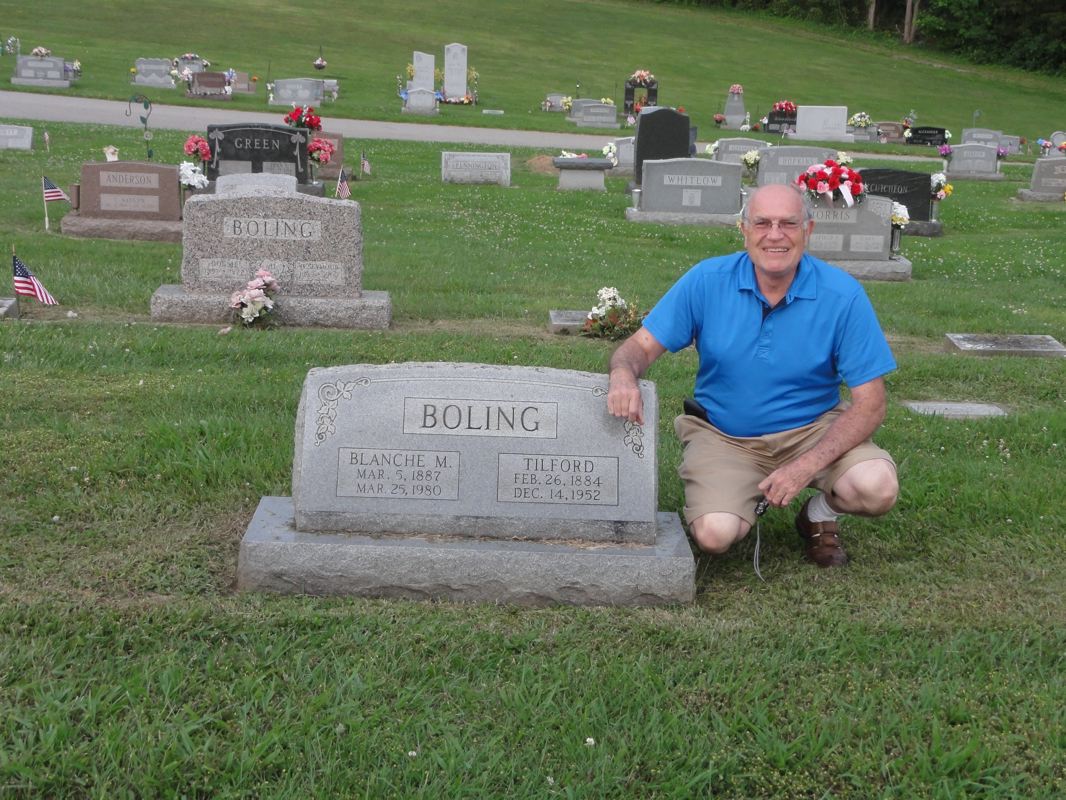 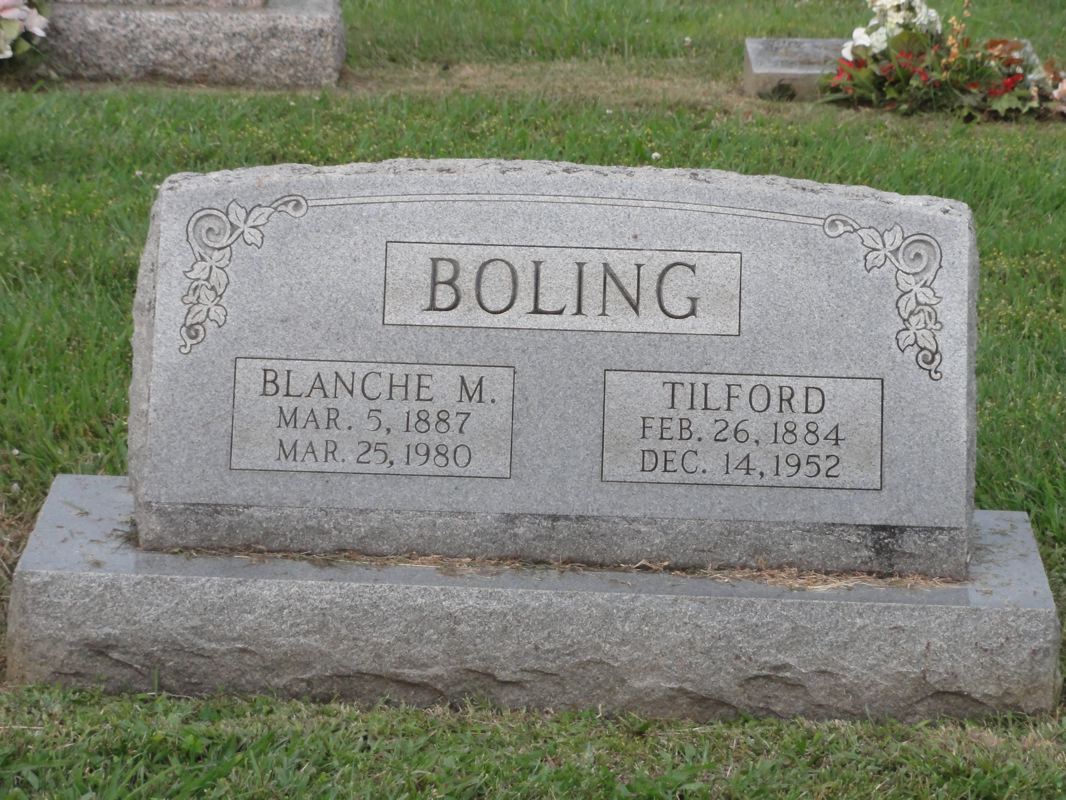 Web Editor's Note: On May 21, 2012 I visited the grave of Tilford Boling. I had just begun a week's Restoration Research trip with my dear friend Tom L. Childers. Tilford Boling's grave was early on our list of preacher's graves to be found. Special thanks to Tom for doing the driving on this trip.