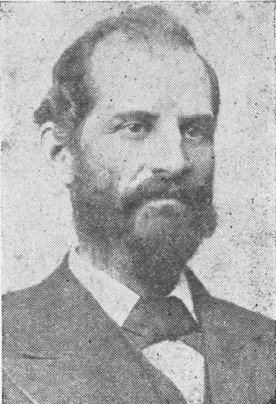 Several dates are vague in Shouse's history including his birth.  His obituary in the Christian Century set his birth in 1841, but the History of Woodford County had it as 1840.  Shouse was born near Midway to William and Betsy Wells Shouse. His father had a rope factory on the outskirts of Midway. His mother was a Baptist and sent Shouse first to Georgetown College.  But he became a student at Baconian Institute in Midway under the tutelage of Dr. L. L. Pinkerton. In 1859 Shouse was baptized by Pinkerton and followed him to Kentucky University in Harrodsburg in 1860.  Graduating from college, Shouse was ordained at Harrodsburg in 1864 along with B. J. Pinkerton and S. W. Crutcher, L. L. Pinkerton's son and son-in law. After returning to Midway, Shouse taught a private school for a while and then began preaching at the Christian Church.("Obituary of John S. Shouse," Christian Century 31 (28 May 1914): 18.)

He may have become the preacher there as early as 1865 or 1866 depending upon whether later sources, who report that he had a fourteen year ministry at Midway, counted the years 1877 and 1878 when Shouse was an elder at the church but was not employed as the preacher.  He left Midway in 1882 to pastor the Broadway Christian Church in Lexington, taking over for J. W. McGarvey. After nine years at that church, Shouse became the financial agent for the educational institutions of the Kentucky Christian Churches. One year later he moved to Columbia, Missouri, to pastor the church there for two years.  In 1894 he moved to the church in Mexico, Missouri, after which he returned to Lexington. In 1896 he participated in the ordination of Walter M. White in Midway and was referred to as the minister of the Broadway Christian Church.(J. Edward Moseley, "Fifty Years in the Ministry," Christian-Evangelist 75 (27 May 1937): 686.) However, by that time Mark Collis was the minister of that church.  It is evident that Shouse was associated with Broadway for the rest of his life. He pastored Chestnut Street Christian Church, a mission of the Broadway church, and served several rural churches. His obituary in the Christian Century stated that he had a "long ministry of more than forty years at Grassy Springs in Woodford County." However in the history, Grassy Spring Church, by Ermina Jett Darnell in 1933, Shouse is not on their list of ministers at all and is only mentioned once as having preached a revival on special occasions. (Ermina Jett Darnell, Grassy Springs Church n.p., 1933): n.p.)

Shouse was appointed a Trustee at Kentucky Female Orphan School in 1865 and served for several years.  It was at his suggestion that the Trustees considered and selected in 1894 the first woman to serve on that Board.(Millennial Harbinger 4 (August, 1861): 473.)

Married to Anna Armstrong, Shouse had six children. His son, Jouett Shouse, became famous in political circles and served as a state senator in Kansas and as Assistant Secretary of the Treasury under the Wilson regime. The other children were: William Mitchell Shouse, Loulie Shouse Ellett, Mary Lee Shouse who died in 1902 unmarried, Jean Paul Shouse who died in 1913 unmarried, and Angie Armstrong Shouse Smith of Nebraska.(William E. Railey, History of Woodford County, (Versailles, Ky., Woodford Improvement League, 1968): pp. 225,26)

In 1911 John Shouse preached the funeral of J. W. McGarvey, the hero of his later years as Pinkerton had been of his youth. Although Shouse was baptized by Pinkerton and was treated as a son, the two became separated by the controversies occasioned by the Civil War and by the widening gap between liberal and conservative Disciples. Had Pinkerton lived longer the separation would have become even more apparent.

On May 14, 1914, John S. Shouse died suddenly at his home in Lexington at age seventy-three.(Obituary of John S. Shouse, p.18) He is buried in the Lexington cemetery.(Alonzo Willard Fortune, The Disciples of Kentucky,  (Lexington, Ky. : The Convention of the Christian Churches In Kentucky, 1932, p. 371) He had had a long and distinguished ministry.

Russell Ward in Church Life in the Bluegrass described Shouse as "sweet-spirited, proclaiming the gospel in its simplicity and fullness—and tenderness." (Ward Russell, Church Life In The Bluegrass, 1785-1955, (Lexington, Ky, Ward Russell, 1933, p. 169)

The beginning and growth of the Restoration Movement in the mountains of Eastern Kentucky is centered, largely, around the old Kibbey Homestead, a great two-story log house, near Grayson, Ky. It was built more than a hundred years ago, and is still occupied. It was ceiled and weatherboarded with timber sawed by hand, by slaves (there were no sawmills then). The old home has beautifully dressed stone chimneys, though most of those earliest mountain homes had chimneys of mud, stones or sticks.

This old home was the stopping place for all preachers, and it was there they held their services, since there were no church buildings. Among the earliest preachers of the Restoration Movement was John S. Shouse, of Lexington, Ky. While still a young student, he preached his first sermon in the old Kibbey Home and remained to hold a meeting, which resulted in a large number of additions. Among them were two of the Kibbey brothers, Frank and Will, who immediately joined Bro. Shouse in a preaching tour over Carter County. There were large numbers of additions and several churches established.

Bro. Shouse later preached in the Blue-grass section of Kentucky, for many years, and was greatly loved. He was much interested in the education of young men for the ministry, and in the Midway School for Orphan Girls. Some of these young people were taken into his home in Lexington, during vacations, and became members of his family.

Bro. Shouse was an able speaker, an orator, and a clear thinker. His memory is kept green by all who knew and loved him.

Note: J.S. Shouse was a chief fund raiser for the College of the Bible in the late 1800's. He was elected as trustee of the college in 1865. He was also minister of Midway Christian Church after the tenure of L.L . Pinkerton. He died on May 15, 1914 at the age of 73.

The grave of John S. Shouse is located at Lexington Cemetery, Lexington, Ky. Heading west from downtown on West Main Street enter the cemetery to the right. Continue through the iron gates on the main little road (Main Avenue). Go between the little lakes to the new part of the cemetery and turn left as you are passing section by "16."("16" is on the right.) Once you've made the left turn Section "F-1" will be on your right and "I-1" will be on your left. Go about three-quarters of the section down and look to the left. Grave is located a few markers in.Section I-1 Lot 46 W1/2

Note: While parked there don't miss Charles Louis Loos across the street in section "F-1," and Caroline Pierre is close by in little wedge north of "F-1."

See Where Shouse Is Buried At Lexington Cemetery, Lexington Kentucky