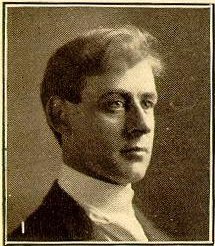 Biographical Sketch On The Life Of Pearl H. Welshimer

P. H. Welshimer was born on a farm near York, Union County, Ohio, April 6, 1873. At the age of nine his parents moved to West Mansfield in an adjoining county where they still live. There he was reared and attended the public schools. He graduated at Ohio Northern University at Ada in 1894 and from Hiram College in 1897. Spent five years in his first pastorate at Millersburg, Ohio. January 1, 1902, he took the pastorate at Canton, Ohio, where he still resides. The church at Canton in this time has grown from a membership of less than four hundred to a resident membership of 3,400 with a non-resident of seven hundred. The Bible school has grown from less than two hundred to be the largest in the world. The enrollment in the attending school is above 5,000. Cradle Roll and Home Department bring the total enrollment to nearly 6,000. May 15, 1900, he was married to Miss Clara Hornig, of Vermilion, Ohio. They have three children--Helen, Mildred and Ralph, whose ages are 16, 14 and 10.

Mr. Welshimer possesses a winning personality, though he is shy of using it for popular ends. He impresses one with the idea that he holds within himself an immense amount of reserve force. While his achievements for any day are great, he makes one feel that ne plus ultra has no place in his outlook. His tomorrow is always bigger than his today.

What are the chief elements of his phenomenal success?

(1) An overmastering faith. He believes something and this something is definite. He does not attempt all things that by all means he may do nothing. He plans his work, and this is wisely done.

(2) But he knows the plan is nothing, if it is not vitalized by personality.

(3) He is himself the battery which energizes every part of the machinery. Without Welshimer the work at Canton would cease to be a wonder. But this is the fate of all great personalities. Spurgeon was a great personality, and also a great organizer, but since his death his work has dwindled. A steam engine is worthless without the steam. An army may be a power for weakness if it has not a competent and inspiring leader. Napoleon was more than all his men. Welshimer is more than all his organizations, and yet without these organizations, he could not do the great work he is doing. His great success is owing to personality wisely adjusted to well considered plans for work.

What he can do, cannot others do? We answer, No. Right here is the danger of what is called method. David could not wear Saul's armor, but he could do even a greater work than Saul could do. Everyone must plan and work out his or her own methods. Schools for Methods and lectures on Methods, may do much harm, if not wisely qualified. Mr. Welshimer's church and school would be a white elephant in the hands of some men of even more talent than he has, but of an entirely different kind. Every man has his place, but Welshimer's place is not for every man.

—W. T. Moore, ed. The New Living Pulpit of the Christian Church-A Series of Discourses, Doctrinal and Practical, by Representative Men among the Disciples of Christ, St. Louis: Christian Board Of Publication, c. 1918. Pgs. 361-362.

Special To The Reporter

CANTON—Funeral services will be held Monday at 2 p.m. int he First Christian church here for Rev. P. H. Welshimer, internationally known minister of the church who died Friday in Aultman Hospital. He was 84.

He was stricken with bronchitis late in December er and his condition gradually became worse.

Paster of the church 56 years, during which he had but one month’s vacation when he spoke in Europe, Rev. Welshimer built his congregation from 400 members on January 1, 1902, to its current 6,150. It is the largest church in Canton, largest of its denomination in the world and one of the four largest churches in the U. S.

At his church desk at 7 a. m. every day of the week, including Sunday, he often made 50 hospital daily, in addition to answering a large volume of mail. During his long pastorate here he officiated at 8,621 weddings and 8,000 funerals, wrote a weekly Sunday School lesson for Lookout magazine, authored three religious books and numerous tracts, which have been published in many languages.

The beloved pastor never read a sermon in his long ministry. He was a doctrinal and Bible preacher who capitalized on current events.

Native of Union County, Ohio, he drove a huckster wagon for two summers while still in grade school. He was 15 when he wa certificated to teach school. He began the study of law at Ohio Northern University in 1892 but professors persuaded him to prepare for the ministry. After graduation in 1894. He attended Hiram College.

A short time before graduation, he resigned to become minister of First Christian Church at Millersburg, delivering his first sermon there on March 18, 1897. It was there he mat Clara Hornig, a hat designer of Cleveland. They were married in May, 1900, and she died earlier this year.

Recognized over the years as the world’s foremost expert on Bible schools, he was called upon to speak throughout the nation and in recent years did most of his traveling by plane so he could be in his own pulpit on Sunday mornings.

Surviving a daugter, Mildred, who resigned as dean of women at Milligan College in Milligan, Tenn., so she could be at her father’s bedside, and a son, Ralph, Canton sports good store owner. Another daughter, Helen, a distinguished journalist and poetess, died in 1953.

Pastors officiating a Monday’s services will be included the Rev. Harold Davis of the church, the Rev. W. R. Walker of Columbus and the Rev. S. S. Lappin of Kansas City. Burial will be in Forest Hills Cemetery. Friends may call at the church after 4 p. m. Sunday and also Monday morning.

Rev. Welshimer was well-known in Tuscarawas County, having made numerous speaking engagements at various church and civic events. He made the dedicatory address last year when the First Christian Church at 318 E. 4th St., Dover, dedicated a Bible School addition.

Directions To The Grave Of P.H. Welshimer

The P. H. Welshimer family are buried in the Forest Hill Cemetery in Canton, Ohio. North of Canton on I-77 take Exit 109 (Everhard Rd.) and head east. Go to Main St. and turn right (south). Go about 1/2 mile and the cemetery is on the left. Enter the cemetery and head past the office. The Welshimers are in the section to your left. As the road bears around to the left you will pass two mausoleums. The Welshimer plot will be on the left before the third mausoleum. 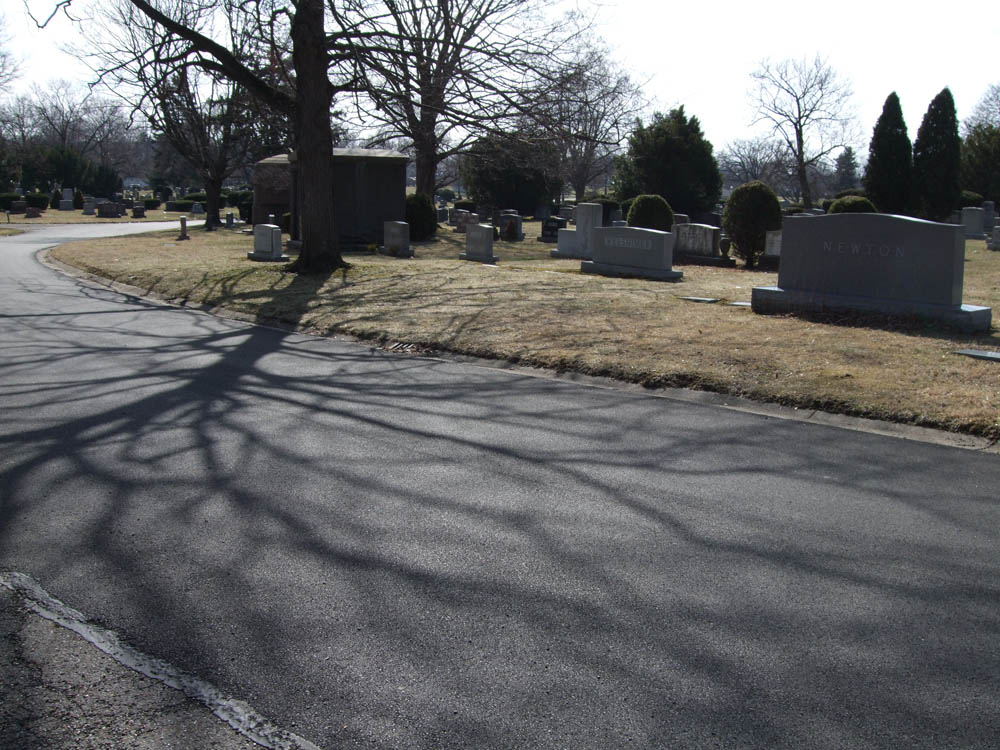 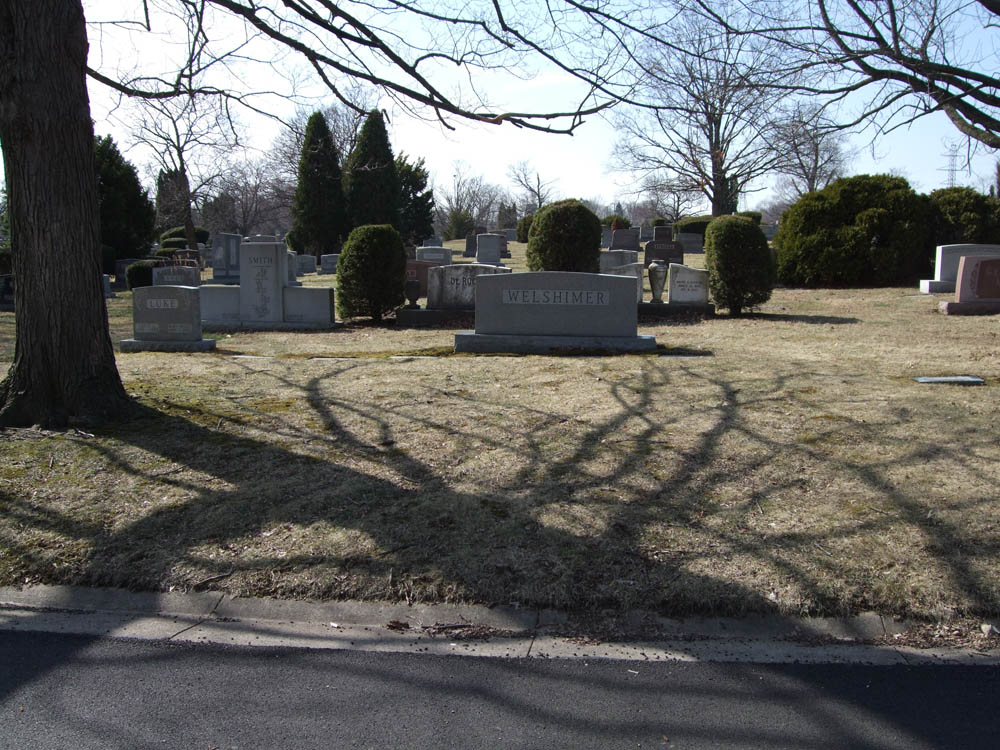 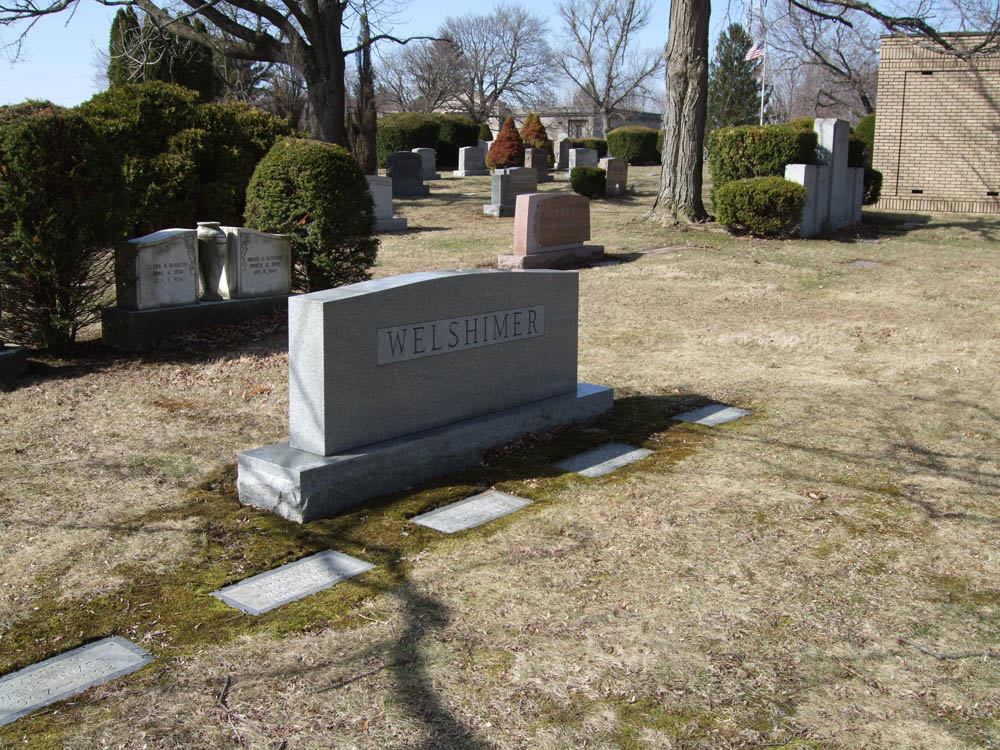 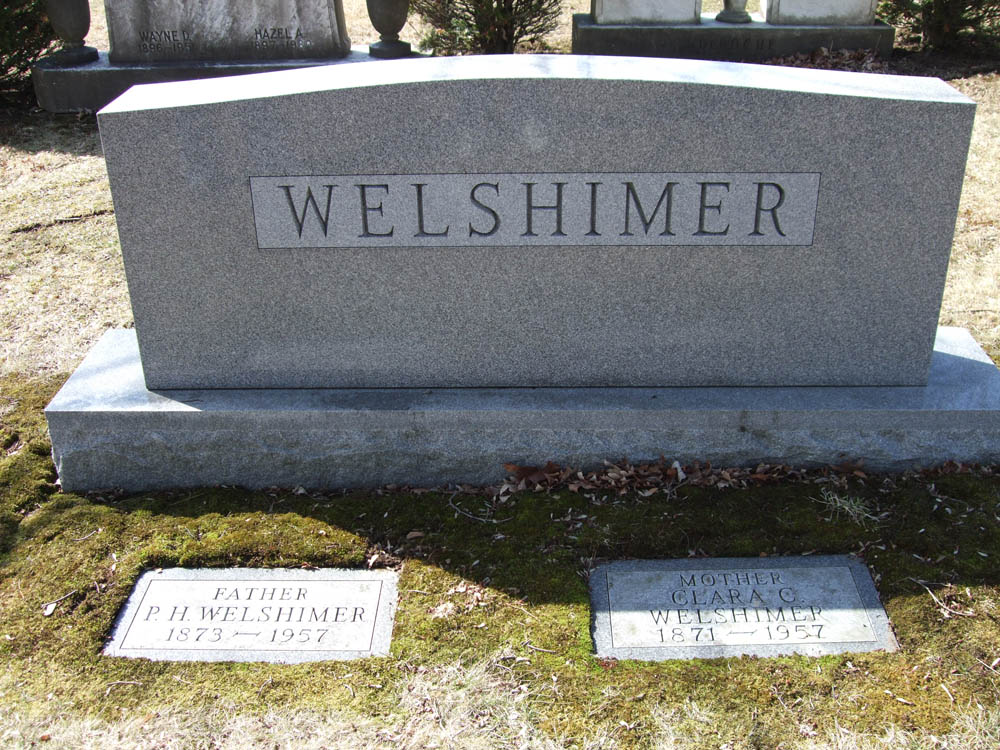 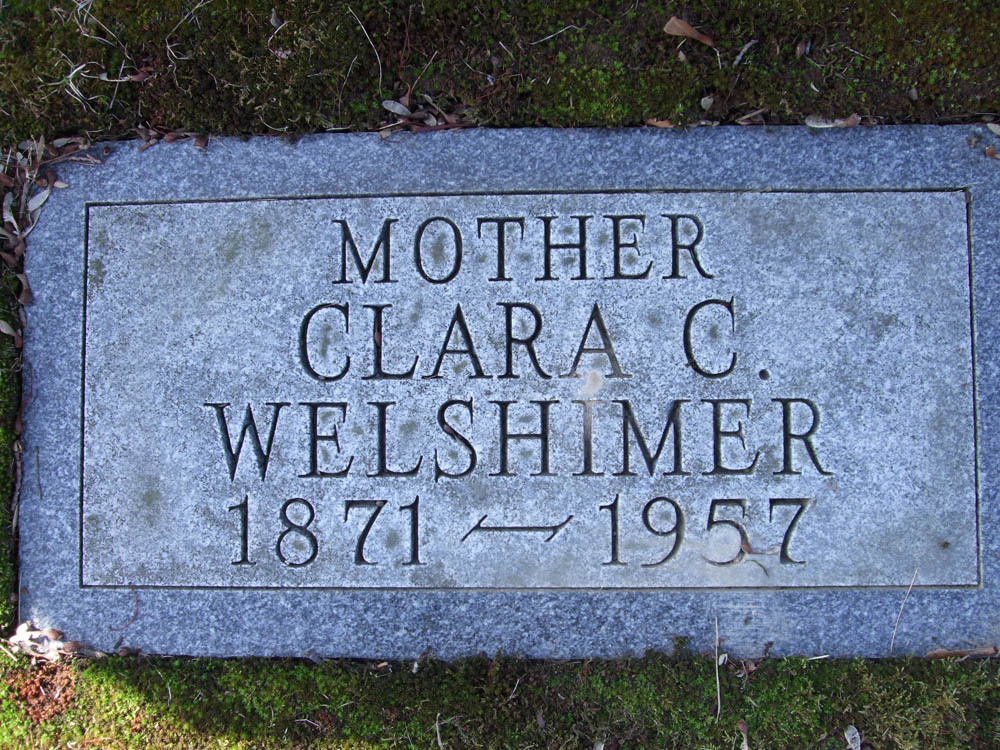 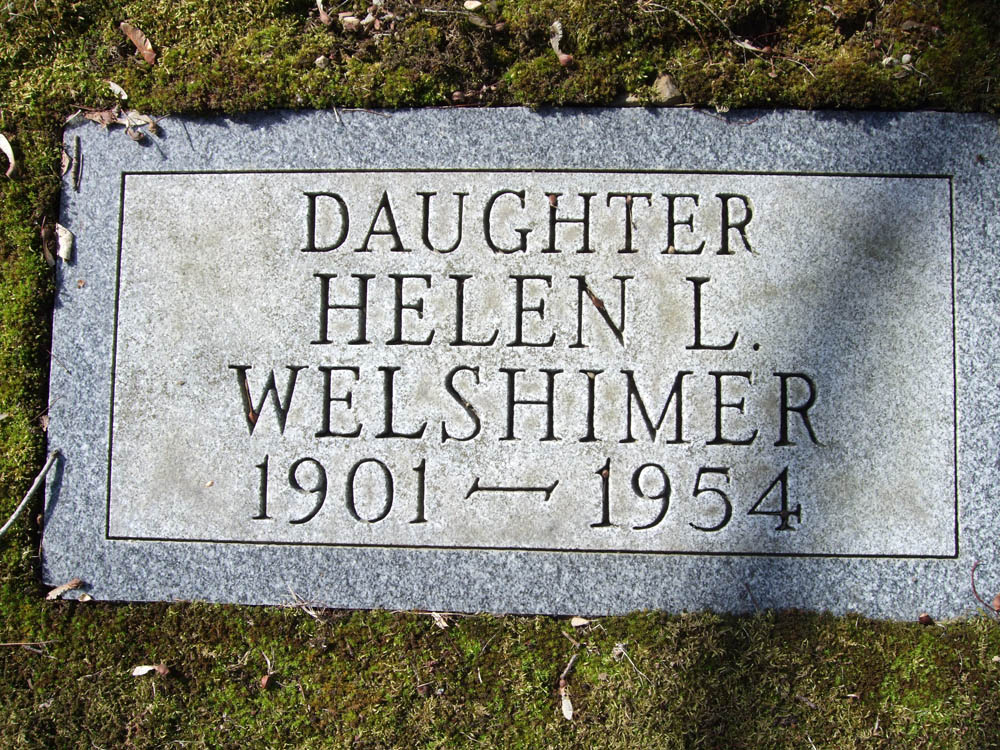 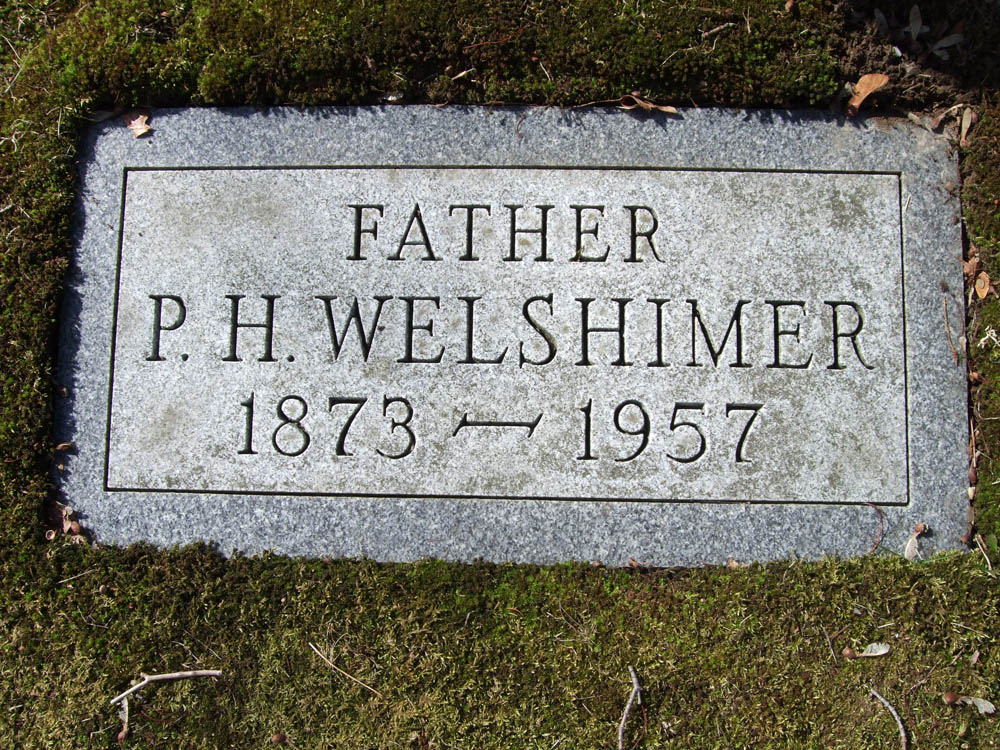