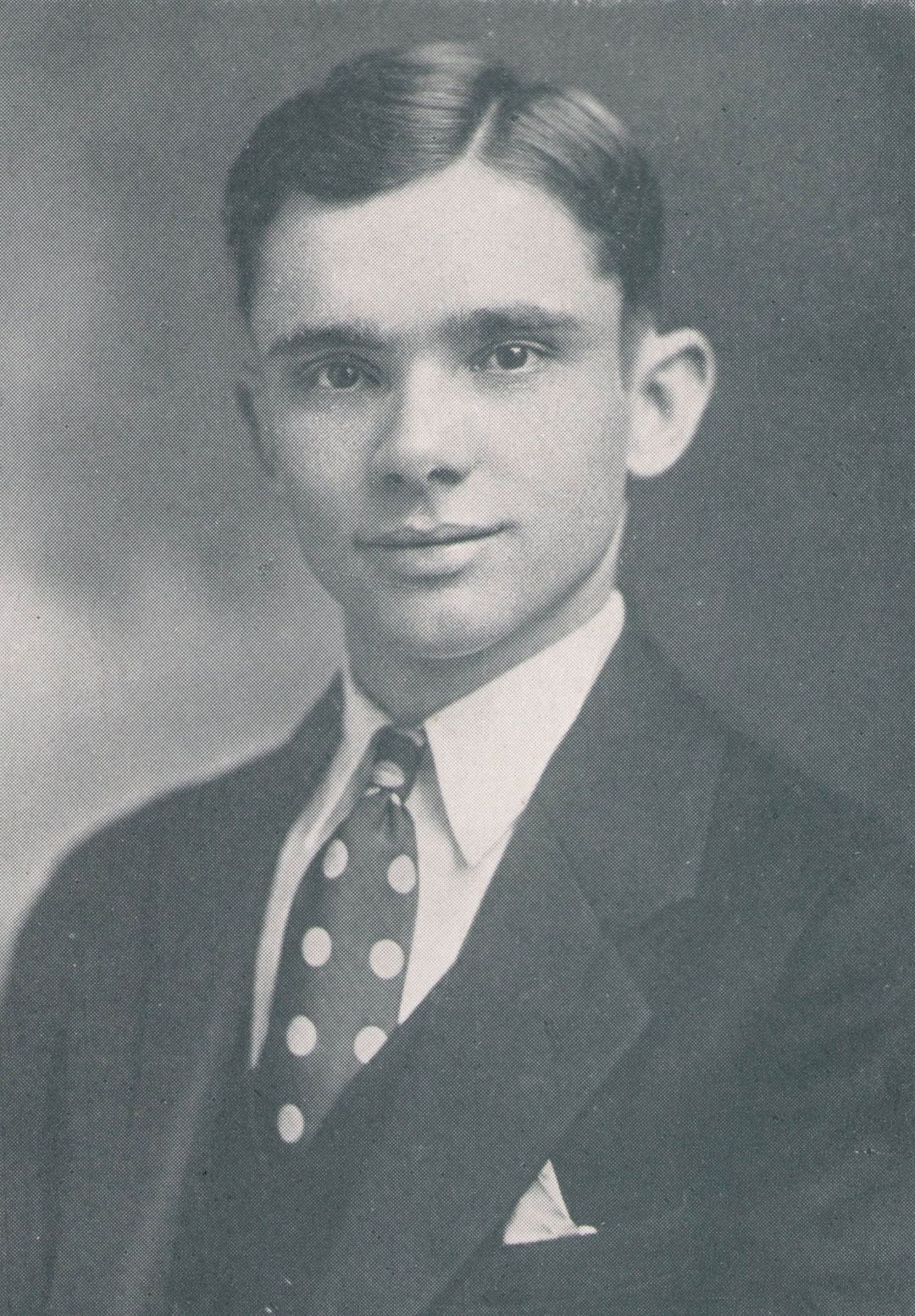 The Life of Harris J. Dark

At the age of twelve, Harris was baptized into Christ in at the at the hands of J. M. Gainer. It was in September 1917 Harris received his early education in local schools, and graduated high school from Central High School in Columbia. Not too far from his home was Burritt College. Immediately after high school he transitioned to Spencer, Tennessee to where he did two more years of high school studies. While at Burritt, he quickly became known for his speaking and debating skills. It was there that, in 1923, he began his preaching career at the Spencer church of Christ. He was eighteen years of age. 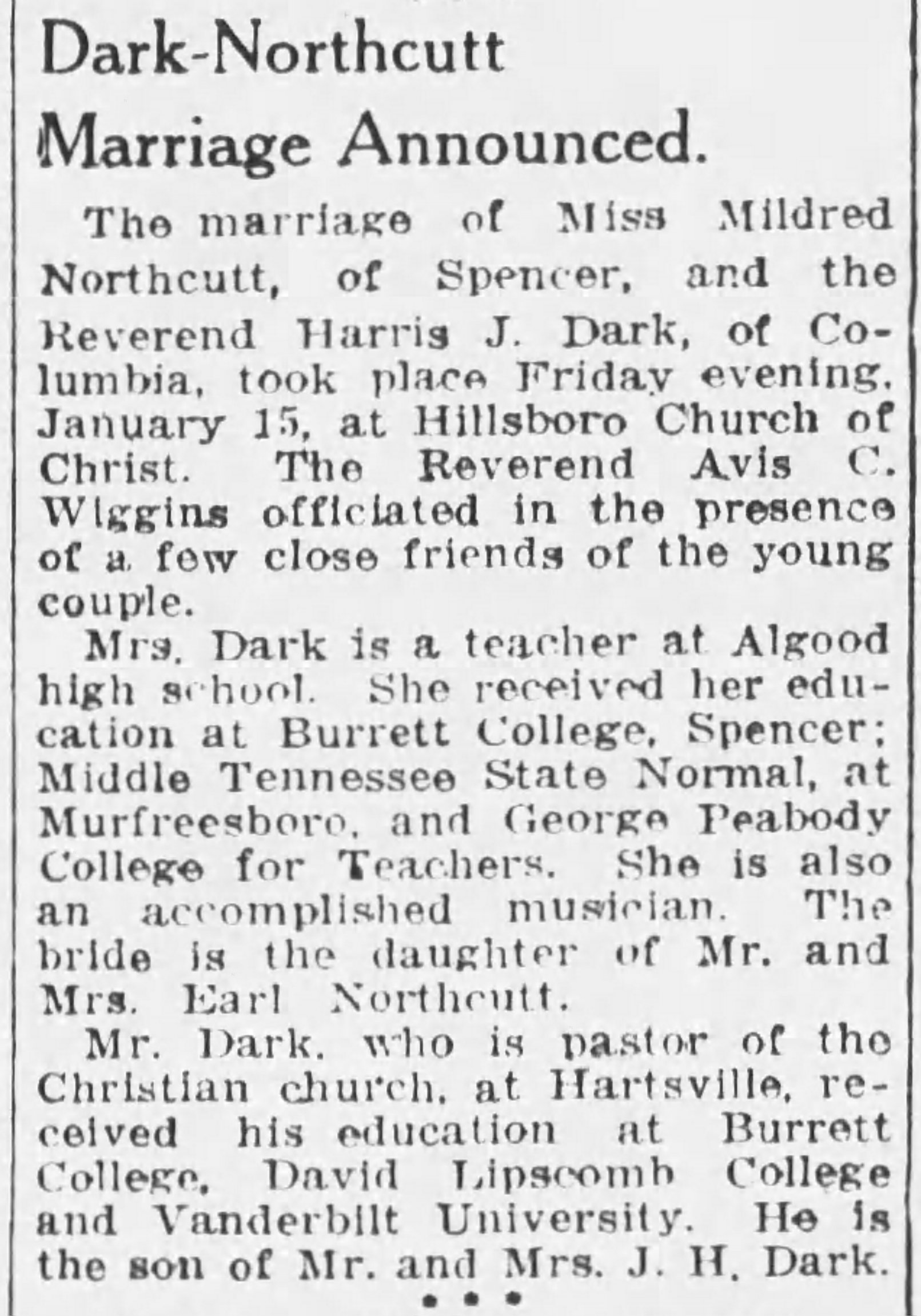 From Burritt, he set his eyes toward Nashville where he began his college work at David Lipscomb College. While there he was awarded a scholarship to study at Vanderbilt University. From there he went to Ashland, Kentucky to attend Randolph-Macon College. It was there that he was awarded the B.A. Degree in 1934. While in the region, he took the opportunity to go up to Richmond, Virginia, where he studied at the University of Richmond, achieving the M.A. degree in 1940. From there he went back to Vanderbilt University in Nashville, Tennessee, where he studied on a post-graduate level for a year. Then, it was back to Richmond where he studied at Union Theological Seminary another year. His terminal degree of Ph.D. in Philosophy was acquired in 1948 from the George Peabody College in Nashville. 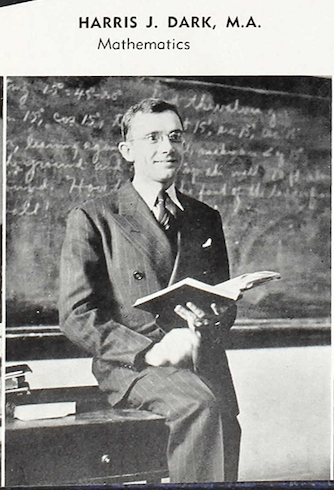 In 1943, Harris became Professor of Mathematics and Department Head at David Lipscomb College. While there he also taught some of the Bible courses. In 1958, he departed and was hired by Middle Tennessee State University in Murfreesboro, Tennessee. He served for thirteen years there as head of the Mathematics Department, retiring in 1971.

Then, he preached for the Bardstown Road church in Louisville, Kentucky for a little over a year, 1939-1940. From northern Kentucky, he moved back to Nashville where he served the Madison church for three years, 1940-1944.

From 1944-1948 he preached for the Chapel Avenue congregation in Nashville. 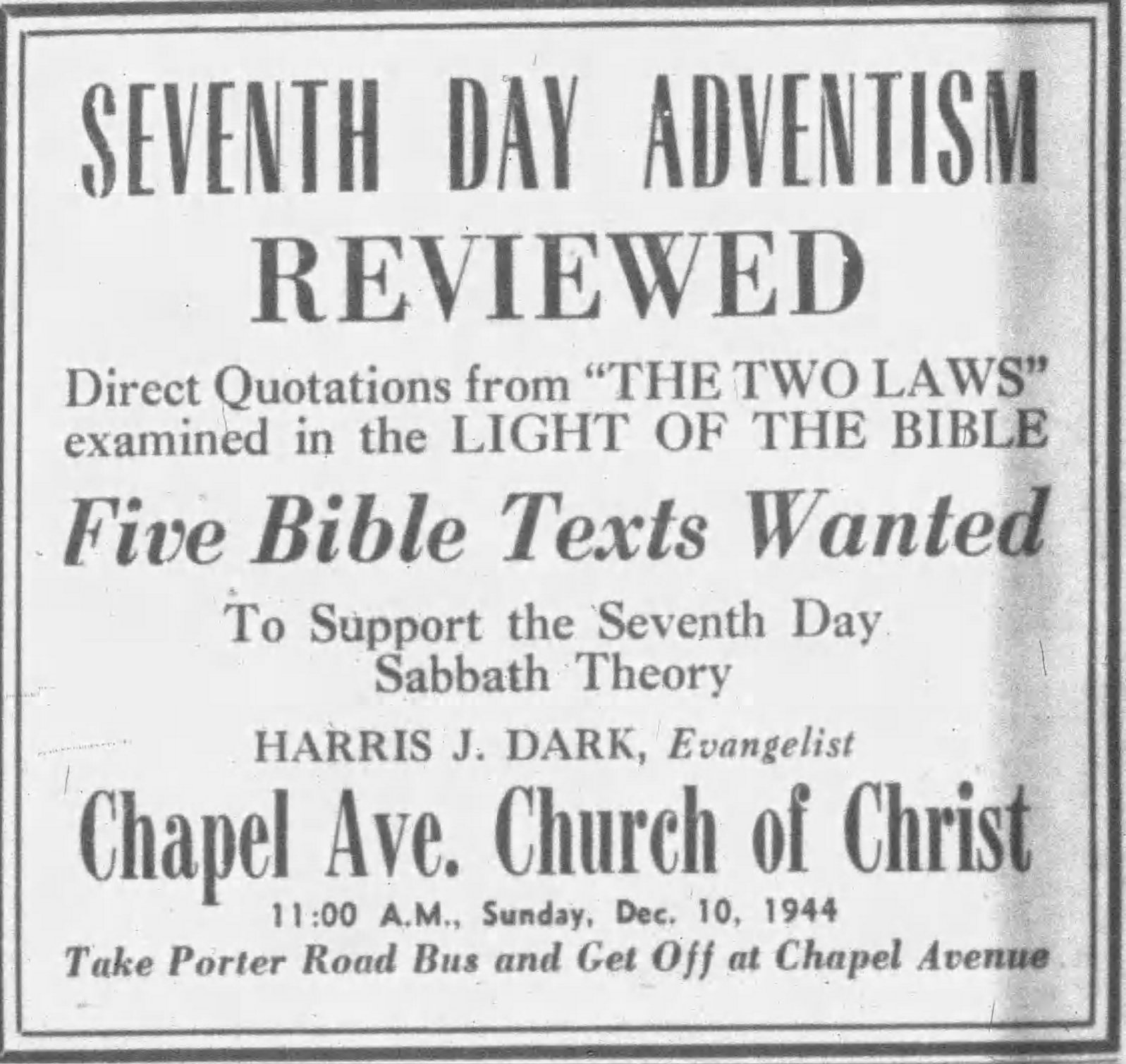 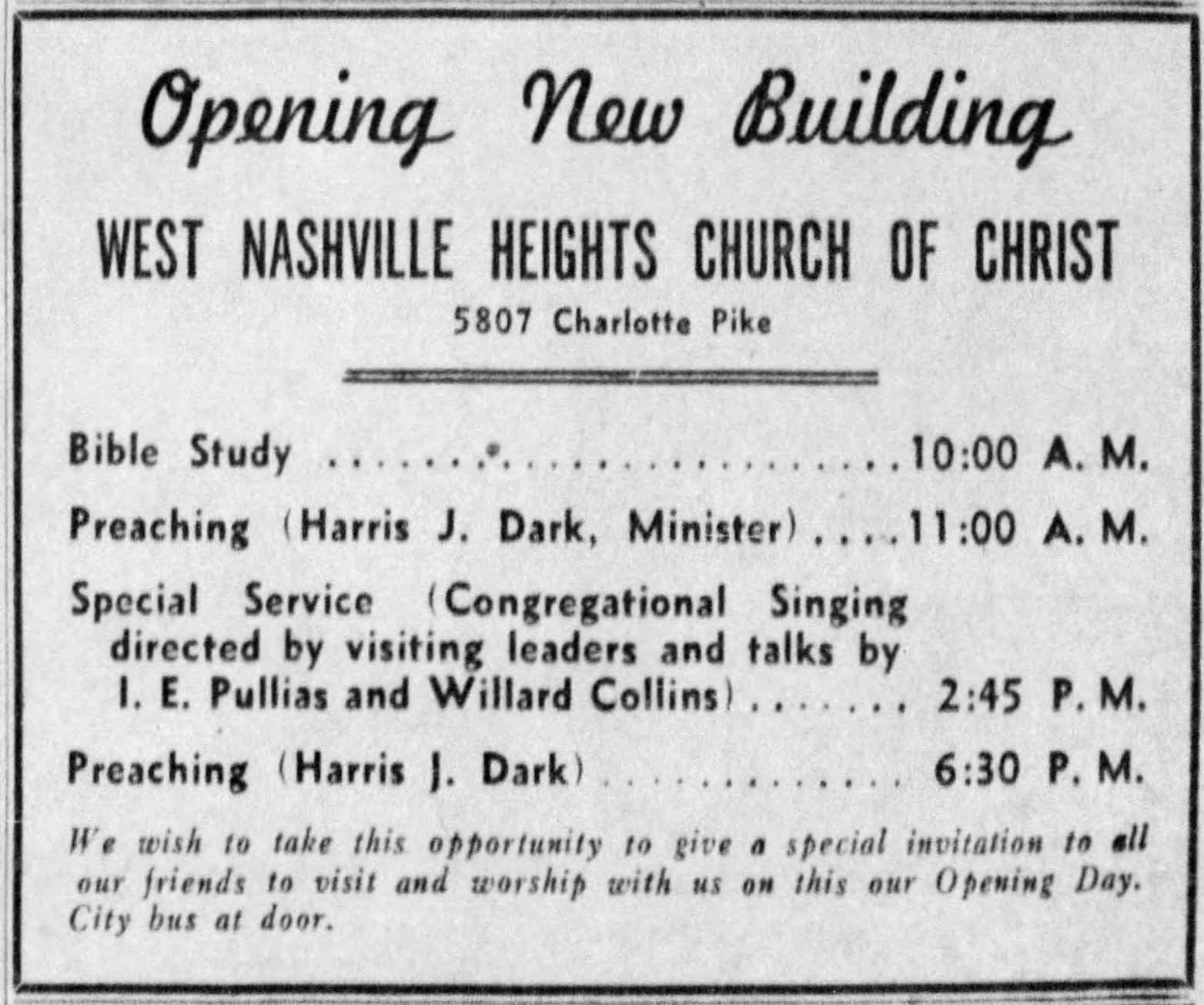 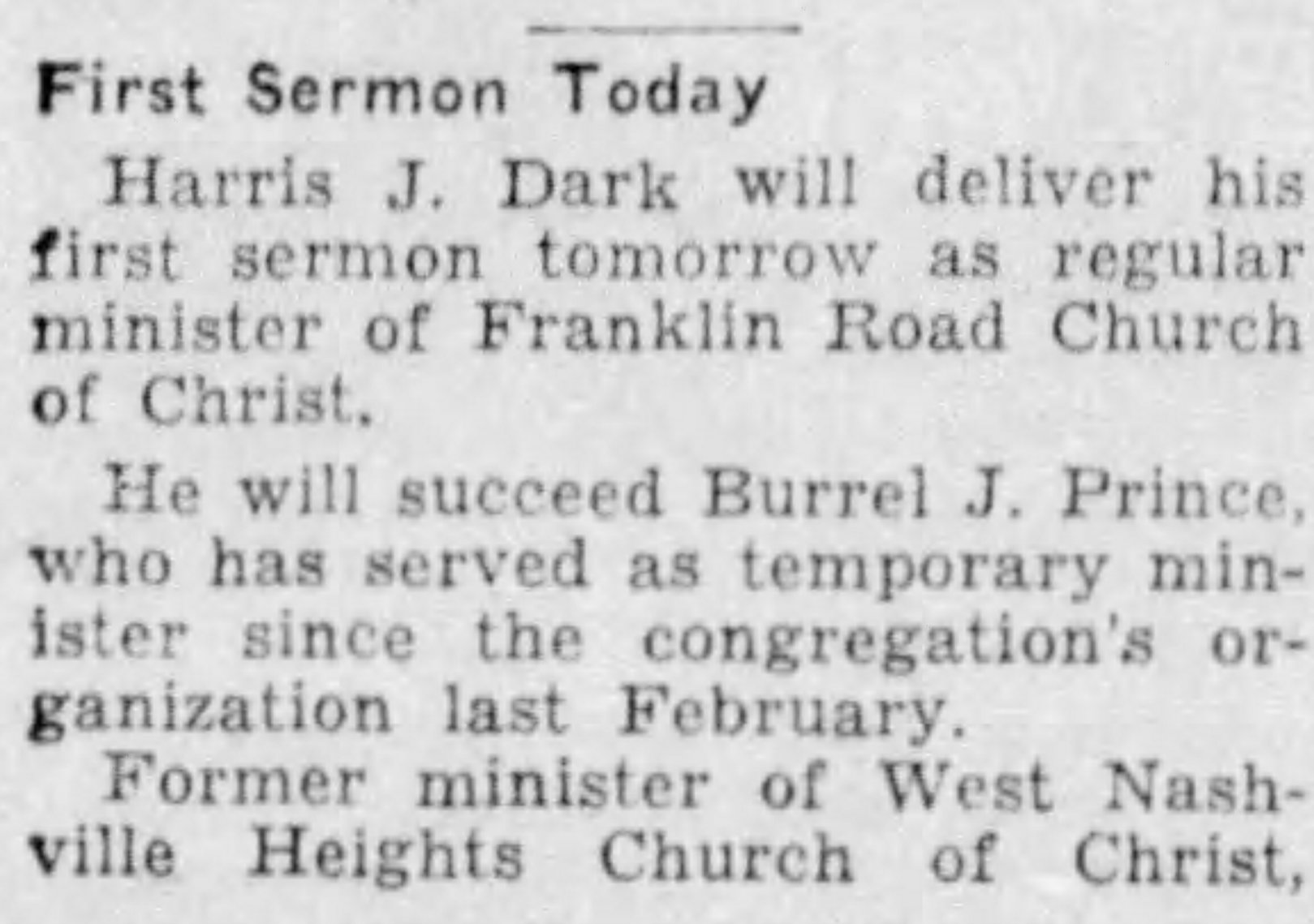 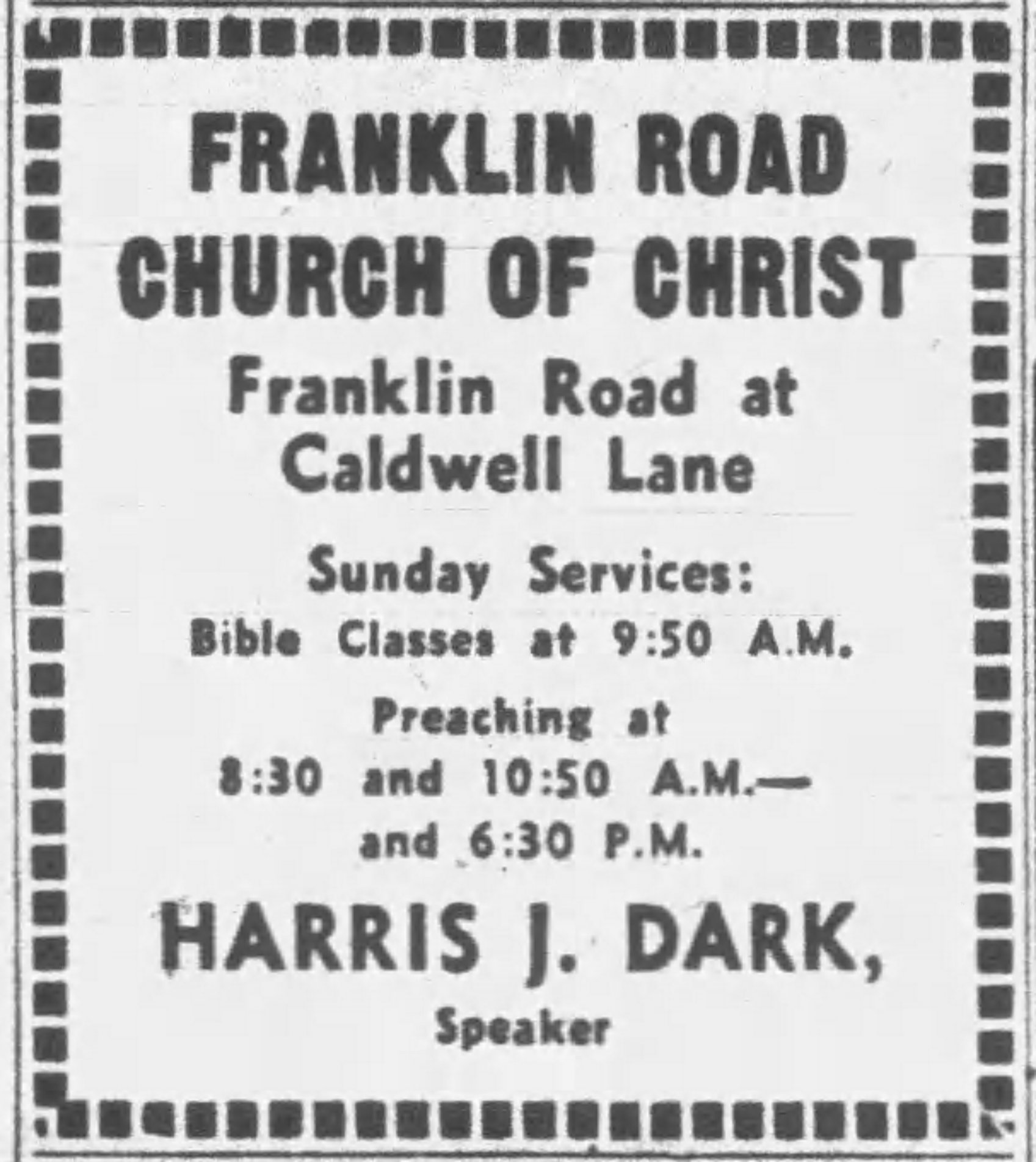 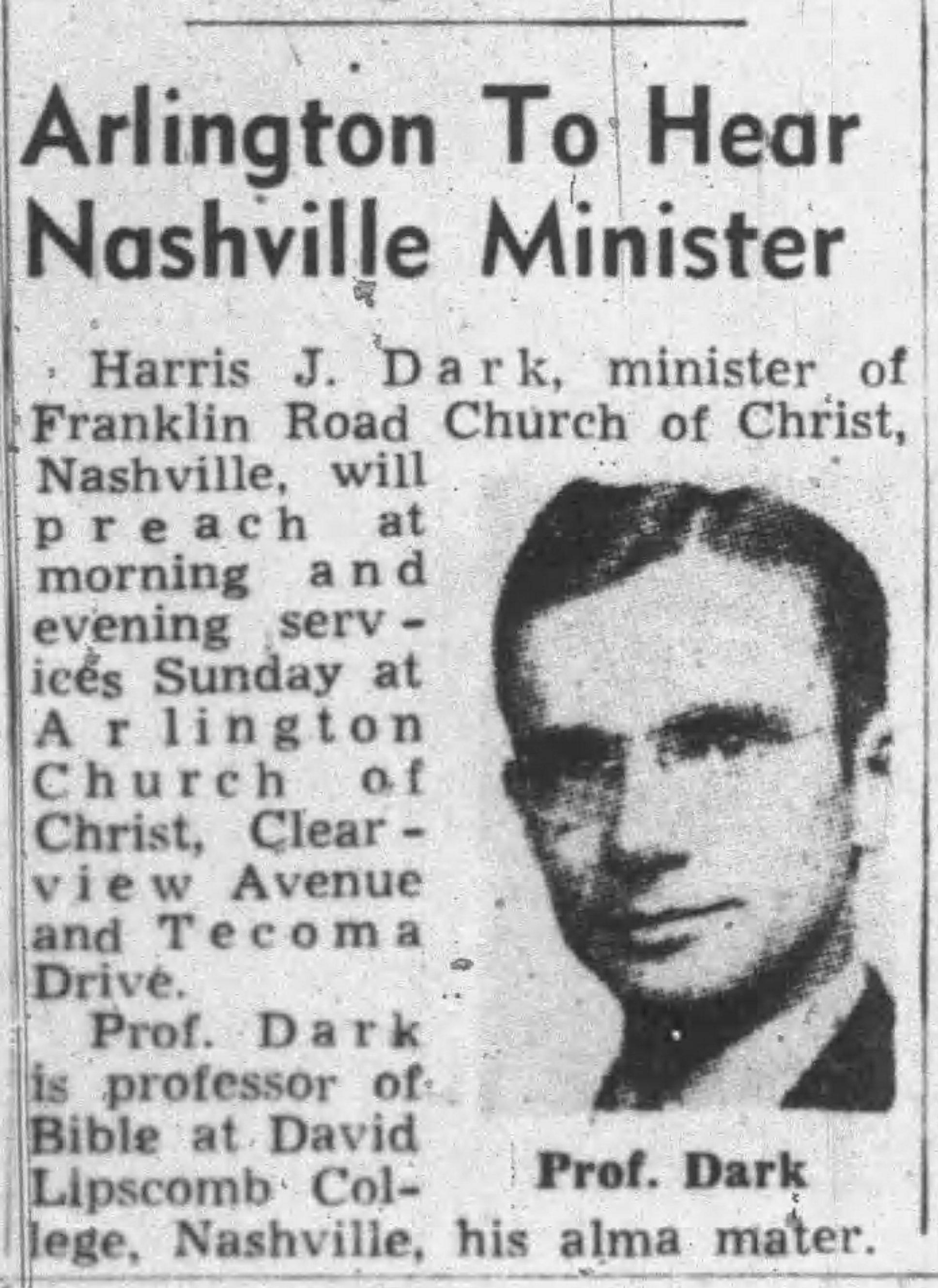 He utilized the power of radio to get the gospel to the masses. He spoke regularly on radio while in Richmond on WMBG, and then at Portmouth, Louisville, and in Nashville on WNAH.

Harris Dark was a writer. In 1947, he produced a volume through DeHoff Publications, entitled, “God Hath Spoken.” It was a book of sixteen lessons that was meant to take an individual with no knowledge of the Scriptures to becoming a Christian and setting up the church of Christ in his location. In 1960, he edited a lectureship volume for the Franklin Road church in Nashville from a lectureship conducted there the previous years. It was entitled, “Give Us A King,” and it was published by Norris Publications in Russellville, Alabama. 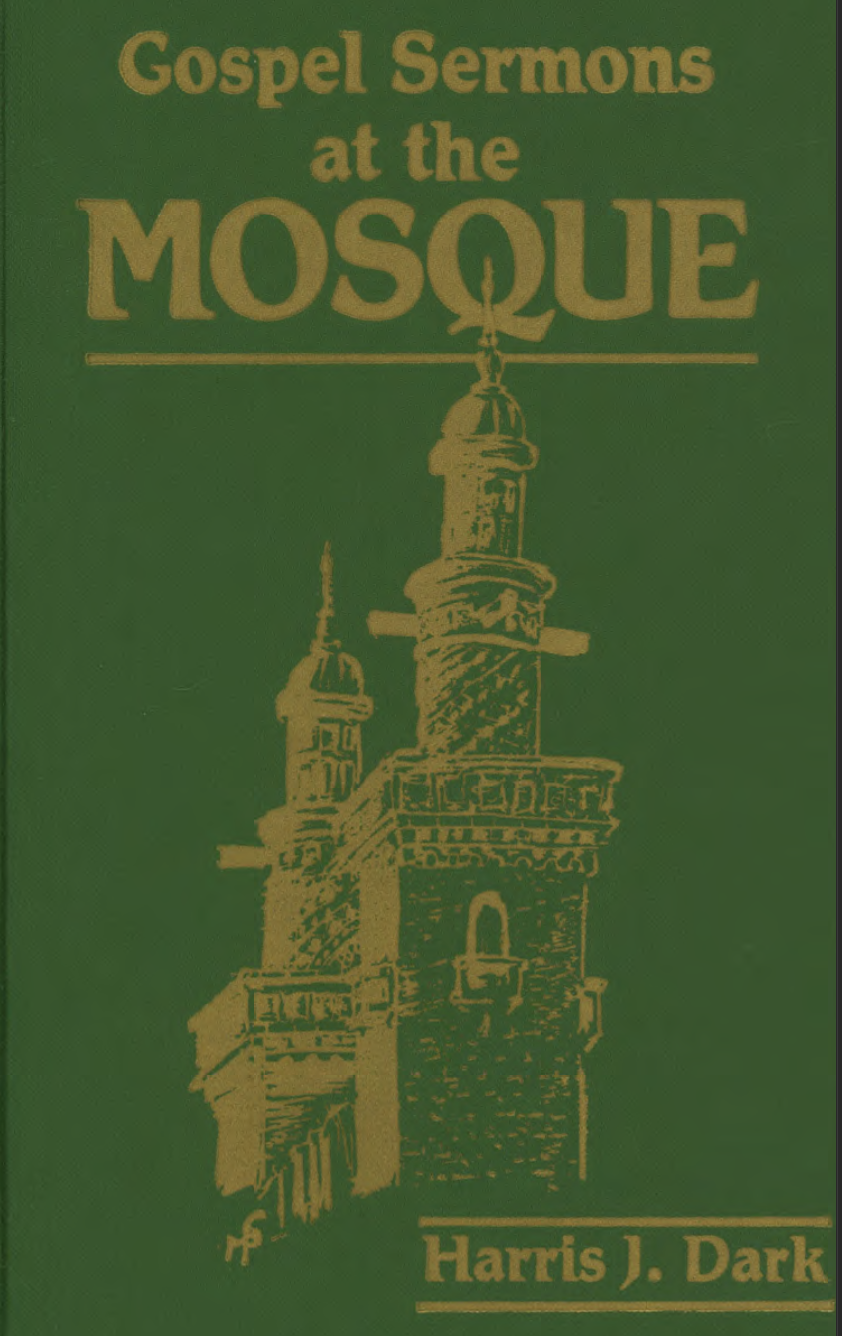 One of two sermon books produced by the family

In 1987, two more volumes were produced by his widow and children. They were books of sermons. One was entitled, “Gospel Meetings At The Mosque,” was from a series of sermons brother Dark preached in Richmond, Virginia in 1948 at the large city auditorium, called the Mosque. Also, some of the lessons were preached on the radio while he was in this meeting. The other volume produced by Mildred Dark was a book entitled, Sermons on Church Trends. This series of lessons dealt with several controversial biblical topic in and out of the church. 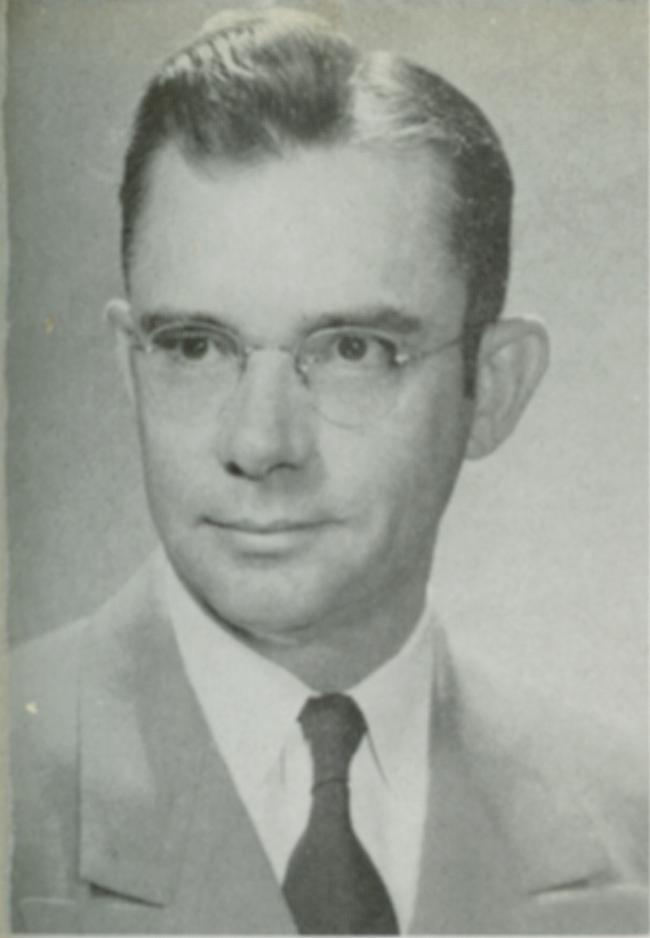 Bro. Dark had the opportunity to travel to many places in the world to evangelize. In the summer of 1959 he worked for fourteen weeks in Eastern Australia, converting many to Christ. While on this trip he baptized a man who did much good as a gospel preacher in on the Eastern Coast. From 1973 to 1974 he returned to Australia for a year to preach.

While teaching in the Math Department at David Lipscomb in the early 1950s, churches of Christ were entering a phase of division over how to support widows and orphan, and how churches could cooperate in evangelism. These divisions were felt not only in the congregations, but on the college campuses as well. In what was later referred to as “the clash,” Dr. Dark determined to part ways with his brethren at David Lipscomb College. This was what led him to take a similar position at M.T.S.U. in Murfreesboro. The remainder of his life was spent working among the non-institutional brotherhood. 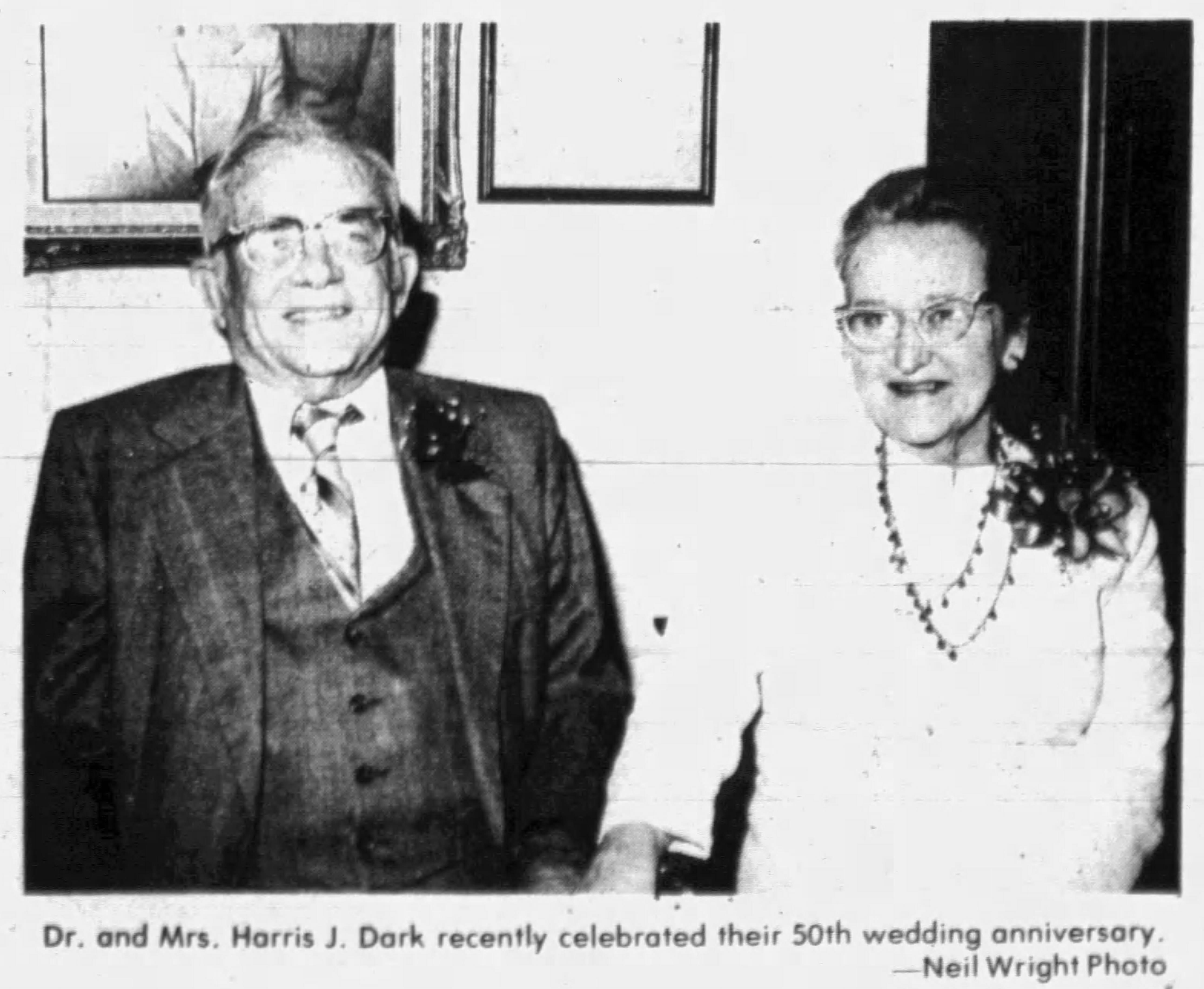 His last years were spent in Murfreesboro, Tennessee. He passed from this life September 19, 1984. His funeral was held in the chapel at Woodlawn Cemetery and was officiated by long-time friends, Sewell Hall and George W. DeHoff. Burial followed in the cemetery there, near the graves of many great preachers, elders and other leaders among churches of Christ. Mildred continued living several more years. She passed away June 29, 1996. Burial followed beside her husband of over fifty-two years.

We learned recently of the death of Harris J. Dark of Murfreesboro, Tennessee. Brother Dark was incapacitated the last few years of his life. For years he taught math at David Lipscomb College until a clash over his conservative convictions brought about his resignation. He then taught at Middle Tennessee State University in Murfreesboro for a number of years. He was always a preacher of much ability. He was blessed with a brilliant mind. Some of his tracts dealing with the nature, work and organization of the church were classics. The world is better because he lived in it. We express to all the family our deepest sympathy.

The Harris Dark family are buried in the Woodlawn Cemetery in Nashville, Tennessee. The cemetery is located at Thompson Lane, Nashville, Tennessee. The GPS below is the exact location of the grave in the cemetery. It it located on the north side of Thompson Land and very near the road. Photos below will also help one find the grave. Of course, the Woodlawn Funeral Home office is always willing to assist. 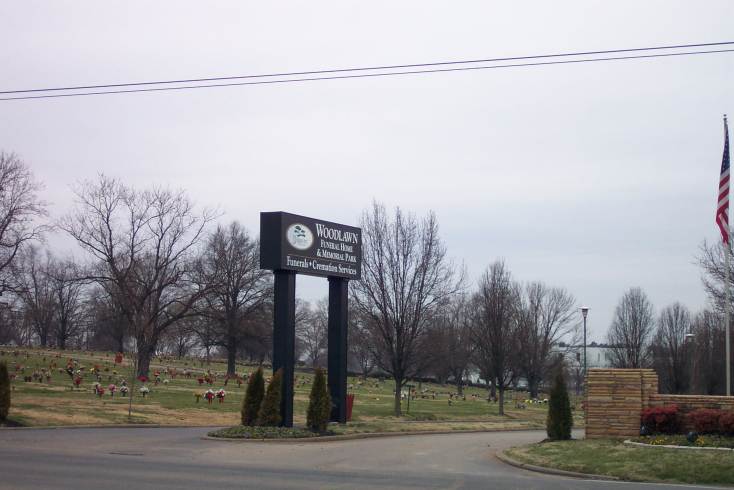 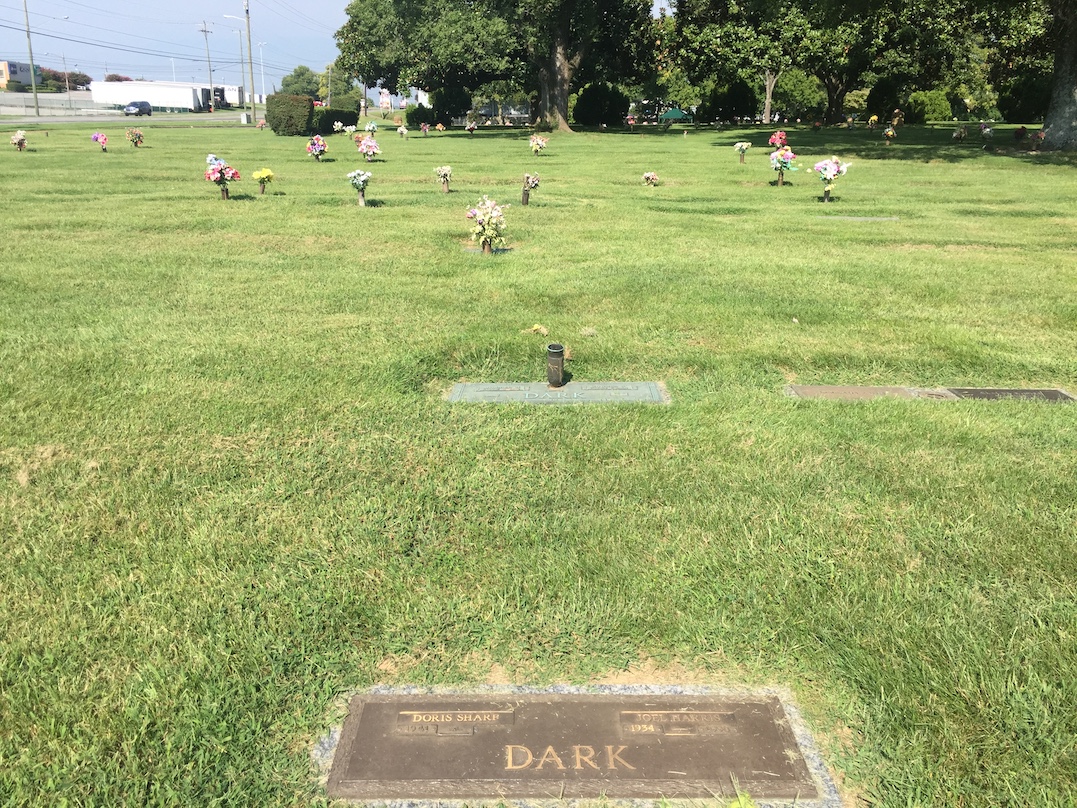 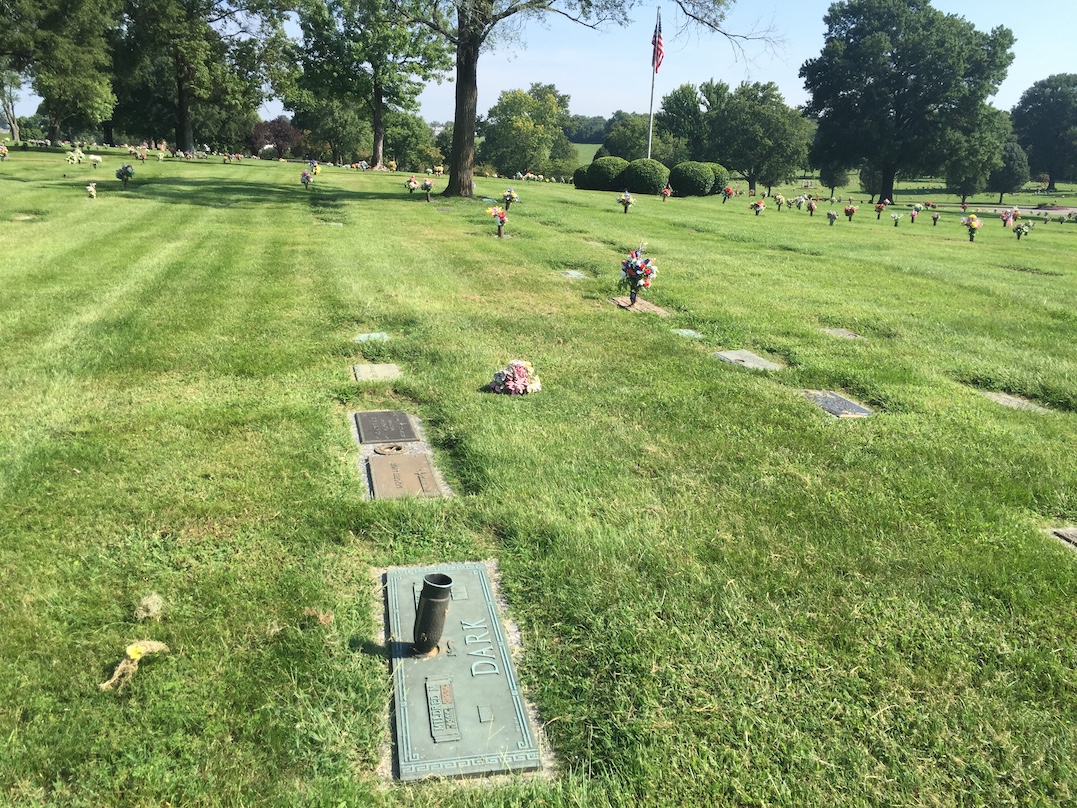 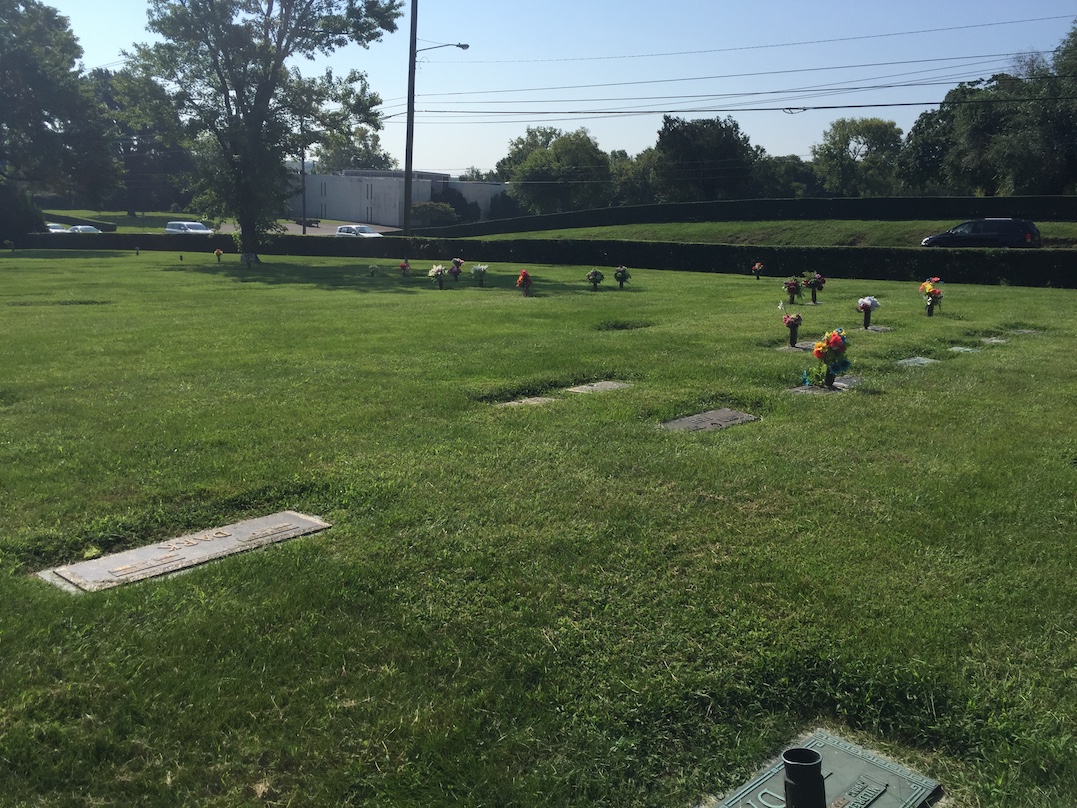 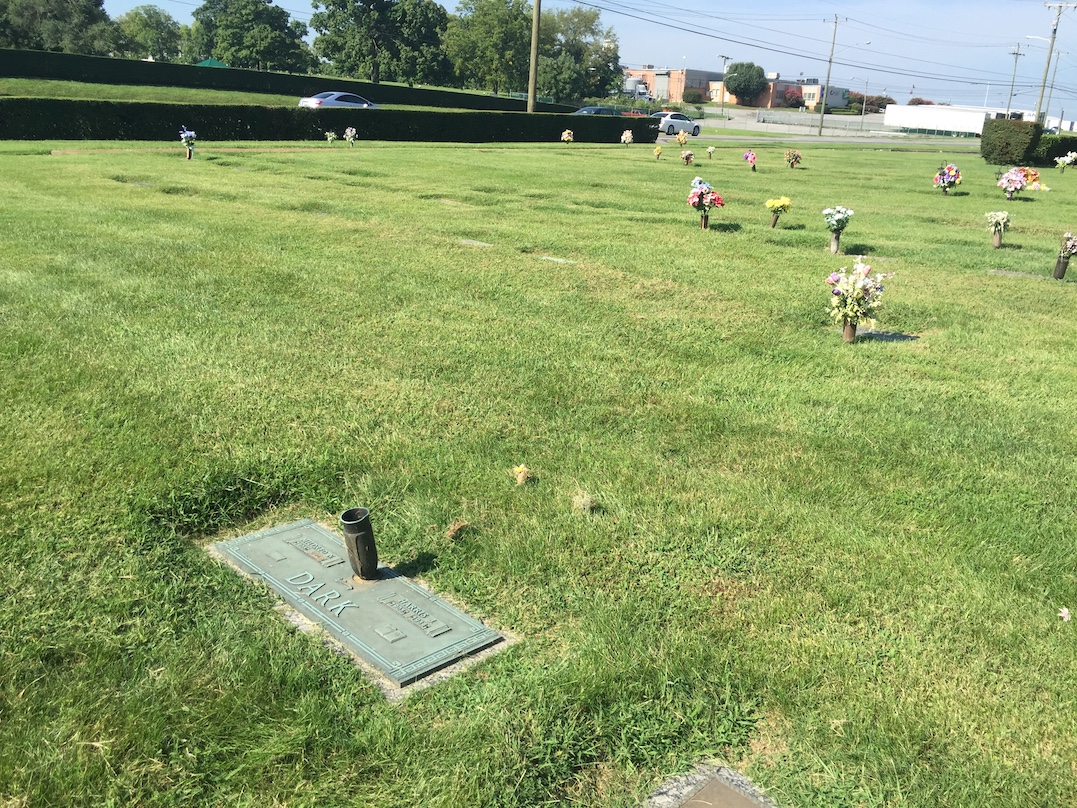 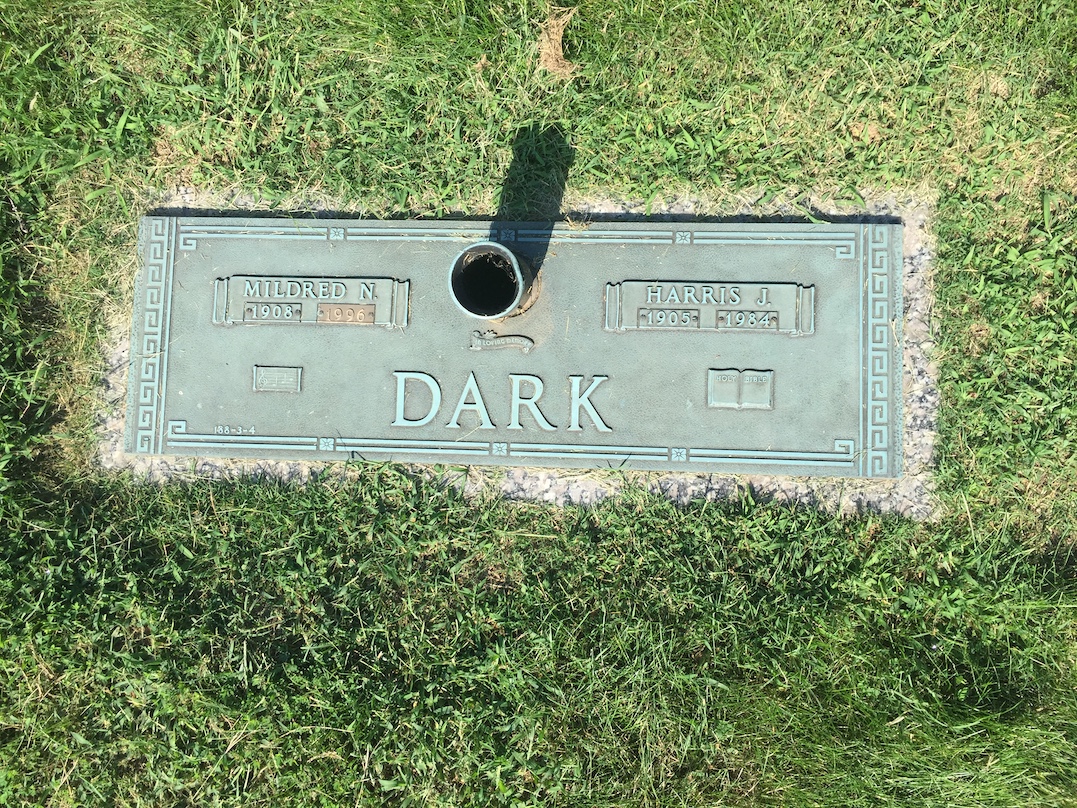 *I first met John Dark and his wife Lucinda when I was preaching for the church of Christ in Buford, Georgia. When they began attending, I recall our talking about his father being a long-time preacher of the gospel in middle-Tennessee. During the course of our time there together, they kindly shared with me copies of the two sermon volumes that his mother had published three years after his father's passing, Gospel Sermons At The Mosque, and Sermons On Church Trends. It was not until the summer of 2016 before I had the change to go by Woodlawn Cemetery in Nashville and find the graves of his parents.