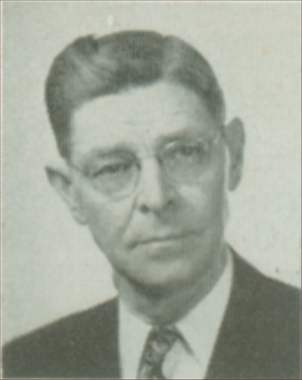 Biographical Sketch On The Life Of A.S. Landiss

Alvin S. Landiss was born January 12, 1892 near Eddyville, Kentucky. He was baptized by James A. Allen in July, 1912. His wife was Lois Street. They had one child. He began preaching in Nashville, Tennessee in 1919. He received his training at David Lipscomb College. He served churches in Port Arthur, Texas from 1926-1931; and Central church in Chattanooga, Tennessee from 1931 until March, 1933. He then moved briefly to 47th St. Church in Rossville in April, 1933. He moved to Jackson, Tennessee in January, 1934, staying until August, 1937. He then moved back to Central, in Chattanooga for a second term in September, 1937 and stayed until 1942, then Broad Street in Cookeville, Tennessee from 1942-1946. He served congregations in Macon, Georgia, Highland church in Jackson, Tennnessee and Kimball, near Jasper, Tennessee, and at Pikeville, Tennessee twice.

He conducted radio preaching and teaching over: WAPO, Chattanooga, Tennessee; WHUB in Cookeville, Tennessee; WTJS in Jackson, Tennessee; and also radio in Macon, Georgia and Hopkinsville, Kentucky. He published two booklets of Gospel Sermons which he preached in meetings at Old Hickory, Tennessee in 1939 and 1940.

A. S. Landiss, 91, of 227 Duane Road, Chattanooga, Tenn., died Friday, April 15. He was buried on April 17 in Chattanogo, He had preached the gospel for 70 years. This very able gospel preacher, who combined barbering for many years with preaching, was baptized by James A. Allen in Montgomery County, Tenn. He is survived by his wife and one daughter Bessie Lyle. Funeral services were conducted in Chattanooga by John Cupp and Paul Hodges.

During this span of 70 years, he preached in the following congregations: Eddyville, Ky.; Indian Mound and Dyer Creek in Tennessee; Pennsylvania Avenue and Eleventh Street, Nashville; Macon, Ga.; Port Arthur, Texas; Central in Chattanooga; Jackson, Tenn.; Broad Street in Cookeville, Tenn.; Pikeville, Tenn.; Kimball, Tenn.; East Chattanooga, and Woodland Heights in Chattanooga. He continued his work in East Chattanooga on a regular monthly basis until the year of his death.

A special dinner was given in his honor in Chattanooga a few years ago in celebration of his attainment of 50 years in preaching. Jimmy Mackin served as mas-ter of ceremonies and many friends of Brother Landiss spoke.

He was a graduate of David Lipscomb College and preached his last sermon at East Chattanooga in March of 1983. He as a native of Lyons County, Ky.

I knew A. S. Landiss during two great gospel meetings in 1940-41 in Old Hickory, Tenn. He continued to be one of my very best friends during the 42-year period since. I never knew a man who thought more of his family, and I never knew one who enjoyed "life in the Lord" more than Brother Landiss. Whether he in the barbershop or in the pulpit, was he was a Christian hour by hour. He had a great deal of fun in life, and many life-long friends. He was a verycapable gospel preacher, and the word of God was in good hands when it was delivered by A. S. Landiss. He has meant much to me as a great friend of the Lord. 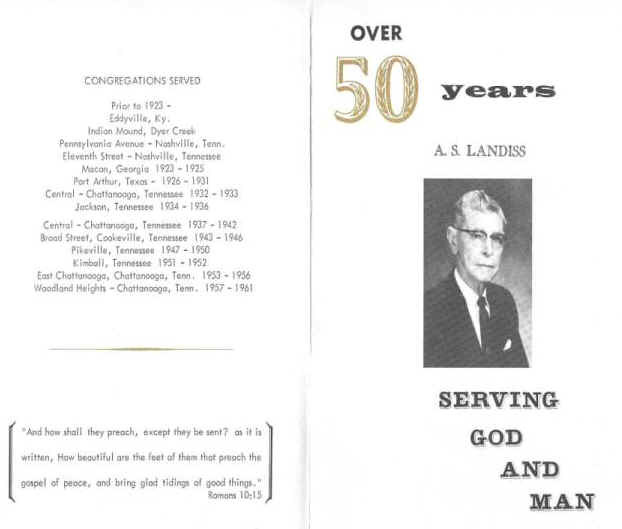 Special Thanks To Houston Bynum For Contributing This Copy Of A Program Held In The Honor Of A.S. Landiss For 50 Years Of Preaching. Speakers At This Event Included: J.M. Mankin, Leslie G. Thomas, S.M. Connally, John Cupp, James Eaton, Jack Barker And Willard Collins.

Directions To The Grave Of A.S. And Lois Landiss

A.S. and Lois Landiss are buried in the Chattanooga Memorial Park Cemetery in Chattanooga, Tennessee. From I-24 take Hwy. 27 North to the Hwy 127 Exit and go east. Road will dead end into Old Hwy. 27 Dayton Rd. Turn left and go to the fourth street on the right Memorial Drive. Cross the railroad track and proceed about a quarter mile and turn left into Chattanooga Memorial Park. When you enter the office will be on the left. Go straight into the park on Memorial Avenue (the main road). The road will begin to ascend up on a hill in an "S" shape. Just follow the road all the way up to the top of the hill. When you get to the top continue traveling and begin looking off in the distance about one o'clock for an arch with steps in the middle that leads up a hill. Make your way to the arch (The Arch is granite, about 8 ft. tall, and has "F & A. M." on the top, with steps going up through the base of the arch. Park and go up the steps heading up this hill. You will come to a stone that looks like a park bench with "O'NEIL" on it. Just behind it will be the grave of A.S. Landiss. If you continue further up the hill just past the Landiss plot, you will see another park concrete bench. Just above it facing north is the grave of Leslie G. Thomas. 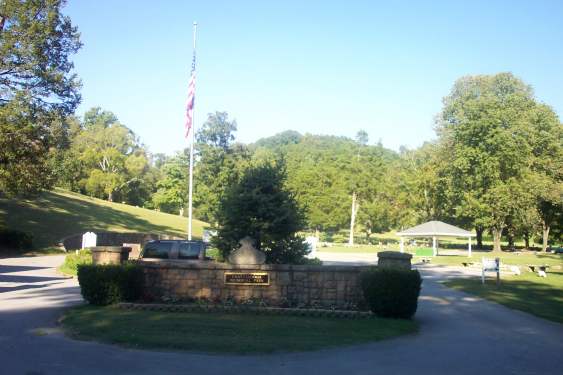 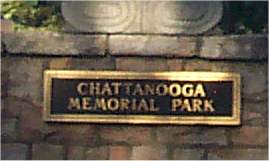 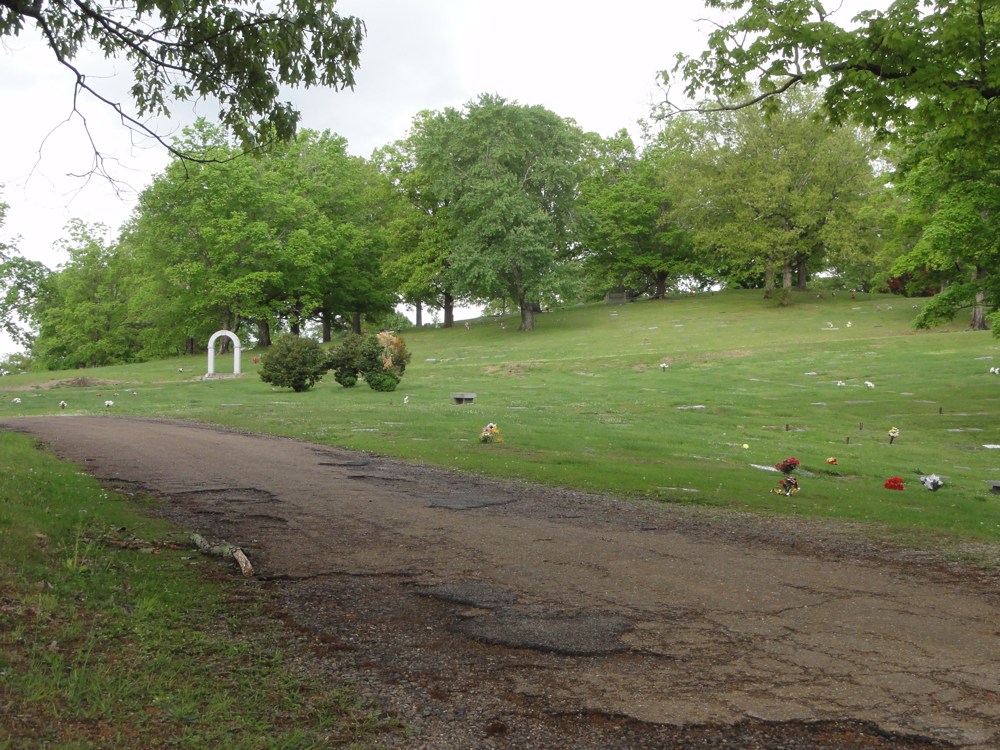 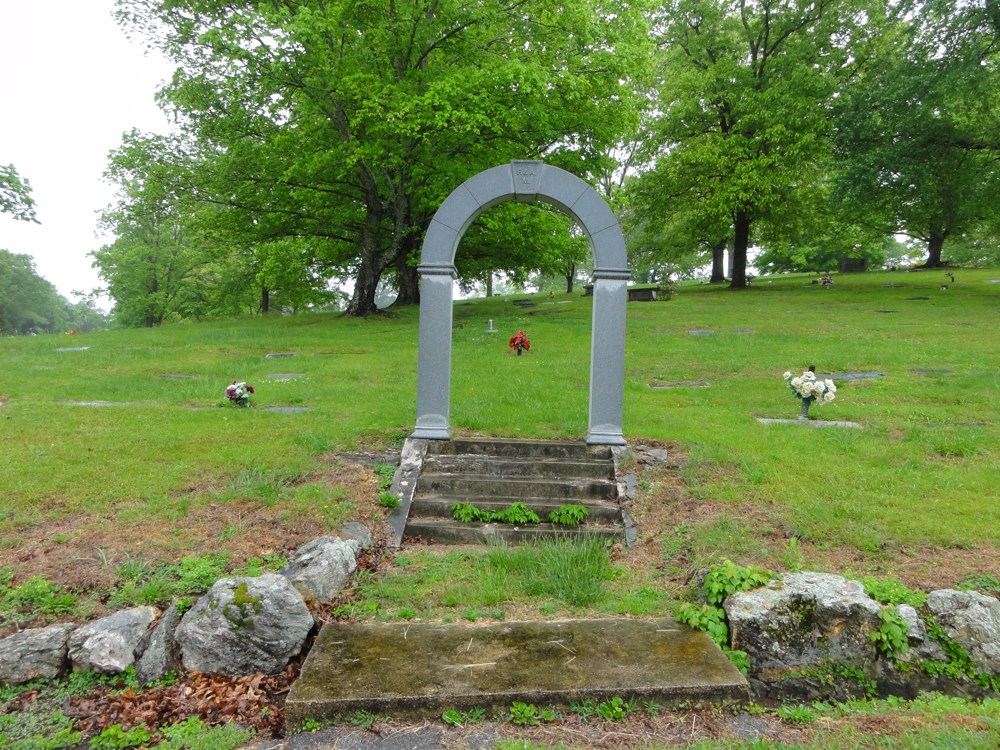 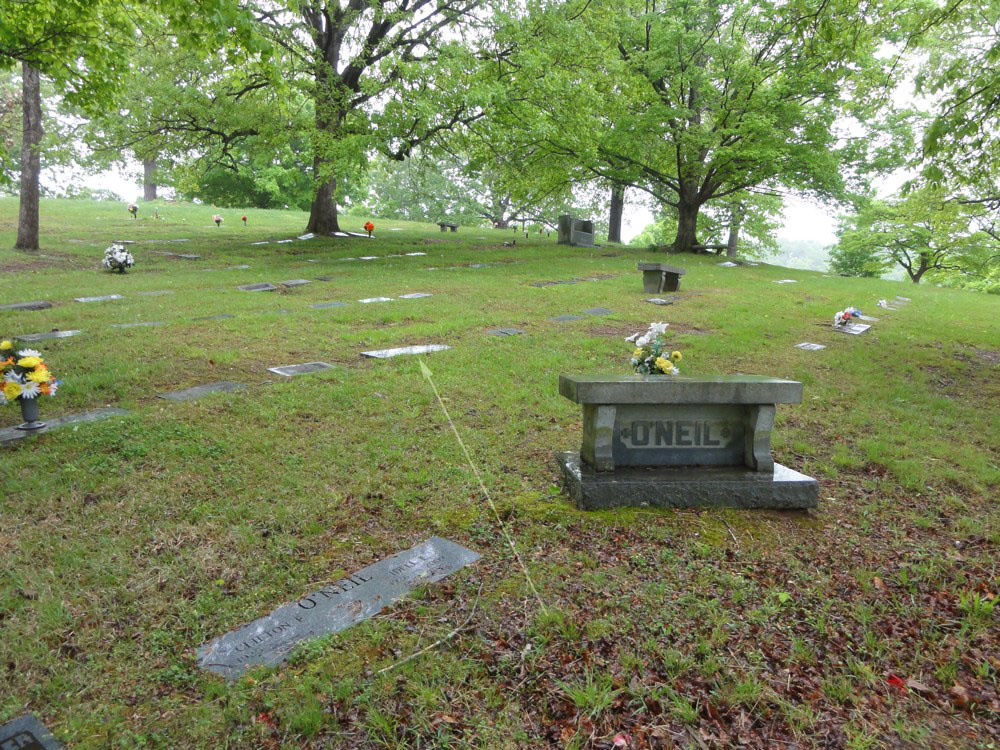 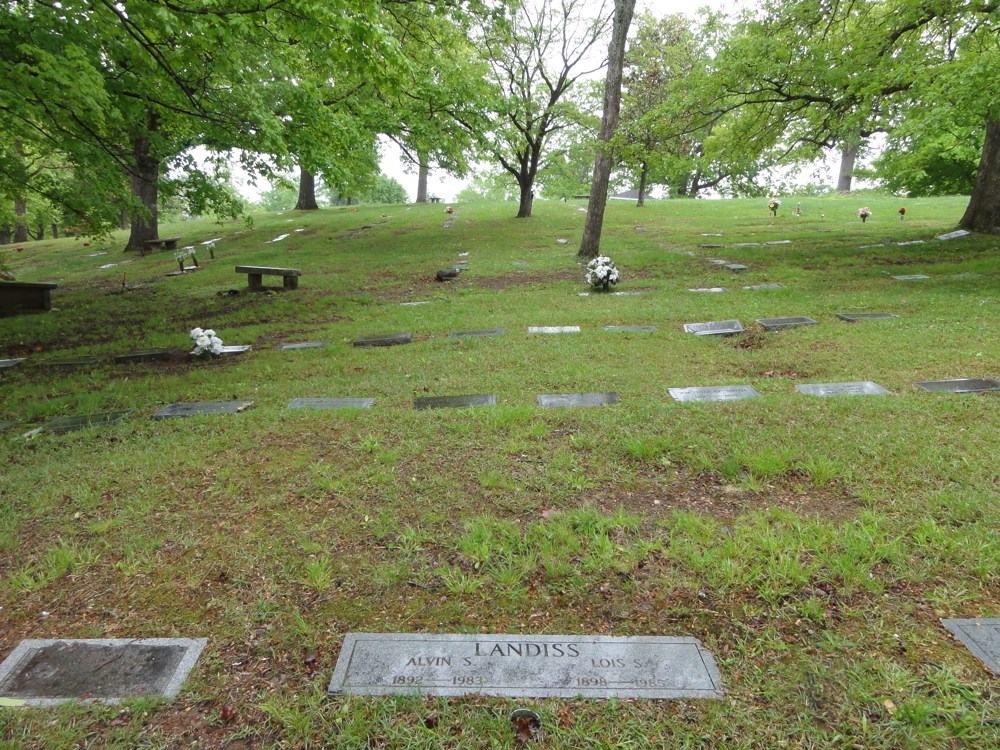 Straight up from Landiss plot, and three graves past tree straight ahead is the grave of Leslie G. Thomas 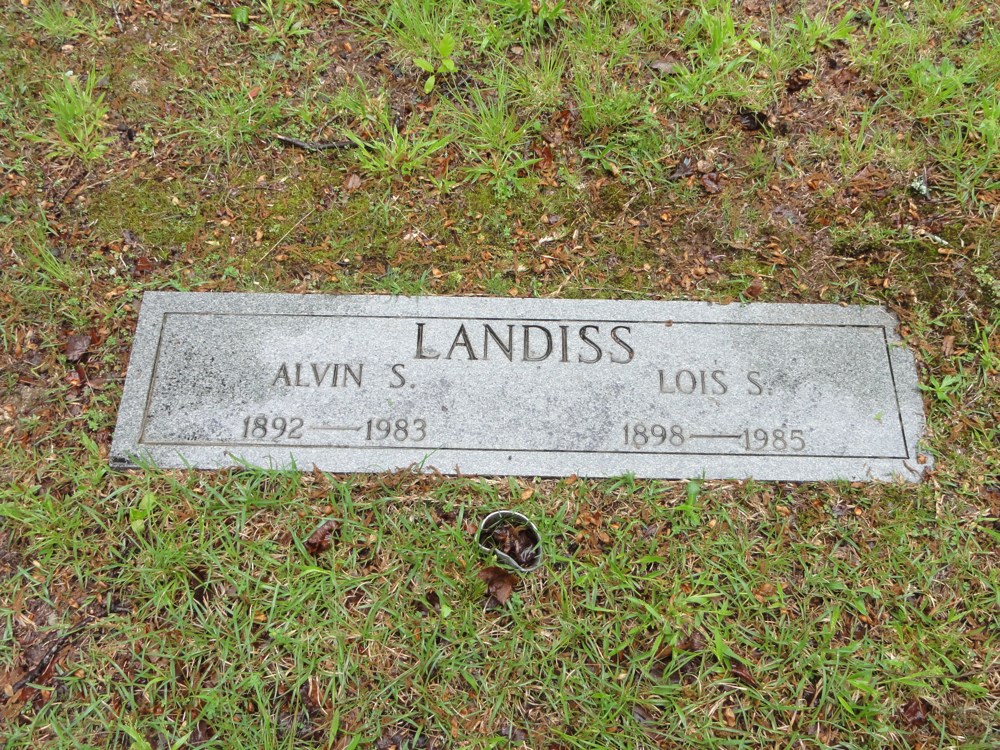