Roderick Rawlins And The Church At Lancaster, Texas

John Mason Rawlings (b.1738-48) came to Massachusetts from London, England in 1770. He was married to Miss Priscilla Blount (1740-1784), of New York. Their sixth of seven children was a son by the name of Roderick born near Bunker Hill, in Massachusetts March 11, 1776. At the time of Roderick's birth the country was enthralled in its battle for independence. This caused the family to move to North Carolina.

Roderick's father was a loyal subject of the King of England and fought for his cause. His own brothers fought for the colonies. When John was captured and imprisoned at Raleigh, North Carolina, the family was forced to drop the "g" from their last name and was simply known as RAWLINS. Being raised by his mother, life was hard. But times would get much more difficult when Roderick's mother passed away when he was only nine years old.

After her death he was passed around to different places, working for a while as a farm hand. Then he moved to Bedford County, Tennessee. There he met and married Sarah King. To this union was born five children: William Jr. (1800-1869) who was a preacher of the gospel; James L. (1802-1868); Angelina, Asa, and Elizabeth. They lived in the area about ten years. Then the family moved to Kentucky for a while, and then in 1811 they moved into Lawrence County, Indiana. While there he fought in the War of 1812. To make things more difficult for the family, Sarah passed away in 1814.

While in Indiana he was elected to the Legislature to represent Monroe and Lawrence counties. He then served as county clerk of Monroe County, and helped to lay out the town that became known as modern day Bloomington.

Within two years of the death of Sarah, Roderick married Mildred "Millie" Parks in 1816. To their union was born seven children: Pleasant King; Lucinda, Lucy; Margaret; Nancy; Tabitha; and R.A. (1833-1910).

While in Illinois the Rawlins family came in contact with Barton W. Stone and the group of Christians he administered to on a regular basis. Roderick was baptized into Christ under Stone's influence. Also, William Rawlins Sr. (1800-1850), the son of James and nephew of Roderick, was particularly influenced by the old Christian preacher. For Stone baptized and ordained William into the ministry as a preacher of the gospel.

When settlers were being drawn to Texas, the Rawlins family was of the first to declare intentions of moving west. On August 30, 1841, President Lamar of the Republic of Texas signed a contract with the W.S. Peters Company allowing 600 families to settle in Texas. The Rawlins family left Greene County, Illinois in September, 1844. They arrived in the area just south of what is now the city of Lancaster, Texas on January 2, 1845. They settled on the north bank of Ten Mile Creek, and there they formed a community known as Hardscrabble. This small community was made up of two rows of log structures. Today the location is easiest found as being located on the north edge of the Edgewood Cemetery on Nokomis Road, Lancaster, Texas.

By the end of the year, Texas was granted statehood in the union, December 29, 1845, becoming the 28th and largest state.

The following year, another man who brought his family to settle in the area was Captain Abram Bledsoe. "A" Bledsoe was born in 1801 in Lancaster, Garrard County, Kentucky. He was known as "Honest A Bledsoe" because when he was born his father, Moses Bledsoe, said "He looks like a

Bledsoe." Therefore most places where his name appears there is no period after "A," simply A Bledsoe. As a young man, Bledsoe settled in Missouri, but in 1846 he purchased a 640 acre tract of land just west of what is now Lancaster, Texas. He moved his family there and very soon came under the influences of the Rawlins family. His daughter Virginia married Captain R.A. Rawlins, the youngest son of Roderick and Millie Rawlins.

Not only was this a fresh new country to be settled, but it was the first opportunity for New Testament Christianity to be introduced to this new part of the country. And introduced it was, for in a short time the church of Christ was established there.

On July 5th, 1846 a group of eleven men and three women met together, and organized the first Christian Church in the Southern part of Dallas County Texas - The record, still preserved is as follows: "We whose names are herewith subscribed, do mutually agree with each other to associate together as a Church of Christ taking the Scripture alone for our rule of faith and practice" - Signed: - Roderick Rawlins; Wm. F. Newton; William Rawlins, Jr.; Zebedee Heath; W.H. Newton; Joseph P. Rose; William Rawlins, Sr.; H.M. Rawlins; Milly Rawlins; Lucinda Kellar; Malinda Rawlins; Peter Hall; A Bledsoe; J.M. Rawlins.

Three of this group: William Rawlins Sr.; J.M. Rawlins, and Roderick's son, William Rawlins, Jr. were ministers of the gospel. Though Roderick preached from time to time, the preaching for the most part was left to the other men in the group.

The years in the new state of Texas were short for Roderick Rawlins. He passed from this life April 27, 1848. His mortal remains were laid to rest in the little cemetery that sat on his property known as Edgewood Cemetery.

The history of the little church and work at Lancaster does not rest with the passing of Roderick Rawlins, for it was still in its infancy. With more and more people coming to settle in the newly formed town of Lancaster, the church grew with it. Not long after his death, Abram Bledsoe purchased a tract of land from Millie and staked out the little township of Lancaster. He laid out the town square and adjacent streets just like his hometown in Lancaster, Kentucky, which had borrowed its pattern from Independence Square in Philadelphia, Pennsylvania. In 1853, he began auctioning blocks of land off, and with it the growth of this new south Dallas County town.

During 1847, the record states, twenty-one members were added to the church (the names given) and from 1848 to 1850 eight more were enrolled.

From 1850 to 1880 no church record was preserved, though several old letters of 1853 to 1860 speak of "the church" and of those who "were added to the church," also of the "meeting house that burned." Other letters speak of "Father" Billy Rawlins, and Brother Polly as preaching for them.

In 1880 (November 18th) Brother H.H. Paugburn of Hutchins assisted in reorganizing the church - a lot (the present church site) was bought from Mr. Myron Everts (father of Arthur A. Everts) and a frame building erected in 1887. It was dedicated by W.C. Deinmitt - The building burned in February 1918, while Brother Cephar Shelburne was the minister. The present brick church was built in the spring of 1919 and dedicated by Brother Shelburne.

Directions To The Grave Of Roderick Rawlins 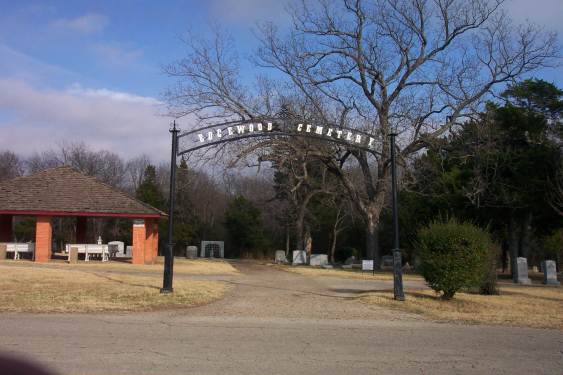 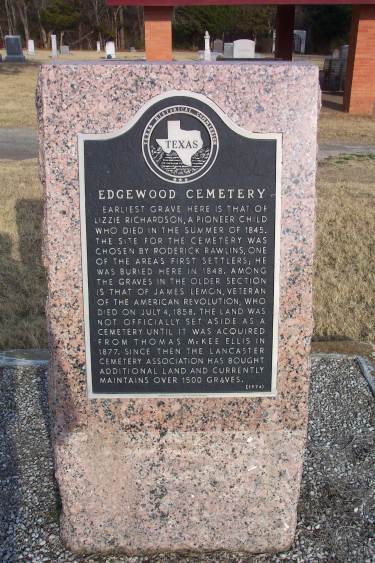 Edgewood Cemetery
Earliest Grave Here Is That Of
Lizzie Richardson, A Pioneer Child
Who Died In The Summer Of 1845.
The Site For The Cemetery Was
Chosen By Roderick Rawlins, One
Of The Area's First Settlers, He
Was Buried Here In 1848. Among
The Graves In The Older Section
Is That Of James Lemon, Veteran
Of The American Revolution, Who
Died On July 4, 1858. The Land Was
Not Officially Set Aside As A
Cemetery Until It Was Acquired
From Thomas McKee Ellis IN
1877. Since Then The Lancaster
Cemetery Association Has Bought
Additional Land And Currently
Maintains Over 1500 Graves 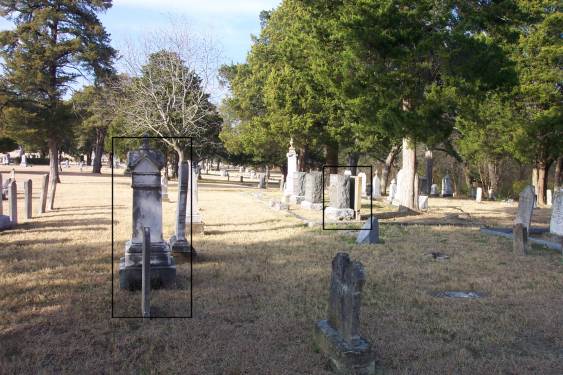 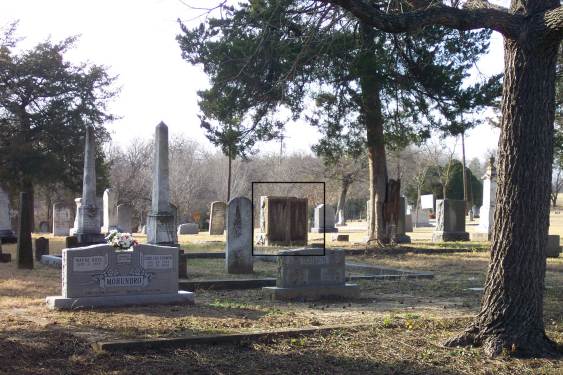 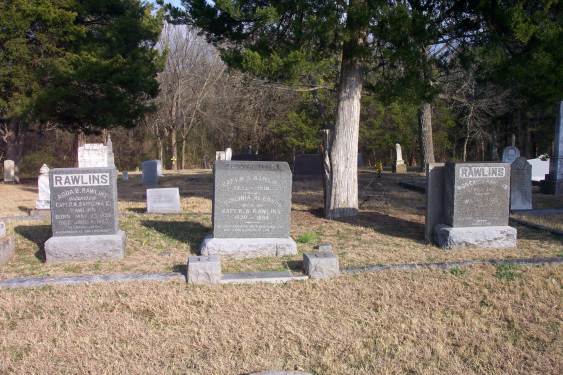 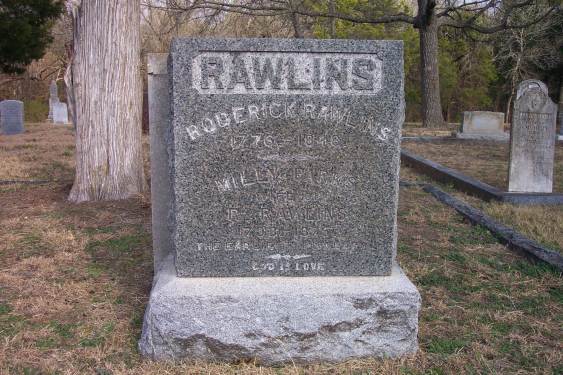 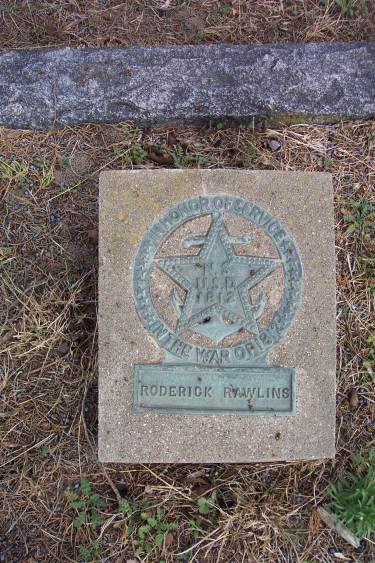 Honor Of Service In The War Of 1812
Roderick Rawlins