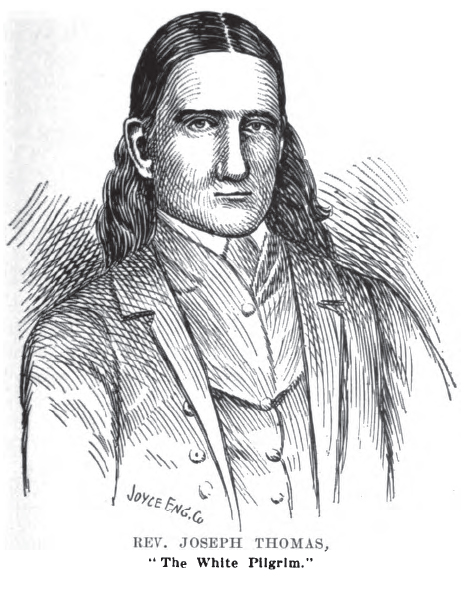 Rev. Joseph Thomas was born near Hawfields (Trollinger's bridge on Haw river), in Orange (now Alamance) county, North Carolina, March 7, 1791, and died April 9, 1835. At the age of seven he was separated from his father and mother, and lived under a strange and inhospitable roof with the pleasing expectation of going to school. But after two years an older brother, who lived in Grayson county, Virginia, took him to his home and engaged him to a school adjacent to his abode. In 1803, he attended school in Giles county, kept by Mr. R. Curry, an excellent teacher.

In 1806, having gone to his home in North Carolina, he was deeply convicted of sin at a camp-meeting under the preaching of William Guirey. He began to pray in private, and after a year, at the age of sixteen, he received the evidence of a full pardon. Now as in an instant, he says, it was manifest to me that I was chosen and appointed to preach the gospel far and near, and that I should have to bear much persecution and tribulation for the sake of Jesus. His first thought was to connect himself with the Methodists, then next with the Freewill Baptists, and then with the Presbyterians; but as he did not receive encouragement according to his notion, he visited Elder Benjamin Rainey who explained to him the doctrines and government of the Christians. He says, So I became a member of that church in the 17th year of my age, 1807. I then began to exercise my gift in speaking among the brethren. After this the church gave me a recommendation to the great meeting in Raleigh, North Carolina. On the 19th day of October, 1807, he set out for Raleigh where the General Meeting or Conference was to be held, beginning on Friday, October 22nd. On his way he fell in with Elders M. Debruler and John Hayes. At this Conference he was baptized by Rev. James O'Kelly, and was licensed to preach, although only a little over sixteen years of age. His first labors were in Virginia.

In those days it was customary for the preachers to travel two and two, so Rev. Joseph Thomas traveled first with Elder J. Warren through Mecklenburg, Lunenburg, Prince George, Prince Edward, Queen Ann, Henrico, Chesterfield, and Amelia counties. But the relations between Elder Warren and himself not being pleasant, he left him and began ro labor with Elder Thomas Reeves in Surry county, and counties ro the eastward.

In 1809, he attended the meeting at Shiloh in Halifax county, Virginia, and from there he visited his home near Hawfields. From there he went to Apple's church in Guilford county, North Carolina, where he met with Rev. James O'Kelly. They both preached, and Mr. O'Kelly administered the Lord's Supper. This was June 4th. By the middle of July he had made a visit ro Grayson county, Virginia, and returned ro his relatives on Haw river. He next directed his course eastward and visited Rev. Rice Haggard and Old Lebanon. On April 10th, at Chaney chapel he attended a sacramental meeting of the Republican Methodists.

Young Thomas had made an engagement to travel with Elder Haggard through the western country, but was prevented from doing so by sickness. They were to meet at his brother's on New river, Grayson county, Virginia, on first day of June, 1810. Joseph Thomas 'W8S believed to be in a comsumpted state. After he had sufficiently recovered from spitting of blood, and cough, he directed his course southward into South Carolina, and returned by way of Fayetteville, Newbern, and Raleigh. And he went on through Wake into Warren county. At Liberty meeting house he met with Rev. James O'Kelly again; they crossed over Roanoke river into Virginia, and traveled several days together, preaching by day and by night to congregations generally large and attentive.

In 1811, having made a tour through the West, he returned by way of Philadelphia, was re-baptized by immersion, and on the 9th of July, in the courthouse he I was ordained by the laying on of the hands of two regularly ordained Elders. This was about four years after he had been licensed at the Conference at Raleigh, North Carolina, and the reader will naturally inquire,— Who baptized him? Who ordained him? In his autobiography, he gave the facts only. But elsewhere it is said, After a discourse on the occasion by E. Smith, Brother Thomas kneeled down on an elevated place where the people could see and hear. Elders E. Smith, and J. Gray, with Brother J. Hunter kneeled with him, and laid their hands on him. Brother Gray prayed. This being all done, to ordain according to the New Testament: they arose and the brethren, with many of the congregation, joined in singing the eighth hymn, What contradictions do we meet, etc. They gave him the right hand of fellowship. After preaching in the vicinity of Philadelphia. and eastward a few months, he went thence to the General Meeting held in Caroline county, Virginia, first Friday in October. At this place he met with William Guirey. After Conference closed, he went to the western part of the state.

He was married to Christiana. Rittenour, daughter of Michael Rittenour, by Elder J. Foster of Winchester, Virginia, on Suhday, April 5, 1812. He purchased a home and settled in Orange (Alamance) county, North Carolina, but the following year disposed of his place and purchased a home in Kernstown, Frederick county, Virginia. In 1814, he sold his possessions, put off his “fashionable clothing and dressed agreeably to the impressions of his mind in white—whence his name the “White Pilgrim.” He published his “Pilgrim's Hymn Book in 1815.

His autobiography closed with 1817, while he was living in the Valley of Virginia. In 1820, he made a tour through North Carolina and Virginia. Soon after he moved with his family to Madison county, Ohio. In 1835, he made a tour of the Eastern States, and while in New York city, he is supposed to have taken small-pox by walking through the streets in some infected district though not exposed to it. He died at the home of Elder J. S. Thompson, Johnsonsburg, New Jersey.

In a Eulogy before the North Carolina. Conference at Moore Union, Moore county, Rev. H. B. Hayes says:

One great leading object, Elder Thomas had in view, in the commencement of his ministry, was the conversion of souls. He saw that the world lay in wickedness, and numbers were heedlessly pursuing the road to death. He learnt in the Holy Scriptures that Christ had died for the sins of the world, and was willing to save an that would repent and believe in him. He saw a fullness in Jesus to save the vilest sinner. Having been delivered from & state of guilt and condemnation himself, and drunk of the waters of life and experienced the Saviour's love shed abroad in his own soul, it was his earnest desire that every sinner might experience and feel the same.—Thus he felt fire, as it were, shut up in his bones, and was constrained to cry aloud and spare not. Though he had to wade through deep waters and fiery trials, yet he frequently pursued his course and hundreds were converted through the instrumentality of his labors. Elder Thomas's manner of preaching was peculiar to himself. His discourses were delivered with the sweetest strains of eloquence which fell upon the ear with delight, and thrilled the soul of his hearers; your humble speaker will not forget the melody of that voice, which is now still in death.

And another says, A few weeks ago this strong healthy man in the prime of life; this bold invincible servant of the living God—this profound logician and eloquent orator, was by our side; our warm friend and able counselor. A short time ago, thousands of smiling Christians were crowding the chapels in different parts of the country, to hang upon his melting stains. But alas! his work is done! his earthly course is finished! He will never more weep over perishing sinners, or warn them to :flee the wrath to come—he will never again stand by the side of the poor mourner, to pour the balm of consolation into the afflicted bosom, nor hold out the hand of friendship to cheer and encourage the humble disciples whose faces are Zionward. No, that voice which imparted such animation and joy, is silent; that hand which was given in token of Christian fellowship is now cold in death.

An excellent poem, dedicated to his memory by an unknown “MERITI AMICUS begins thus:—
Farewell to thee, my brother—thou art gone to be at rest—
The Master's summons calleth thee to mansions of the blest;
To join with the redeemed ones, and with them ever stand,
In spotless robes around God's throne—a radient holy band.

Rev. John Ellis, in addition to the following hymn composed by him on the occasion of a visit to his grave, wrote also a sketch of his life :—
I came to the spot where the white pilgrim lay,
And pensively stood by his tomb;
When in a low whisper I heard something say—
How sweetly I sleep here alone.

The tempest may howl, and the loud thunders roll,
And gathering storms may arise;
Yet calm are my feelings, at rest is my soul,
The tears are all wiped from my eyes.

The cause of my master propelled me from home,
I bade my companion farewell,
I left my sweet children, who for me now mourn,
In far distant regions to dwell.

I wandered an exile and stranger below
To publish salvation abroad;
The trump of the gospel endeavored to blow,
Inviting poor sinners to God.

But when among strangers, and far from my home
No kindred or relative nigh,
I met the contagion and sunk in the tomb—
My spirit to mansions on high.

O tell me companion and children most dear
To weep not for Joseph, though gone;
The same hand that led me through scenes dark and drear,
Has kindly conducted me home.

-Lives Of Christian Ministers, Peter Jefferson Kernodle, pages 80-85
Note: Versions of this song were recorded by modern day singers. Bob Dylan, recorded it in Malibu, CA, May 1993; released on the album, "World Gone Wrong," Oct 1993. Doc Watson recorded it on the album "The Doc Watson Family." The CD was re-issued in 1990.

Directions To The Grave of Joseph Thomas

Joseph Thomas is buried in the Johnsonburg Christian Church Cemetery in Johnsonburg, New Jersey. Heading west of Newark on I-280, pick up I-80 west to Exit 19. Turn right and bear to the left as the road divides. Turn left on the Johnsonburg Road/Co. Rd. 612. Go about 4 miles. Just past Co. Rd. 519, and the cemetery will be on the left. Head into the cemetery, and look for the obelisk in the middle. It is the grave of Joseph Thomas. 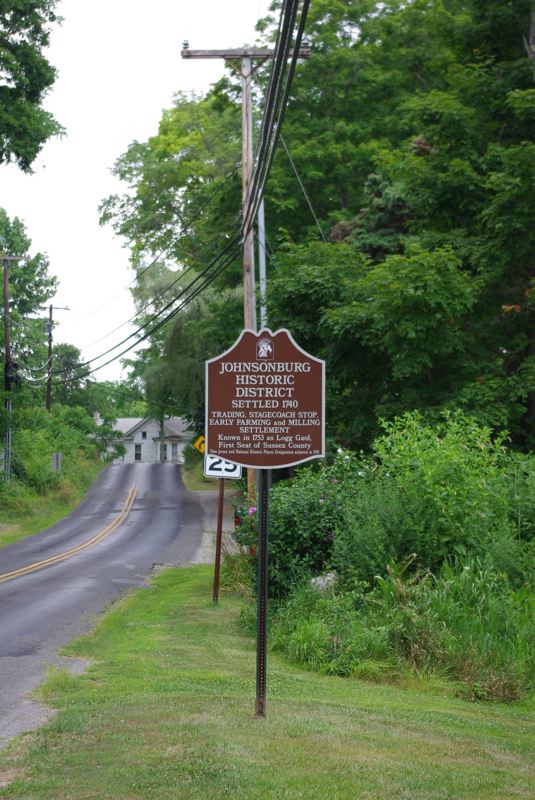 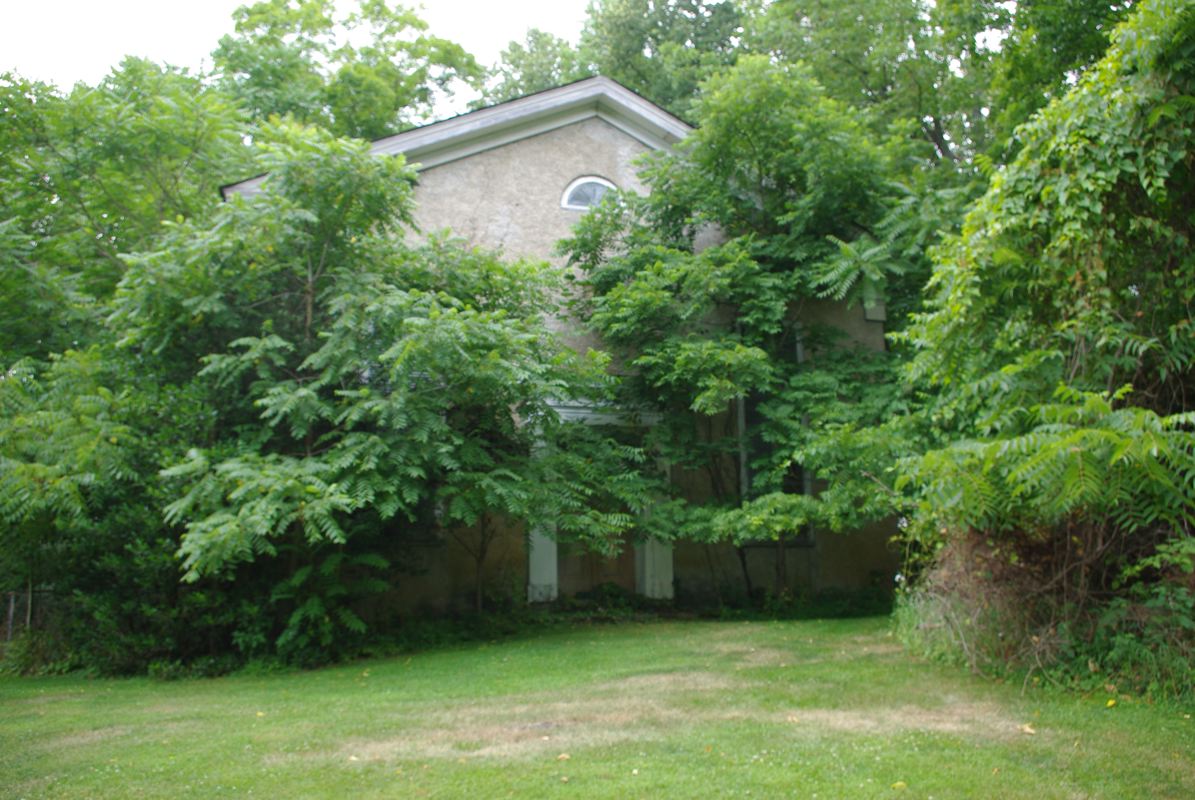 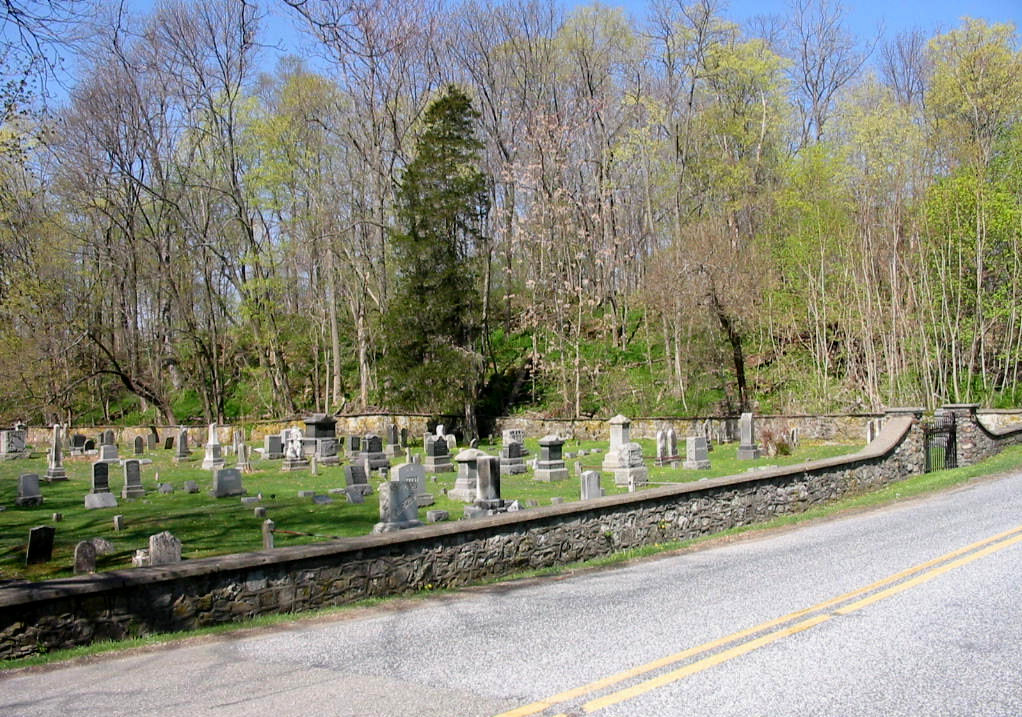 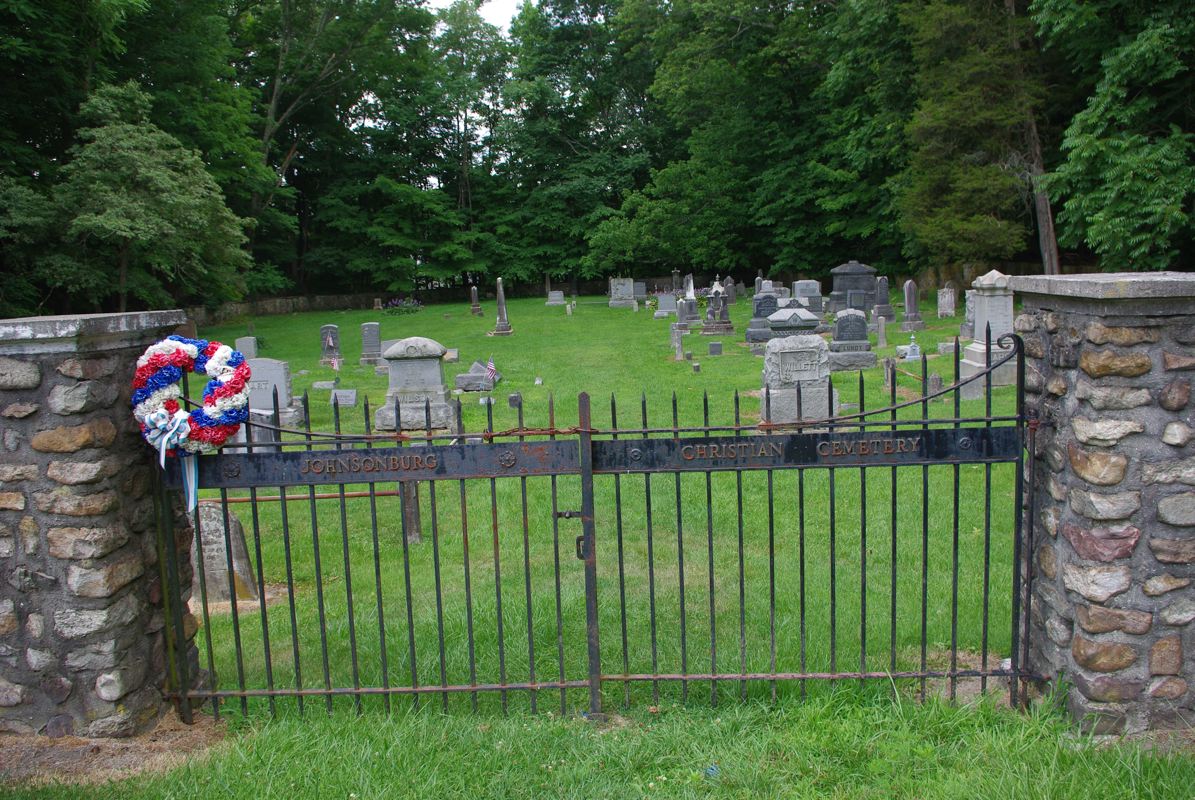 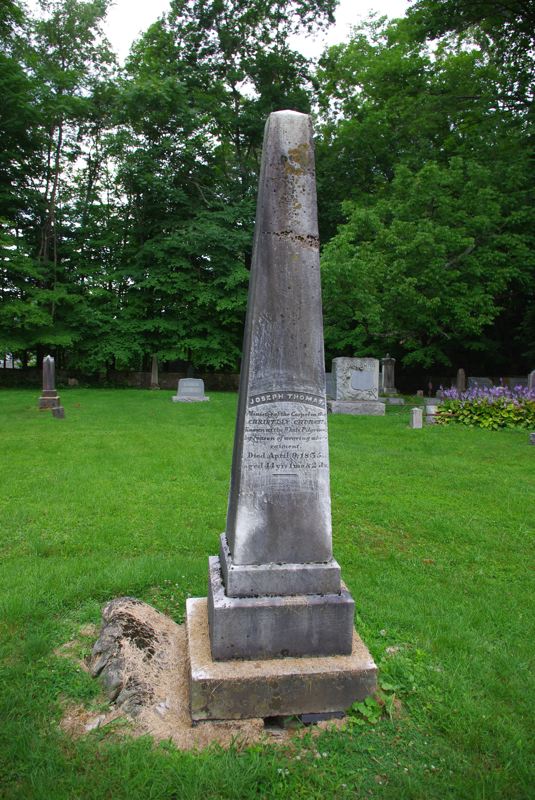 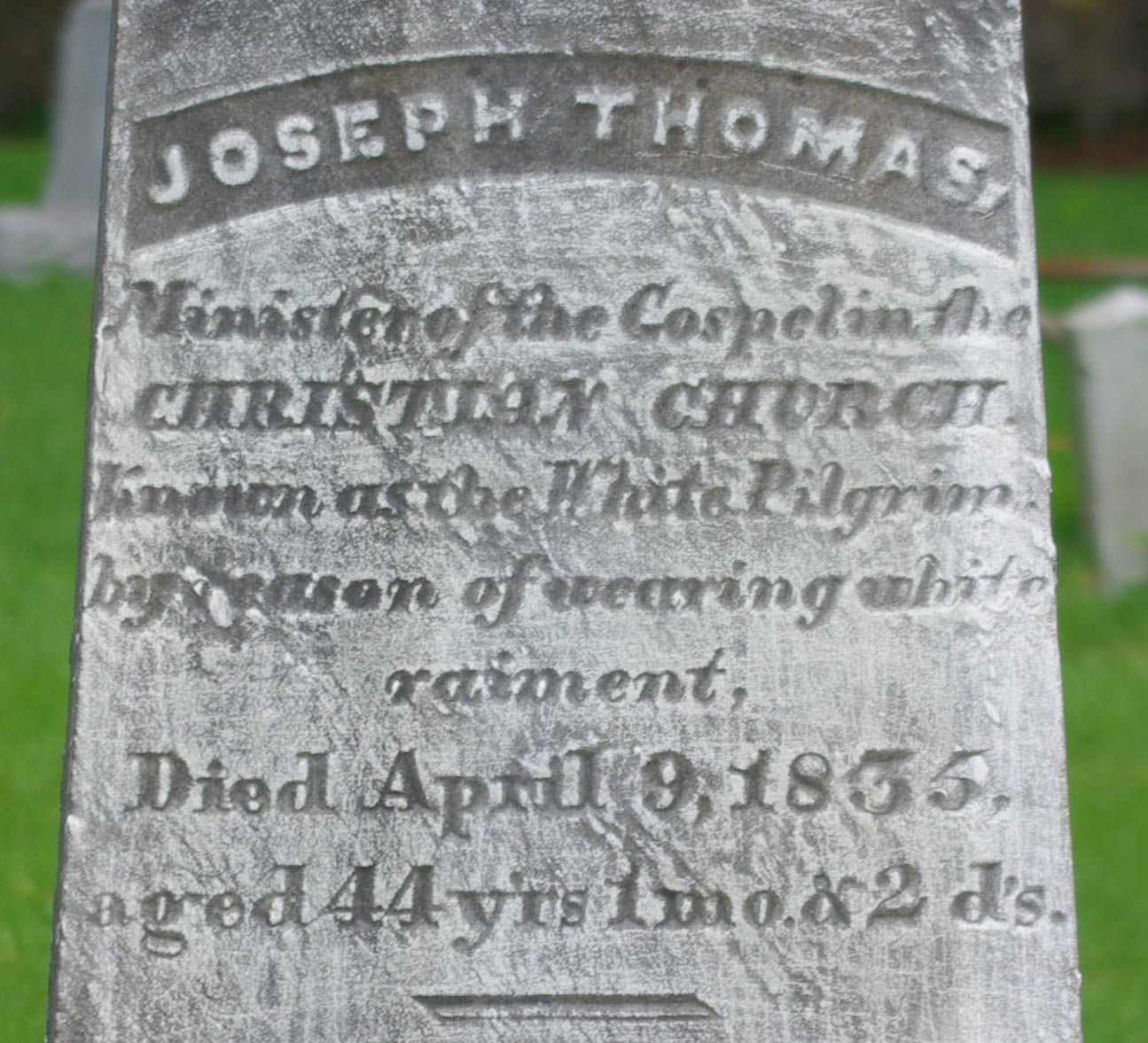 Photos Taken by C. Wayne Kilpatrick, July 20, 2012
Webpage produced November 24, 2012
Courtesy of Scott Harp
www.TheRestorationMovement.com
Special thanks to C. Wayne Kilpatrick for providing the photos of the grave of the White Pilgrim, Joseph Thomas. While on vacation in the NE United States, he and his wife were traveling in the area where Thomas is buried.