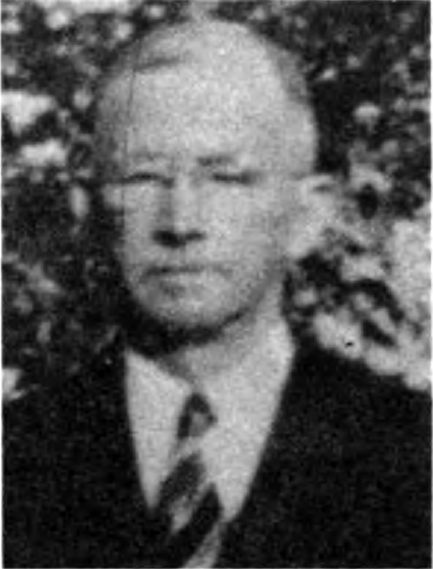 John Carlisle Carman was another of those great men who blazed many trails in establishing The Lord’s work on the frontier in the early days of this century, especially in western Oklahoma. He was another of those “fulltime” preachers who worked some on the side to support their families.

He was born in Mayfield, Kentucky, December 3, 1886, of Charles William and Martha Ellen (Angel) Carman, who were tobacco farmers. His parents were Christians and he obeyed the gospel at the age of fourteen, being baptized by A.O. Colley. The family moved to San Angelo, Texas where he attended the public schools and began preaching at the age of eighteen. Following his public school work, he enrolled in the San Angelo Business College, which was owned and operated by the late Jesse P. Sewell. A lifetime friendship between the two developed, and of course Brother Sewell was a great influence for good in his life. The family has a letter Brother Sewell wrote him on Dec. 2, 1910 in which he spoke of personal things, and then of Brother Carman’s preaching work. He expressed satisfaction that Brother Carman wanted to stay in one place, saying: “. . .you can accomplish so much more good by cultivating one field well, than by just touching a large number.” He continued, “. . .you are casting your bread on the waters, stay with it, love the people, lead them to Christ and train them for heaven, marry their young, bury their dead. Be with them in joy and sorrow, always trying to bless them. . ..” This pretty well sums up the kind of a life he did live.

His preaching work took him into New Mexico, and while preaching in Tucumcari, he met and married Miss Mabel May Rogers on April 21, 1909, in Ogle, N.M. She had moved there with her parents from Kiowa, Choctaw Nation, Indian Territory, now Oklahoma. Mabel was a true helpmate as a wife and a good mother to their four sons. She is still living (Aug. ’76), but has been an invalid for some years. The four sons are: Jesse, G.W., W.B. (Bill), and Johnny.

Soon after their marriage they moved to Hansford in Hansford county, Texas and filed on some land. Of course he began preaching wherever there was an opportunity. He said that it was more difficult to feed his “buggy” horse (money-wise) than to buy the high priced gasoline of later years, and a lot more inconvenient. In 1911 they disposed of the claim and moved by covered wagon to Texola in Beckham county, Oklahoma. Their first son had been born in Hansford, and the other three were born in Beckham county. While living in Texola he preached for the church there, in Erick and in Elk City. (The Rock Island train operated between these places.) We do not have complete information about how his time was divided, but we do have a newspaper clipping from 1912 in which the services of the Texola church were announced, and it showed that he preached there each first and third Sunday at 11 a.m. and 7:30 p.m.

A preacher’s life under these circumstances was never easy, for they had to support their families with work other than their preaching, and they had to STUDY, STUDY, STUDY — no wonder many of their children speak of them “burning the midnight oil.” “Study to show thyself approved unto God. . .” was more than just a timely text on which they may have spoken at times. While in Texola he owned a house with twenty acres of land. He also rented some more land and farmed “on the shares,” worked as a farm laborer, a cotton picker, sold insurance, and owned and operated the newspaper and printing shop, all in order to be able to preach the gospel. After some six or seven years in Texola, he moved to Mangum, where he preached for about three years, then to Elk City about 1920 for the rest of his life. In all these years, in addition to his regular appointments, he preached in school houses on Sunday afternoon — held many meetings, and while living in Greer county, often preached to the prisoners in the nearby State Reformatory at Granite. He was able to lead some of these to The Lord. He did “local work” with the Elk City church for several years. The church then met in a small frame house at 100 North Washington Street. While he was there they bought the Methodist building at the corner of Second and Adams, where they still meet in a good building erected in recent years. The Elk City church began to grow while he was there, and for many years has been one of the very best congregations of the Lord’s people in western Oklahoma. Brother Carman did not live long enough to worship in the new building they now use, but Brother A.V. Isbell, who was then preaching there, often took him by to watch the construction. He would have loved the Elk City School of Preaching, for such work is always dear to the heart of any dedicated man. In the early years at Elk City he began operating a store catering to the school children from across the street. With this store he was able to support his family, and thus pay for his preaching to the end of his life. (That store is still operated by the Carman family.) After his “local work” in Elk City ended, he literally preached all over that section, and perhaps there was not a church within a reasonable distance where he did not do some work. The Cause all over the area will always be indebted to him for his good work in those years. (I remember the first time I ever heard him was in a meeting with the North Burns church, near present Burns Flat.) Perhaps about 1928 or 1930 he learned that a few families were meeting in the court house in Sayre, county seat of Beckham county. (The Church there had gone “disgressive” some years before this.) He met with them one Sunday and asked if they needed a preacher. They did, but said they could not support one. He told them he was not seeking support, for he did have the little school store. And so with such an understanding he began working with them. The Watts, Inman, and Stovall families were among the few then attending, and they were not wealthy people. Opposition in the town was bitter, especially from the “digressives.” In time they were able to get a small building, and a little later with help from Elk City, and other places, they were able to build a nice brick building across the street from their present location. (Some who find fault with such efforts usually do not know what they are talking about, for these efforts represented real sacrifices.) As they grew, they tried to support him, but he would not accept it. They did give him a gold watch which he prized more than any money they could have paid him. The Sayre work was built upon a good foundation, and for many years has been one of the better churches in western Oklahoma. Finally they were able to get a full time man when J.D. Pinkerton came, and Brother Carman gladly went elsewhere to help a place that could not support a preacher. It was my privilege to be the second full time man  at Sayre, and Brother Carman was loved and respected and often called back to Sayre for various services. After the Sayre work, he helped establish The Cause in Canute, from there he went to Hammon, preaching there until the doctor told him his work was finished.

In 1942, after his health had begun to fail, he wrote an article which began: “What is this I am approaching? Is it the end? Nay, rather let me have faith to believe it is the beginning for me of a new life . . . a life more abundant. More abundant because. . .”

He now knows the answers to the questions he raised. He really “knew” them then by faith, but now that faith has been turned to sight, for after a number of years of failing health, The Lord called him to that “life more abundant” on October 5, 1948, at the comparatively young age of sixty-one years. His body sleeps at Elk City where his influence will continue to bless on and on. He was a good man, a good preacher, and one of the builders of God’s kingdom. All honor to such ones. 90 John C. Carman1886-1948

-Loyd L. Smith, Gospel Preachers of Yesteryear, pages 87-90, First appeared in August, 1976 in Christian Worker. Note: This is a timed piece. Some mentioned as living are now deceased.

Directions To The Grave of John C. Carman

John Carlisle Carman is buried in Elk City, Oklahoma in the Fair Lawn Cemetery. Elk City lies west of Oklahoma City about 110 miles. Travel on I-40 to Exit 38, (Hwy. 6, S. Main St.) and turn north. Go through town, the road will become N. Main St. The road will dead end into W. Country Club Blvd. Turn left on W. Country Club Blvd. Go one block, and turn right on N. Washington Ave. (There was a funeral home on the corner when we visited in October, 2004). Travel out N. Washington Ave. until you see the cemetery on your left and right. Carman is on the left side of the road up from the cemetery office. Enter in front of the office and bear to the left. Go until you can fork to the left of right. Take the left fork and head around until you get past a section of trees, and begin looking in the section to your right. The CARMAN section will be in just two or three rows. See Cemetery Map Location Here. The preachers buried in this cemetery include: Dr. W.W. Brewer, John C. Carman, M.A. Mansur, and Albert C. Trent. Carman Plot Info: Section West, Block 7, Lot 60, Space 3 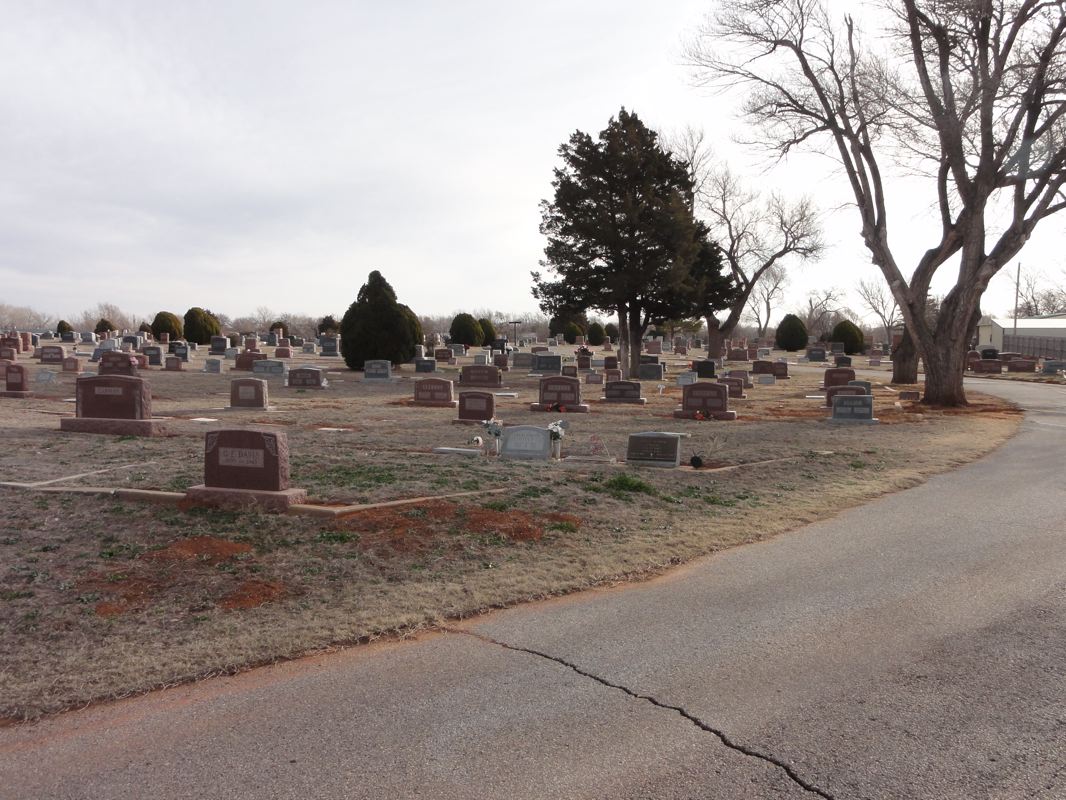 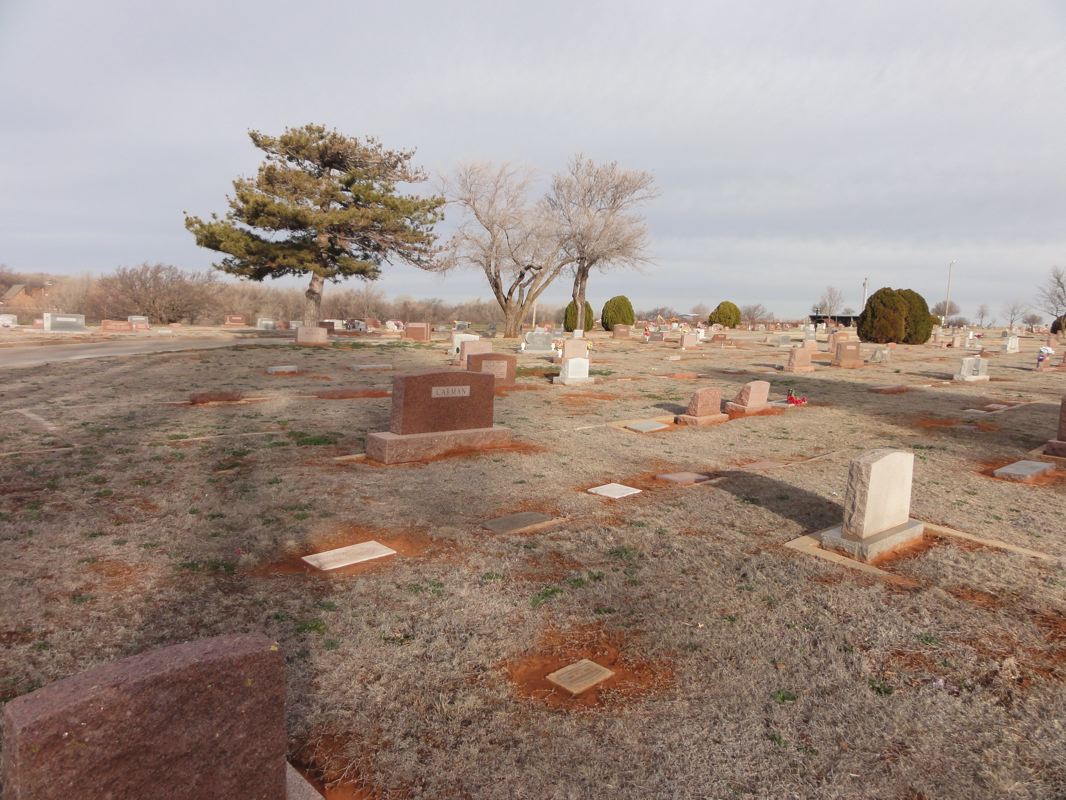 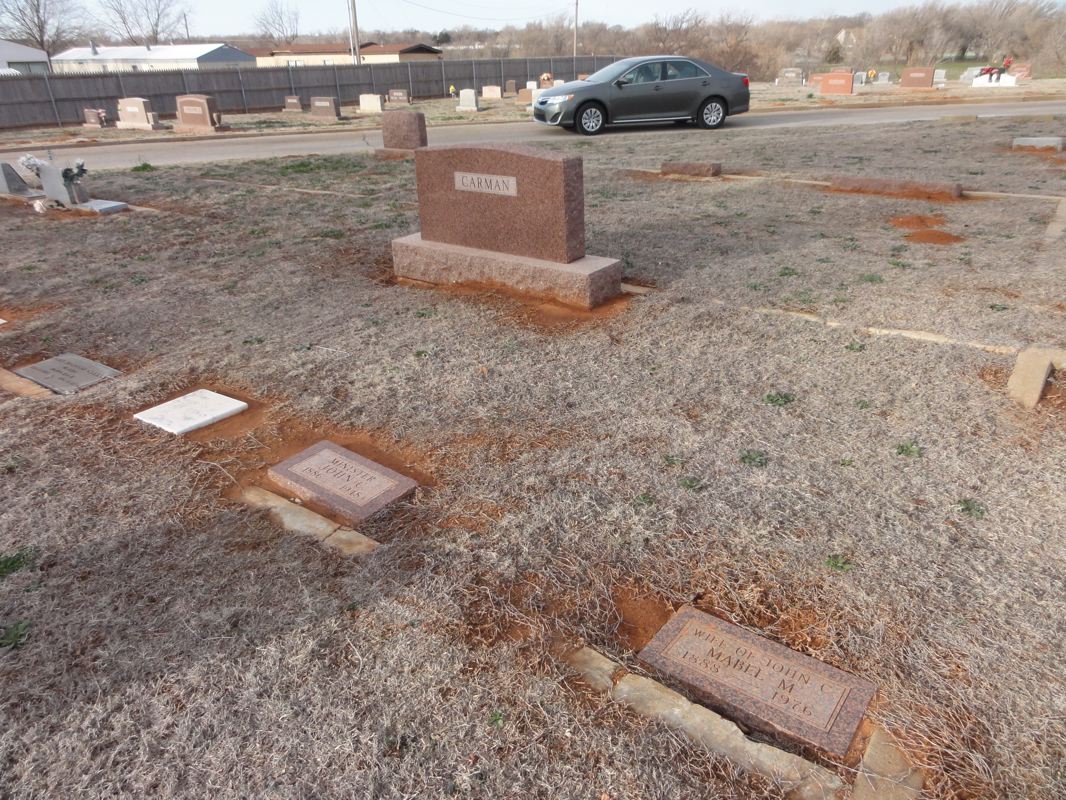 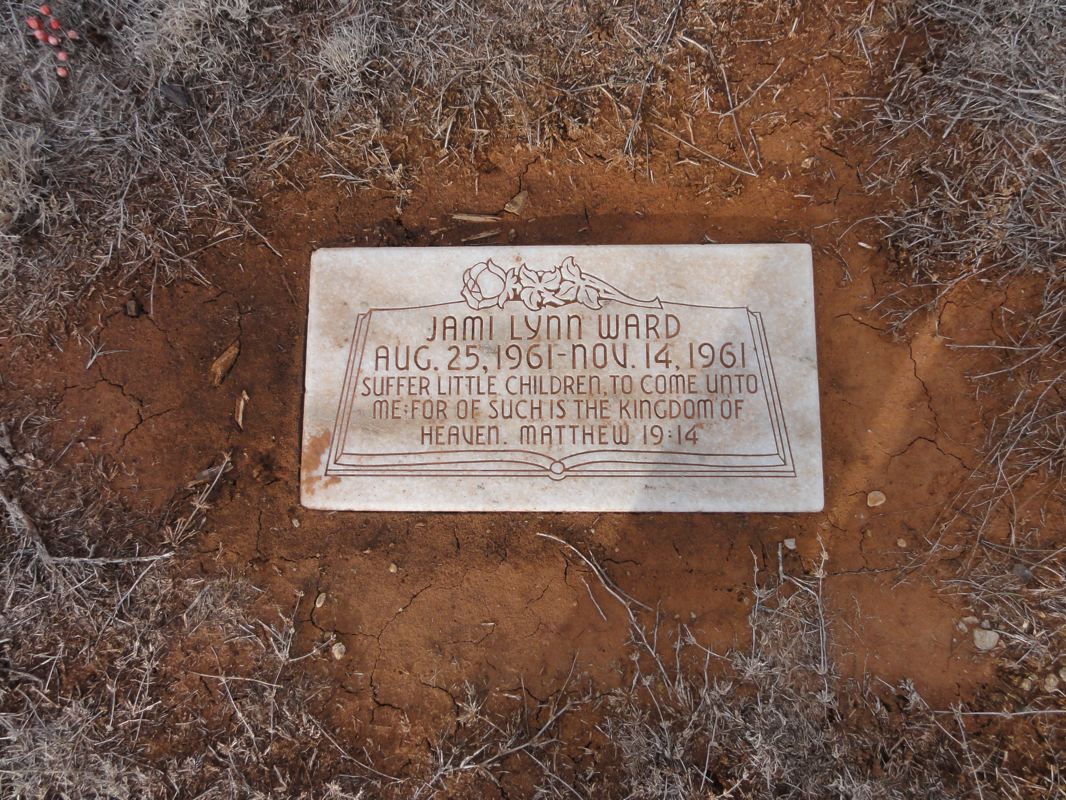 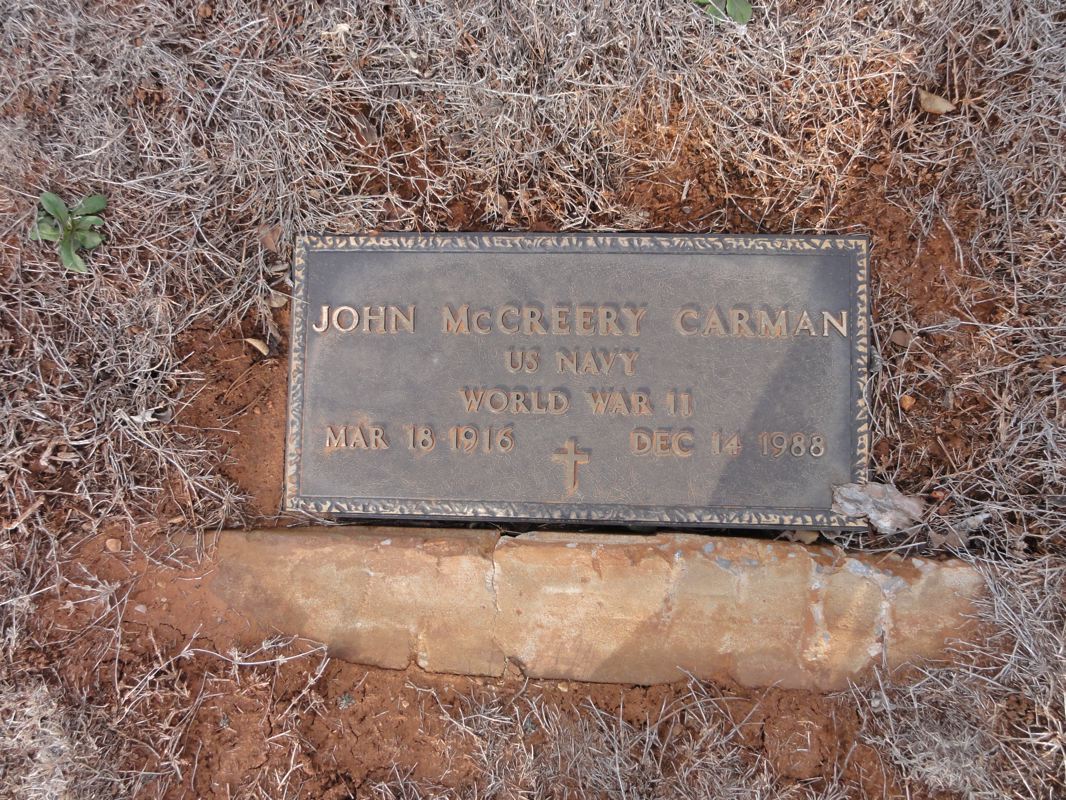 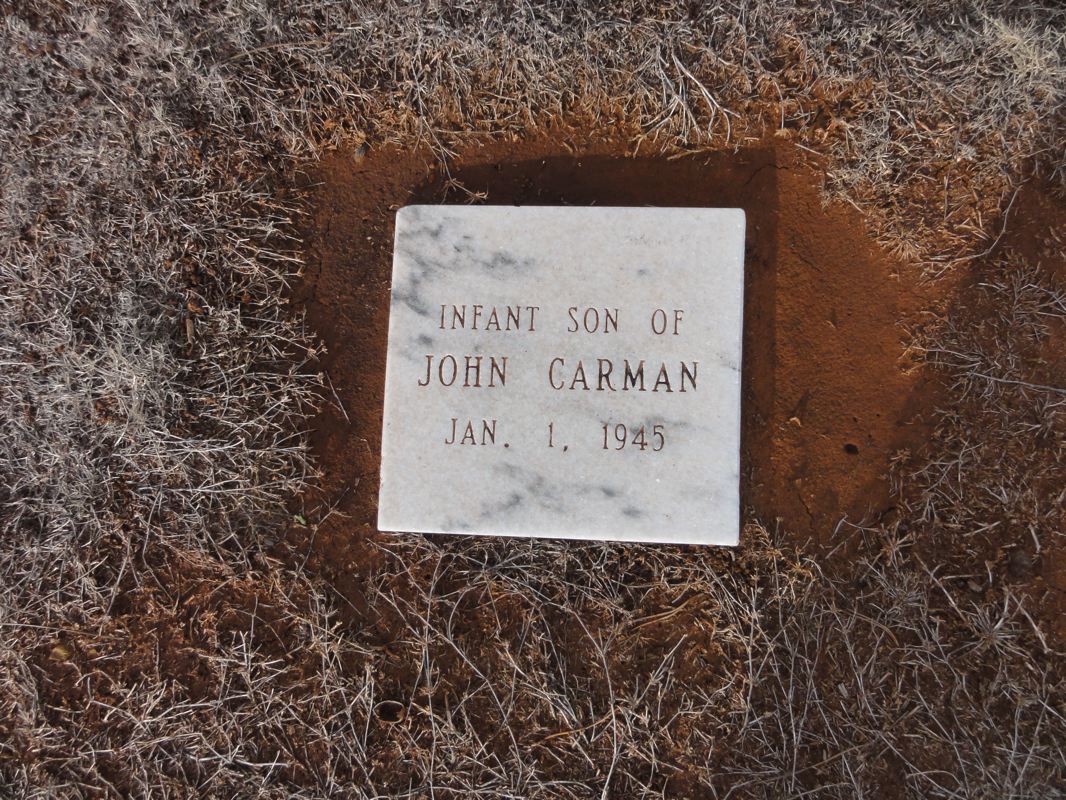 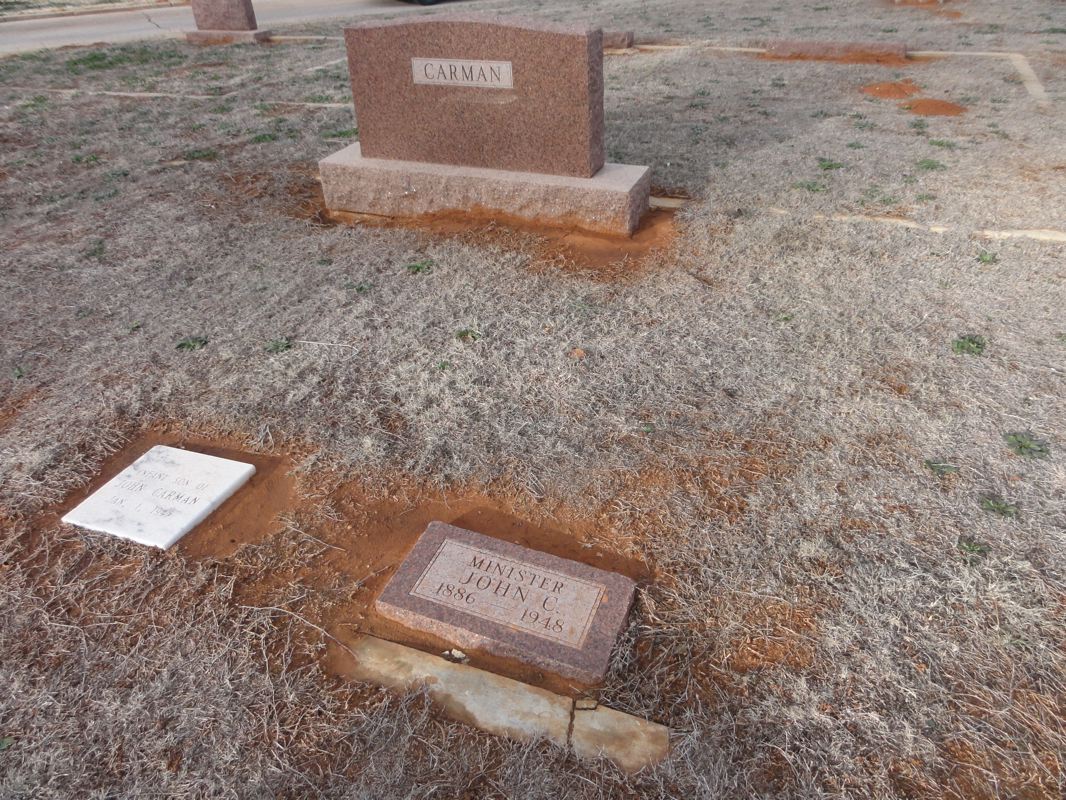 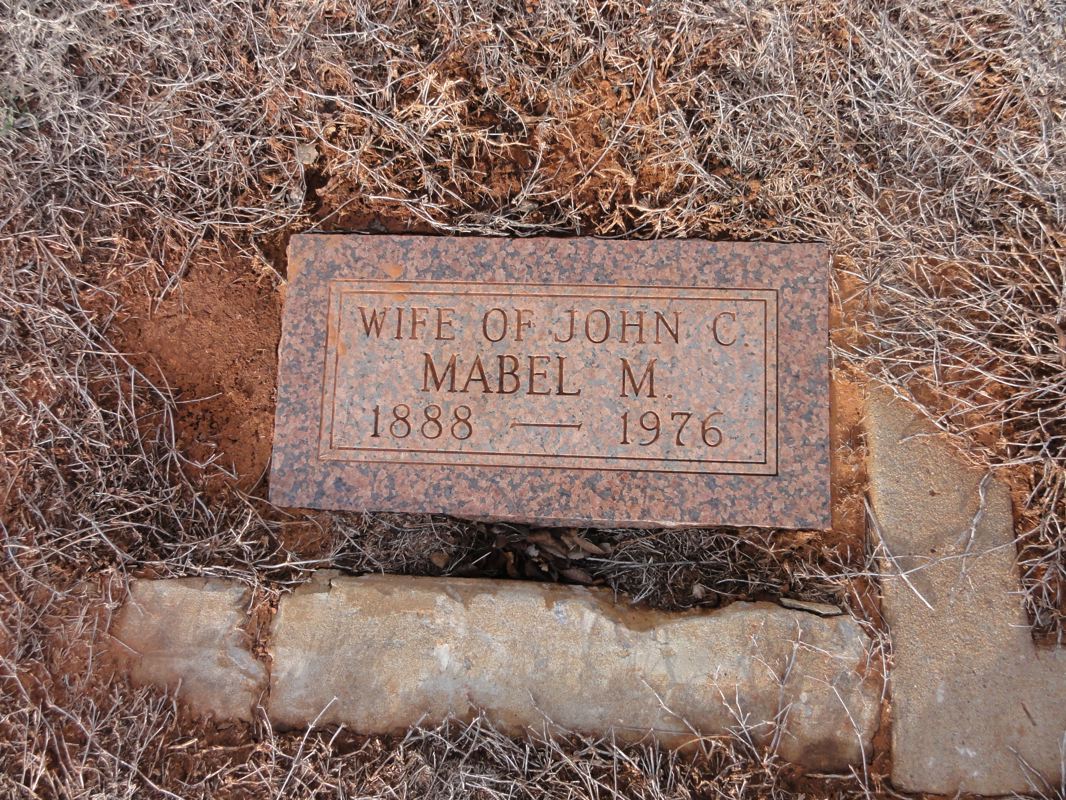 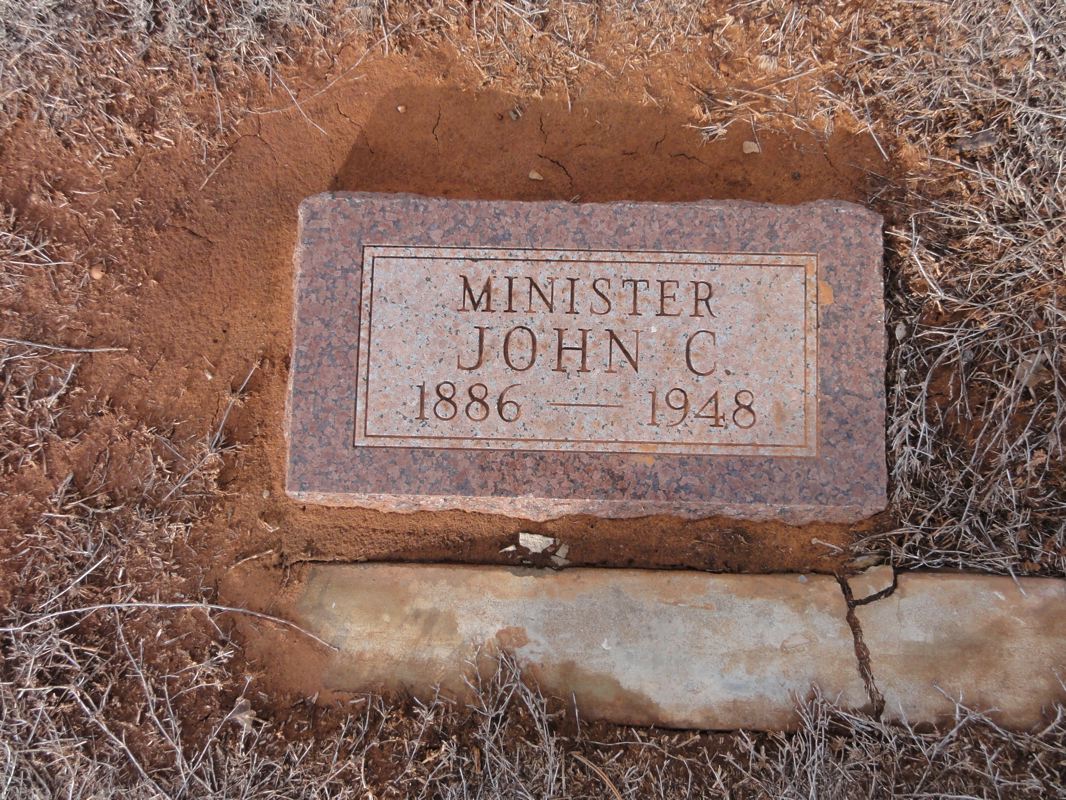 Web editor note: In February, 2012, it was my privilege to visit the grave of J.C. Carman. I was invited to take part in the annual Affirming The Faith Lectureship in Oklahoma City, Oklahoma. Getting into the area early, I was afforded the opportunity to put about 2000 miles on a rental car in order to locate graves of gospel preachers and church leaders of yesteryear in a wide area. My second day I was able to visit the grave of J.C. Carman.