Sketch On The Life Of A.C. Trent

Albert Claude Trent was born near Hammon, Oklahoma on March 19, 1913. His parents were Irven and Minnie Stinson Trent, a farm couple who were faithful Christians, In addition to Albert, they had two other sons, Carroll and Glen, both of whom are still living. Carroll has lived and preached in Arkansas for many years, where he is highly regarded as a gospel preacher and Christian.

When Albert was five years old, his father died, leaving the mother to rear these three small boys, which she did, faithfully bringing them up in "the nurture and admonition of The Lord." Her family, which included several sisters and at least two brothers, lived in the community, and helped provide the right kind of an environment for the Trent children. Albert did his grade school work at Pie Flat, a rural school near their home. For High School, he went to nearby Hammon, graduating there in 1931. He later did some college work in Harding University, and Southwestern University at Weatherford, Oklahoma. He earned a teaching certificate and taught some in Arkansas and Oklahoma. His relatives were faithful members of the Hammon church, and in Albert's boyhood the congregation in Hammon had a very active program among the young people, which no doubt helped keep many of their young people headed in the right direction. Some of my first preaching was by Sunday appointment with the Hammon church. (Twice monthly.) I became acquainted with the Trent boys and their family. They were all "the right kind of people." In August, 1926, when Albert would have been thirteen years old, he obeyed the gospel under the preaching of Dr. W.W. Brewer, who was preaching for the Hammon church.

Brother and Sister John Caffee were also faithful members at Hammon. They lost their daughter, Maude, in the "flu" epidemic in 1918. She had married Walter Stringfellow and they had had four children. One of them died about the time the mother did. The other three children went to Hammon to live with their grandparents. The oldest of these was Amy. She and Albert were in the same grade in school, and in their Senior year they began to date. She is not sure exactly when they decided to get married, but she went to Southwestern Teachers University at Weatherford, got a teaching certificate and began to teach, doing so for two years. The depression was "on," and getting worse all the time, so Albert had a hard time getting work. They had decided to marry, but the economic conditions made that very difficult and the wedding was postponed. Finally, on May 20, 1933, they drove from Hammon to Elk City where C.E. McGaughey said the words that legally bound them together for life. Three children were born to them, two sons and a daughter. They are: Barry, Sharon Jane, and James Alton. Both the boys are active in The Church, preaching from time to time. James is the Educational director for the Faith Village church in Wichita Falls, Texas (1985) Their daughter, Sharon, married Charles Waugh, and they live in Tipton, being very active in The Church there. Amy says Albert's "pride and joy" was their thirteen grandchildren and eleven great-grandchildren.

Albert was active in the work of The Church from his early youth. He always enjoyed being with preachers, and was much influenced for good by such men as Dr. W.W. Brewer, who baptized him, J.D. Pinkerton, who did local work in Hammon when Albert was quite young, and C.E. McGaughey, of nearby Elk City, who preached on the radio and held meetings all over the area, converting many people to The Lord. As a boy he "made talks" in the young people's meetings, and otherwise participated in the work of The Church. He continued his service to The Lord to the end of life.

It is rather difficult to determine exactly when he did start preaching. Amy says he was "making talks" as early as 1933, but he stated in Preachers of Today that he began preaching in Lincoln, Arkansas in 1940. Perhaps he had not considered it "preaching" until 1940. They had been married at least three years before he decided he wanted to make preaching his "full time" life's work. In 1941 he went to Sentinel in Southwestern Oklahoma to do his first local work. Many very significant things happened in Sentinel. The Church grew under his teaching and work. Due to a teacher shortage, he taught one year, and also coached the girl's basketball team. He strengthened his ties to the school and young people by serving as an official in basket ball games. While in Sentinel, he and B.G. Dobson, of nearby Hobart, worked together to establish The Church in Lone Wolf, a few miles South of Sentinel. He also began to sell books as a service to the brethren, and this grew into the Sentinel Book Store, which prospered from the first. (He later moved it to Hale Center, Texas, and then to Lubbock, where he sold it.) The store gradually took more and more time, and it came to the place where he felt he could not do justice to his preaching and also handle the book store, so he came to feel, that though the store would be more profitable, dollar wise, it could well cost him his soul. In 1949 he moved to Weatherford, Oklahoma, where he preached and attended Southwestern University, but after a year of this he moved back to Sentinel, where he served for a total of fourteen years. Most of his work was in Southwestern Oklahoma, though he did preach at Hale Center, Cotton Center, and Shallowater in West Texas. In addition to Sentinel and Weatherford, he also preached in Hollis, Mangum, Frederick, Hinton, Tipton, Temple, Oklahoma City (Shields Blvd.) and Erick. Perhaps there has been no preacher that is as widely known in that area, or that has done as much good there as Albert Trent. Erick was destined to be his last work.

In his local work he did radio work when it was available, held many meetings, married the young people, buried the dead, the usual work of a gospel preacher. He did some writing, and left some fine teaching material in "Lessons and Sermons on the Home," and "Charts and Sermon Outlines." This material is still available, and can be had by contacting Sister Trent who will soon be moving from Erick to Tipton. (Nov., 1985) Along with this teaching material, he prepared and used much flannel graph material, adapting it to pulpit use.

Albert was always a pleasant person, always with a smile that was genuine. A little girl where he once preached told her mother that "Brother Trent smiles, even when he is yelling." He was immaculate in his personal habits. Amy said: "I never saw him come out in the mornings, unless he looked the same as when you saw him in the pulpit." When he was asked in the last years about retirement, he always replied that he would not retire as long as he could keep going. He did just that, worked to the very end.

On Sunday afternoon, September 1, 1985 he went to the meeting house to get things ready for the evening service. (He always went to the building at least an hour before time for the service.) While there he became very ill, suffering severe pain in the lower abdomen. He called Amy. An ambulance took him to Sayre, and after some work there, the Doctor sent him on to Elk City, where some surgery was done. All the while he was in severe pain, and it was quite some time before they were able to get the pain under control. Surgery was done in Elk City. He had lost much blood, and though he was given eighteen pints, they were still unable to save his life, and about seven the next morning, The Lord called him "home". J.T. Marlin and Clyde Freeman, two close friends across the years, conducted the final service in Sentinel, a place he loved dearly. The body was taken to the Elk City cemetery, and sleeps there awaiting the call of he Lord. Albert Trent was a good man, one of the very best in every respect. We should all rejoice in the great victory he has won! Let us pray God's blessing upon his faithful companion and their children and grand children, praying that some day they can all be together in that better land.

Directions To The Grave Of A.C. Trent

Albert Claude Trent is buried in Elk City, Oklahoma in the Fair Lawn Cemetery. Elk City lies west of Oklahoma City about 110 miles. Travel on I-40 to Exit 38, (Hwy. 6, S. Main St.) and turn north. Go through town, the road will become N. Main St. The road will dead end into W. Country Club Blvd. Turn left on W. Country Club Blvd. Go one block, and turn right on N. Washington Ave. (There was a funeral home on the corner when we visited in October, 2004). Travel out N. Washington Ave. until you see the cemetery on your left and right. Trent is on the left side of the road up from the cemetery office. Do not enter at the office. Go further down toward the center of the cemetery and enter where the flag pole will be just ahead of you. The little roads are named after flowers. Enter on Iris. It will "T" into Daisy, turn right and go to left on Violet. Trent's grave is on Violet. Go west until just where you see the road that goes to the left and stop. Enter Block J about three or four stones in from the street. The preachers buried in this cemetery include: Dr. W.W. Brewer, John C. Carman, M.A. Mansur, and Albert C. Trent. 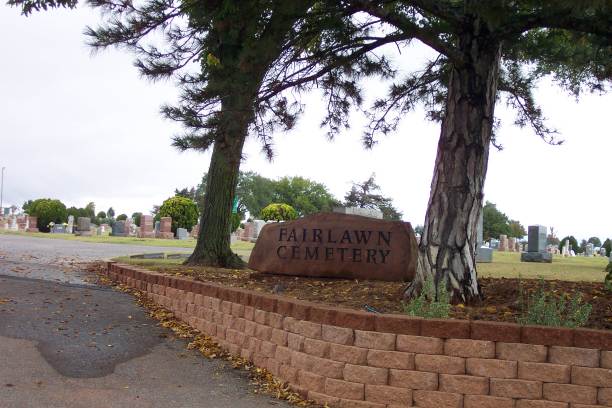 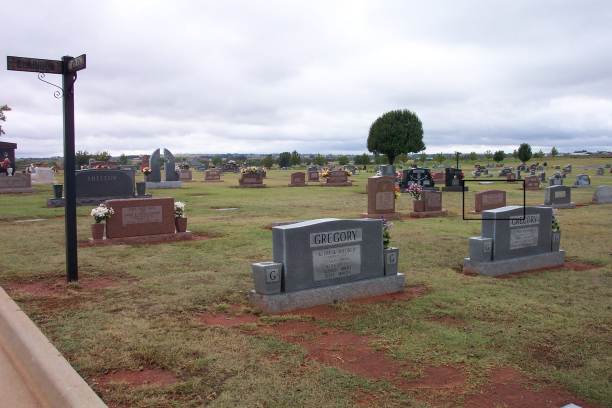 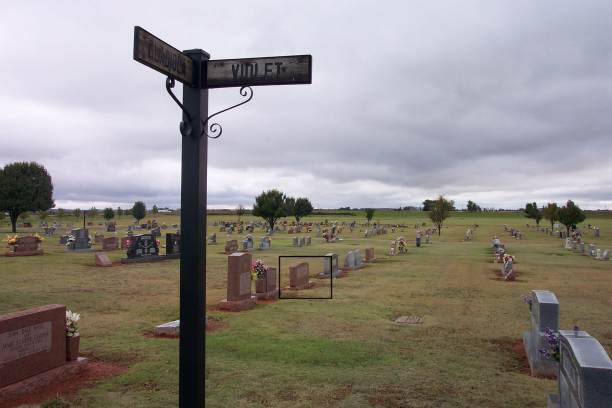 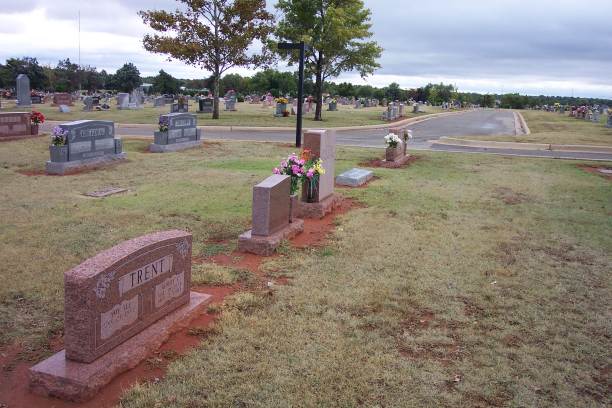 Looking Back Toward The Flagpole, Upper Left, Get Your Bearings If Visiting The Monument 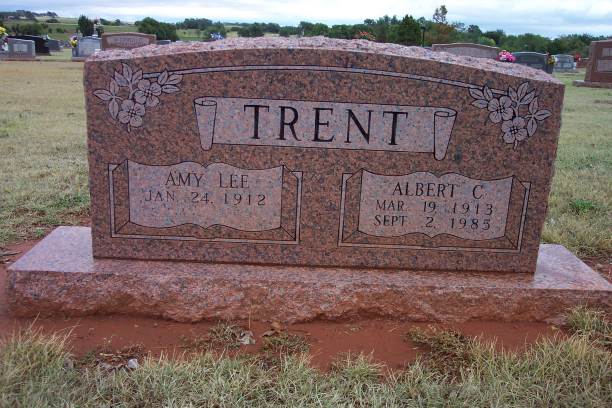 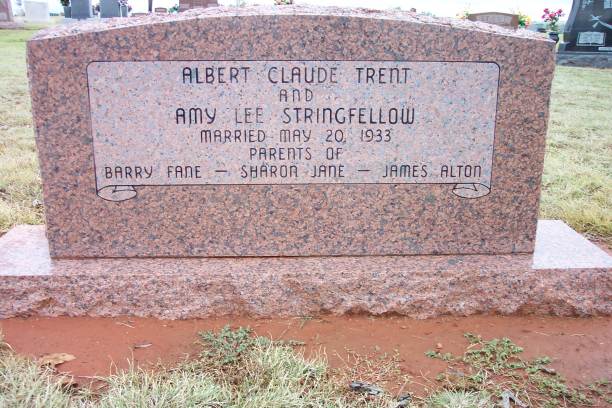 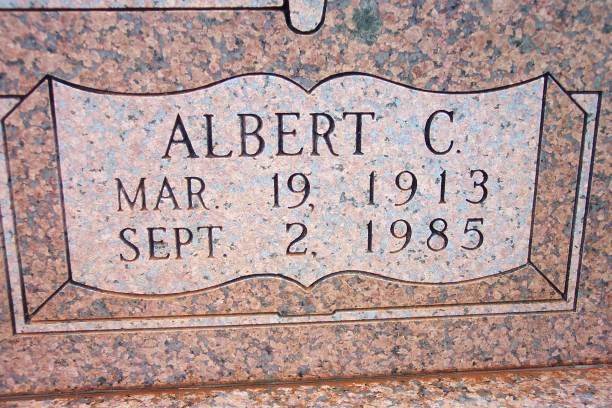