David Lipscomb was born not far from Davy Crockett's Old Kentuck farm, on Bean's Creek, in the Old Salem Community, Franklin County, Tennessee, January 21, 1831. His parents were Granville and Ann Lipscomb. He, and his older brother William,

attended Franklin College in 1846 under the tutelage of Tolbert Fanning, and he graduated in 1849. After graduating he spent a couple years in Georgia, helping with family business. In 1852 he moved back to Franklin County, Tennessee and helped in the building of the railroad between Nashville and Chattanooga. On July 13, 1862 he married Margaret Zellner. One child was born to this union, Zellner, born in September, 1863. He died at nine months of age from severe dehydration from teething. He is buried in the Hughes Cemetery, off Santa Fe Pike in Maury County, Tennessee. In 1866 David Lipscomb began as co-editor of the Gospel Advocate with Tolbert Fanning. In 1891, with the help of J. A. Harding and others, he founded the Nashville Bible School, now Lipscomb University. The university now sits on the old Lipscomb farm, Avalon, on Granny White Pike, Nashville, Tennessee.

He was a very intelligent man who was soft spoken, but greatly convicted in his beliefs. He, by far, had more influence on the churches of the south through his work in the Gospel Advocate than any other preacher of the gospel during his lifetime. He died November 11, 1917 at the age of 86. Brethren, E.G. Sewell, J.C. McQuiddy, E.A. Elam, and C.A. Moore conducted the funeral at the College Street Church. He was laid to rest in the cemetery at Mt. Olivet. Through his efforts in the Gospel Advocate and Nashville Bible School, it could be said that he was the most influential man in the Restoration Movement in the Southern United States in the late 19th and early 20th centuries.

This brief summary of David Lipscomb's life is just to introduce an amazing man of God. Below you will find chronology of his life. At least two biographies have been produced on the life of David Lipscomb, one by Earl West and the other by Robert Hooper. At this writing they are still in print and can be obtained through the Gospel Advocate Company in Nashville, Tennessee. 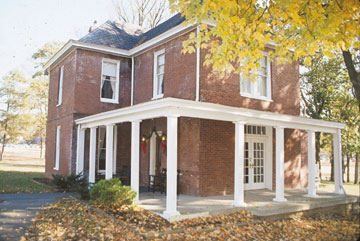 "Avalon" was the family home of Uncle Dave and Aunt Mag Lipscomb. Sixty
acres were given to Nashville Bible School In 1902. It became the permanent home
of Lipscomb University in 1903. 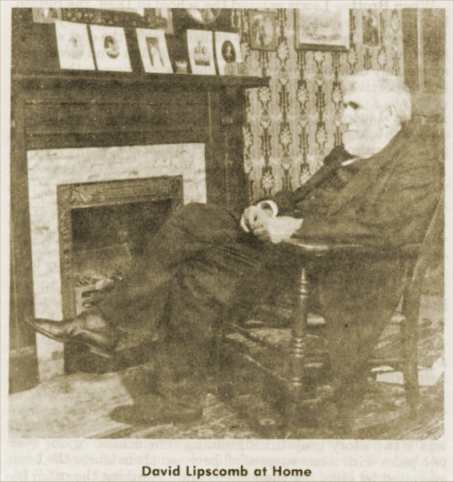 Chronology Of The Life Of David Lipscomb

1828
Spring
Granville remarries Nancy, an older cousin from Virginia. (“Nancy” according to Earl West, p.26; “Ann,” according to Hooper, p.20)

1834
May
Beginning of the church of Christ at Old Salem, Franklin County, Tennessee

1846
January
Entered Franklin College in Nashville along with brother, William. Greatly influenced by teaching of Tolbert Fanning (the second class since its inception in 1845 – 136 pupils in the school that year – and closed in 1861 with the beginning of the war.)

End Of Year
Returned to Nashville – Lived with brother, William

1855
July 23
Secretary of cooperation meeting in Mountain District of Tennessee.

1857
Spent much of the year preaching around McMinnville, Tenn. Preaching – then moved to Davidson County and purchased a farm with William

1858-1861
Preached mostly in central Tennessee and closer to Nashville

1859, 1860
The instrument added at Midway, Ky, marking the beginning of digression in worship practices

December
Closing down of Gospel Advocate due to cancellation of mail service and paper products.

1862
July 23
Married Margaret Zellner, One child, it died in infancy.

1864
Early in year
Moved to farm in Nashville

April 9
General Lee surrenders at Appomattox, signaling the end of the Civil War

1866
January
Revived Gospel Advocate, which had been forced to suspend publication during the Civil War, and became its editor. Published long series of articles on the Christian's relation to civil government. Continued as editor of Gospel Advocate for more than forty-five years.

Spring
David was ill much of the time – stomach troubles

1868
Oct./Nov.
Made a preaching tour in Georgia

1869
January
GA adds the prospectus of a new Kentucky paper, the Apostolic Times – not very excited about having the competition, but acknowledged its presence. In the 4 years of its publication, GA saw American Christian Review in Anderson, Indiana and Christian Standard in Columbia, later Cincinnati, OH as its major competitors

End of year
After a 1½ years of good health, stomach problems return

1870
Lipscombs move from Bell’s Bend to Edgefield to be nearer the offices of Gospel Advocate. Started a congregation that met at Odd Fellows Hall.

Moved back to farm at Bell’s Bend

1873-1874
Due to Cholera outbreak in the summer, ‘73, Lipscomb helped relieve the poor in the city. As a result he comes down with the disease, and takes much of the spring of ‘74 to overcome it – much hemorrhaging in the lungs etc – a very sick man

1875
Met Benjamin Franklin, ed. Of American Christian Review, for the first time when Franklin visited Franklin, Tn in a meeting. – Represented the meeting of two giant influences in the brotherhood. Franklin’s paper was often referred to as the Gospel Advocate of the north.

Death of Anna Lipscomb, wife of William. Their children came to live in the David Lipscomb home at Bell’s Bend except son, David, who had moved in with his Uncle Dave and Aunt Mag five years earlier

1876
January
Moved back to Nashville

September
Moved back to Bell’s Bend for harvest time.

1878
October 22
Death of Benjamin Franklin, a blow to Lipscomb as he considered it a loss of a great ally in the battle against organized societies.

December
Struck with a nearly fatal illness – a cold that turned to a constant cough for two months. He thought his days were numbered. Well into summer of ’79 before he began feeling well. Most work of year was writing. Only began preaching again in August with visit back to Salem, August 31

1880
June
Republican Convention, James A Garfield nominated president, much to the disappointment of Lipscomb, due to his anti-involvement of Christians in Civil matters; wrote editorials in GA against it, bringing strong condemnation of Garfield supporters

1881
September 19
Death of President James A. Garfield, the object of much difficulty to Lipscomb due to his ongoing stand against Christian involvement in civil matters.

J.W. Higbee of Madisonville, Ky begins editing a column called, “Church, Field and Home” – The following year he steps down due to articles in Gospel Advocate denouncing the Missionary Societies, of which he was a proponent

Controversy over more than one loaf in the Lord’s Supper arose – discussed in GA, page 280 (1902-p.233 discusses more than one cup)

1883
Helps raise $10,000 for Fanning Orphan School. He and twelve others constituted the Board of Trustees.

Purchase of 110 acre farm “Avalon” on the edge of Davidson County on Granny White Pike – Dairy farm – Moved there the following year – Lipscombs spend the rest of their lives there.

33% increase in circulation of Gospel Advocate

Parting of the ways of relationship between Gospel Advocate and Isaac Errett’s Christian Standard after editors publish letters of dispute over distribution of church hymnals.

August, Sept.
Gospel Meeting at Winchester, Ky, home of James A. Harding, preached 17 sermons – also visited McGarvey and Grubb in Lexington and a trip to Louisville

September
Beginning of Texas paper, Firm Foundation by Austin McGary - beginning with a long-running discussion on rebaptism, embroiling both it and Gospel Advocate as mediums exposing the divergent views.

December 23
Departs for rest and preaching tour of Texas

1884-88
Struggle among Texas churches over missionary society question. Lipscomb wrote extensively on the questions of congregational cooperation and missionary organizations.

Spring
After return from Texas announced that GA was taking over Texas Christian, a paper edited by C.M. Wilmeth, bringing total of GA subscriptions to 6700

1888
January 1
Lipscombs place membership at South Nashville. Lipscomb served as an elder here for many years.

Spring
F.D. Srygley finishes his manuscript on Larimore and His Boys and later printed by Gospel Advocate

May 27
Served as moderator for James A. Harding in famous Nashville debate between Harding and J.B. Moody (Baptist) – 16 nights – Over 100 people baptized in Nashville area in following weeks

Summer
Beginning discussions with Harding about opening a school in Nashville

1890
June 29
Jesse L. Sewell died in Viola, TN and within one year David produced a biography on his life.

Tennessee Christian Missionary Society organized by A. I. Myhr in Chattanooga. Meeting meets in Nashville in 1891, 1892 – much to the discouragement of Lipscomb

Spring
Lipscomb produced a 64 page tract on Christian Unity, How Promoted And How Destroyed, Faith And Opinion

Editorial debate with Austin McGary on the question of "rebaptism."

October 5
Nashville Bible School established on Fillmore St. with 9 students. Faculty consisted of Lipscomb, Wm. Lipscomb, and James A. Harding. Lipscomb later wrote, "I have found more satisfaction in teaching the Bible to the young men and women at school than in any work of my life."

Fall
Began being concerned at teaching of R. Lin Cave, son-in-law of W.H. Hopson. His views on the Godhead led to parting of relationship with Lipscomb by 1896

1893
April 11, Sunday
Suffered an accident when his horse drawn buggy was overturned as a result if the horse being spooked as they were crossing a railroad track. Lipscomb was severely hurt, being thrown from the buggy – His recovery is slow.

Fall
J.W. Grant teaching math and Dr. J.S. Ward teaching Chemistry were added to the faculty at NBS – third session of the school

Nashville Bible School has its first permanent location at cnr. Of South Spruce and Olympic Streets. Continued through Spring 1903 when campus moved to “Avalon,” present location of Lipscomb University

1897
J. N. Armstrong added to the teaching staff at NBS

1899
Division in Nashville churches was complete. GA reports that the Woodland St. church is most digressive in Tennessee. It and Vine St. churches aligned themselves with society support, also adding the instrument to their worship

Nashville Bible School is incorporated. David serves as its first Chairman of the Board of Trustees—Never serves as president of the college.

ver next eighteen months appeared regularly on the witness stand for court case over the ownership of the Newbern, TN church building that had split over the instrument. Finally settled in favor of the instrument and society group in April, 1905.

Franklin College And His Influences, edited by James Scobey is published

1909
Death of Aunt Fannie Van Zandt. Lipscomb called her, “the mother of the church at Fort Worth.”

1915
June
R.H. Boll replaced by J.C. McQuiddy as Front Page editor due to his premillennial views, but was temporarily reinstated later in the year

1979
November
Crying In The Wilderness: A Biography of David Lipscomb, by Robert E. Hooper is released

The David Lipscomb family plot is located in one of Nashville, Tennessee's oldest and most famous cemeteries, Mount Olivet. Many famous and wealthy Tennesseans such as, Thomas G. Ryman and others are buried there. To those in Churches of Christ, what makes this cemetery so famous are the numerous men and women of the Restoration Movement who are interred there. Lipscomb is buried in Section 14. The cemetery is located on Lebanon Pike in Nashville. From the city take I-40/24 to Exit 212/Fessler's Lane and turn left. Go down to the bottom of the hill and turn right on Lebanon Pike. The cemetery will not be far up on the right. If you are heading into town, take Exit 212 and turn right on Green, and it will run in to Lebanon Pike. Turn right on Lebanon Pike, and the cemetery will be up on the right. Nearly 40 Restoration Movement preachers are buried in this cemetery. Have a look at the map of where they are buried below. 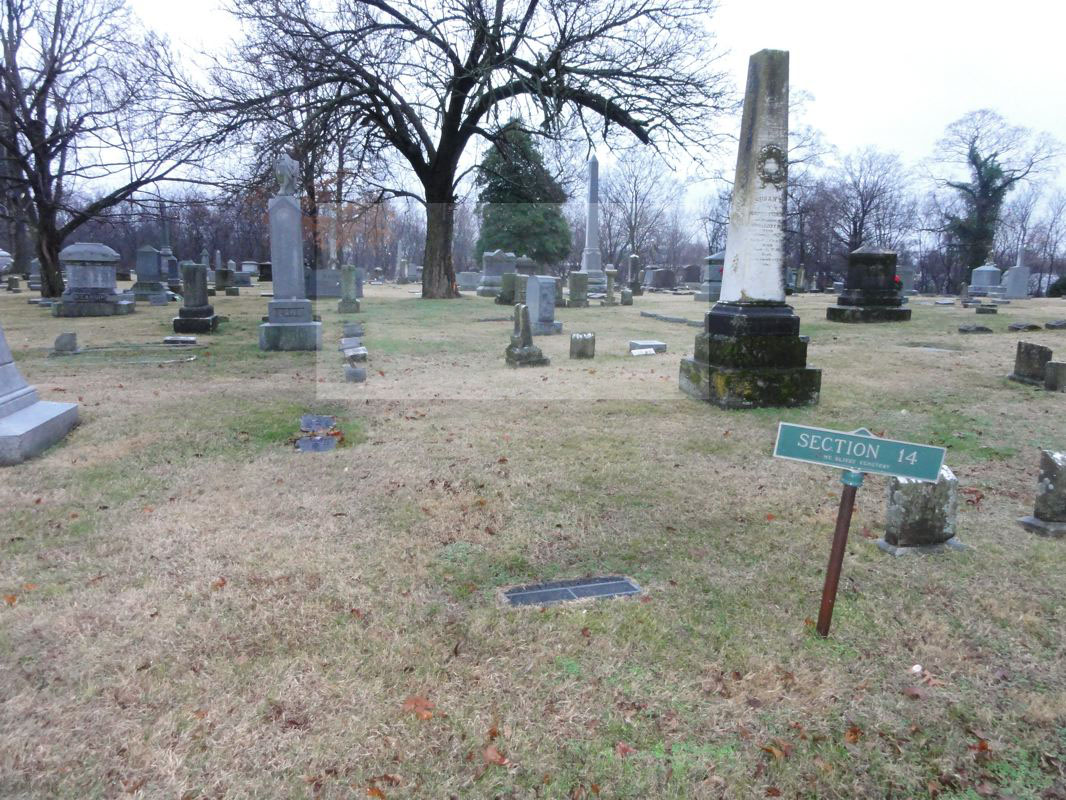 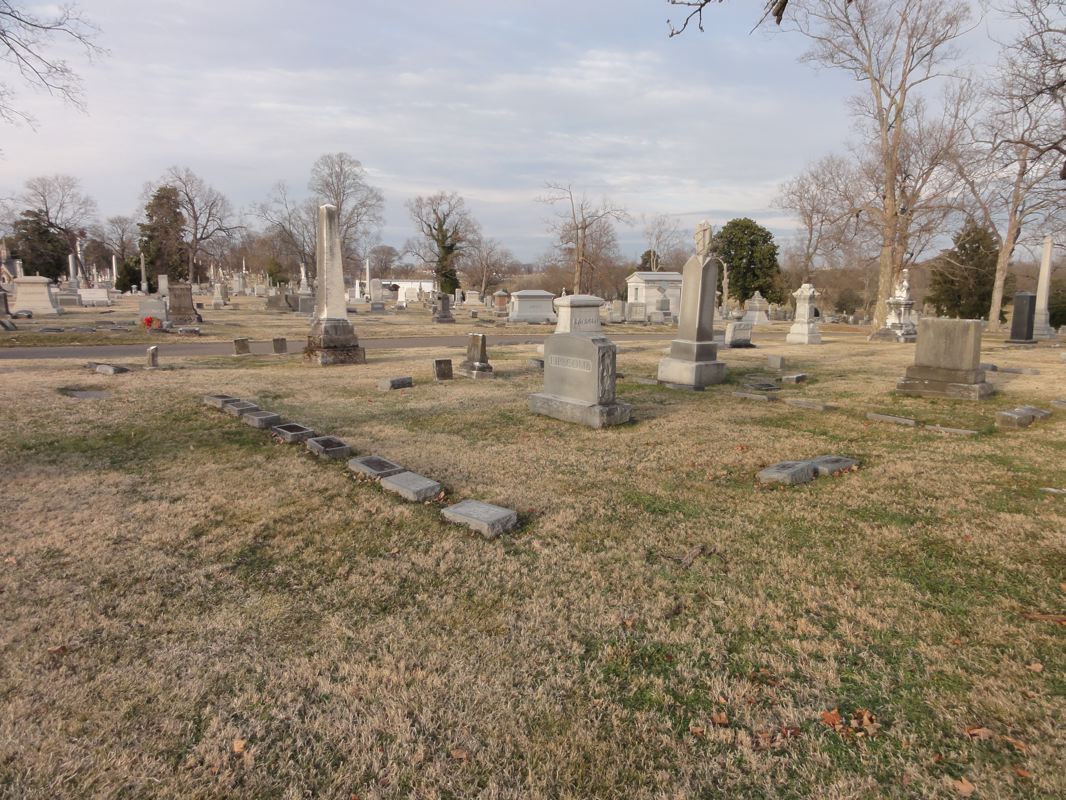 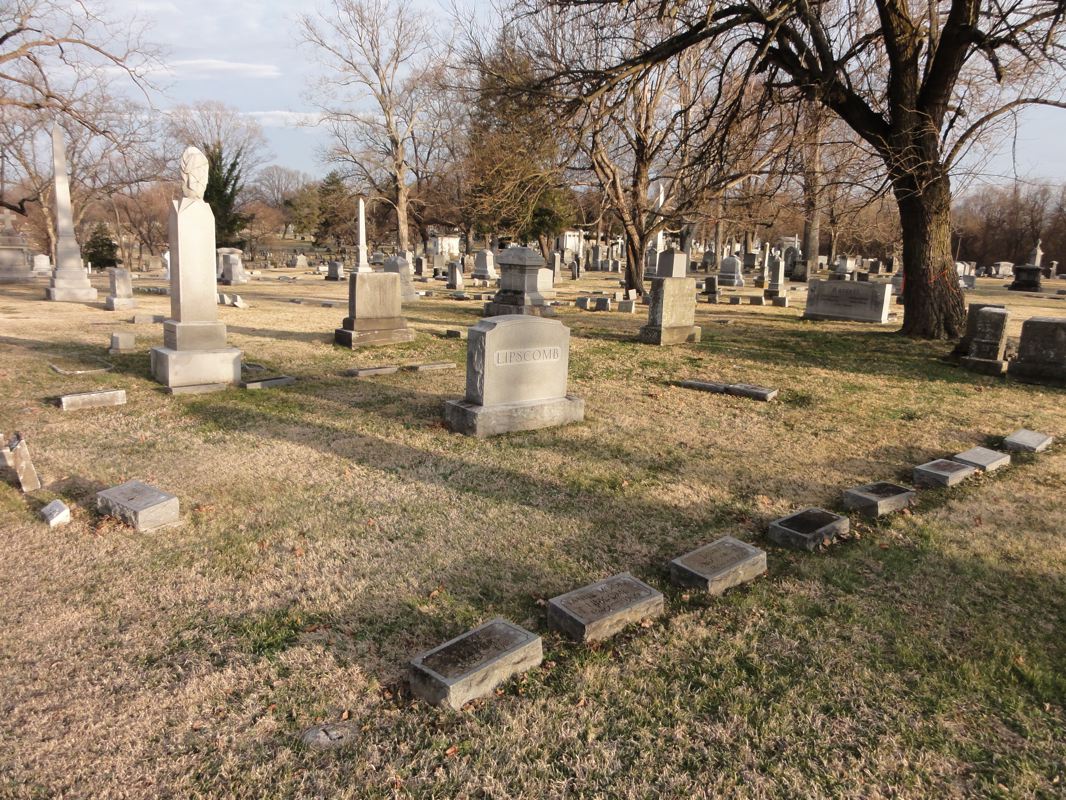 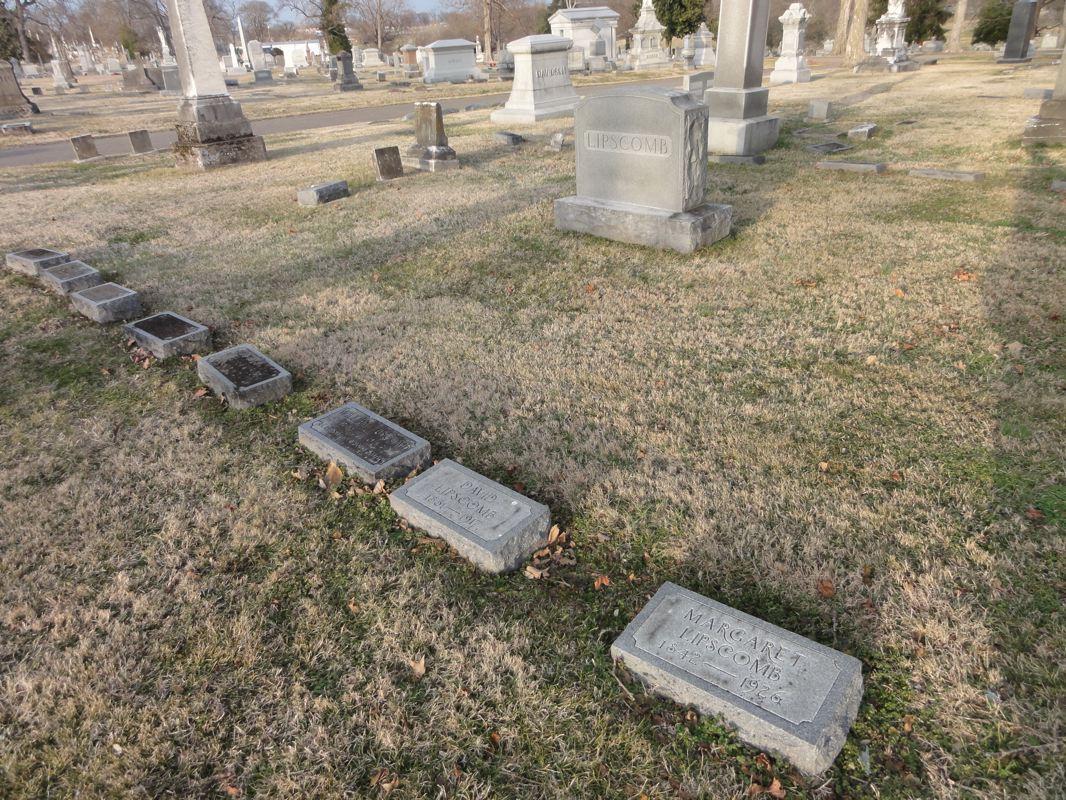 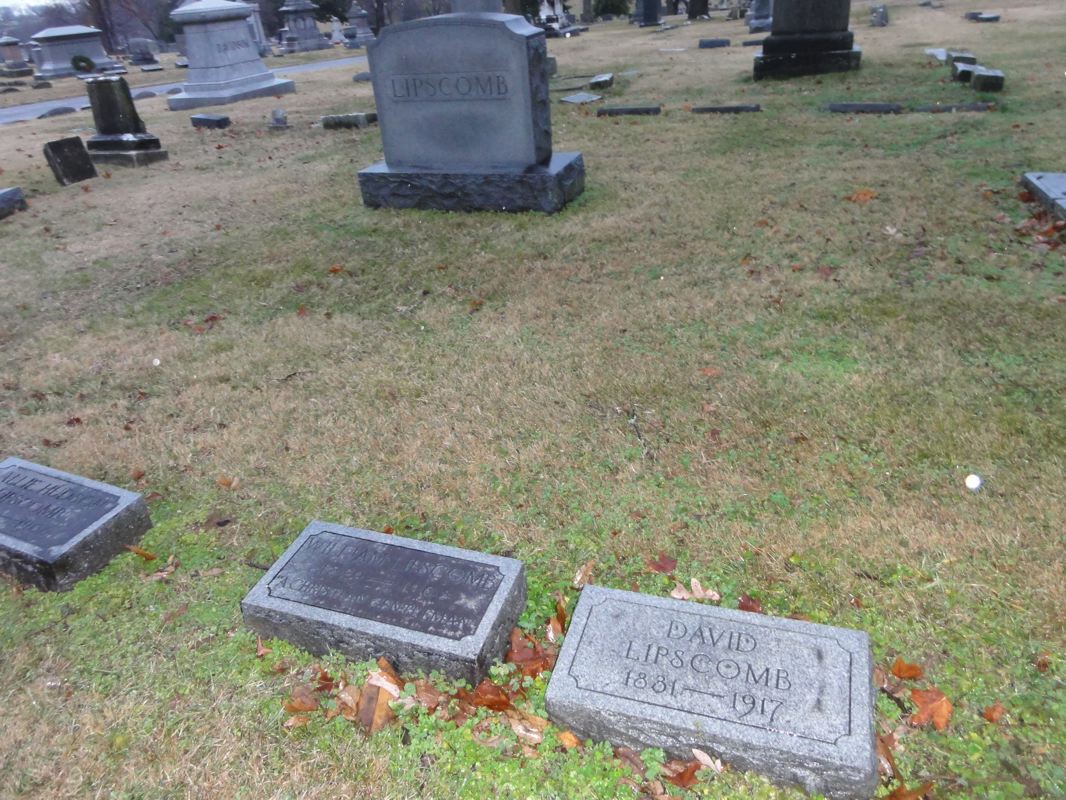 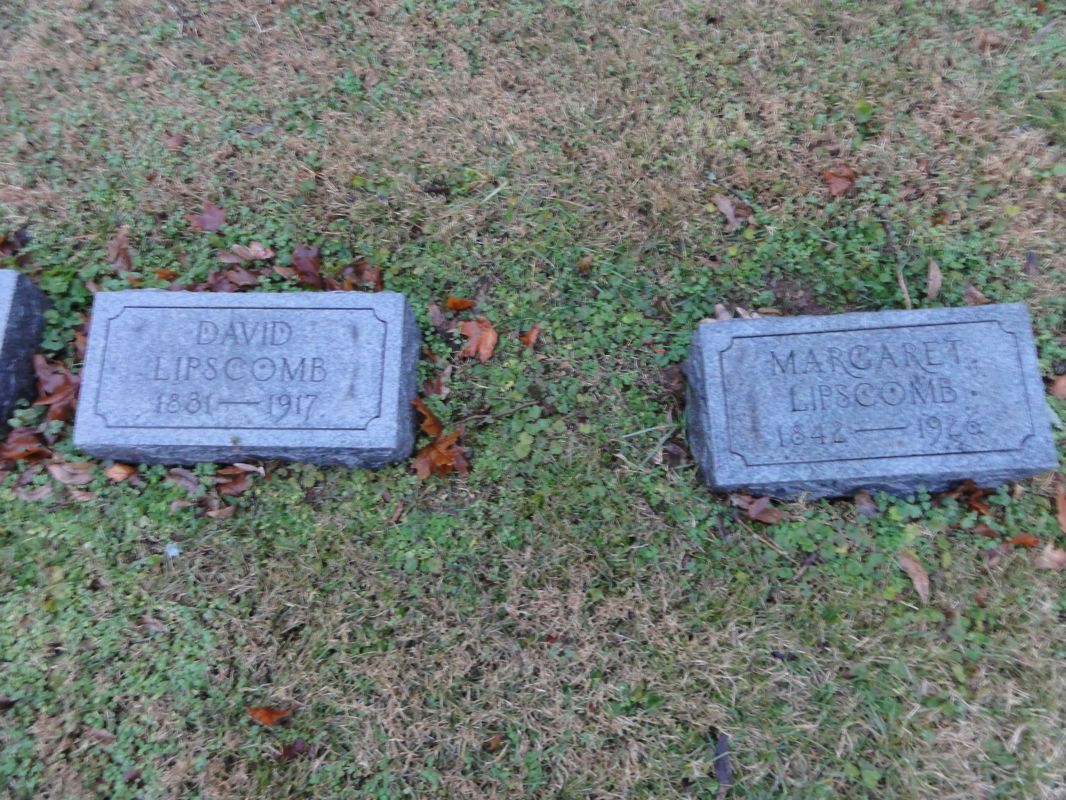 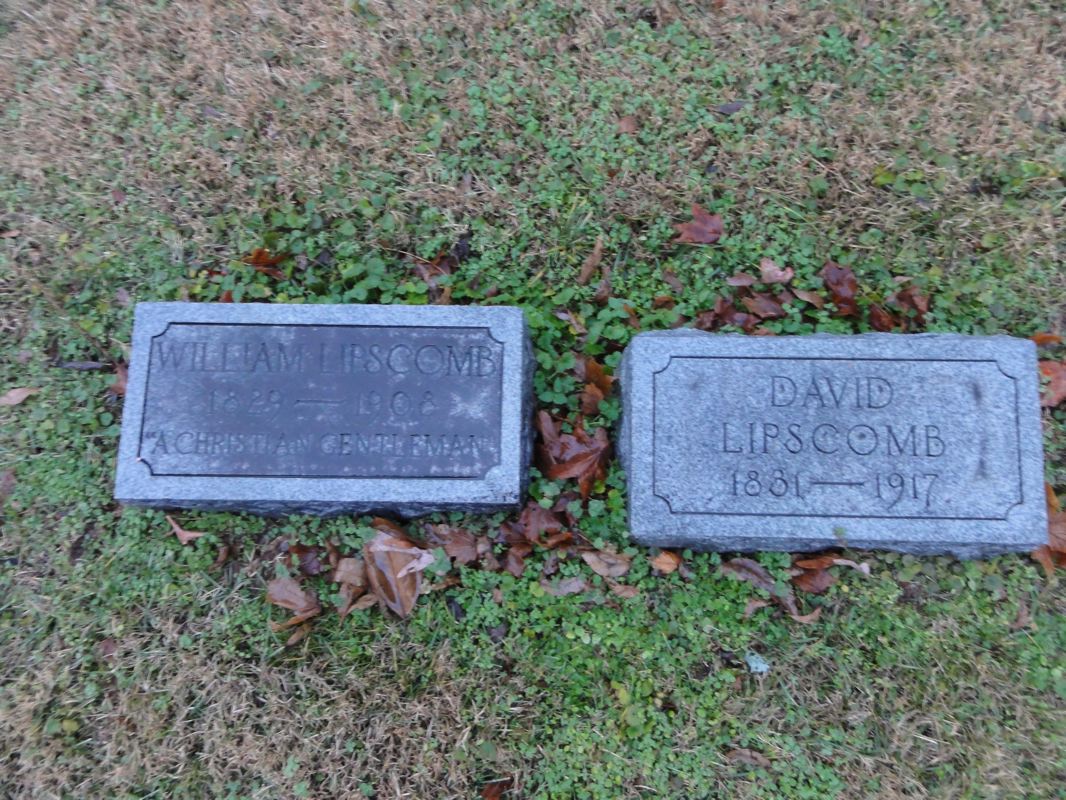 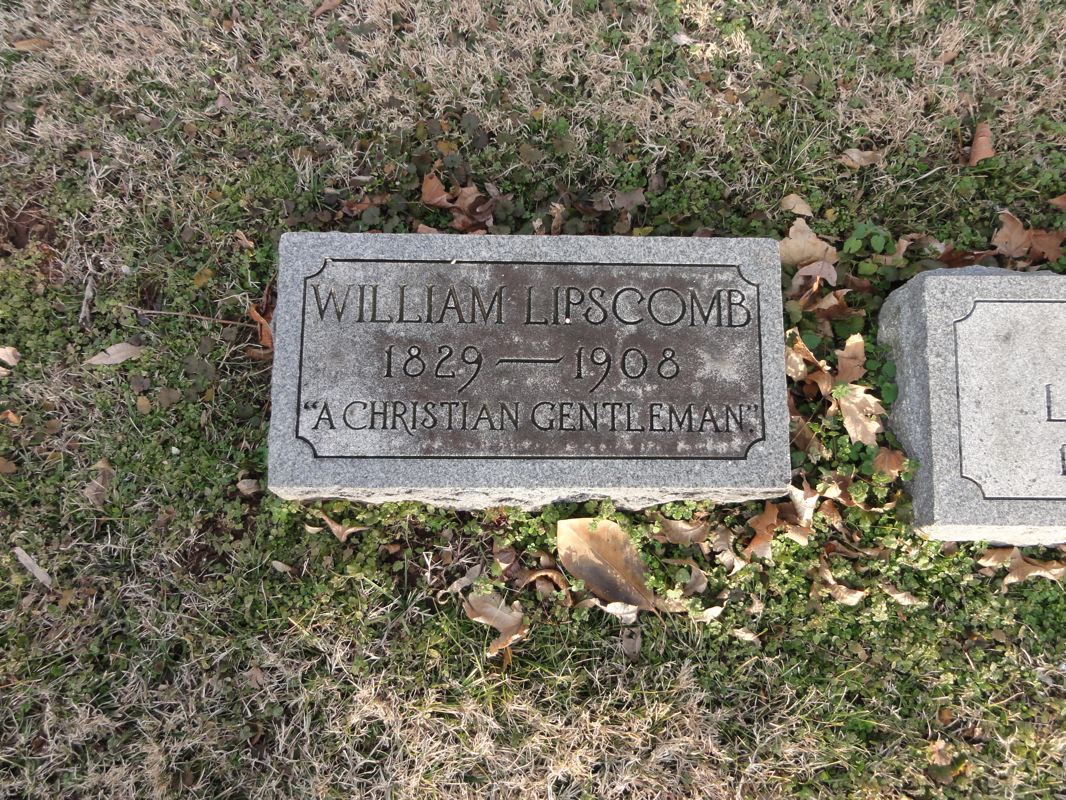 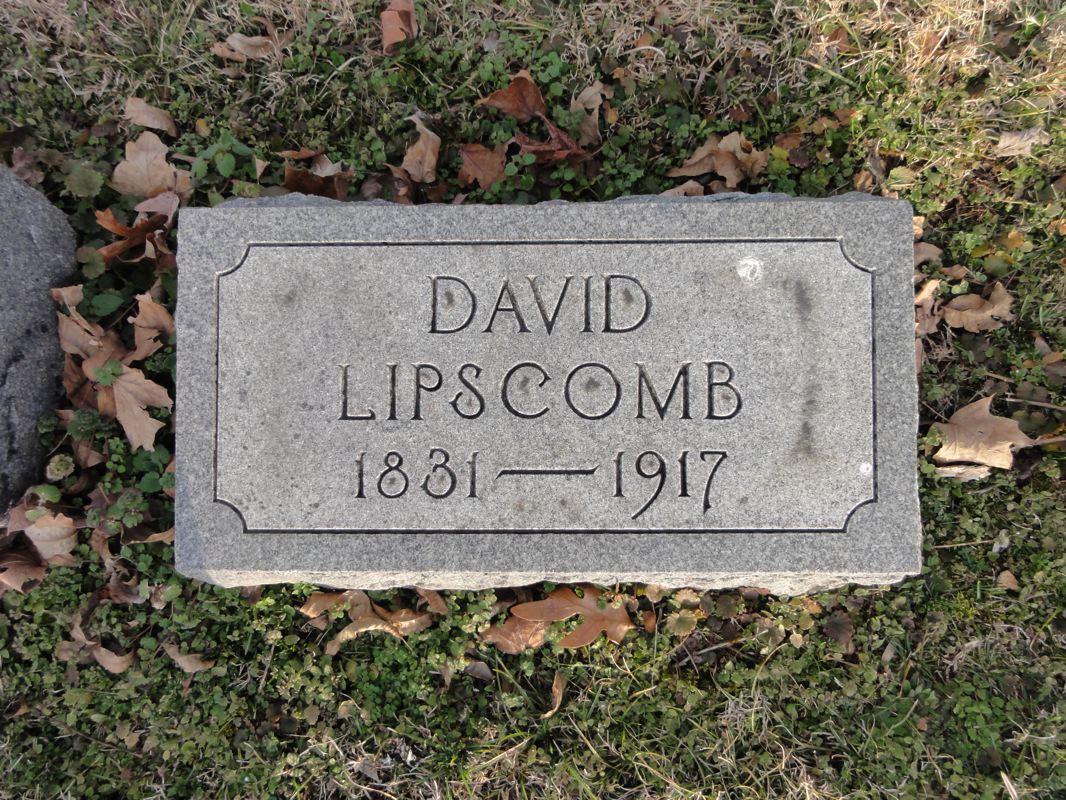